Do you remember a few weeks ago, I invited you sweet readers to join me in blogging, right here on my blog?  Yeah, not to take over the blog…..but to fill in the gaps that I’m not using anyway?  Some of you would have fun here, I just know it! :)  (If you have no clue what I’m talking about……read this entire post.  It may put a few dollars in your pocket!)  I have had a huge response so far.  As in, I still haven’t read through every form. (But I’m close!)  But don’t let that deter you from signing up.  I can always hang onto them and pull from them when needed.  Anyway, if you’re interested, you have until Dec 15th to fill out a form.  And then sometime next week, I’ll be in contact with several of you (I’m still trying to work out the details of how many)……to see if you’d be interested in hopping on board, starting in January.  Sound fun?

I have something super simple to share today.  That would, ahem, also make a GREAT Christmas gift!  (Shout out to all the slackers out there……who are on my procrastinator team!)  And the idea come from watching my 5 year old, Connor, fascinated with magnets.  He loves to build, construct, watch pieces fit together………and then destroy!  Destruction is in the male gene, I’m sure of it.  (Just like car sound effects are in the male gene.  If you’re a female, go on, try to make a really cool semi truck sound.  Are you as lousy at that as I am??  My husband thoroughly enjoys teasing my attempts at sound effects.  Boo to him. ;) )

Anyway, back to the magnets.

I have been wanting more creative toys that Connor can play with, especially when he’s having quiet time (which is solo play, in his own room…..after lunch).

So, I bought some wooden pattern blocks…..and some heavy duty magnets.  And I’m going to let this kid create his little heart out. 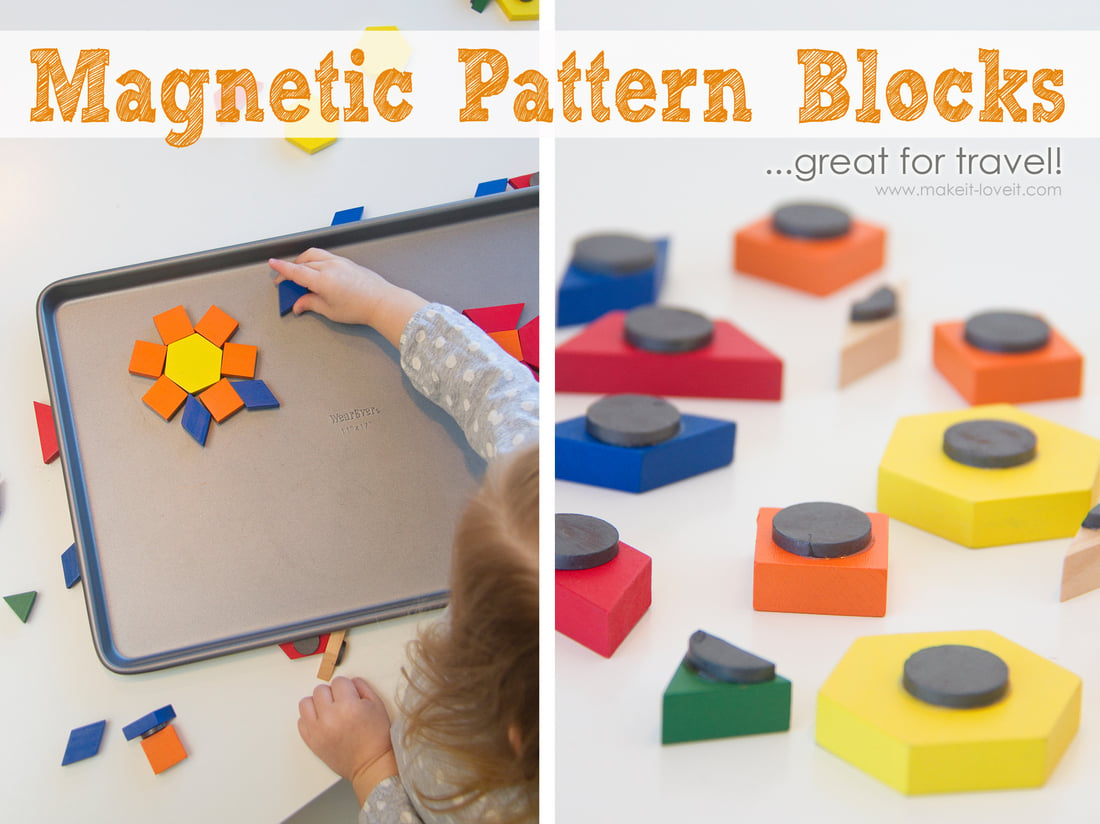 In the meantime (and while Connor was at school), I let Chloe try them out.  And you know, they were a hit for her as well….even though she’s only two.

I know there’s nothing super genius about adding a magnet to a block……but it’s actually a lot easier to create patterns and designs, without it getting messed up by slightly nudging it.  This saves a lot of little kiddo frustration! 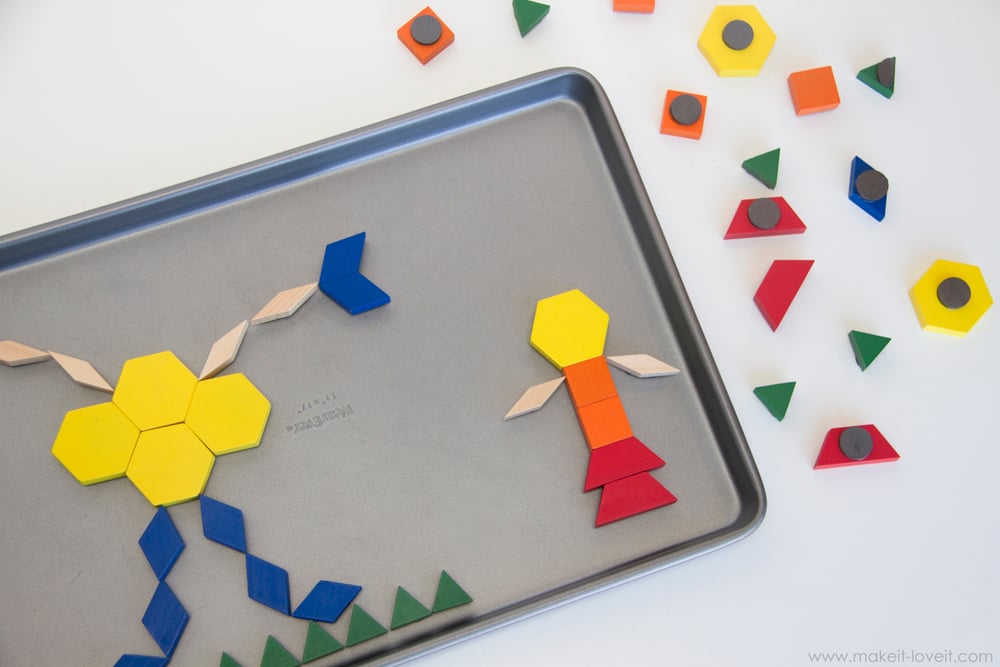 Plus, this would be a great travel toy.  Toss the wooden blocks in a bag and set the cookie sheet on their lap.  Anything to help pass the time of a long trip…….is VERY worth it! :) 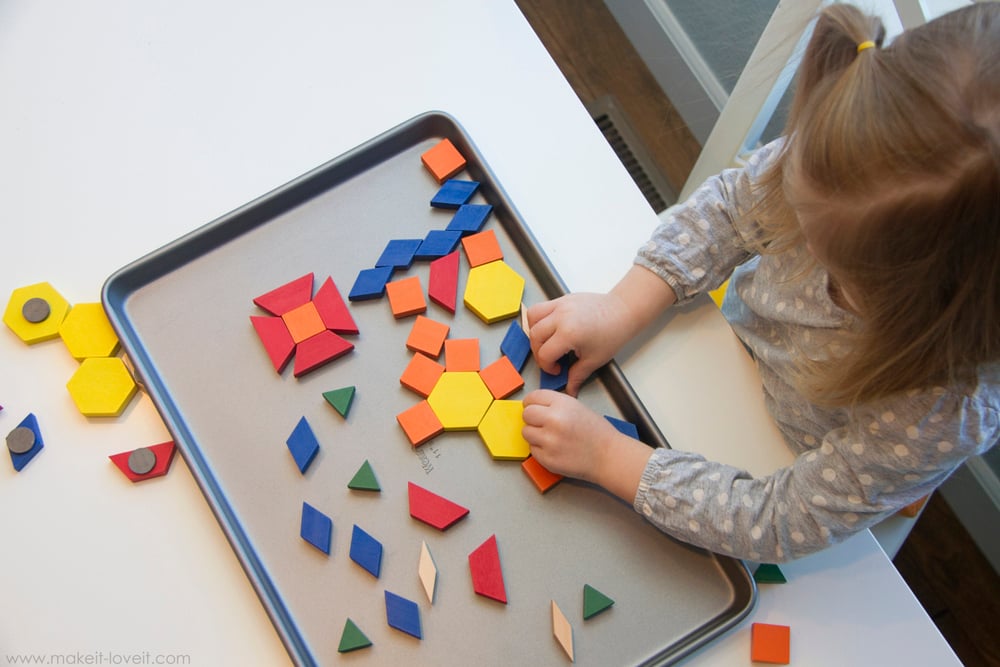 Or, add some to the fridge (ours is only magnetized on the sides)…….and let your little ones create masterpieces while you’re cooking dinner. 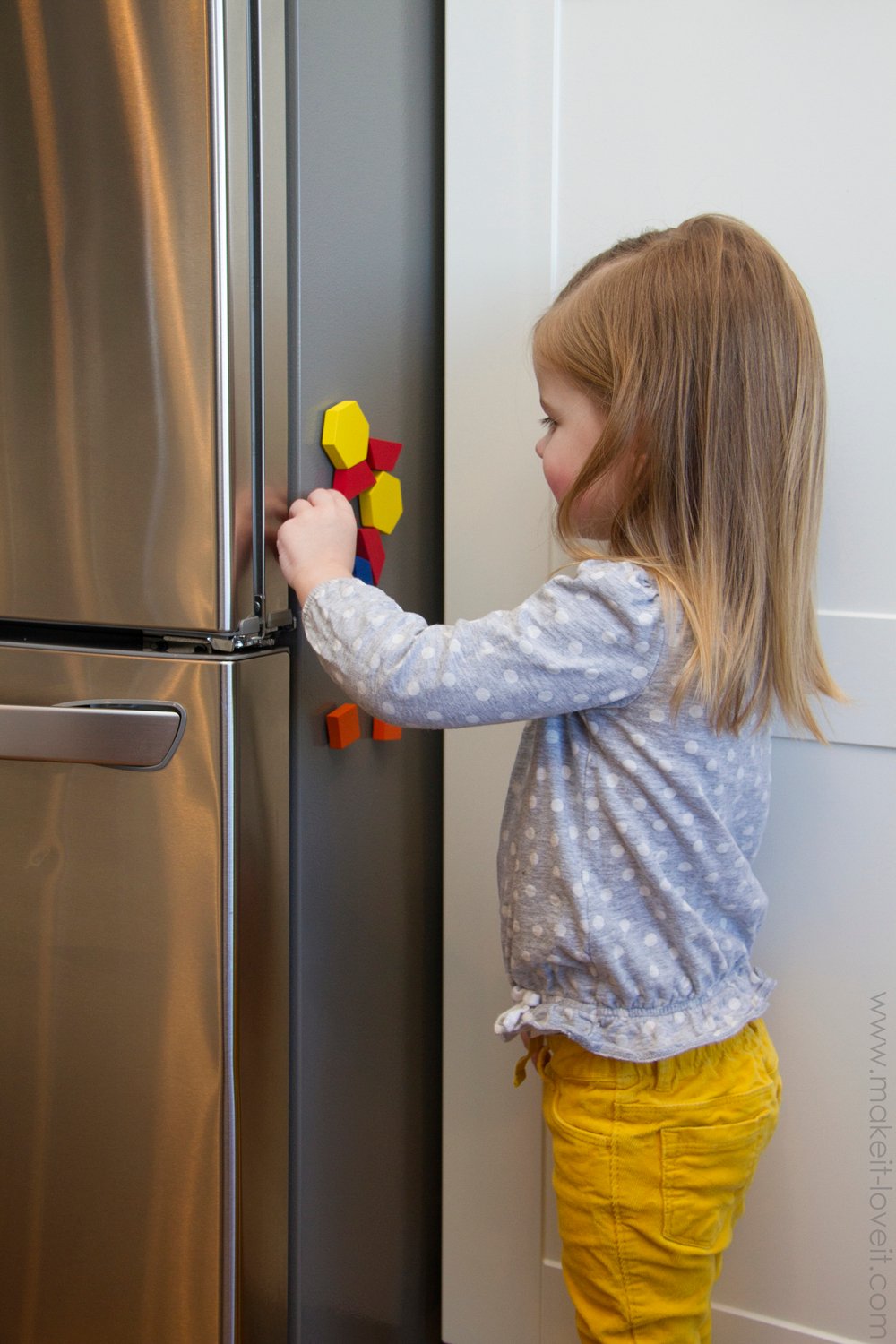 Nothing magic about this…… 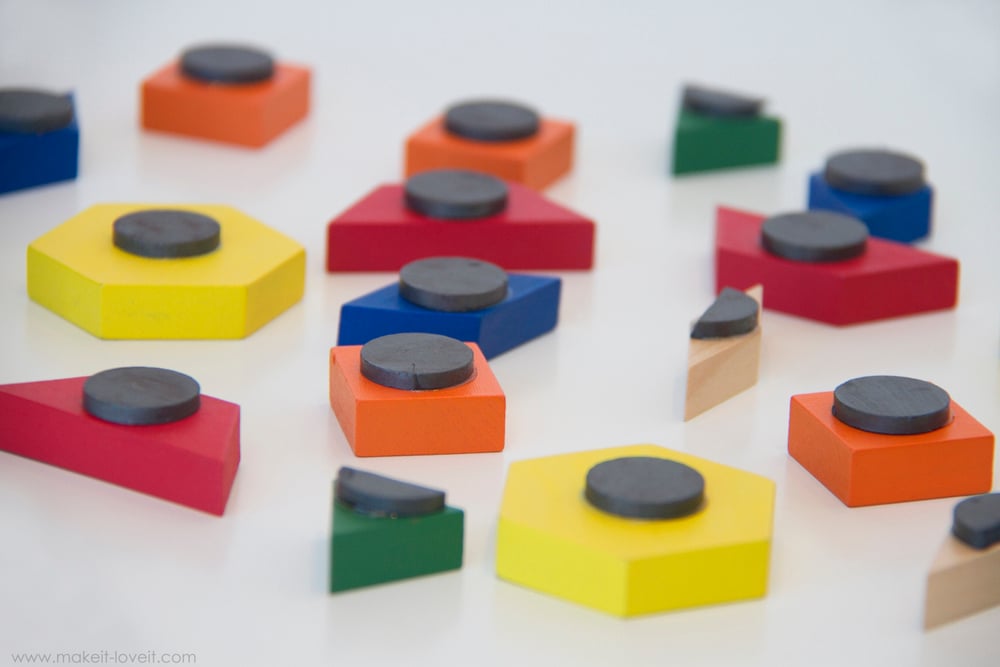 But the fun of magnets, mixed with colors and shapes………equals lots of creative designing fun! :) 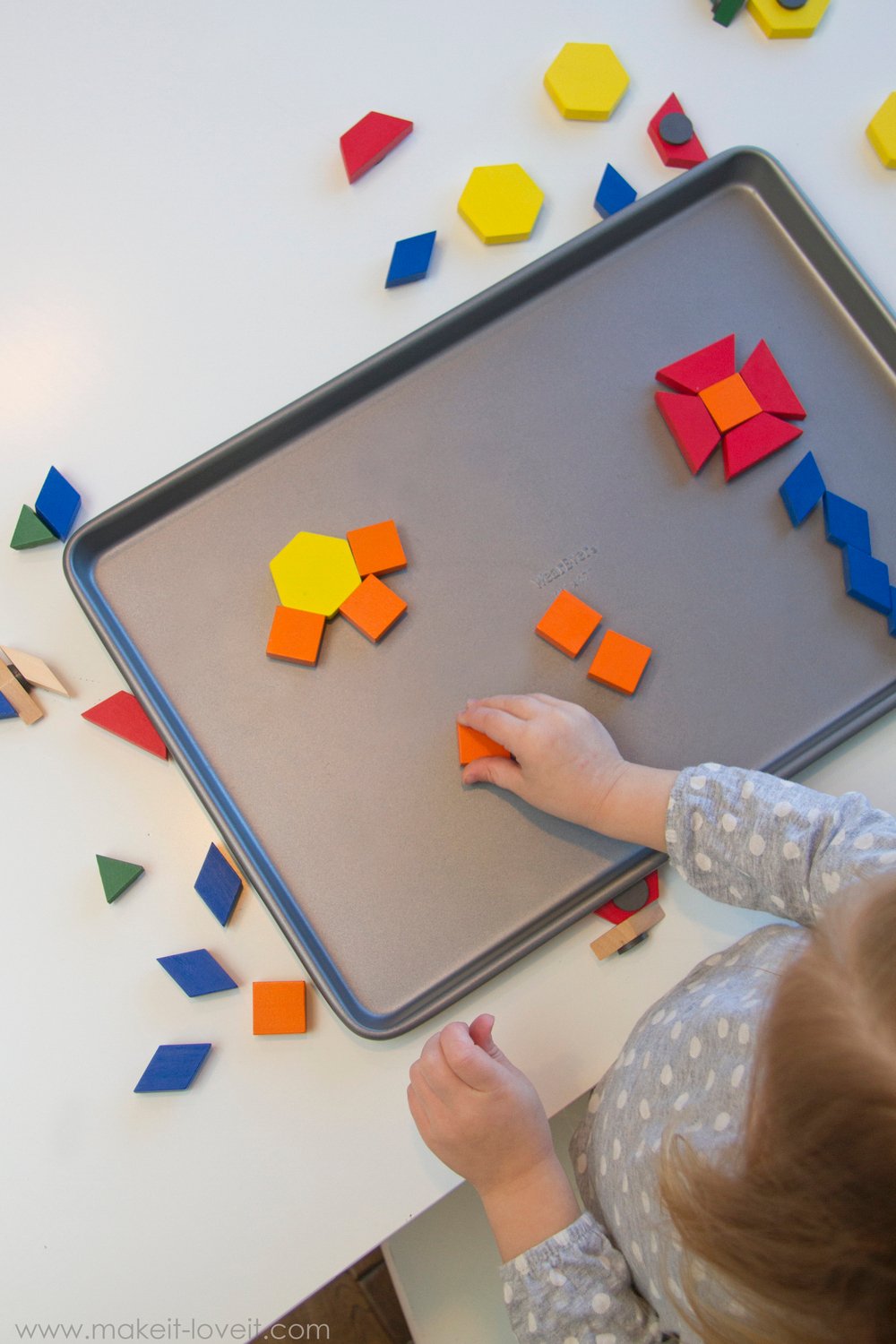 Want a few tips to make your own Magnetic Pattern Blocks?

Like I said above, there’s nothing that tricky about this project……but here’s what I used and where I purchased my supplies.

First of all, I bought a big ol’ bucket of blocks off amazon for $20.  I didn’t add magnets to all of them……so we can save the other blocks for another project.  Or a rainy day for kiddos! :)

And, I bought my magnets at Wal-Mart but found them much cheaper later on, at Amazon for about a quarter of the price!  (I didn’t even bother with the thin peel and stick magnets or the sheets of magnets…..because I figured the blocks would be too heavy for that type.  So I skipped the headache.)

Also, I didn’t use hot glue because I didn’t want to chance it peeling off and then having random magnets around the house.  So, I went with epoxy glue.  My favorite kind is Amazing Goop, the craft variety.  It’s crazy strong stuff! :)

I just added blobs of glue onto the magnets and then stuck them right onto one side of the blocks. 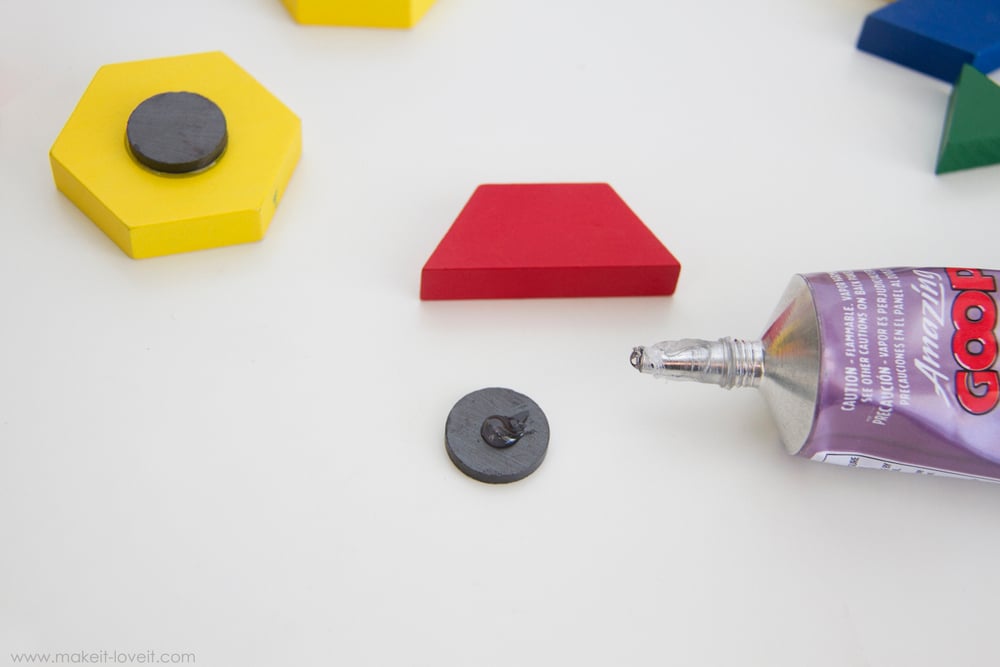 While drying, be sure to keep them all separate so that the magnets don’t pull on each other and mess up your magnet placement. 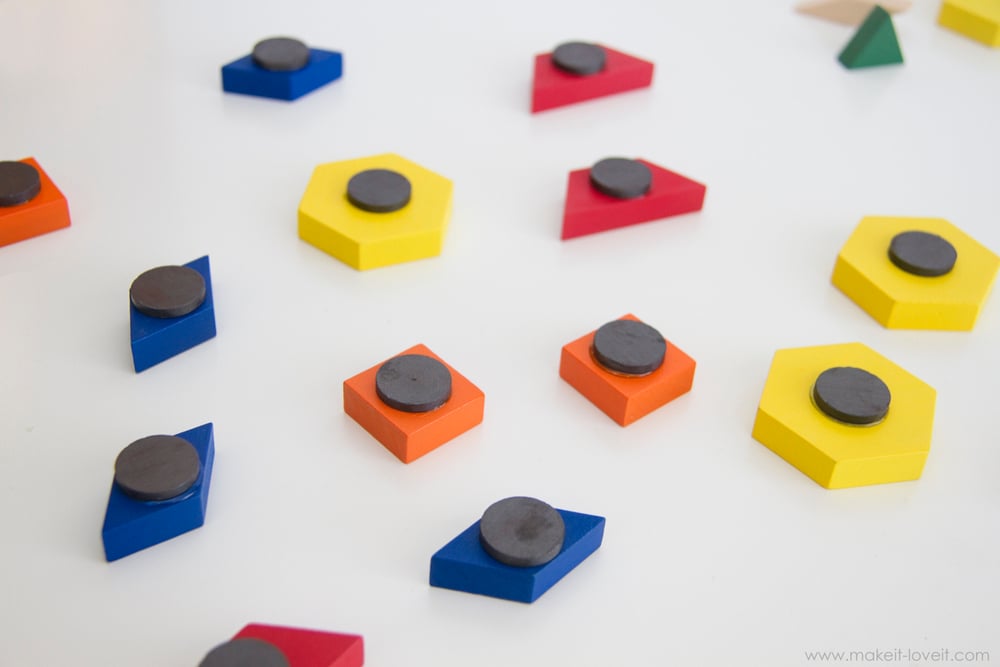 And if the glue oozes out a little, no worries.  This will just anchor the magnet down a little more. 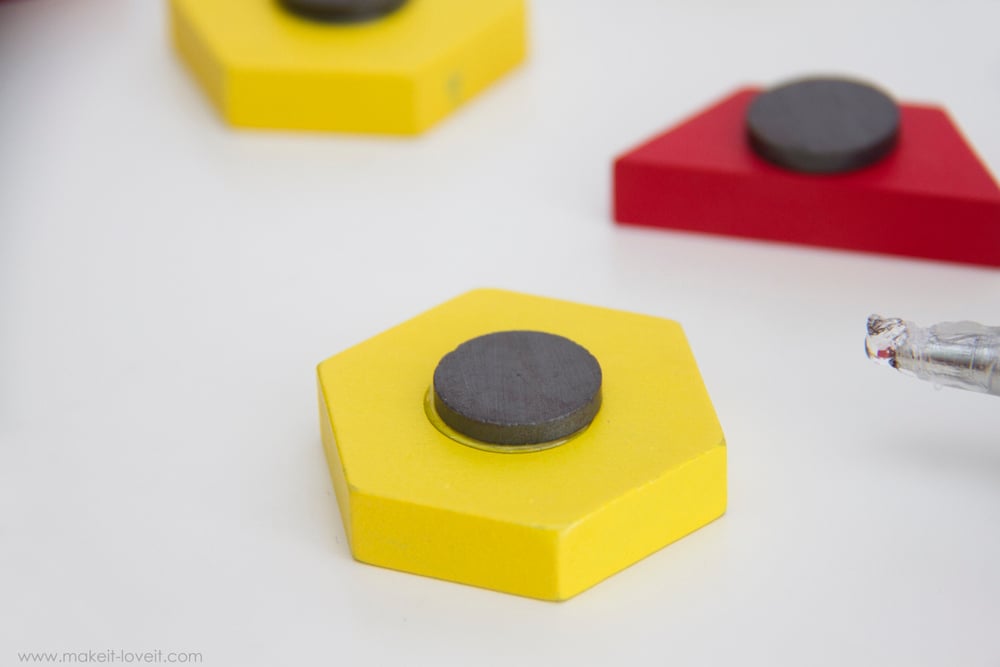 Also, you don’t want the magnet to hang over any of the edges of your blocks (or else the blocks won’t fit tightly together when you’re making designs).  To remedy this, I used 2 pairs of vice grips and pinched two opposite edges of a magnet and snapped it in half.  To fit the smaller blocks, I had to chip off a little extra of some of the corners of the magnets. 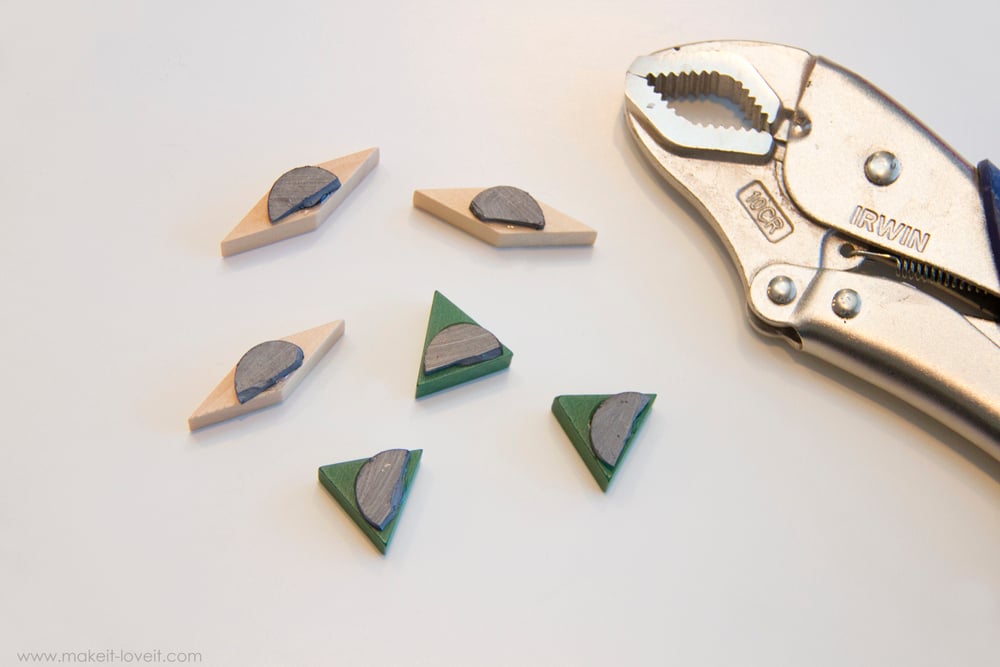 And that was it.

Now, time for some fun!