Elmo Cupcakes……you know you want one! :)

Each of my children have loved Elmo around the ages of 1 and 2.  Well, and ages 3, 4, 5, and 6 as well.  But not as much as ages 1 and 2.  He’s furry and friendly and that high pitched voice somehow entrances the littlest of ears.  And haha, you gotta admit, he even makes adults smile at times.  Oh, the things he says…

It IS kinda funny.  (Or maybe I’m somehow turning into a really wacko mom who begins enjoying baby shows. Help!)

Anyway, I wanted to make some birthday cupcakes (yes, for Chloe, my now 2-year-old!) over the weekend and while at the store, I hurried and googled Elmo Cupcakes on my phone.  This same type of Elmo cupcake that I’m sharing today, popped up all over the internet.  So maybe you’ve seen/made them…….17 times already.  I know, totally not rocket science but I have yet to find an actual tutorial for them, so I thought I’d show how simple they really are.  And how I spent my Saturday morning.  :) 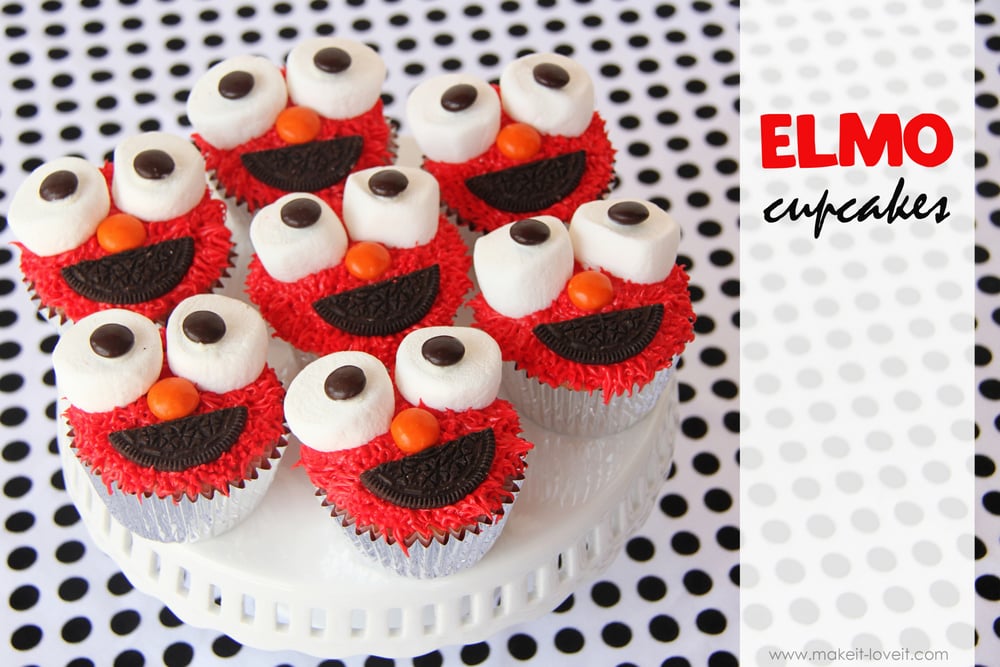 These little guys came together really quickly……and as I placed each puffy white eyeball and round orange nose on his face, I smiled.  How could I not?!! 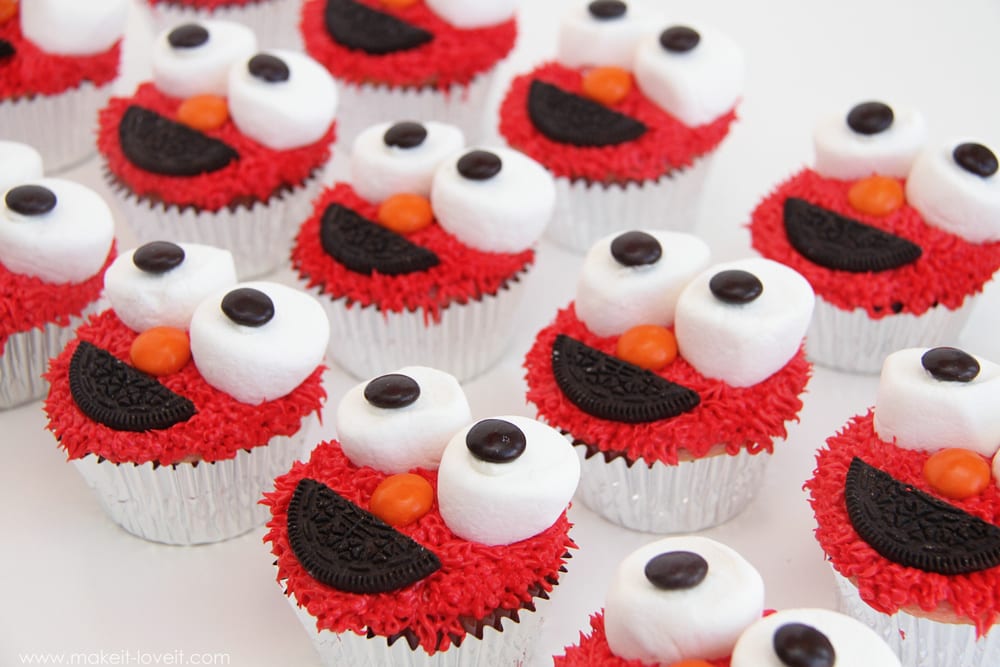 What IS IT about this furry red guy?!?! 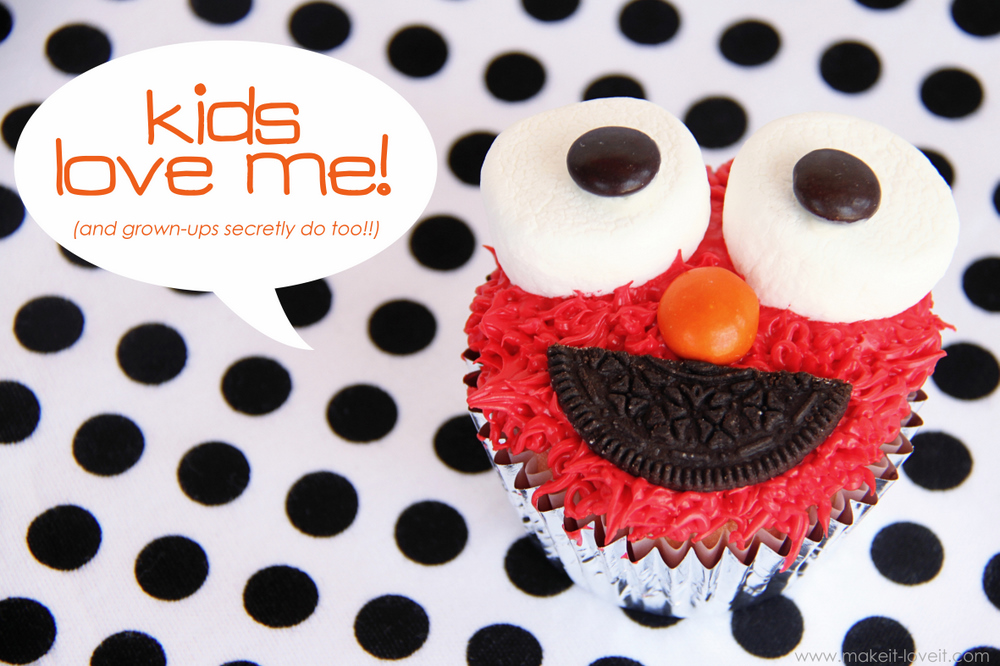 Chloe was sweetly surprised with her favorite little monster atop her b-day cupcakes…..and she wanted them ALL! 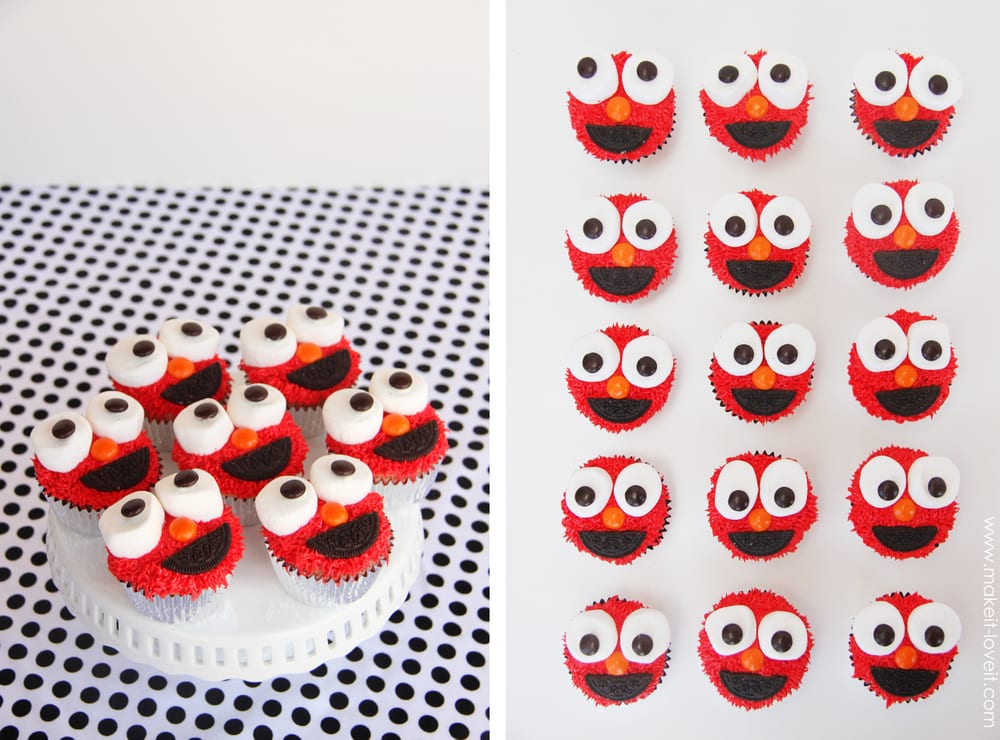 I’m just glad that a 2 year old is easily pleased with an amateur cupcake design. 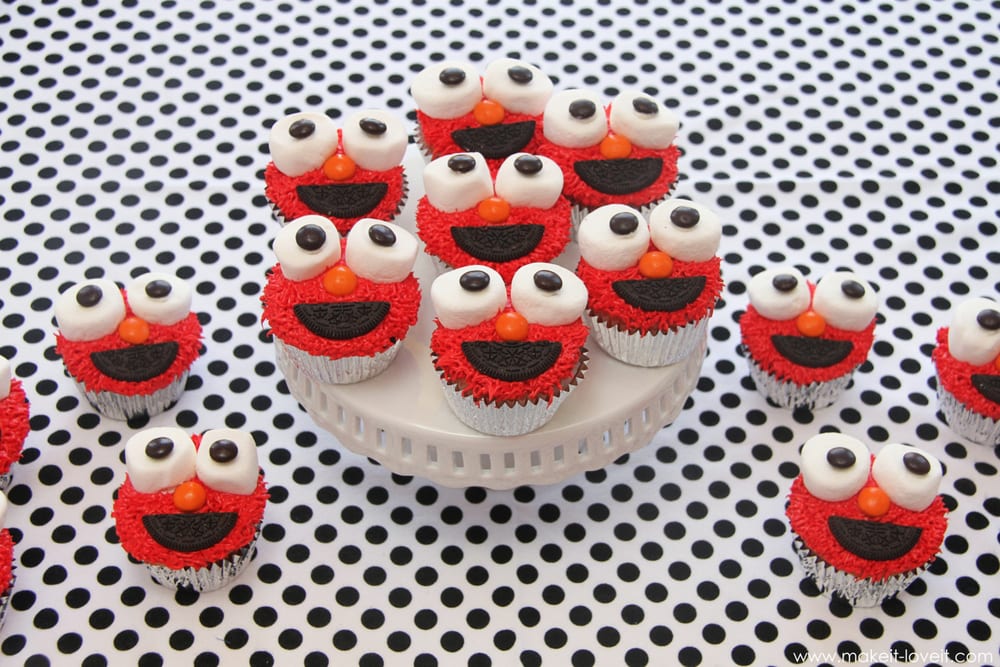 And even more happy that Elmo’s quirky smile put a memorable grin on my now two-year-old’s face! 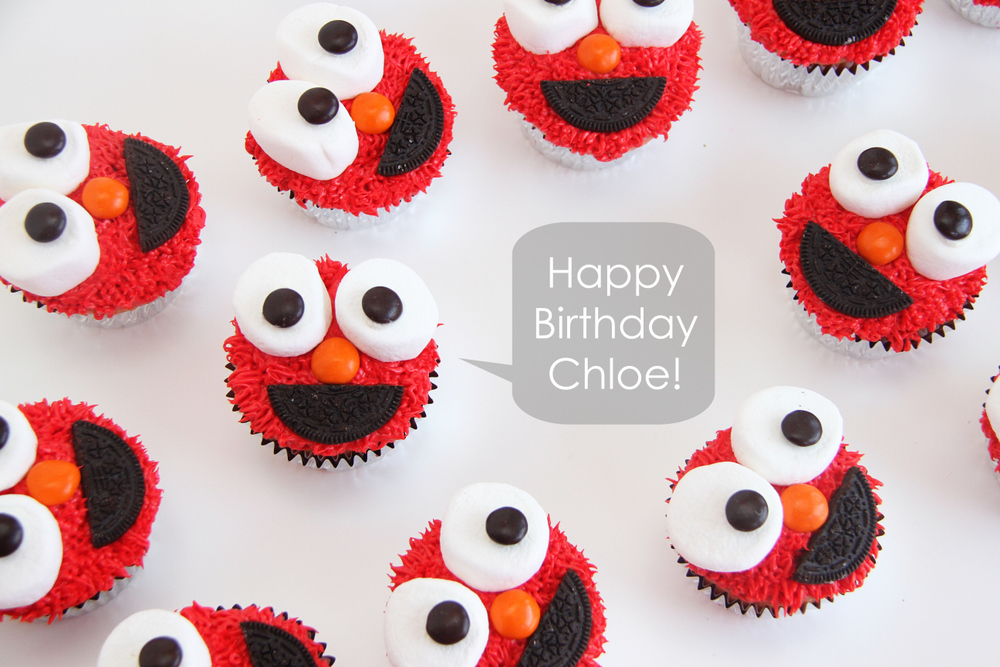 First of all, you need bright red frosting.  You can buy pre-mixed red frosting at the store but have you ever tried that stuff?  It’s gross.  So, I bought some cherry flavored Duncan Hines frosting (which my mom says tastes terrible…..ha!) and added red food coloring gel to it.  And I picked cherry flavored frosting because it was already pink…..and knew that I’d have to use less food coloring to get the bright red that I wanted.

Then, I grabbed my frosting tip that had all the little holes in it.  Yeah, I’m no baker, so I have no clue what that little tip is called but it looks like a mini pasta extractor. :)  Whatever it’s called, it makes really great Elmo fur.  So start squeezing little bits of “hairy” frosting all over the cupcake. 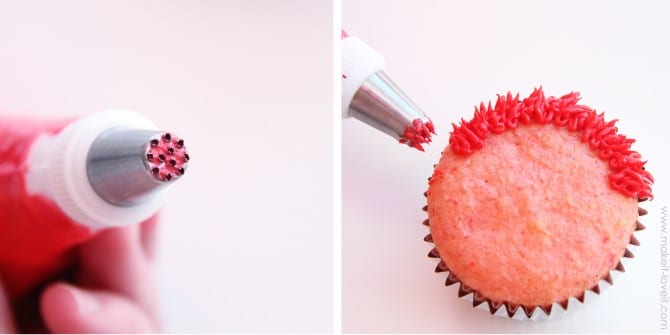 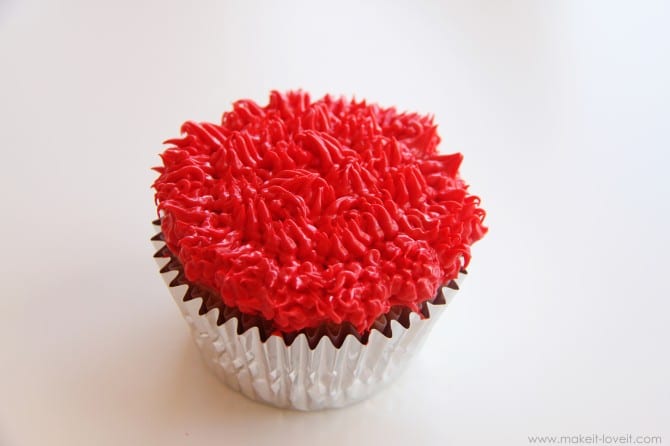 Then, cut a large marshmallow in half with kitchen scissors and then reshape it with your fingers. 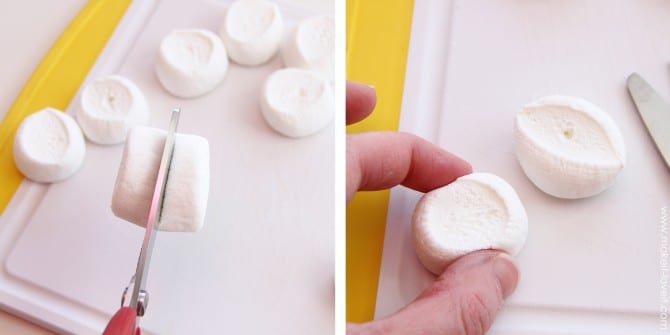 For the mouth, I used one side of an Oreo.  I have seen people use black frosting too……but the Oreo gives the mouth a nice crisp shape.  Now, I found that cutting the Oreo half directly in half was too large.  So cut off less than half for each mouth, using a serrated knife and sawing it slowly back and forth.  (You should be able to get 2 mouths from each Oreo half.) 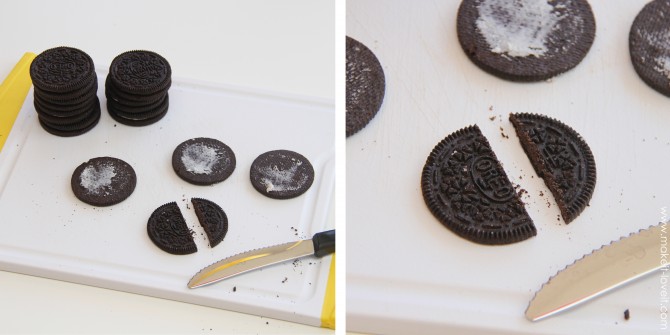 Then, assemble each Elmo face.  Place the marshmallows sticky side down and for the nose, I used a Peanut Butter M&Ms.  Orange gumballs would be fun too.  For the eyes, I placed a bit of white frosting on the back of brown regular M&M’s and placed them onto each marshmallow. 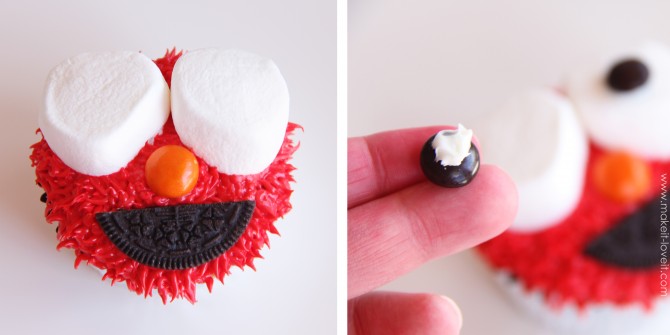 And there you have it.  Sweet little Elmo faces, ready to be enjoyed by young and old! :) 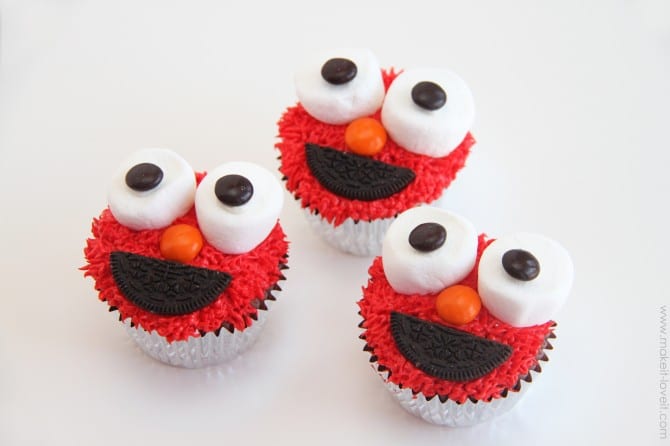 ****TIPS: Cut all the marshmallows and Oreos first, before frosting the cupcakes with the elmo fur.  You don’t want the red fur to melt or get droopy while you’re doing the cutting.  ALSO, after assembling each Elmo, I placed it in the fridge, just to help set up the frosting so it would stay furry looking and not melt together.  HOWEVER, if you’re using better frosting than the store bought (from a tub) you may not have any issues if you adjust your frosting consistency. 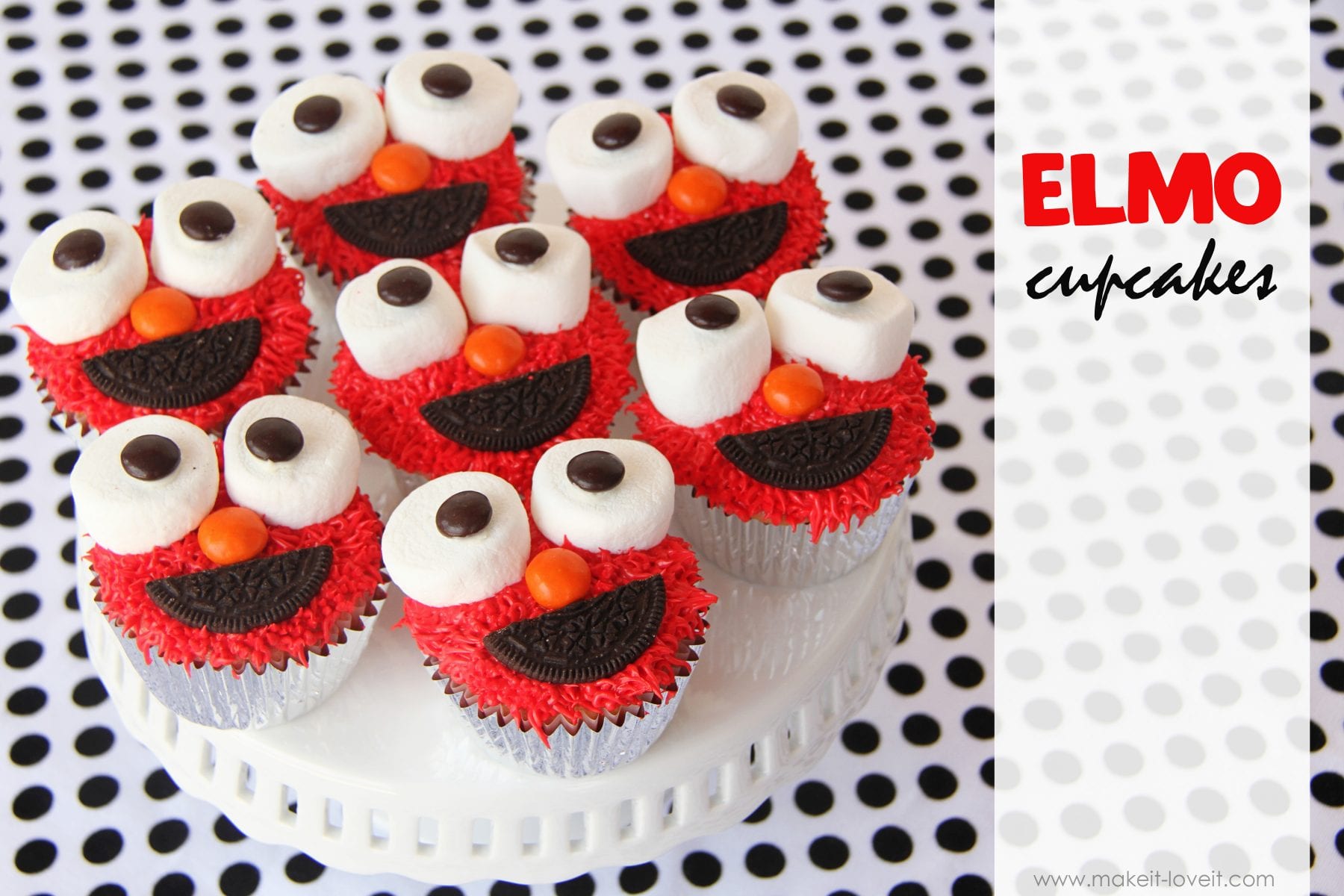 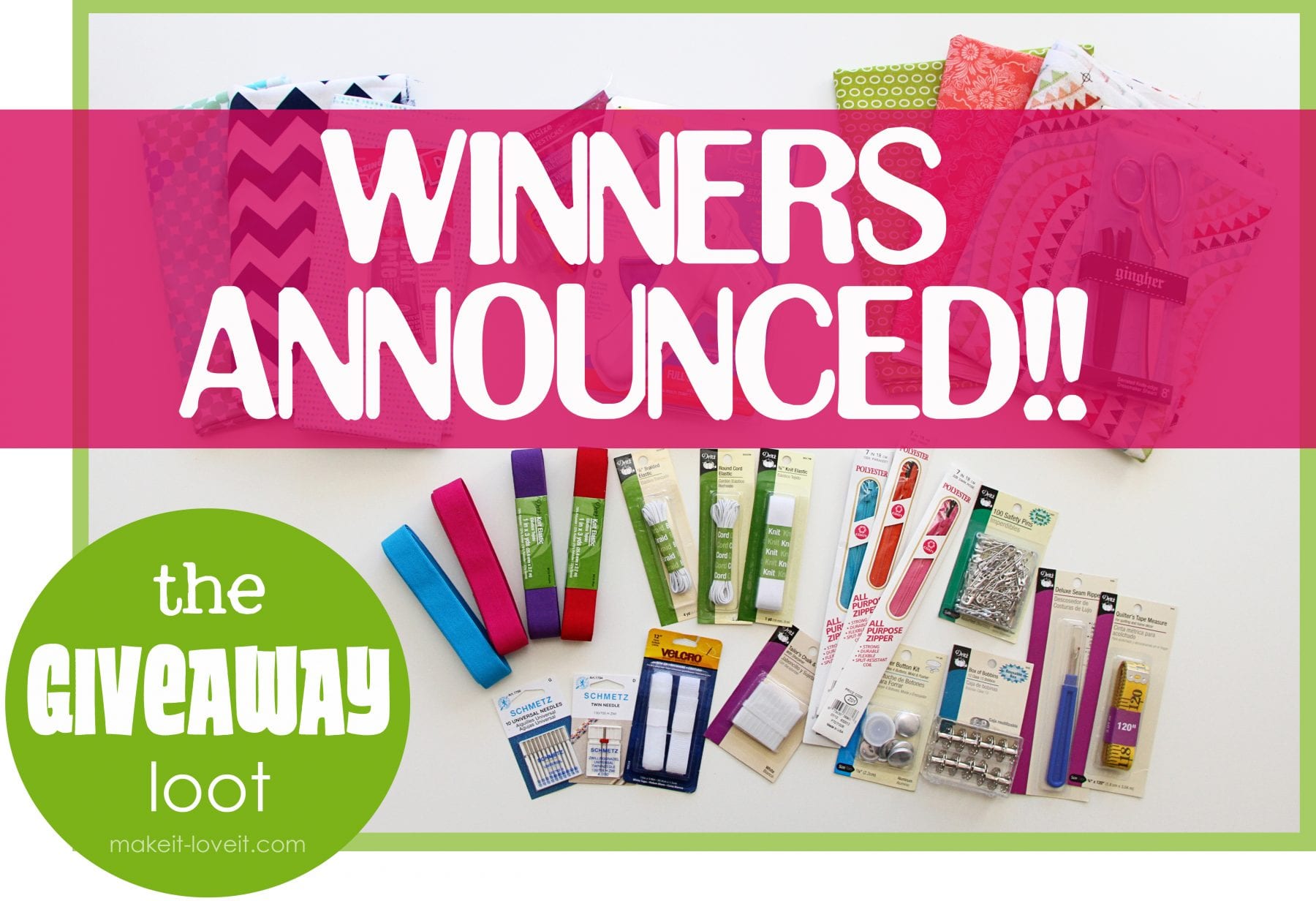 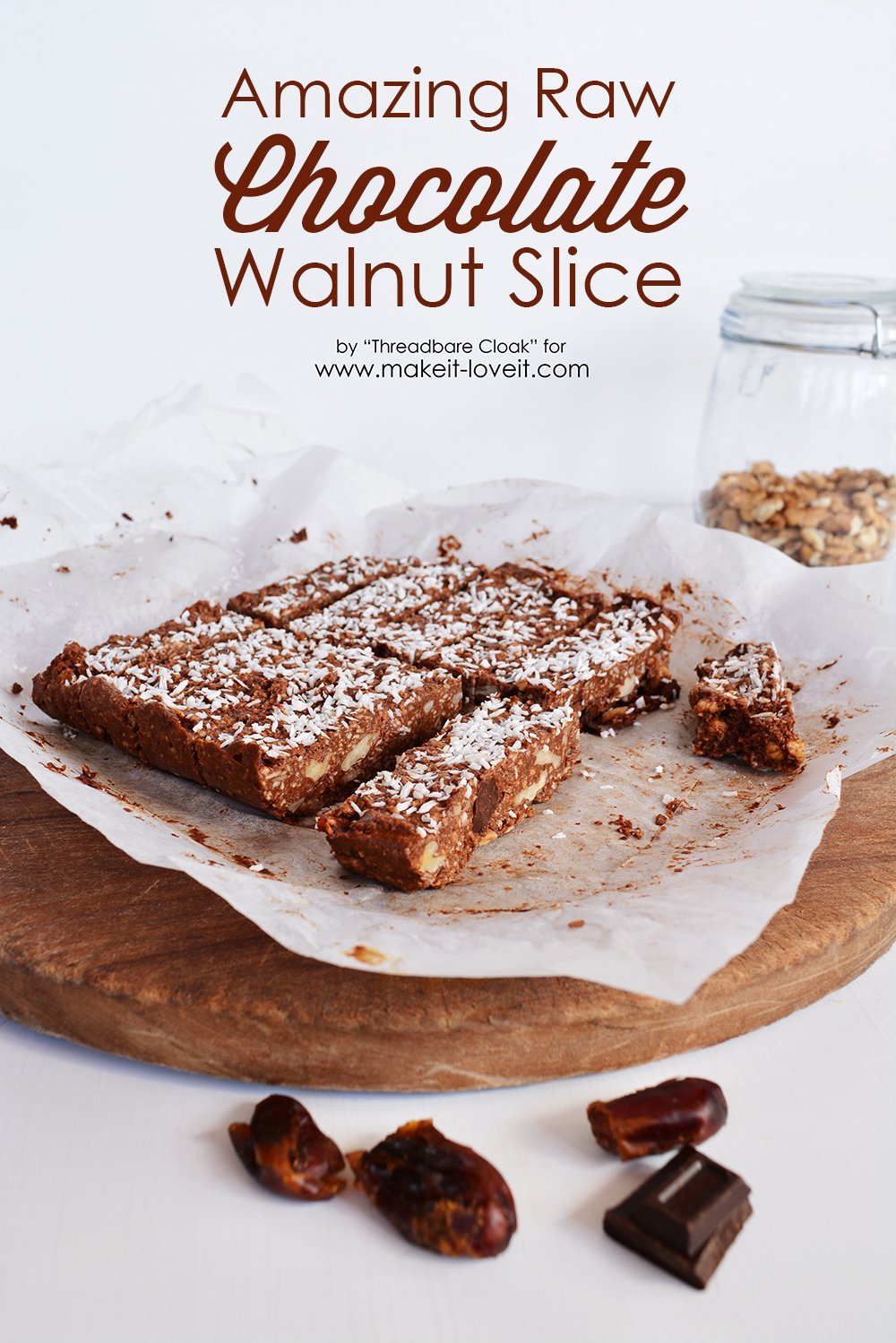 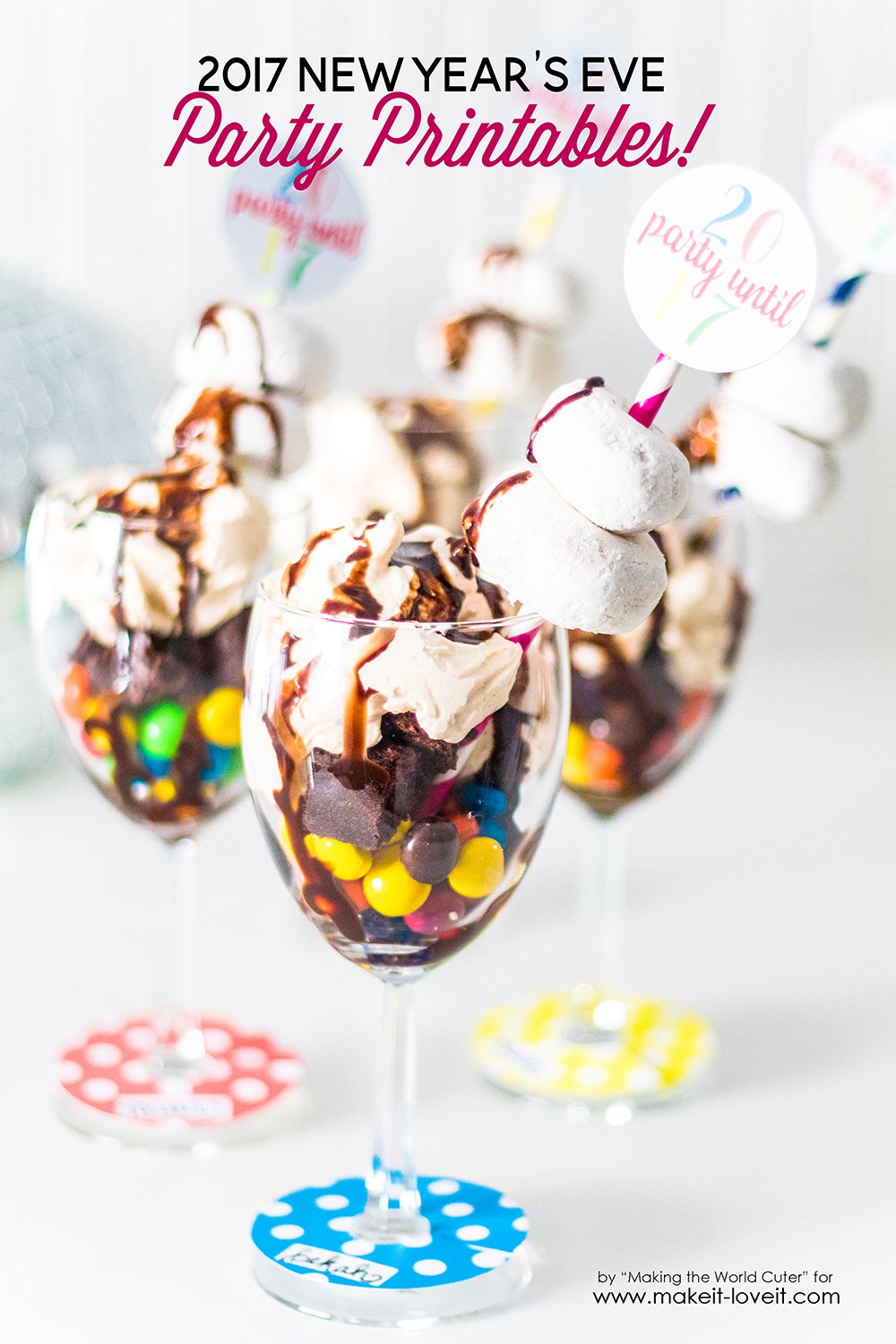 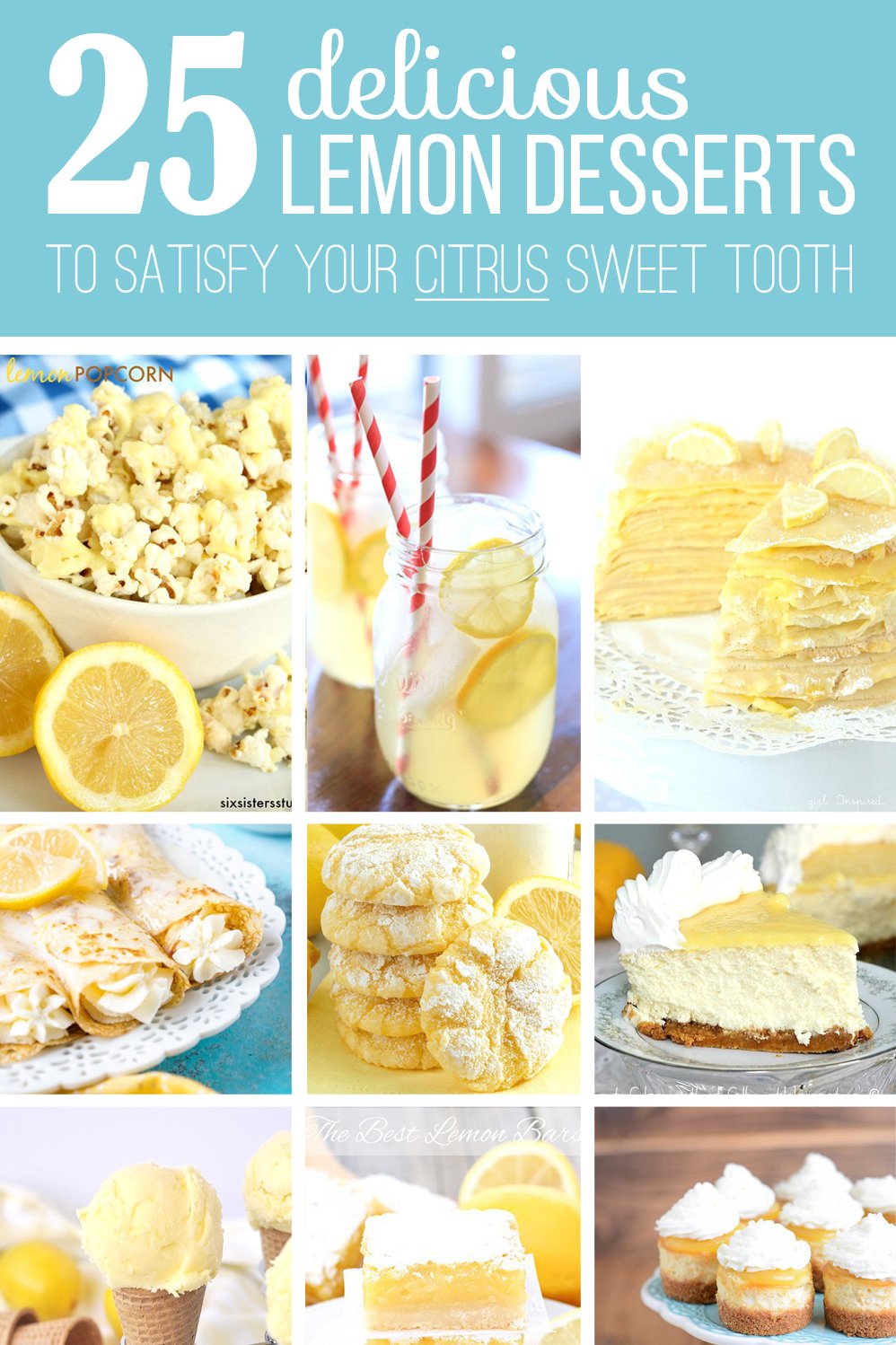 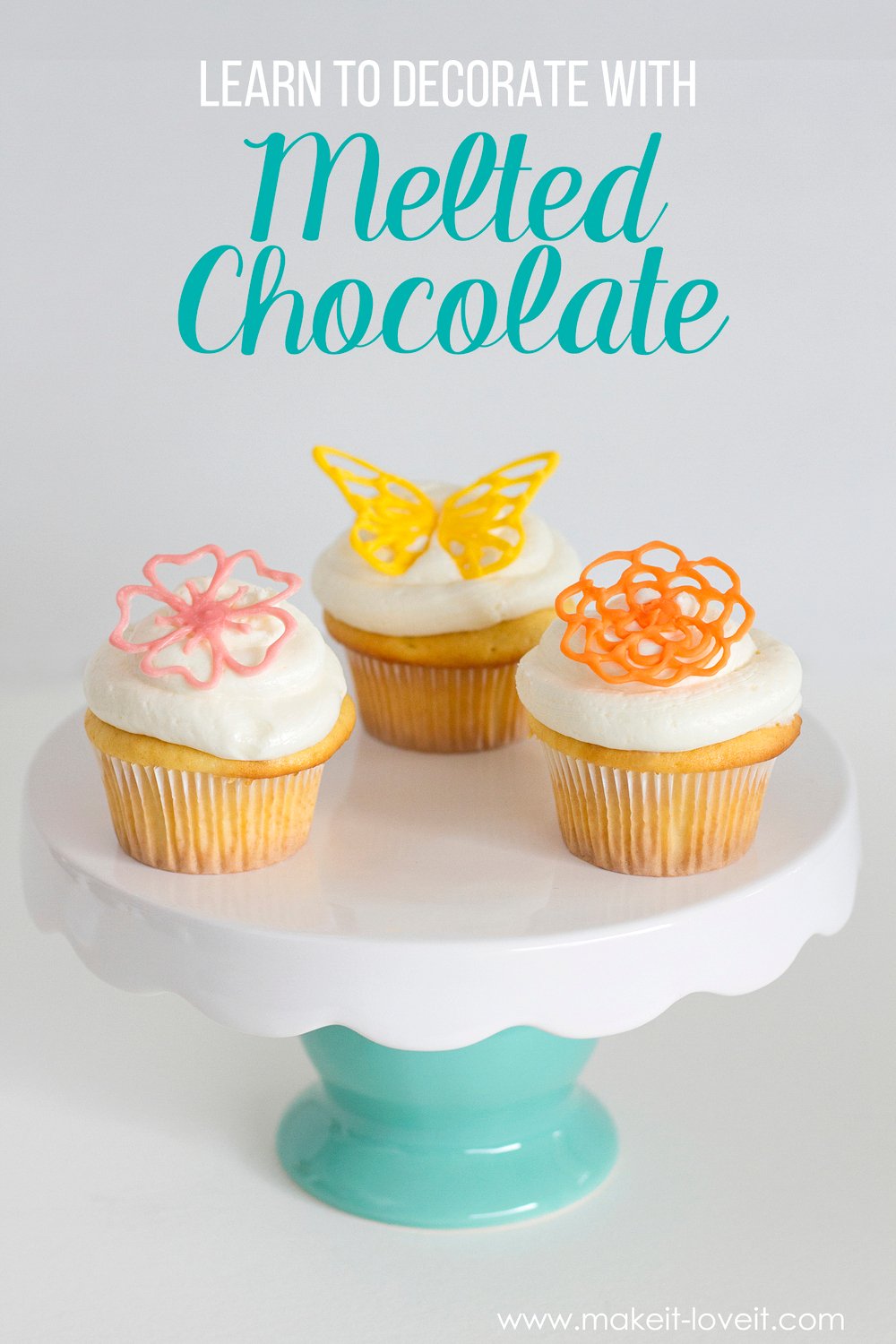 Learning to Decorate with Melted Chocolate