Okay, I know, it’s November and I actually considered not sharing the rest of these dang costumes and just saving them for next year…..because, let’s move onto Thanksgiving already, right?!?  Aggggh!  To help me decide, I took a poll over on Instagram to see what interested you readers.  And according to my “super scientific method” of questioning a really diverse population over on Instagram (haha, not really), 86% still wanted to see them.  Awww, guys, bless your sweet little hearts for humoring me…..and for being so patient with me this year!  To you 14%…..I get it. Hang in there, I’m almost done…..haha!  So for today, I’m going to show you Connor’s No-Sew Tornado Costume….that fit right in with the weather theme we put together this year!  (Ellie’s Rain & Storm Cloud Costume is HERE, Chloe’s Rainbow & Sunshine Costume is HERE, and Oliver’s Lightning & Storm Cloud Costume is HERE.)

Living here in Oklahoma for the past 4 years, we’ve seen a lot of extreme weather.  And even though we have super intense thunder/lightening/hail storms, that cause insane amounts of damage, the most frightening weather of all…..would be the darn tornadoes.  However, as horrifying as it is to see the damage these monsters can cause, they’re equally fascinating.  And because of that, Connor jumped all over the Tornado Costume suggestion! :) 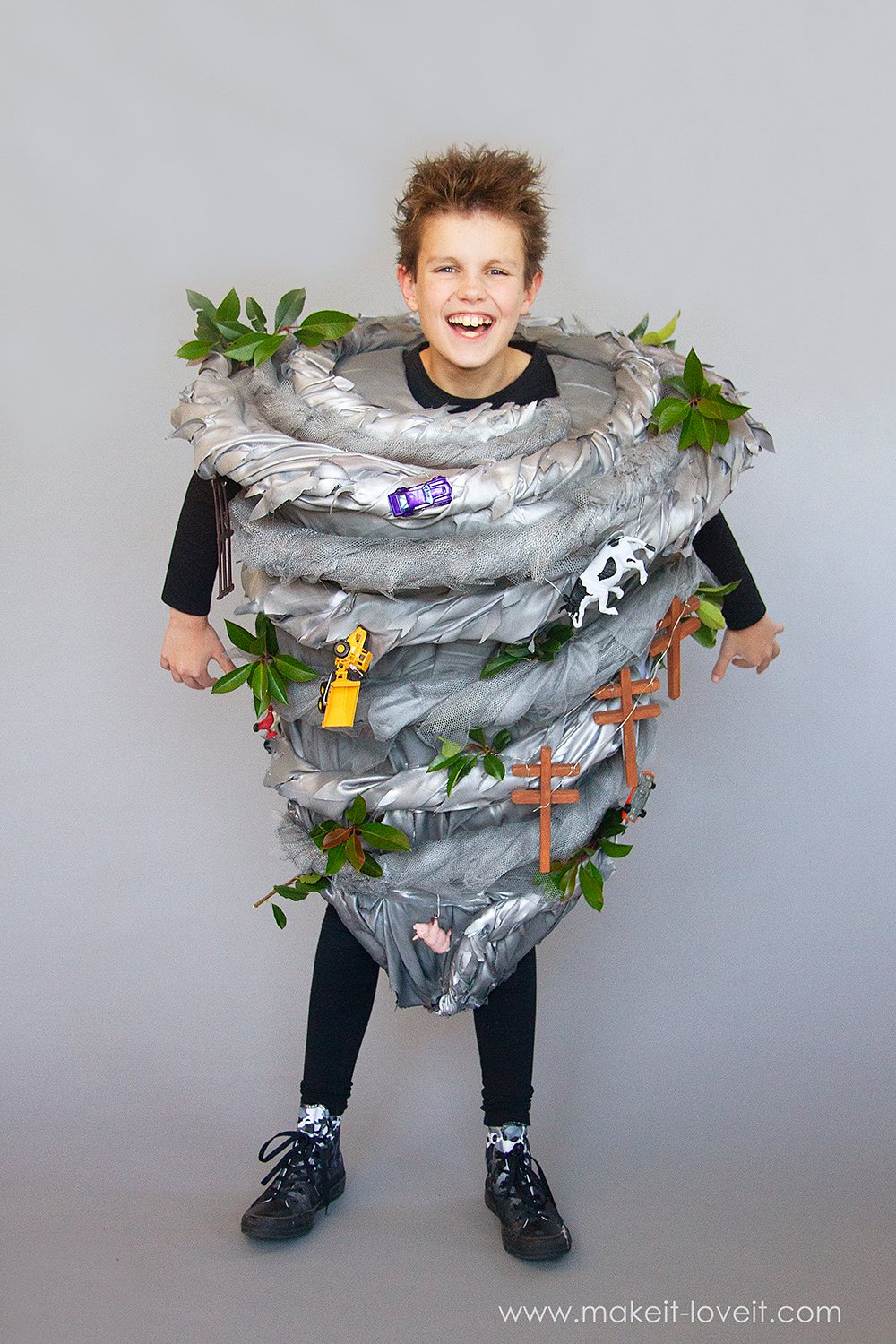 And a perk for you non-sewists out there—this is a N0-SEW Tornado Costume.  Only safety pins, some wire, and plenty of hot glue. 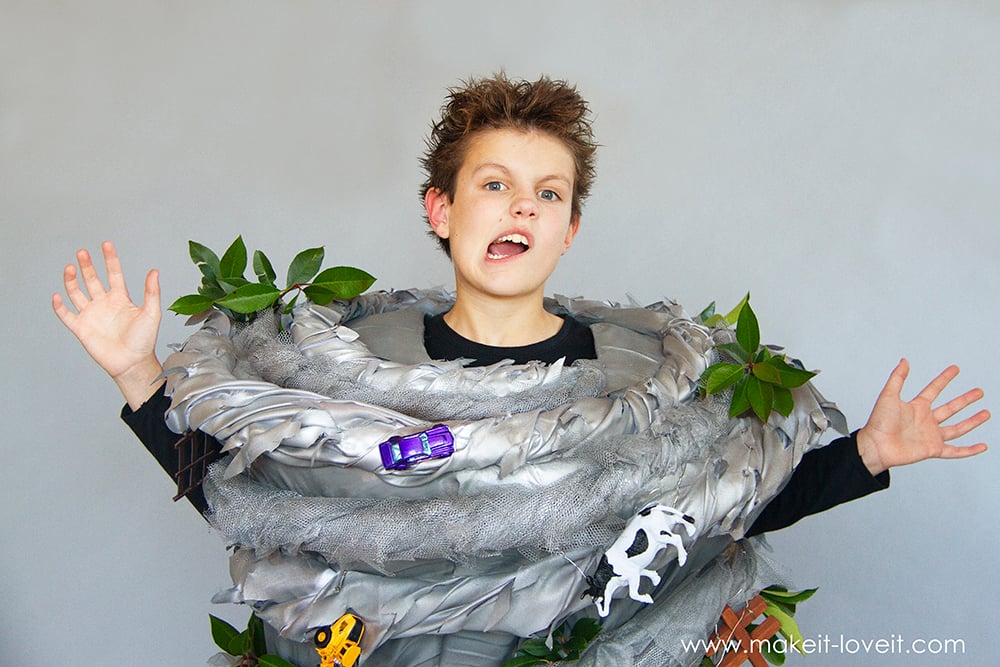 What’s underneath all those tornado spirals, helping to keep the shape??  Well, it’s a round trash can with a lid……with lots of holes cut out of it, to lighten it up.  But I recommend some other options down below, so be sure to read through that first. 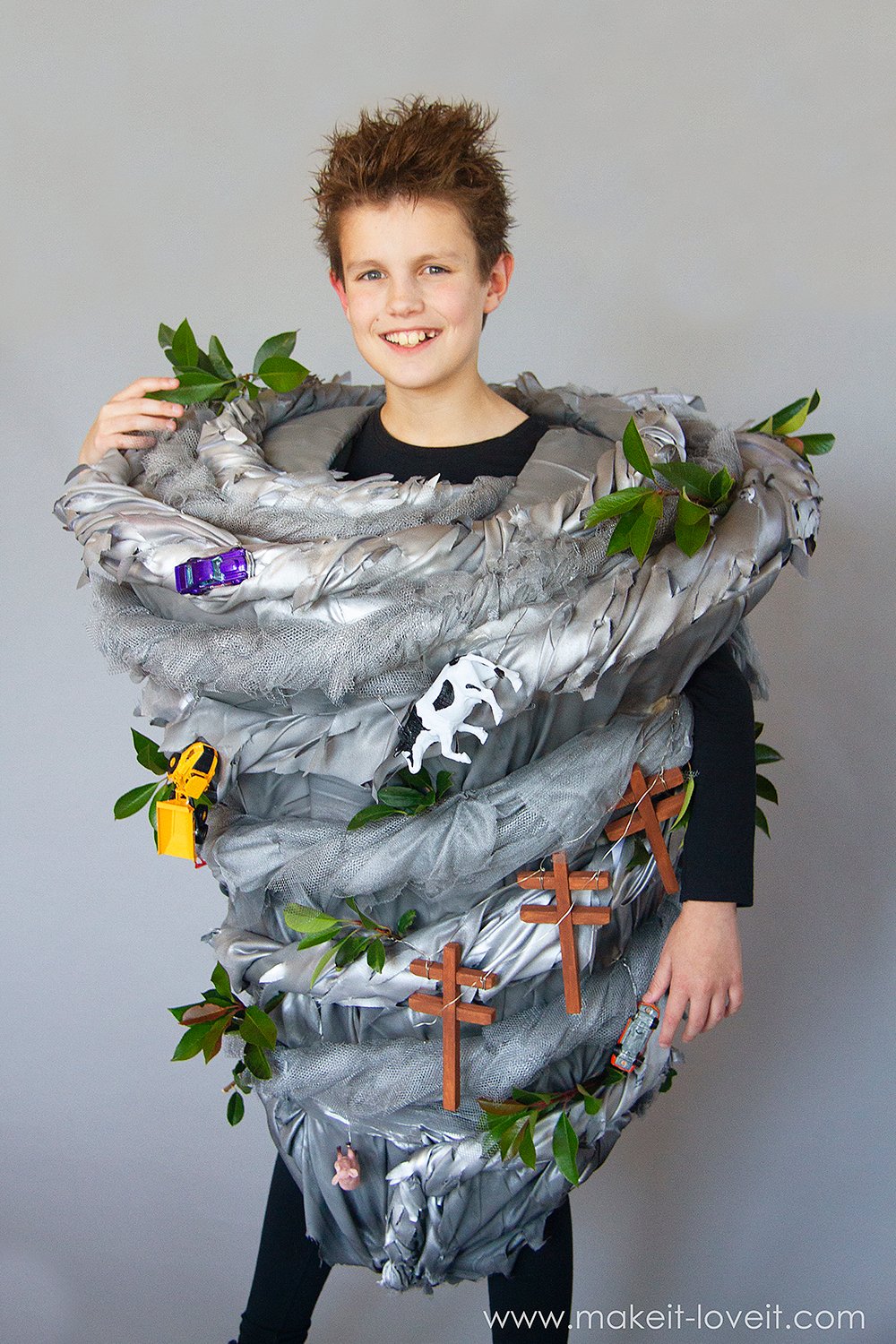 And if you know tornadoes, you know they sometimes carry with them the things in their path.  So we added some farm animals, fencing, and tree branches to this spiraling cyclone.  But don’t worry, no animals were harmed in the production of this photo shoot, and all were lowered safely to the ground at the end. 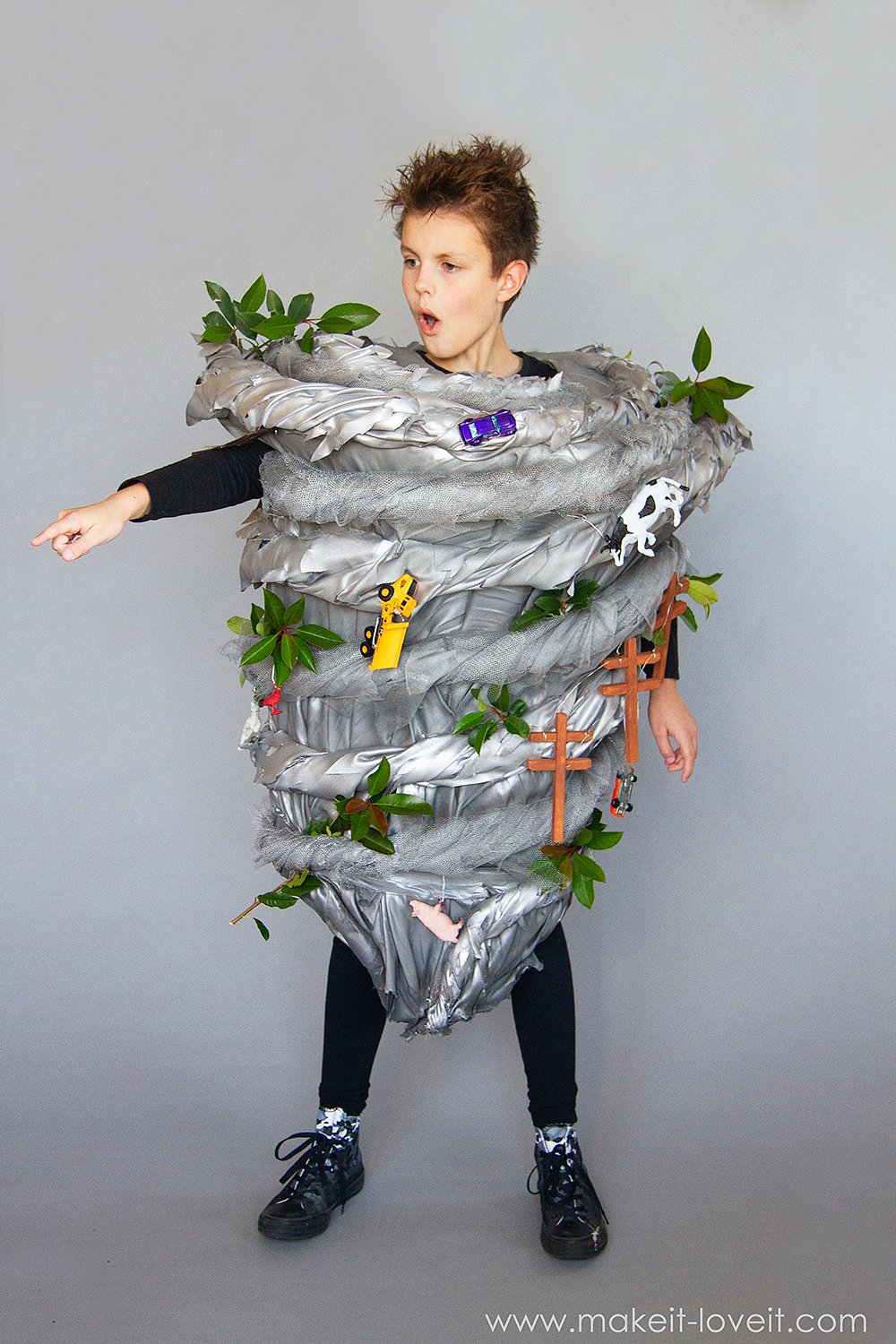 My favorite piece of swirling debris, might have to be those power poles that got sucked right up into the storm.  (Steve whipped those up out in the garage from wood scraps, while I was putting this tornado together.)  In case you didn’t you didn’t know, it’s super common to see power flashes in a tornado, which are caused when a tornado hits a power pole. This is actually helpful at nighttime, when you’re unsure if there’s an actual tornado touching the ground, since it’s too dark to get a visual.  Once you start seeing those power surges though, which create big bursts of light, you know the tornado is on the ground causing damage.  Helpful, right??  (I’d like to thank my local weatherman for all this info, which he so freely gives me during tornado season……haha!  I only laugh because tornado season is a crazy time of year and the meteorologists get super amped up, which makes me appreciate their passion.  I kinda bet Oklahoma is every meteorologist’s dream location though, because you can pretty much guarantee having tornadoes (yep, plural), every single year.  When there’s an active storm, the LIVE coverage coverage takes over all the local channels, and can last several hours.  But no joke, the enthusiasm of the meteorologists who’s reporting the tornado activity, equals that of one of those crazy football game commentators.  We call it the Oklahoma Super Bowl. Ha!) 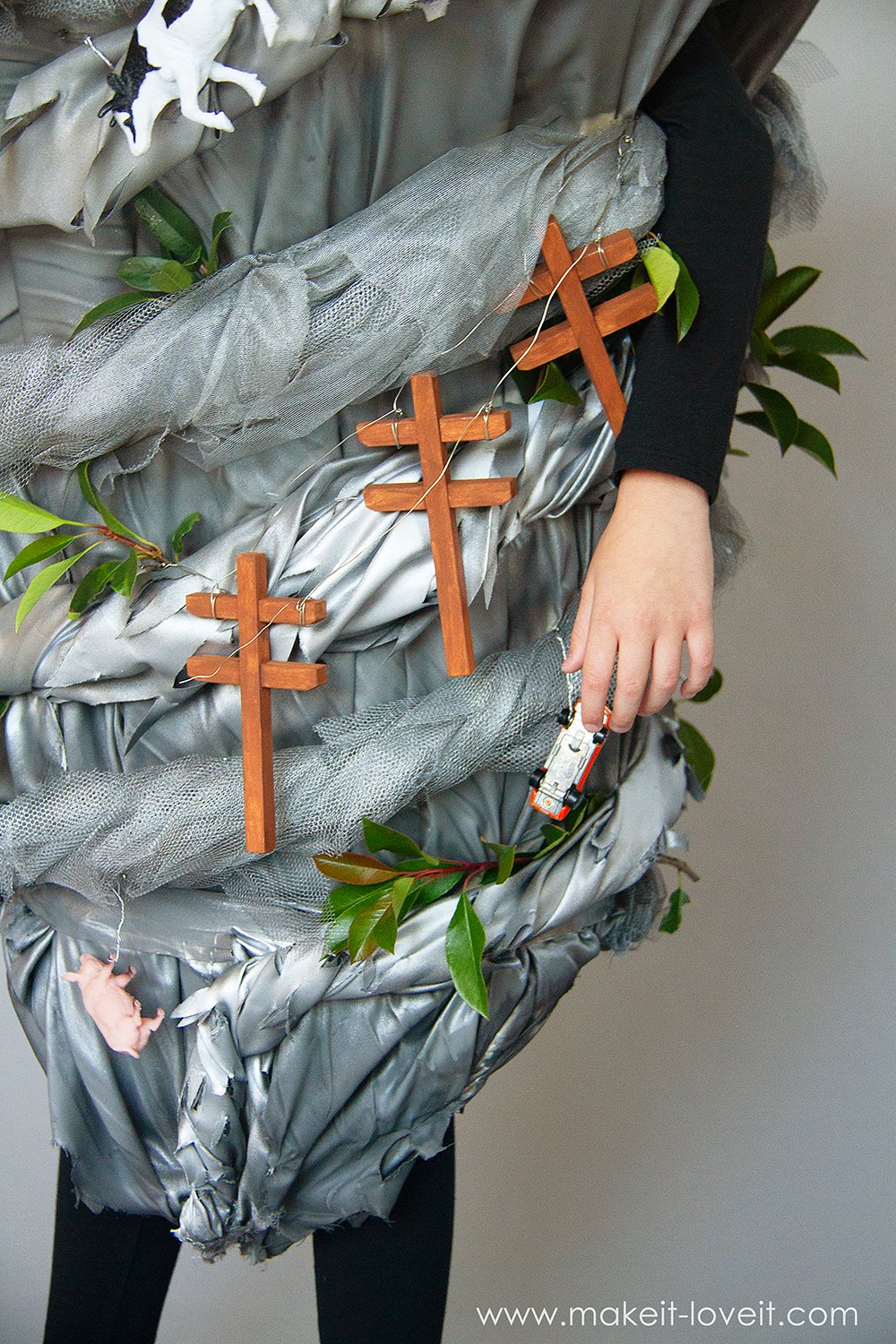 During the 4 years we’ve lived here, we’ve heard the distinct wails of the tornado siren being tested, every Saturday at noon.  It’s kind of an eery sound but also comforting, knowing we have those in place.  However, we’ve only heard the sirens go off during a true tornado threat near us, maybe 3 or 4 times. And we’ve only had to go down into our STORM SHELTER one time….but thankfully were unharmed.  (Are you curious what that is?  Or where you’d put one?  I was too.  So here’s a post about our Tornado Storm Shelter ….which is something all of our out-of-town guests want a tour of first. Haha!) 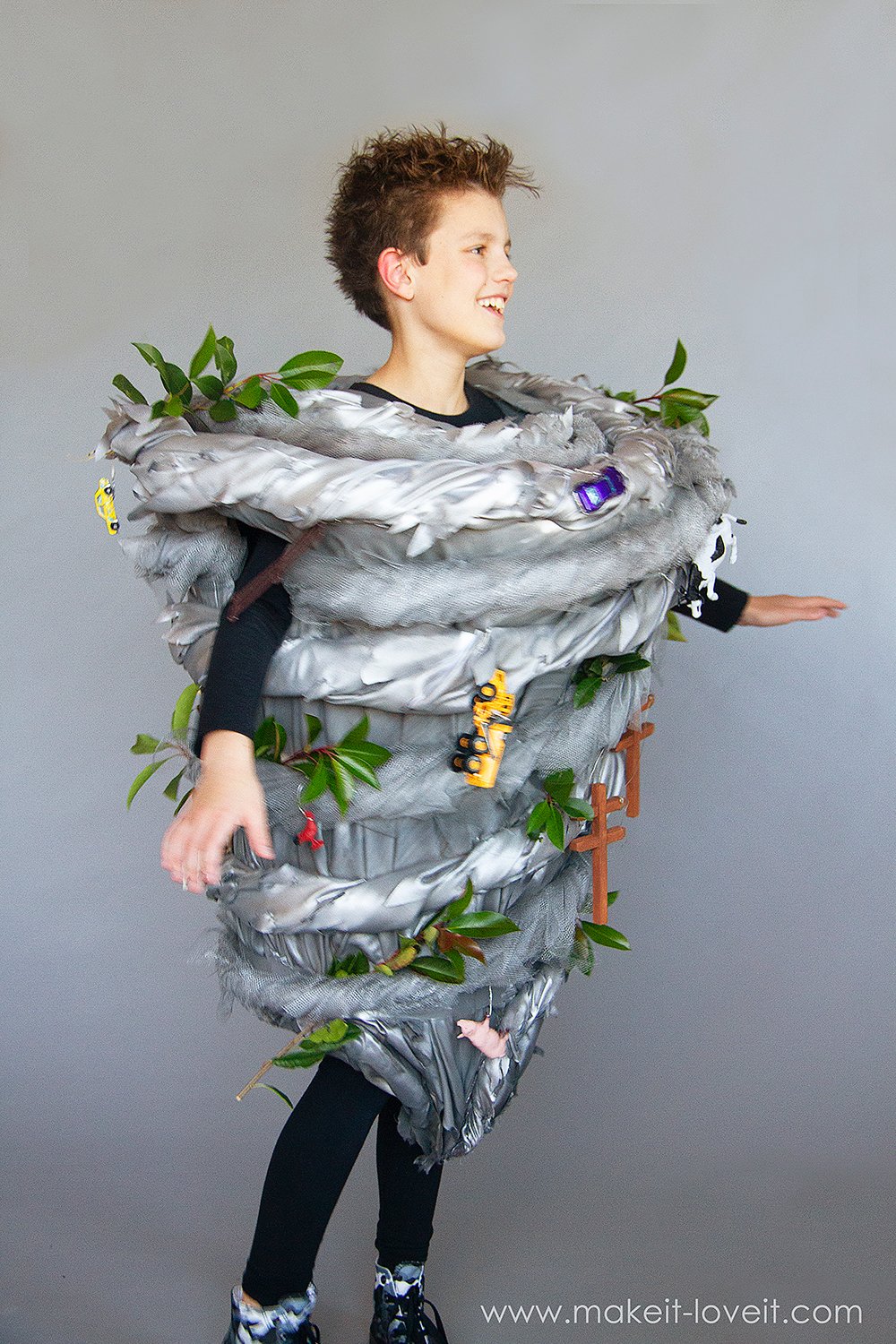 Anyway, that’s probably more tornado info that any of you wanted to know…..but that’s why Connor got super pumped about wearing this costume for Halloween!  And you’d better believe he got lots of laughs and fist-bumps walking around our neighborhood trick-or-treating.  Hey, it’s what you’ve gotta do when you live in a place like this! Haha! :) 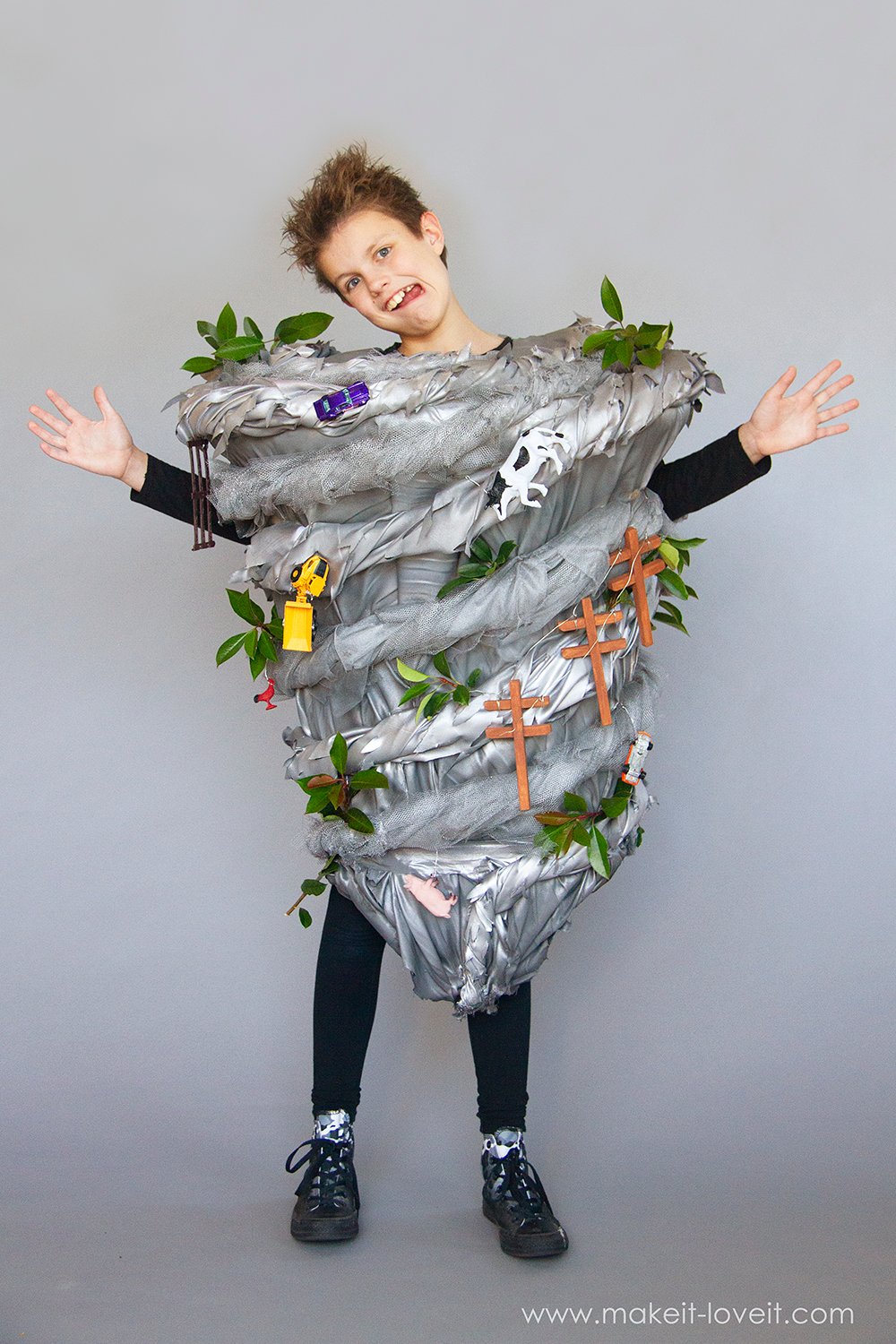 Do you want to make your own tornaod costume?  You know, to save for next year’s Halloween?  Or use for a school play?  Or a local parade?  You never know…..

Well, here’s what you need to get started…

And that’s it—your No-Sew Tornado Costume is complete.  Such a fun and unique costume for anyone of any age!

If you end up making this, send me some pictures.  I’d love to see!