HAPPY HALLOWEEN friends!!  Aggggh, I can ‘t even believe it….October is only hours away from ending!  And, ahem, I have only shared 2 of my 5 kids’ costumes so far…..blahhhh!  (I shared Ellie’s Rain & Storm Cloud Costume HERE and Chloe’s Rainbow & Sunshine Costume HERE.)  This year has just been bizarre though. And I’ve been off.  But that’s okay, some years are like that.  (Does anyone even care about costumes once November hits?  Maybe I should save the last two until next hear?? Haha!) But today is Oliver’s turn to join our weather theme, and I made him this Lightning & Storm Cloud Costume…that is completely NO-SEW!!!

It’s light, pretty quick to make, and the flashing LED lights are his FAVORITE feature! :)

This kid.  He cracks me up.  When we were brainstorming new costume ideas a couple weeks ago (trying to find something more simple because of this year’s circumstances)…..Oliver was definitely set on being lightning.  And that’s because lightening bolts, in his words, are “SO cool and SO LOUD!!” (Yes, we all know that it’s technically the thunder that’s loud…but he was excited, so just go with it.  Ha!)  He was also excited because lightning is DANGEROUS.  And once Oliver heard that he could have flashing lights on him, he was sold.  And didn’t want anyone else to try and claim his costume idea.  It was HIS! :) 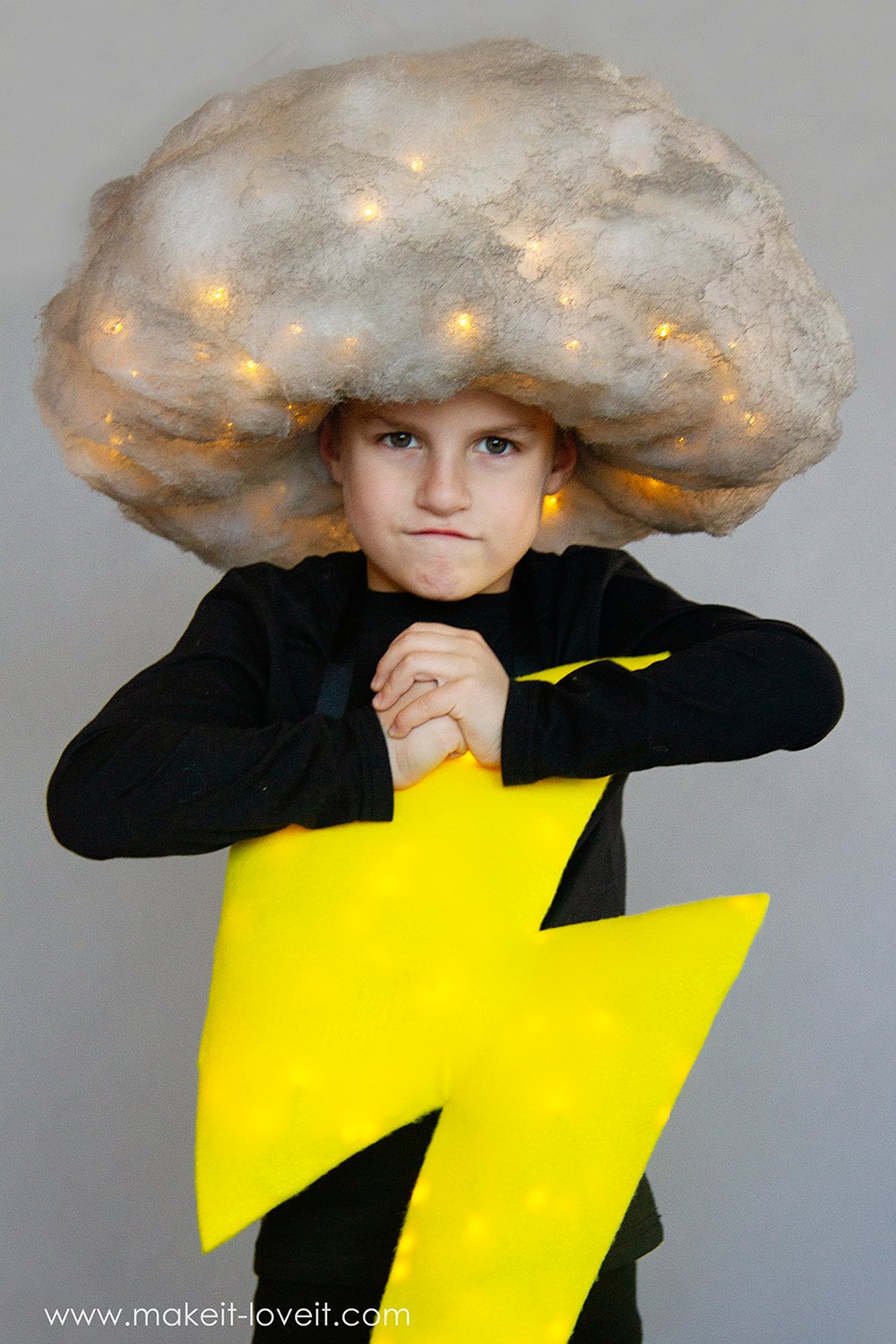 Once Oliver puts this stuff on, he walks around with super high knees, trying to create the biggest and loudest KABOOOOM stomps that he can!  (Lightning and thunder go hand in hand, remember?!) Hahaha! 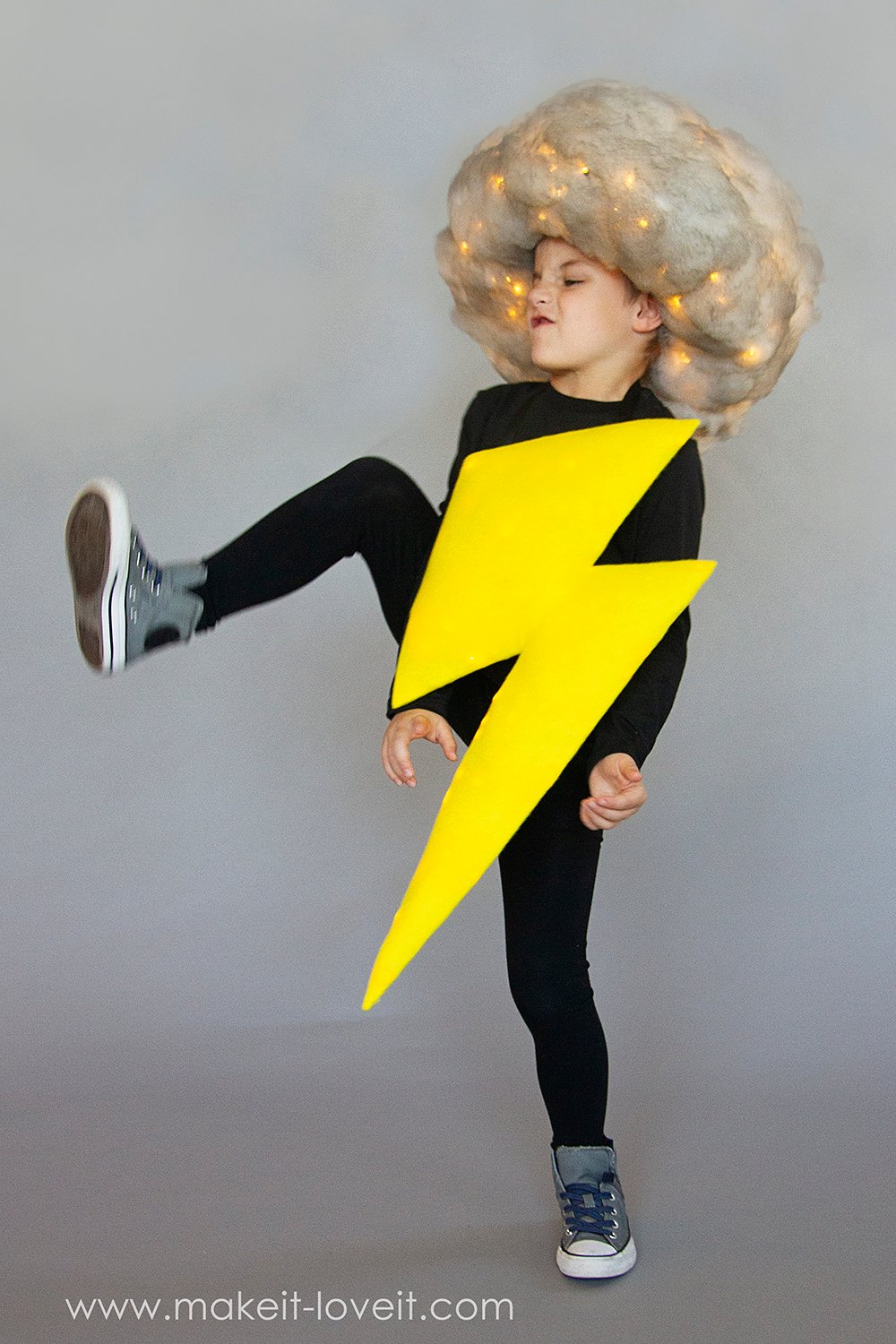 But once the surrounding lights are turned down a bit, you can see the magic of this Lightning and Storm Cloud Costume—-the flashing lights.  (I have them on steady while taking pictures.  But there are 8 different settings….and a couple of them look like lightning flashes.  It totally takes the costume to another level!)  Oh, and if you’re worried about losing your child while trick-or-treating…..this is DEFINITELY the costume for you! Ha! 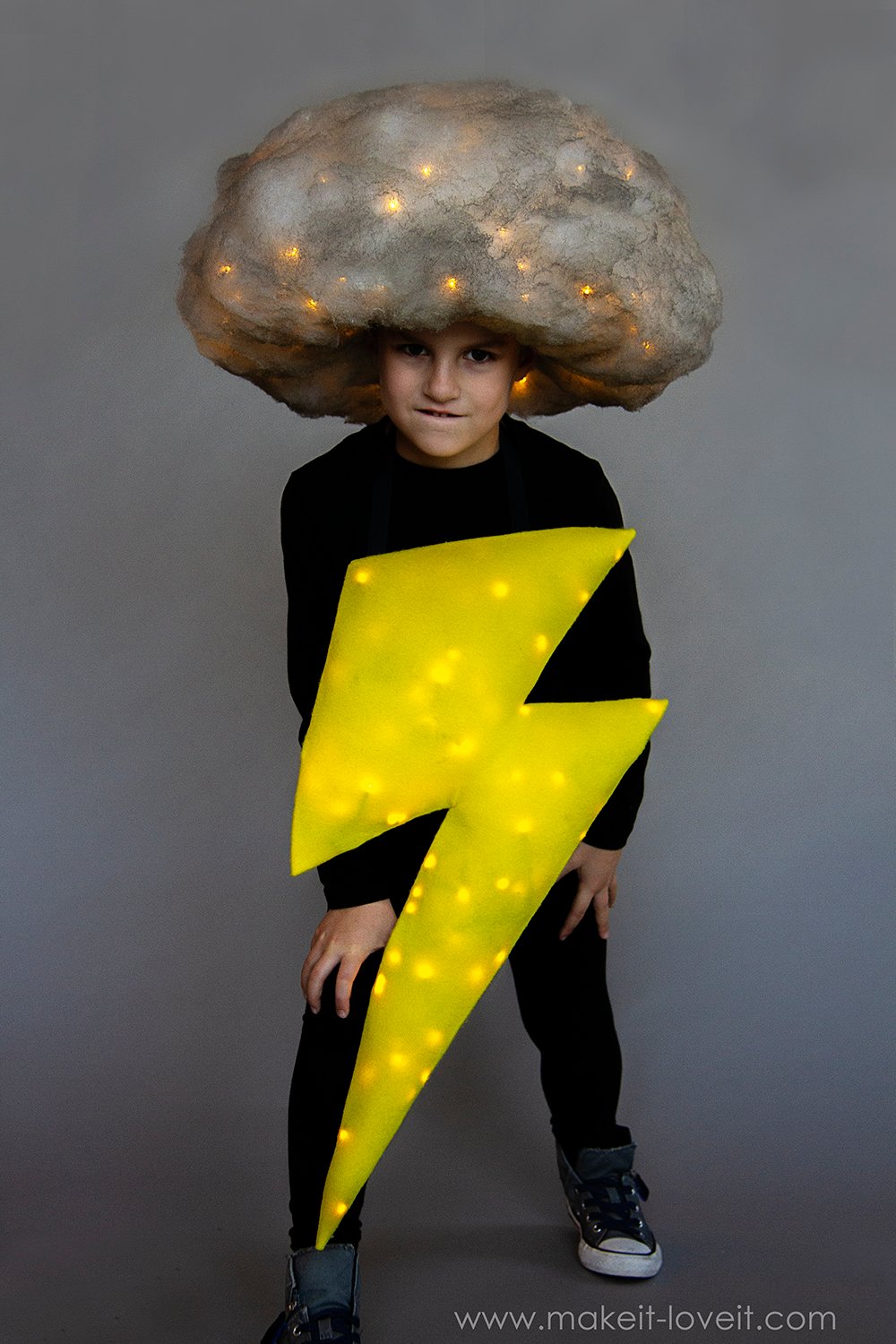 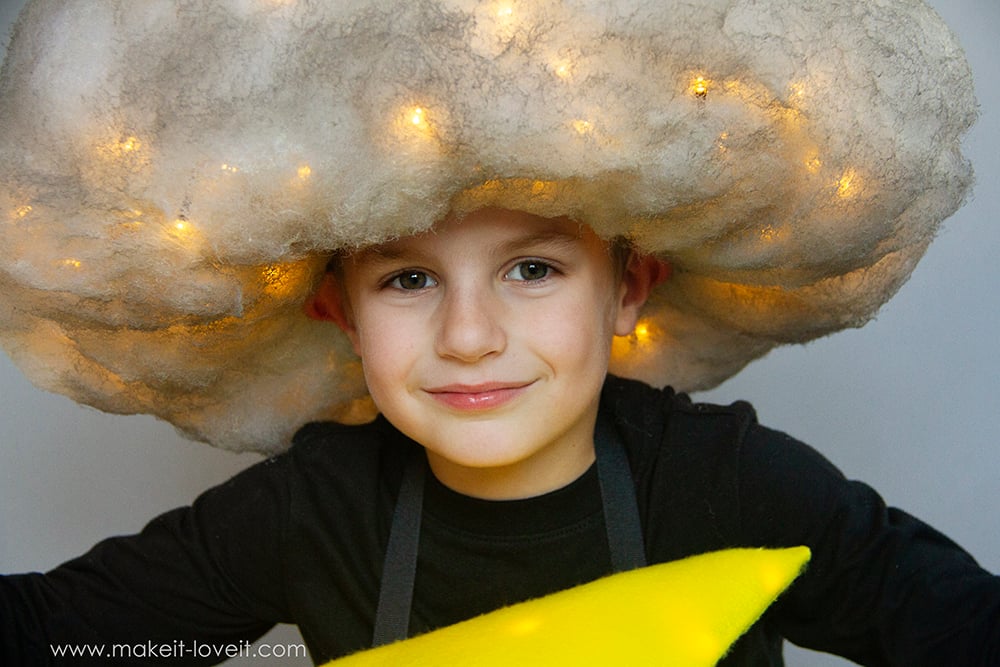 The stuffed lightning bolt is also very lightweight and just hangs around the neck…but has a stiff backing, to help keep its shape.

This is a great costume in super cold weather too…..since it can be worn over big coats and pants. 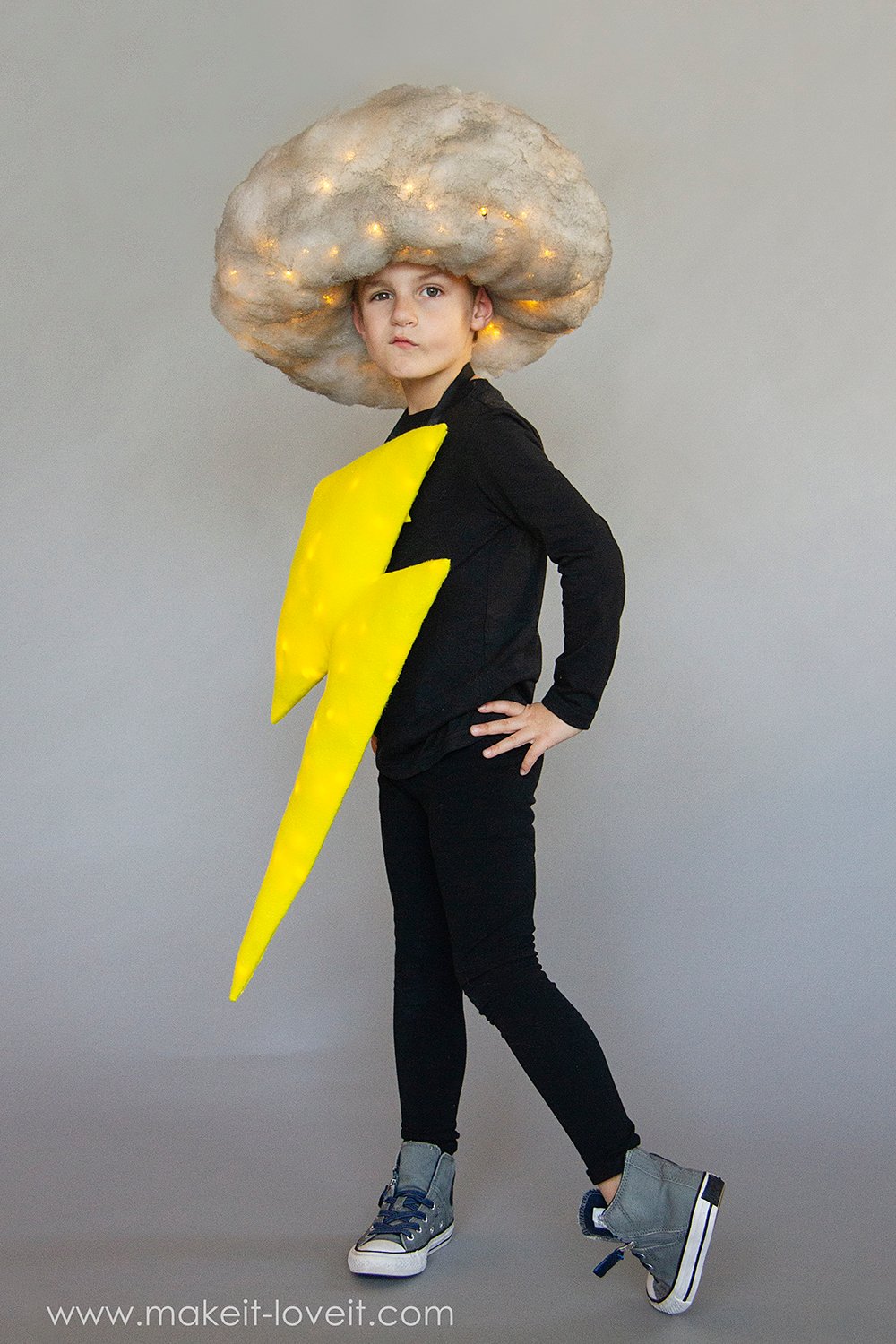 When you’re 5 years old and you kinda wanted to be batman for Halloween but your older siblings told you all the cool parts of being lightning (because they REALLY wanted to be a group theme)……you decide that you’re going to be the BIGGEST & BADDEST bolt of lightning there EVER WAS!!!!! (Hahaha, don’t grow up Oliver.  Ever.) 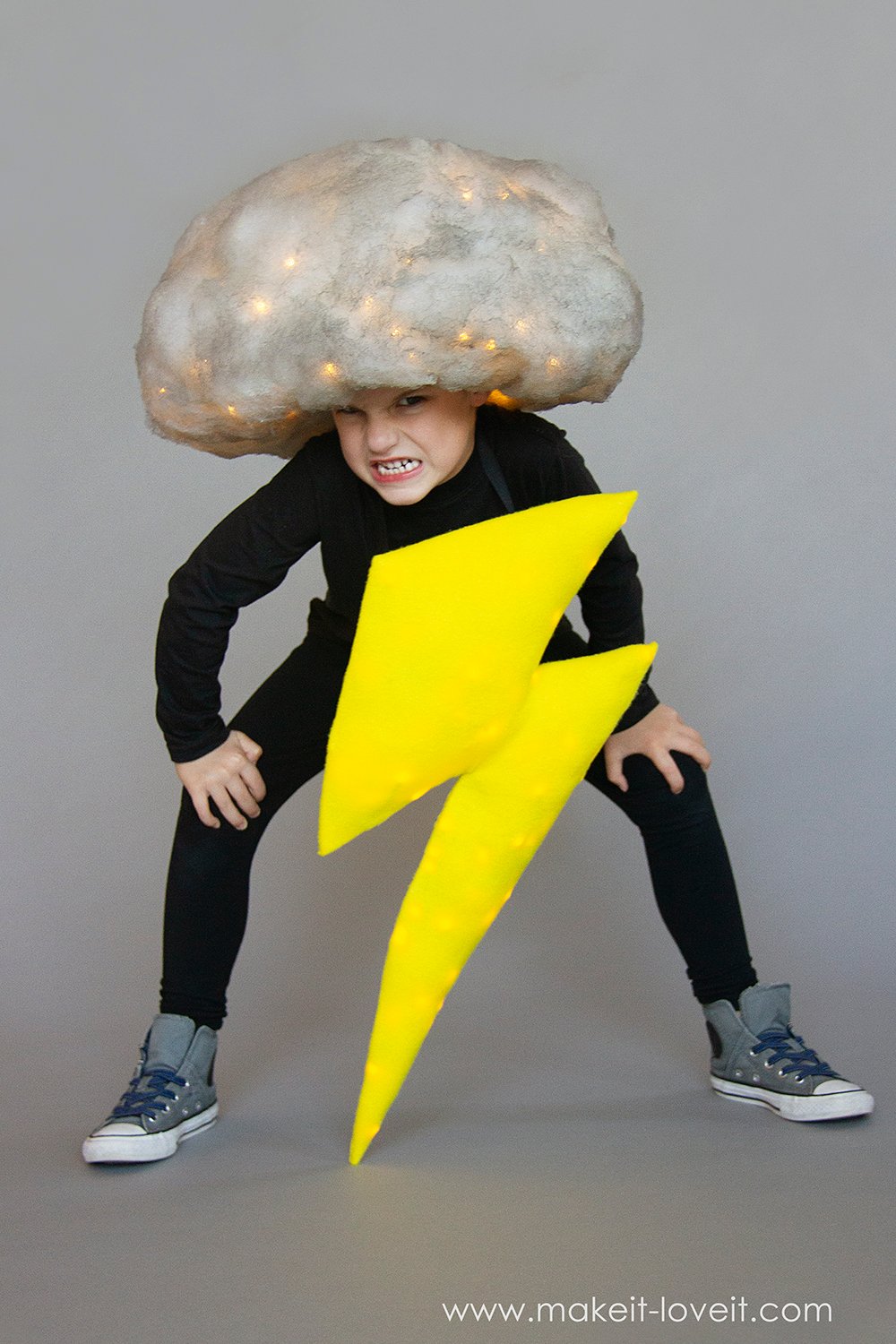 Aggggh……I can’t believe this is your 5th Halloween, Oliver!  I feel like I just barely dressed you up in that Lollipop Munchkin Costume, when you were a few months old!  Haha, that tuft of hair still cracks me up!  Or that BB8 Costume…..you were such a good sport walking around in that big ol’ thing, even though you were just a year old!  Okay, the funniest might have been the Strong Man Costume…….you were such a crack-up, and thought you were the COOLEST!  Oh, but wait…..the wooden goat hooves from the Greek Mythology Satyr Costume last year, those were pretty hilarious too!

You’re such a good sport Oliver!  I’m so glad you love dressing up like the rest of your hooligans siblings! :) 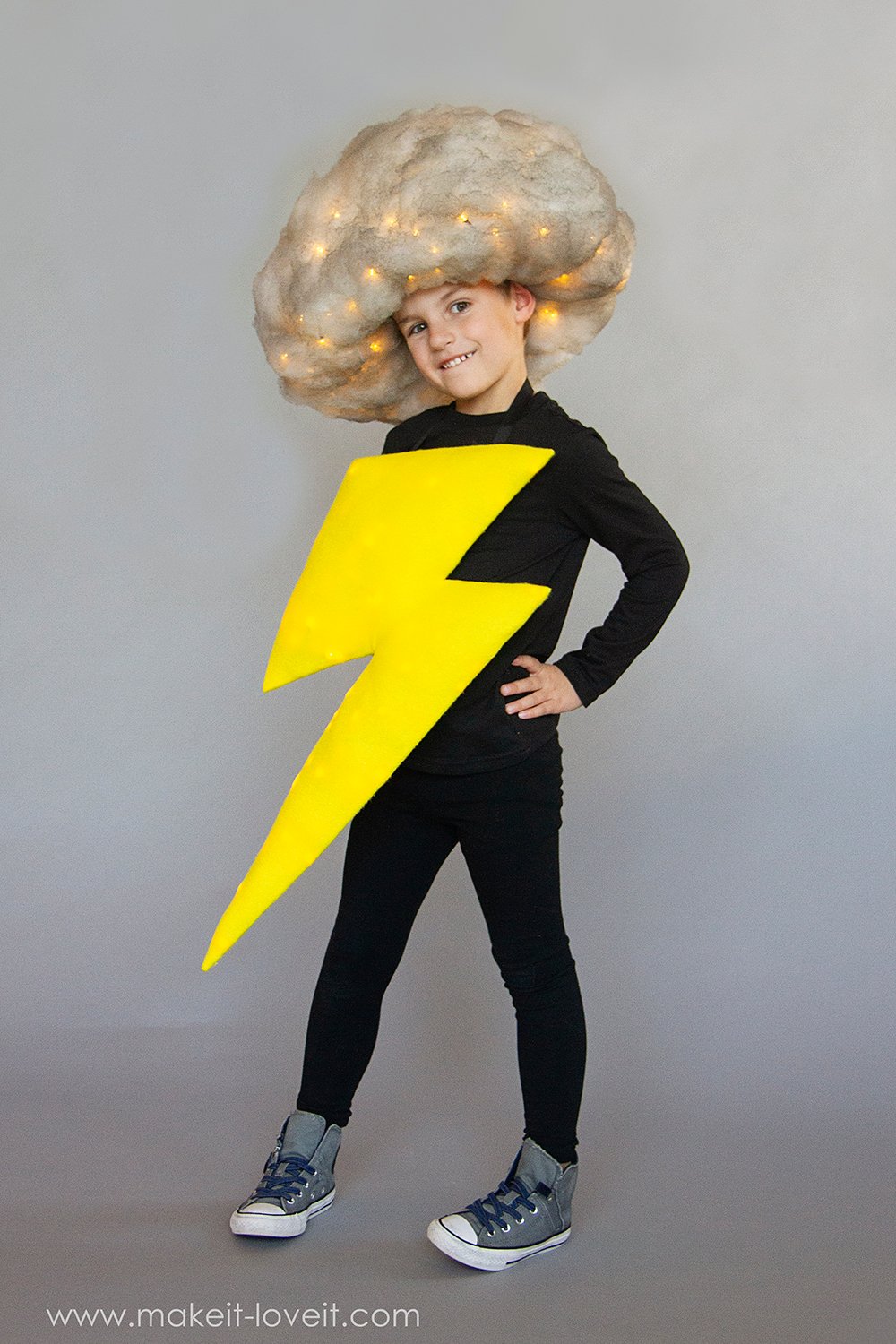 Remember, there’s not one bit of sewing, so don’t even worry about that. 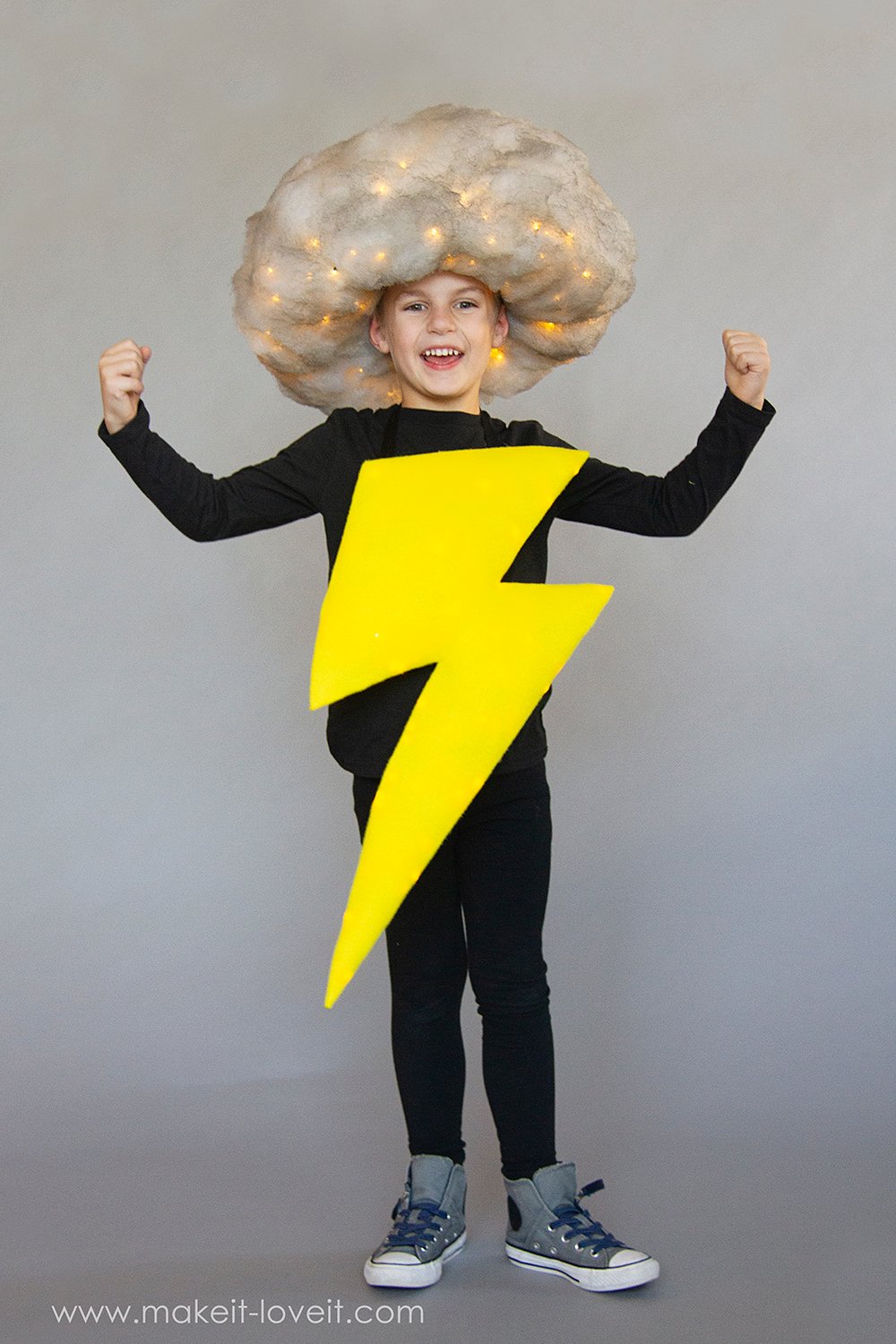 The coolest little Lightning & Storm Cloud Costume, you ever did see! 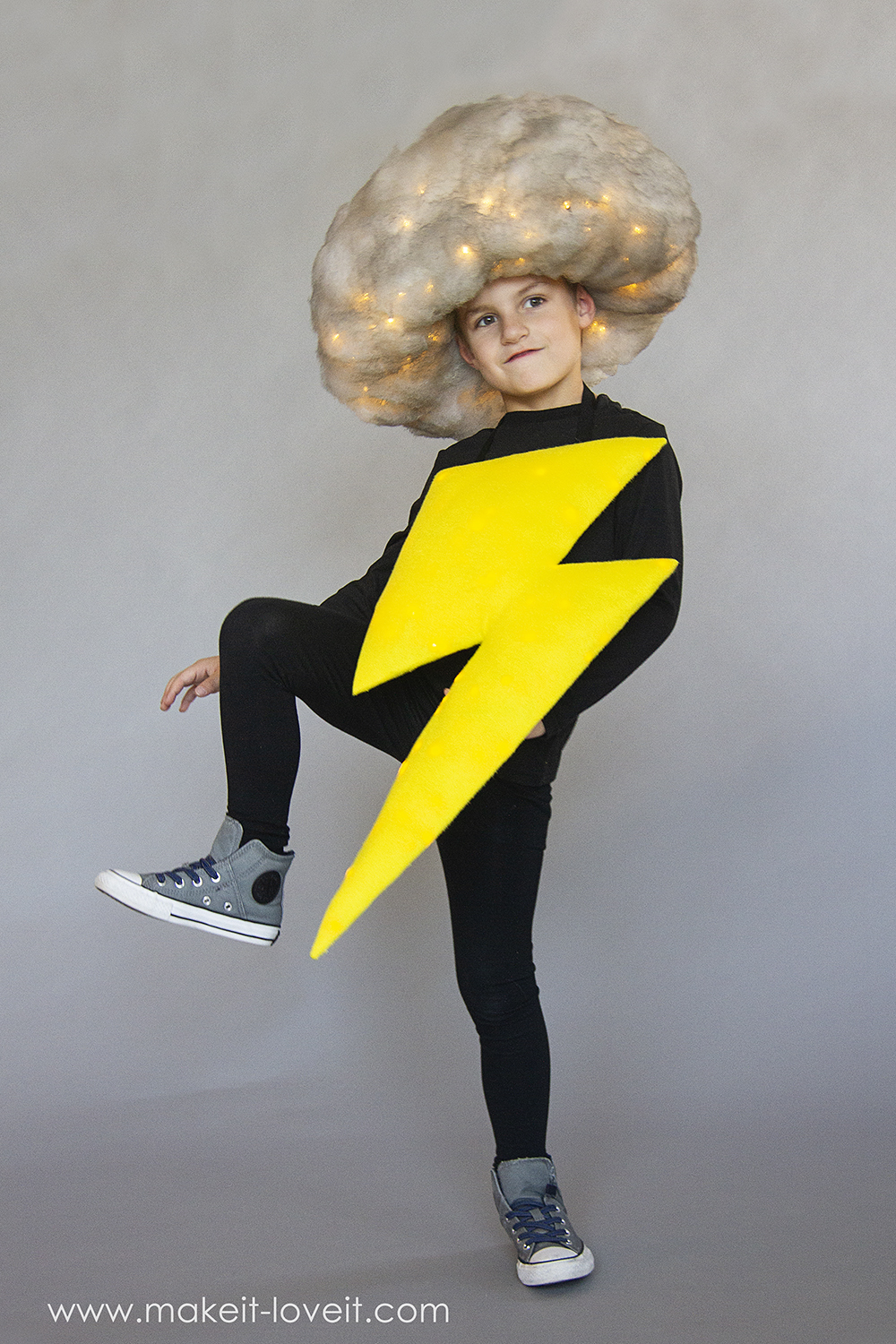 How did it go?  Did you finish?  Let me know how it turned out…and send me pictures!  I love seeing how your costumes turn out and who you end up making them for!  It’s probably my favorite thing about this whole blogging thing…..seeing how the tutorials worked out for you!! :)