Oh. My. Word.  I haven’t laughed so much at a costume….maybe EVER!!  I know I said I couldn’t stop laughing at Max’s Lion Circus Costume from the other day….but that was more “oh-my-goodness-this-kid-is-so-stinkin’-cute-I-could-eat-him-up” type of laughing.  Today’s laughing is more “oh-my-goodness-my-eyes-are-playing-tricks-on-me-is-this-thing-for-real” type of laughing! Once Connor tried on this finished Circus Clown and Bear Piggyback Costume ……..we all DIED LAUGHING!!!! :)

I do have to say, Connor’s costume request for our Halloween circus theme has changed several times.  He was going to be something completely different until we came up with this idea…..and then don’t tell Connor, but I was crossing my fingers the entire time I was making it, hoping this thing would work! 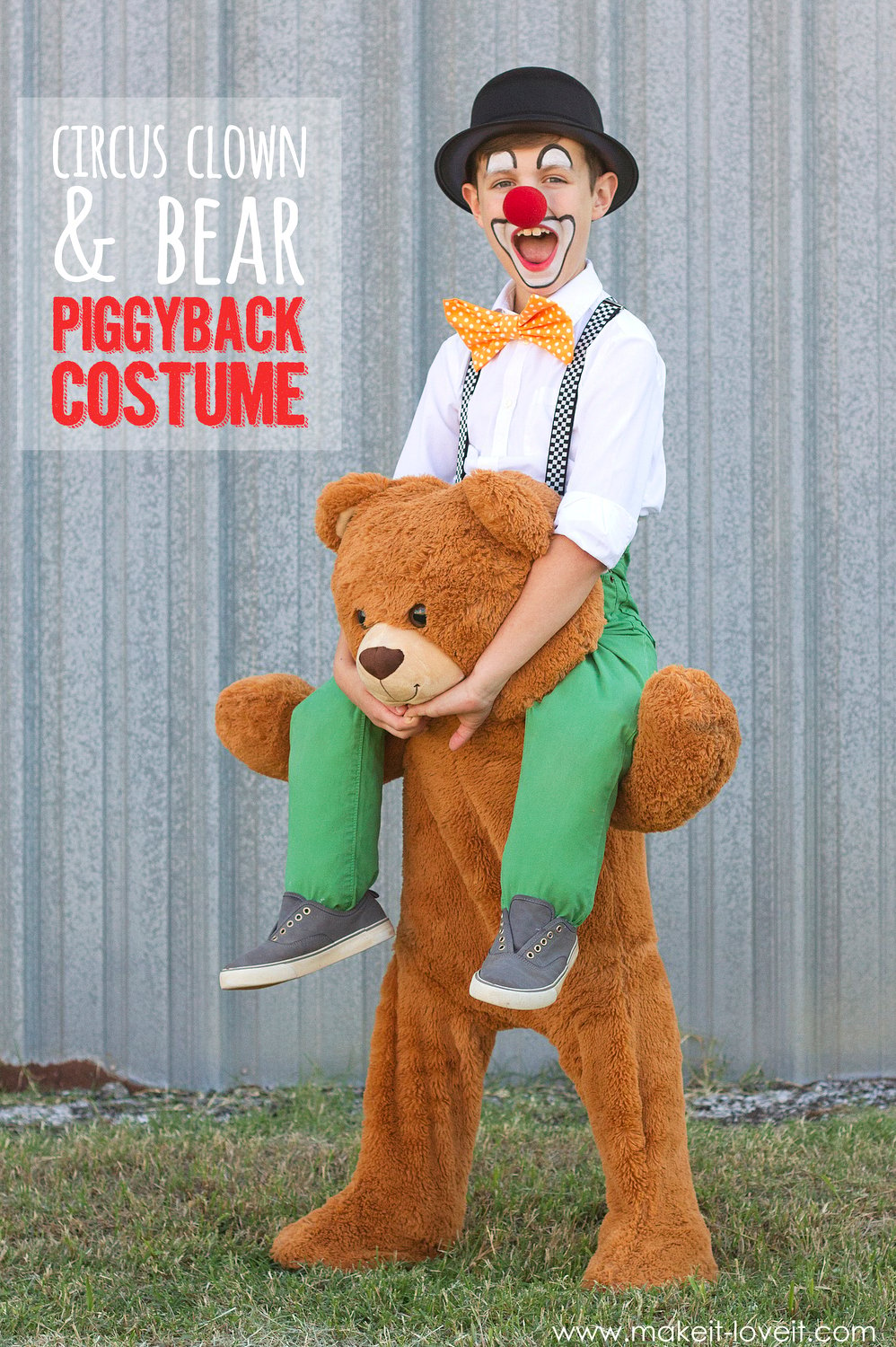 But, how fitting is this for the Circus, right?!  I mean….it’s wacko, super obnoxious, and kind of unbelievable.  That’s what the circus is all about, right?!?! 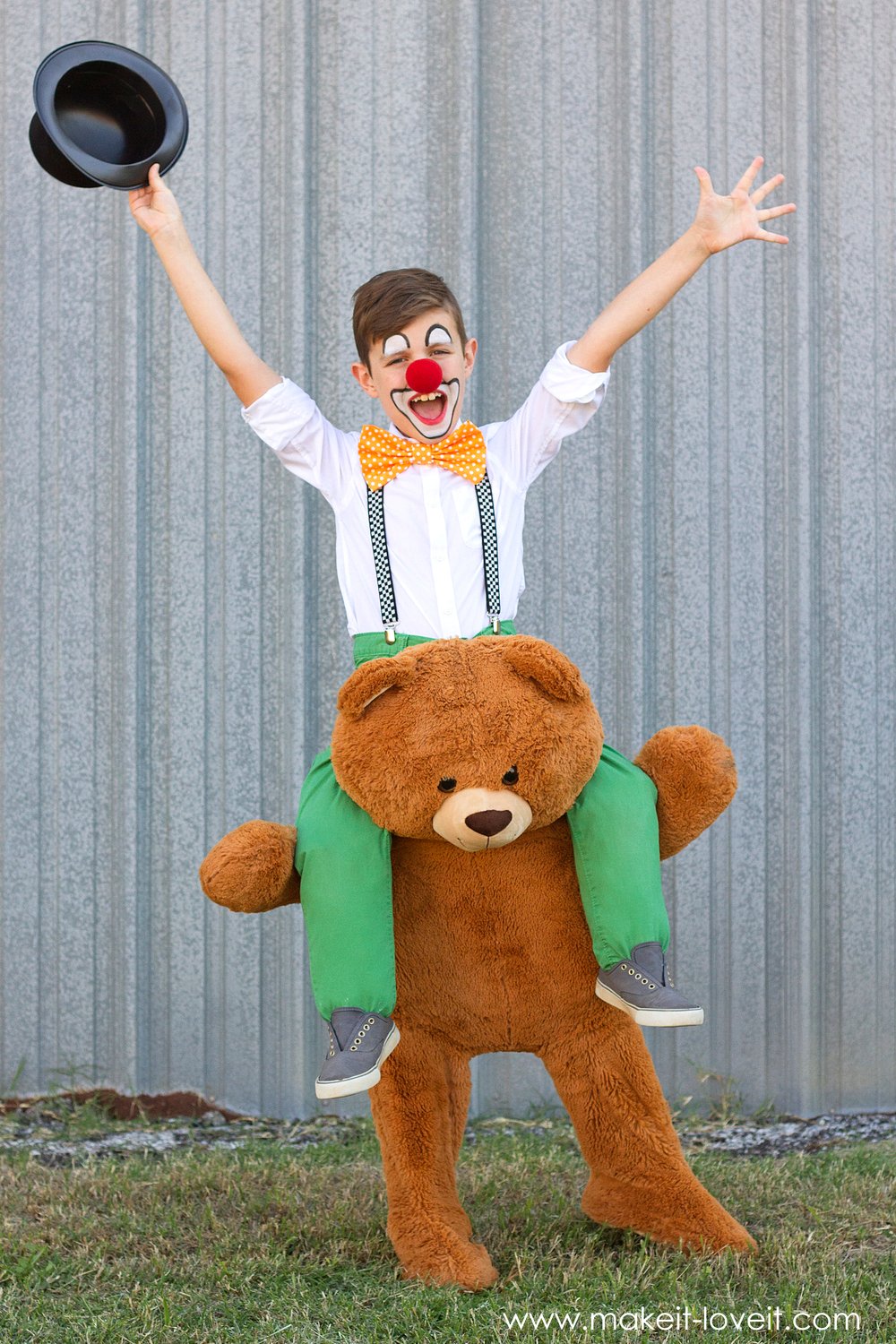 I’m still trying to figure out how he convinced this bear to let him ride up on his shoulders though!  But Connor just holds on tight with his arms and legs……and goes wherever that circus bear goes! 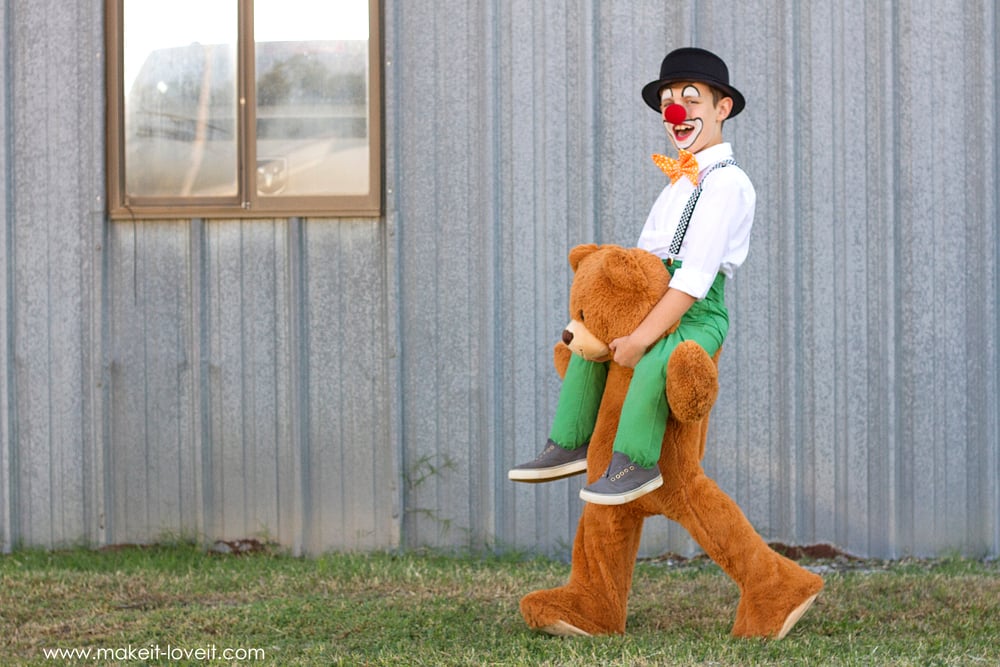 And when that bear dances…..Connor boogies right along with him!!  (Oh you guys, those green legs just kinda bounce and kick around….and make the whole thing seem so dang realistic. Ha….it’s so trippy to watch!) 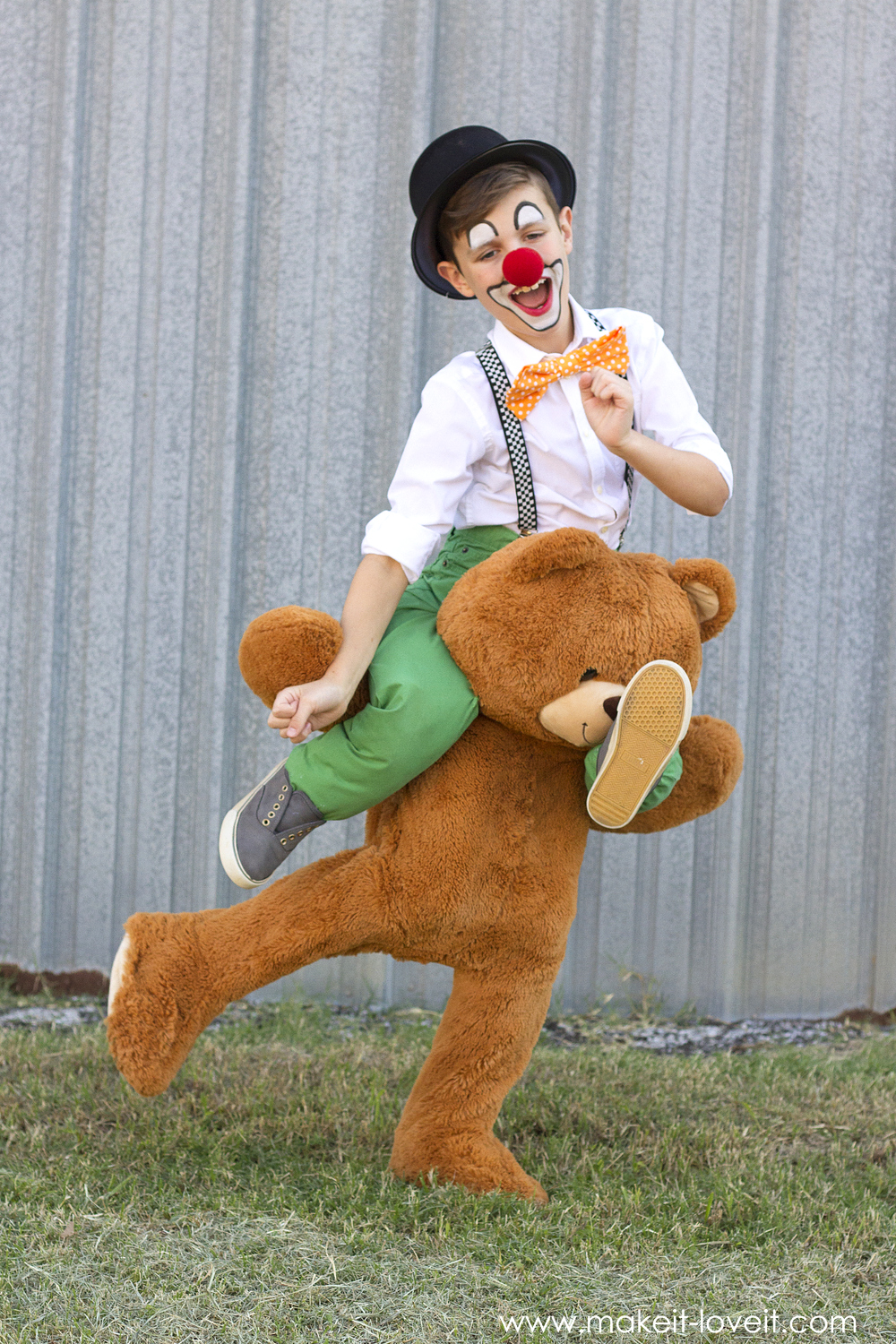 Connor and the bear have even been preparing for their circus act….which includes some tricks with his hat!  But wow!!!  Connor’s balance up there on that bear is truly astonishing!  No wonder they are part of the circus! 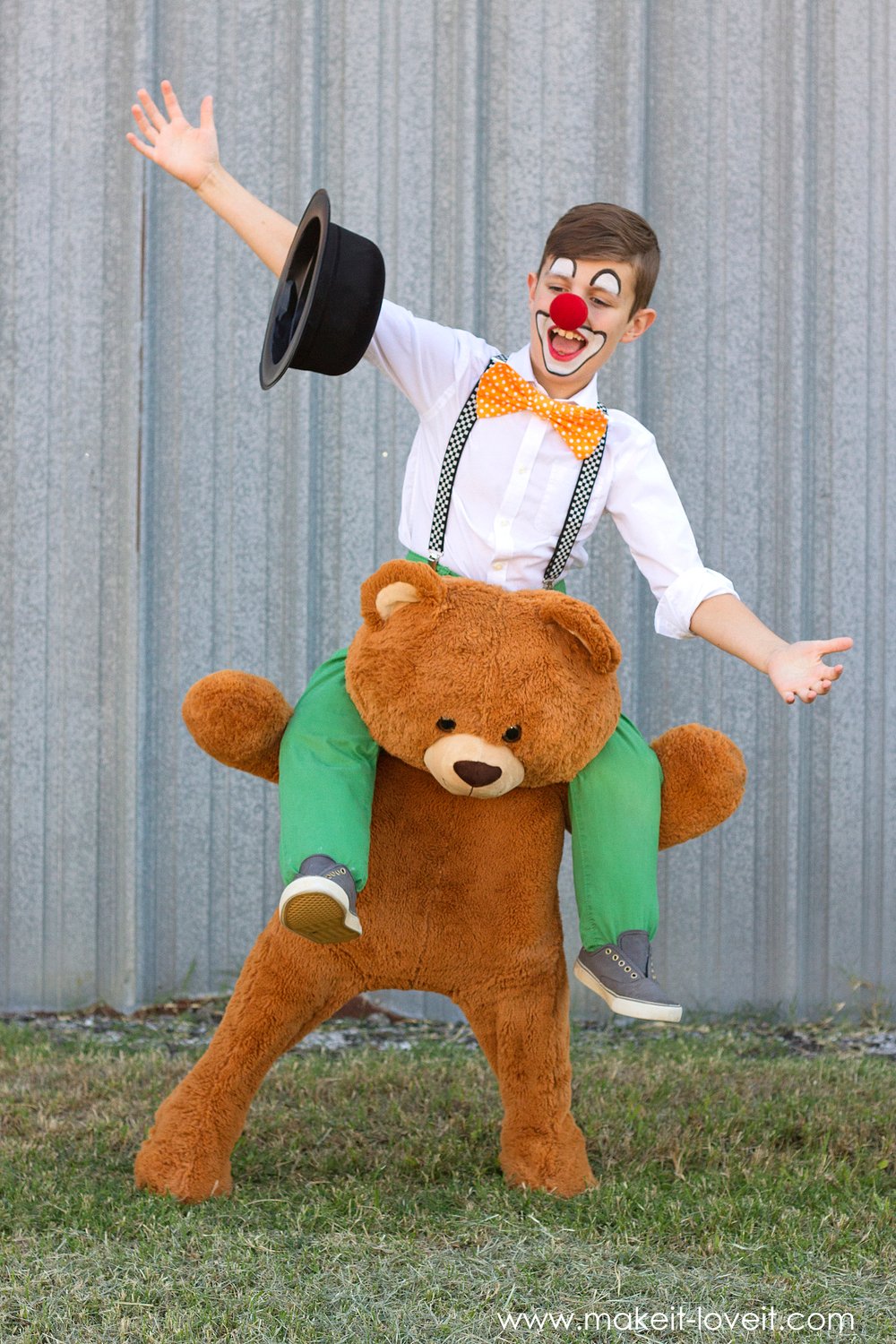 And in case you’re wondering what the “Circus Clown and Bear Piggyback Act” looks like from behind…..yep, the clown is balanced right up there on the bear’s shoulders!  (I’m still laughing at that little “bum shape” that we created in those green pants.  That took some trial and error, but ended up being an easy solution…..and the end result is so much better than a flat bum!!!) 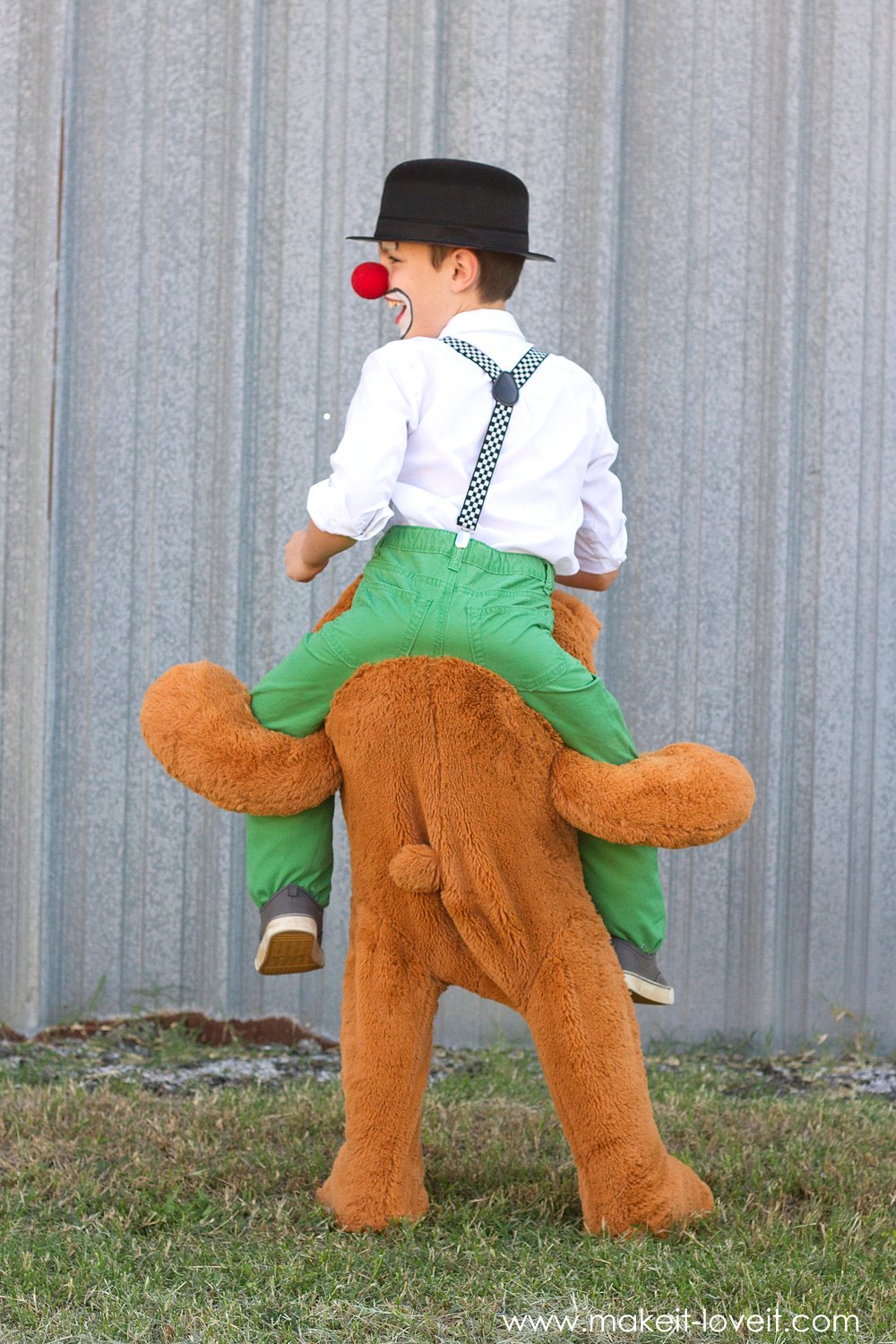 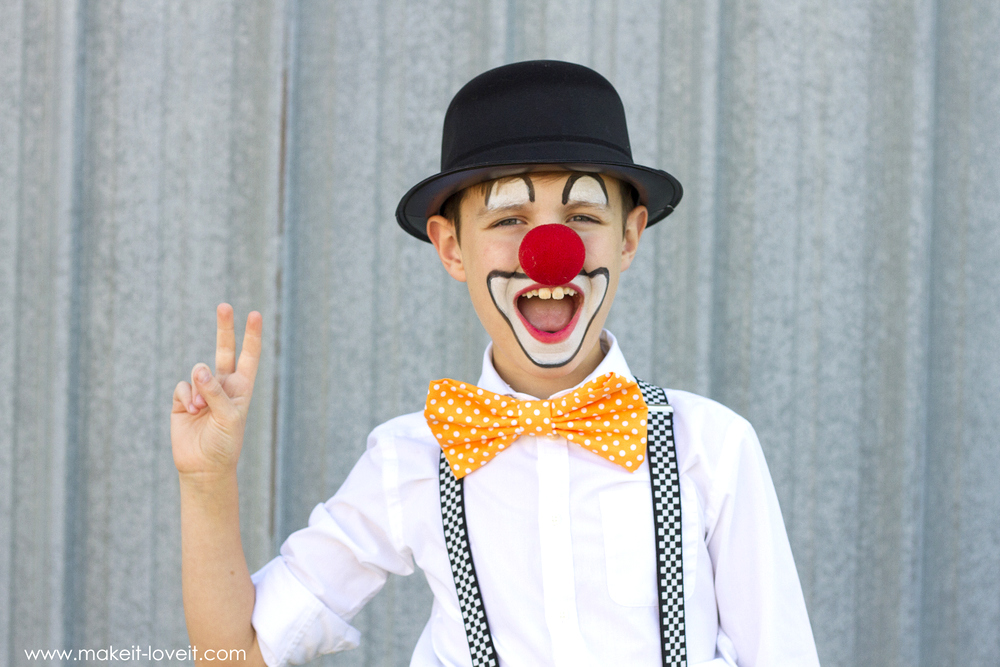 But enough chatting…..these two have a few circus events to attend!  Farewell, my friends! 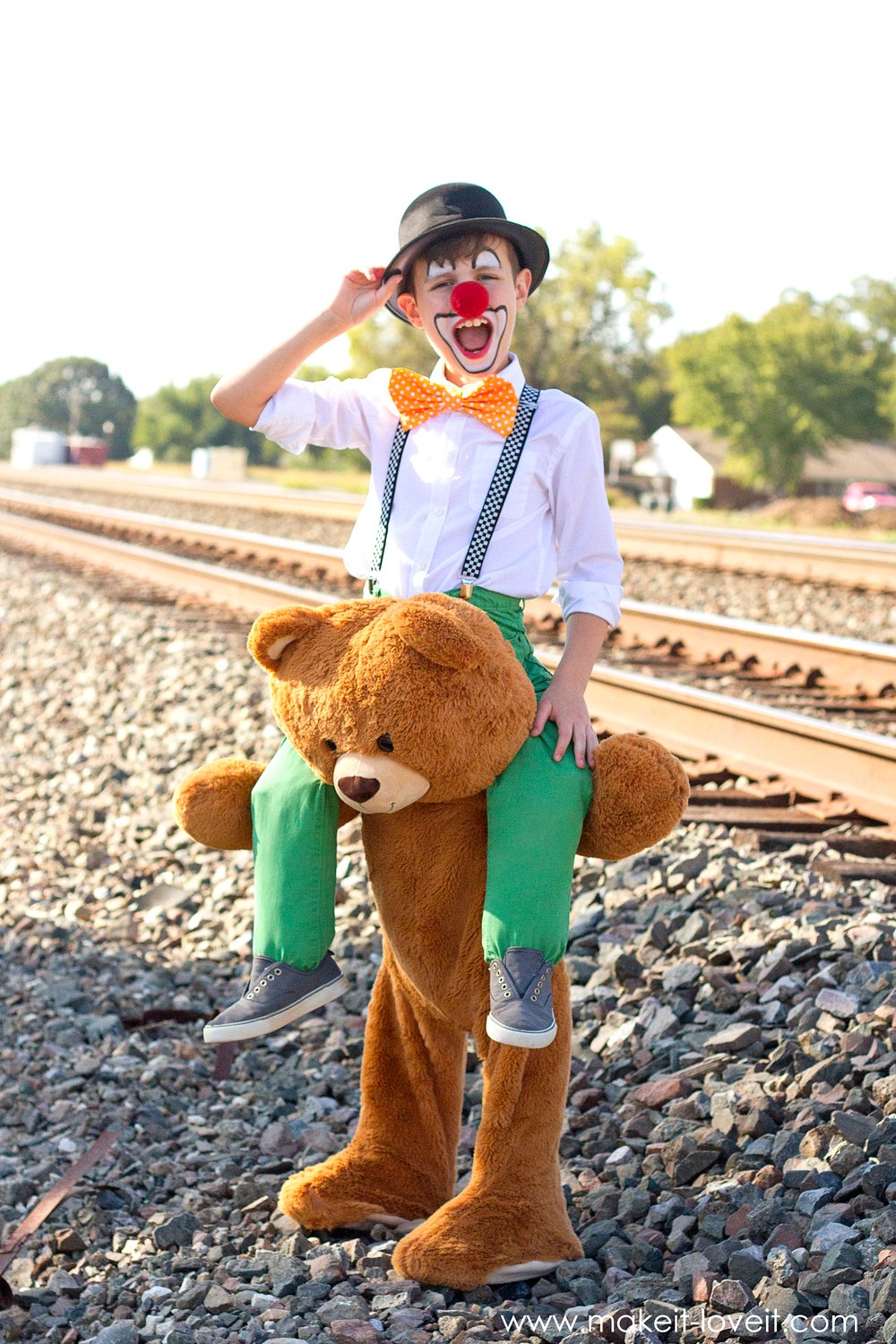 Off to the next train stop.  (Maybe I should tell that poor bear to let Connor walk.  He has 2 perfectly good legs of his own, you know! Ha!) 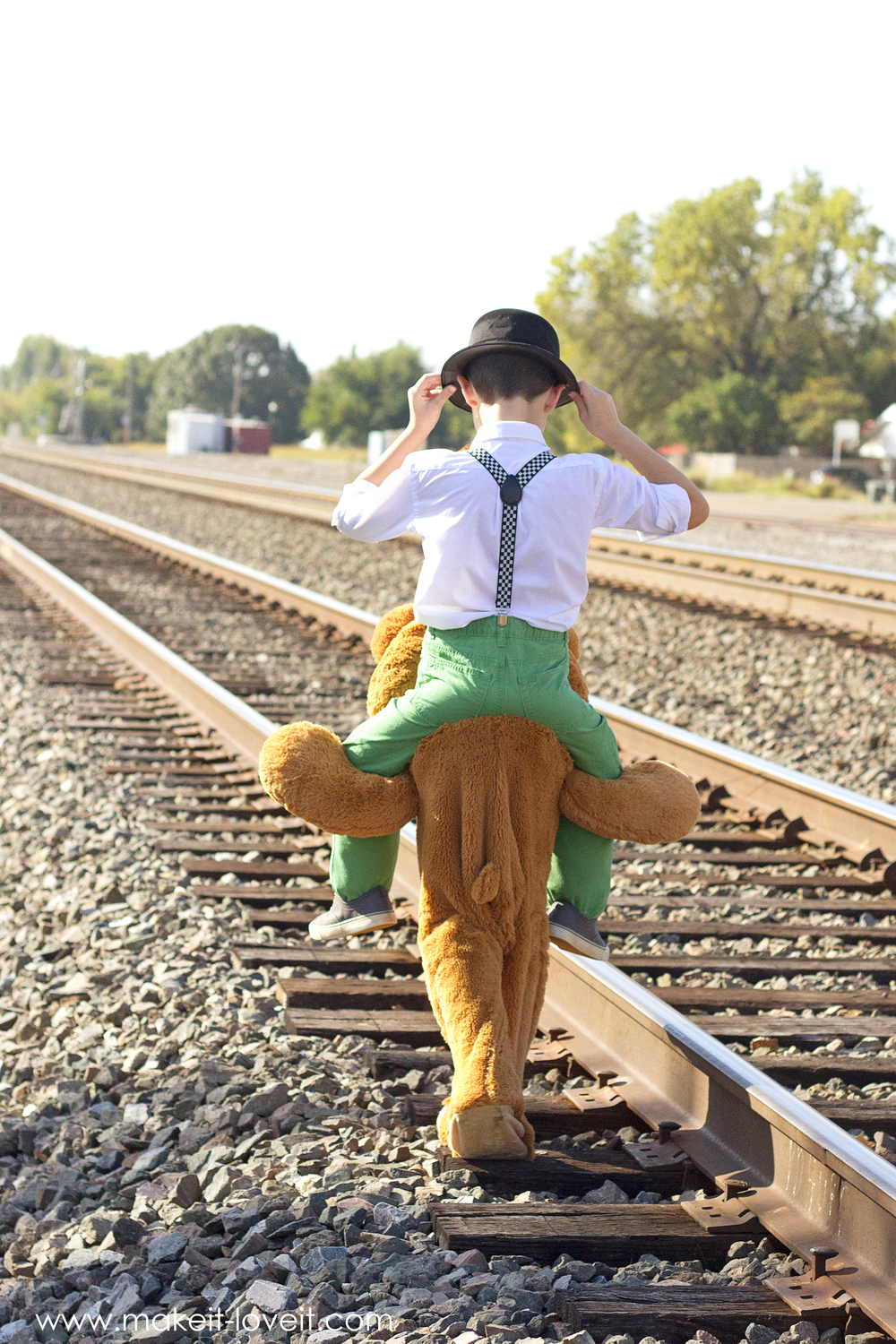 Hahaha…….SEE?!?!  It’s funny how your mind plays tricks on you and that bear seems legit, right?!

After we finished taking pictures this morning and Connor actually saw these pictures on my camera……he busted up into fits of giggles as he scrolled through each one.  He hadn’t actually seen it from our perspective (especially in motion), since he’s been the one wearing it!  He must have told me a trillion “thanks you’s”….and then over and over again how much he loves it! Such a sweet kid….but let’s be real, now I want one in my size!!! :) 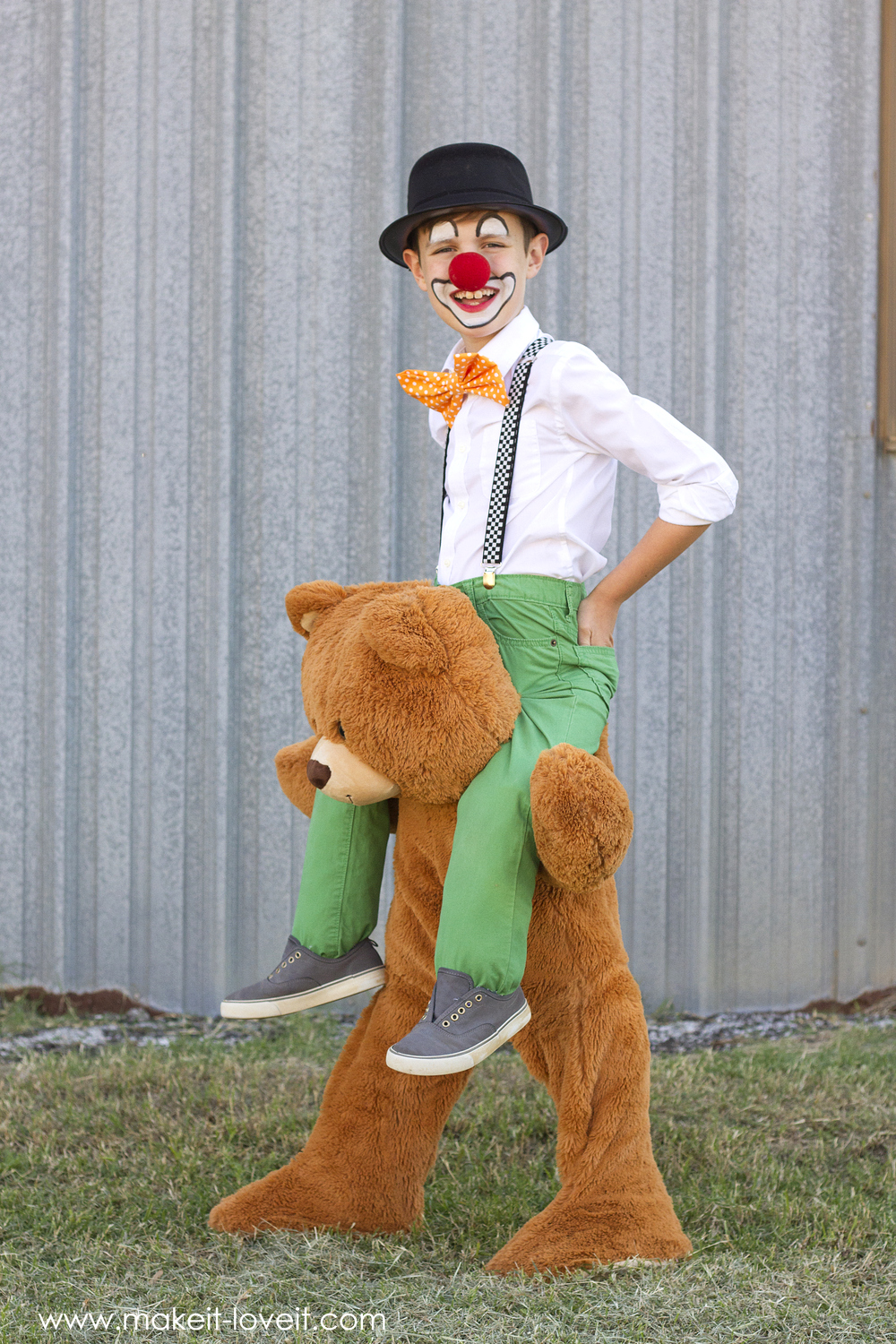 Want to give this Circus Clown and Bear Piggyback Costume a whirl?  Almost everything you need can come from stuff you have around the house.  And if you don’t have some of the items needed…..head to the thrift store, like STAT!!!!!

Okay, these directions won’t include exact measurements, because your bear might be different from mine and your subject might be a different height, etc…..but use this as a guide to see how to create your own costume!

Cut your bear along the back, at the base of the head.  Then start pulling out stuffing from the body and legs.  Leave the stuffing in the head and arms. 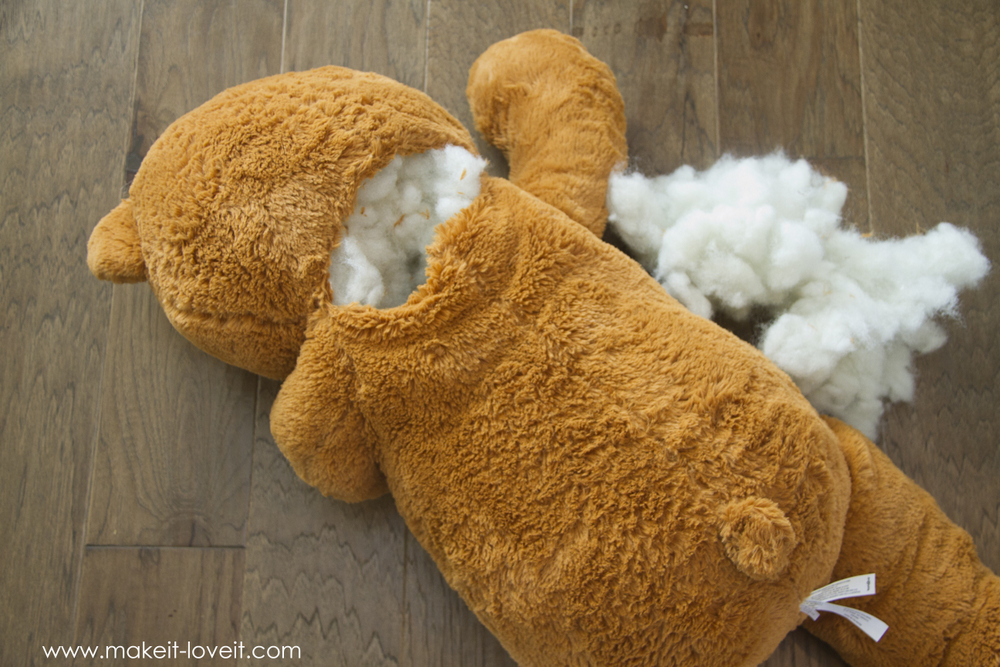 Then, cut kind of a half circle down from the slit you cut at the base of the neck….making an opening large enough for your subject to step inside.  The opening should be big enough to fit around your suject’s waist. 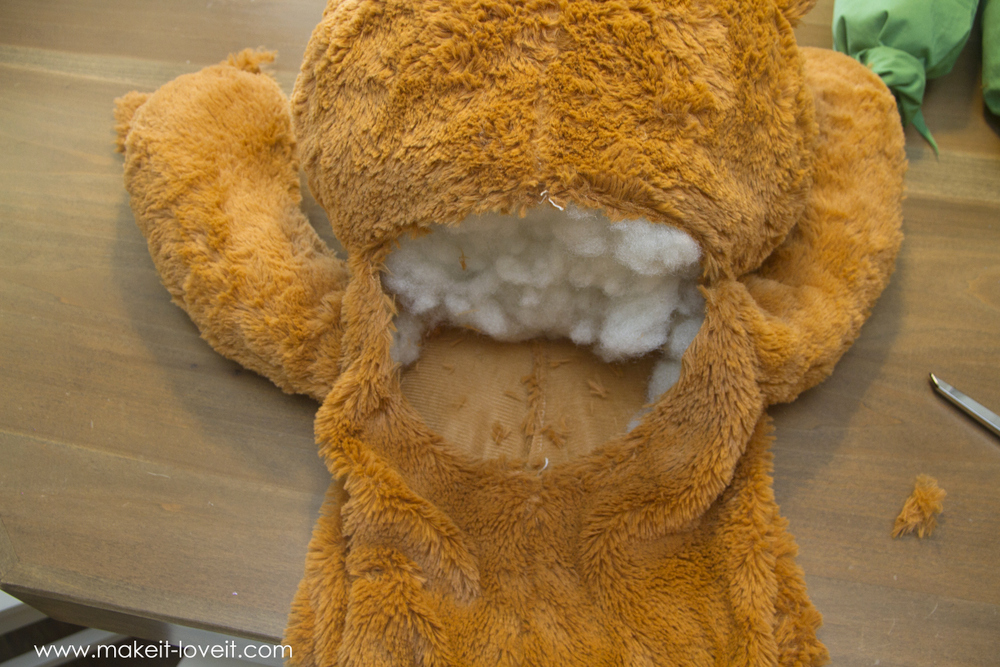 Next, you’ll be cutting out the crotch of your pants.  This shape isn’t an exact science and can still look slightly different from mine and still work….but what I found best was to create a circular shape out of the front and back of the pants, with the circular shape at the front of the pants slightly bigger than the cutout from the back.  You don’t want to cut off the zipper since you’ll still be using the button and zipper of the pants as the way your subject gets into this costume and secures it closed.

Then, I stuffed each leg with batting (from the bear) to give the pants some shape, so I could bend the pants at the “waist” and see how it would all look.  The amount of stuffing can be adjusted later….this was just temporary to give it shape. 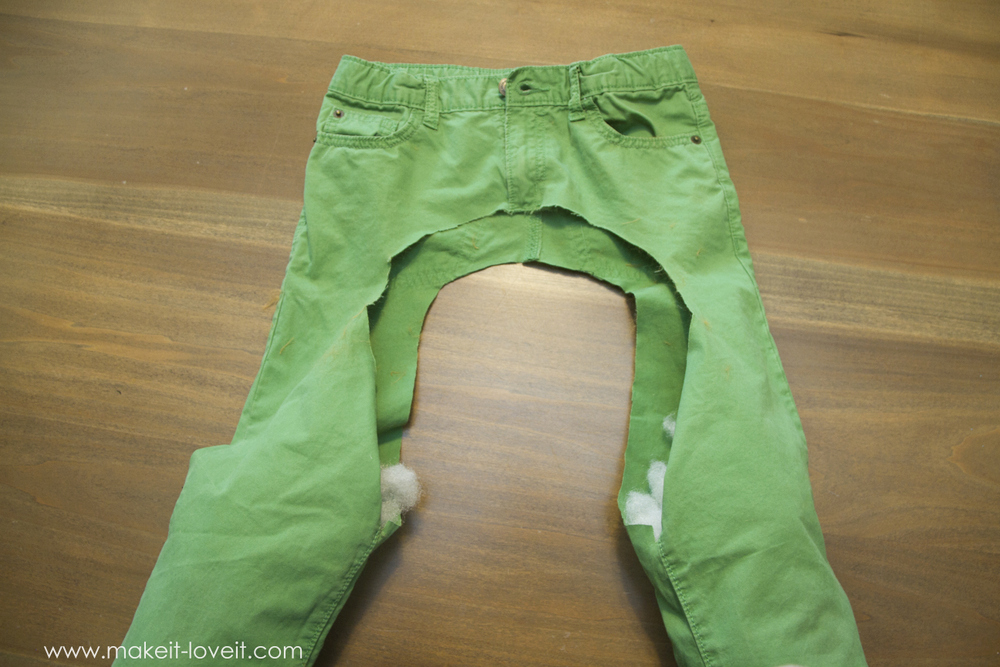 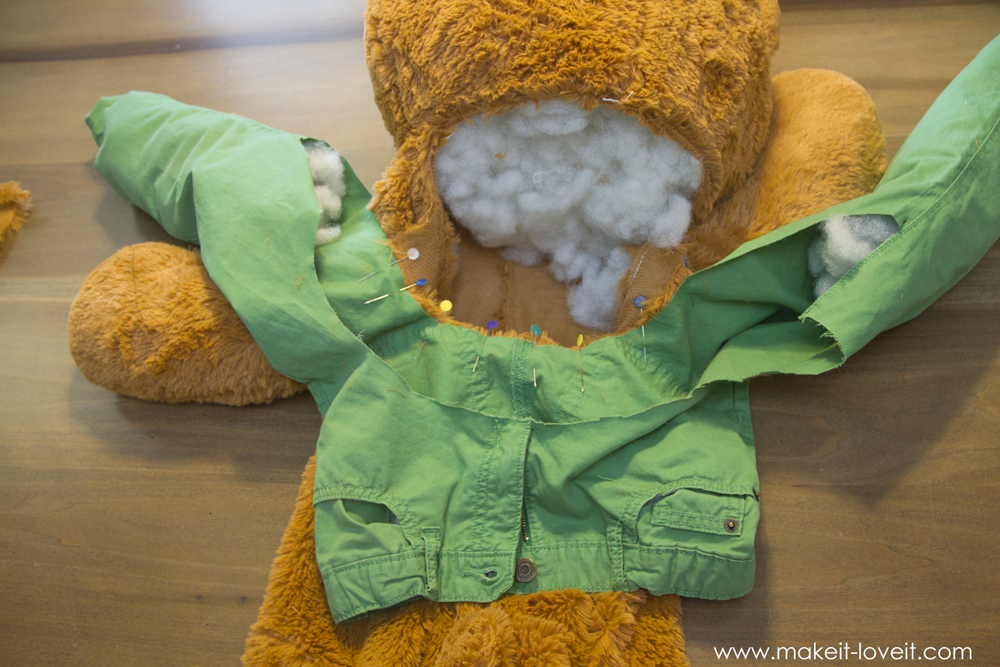 Next, pin the front of the pants along the opening at the base of the bear’s head and pin together with RIGHT sides together.  Sew together using a 1/4 inch seam allowance. 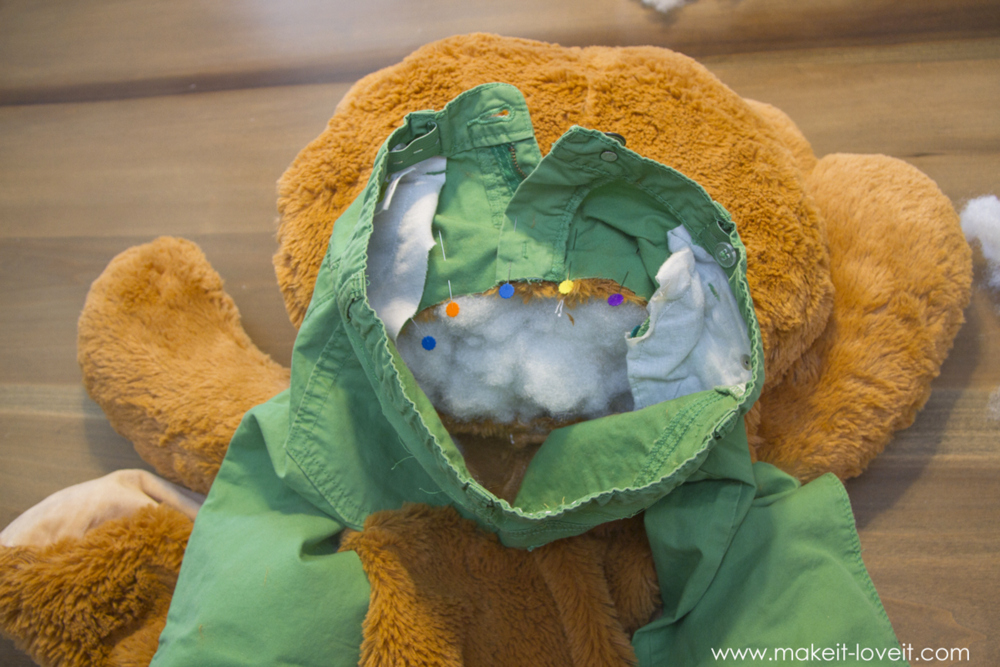 Now, have your subject try it on, putting their legs down into the bear…and the pant legs hanging down on either side.  Have them hold onto the bear head so it doesn’t flop down, to give you an idea of how it looks and how the pants are sitting, etc.  Also, the waist of the pants will be worn much higher than normal (at the belly button or slightly higher)….to give the look that the person on top is much shorter than they really are, and to help with the illusion. 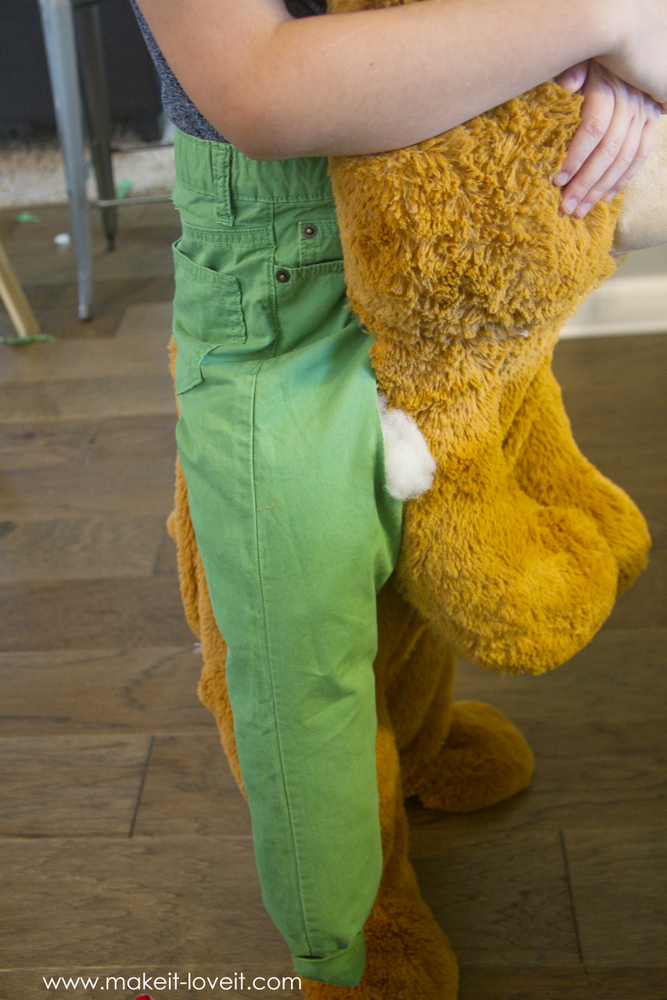 Next, you want to give the pants some creases, right where the leg would bend at the hip socket, and right around the neck of the bear.  Hand stitch the creases in place, so that the pants stay “bent” at the hip. 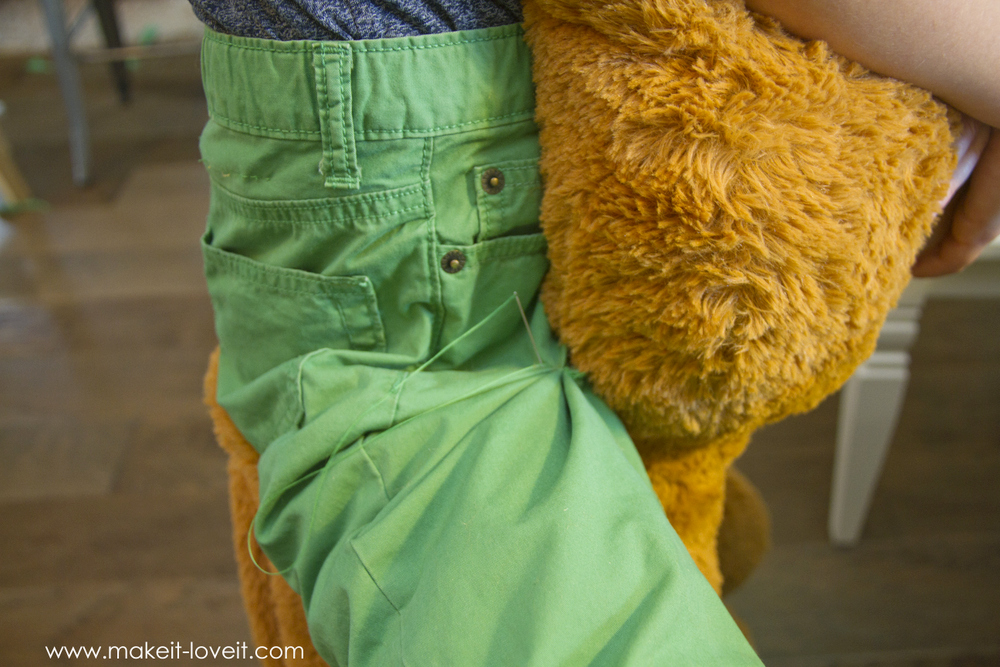 Now, if these pants are actually long enough to fit your subject normally, then they’re probably too long for the look of this costume.  (Because the character sitting up on top of the bear has a shorter torso, so proportionally, they need shorter legs too.)  So fill the legs to a good length (just kind of eyeball it, but probably several inches shorter than the full length of the pants) and tie off with some rubber bands. 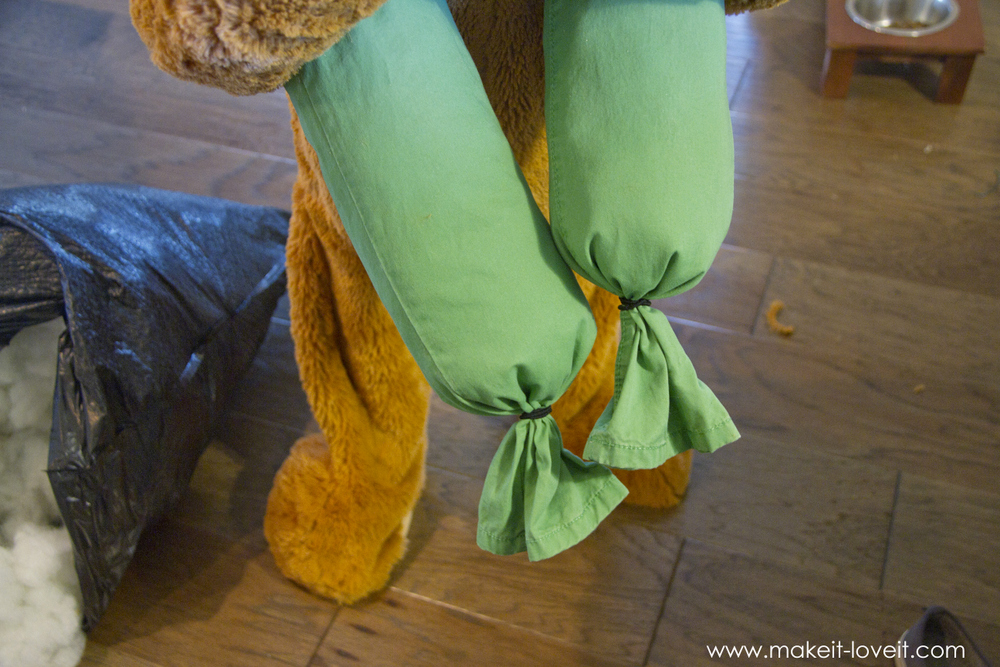 Then, use plenty of hot glue along the inner edge of each shoe and attach them the end of each pant leg. 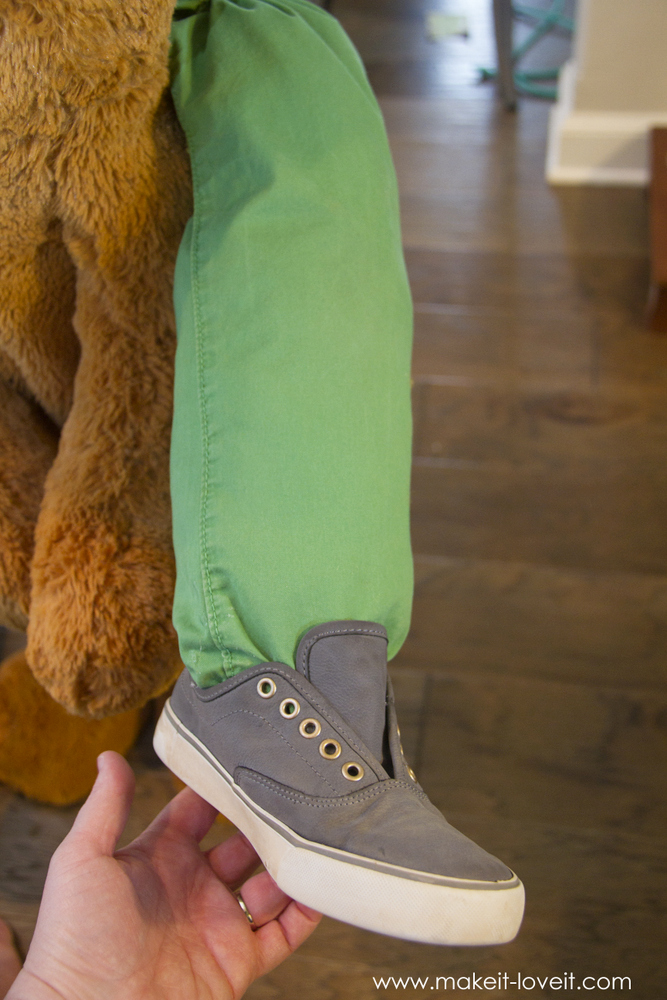 Now, here’s the secret for the “bum” shape.  Slice a pool noodle in half length wise and slide it into the pants, making sure it’s long enough to curve out the shape of the bum but also to extend out into each pant leg, stopping right about where the “knee” would be in the pants. 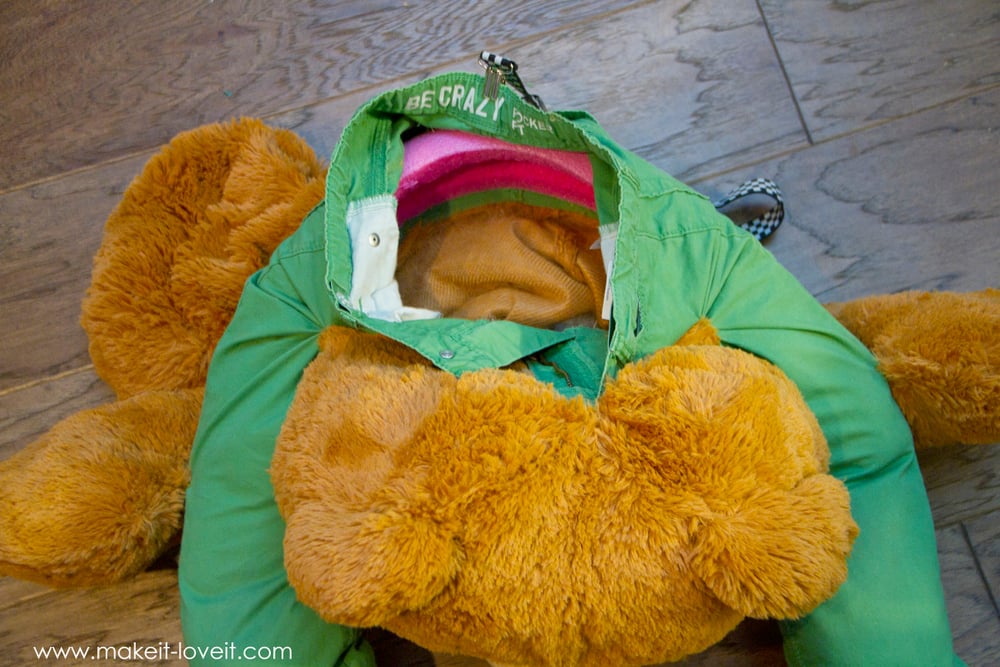 The flat side of the noodle sits flat against your subject’s lower back and the curved portion pushes out the bum of the pants and out into each leg, making it look like this bum is curved and smooshed sitting up on top of someone’s shoulders.  (Connor’s real bum is actually right below the green pants and part of the fur…..so without the noodle…..it just didn’t look right.  It was bugging me and I kept fiddling with it but then my husband suggested the pool noodle.  Brilliant!  It worked like a charm!) 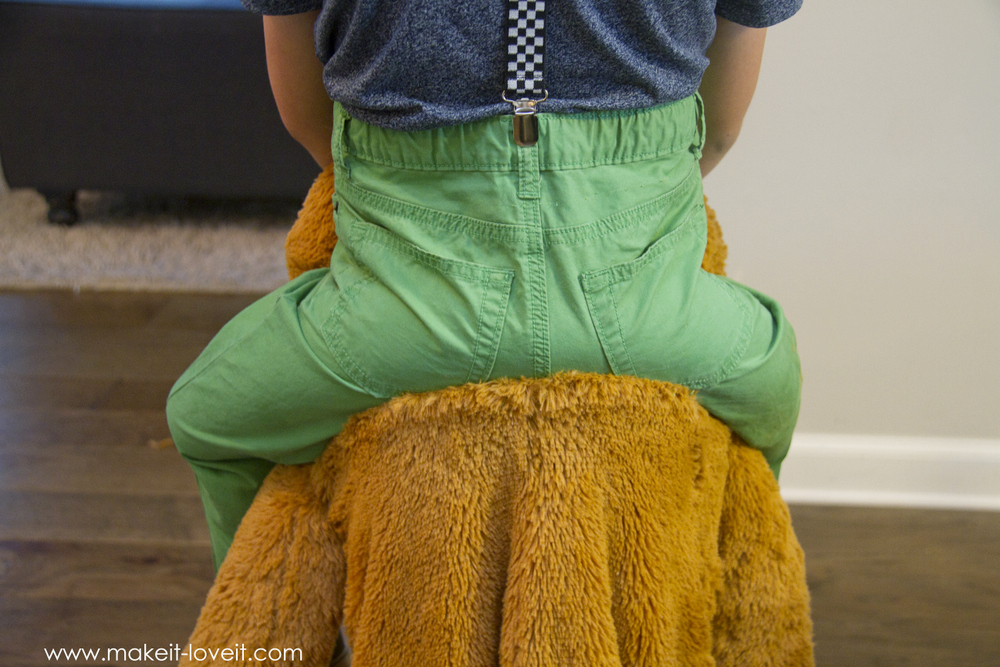 And do you see how the pool noodle extends out to where the “knee” would be and stops….and kind of gives it a “knee cap” look and bend to to the pants?  It works perfectly for that reason too!!! 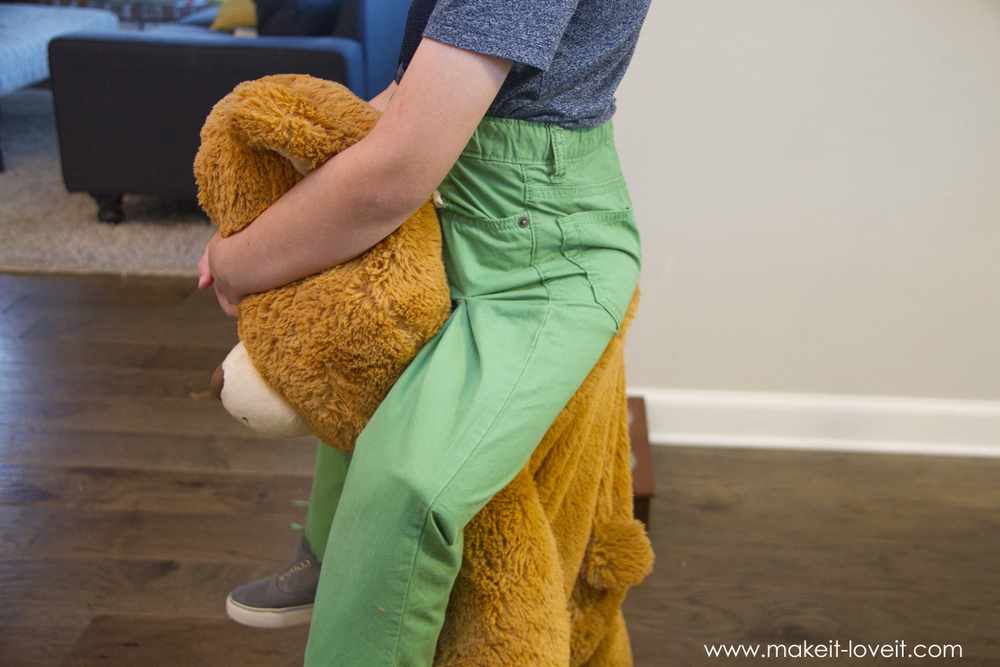 Now, stitch, each of the bear arms to the side of the “thigh” on the pants….to make it look like the bear is hanging onto the legs.  Also, I forgot to take a separate picture, but I also stitched the inner thigh of each pant leg to each cheek of the bear, to help hold the leg up and bent in place.  Worked like a charm! 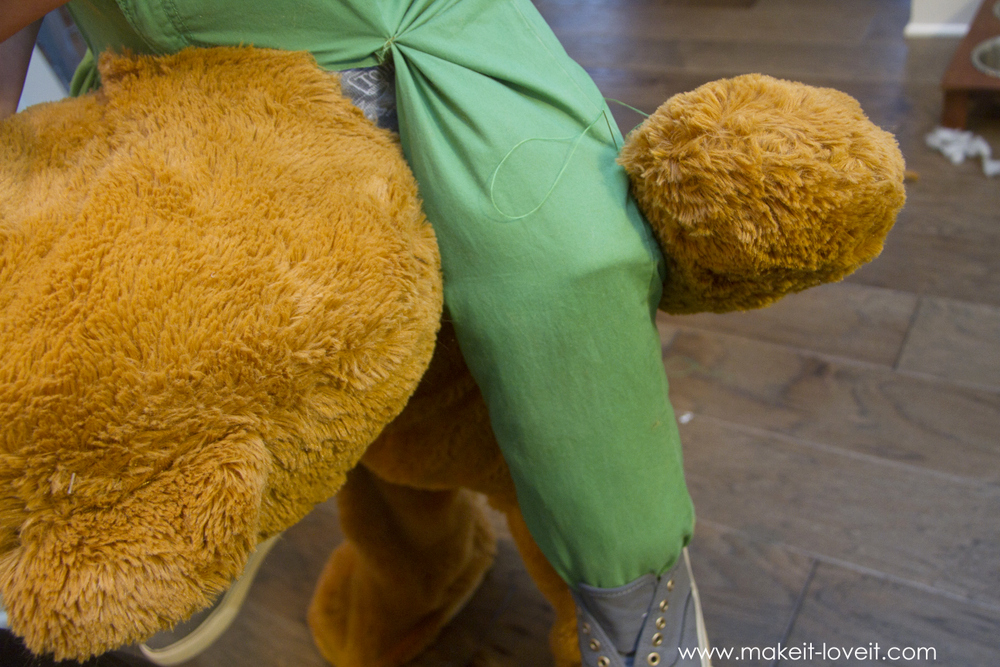 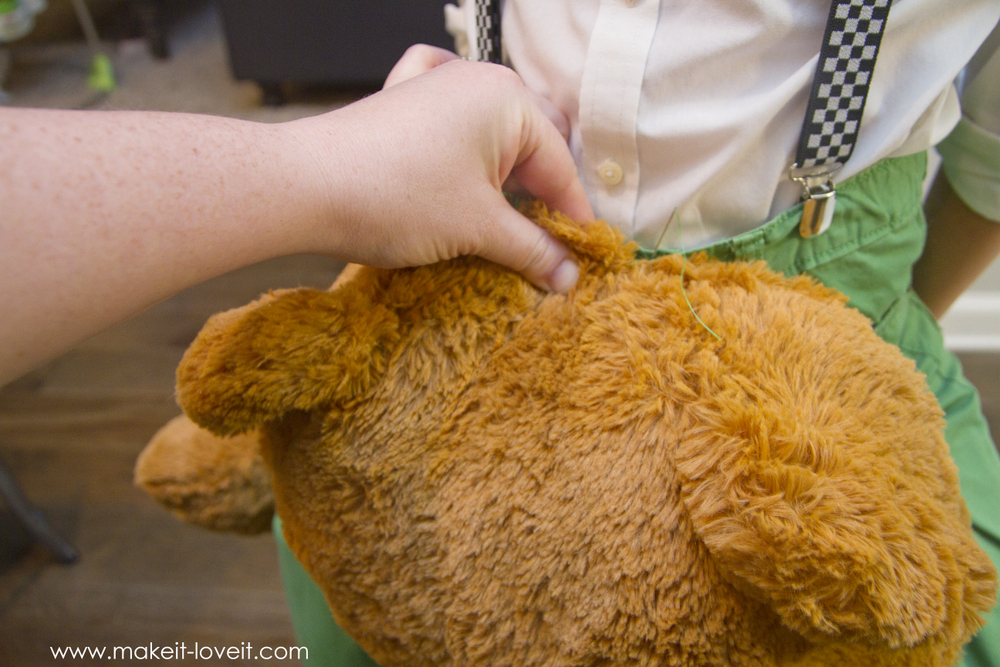 Then, at that same point on the head, I stitched the head to the front of the pants, to keep keep the head up and in place.  (Stitch it to the side of the pants that has the button hole.  Then you can still button the pants open and closed.) 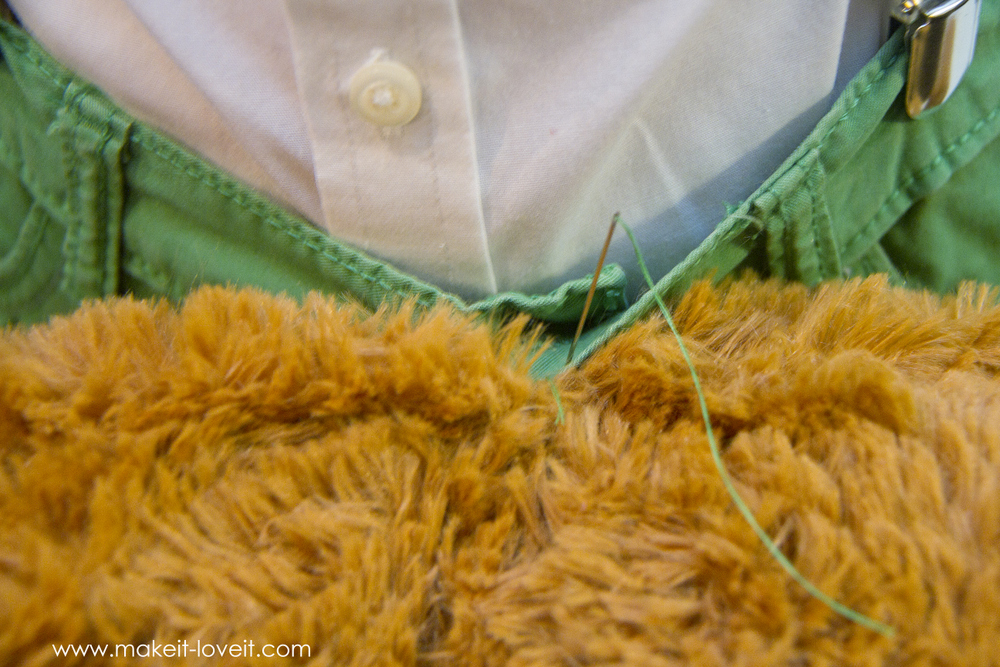 Now, while the costume is still on your subject, check for any openings or gaps where the pants are attached to the bear and either use some hand stitching or dabs of hot glue to seal it all closed.  Also, be sure you have used enough batting to fill out the legs into the shape you want.  (And to keep the stuffing from coming out of the head and arms, I covered the openings on the inside of the bear with pieces of fabric and just hot glued them around the edges o the opening.  You could also hand sew them in place….but hot glue is faster!)

Oh, and I made a quick bowtie (but didn’t take pictures) by hot gluing fabric into a square shape, cinching it in the middle, wrapping a strip of fabric around the center, and then gluing some elastic to the back.  That’s it!

Now, put your costume on with a white button up shirt and cinch up your suspenders to help hold the pants up.  Add some face paint, a red nose, and hat….and your Circus Clown and Bear Piggyback Costume is ready to go!

Oh, one more tip.  Connor has his tennis shoes on and they fit inside of the bear’s feet for the most part.  You can see a slightly better view of the bottom of his feet here….and how some of the fur tucks under his foot, but still works.

If your subject’s feet don’t fit inside…..you could always cut open the bottom of the bear’s feet and attach elastic strips to the bottom that slide over your subjects feet…..similar to the Wolf Costume HERE.

Anyway, hope that helps!  And let me know if you decide to make one of these for you or someone you know.  I would LOVE to see pictures!!!!