Happy Halloween!!!  I know it’s kind of late in the day…and some of you may already be putting on costumes to head out the door for Trick-or-Treating….but I just had to hop on real quick and share some group pictures of these DIY Circus Themed Costumes that I’ve been working on and sharing with you this month!

Wow!  5 costumes (for our 5 kids) was a LOT this year.  But none of these Circus costumes were super labor intensive (like some of the Halloween costumes from year’s past)…..so to make them was quickly gratifying. Whew!

Oh, and making each of these costumes was really fun….but oh gosh, seeing them together all in group—cracks me up!!! So I took a bunch of pictures to share, so you can have a little peek too!  Oh, and whenever we’ve done a family costume theme in the past, I’ve made a little video to share….and those videos have quickly become some of my kiddos’ favorite Halloween memories!  The past few years when we haven’t dressed in a theme, I didn’t bother making a video….and my kids have been sorely disappointed! So I told them I’d make a video this year (even though it takes me a loooooot of time) and they have been so excited to see it!

Well good news…..it’s done, and I’ll share that too!  (Which makes some of the costumes at least 100 times more funny! Haha!) 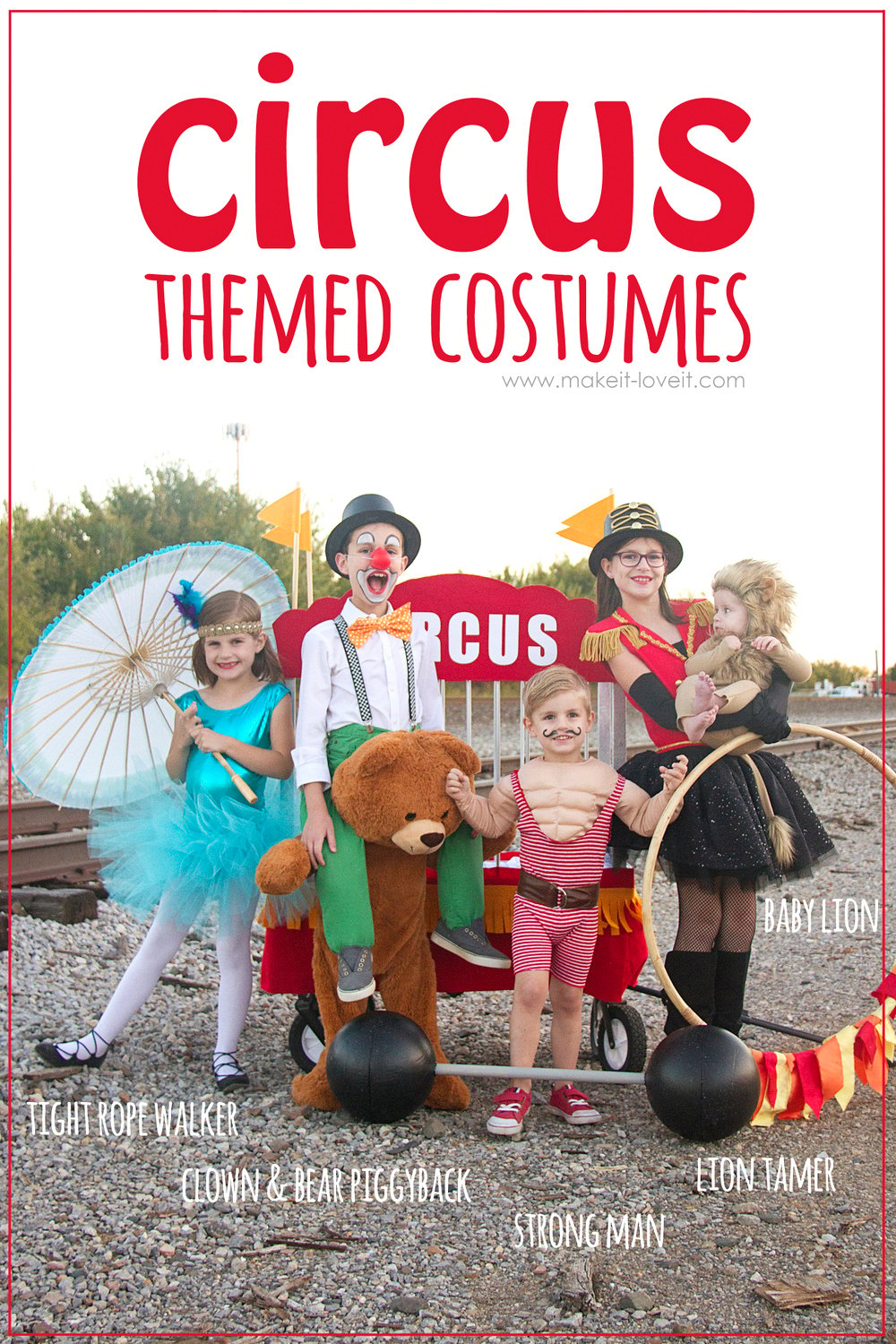 Haha….even though I’ve seen them all together in person, many times, it still makes me laugh seeing these pictures.  I have labeled some of our past costume themes as my “favorites”….but I’d have to say, this year is my new FAVORITE!!!!!

But before anything else, let me show you this video I made….and then you can scroll down to see even MORE pictures of this crew all together!  (I have a problem over-sharing….I know!  But I couldn’t fit everything in the video.)

***CLICK PLAY on the video above….and turn up sound!

Hahaha…..these kiddos are such good sports!  Their excitement for these circus costumes has been highly contagious…..so making them one by one was so much fun! 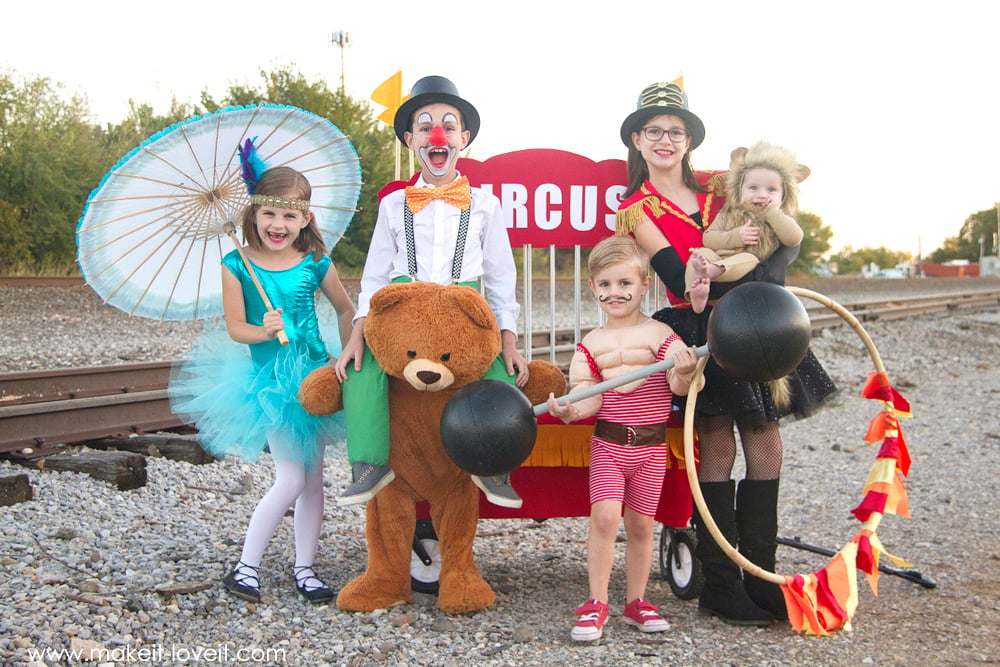 Ellie was excited from the very beginning to have a little lion to pull as part of her costume! 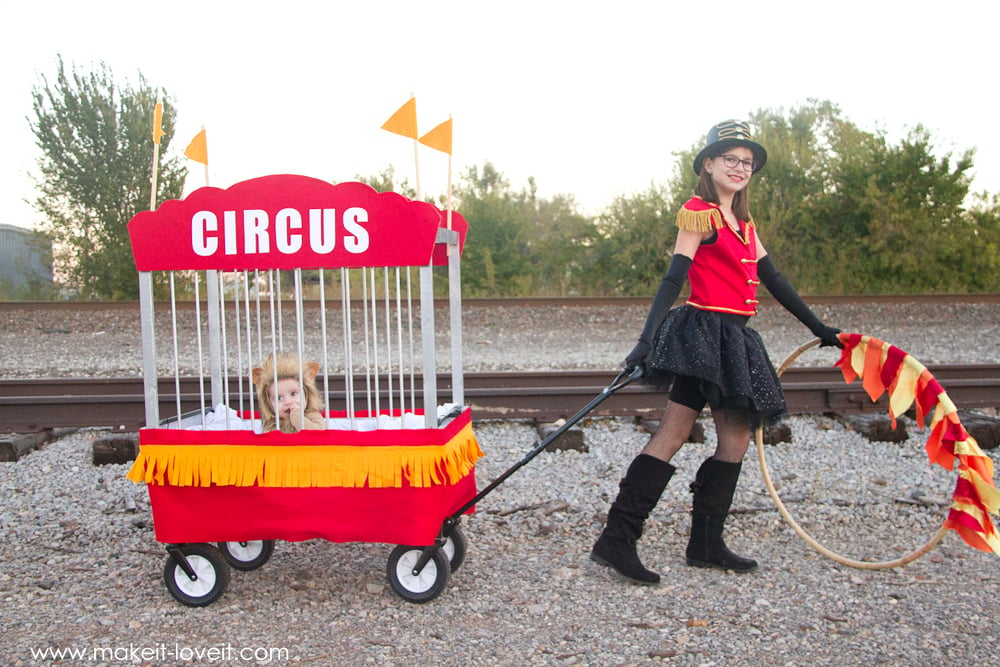 And good thing Max is still little enough to love being held by his trainer! 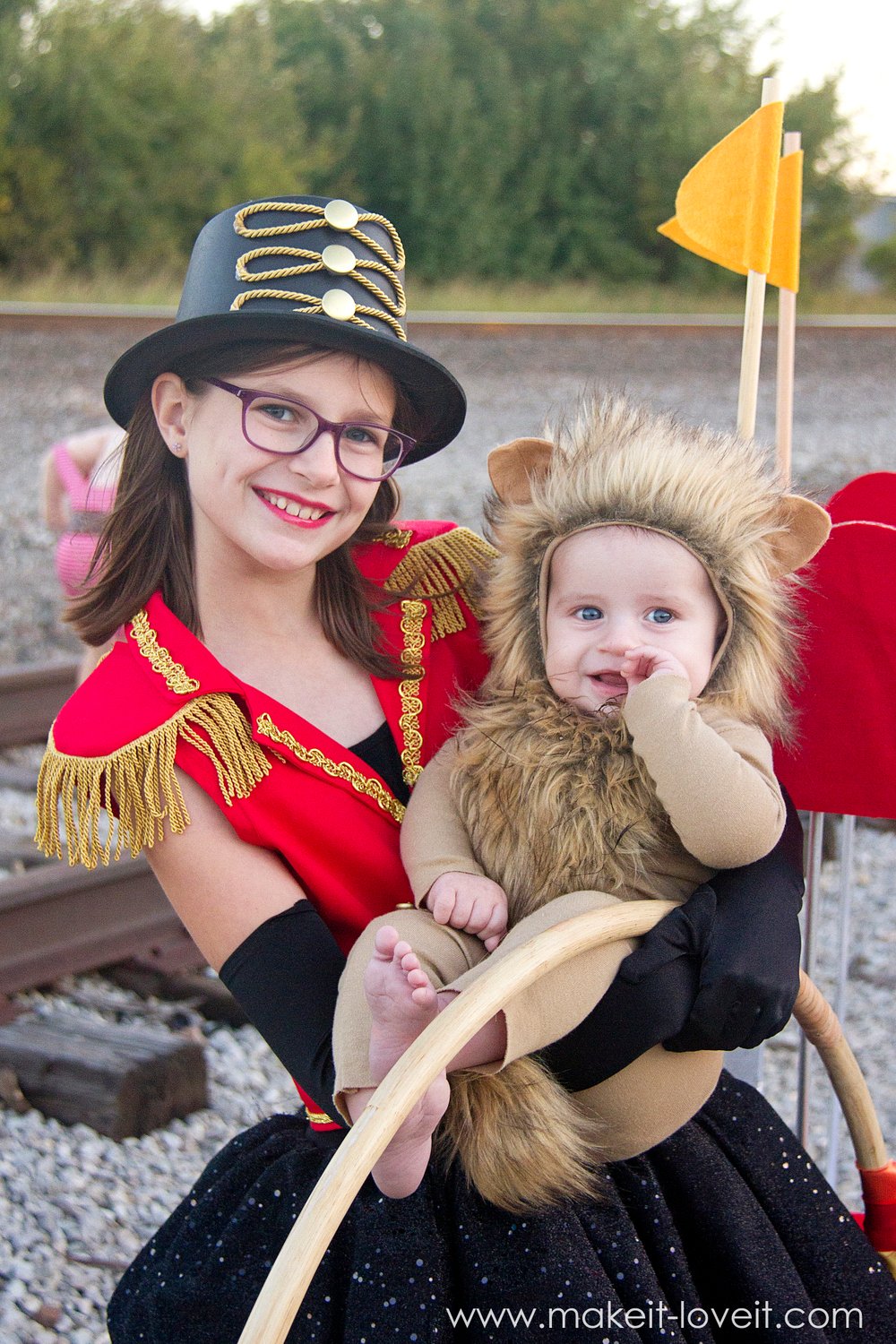 These 2 costumes crack me up the very most!  And Connor and Oliver both love the ham it up and make us all laugh! 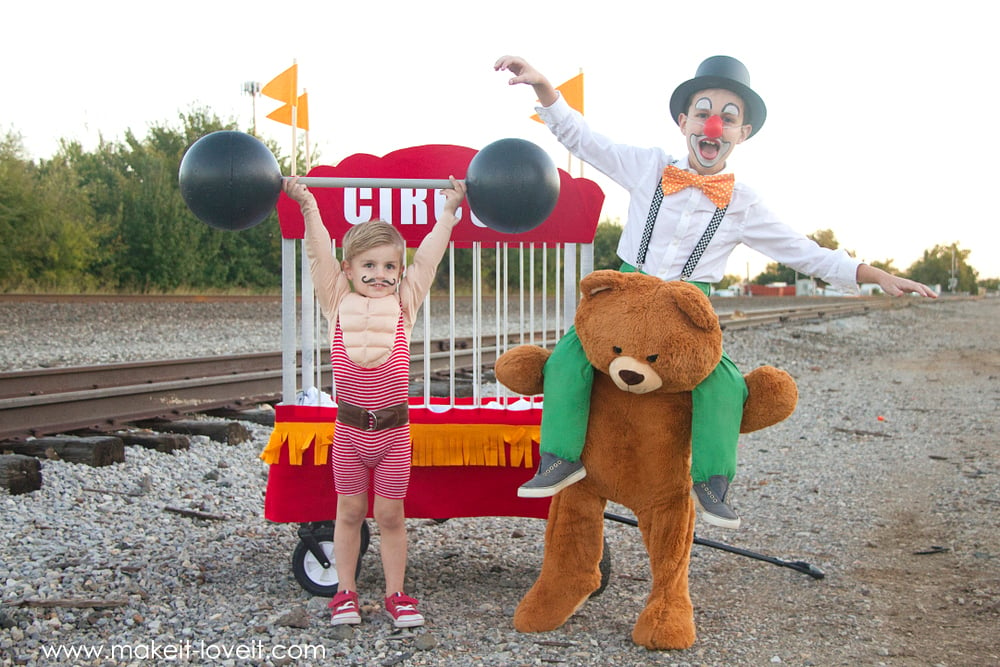 Ellie and Chloe are both quite “girly”…..so fluffy skirts were a must this year!  Now they have even more fluff to add to the dress up bin!  (Oh my gosh, you guys, I’m running out of room for these fluffy skirts though….aggggh!) 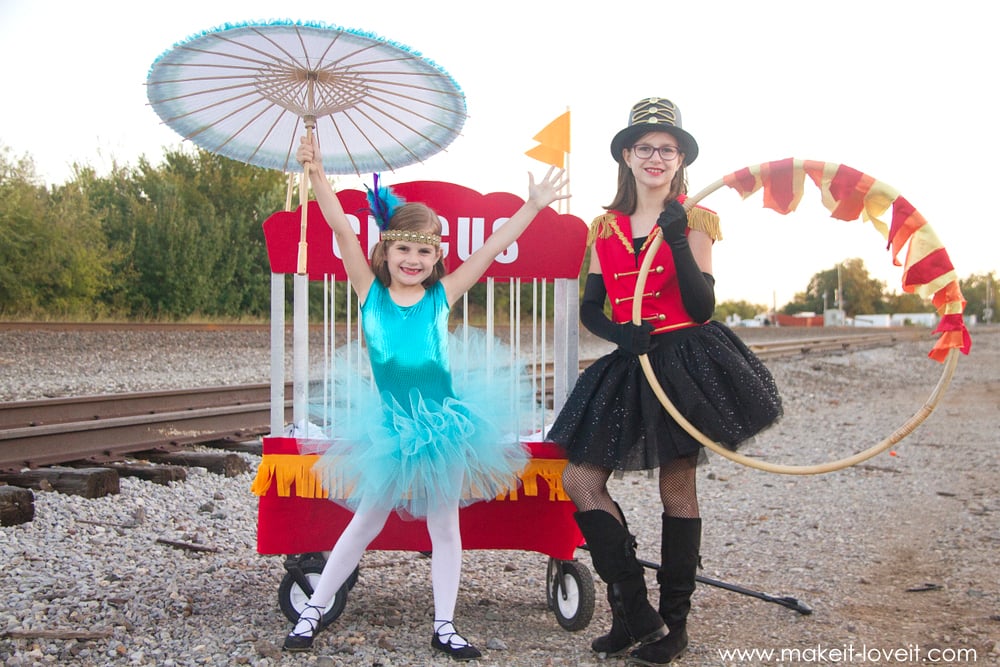 These costumes have been my very favorite project of the year! 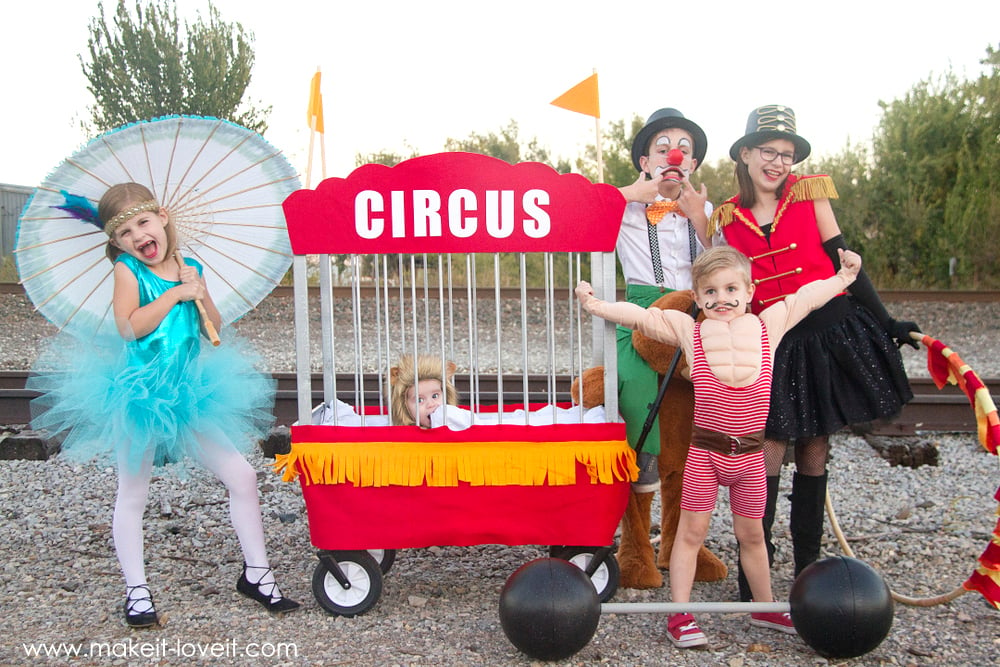 By the time I finish making the kids’ costumes each year, I have absolutely no desire to make anything too complicated for Steve and I.  So, we usually throw something together really quickly that may or may not go with the family theme (if there is a family theme).  And this year was no different.

But this might be the first year that we actually have a picture of all of us together in our costumes (thanks to a sweet friend for offering at the party!)…..because we always forget!!!  Yeah, I’m a mime (with way too much white makeup on)….and Steve is a popcorn vendor. 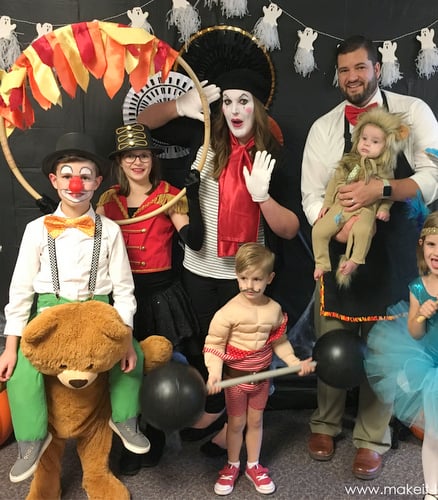 However, Steve forgot his popcorn tray at home.  Aggggh!  We didn’t forget any other costume details except for that darn tray (which is actually surprising) …but he was kinda bummed, since he spent some time making it!  He already took his apron and bowtie off but I had to at least take one quick photo of that tray he worked on! :) 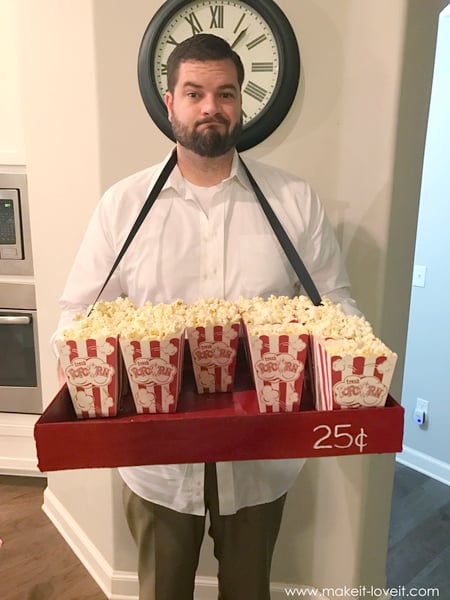 Okay friends…..that’s a wrap!  Another year of costumes complete! 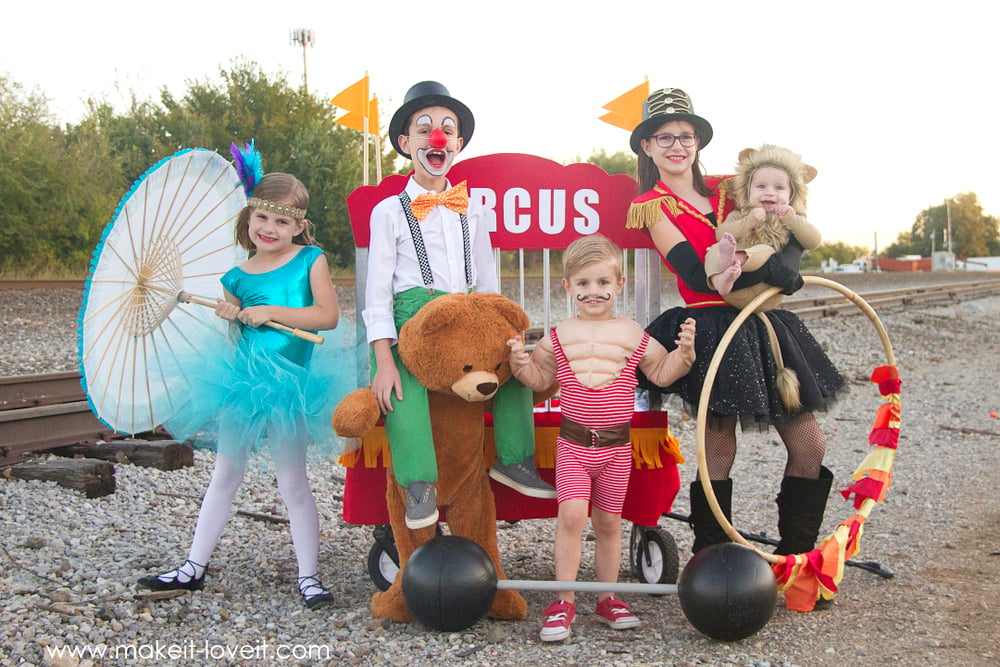 And now I may hibernate for a few days (which really means I need to clean up my house….especially the tornado that hit my craft room)!

Talk with you soon!

Ashley Johnston is a professional DIY costume maker, sewist, crafter, and owner of Make It & Love It. She is a mom of 5 and a wife to a very patient (with my craft clutter) husband. In case you’re wondering, she always chooses crafting/sewing/designing over mopping/dusting/wiping base boards……but bathrooms/laundry/full bellies are always attended to. Whew!
Author Bio Box by HOI
Author:
Ashley Johnston
Categories:
Mentions:
Not Specified
Keywords:
circus
Last Updated:
January 12, 2021 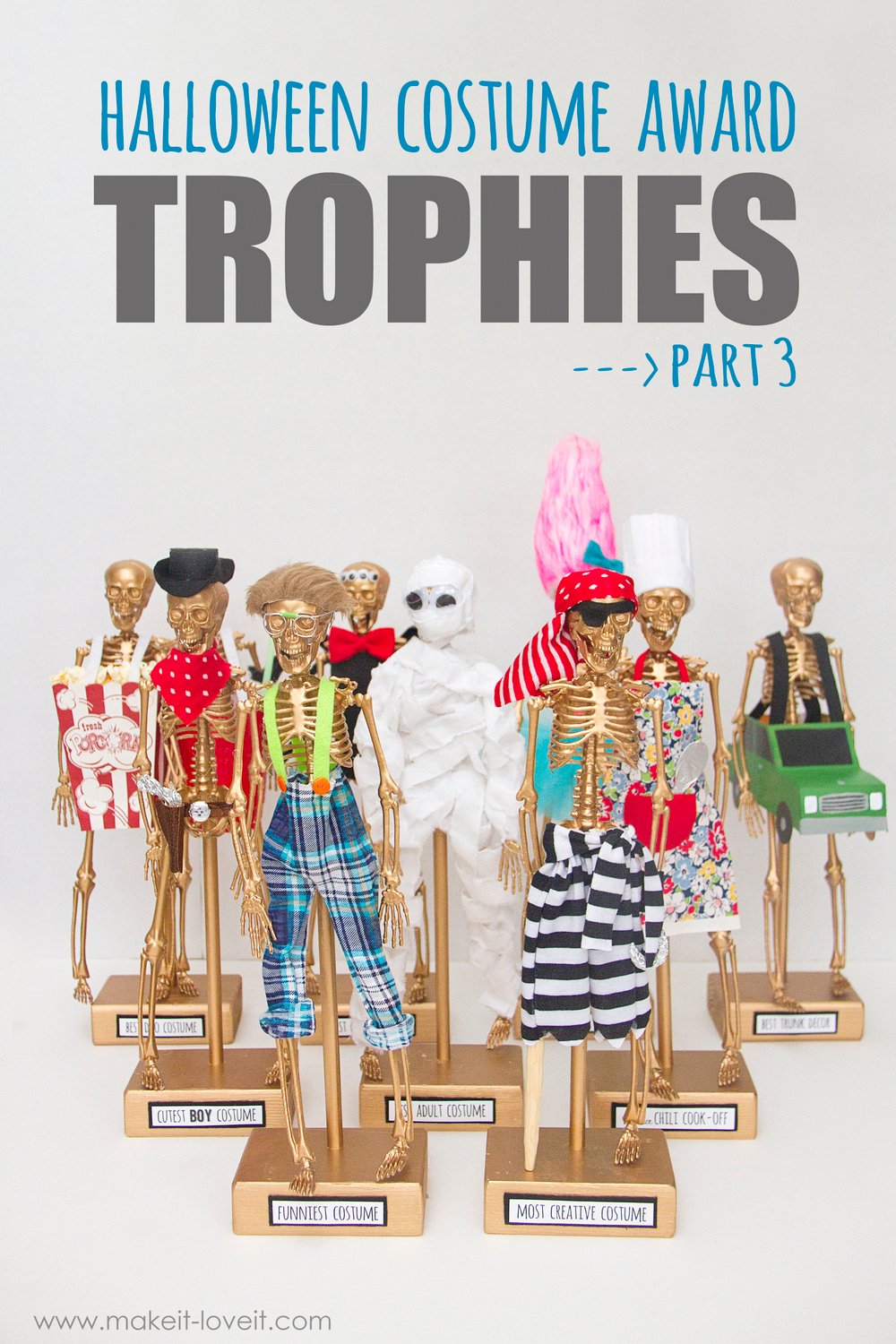 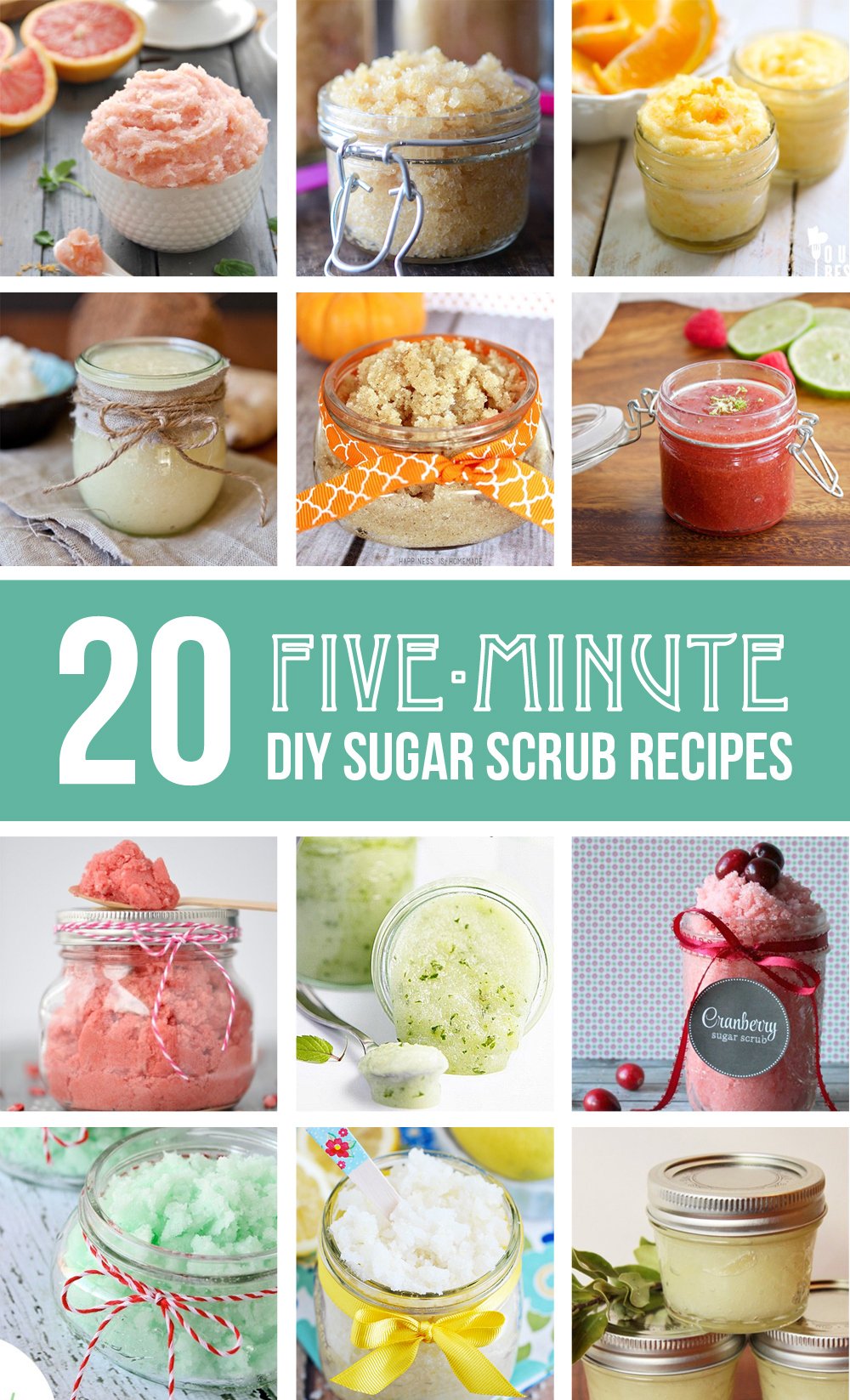 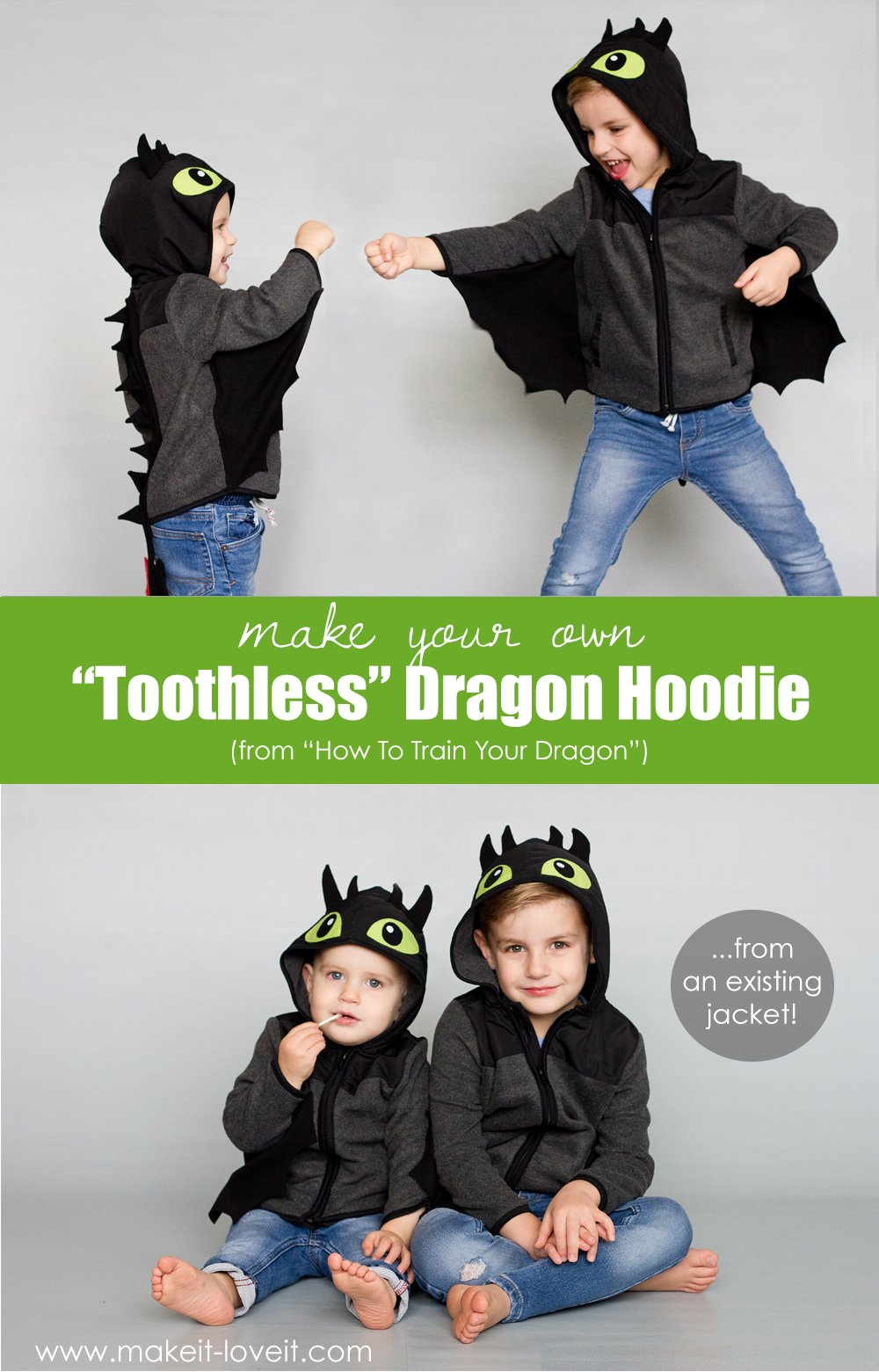 Make a “TOOTHLESS” Dragon Hoodie (…from an existing jacket!) 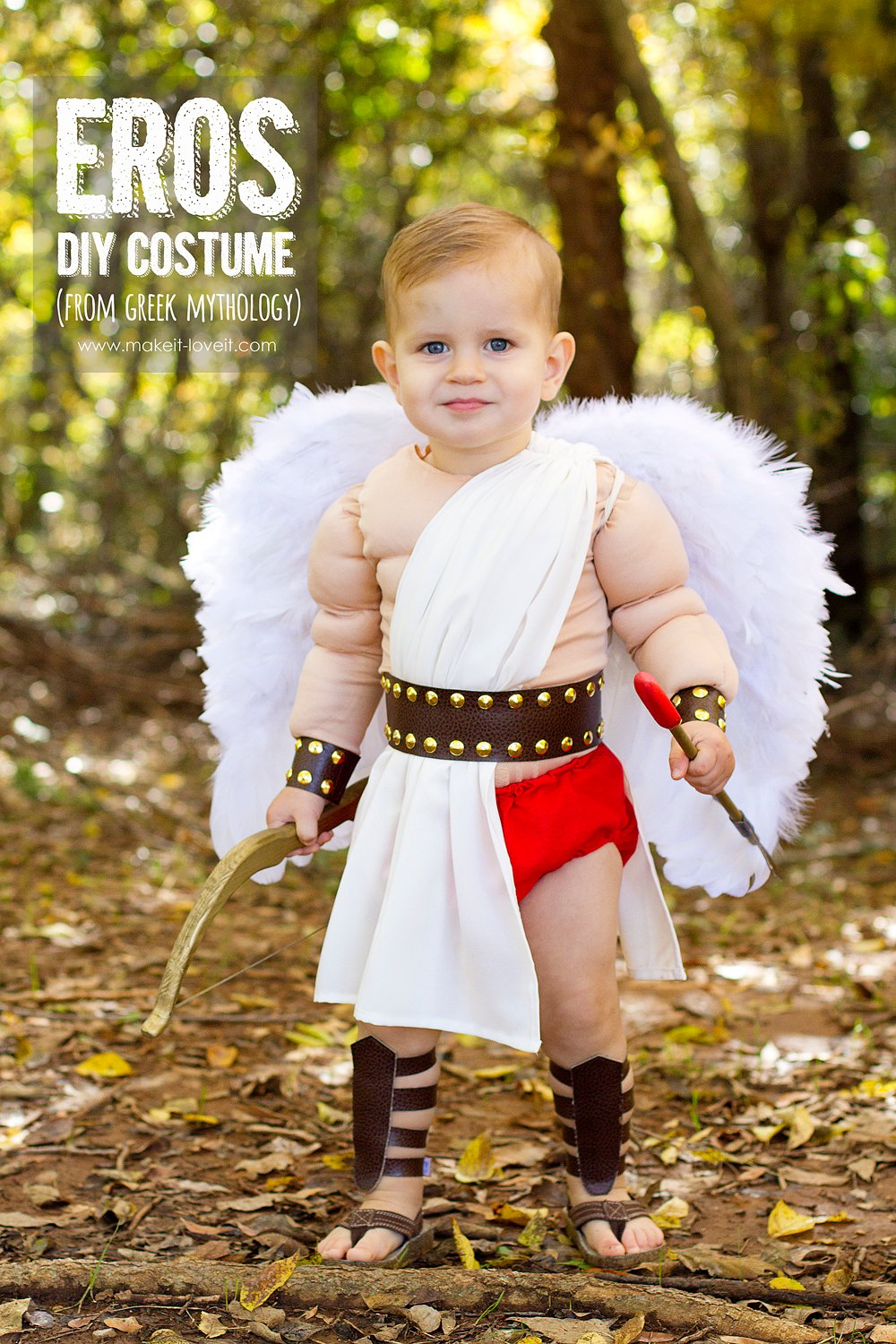