I grew up in Arizona from birth until I left for college. So, while in the public school system all those years, I learned all about Arizona history and how it became a state, who its first settlers were, the excitement of mining gold and silver, etc.  And because I only lived in Arizona, I didn’t really learn much about the other states in our country (at least, not at school).  My oldest, Elli, is in 3rd grade this year and that’s when they really start diving into state history here, so it has been fun to learn along with her, all about the state where we’re currently living — Oklahoma!

Last month, they chose a famous person from Oklahoma and researched their childhood, their major life events, etc…..and created a visual presentation all about their person of study.  (She researched Shannon Miller, the Olympic gymnast, and now of course wants to take gymnastics. Go figure!)  And then this month, they’ve been studying the Oklahoma Land Run of 1889, where an estimated 50,000 people raced to claim their piece of the available 2 million acres of land.  The land was considered some of the best unoccupied land in the U.S., so claiming your own chunk of it, was a huge deal back then.  Those who raced to lay claim over their land were called “Boomers” and those who tried sneaking ahead of time to try and sneak a claim before everyone else, were known as “Sooners”….which is also the mascot of one of the major schools here, University of Oklahoma.  (I have also learned since moving here that you are either an OU fan or an OSU fan…..there’s no middle!  I always confuse the two and call them the red school [which is OU] and the orange school [which is OSU]……which probably makes the locals around here cringe.  But if I had to pick, it would be the “red school” because they always seem to have a much cuter line of fan clothing at the stores! Haha! ;))

Anyway, to finish off this unit of study, the entire 3rd grade at Elli’s school re-enacted the Oklahoma Land Run of 1889.  All of the kids were each placed into “families” and were responsible for assigning roles (ma, pa, brother, sister, dog, etc.), bringing a wagon, and had to come up with props and costumes for the Land Run.  No one was required to actually dress up but I think in 3rd grade, most kids still thought it was a fun idea. We knew about this for weeks but of course, didn’t actually do anything about it until the night before it took place.  ACKK!!!  So, I dug through what fabric I already had, and put together the quickest little Prairie Girl Costume (that would also work well as a Pioneer Costume if you need it)…..and she was ready for her elementary school “Land Run of 2016”! :) 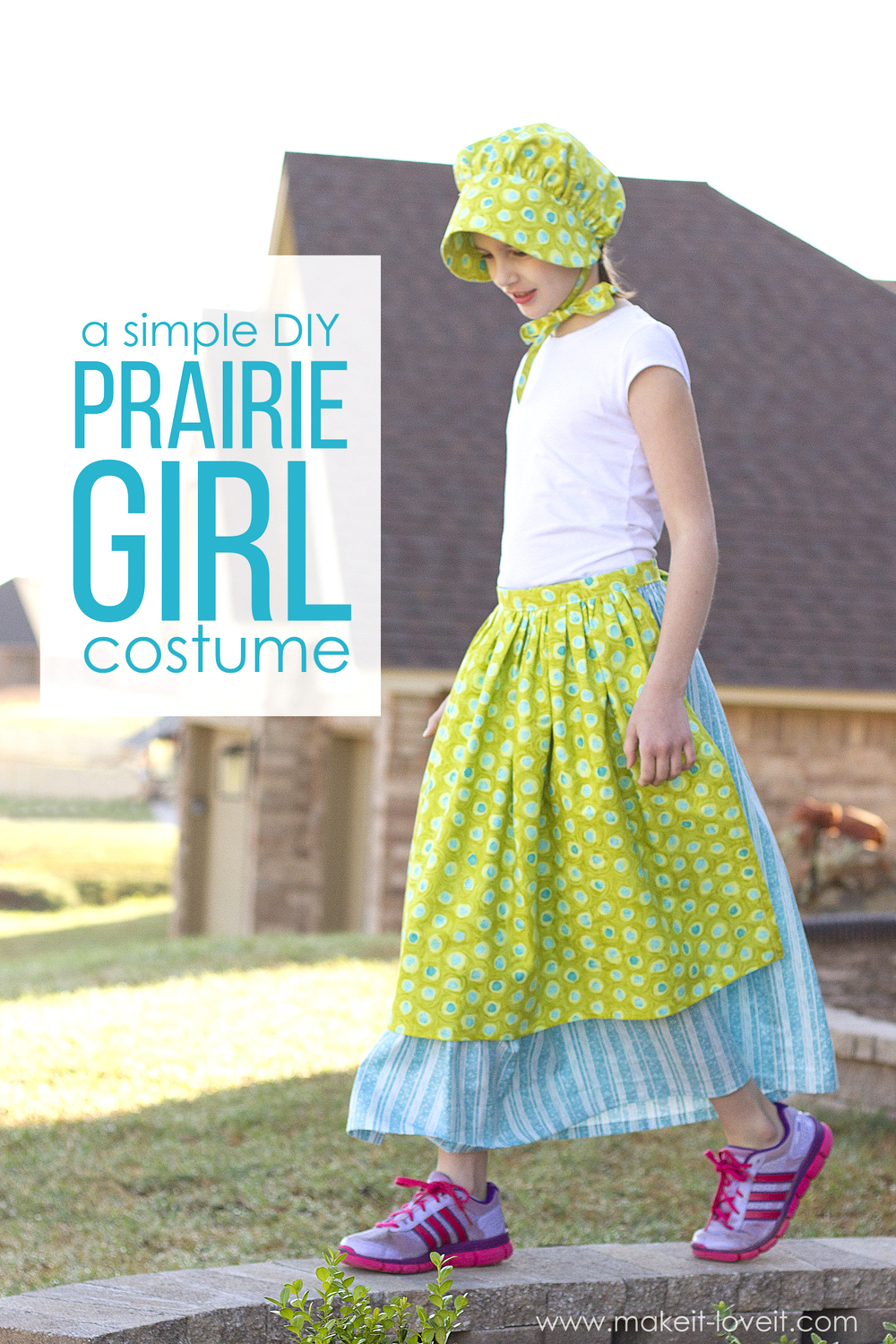 We haven’t needed a Prairie Girl costume until now…..but I can imagine this costume will get used plenty between Elli and Chloe, because there will probably be other times it is needed for a book report, a skit, a Pioneer reenactment, etc.

Especially this hat…..which my girls have been wearing non-stop around the house!  I think I need to whip up another though, because they like to pretend they are Laura from Little House on the Prairie and are gathering wild berries or firewood. :) 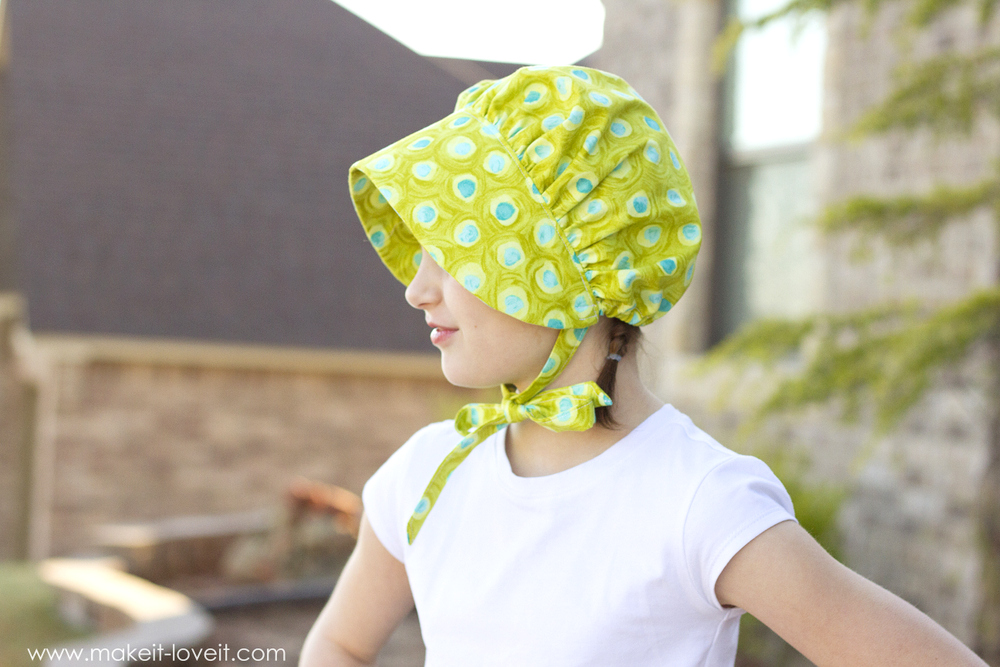 This was the fastest little costume though…..and took maybe 90 minutes to make. (Possibly 2-3 hours if you’re a little slower on the machine.)  But all this costume is, is a very basic elastic waist band skirt, a half apron, and then a very simple bonnet. 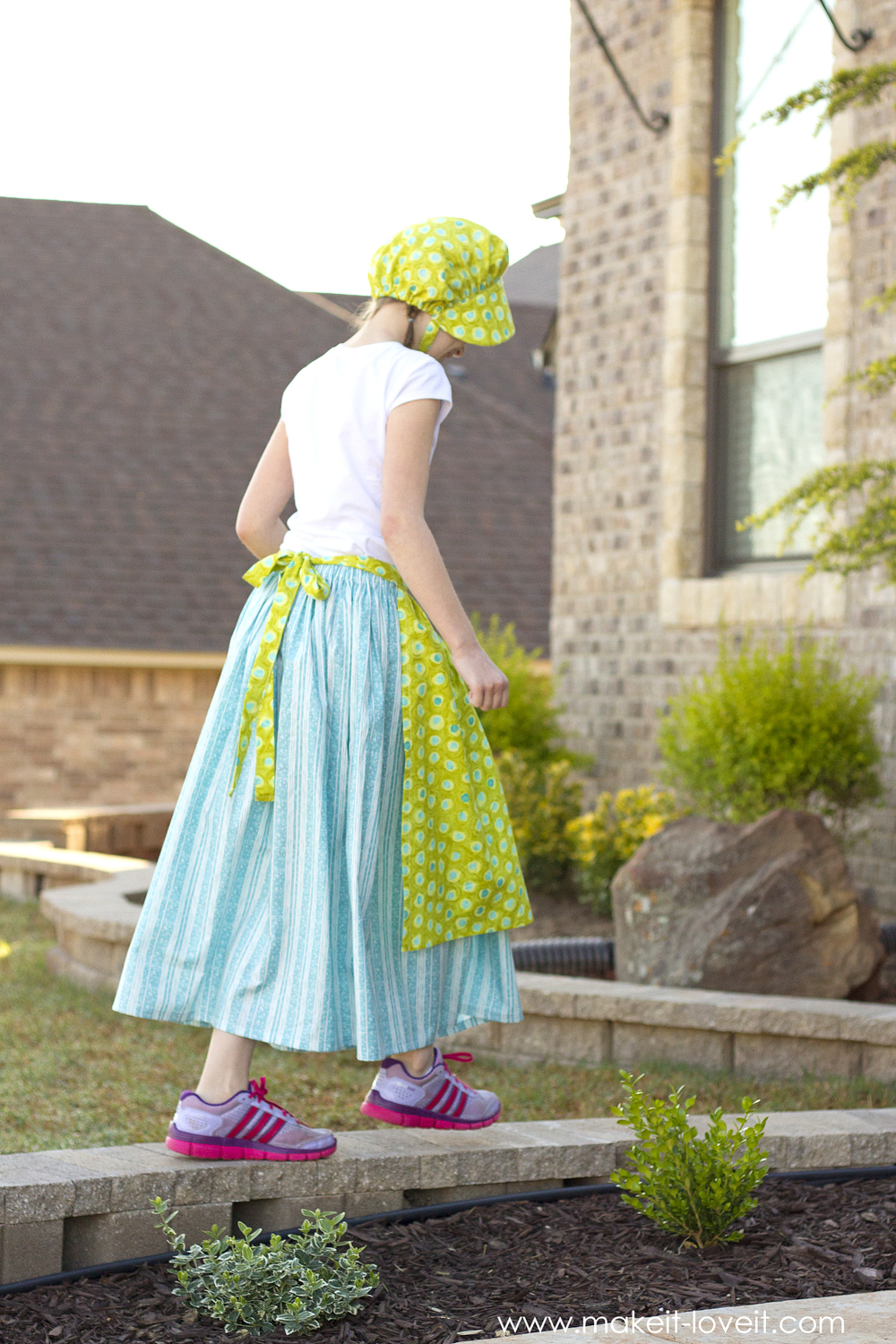 Now, just add a T-shirt, and you’ve got a simple little outfit that’s perfect for traveling the prairies and discovering new things! 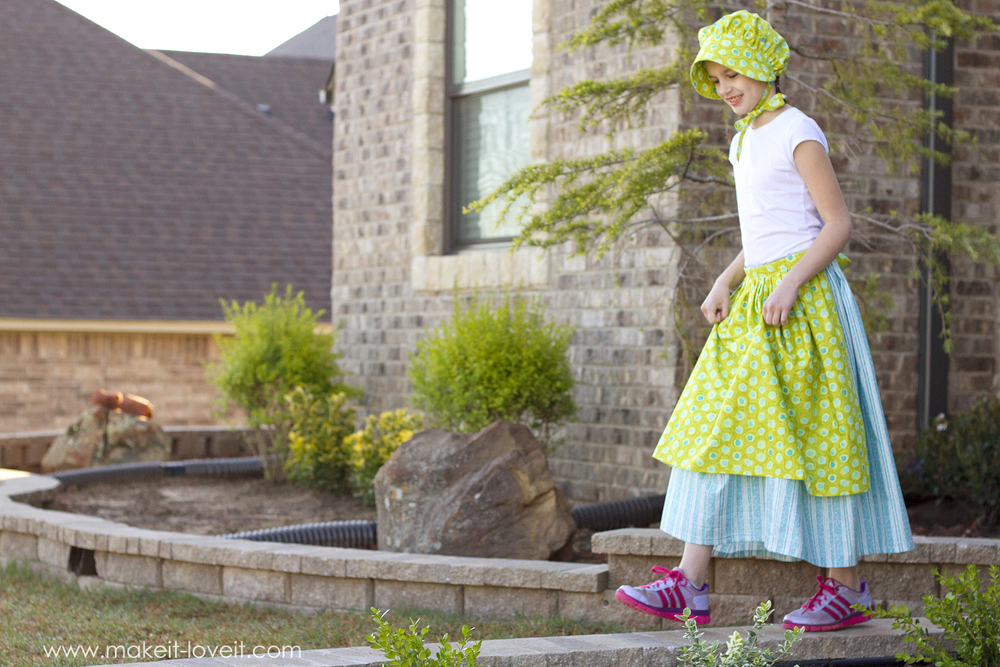 ***please excuse the unfinished landscaping in the background…..we’ve been working hard, but still aren’t quite done with that!

When the bonnet is not needed, it can be pushed back and simply worn around the neck.  Or taken off all together……but believe it or not, that bonnet was so much faster to make than you might think! :) 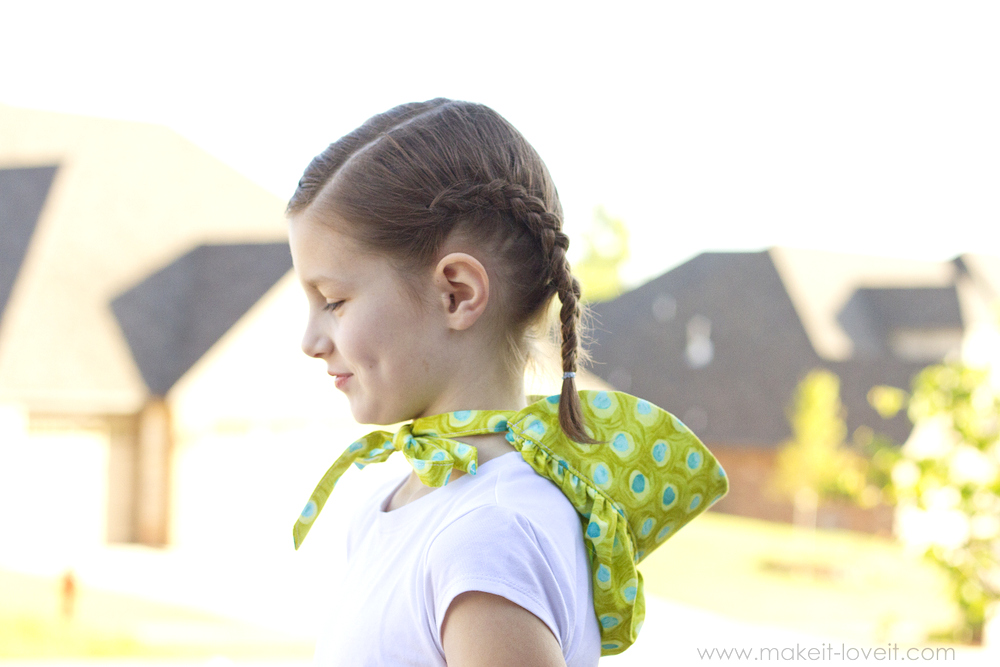 And I know those pink and purple shoes aren’t quite the right period……but little leather boots would have hindered the whole “Land Run” experience, so we’re just going with it!  Also, you could make the skirt a little longer but Elli knew she was going to be running as fast as she could…..so she specifically asked that the skirt be long (because she likes long dresses/skirts lately), but short enough that she didn’t have to hold it up while running.  Once it was finished, she said it was perfect! Whew! ;) 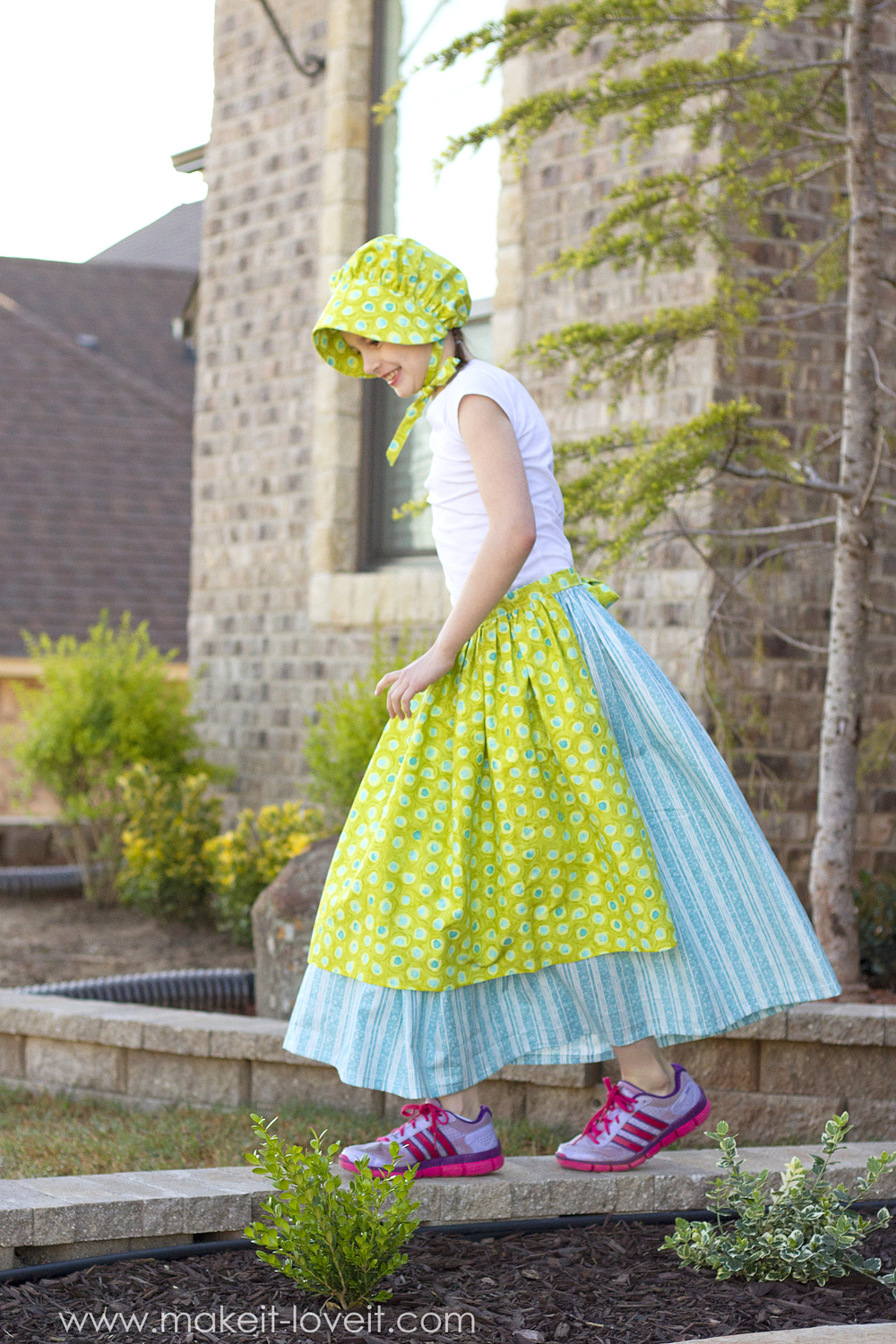 Man, this girl is becoming such a sweet little lady!  (And ooops, she forgot her glasses….and I didn’t realize it, until I uploaded these pictures.)  I’m just glad she still asks me to sew things for her, because I know these days will end all too soon.

So, when she reminds me we need to come up with a costume for the next day??……..YOU BET, sweet girl, let’s throw something together!!! 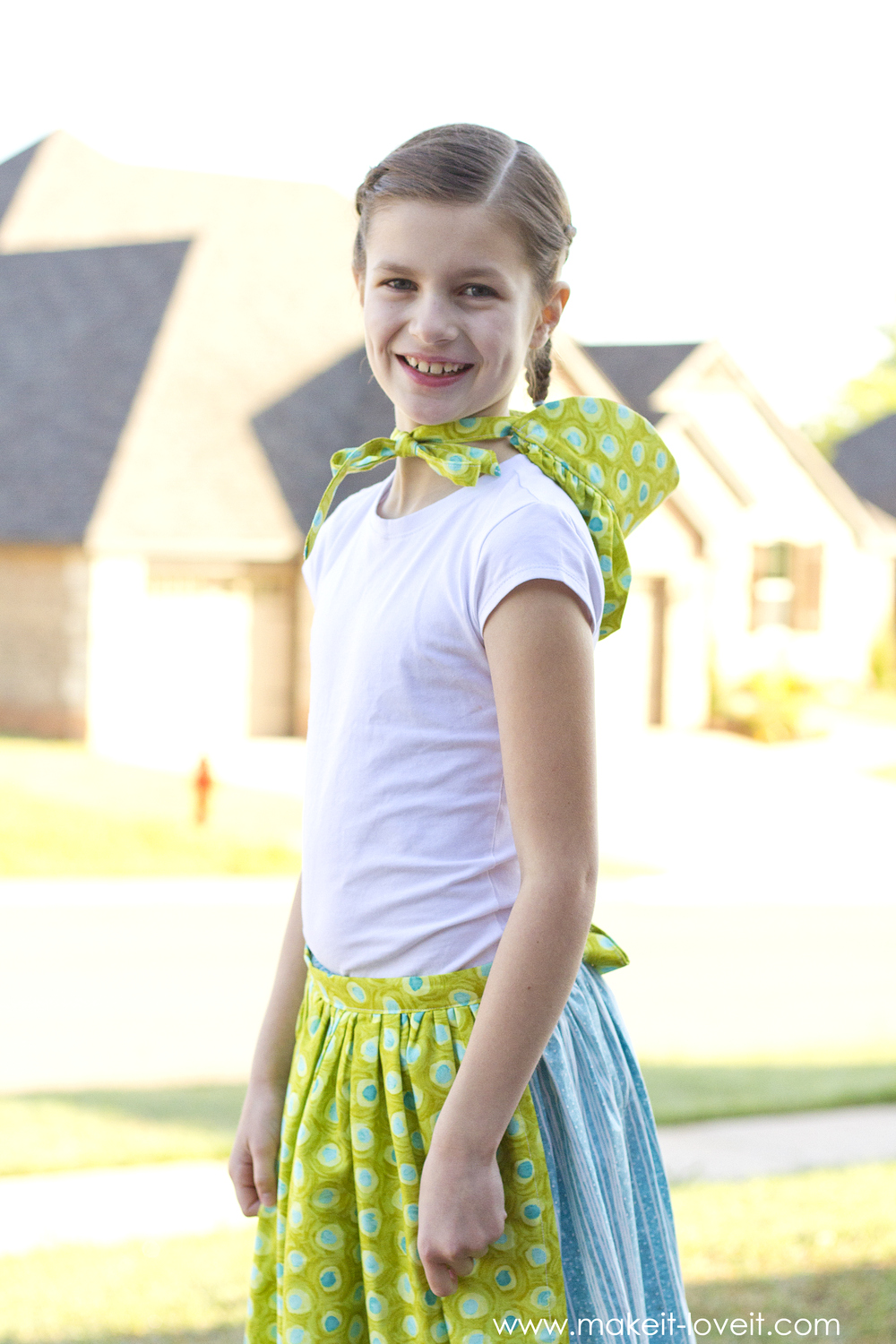 And I debated whether I not I would share pictures of the actual Land Run, but decided it was such a fun event, I just had to!  (So, no snoring…..this isn’t boring history class!)  And when other kids’ faces weren’t already blurred out from the camera, I faded out their faces in photoshop.

But to kick off the event, they had all of the 3rd grade parade through the halls of the school, while the other grades (and parents) cheered them on!  And I’m telling you…..the vibe at this point, was EXCITEMENT! 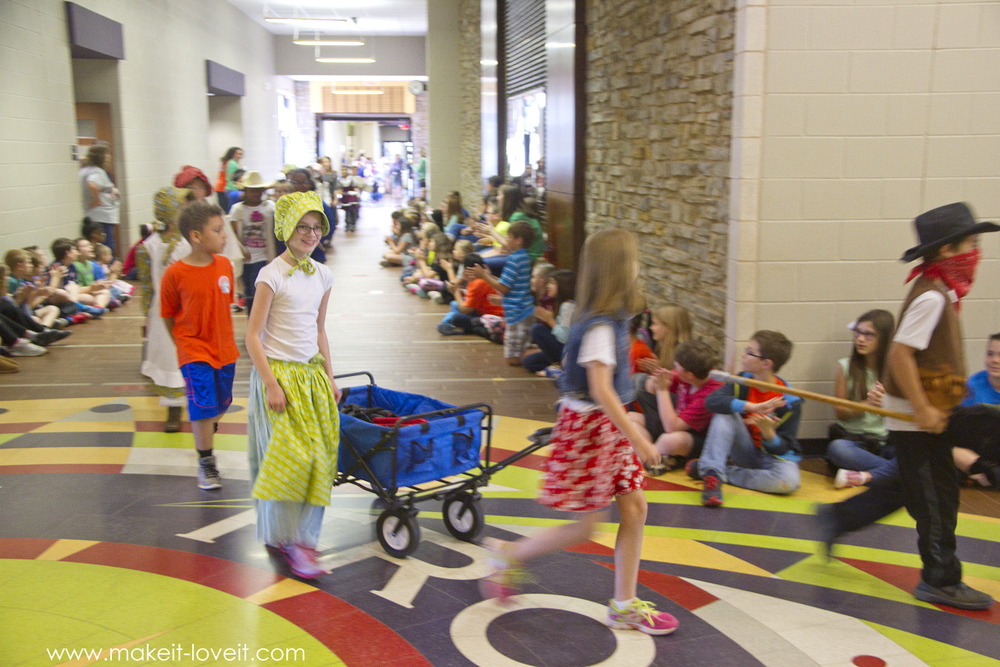 Then all of the classes lined up on one end of the school field, waiting until the official blow of the whistle to begin their race for land.  All of the kids lined up with their “families”, anxiously awaiting their time to claim their land. 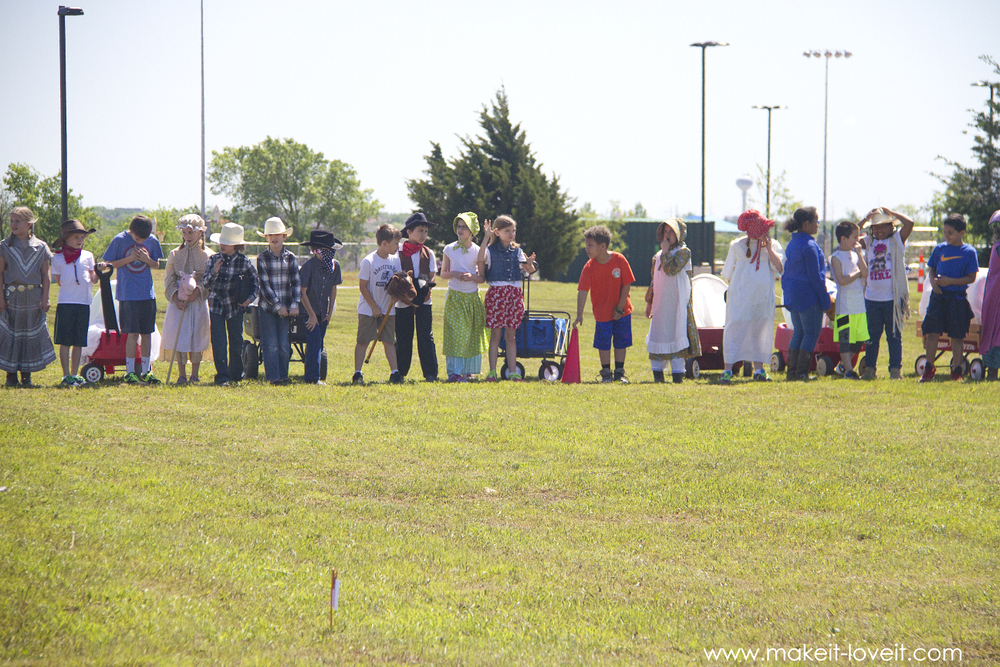 There were numbered “flags” on each of the spots of land but there were more “families” than there were spots of land, so the kids all knew that they truly had to race to claim their territory.  (And whatever “family” didn’t claim a piece of land, they were instructed to find a family who would share their territory with them, which mirrors what actually happened historically.) 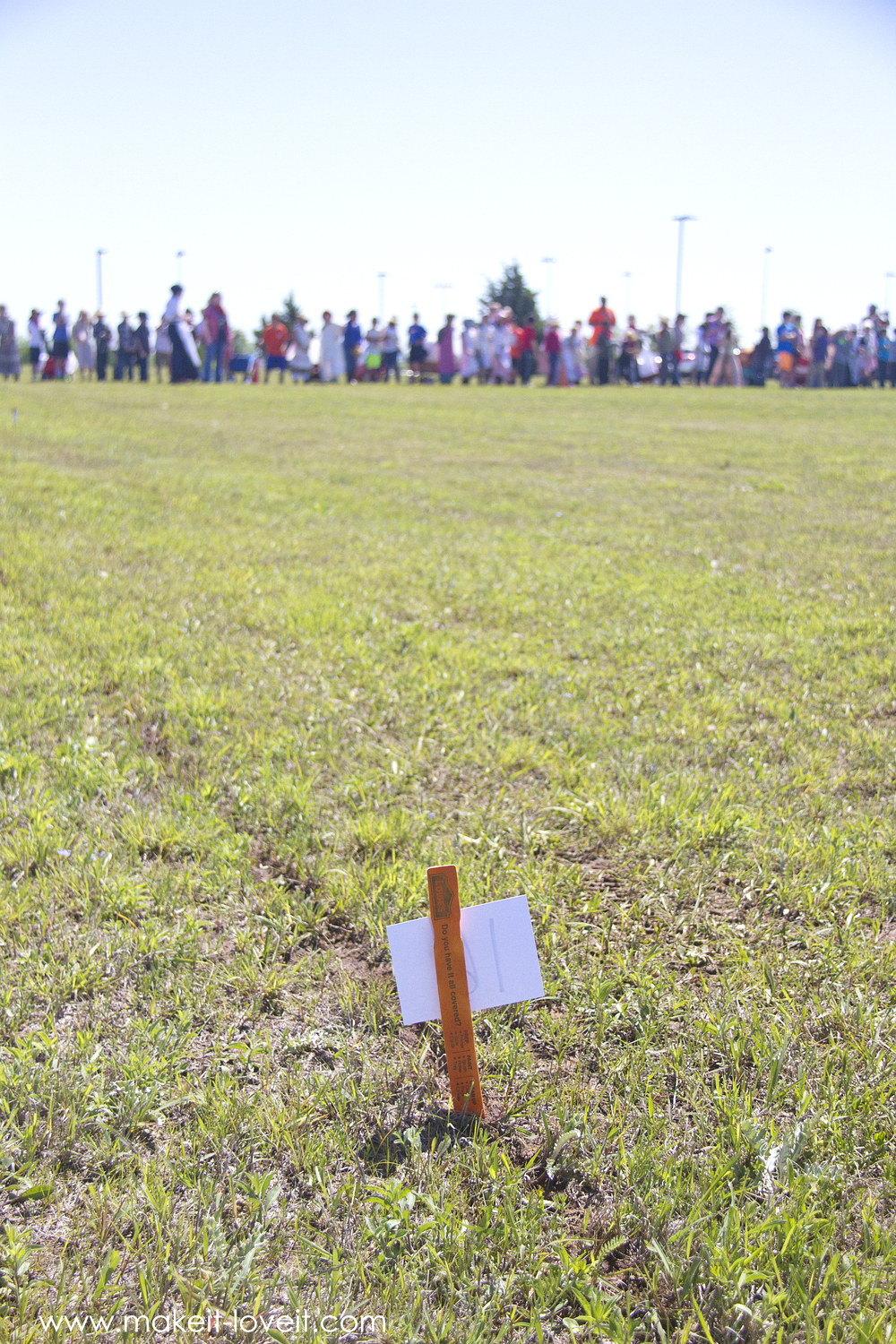 There was even a “Land Office” table, so that they could officially register their land once it was claimed. 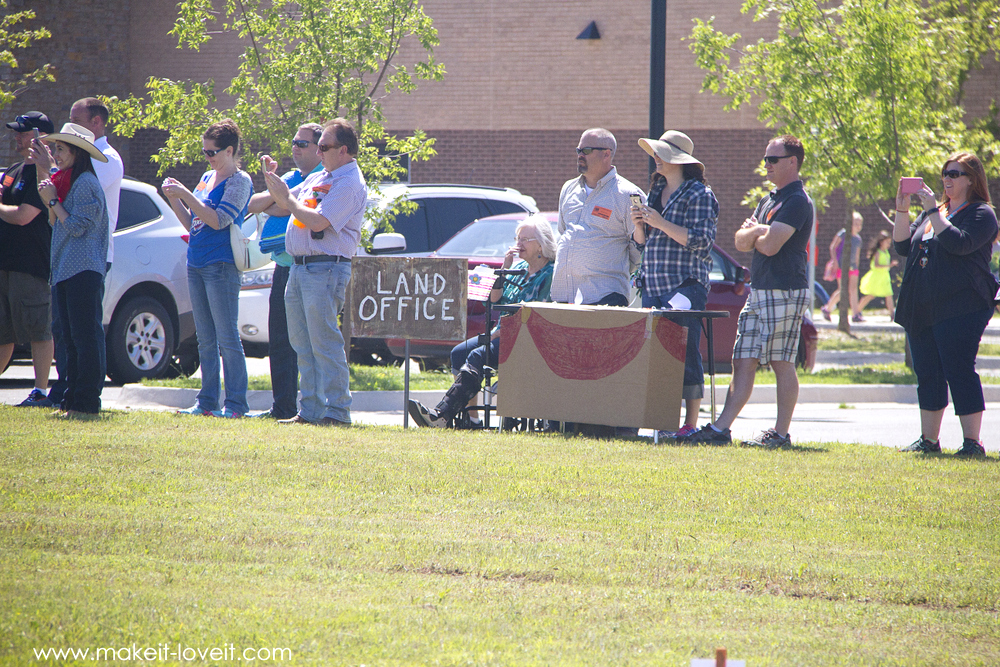 Once the whistle blew, the kids went crazy.  They stampeded the field and went this way and that way….trying to claim their land! 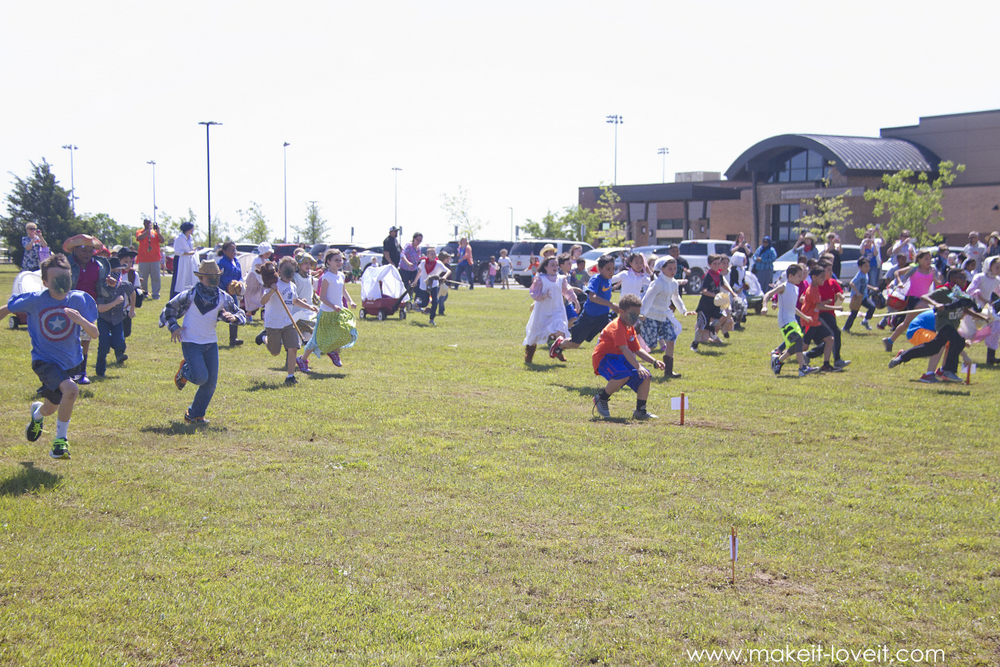 At one point, Elli saw a flag at the very opposite side of the field….and started heading towards it. 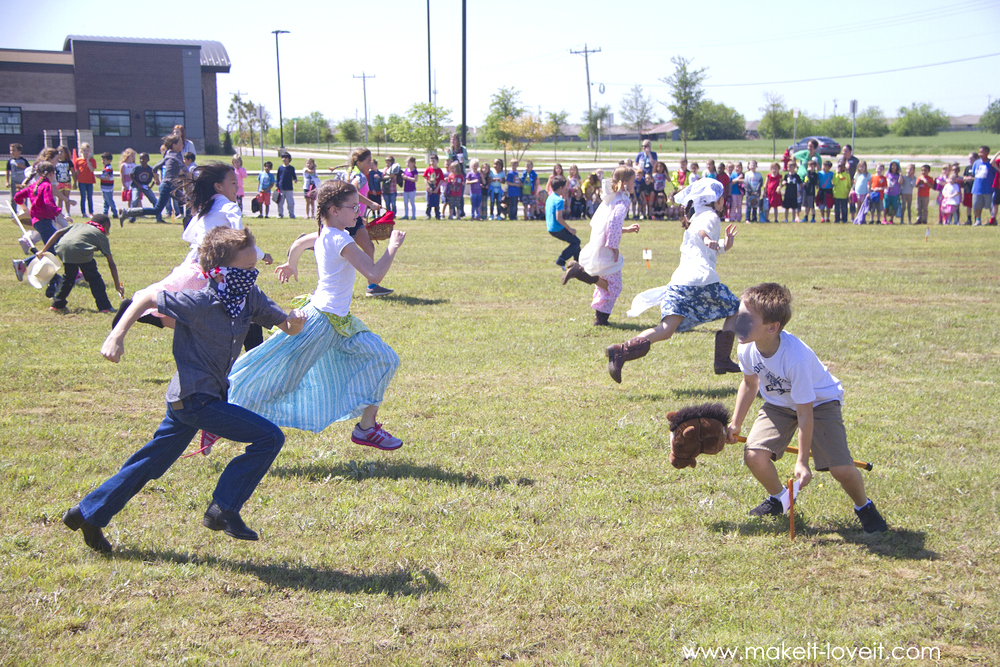 But so did another little bandanna-wearing cowboy…..so they both sprinted towards the same flag. 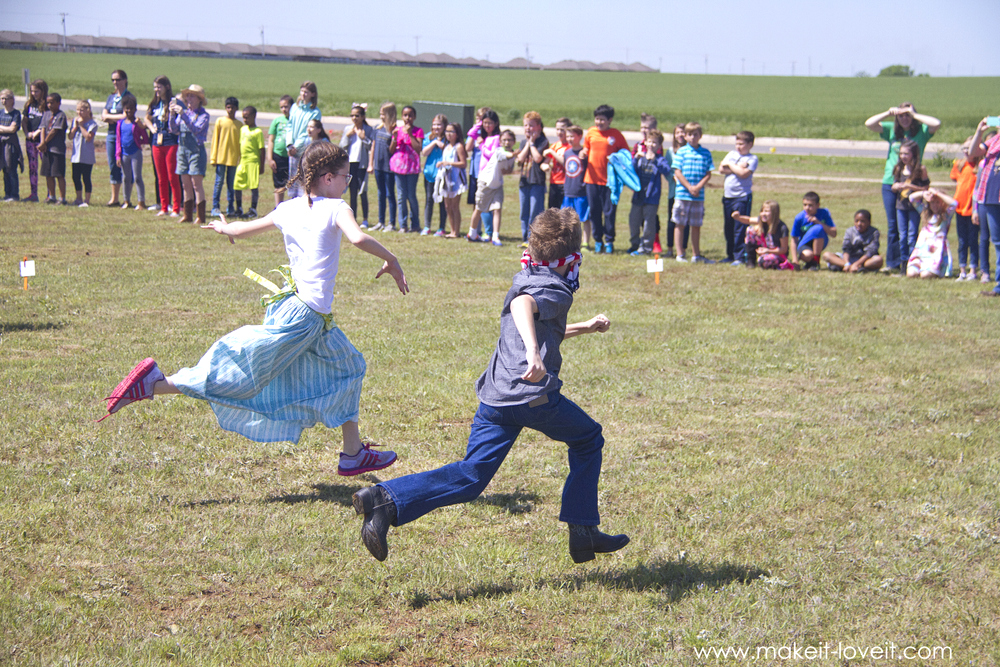 And unfortunately, he grabbed harder than she did because she said they both had their hands on it about the same time.  Awwww, darn.  I need to teach her how to throw a few elbows! ;) 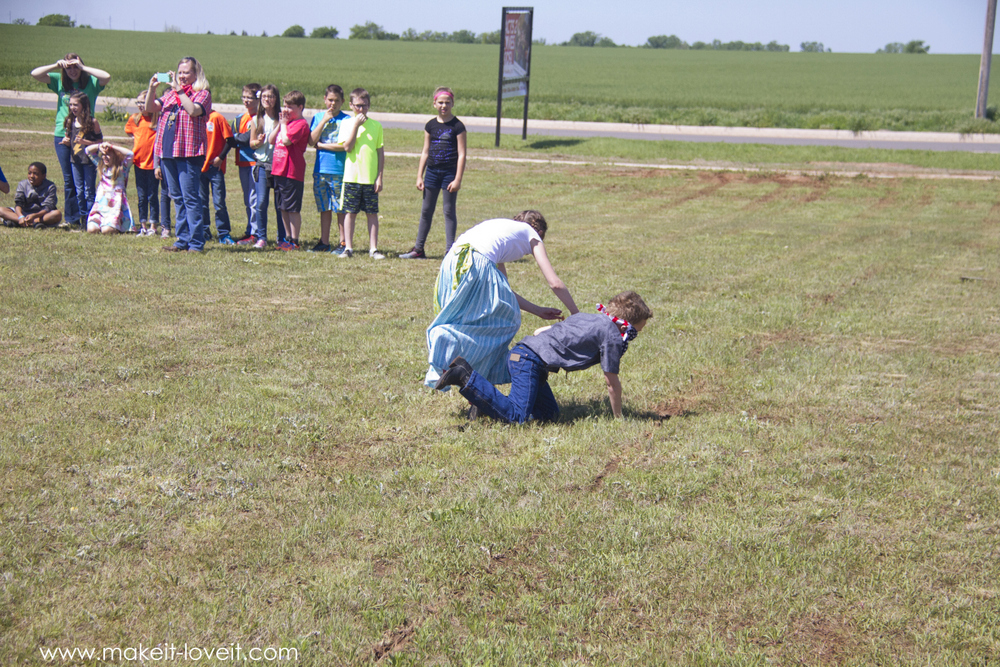 But another member of her “family” luckily grabbed a different flag….so they were able to spread their blankets, eat their picnic lunch, and enjoy their 160 acre plot of U.S. territory! :) 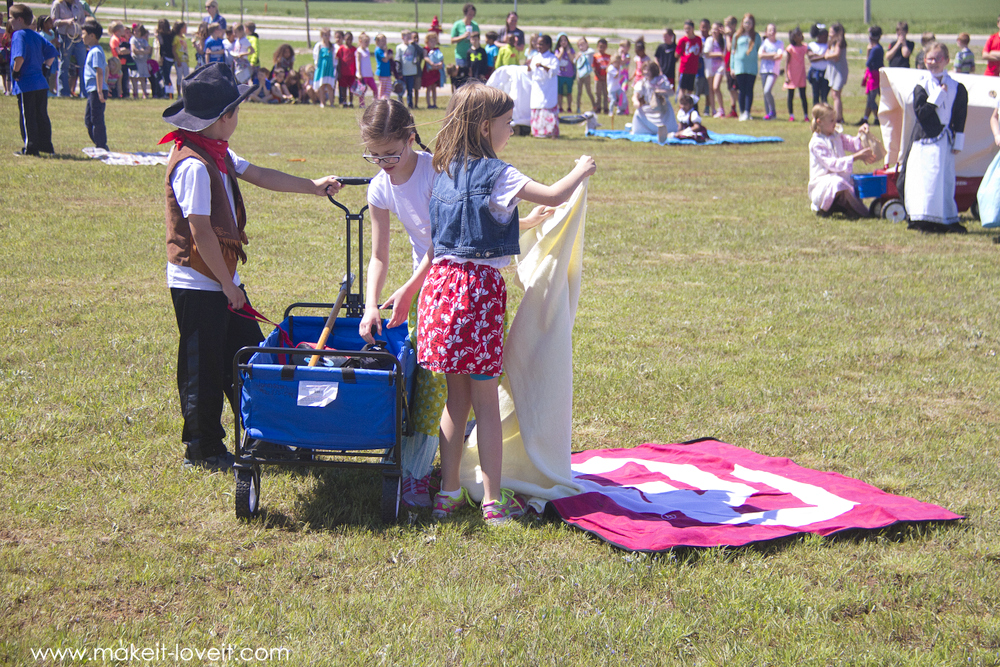 What a fun month long history lesson though, right?  These little 3rd graders had such a blast…..I love this little tradition at Elli’s elementary school!

Oh, and in case you’d like to make something similar, this is what I did!

For the skirt, I just made a very simple elastic waist skirt.  If you need some ratios for that, I multiplied Elli’s waist times 3 and then cut the width of fabric by that number.  (Her waist is 25 inches, so I cut my fabric 75 inches wide.)  For the length, I determined how long to make the skirt, and then added 2 1/2 inches.  Now, sew the fabric into a tube with RIGHT sides together and then fold under the bottom hem by 1/2 inch, another half inch, then sew in place.  Iron everything flat.  For the top casing, fold over 1/4 inch, then 1 1/4 inches, and then sew in place, leaving an opening to insert your 1 inch elastic.  (If needed, refer to this 10-Minute Skirt tutorial…..or browse through any of the other skirts over in the Clothing Tutorial section of this blog.)

The apron is also very simple, and was made just like the apron for this Granny Costume tutorial…..except, I left off the top portion (but you could add it if you want).  As for proportions, I cut the main piece about 3/4 of the length of the skirt and then the same width as her waist .  Then I hemmed the sides and the bottom by folding under 1/4 inch, another 1/4 inch, and then sewed in place.  Then I gathered in the top raw edge of the apron just like the granny costume tutorial I linked about, but I cinched it down to half the waist length….so I cinched it down to 12.5 inches.  Then, I added the waist tie, just like the apron tutorial above.  DONE! 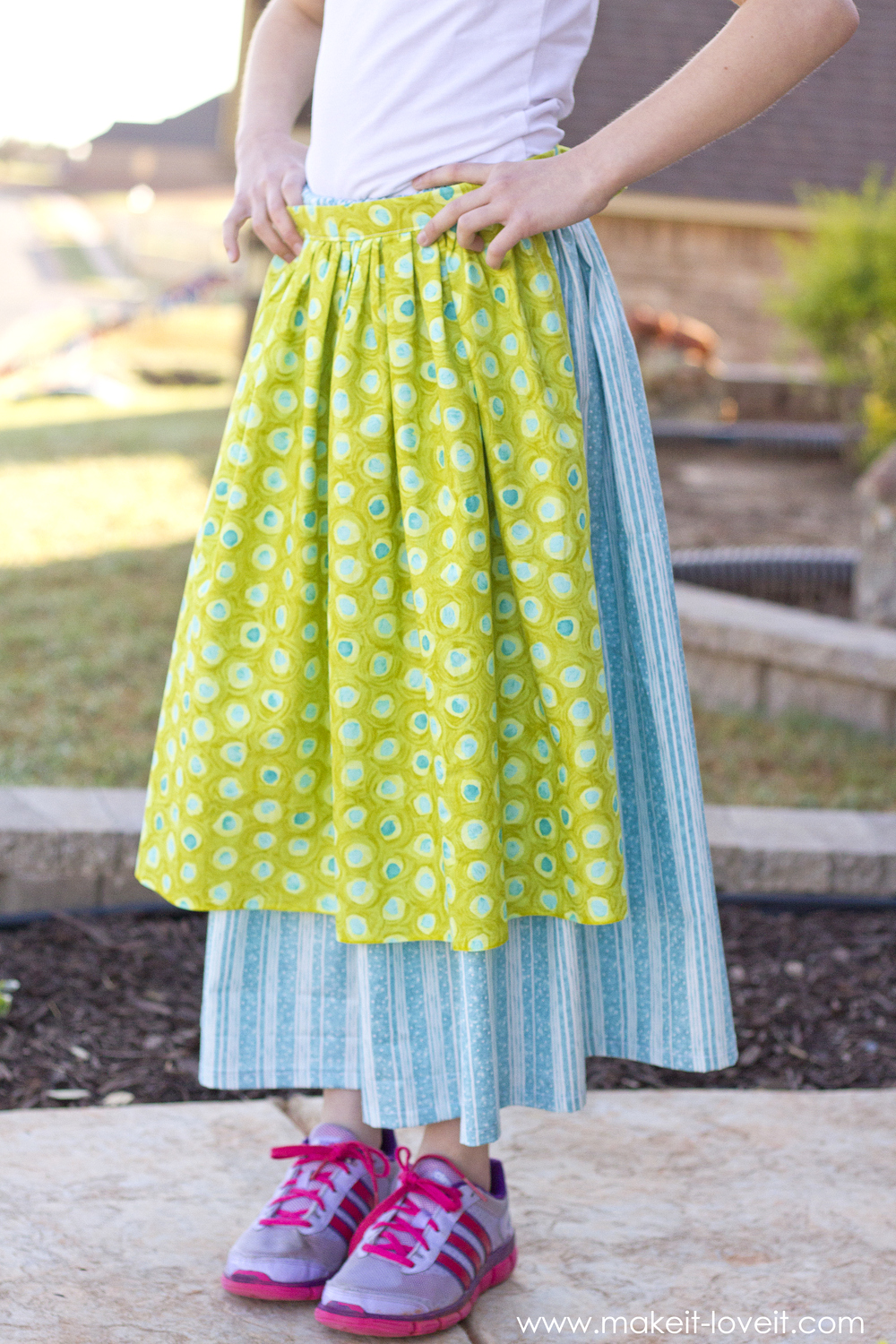 As for the bonnet……I wanted something very basic.  I didn’t want it super fussy and didn’t want the neck flap that costume bonnets sometimes have.  I also didn’t want a super huge floppy brim.  I actually looked online for a tutorial and found several that could work but not all had a tutorial.  But I ended up making mine most like this one….but I changed it up a bit and added a casing for the elastic along the full length of the back and changed up the proportions just a bit. But, if you’re needing to make one, use that tutorial….it should work just fine!  If you’d like to see exactly how I made mine, let me know!  If there are enough of you that want to see more specific instructions and a full tutorial, I’m more than happy to make that for you guys! :)

And that’s it!  Whether you need a costume for a Prairie Girl assignment, a book report, a costume party, or for simple dress-up……hopefully this simple costume idea will work perfectly for you!

Ashley Johnston is a professional DIY costume maker, sewist, crafter, and owner of Make It & Love It. She is a mom of 5 and a wife to a very patient (with my craft clutter) husband. In case you’re wondering, she always chooses crafting/sewing/designing over mopping/dusting/wiping base boards……but bathrooms/laundry/full bellies are always attended to. Whew!
Author Bio Box by HOI
Author:
Ashley Johnston
Categories:
Mentions:
Not Specified
Keywords:
Prairie (or Pioneer) Girl Costume
Last Updated:
November 19, 2019 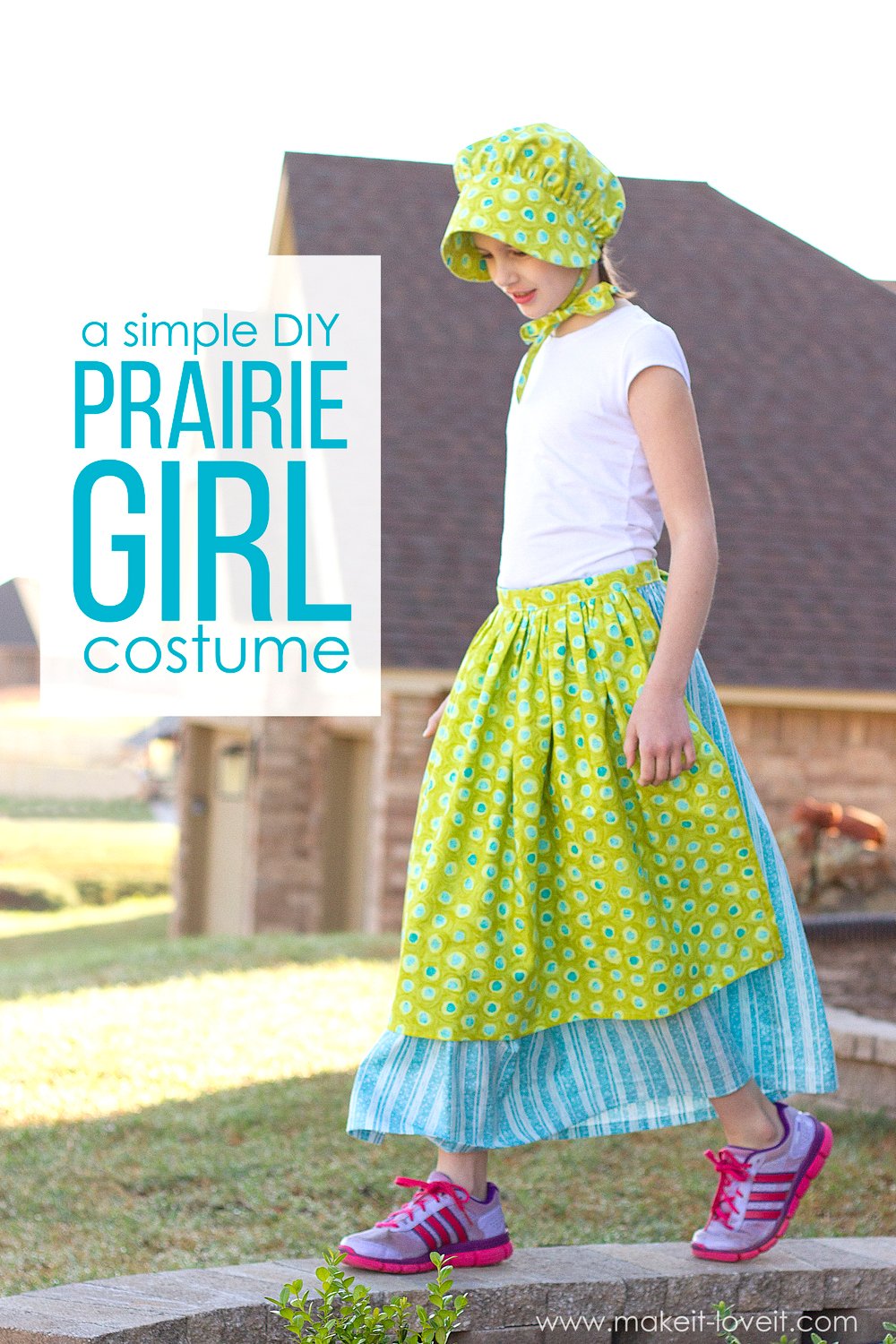 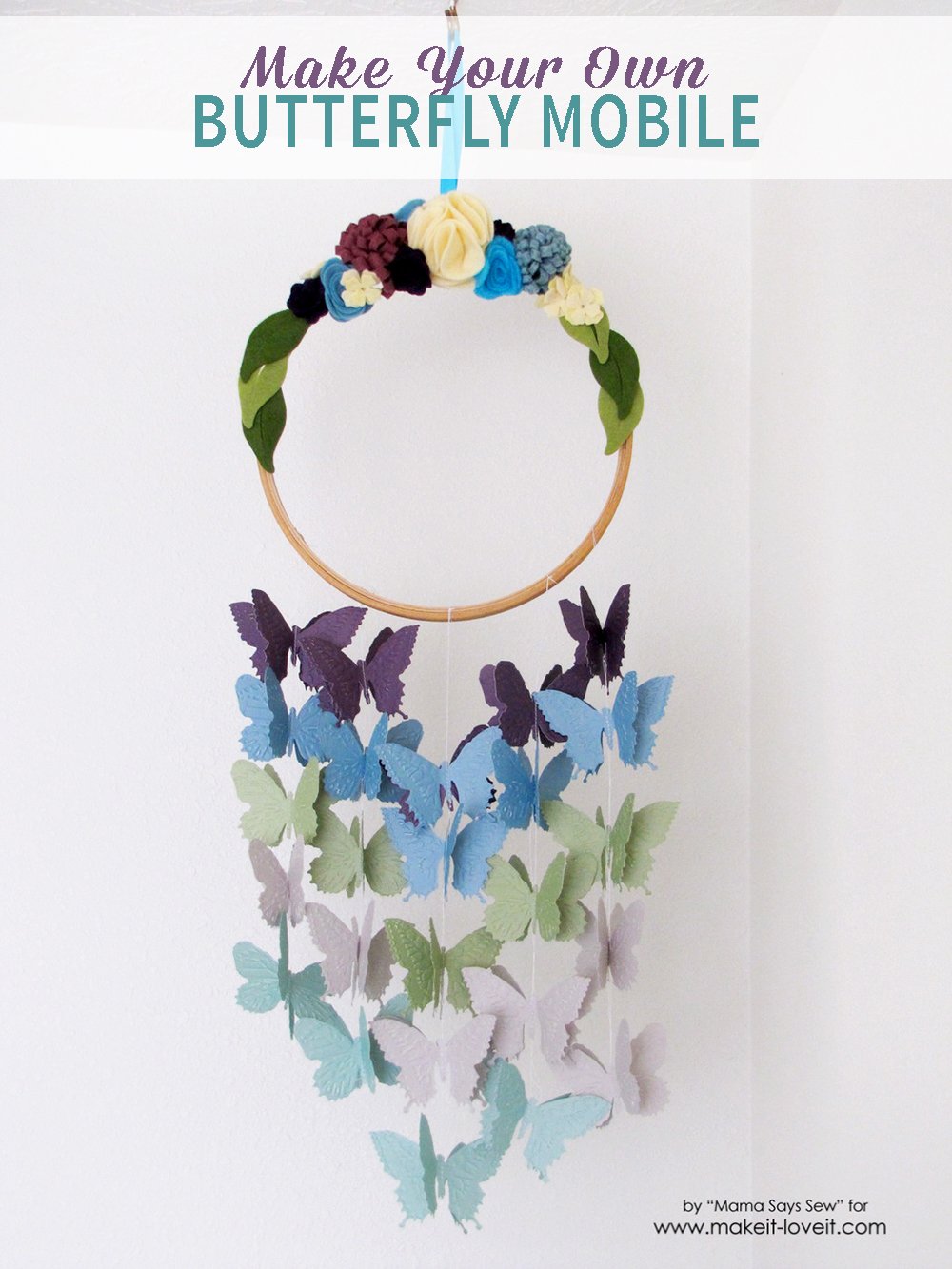 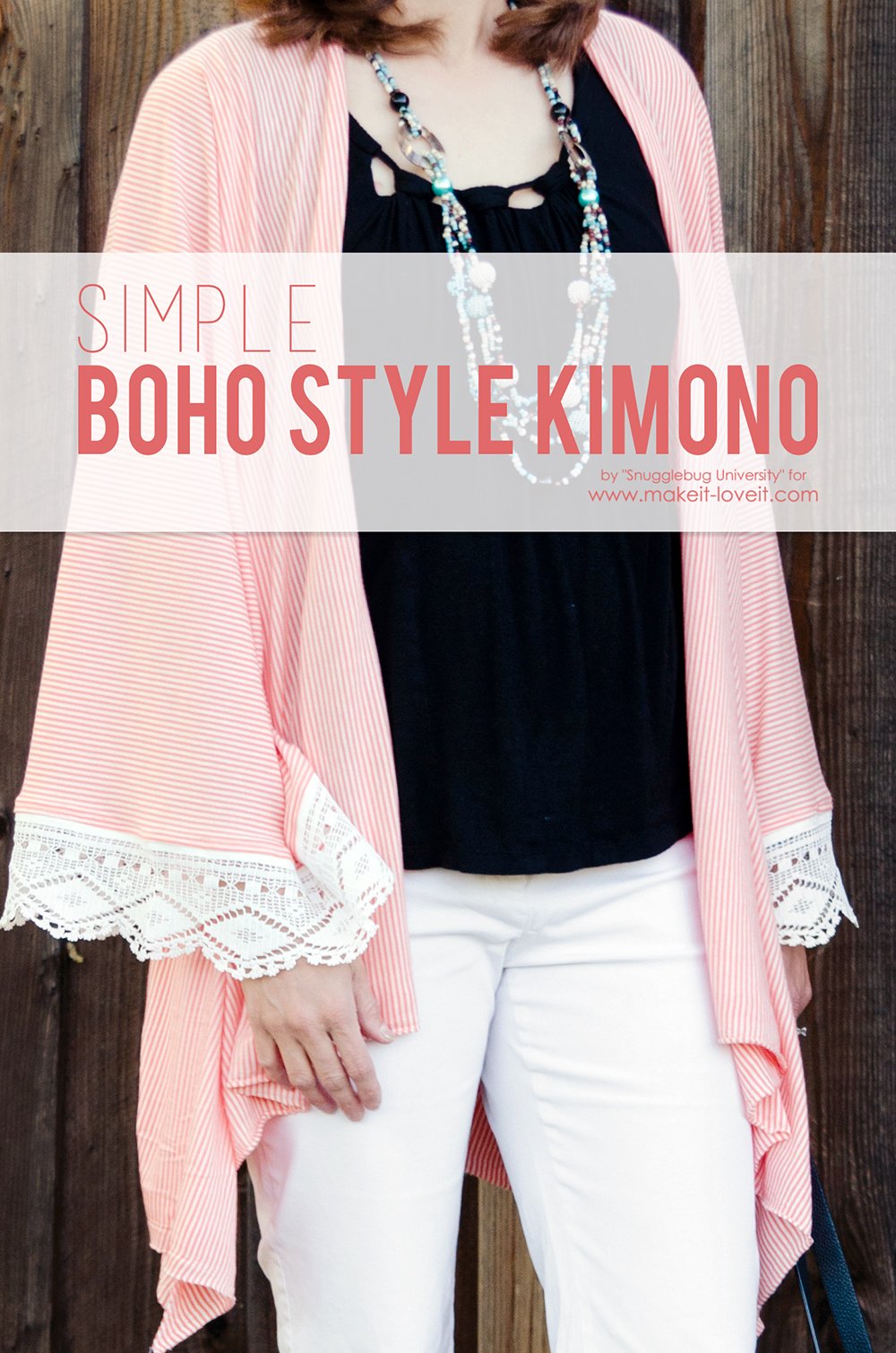