Okay, time for another costume idea.  Because, YES OH YES, there’s still plenty of time to make a few costumes before Halloween!

When I asked for simple Halloween Costume ideas a couple weeks ago, several of you mentioned wanting to make a shark costume.

Okay.  Done.  Sounded fun to me!  And good news……..it’s pretty simple.  And is just a variation of something you may have already seen floating around the web.

HOWEVER.  This guy has an intimidating fin, to help him swim through dark ocean waters.  (Okay, that shark face may not be intimidating…..but his fin sure is. Ha!) 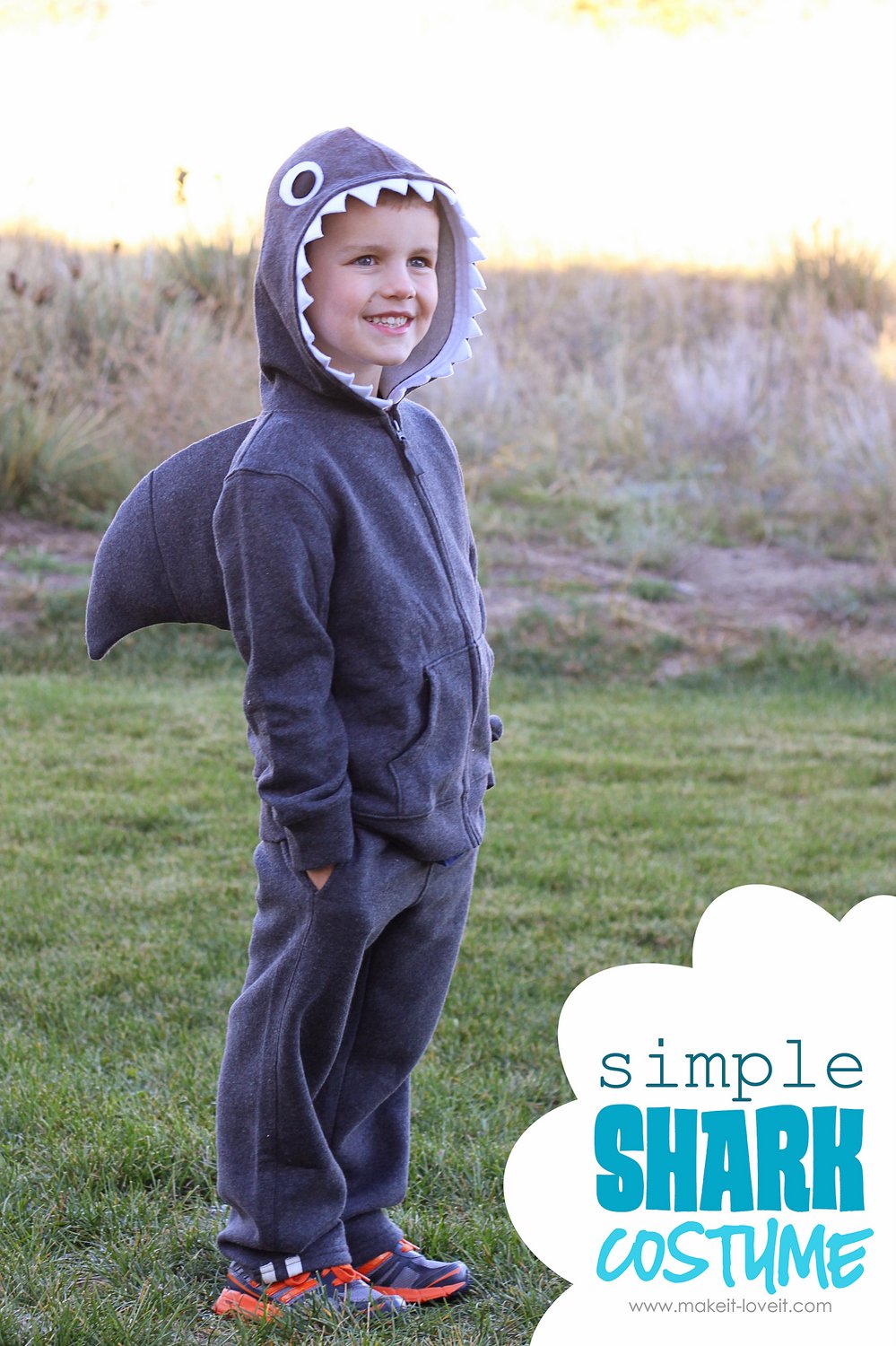 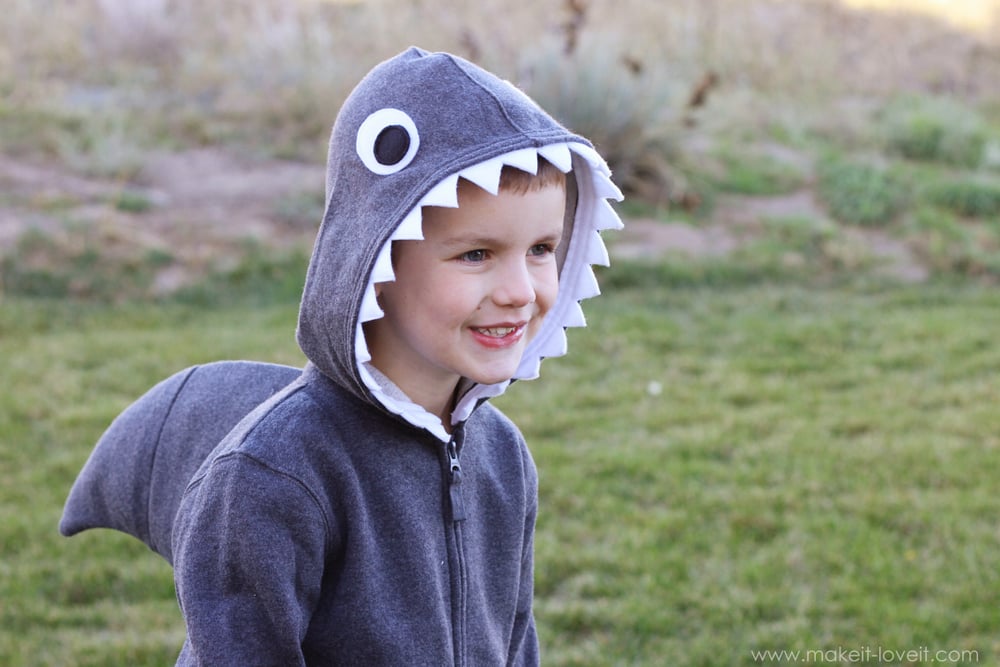 I’ve seen this shark sweatshirt idea floating around for a year or two and was just going to share the link to those of you who are interested, to Martha Stewart’s tutorial.  However, at the last minute, I decided to just make one real quick and add a quick dorsal fin on the back.  Any my little guy Connor LOVED IT!!!!

And don’t worry, there’s a piece of plastic canvas in there, helping it keep its shape…..but also a little padding to give it some shape. 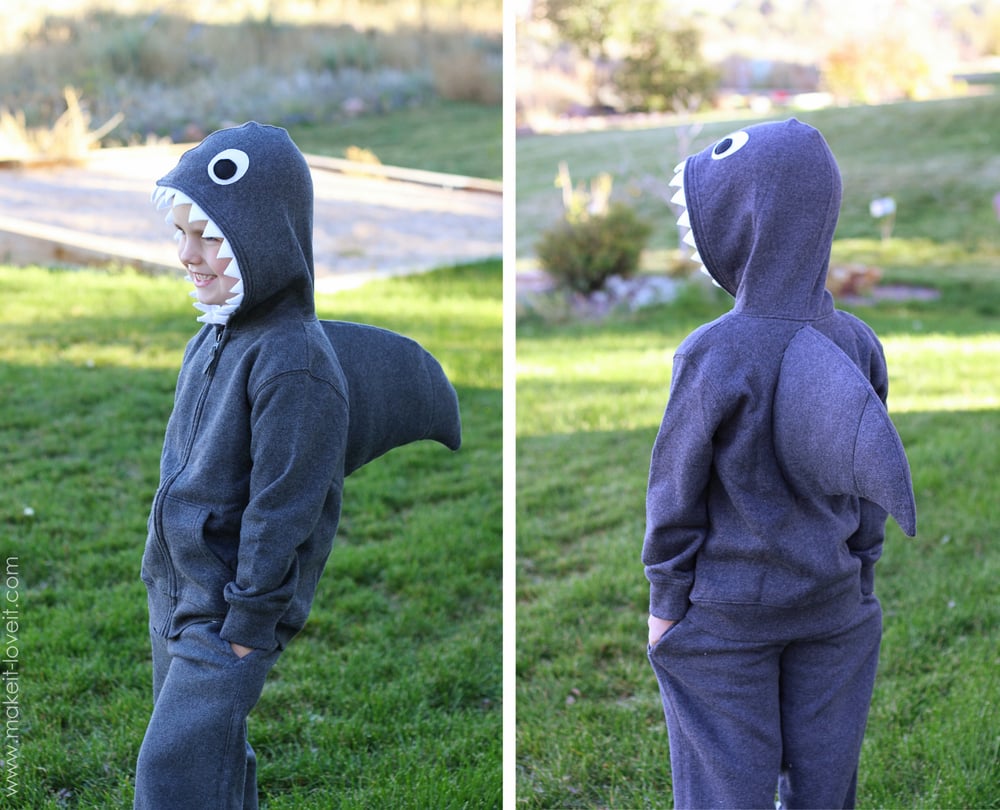 The eyes and teeth are sewn right onto the hood of the sweatshirt……and let that little face poke right through. 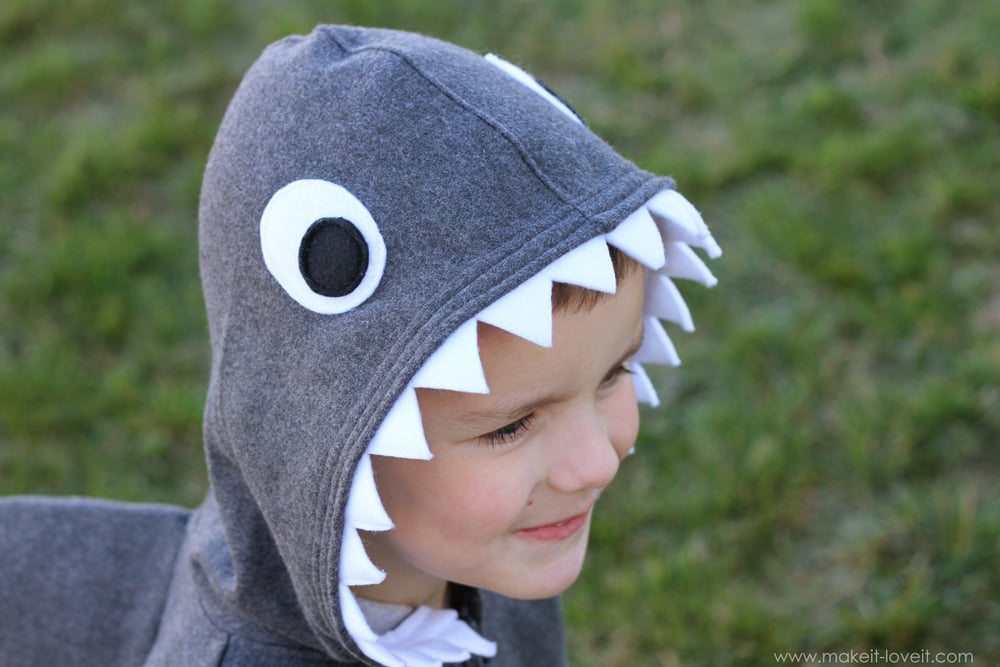 And just think……those of you who live in super chilly climates, your little trick-or-treaters will be cozy warm in their costume!  (But just be sure to teach them a more ferocious stare!) 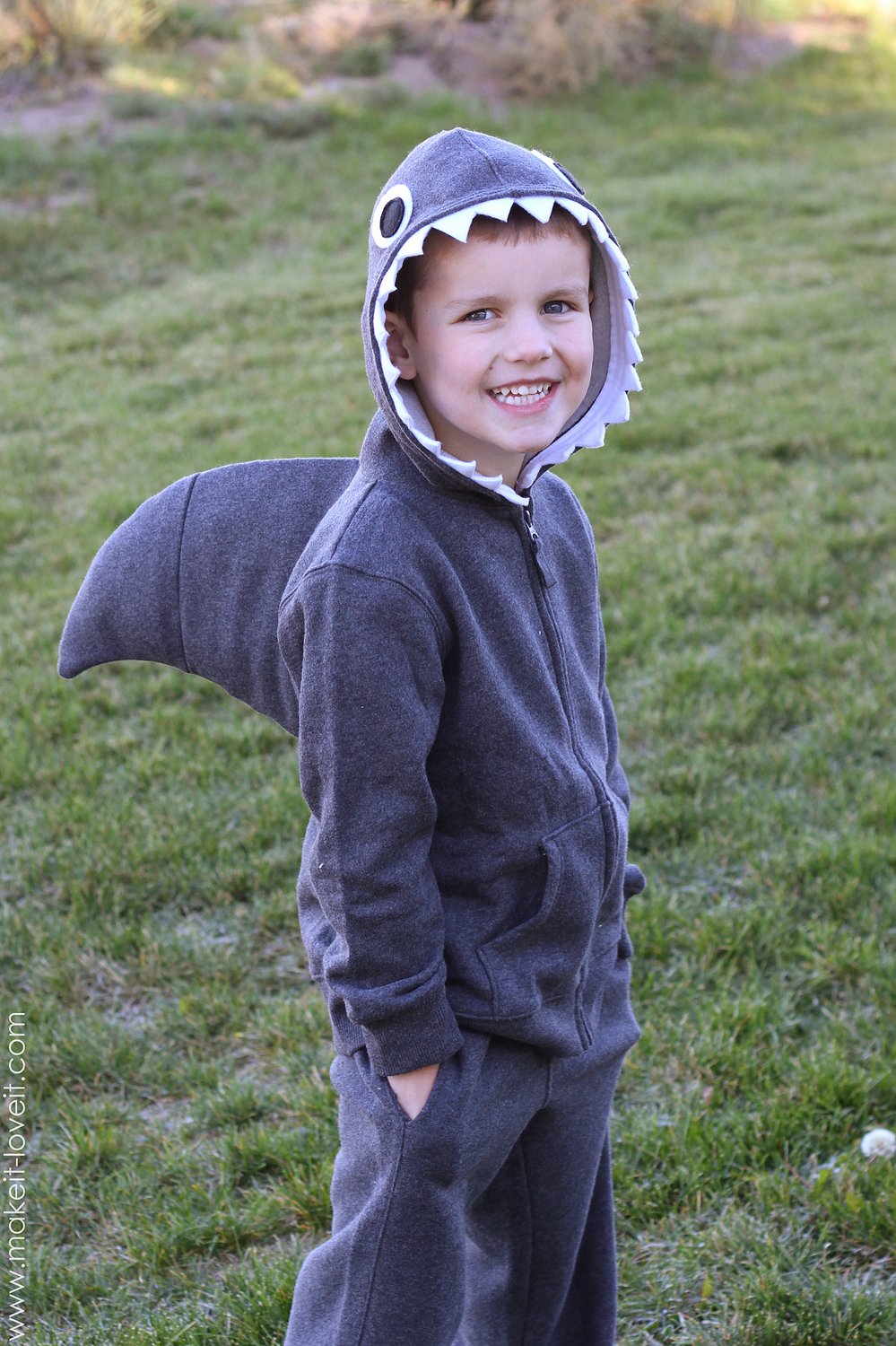 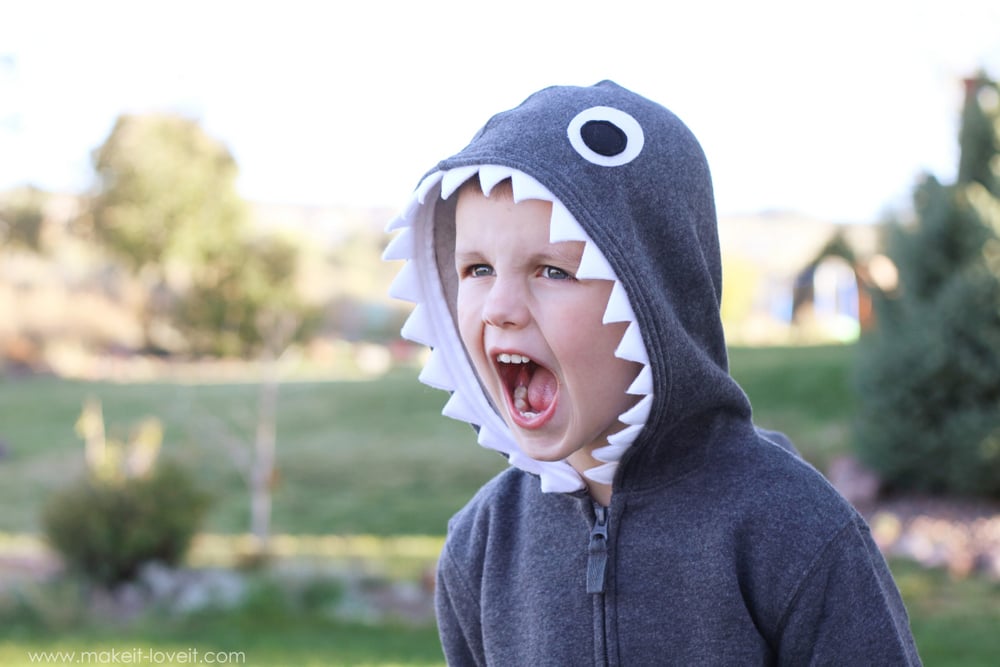 Ready to make your own Shark Costume??

Like I mentioned before, the concept of this costume has been around awhile. (And I think most give credit to Martha Stewart’s tutorial.  But maybe there are others??)

So, if you’d rather skip the fin…….just stick with the eyes and teeth.

However, a shark isn’t a shark, without his dorsal fin! :)

First of all, measure the opening of the hood, where your teeth will go. 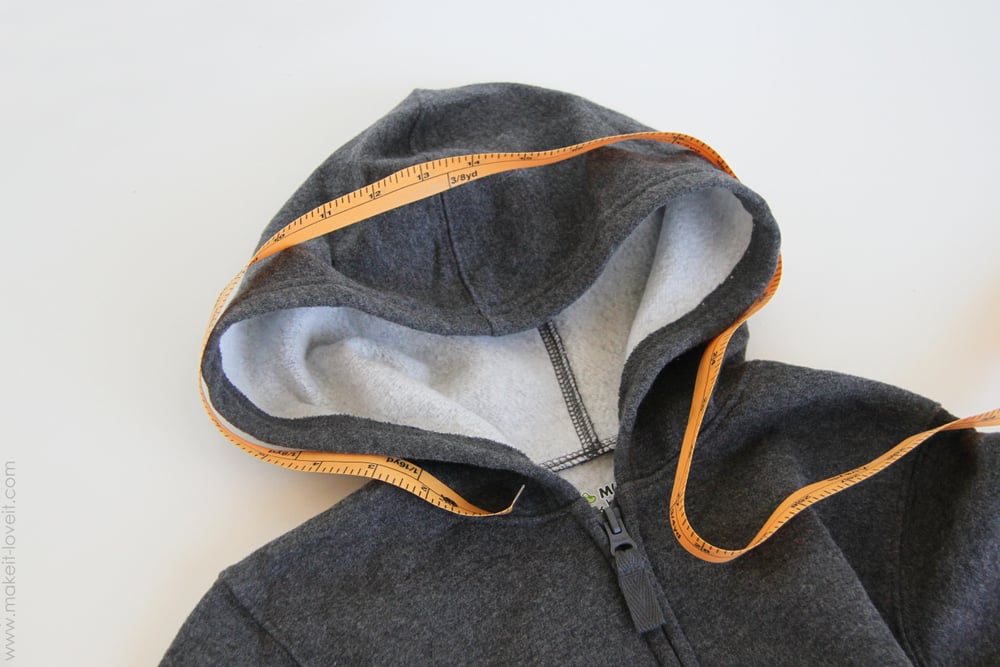 Then, cut two strips of white felt that are 2 inches longer than you hood measurement…..and are about 2 – 2.5 inches wide.

Place the two strips together and sew a line of zig-zags along one of the long sides.  My zig-zags were about 1 inch tall and 1 1/2 inches wide……but this can vary.  (Just be sure you keep the tip of each tooth lined up along one side of the 2 strips and leave extra room along the other side for attaching to the hood.) 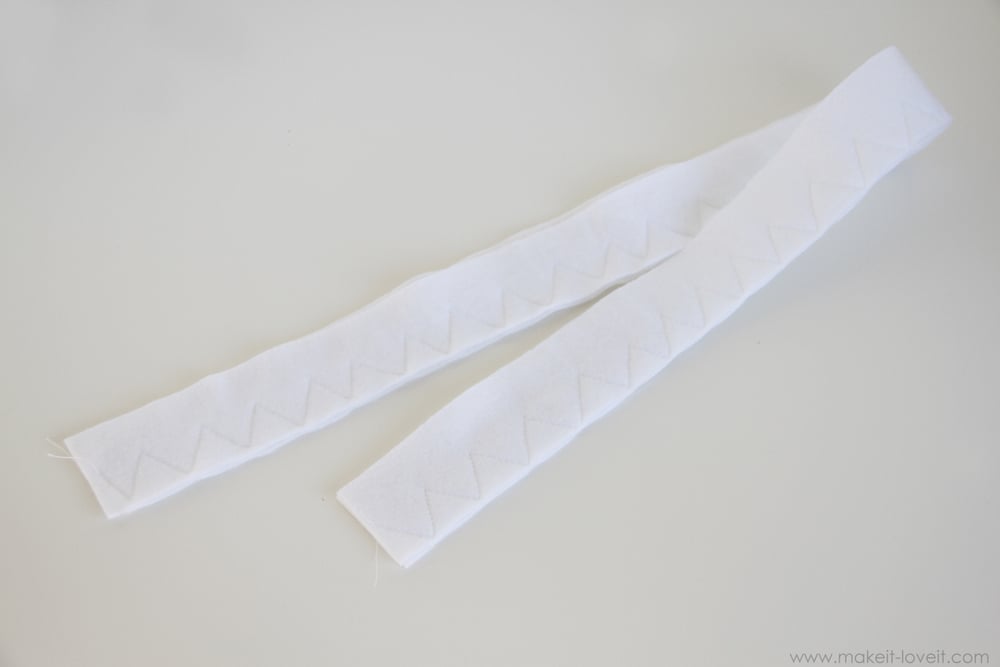 Then, cut out the extra felt, making sure to NOT clip through any of your seams. 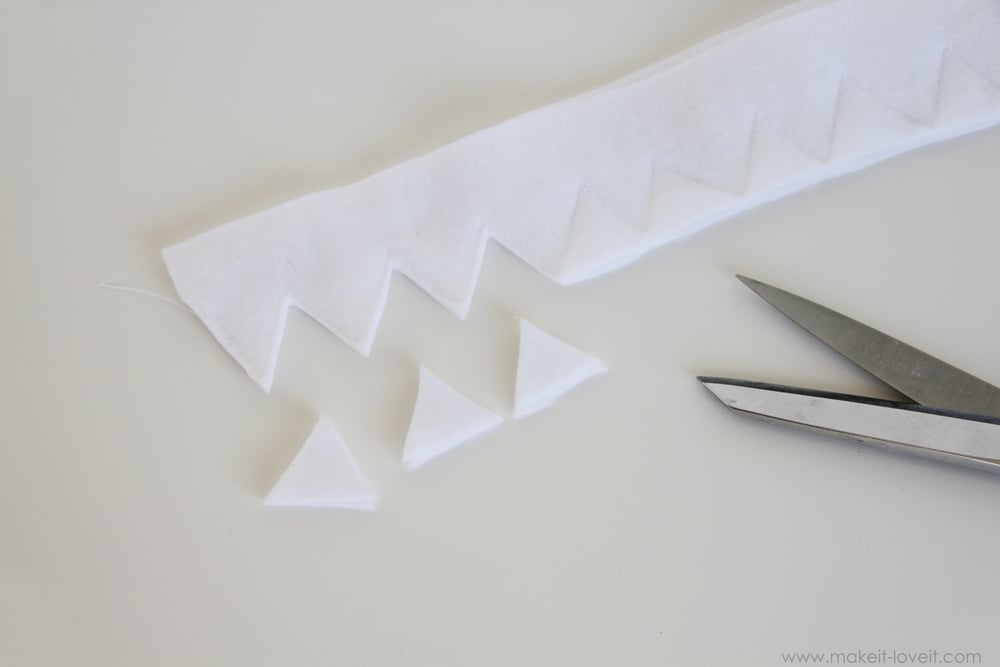 Place your line of teeth along the inside edge of the hood, only allowing the triangles to show.  Pin in place (and cut off any extra from the ends). 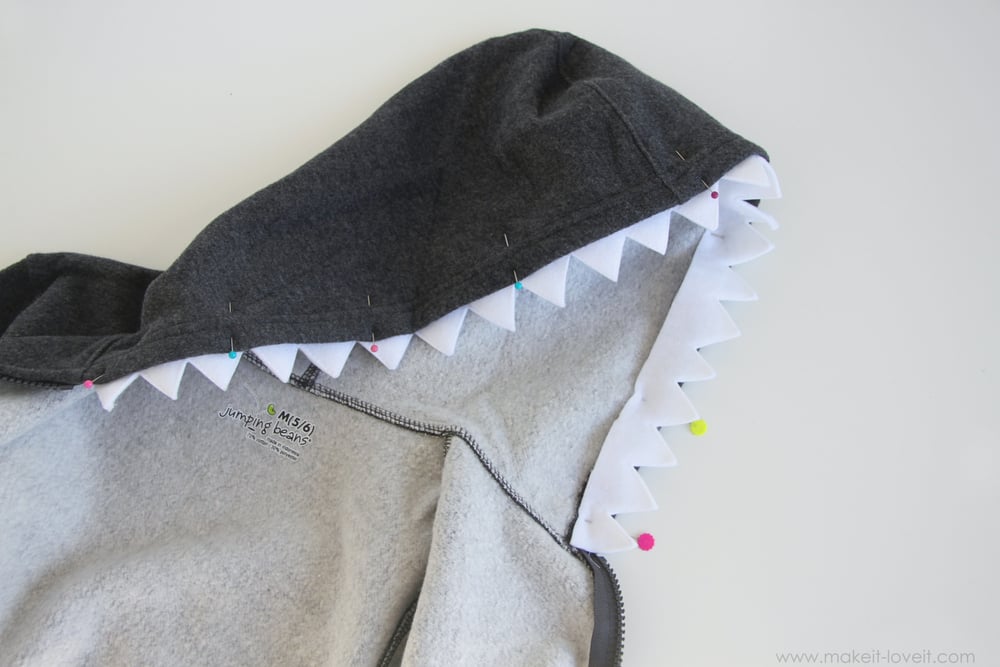 Sew in place, with two parallel seams……making your teeth nice and secure to the hood. 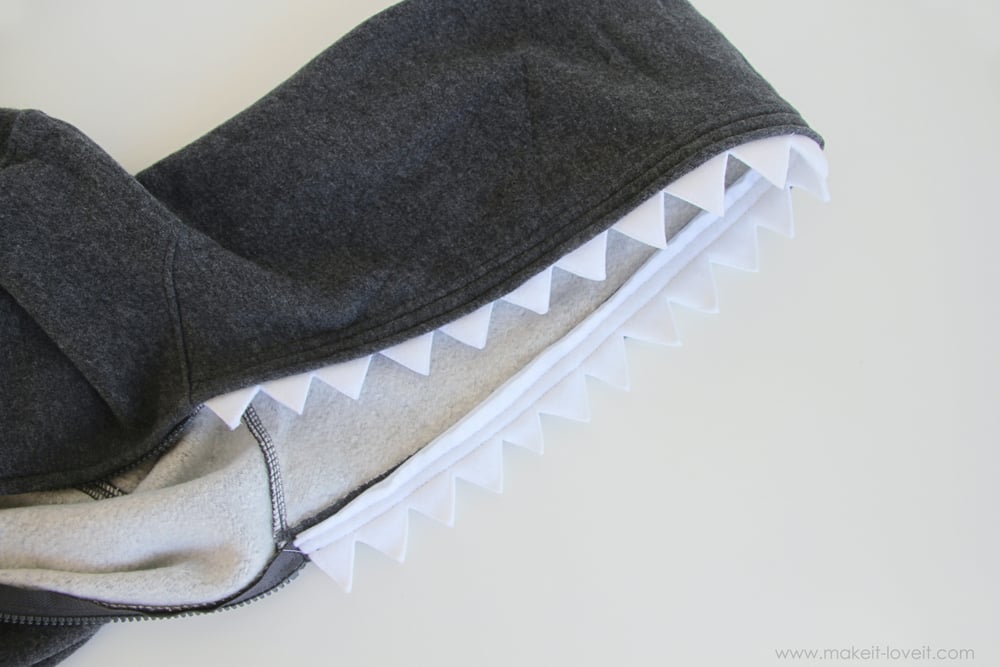 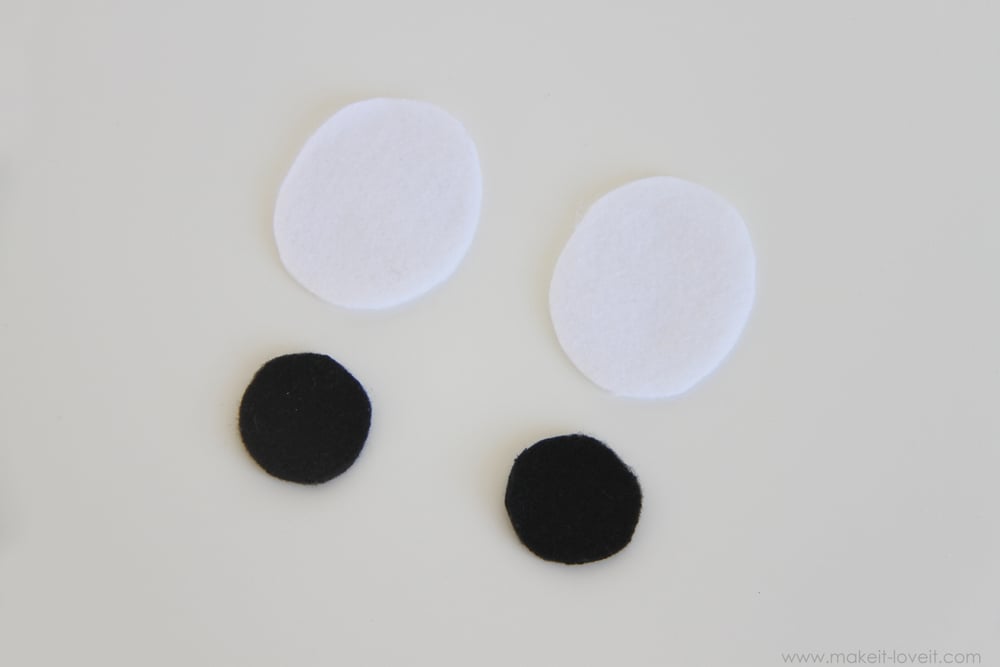 Place the black circles on the white ones, and sew around the outer edge of each black circle. 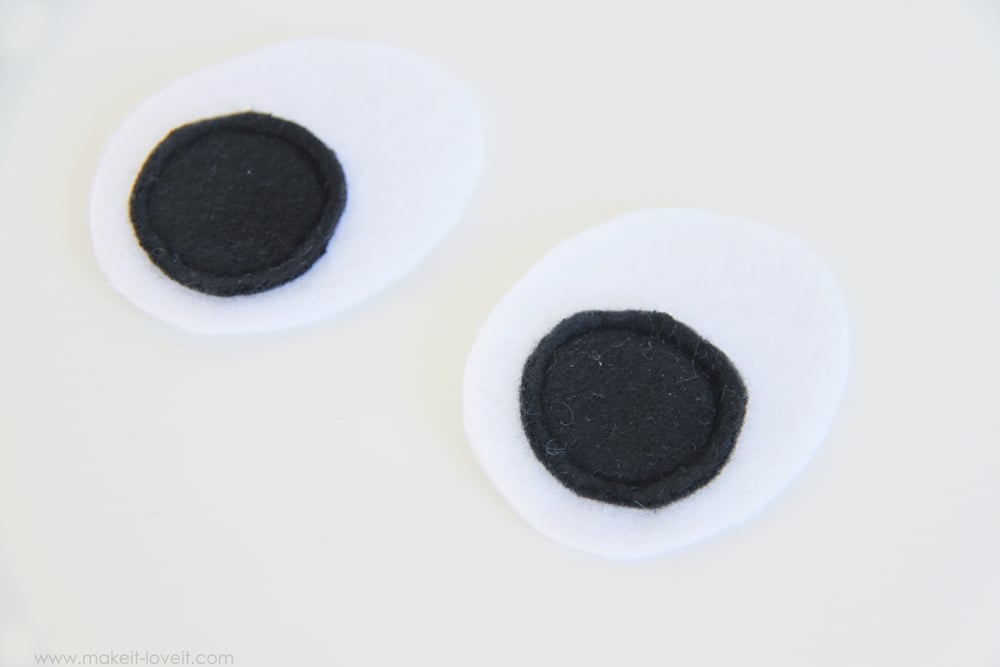 Then, center each eye on either side of the center seam of the hood.  Sew around the white ovals, securing them to the hood. 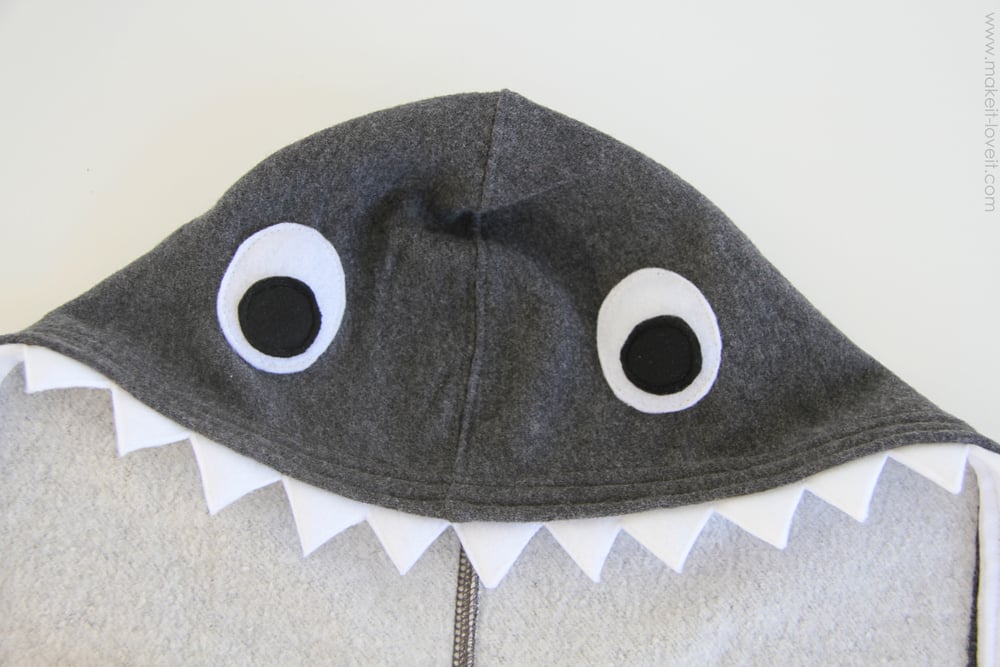 Next, cut a fin shape from your canvas.  (The size of this can vary…….in fact, my husband thinks the one I made is a little large.  yeah, maybe…..but it all depends on preference.  As a guide, my fin is about 10 inches tall and about 9.5 inches wide at the base.) 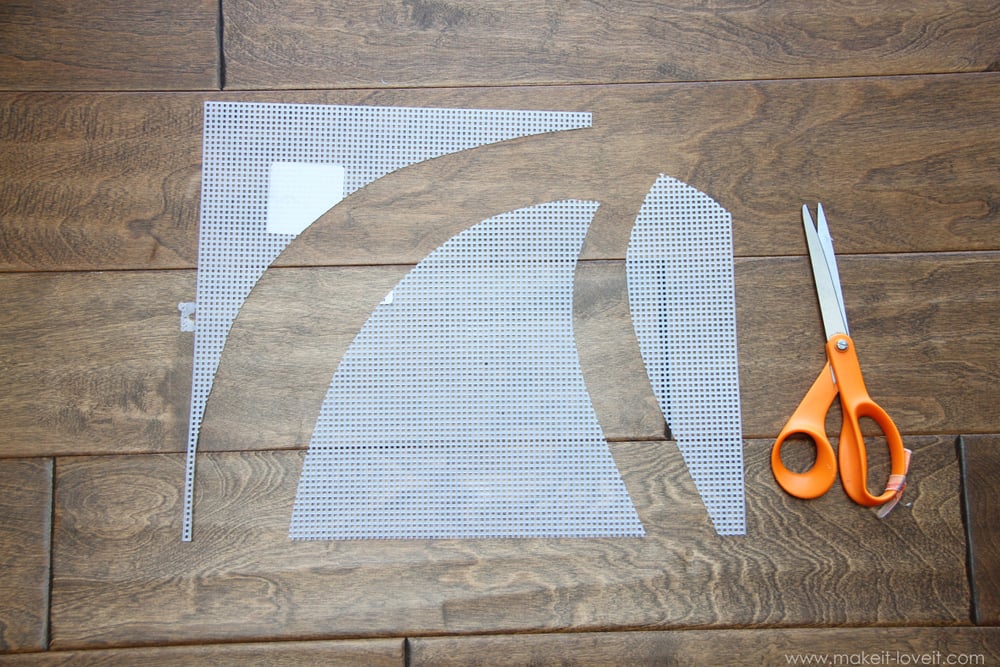 Now, cut open your pant leg from the extra pair of sweatpants, right along one of the side seams.  I would have cut along the inner seam but I didn’t want to pick out that white stripe along the side of the pants, so I cut along the white strip. 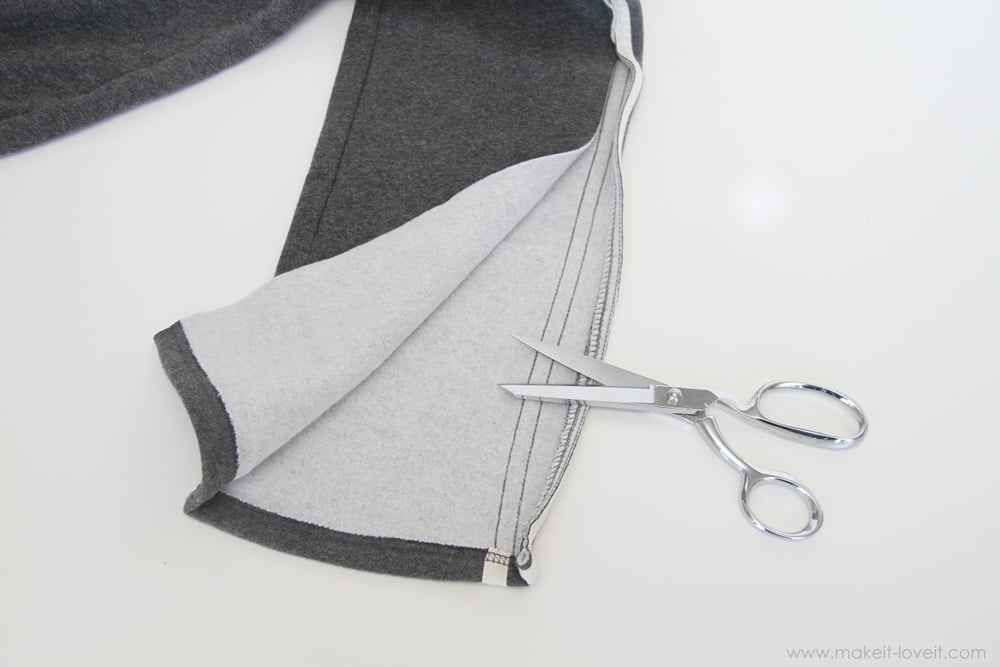 Cutting the leg open creates a large flat piece of fabric to work with.

Now, place your canvas fin on your fabric and cut around the fin, giving yourself a 1/2 inch on all sides (for a seam allowance)….except along the bottom, give yourself an inch or so of extra fabric. 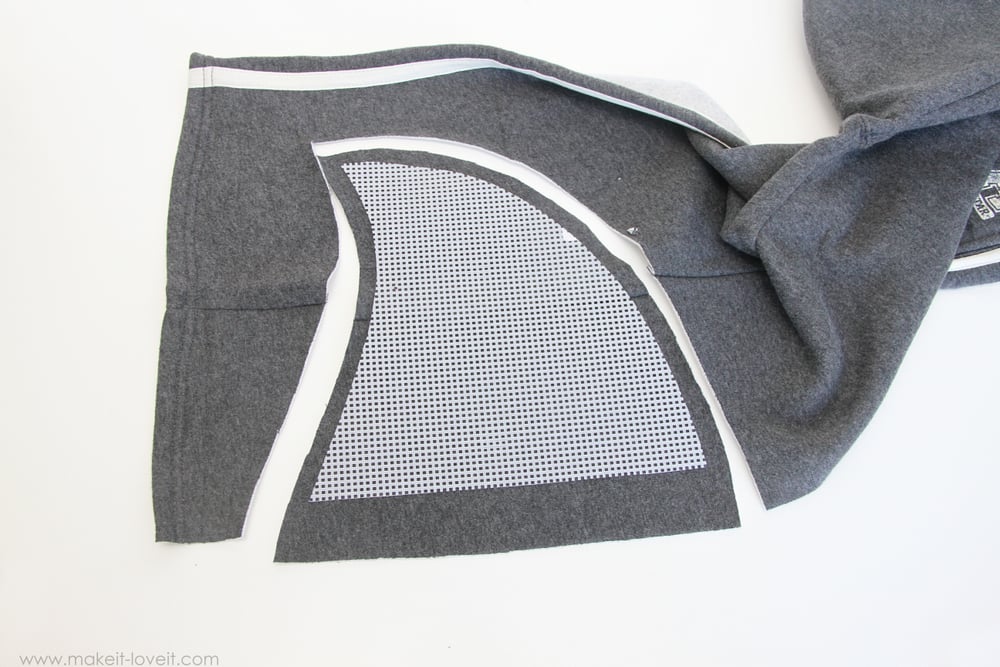 Use the first fabric fin you cut out and place it face down on more of the fabric (so that the “right” sides if the fabric are together) and cut out a second fabric fin.  Keep the fins together, with “right” sides facing each other and sew around the two sides, using a 1/2 inch seam allowance. 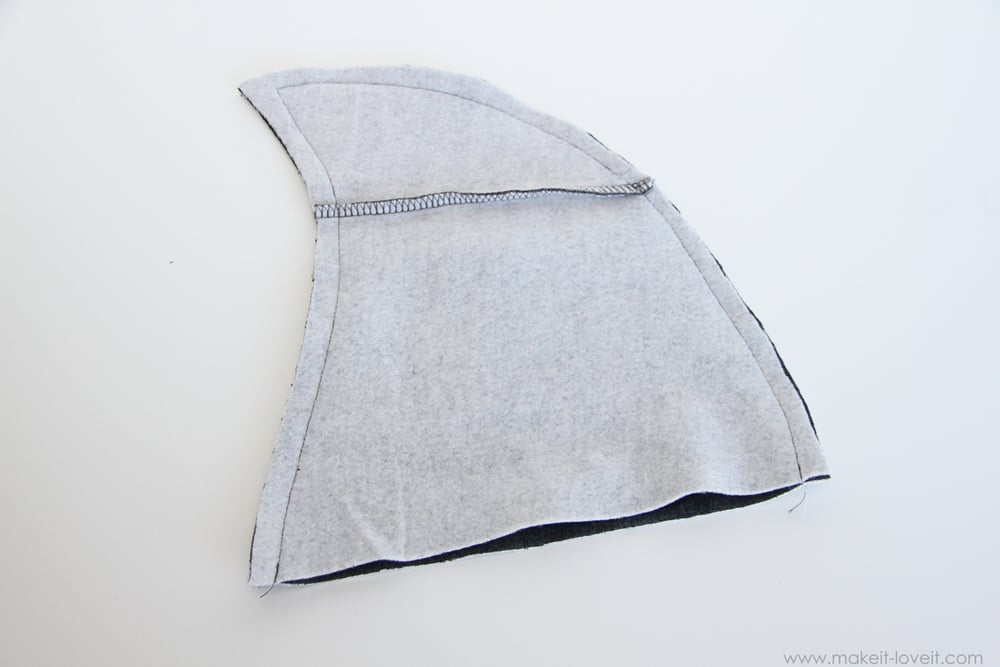 Now, cut off the pointy tip of fabric and cut notches along the mountain curve (the right side below) and cut slits into the valley curve (the left side below).  Just be sure you DON’T cut through your seam.  (Not sure why you should clip the curves and corners??) 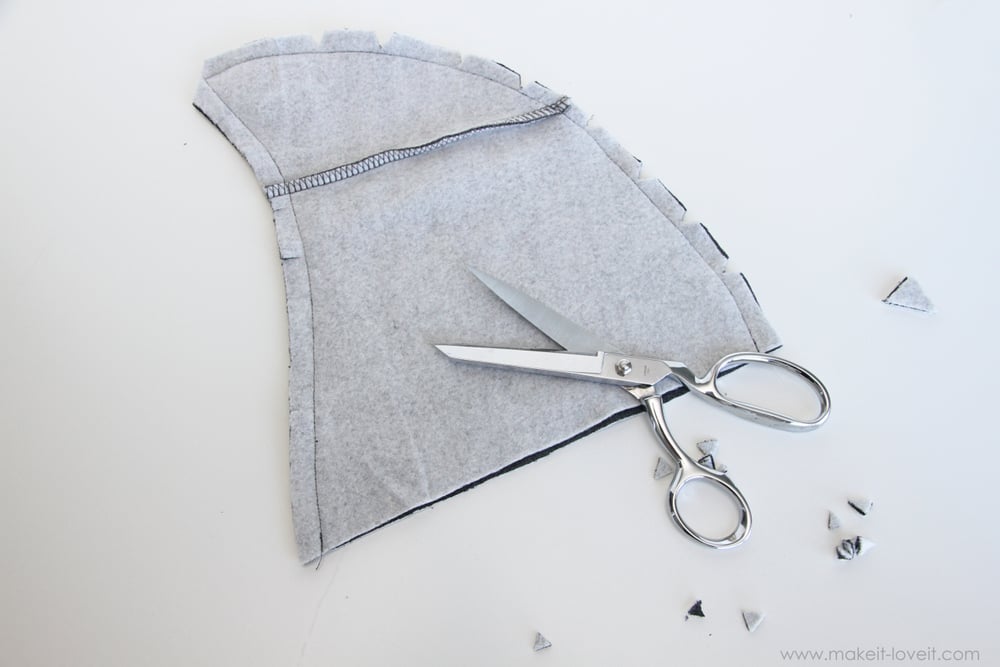 Turn the fin right side out and slide your canvas fin inside. 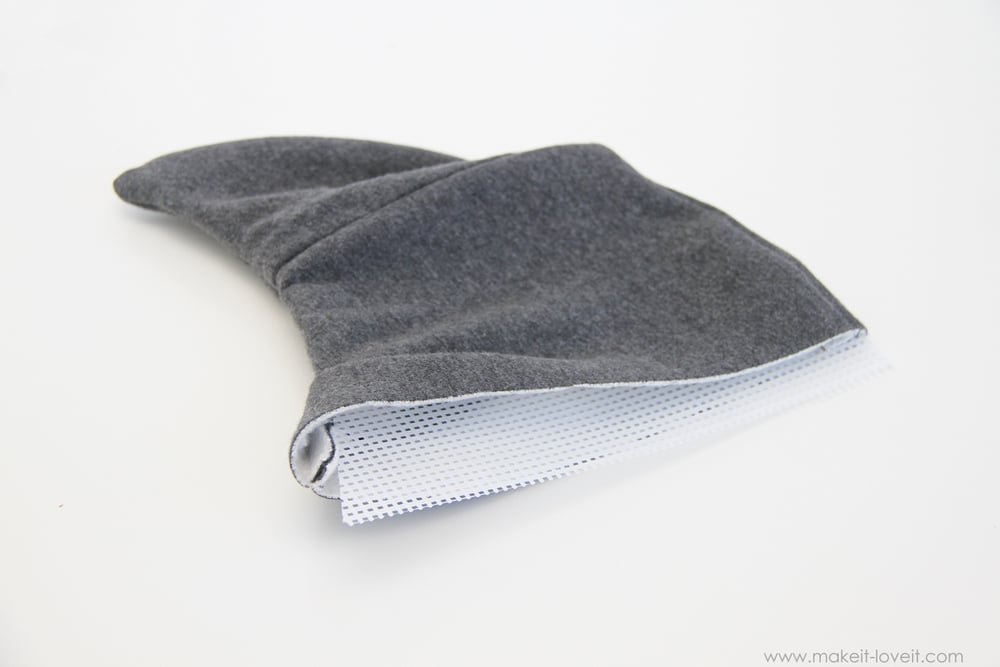 Then, place a little batting on both sides of the canvas to help plump out the fin.  (You don’t  need to stuff it full……just a bit to give it a little more dimension.) 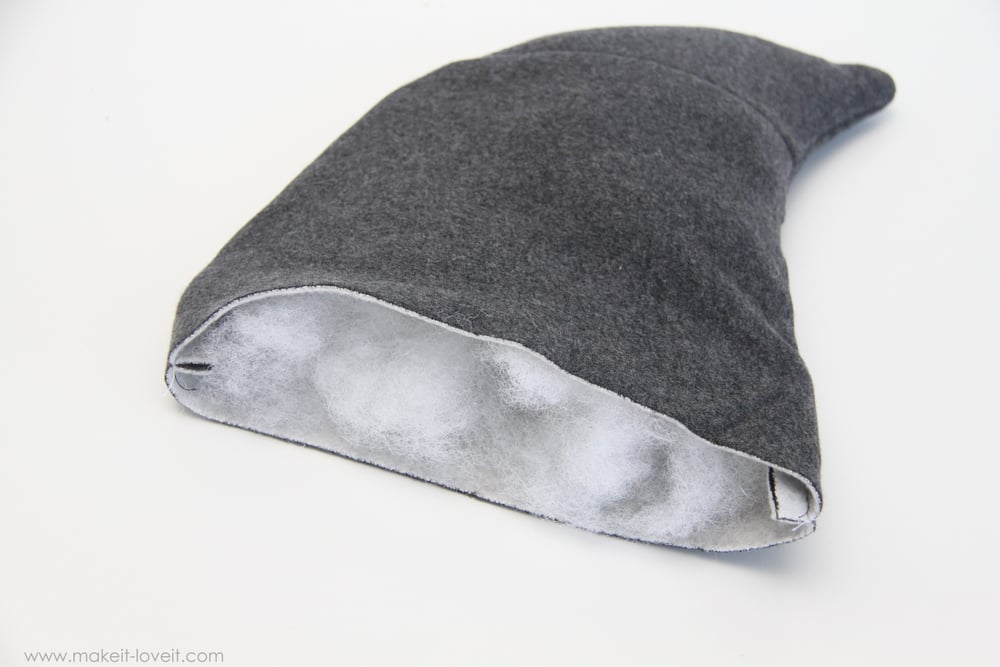 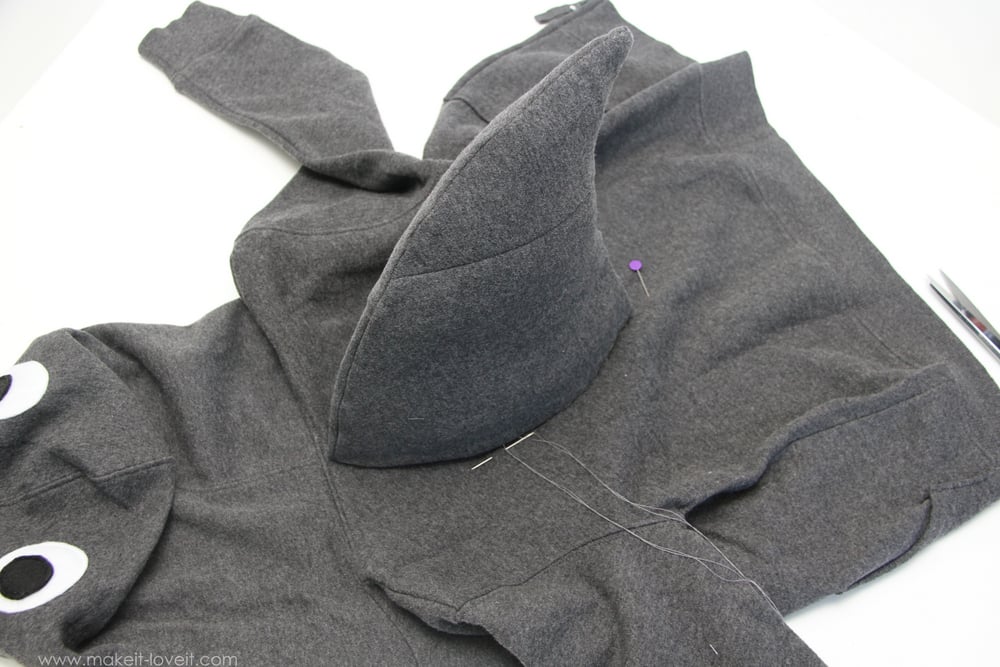 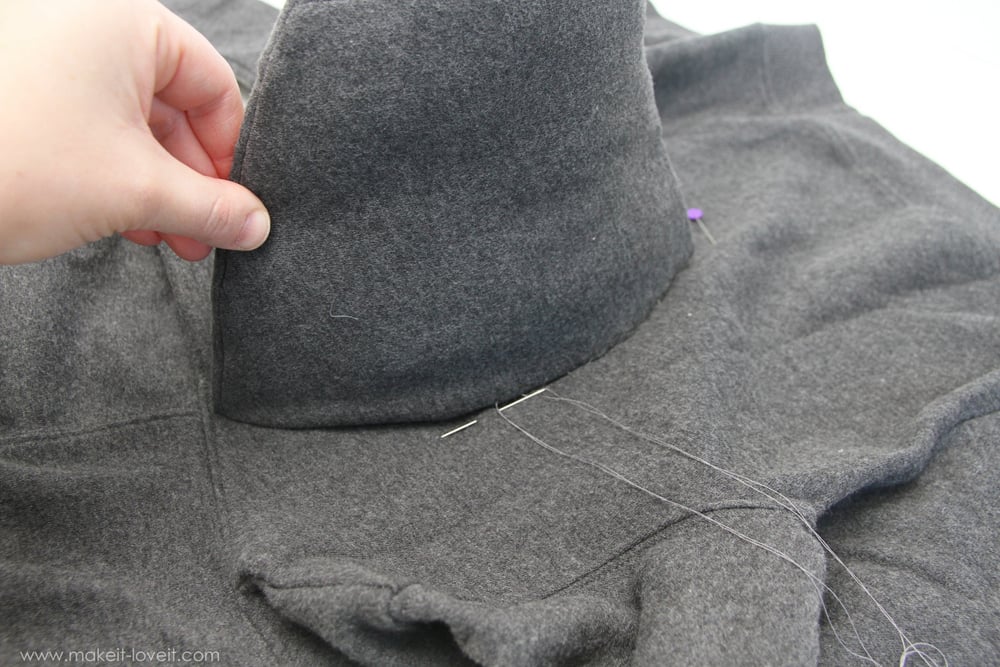 And one last thing……this sweatshirt set came with white lines along the legs of the pants.  I just unpicked the lines of fabric so that they didn’t distract from the costume.  (And in case you’re curious, I bought this sweatsuit from Kohl’s.) 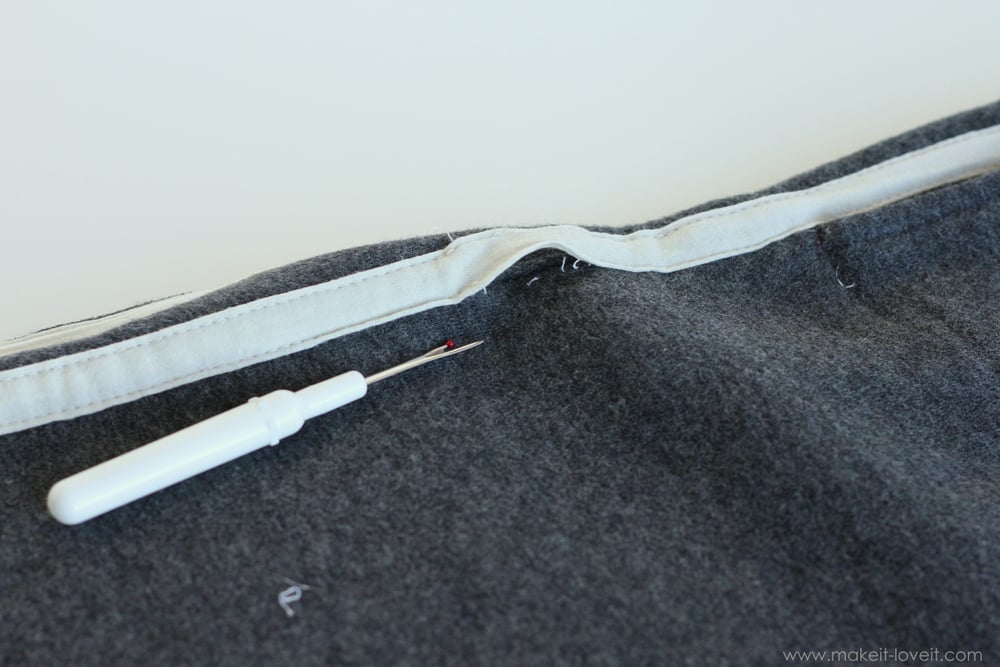 And that’s it.  A ferocious, yet friendly shark…….ready to swim the ocean waters!! :) 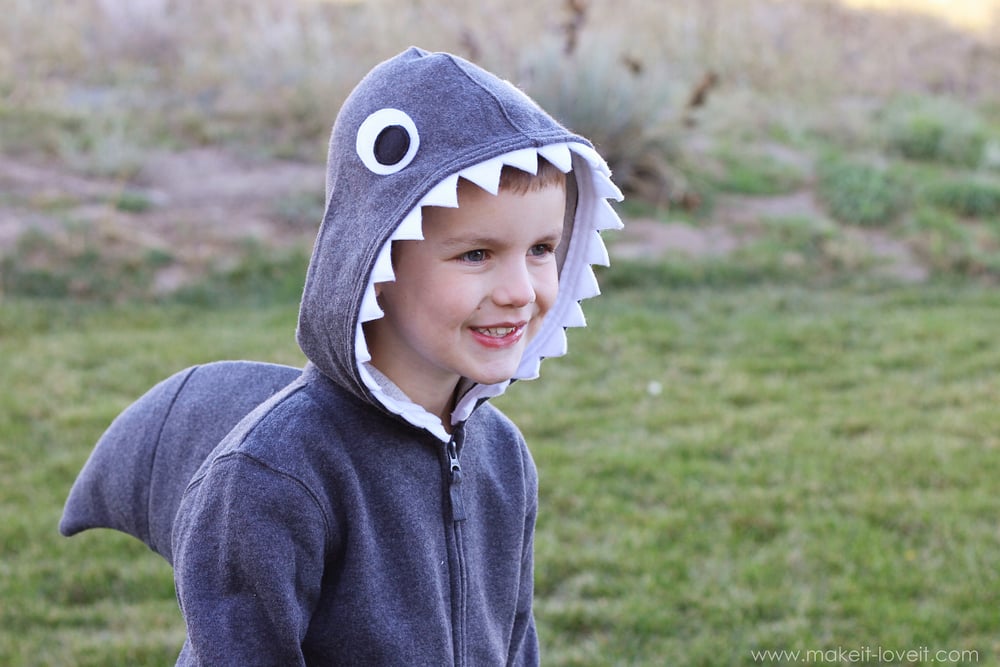 Have fun with it!

Ashley Johnston is a professional DIY costume maker, sewist, crafter, and owner of Make It & Love It. She is a mom of 5 and a wife to a very patient (with my craft clutter) husband. In case you’re wondering, she always chooses crafting/sewing/designing over mopping/dusting/wiping base boards……but bathrooms/laundry/full bellies are always attended to. Whew!
Author Bio Box by HOI
Author:
Ashley Johnston
Categories:
Mentions:
Not Specified
Keywords:
Not Specified
Last Updated:
September 21, 2019
Share20
Pin1K
Tweet
Email
1K Shares