My husband has always had a huge ol’ collection of them hanging in his closet.  He has always told me it’s the one thing in his “dressed-up” wardrobe, that he can really change up.  You know, dress pants and suit coats only come in so many colors…….so he likes having choices.  It makes me laugh because I’m pretty sure he has more ties than I do shoes.  And you better believe that each tie has the correct “feel” to it and the same stiffness.  Oh, and if he had to pick one tie print, he would choose a striped tie.  Every. Time.  He always says that a striped tie is a power tie.  Ha!  (He likes to show me pictures of powerful business men but also religious men in our church that he admires, all wearing striped ties…….and declares that “yup, the important ones wear stripes”.  It’s this ongoing joke between the two of us and if he’s ever wearing like a paisley tie, I tease him and say something like, “you must not be feeling it today”.  Haha!  Well, yeah, when my hair is up in a wet bun, I’m not feeling it either! ;) )

Anyway, Steve has too many ties to count.  So, I asked him the other day if he wanted to get rid of any.  For a really good “cause”.  (I didn’t tell him quite yet that I wanted to cut them up.)  Anyway, he agreed and gave me a pile of them.  Then, I told him I was turning them into Connor-sized ties……and he loved it. Whew!

I picked out a “power-print” striped one first……..and turned that long ol’ thing, into Connor’s new FAVORITE tie. :) 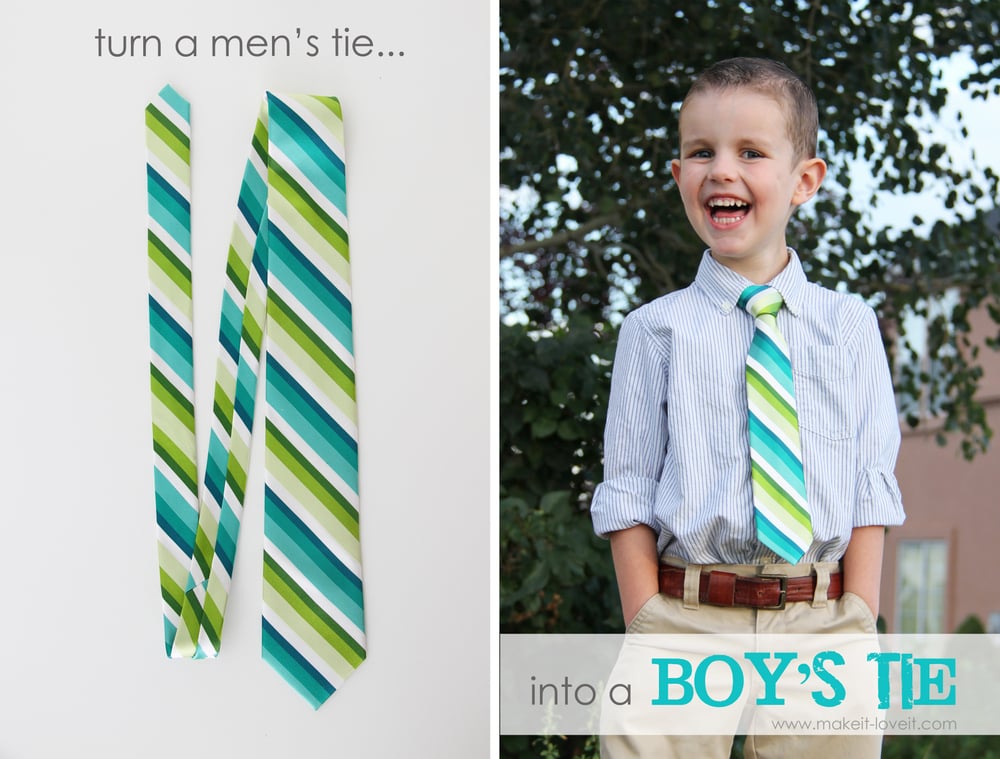 The two ends are from the original tie.  I just took some of the length from the middle and slimmed down the wide part just a bit……..and that’s it!  (Wait, why keep the two ends and chop out the middle???  Because re-constructing one of the tips would be a lot more work and are harder to make even and beautiful with silky fabric.  But don’t worry, the re-sewn edge will be hidden around their neck.) 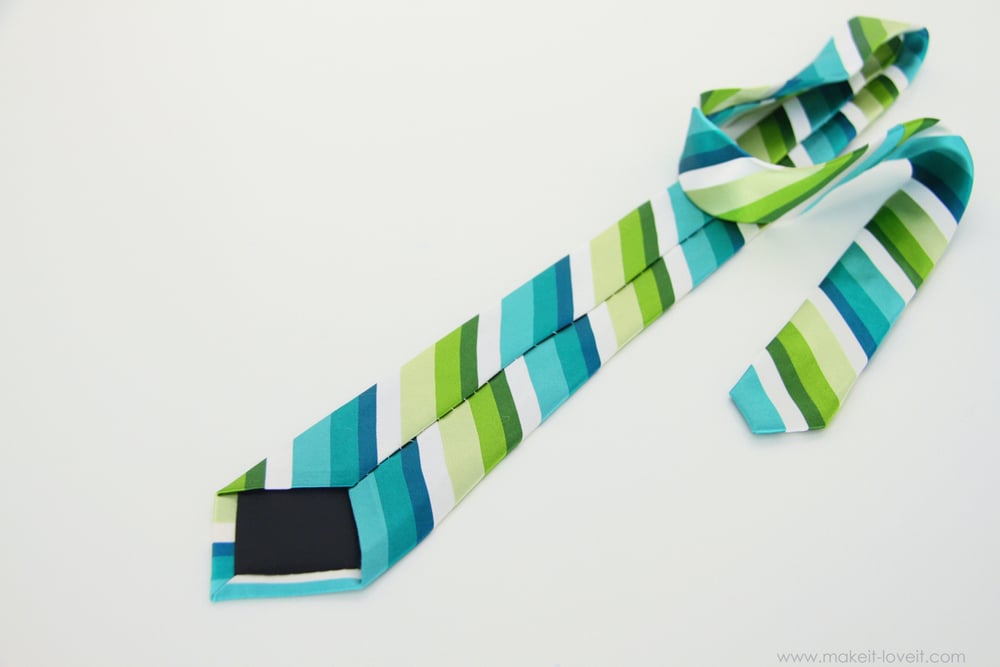 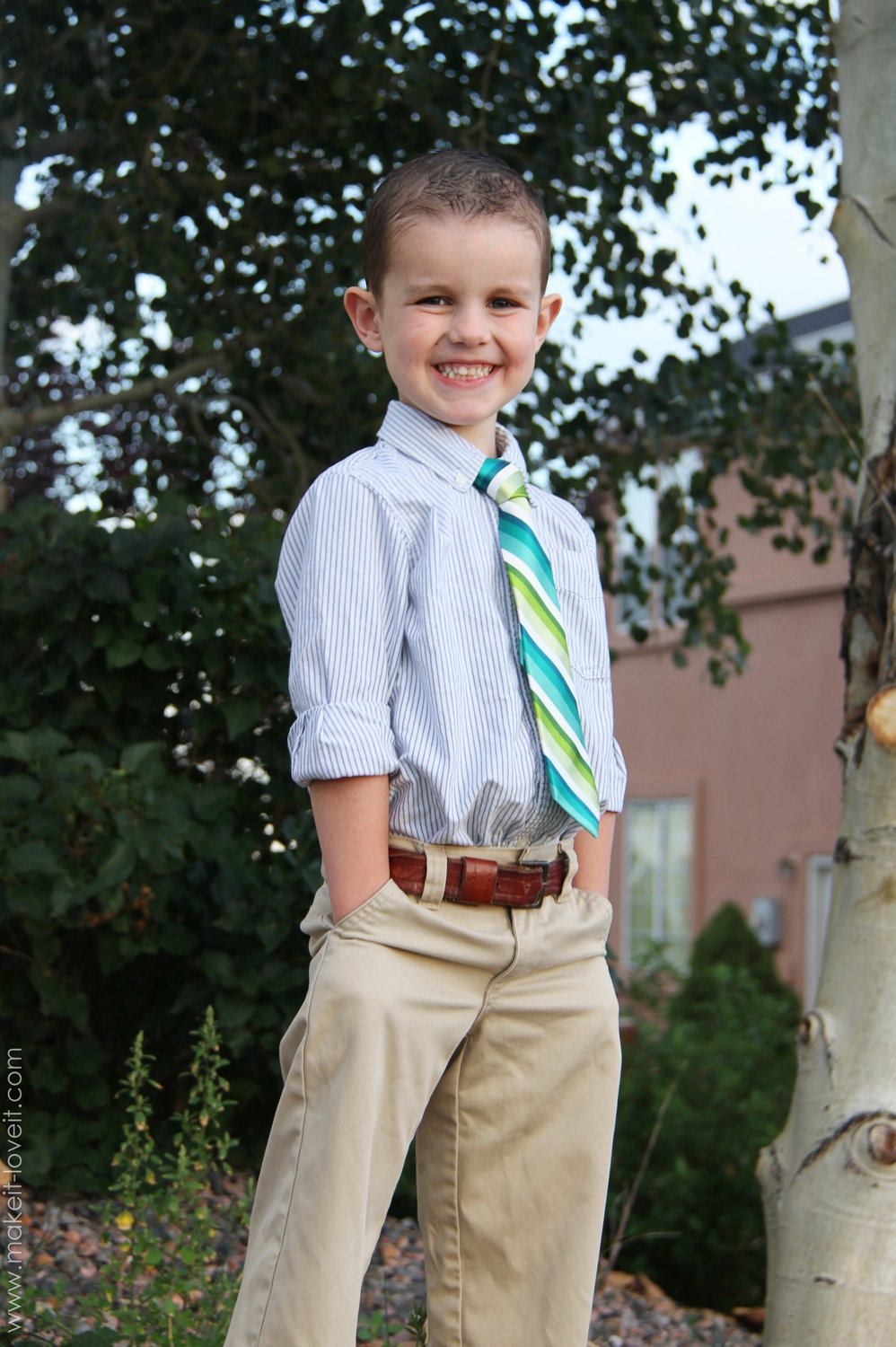 I have always made the majority of Connor’s ties (using the Little Guy Tie Pattern) and have always used cotton fabric.  So, once he put this tie on, he couldn’t get past how sooooooft it was!  He kept petting the poor thing.  (Yeah, big difference in texture…) 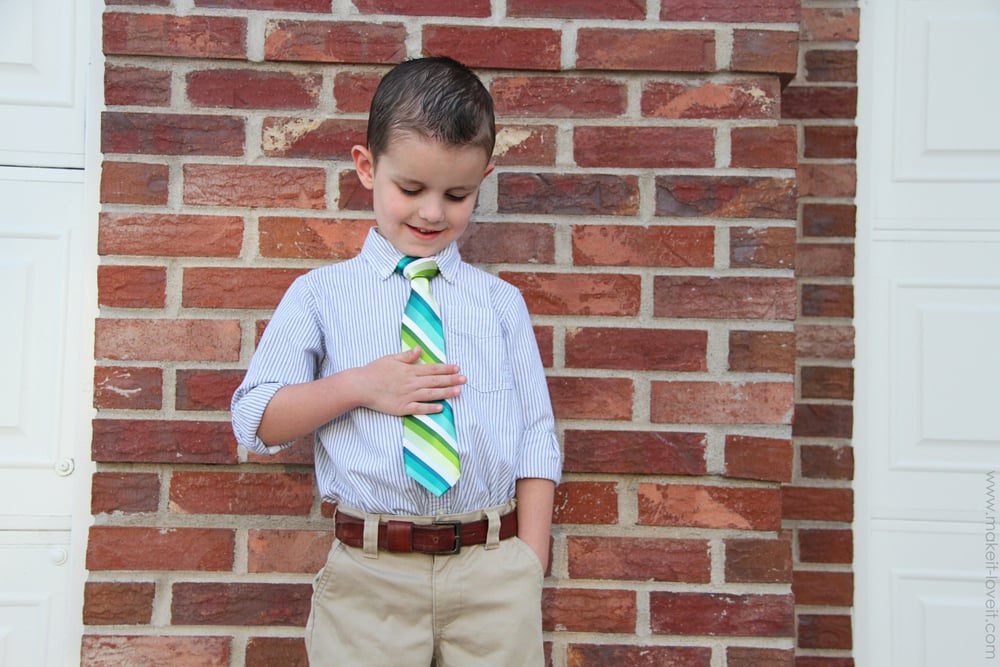 And because this is a real TIED type of tie, I had a little tie-tying to learn.  Because Steve’s not always around when I’m getting Connor dressed in a shirt and tie.  I already knew how to do that simple single-knot thing…….but that double-windsor knot has always tripped me up.  I’m pretty sure if I would have allowed my son’s face show up on this here blog, with a single knot tied tie around his neck, my husband would have just died.  Remember his whole thing with ties??  Well, it’s not just the texture and print that he’s particular about……it’s also the knot.  The tie below on the left = bad.  The one on the right = well, almost good.  It doesn’t have a “dimple”……..but that conversation is for a whole other day.  (Please tell me someone else’s husband/father/boyfriend is this particular about their ties. We need a support group.)

But, I looked on youtube and figured out the Double Windsor while Steve was at work yesterday.  Whew!

Now, Connor has his little Double-Windsor tied tie in place………….so that he can do what little boy’s do best while wearing a tie. ;)

Now, go and ask the men you know if you can give their old ties some new life (or head to the thrift store…..they have tons there).  And then snip them open, re-size them a bit, stitch closed, and then place on a little guy you know. 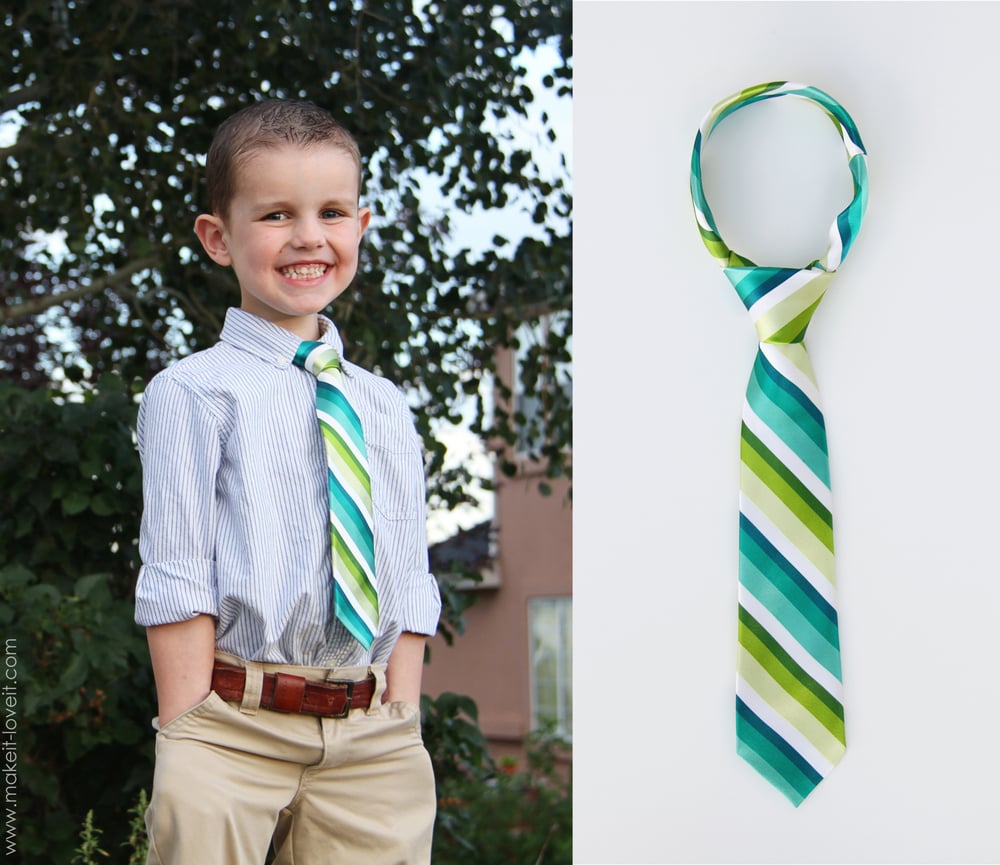 Seeing a little boy in a tie……….makes me smile.  Every. Single. Time. 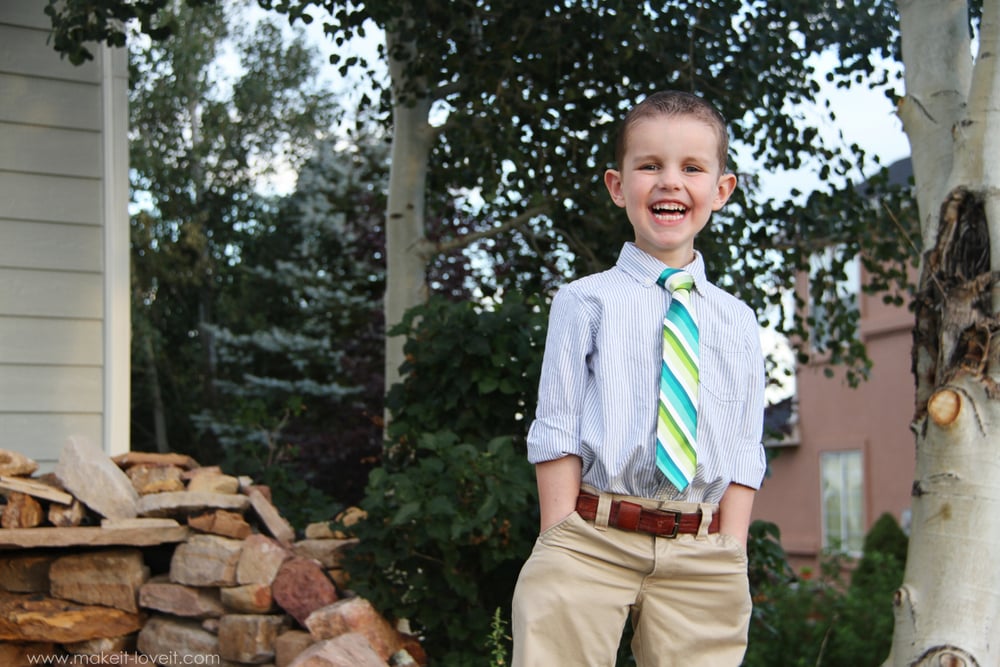 Would you like to re-size a men’s tie into a smaller boy’s tie too?

First of all, Connor is 5 and wears a 5-6 in little boy sizes.  The measurements I used were specifically for him.  Adjust accordingly.

Steve’s old tie was too long and too wide at the bigger end.  So first, I shortened the length of the tie.  I decided that I wanted a finished tie of 45 inches.  So, I cut off some of the length in the middle and kept the two ends that were already finished, so that I didn’t have to do any many re-constructing.  But I also added a 1/2 inch to each side, for a seam allowance.  **Just be sure that these two cut ends are the same width, making re-attaching them easier.** 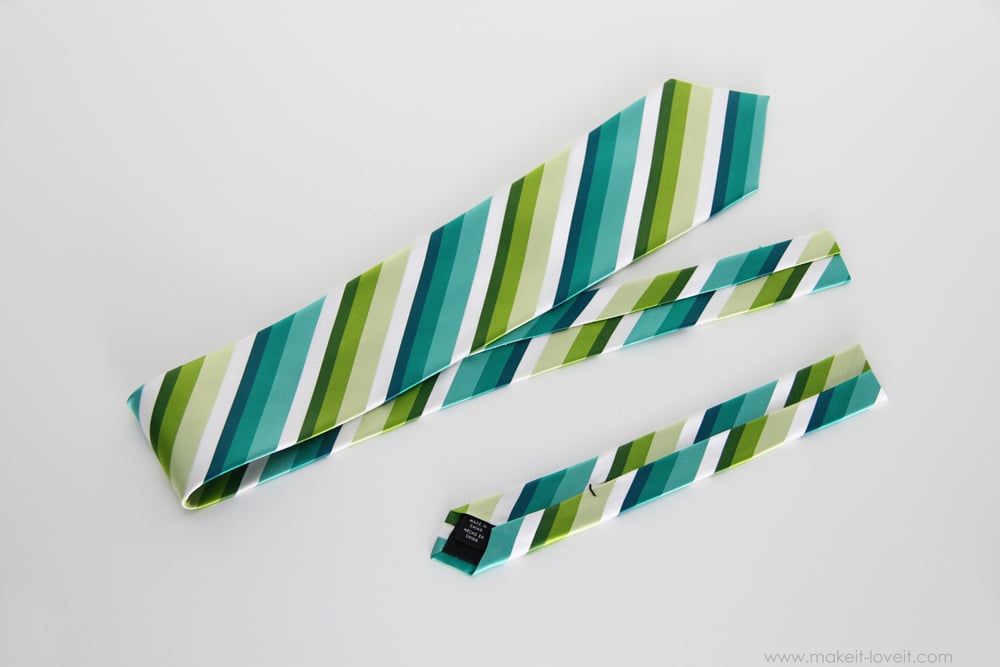 Then, snip open the back side of the two cut ends. 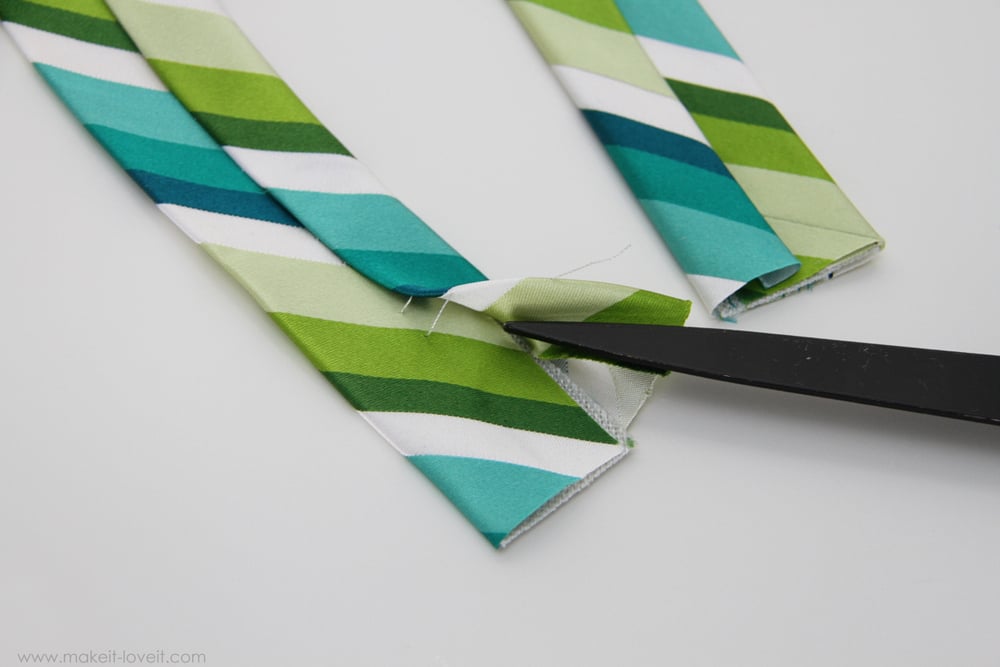 And then fold back the lining piece that’s inside and pin it out of the way. 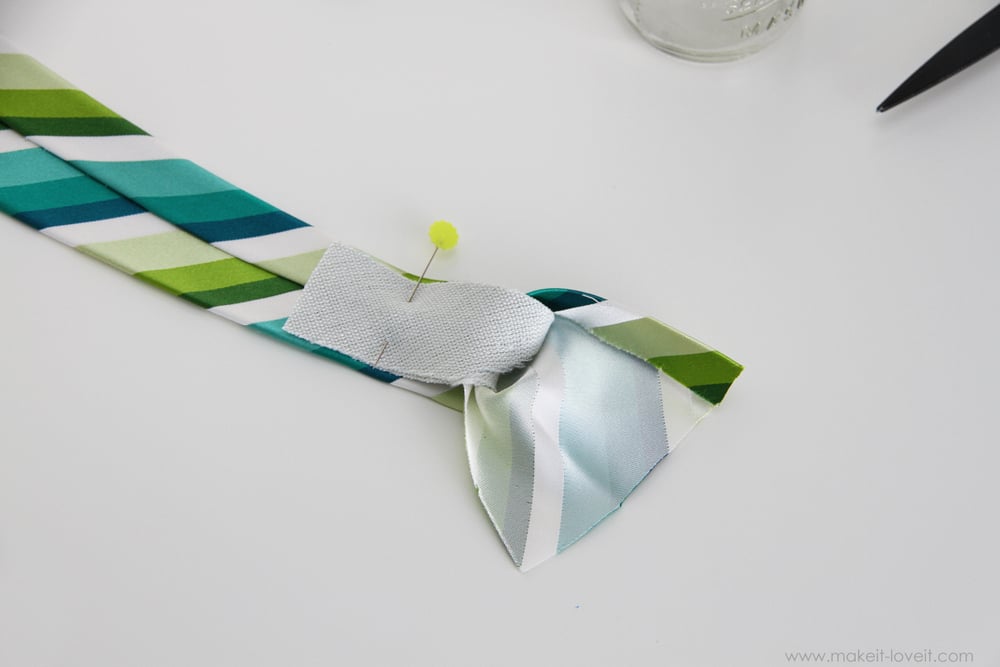 Do the same with both cut ends.  Then, open up both ends and place them together with right sides together.  Look for the folds of the tie that were from the actual sides of the finished tie. 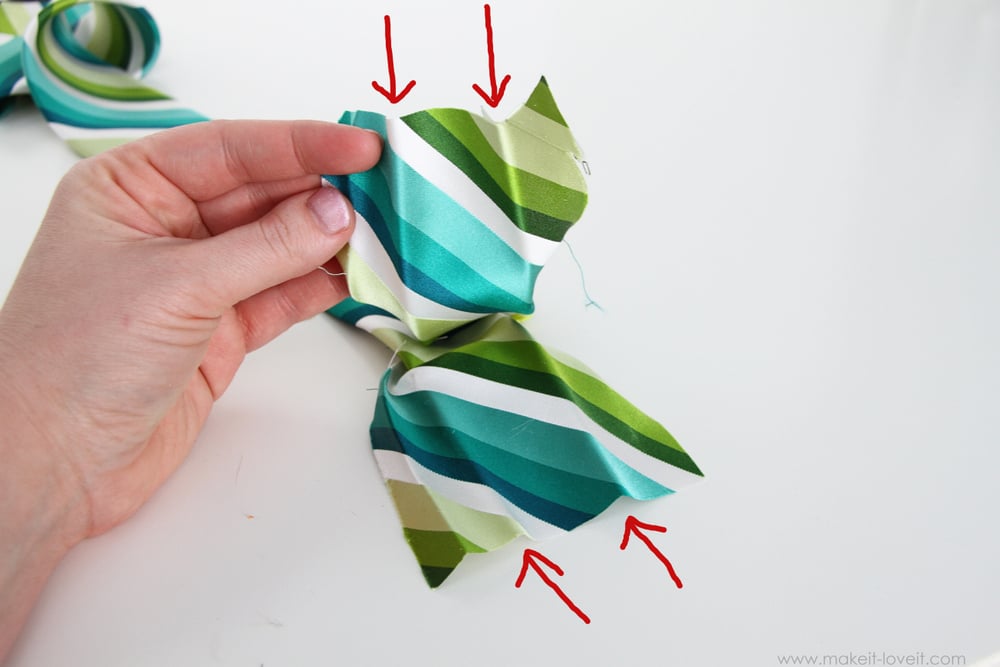 Match up those folds and pin them together. 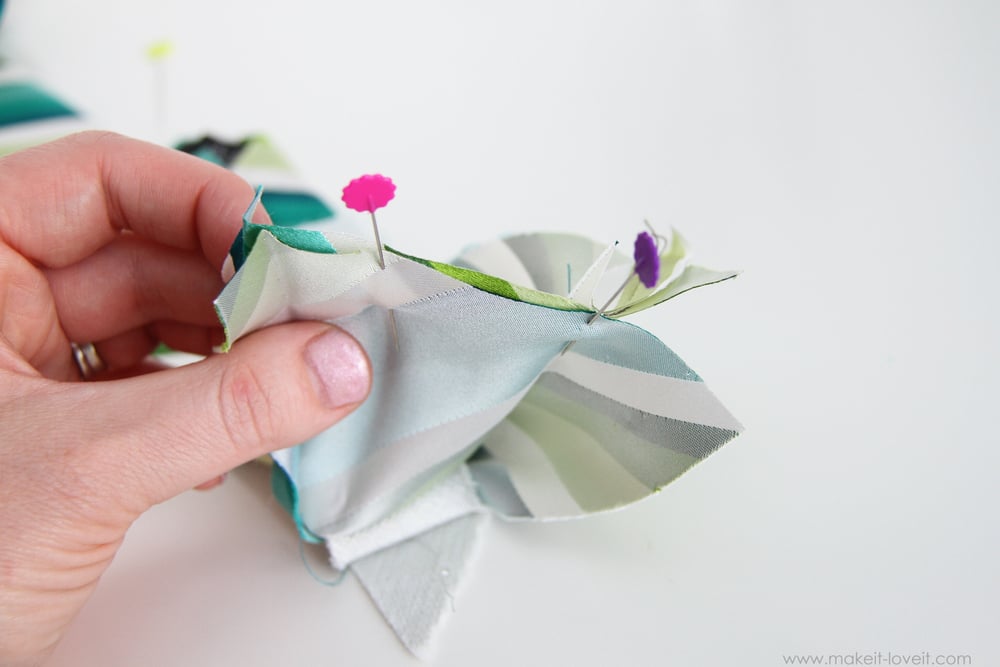 Then pin the rest of the top edge together.  (The sides may not match up perfectly, but that’s okay.  As long as those folds match up, you’re good to go!) 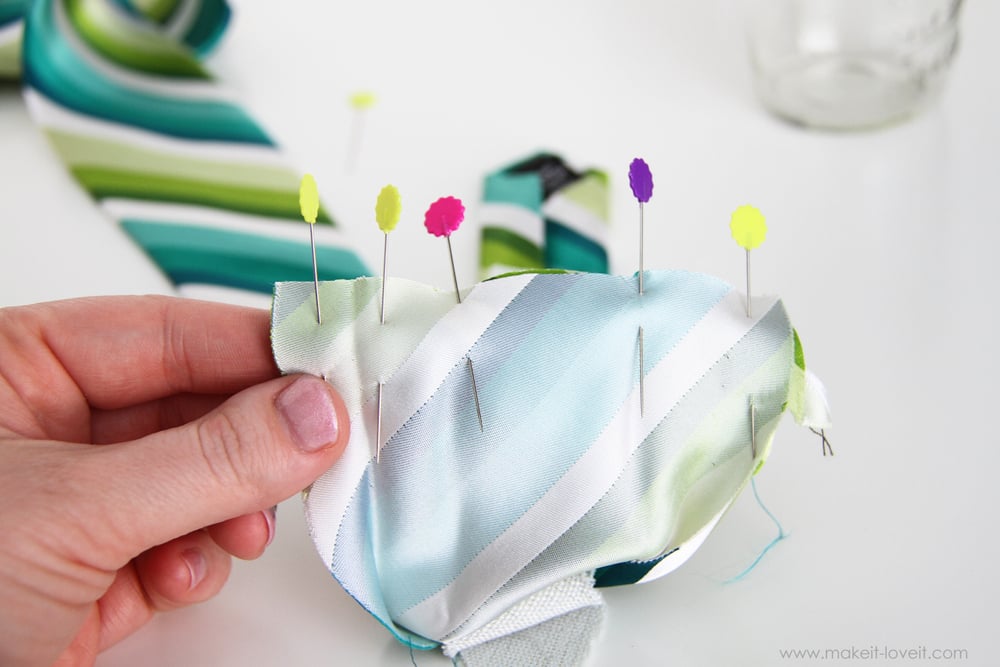 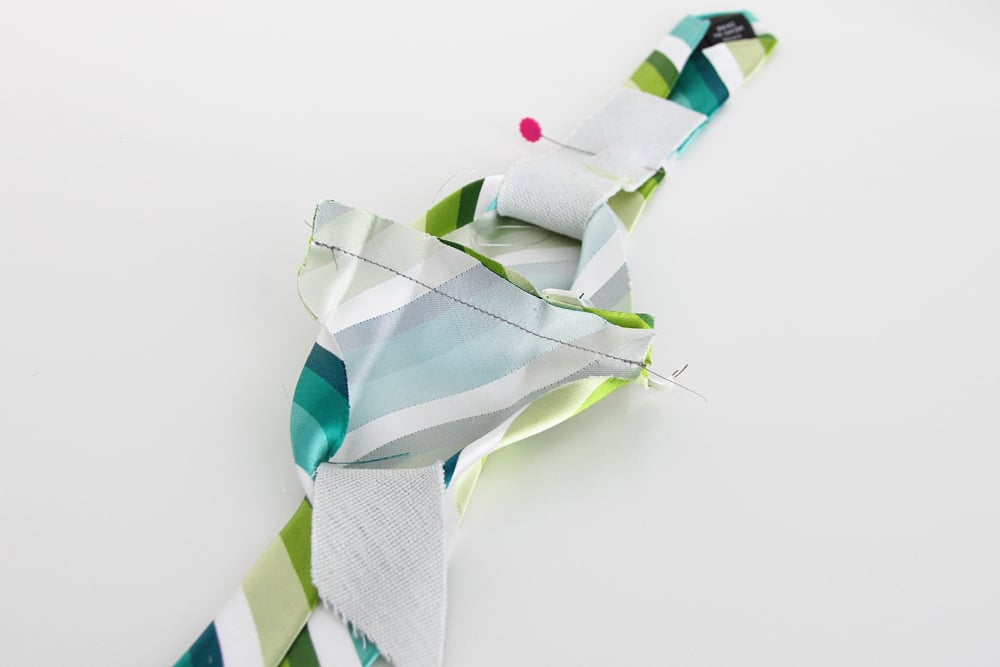 Then, using an iron AT A LOWER TEMP, press open this seam. 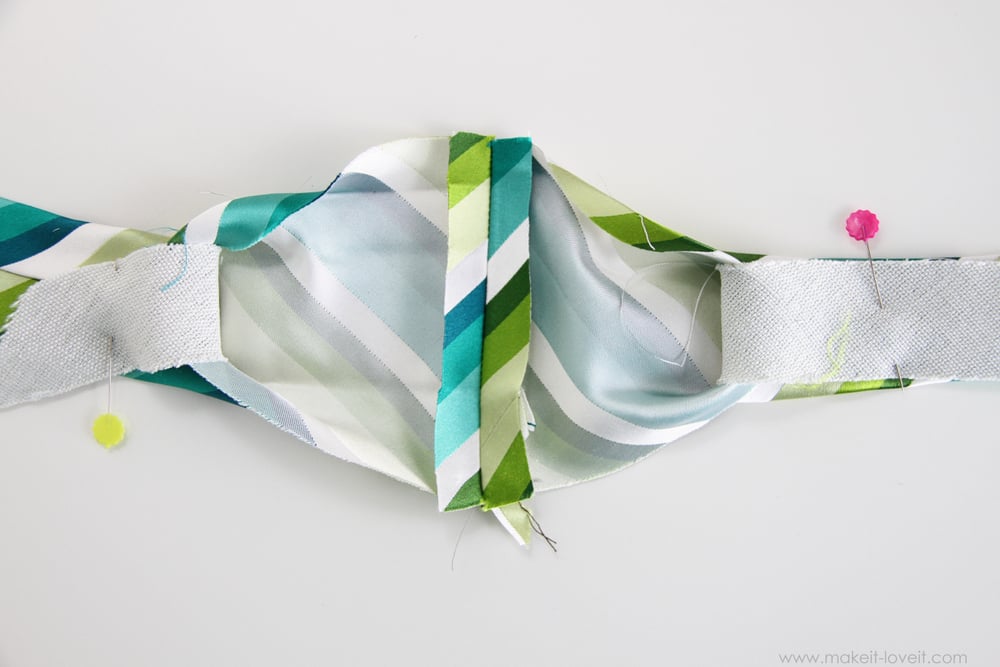 Then, lay the lining pieces back down in place, cutting off any excess.  (But leave enough so that the two sides overlap a bit.) 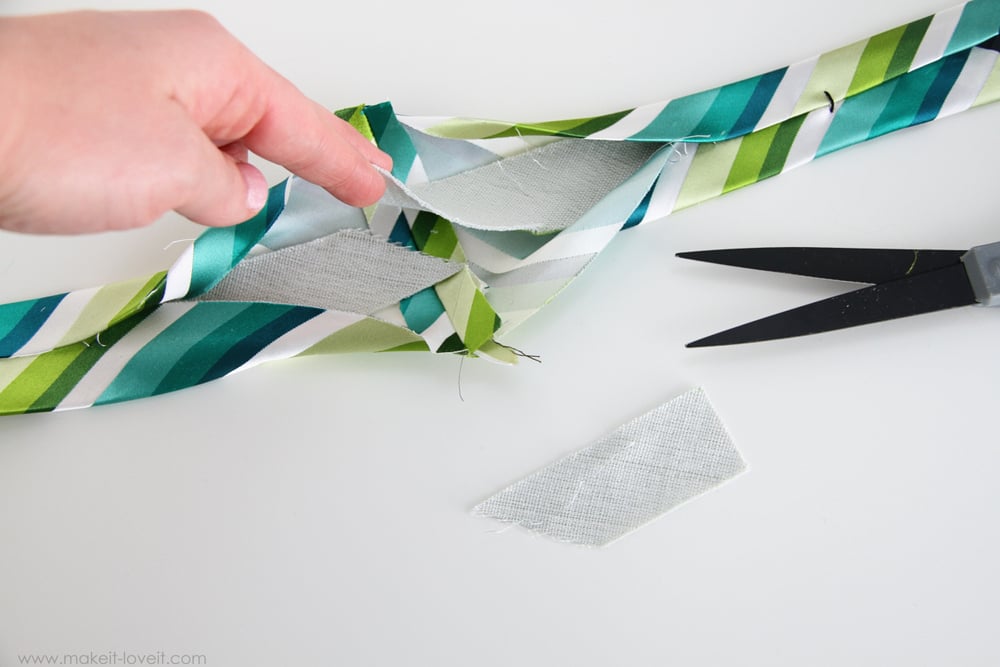 Then, fold over the side that didn’t have any extra fold. 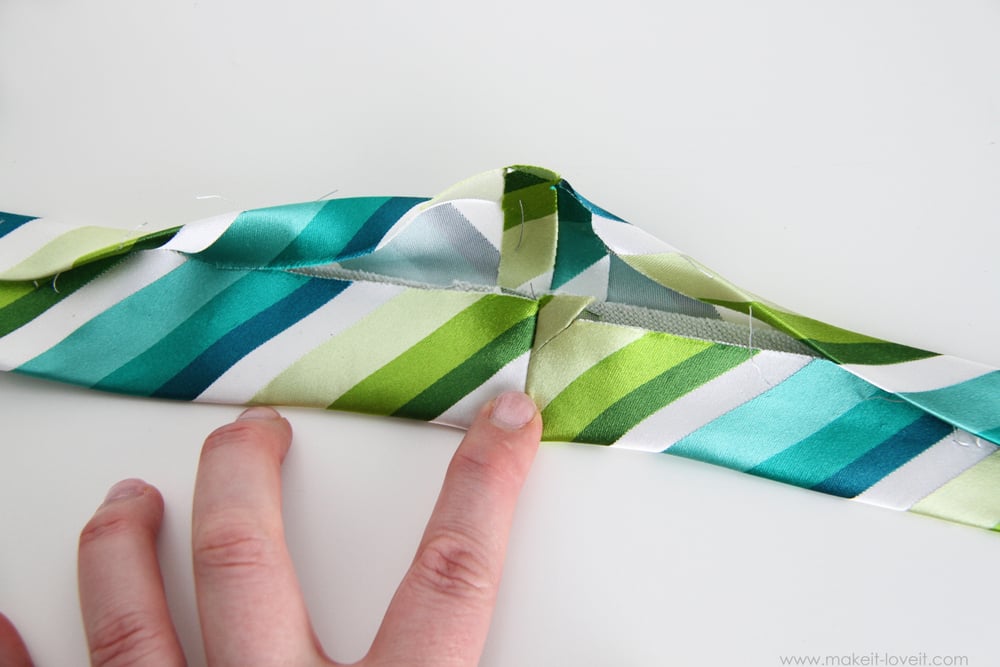 And then fold under the extra fold of the other side (just like it was previously) and then fold it over on top of the first side to close up the tie. 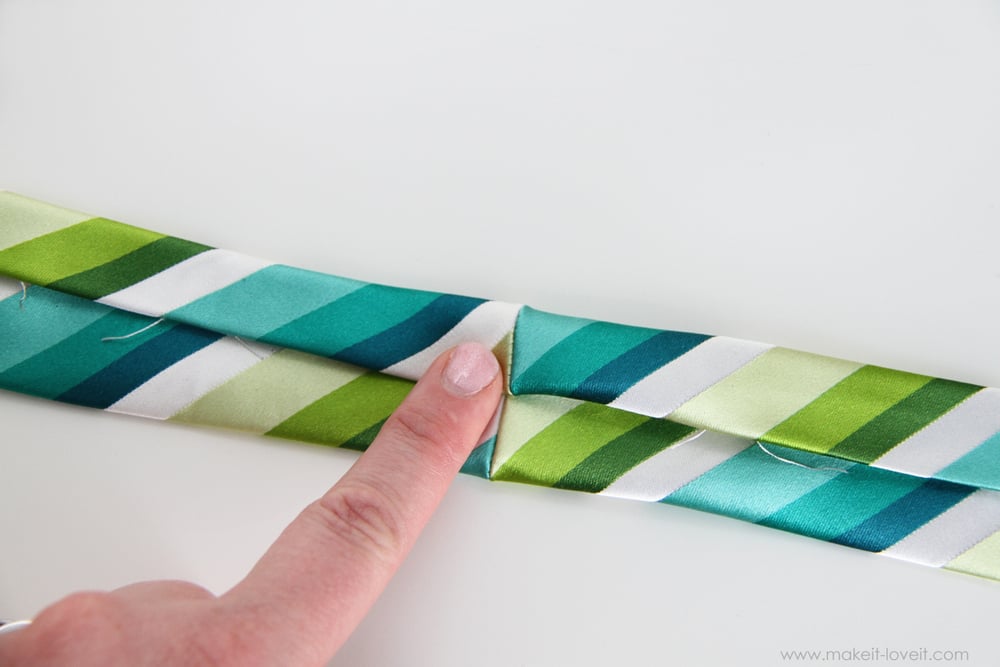 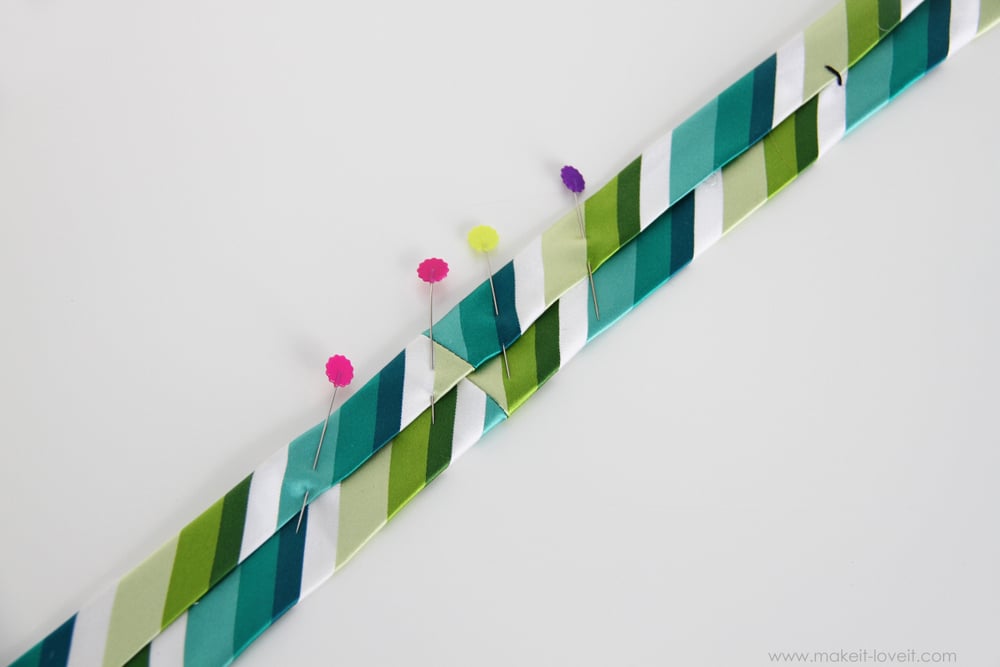 Now, you can leave the tie nice and fat…..or slim it down.  To do so, trim open the back of the tie and then get the lining out of any casing that it may be resting in. 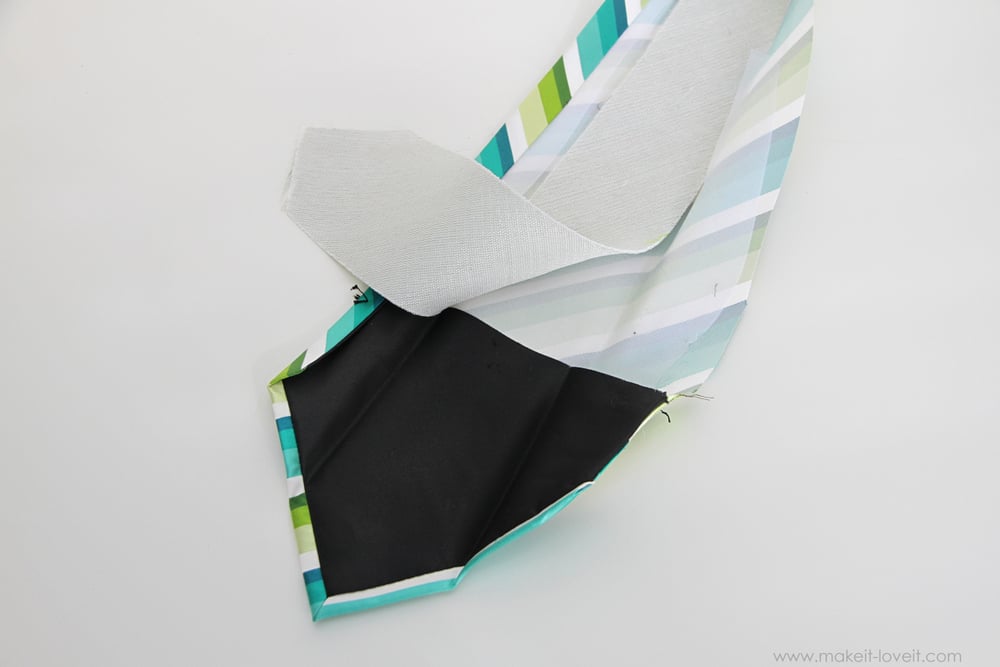 Then, lay it back down flat and trim in the sides just a bit.  (I took about a half inch off both sides.)  But as you cut higher and higher, you gradually lessen the amount you’re cutting off and then taper off to nothing.  I tapered off about half way up the tie. 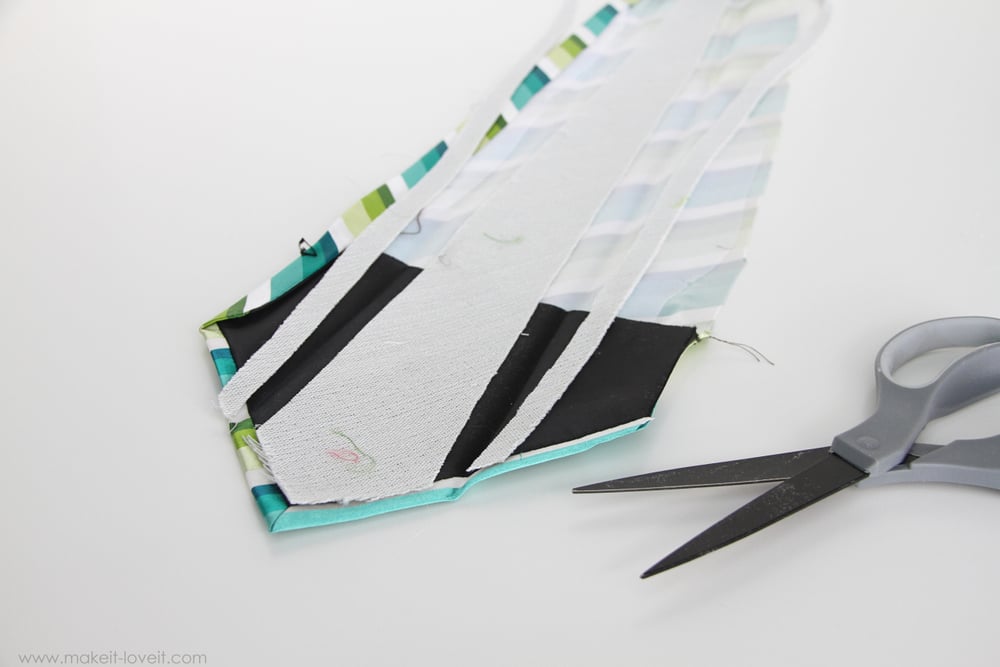 Then, do the same thing to the actual fabric of the tie. 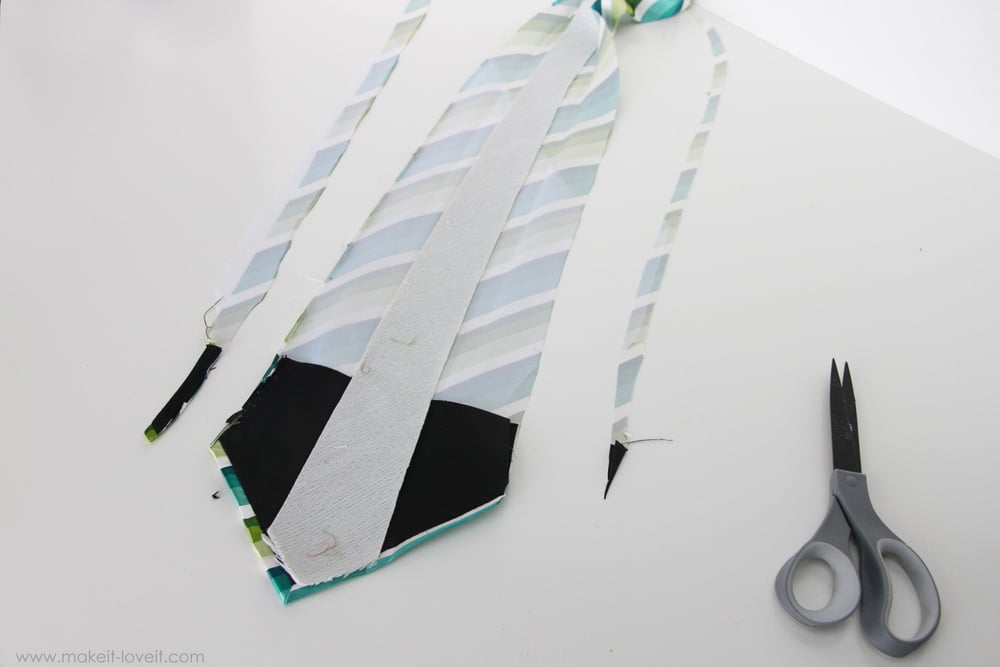 Now, it’s time to make some new folds.  Use an iron (at a low temp) and iron the first side up, right next to the edge of the lining that’s down below. 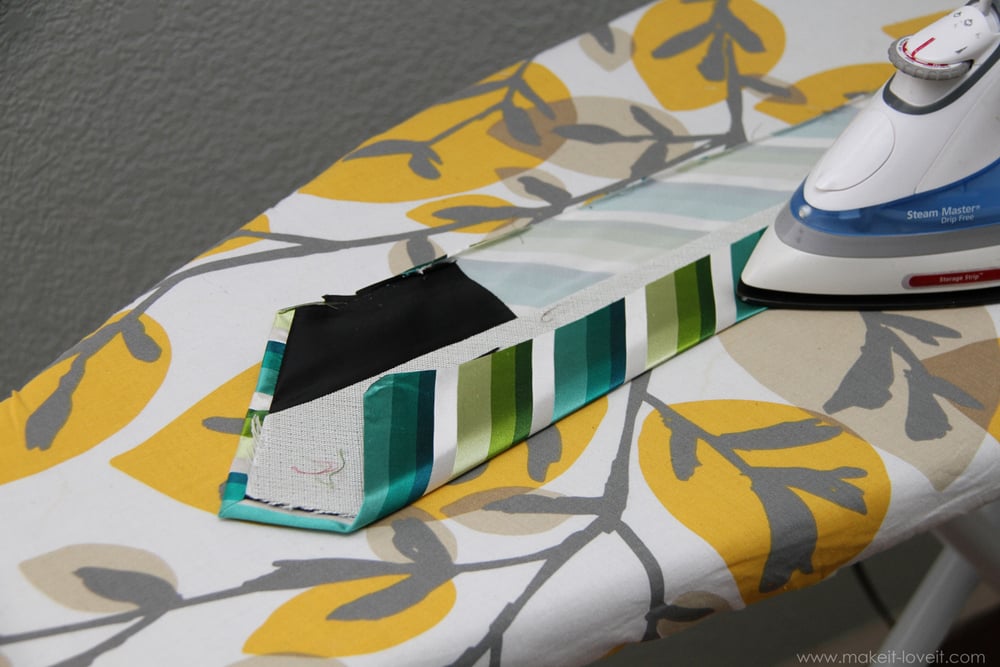 With the other side, fold over the top edge about a 1/2 inch and iron flat.  Then, fold the whole side down and sandwich the tie closed. 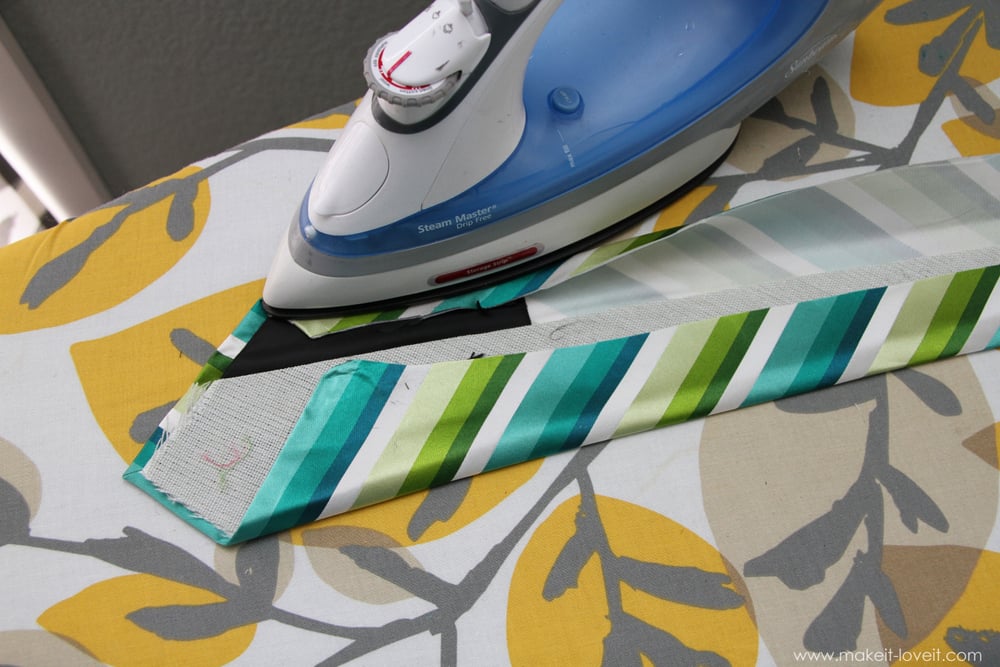 Then, open it back up and slip the lining back into the casing.  (I just kept it out while ironing, so I could see where it was to fold around it.) 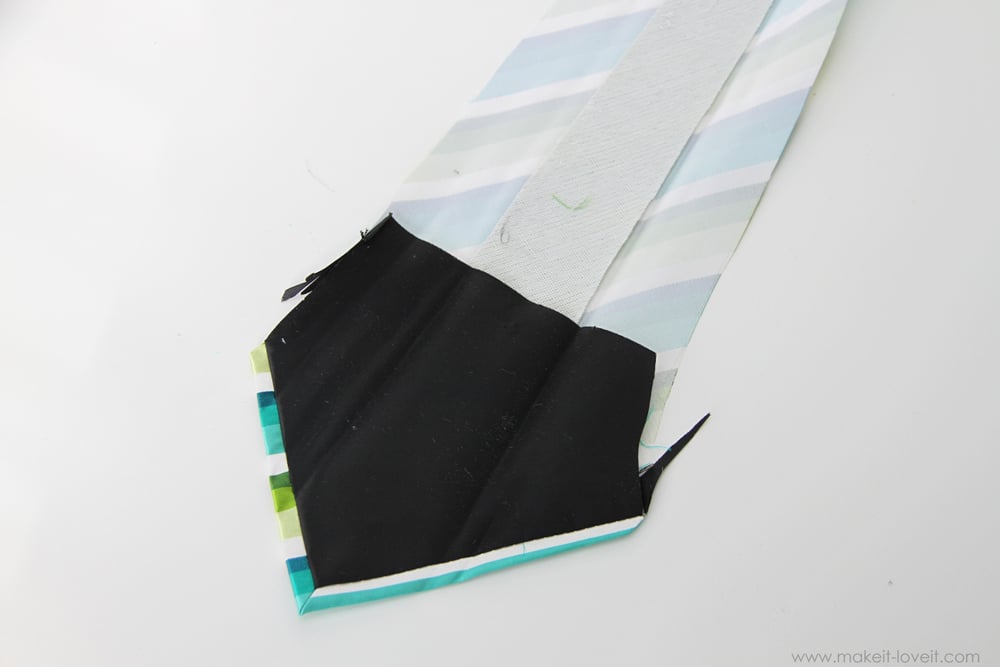 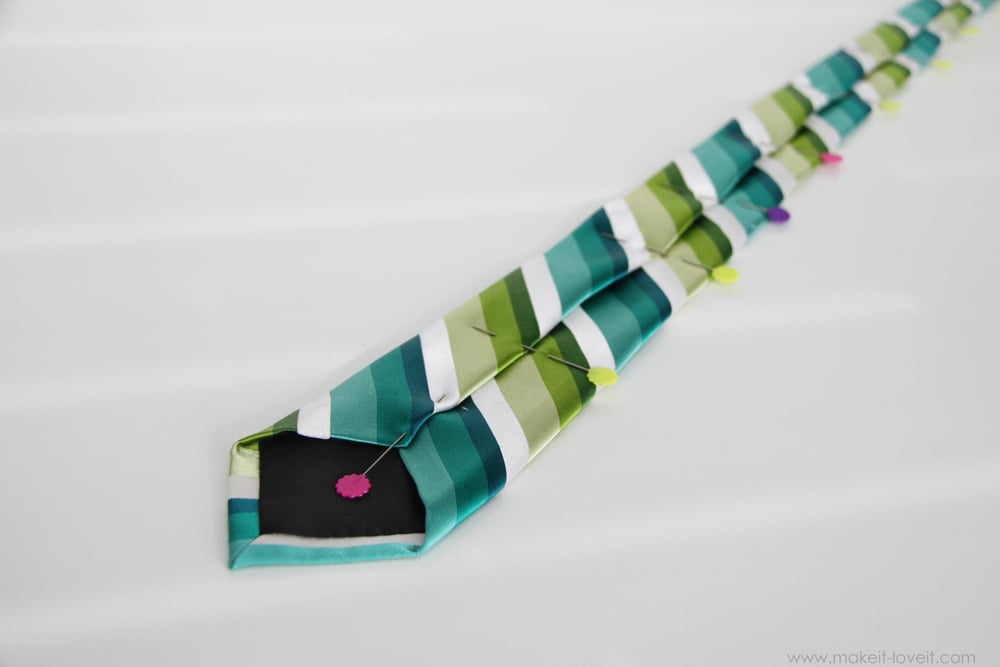 And then hand stitch it closed, using a simple hidden (or ladder) stitch.  You can take big stitches and it doesn’t have to be perfect.  (Need help with Hand Stitching??) 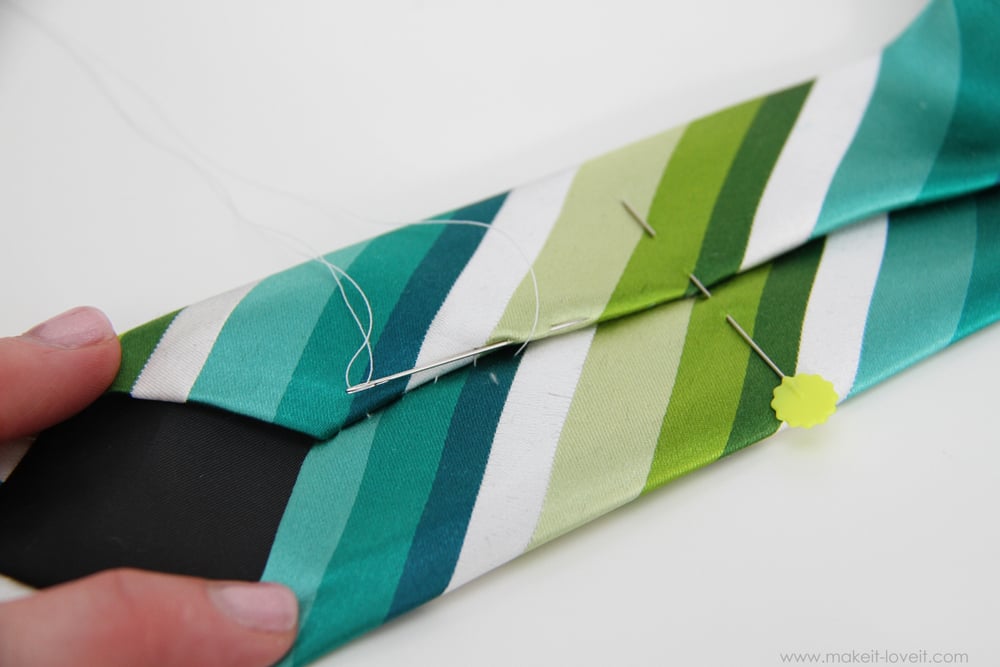 Then press everything again, creating new crisp edges……but don’t turn that iron up too high or you’ll melt your tie fabric. 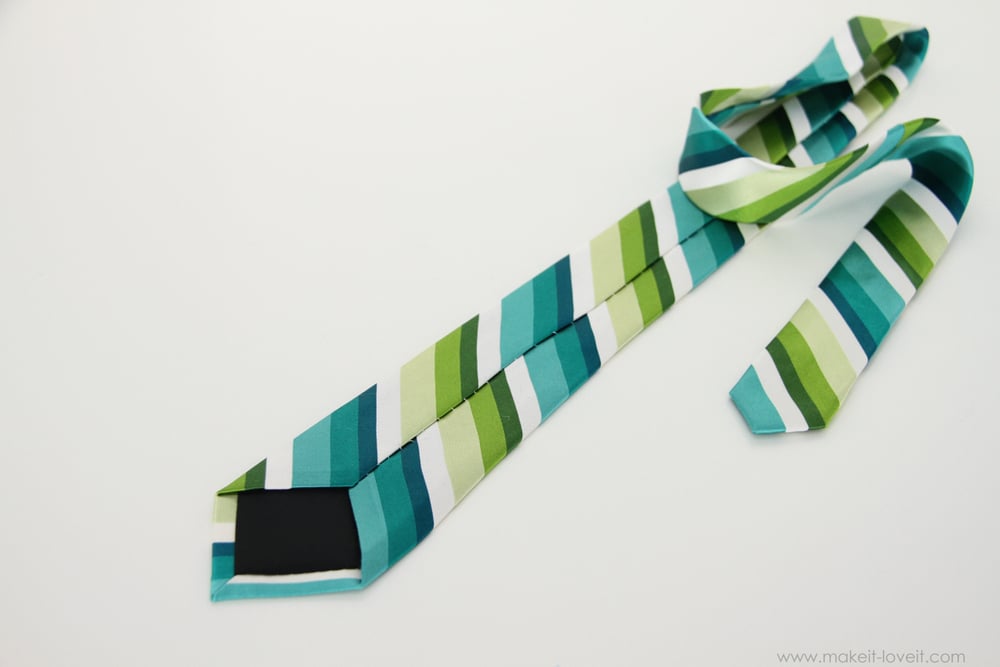 And then let your little guy enjoy!

Thanks for checking out my Re-purposing: Turn a Men’s Tie into a Boy’s Tie post. Check out my full collection of DIY Sewing articles. Find even more sewing projects, patterns, and tips for beginners and advanced sewists by Liz Call, Mariah Leeson, Randi Dukes and Tauni Everett.