Hey guys, I’m over at U Create today……sharing a really simple and inexpensive ornament idea.  And by inexpensive, I mean, dirt cheap.  And by dirt cheap, I mean, run-outside-to-your-backyard-and-gather-some-dead-branches cheap.  The only thing that may cost you some money is a little wire but that won’t cost you more than like $2 for a whole roll of it.  But, maybe you already have some of that laying around?  You do?  See?……dirt cheap! :)  But even though it doesn’t cost much to make, it turned out to be my favorite thing hanging from our tree.

These ornaments would be really fun one to make while your Thanksgiving guests are here for the weekend.  So while the turkey is roasting in the oven, run outside and gather some sticks or broken branches from your yard, grab a little wire for the simple message, and get ready to put together some stunning little ornaments for your tree. :)

Each of the ornaments were glued together into Christmas shapes (with a support in the back). And I have to say, those little twigs give these ornaments such a simple and earthy vibe. I kinda love them! 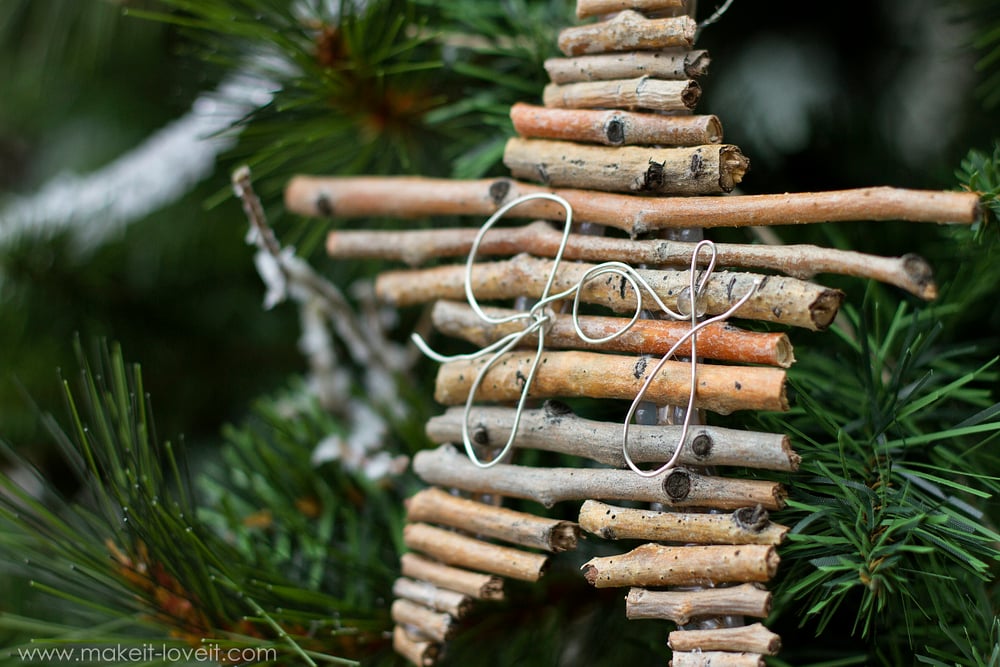 The wire words are super simple to make and only require small amounts of wire…..but are my favorite part of the ornaments. The messages are subtle but are great reminders of the true spirit of Christmas! 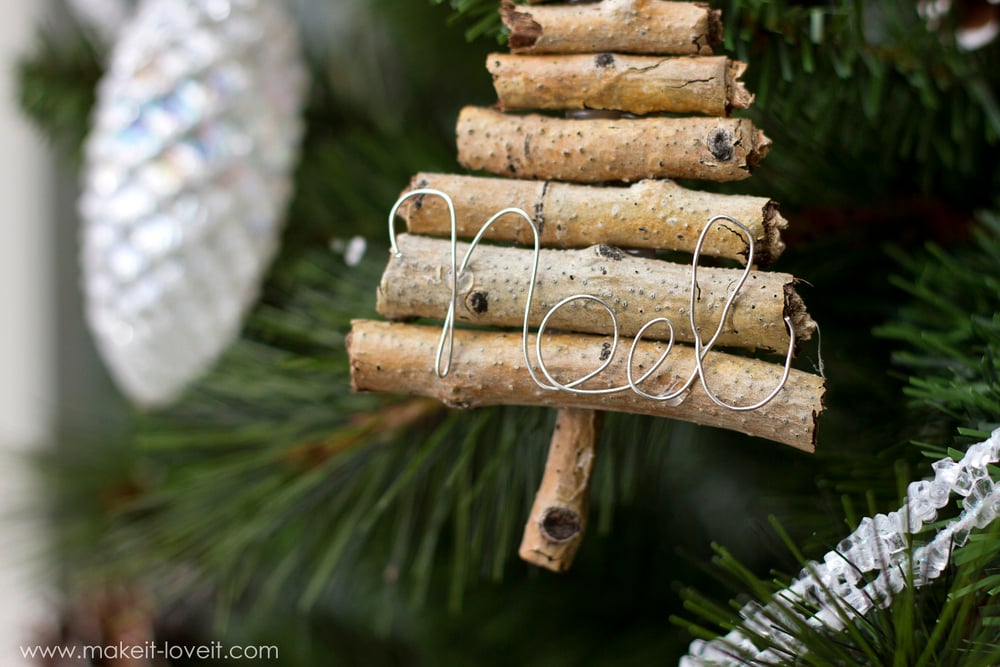 These ornaments are such a fun decoration for your own tree, but would also be really cute attached to the top of a gift. Or hey, create a whole set and gift them to a neighbor…..I can’t think of a better way to spread love this time of year. 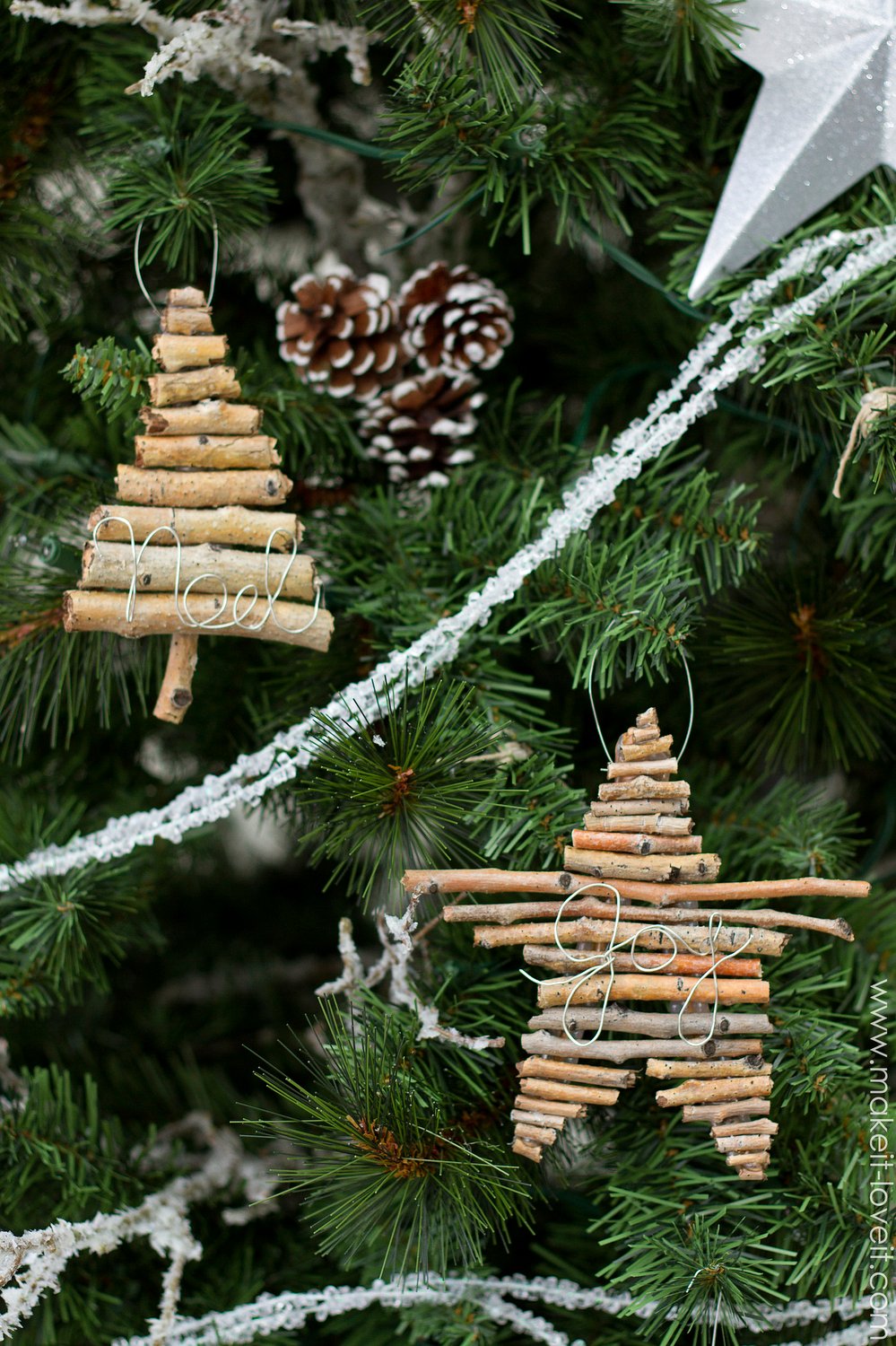 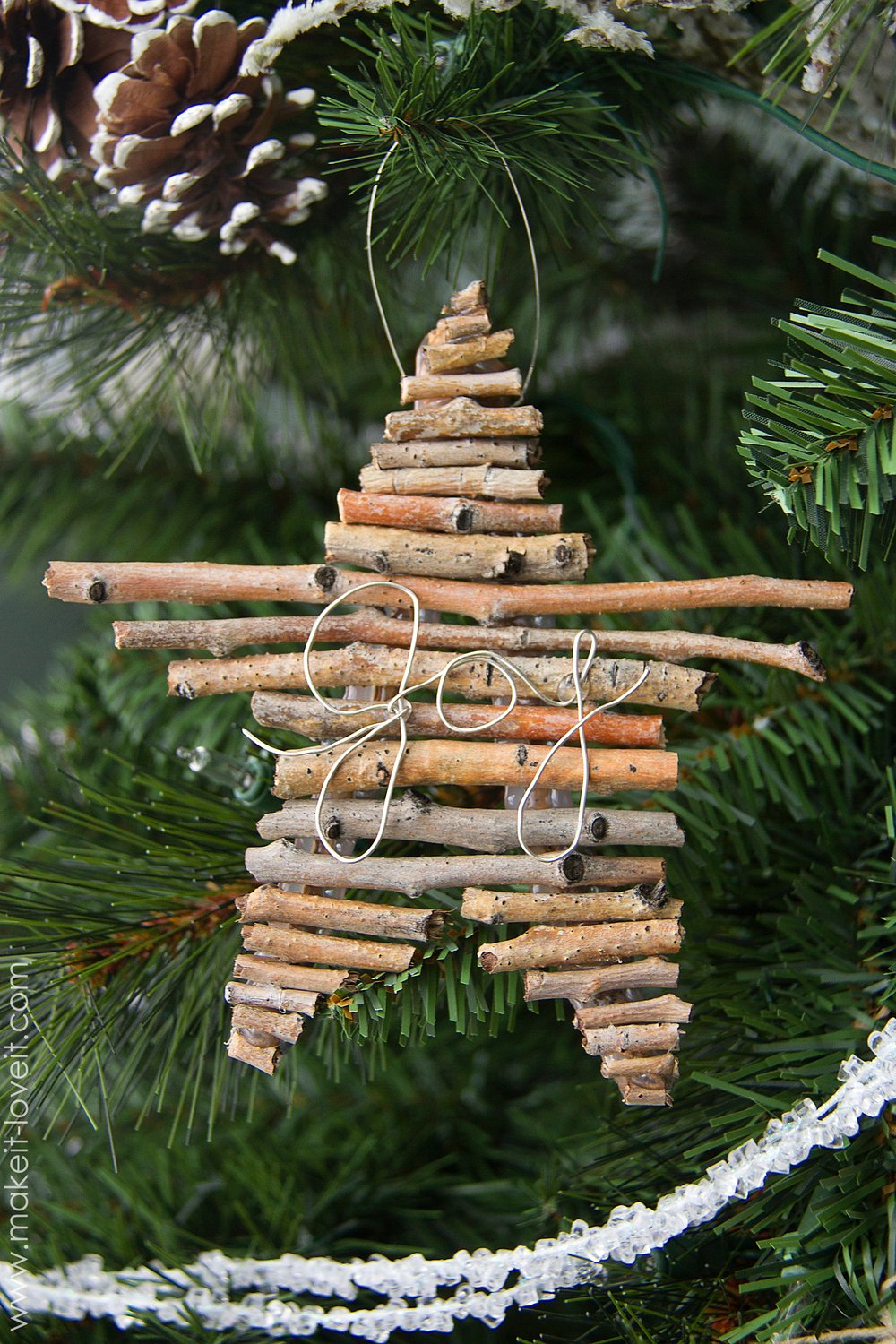 Okay, enough chatting…..here’s how to put your ornaments together.

Begin by printing out your desired shape from your printer (or drawing your own shape by hand). Then cut twigs down to size to fill in your shape. 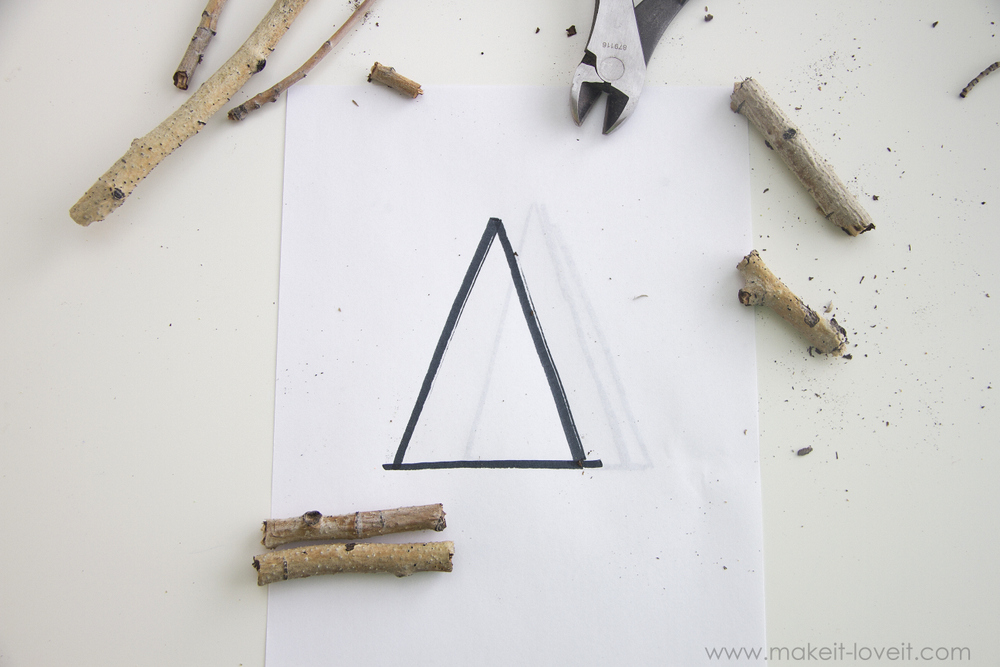 Then, stack your twigs (using straight pieces makes this easier), until you’ve reached the very top of your shape. 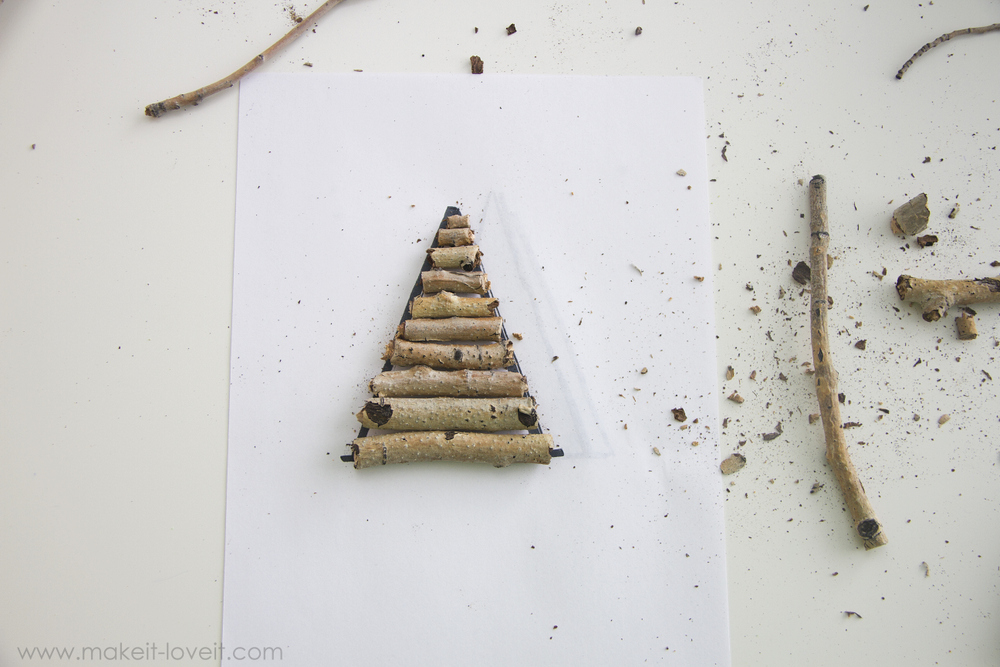 Then, hot glue a straight stick along the center of all the sticks, gluing them together and in place. (Use plenty of glue and turn up your glue gun to the higher heat setting so that you get a better bond.) Now, for this tree, I let the center stick hang down below the tree shape and used it as the “trunk” of the tree. But if you don’t want it to show, be sure and cut it down to size before gluing in place. 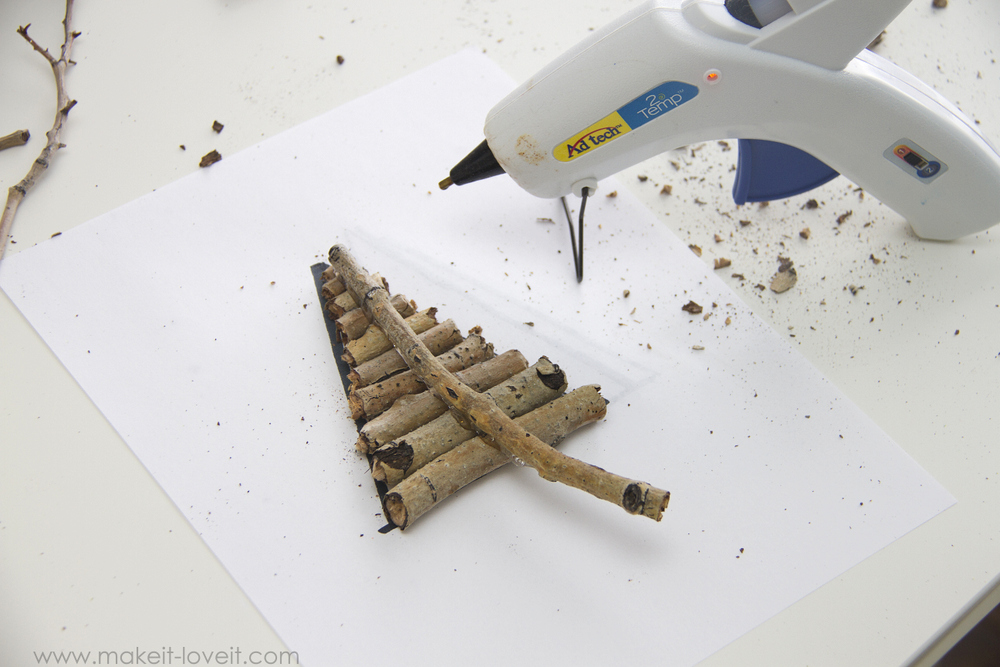 Be sure all of the sticks are firmly attached to the support stick and then run another line of glue along both sides of the support stick. And remember, the hotter the glue, the better the bond while using sticks. (Cooler glue temps tend to result in the sticks popping off once it’s cool…..and really hot glue helps keep this from happening.) 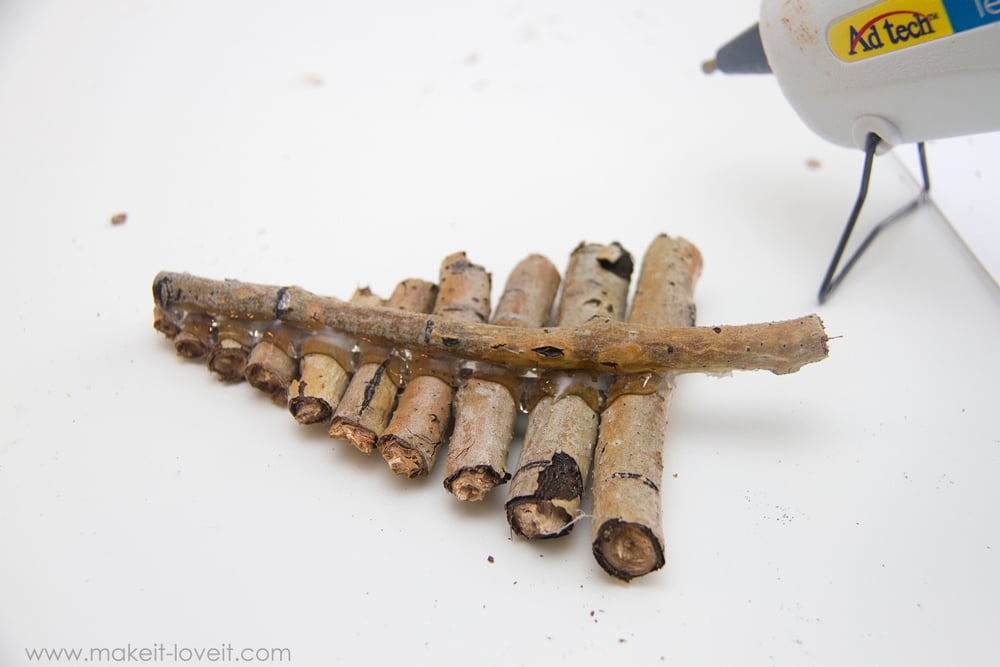 Now, create whatever word or message you’d like to attach to the front of your ornament. (If you’re struggling with free-handing your cursive letters, try printing out your word in the font you’d like and using that to trace as you’re forming your word.) 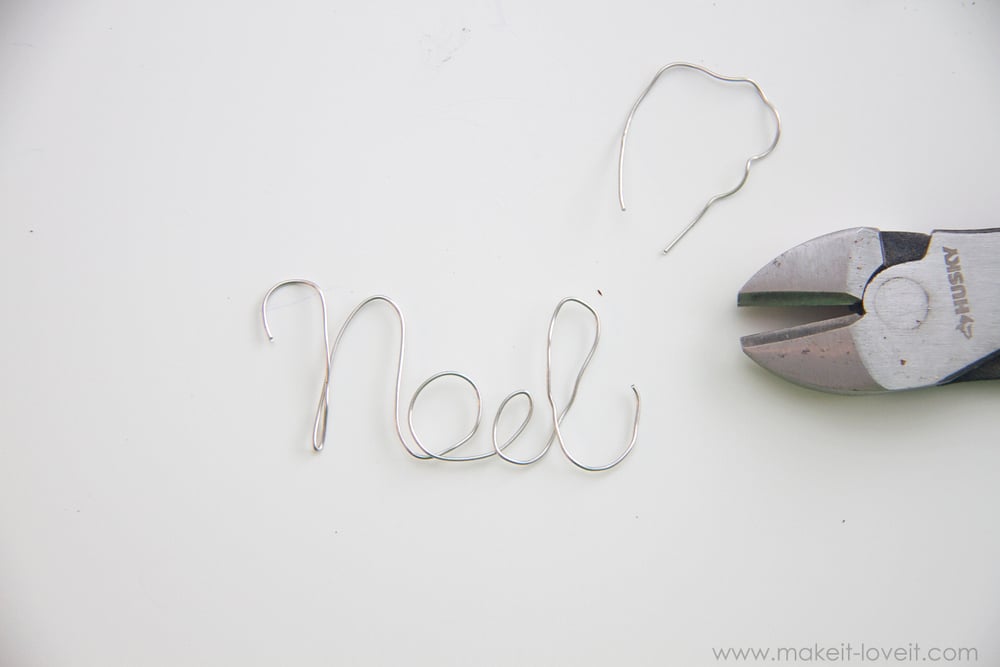 Attach your word to the front of your ornament with small dots of glue. (If you don’t mess with the glue, it will stay clear. If you mess with it a lot and find yourself moving the word a lot after you’ve placed it in the glue, the glue tends to look more white. If that happens, pull it off, pick off the glue, and try again.) 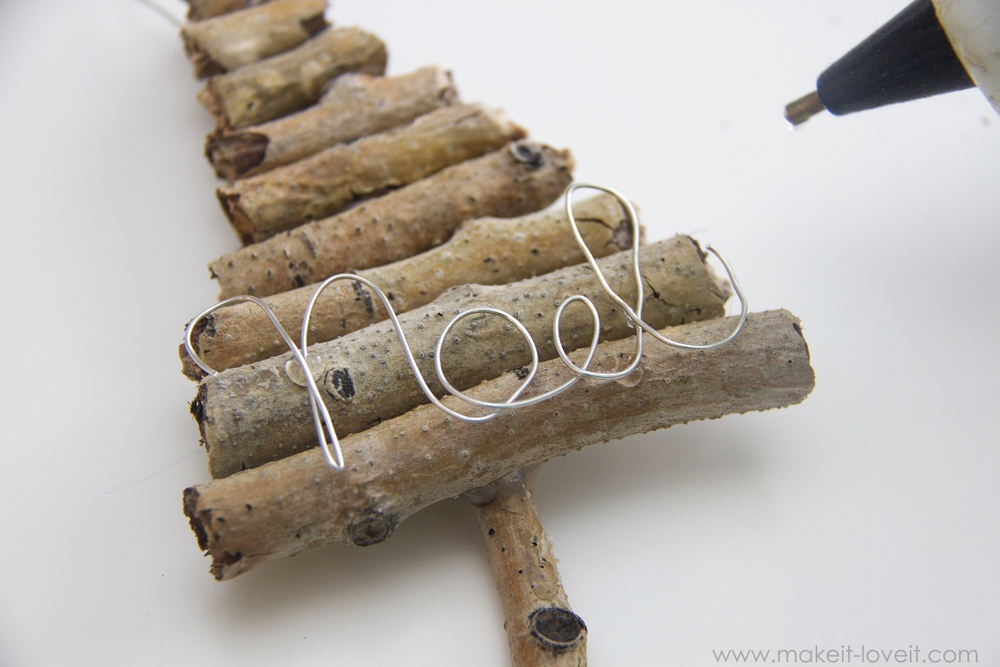 Now, I used a smaller gauge wire for the loop at the top of the ornament but that’s because I ran out of the thicker wire. However, I ended up liking the thinner wire better, so that it’s less visible. Just bend a few inches of the wire into a circle and wrap the ends around each other. 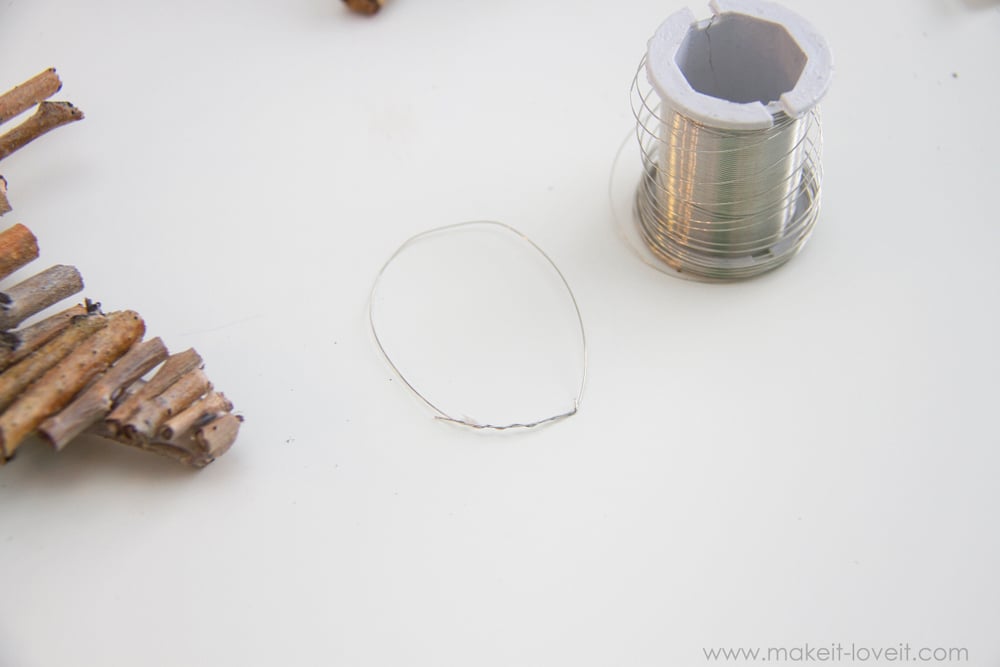 Then bend it around the back support of the ornament (or wherever else makes a good spot to attach it) and then add a generous amount of glue to keep it in place. 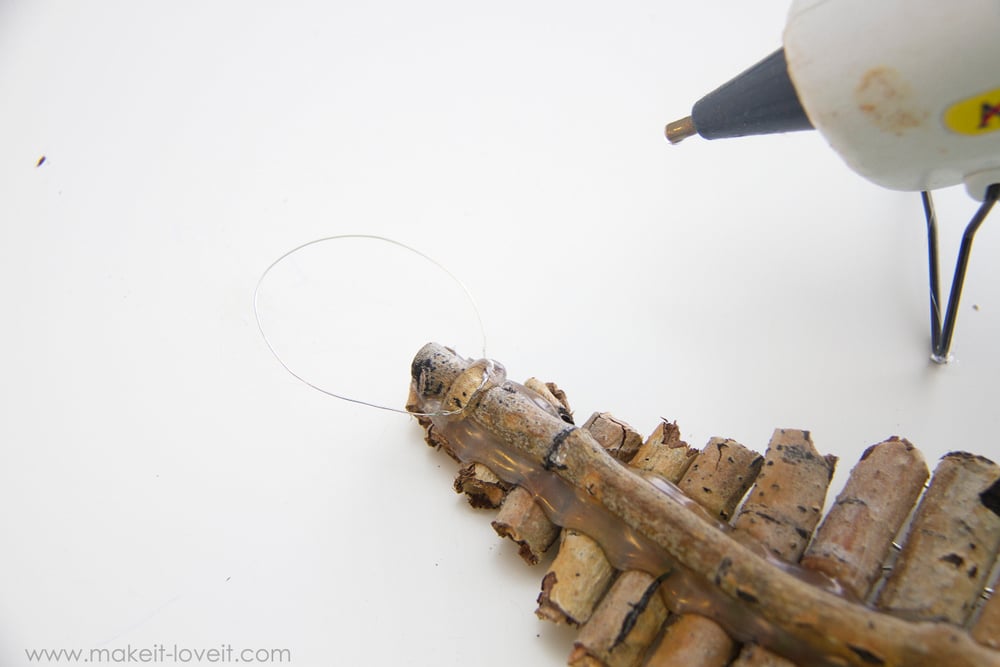 For the star, I followed the same steps. But for each point of the star, I starting using thinner and thinner branches….because that helped define the shape a little better. 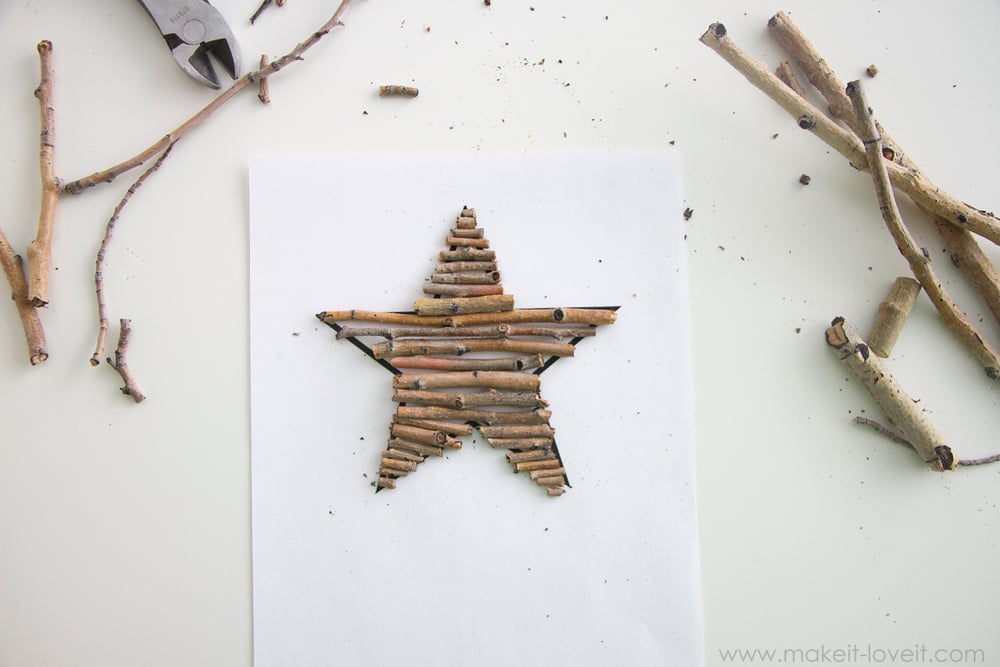 I attached 2 sticks along the back. One along the right side and the other along the left side (not shown). 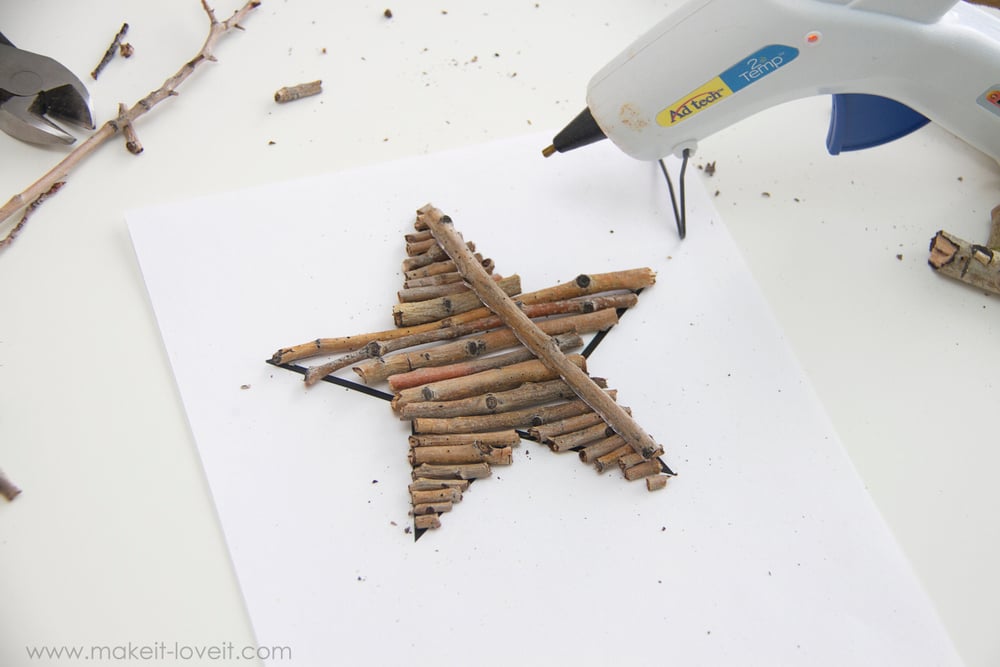 And because there were so many little sticks for the star that were all different thicknesses, I flipped it over and pressed all of the sticks firmly onto the support sticks on the back. 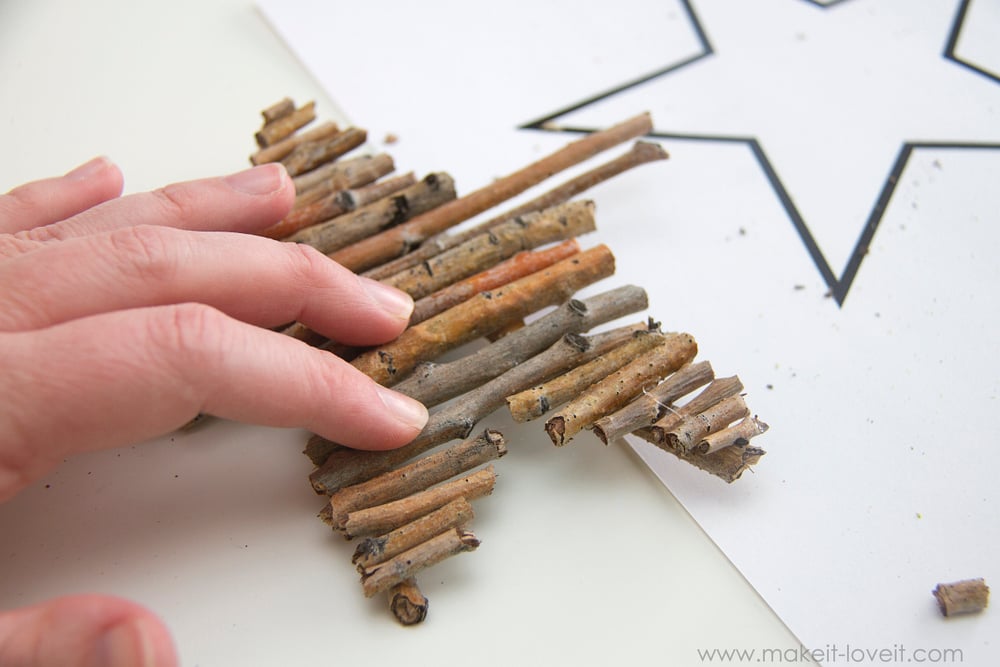 And because the very tiny twig pieces at the tips of the star were so small, I just glue them individually onto the star…..and didn’t worry about attaching them to the support stick along the back. 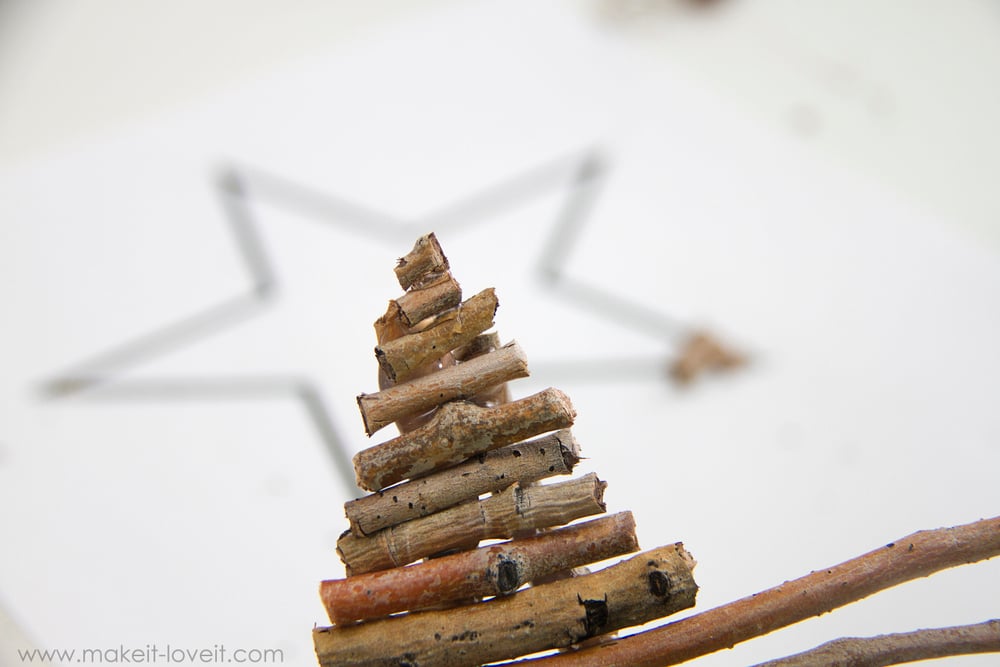 And here’s how my “joy” looks in cursive. I attached it the same way as the “noel” up above. 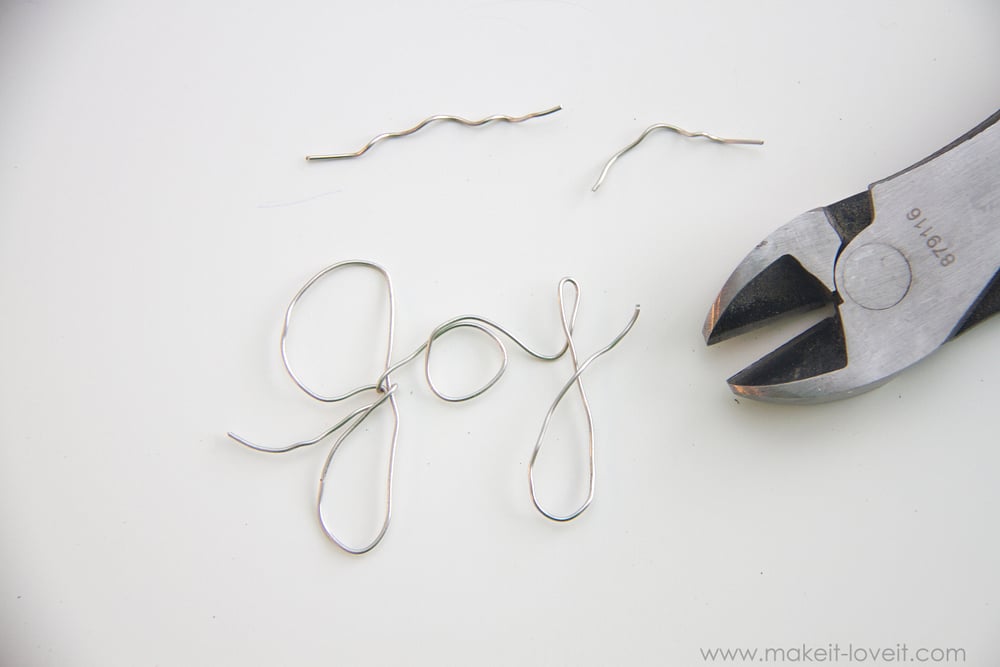 And that’s it…….new little ornaments to hang and enjoy! 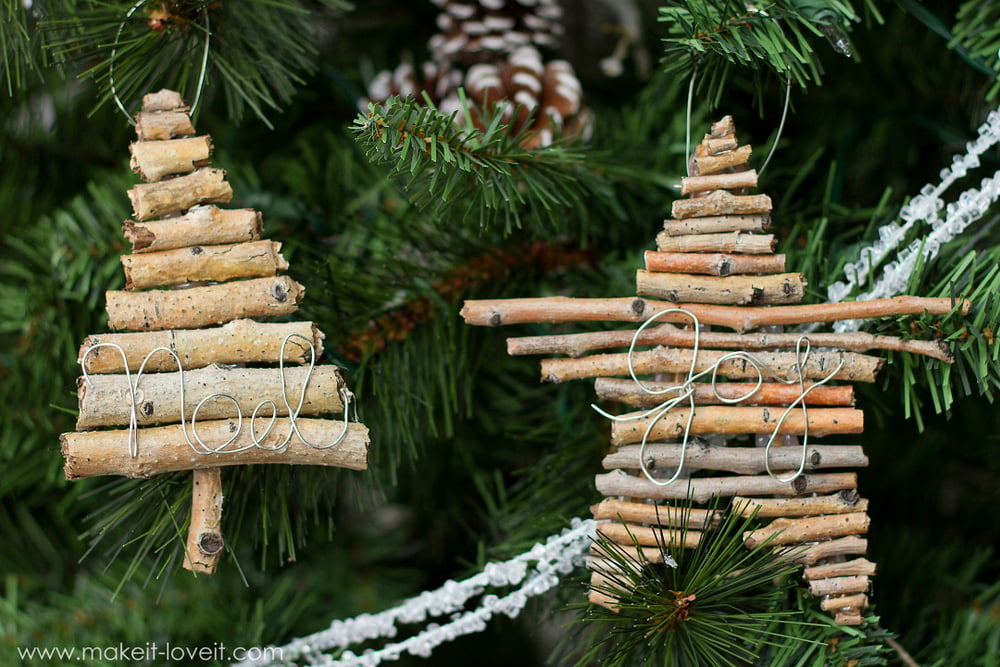 Thanks again for having me, Kari and Becky!

It’s always fun to join you guys…..especially this time of year! :)