Home » DIY Tutorials » DIY Costumes » Halloween Buckets for Trick-or-Treating
.
Have you noticed my newest sponsor, Cascade Refining, over on my sidebar…and found here?
They are an established company that gives you the best prices for your old jewelry.  What a great way to turn that old gold, silver, platinum, and palladium into some useful cash!  You can also follow them on facebook/twitter (Cascade Refining) and stay updated on upcoming giveaways, info with dealing with precious metals, and even request a free mailer kit to assist in sending them your old jewelry.  Go ahead and take a look and you’ll be happy with the great prices and fabulous service.
Looking for the Thirty-One giveaway?  Scroll down or click here.
. . . . . . . . . . . . . . . . . .
Sometimes I like to do unnecessary projects.
Like making matching trick-or-treat buckets for my kiddo’s Halloween costumes.
Were they necessary?
Not even one bit…
But buying two $1 buckets and then using up the scraps from their costumes…..sure made me smile.
And my little monkeys could hardly stand it when I said they couldn’t have them until Halloween.
Soon enough…
Each bucket was made with matching details from each of their costumes. 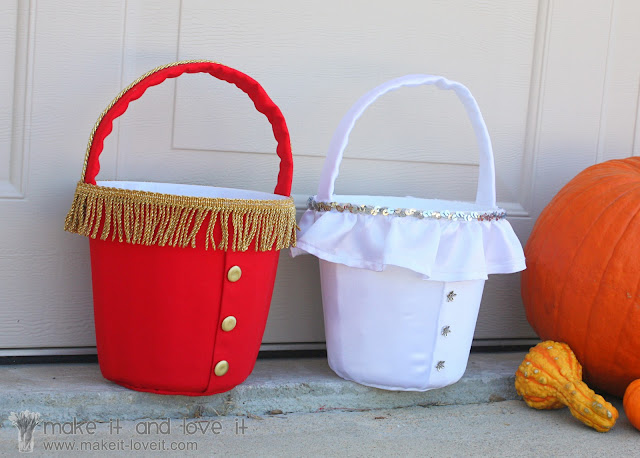 And look, plenty of room for treats… 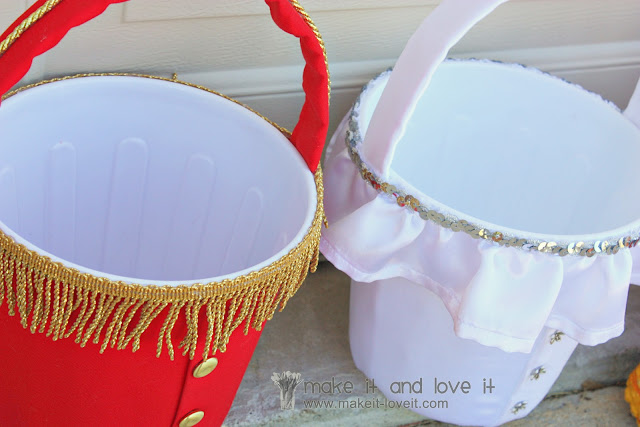 And in case you haven’t seen their costumes, and don’t know how these buckets match……. 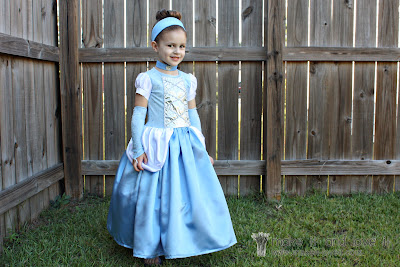 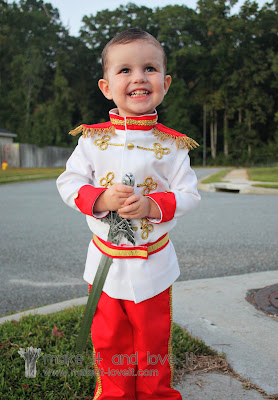 So yes, I just had to make matching buckets.
All the more fun. 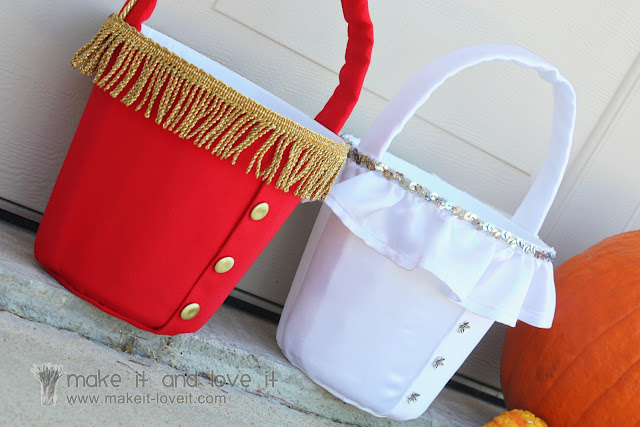 Would you like to fancy up your own buckets?
I used a hot glue gun for the majority of this project.  I only needed the sewing machine for the ruffle on the white bucket…..but if you don’t need a ruffle, this can easily be a no-sew project.
Tip: When gluing fabric to plastic, make sure you are using a hot enough setting on your glue gun.  Sometimes I get questions about the glue peeling off of plastic objects……but I rarely have problems with my dual setting hot glue gun, that I bought for $10 at Wal-Mart.  If I need an extra boost of heat, I just switch to the hottest setting and it always helps things stick even better.
First, take a look at the $1 store or Target/Wal-Mart for a little bucket…..whatever size you’d like.  Look for one that is pretty straight up and down, not round shaped at all (like the pumpkin buckets), and without too many contours on the surface.  And if you can find one with a handle, even better.  But I couldn’t.
So first, I cut two strips of felt that were about 1 1/2 inches wide and were long enough to make a handle, plus go all the way down both sides of the bucket.  (I ended up trimming a little off each end after this picture.) 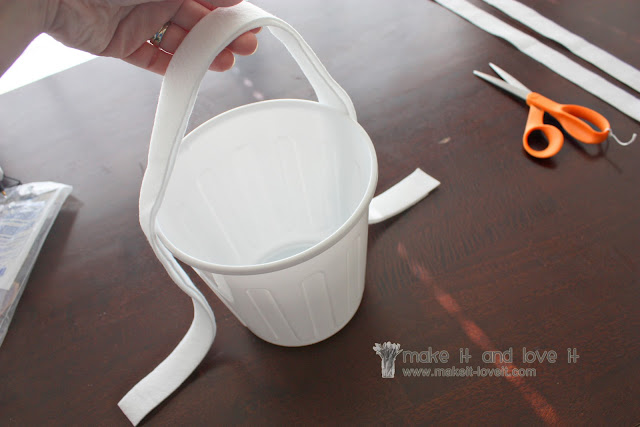 Then I hot glued the two strips together. 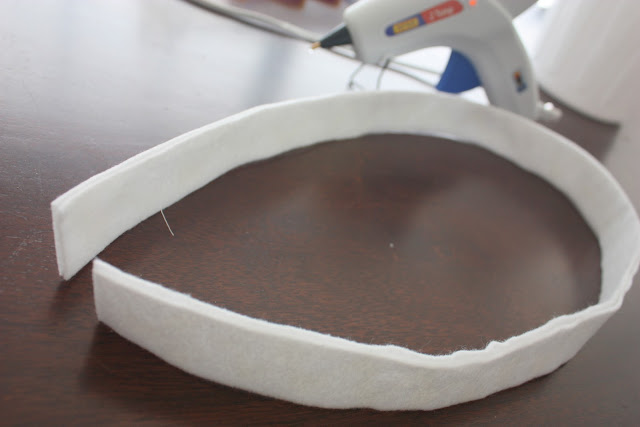 Then I cut a piece of matching material that was wide enough to wrap around the felt, plus a little extra. 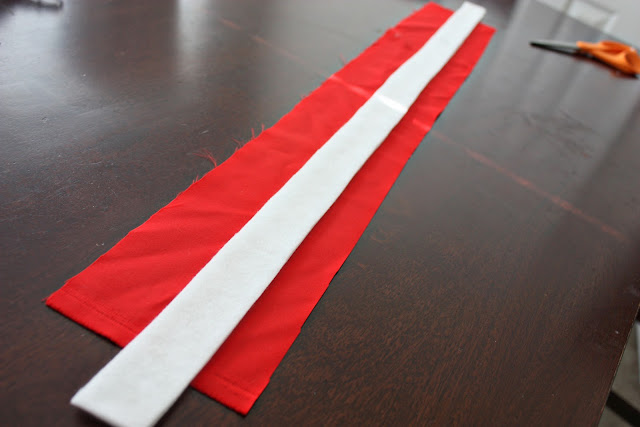 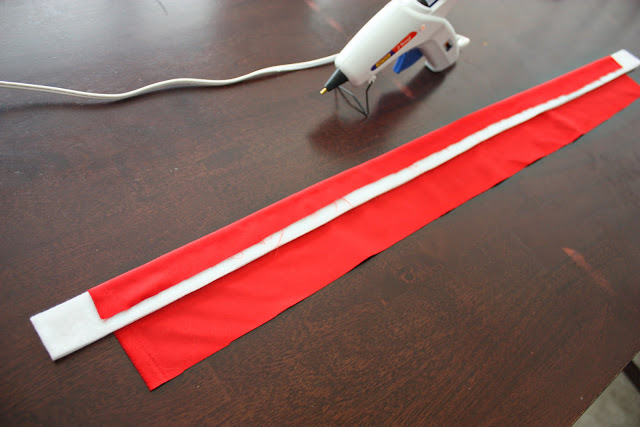 Then I folded over and ironed the other edge, to make a nice crisp 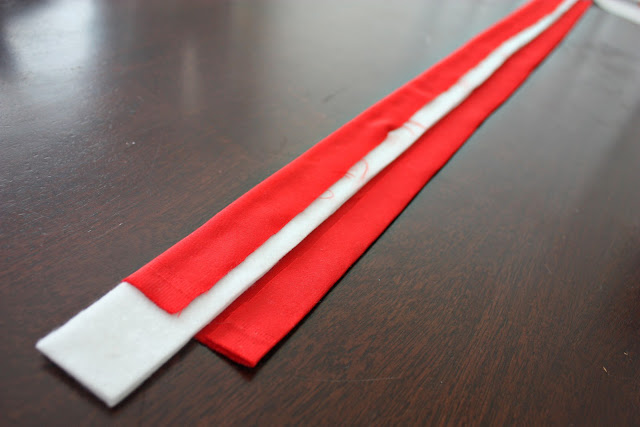 Added a bit of glue to the edge of the fold… 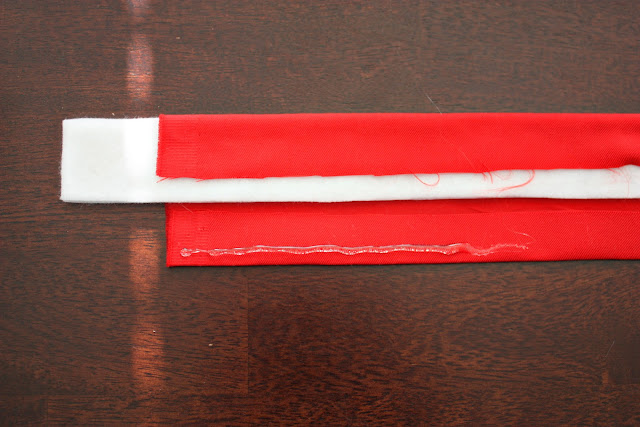 Then kept it tight as I glued the the folded edge over.  And I only placed a bit of glue, then folded, added more glue, folded over again, etc.  No need to rush. 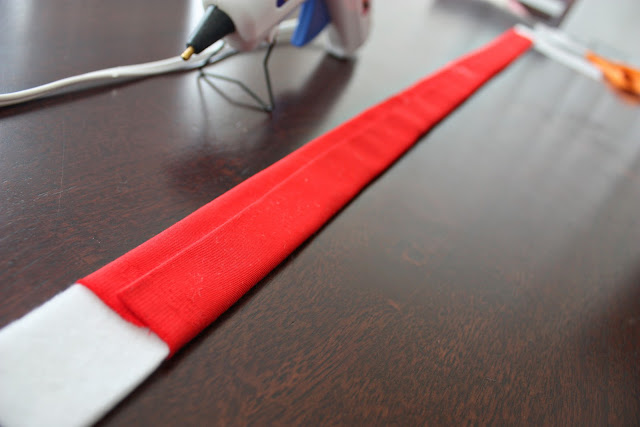 Then I glued the handle down all along the sides (using the hottest glue setting), right to the sides of the bucket, making sure the handle was centered. 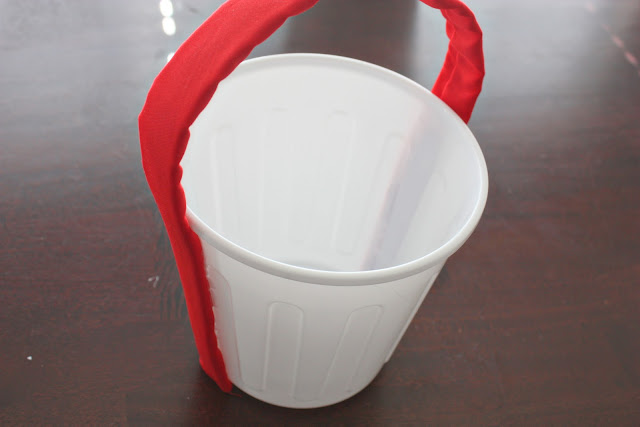 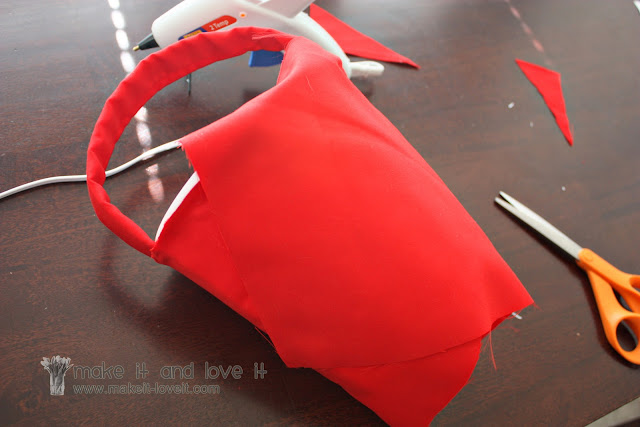 Then, when I got to two opened edges of the material, I glued one edge down.  The other edge, I ironed under the raw edge…..creating a nice fold.  Then I glued that edge down, making sure to keep the material semi-tight. 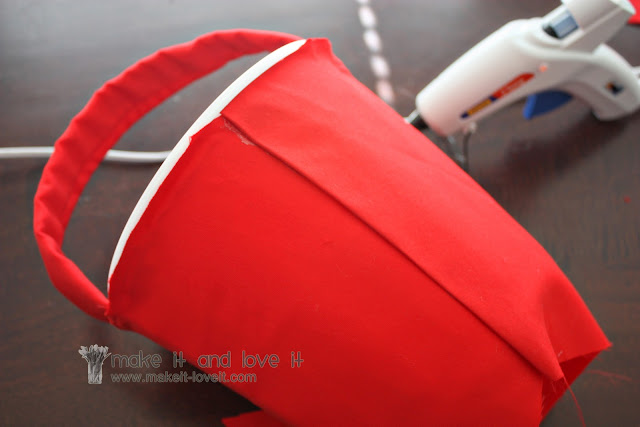 Then, I tucked under and glued the bottom edges. 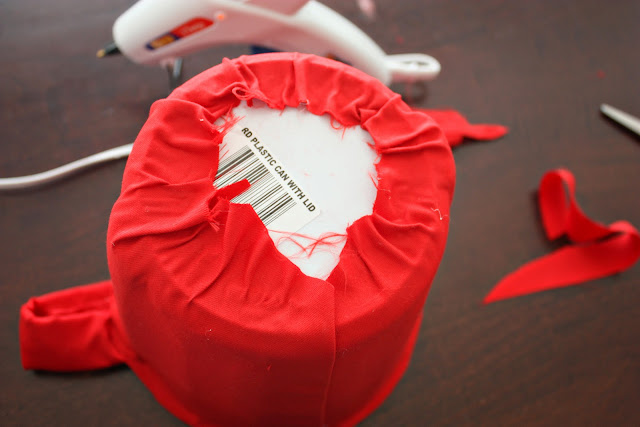 Then i cut a piece of felt that was slightly smaller than the bottom of the bucket, then a circle of fabric that is a bit bigger than the felt circle….. 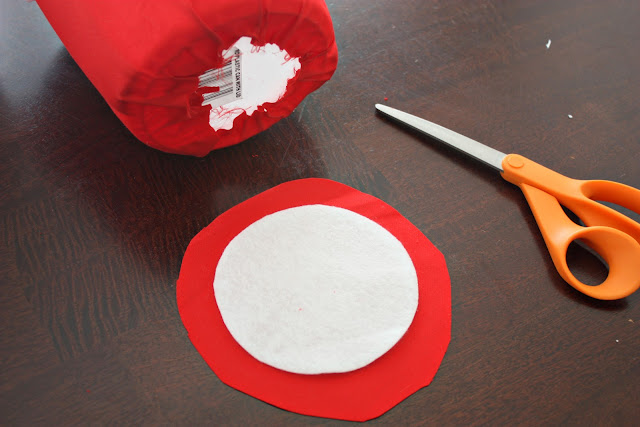 ……then glued down the edges of the fabric over the felt, trying to keep the shape of the felt circle as best as I could. 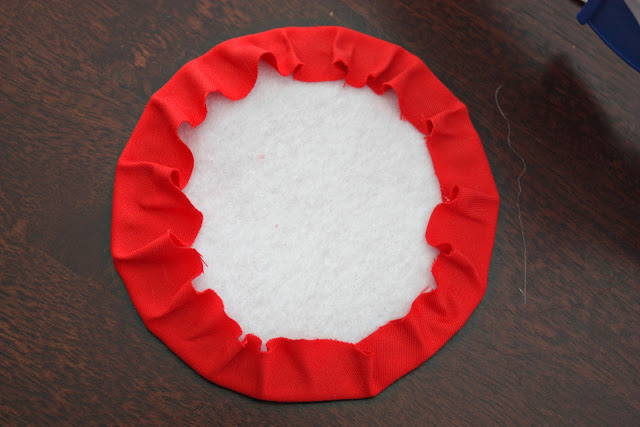 Then I glued the circle with the material facing out, to the bottom of the bucket.  This will hide all of the ugly edges that were showing. 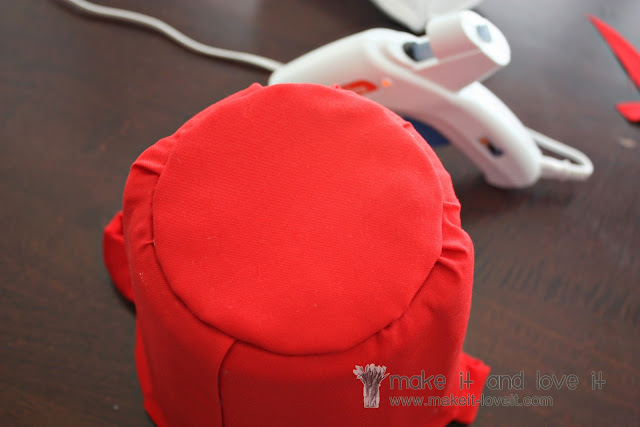 Next, decorate the bucket.
I added some gold cording to the handle…… 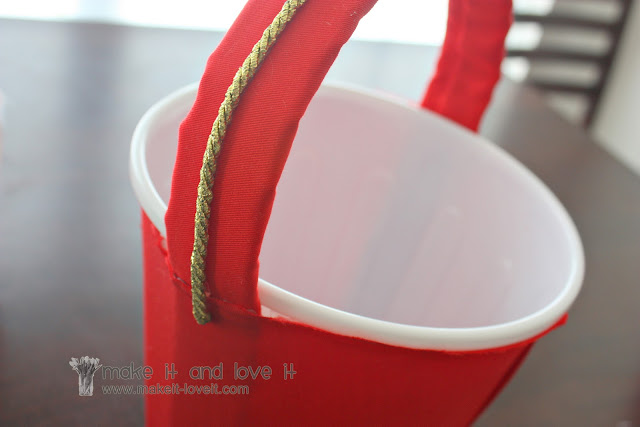 And added more of the cording to the top of the bucket, nicely sealing the raw edges of the top edge of the fabric. 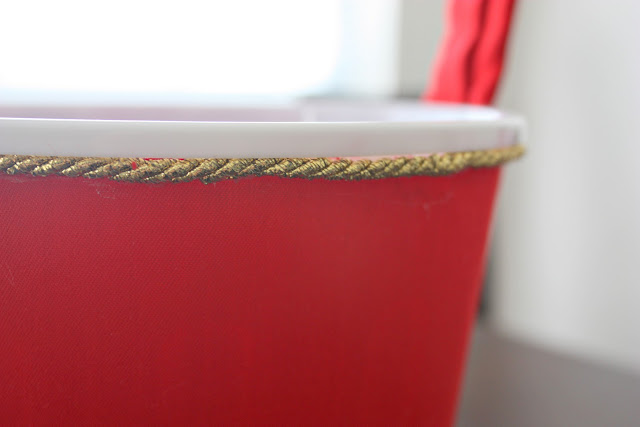 Then I added more of that gold fringe (that I used on the Prince Charming costume) around the top of the bucket.  This hid all of the edges and imperfections really nicely.
Then I added gold buttons along the seam of the bucket. 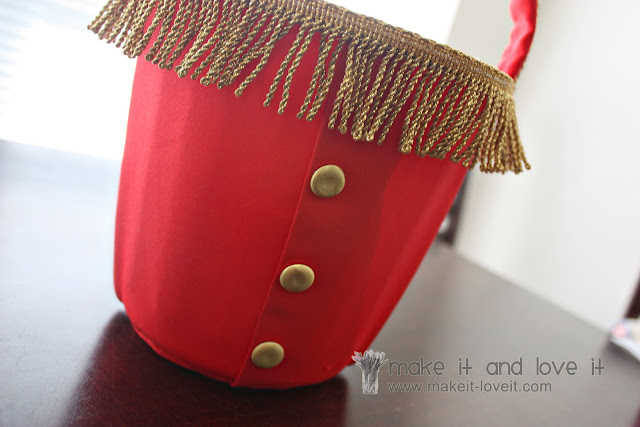 That’s it for the prince charming bucket.
For the Cinderella bucket, I made it exactly the same…..except I added a ruffle.  I cut a strip of satin that was twice as long as the top circumference of the bucket and was about 4 inches wide.  I turned under the bottom edge a 1/4 inch, then another 1/4 inch, then sewed into place.  Then I zig-zagged the top raw edge and then ironed the whole strip flat.  Then I made a basting stitch along the top edge and gathered the fabric up a bit.
(Need help with gathering, click here.) 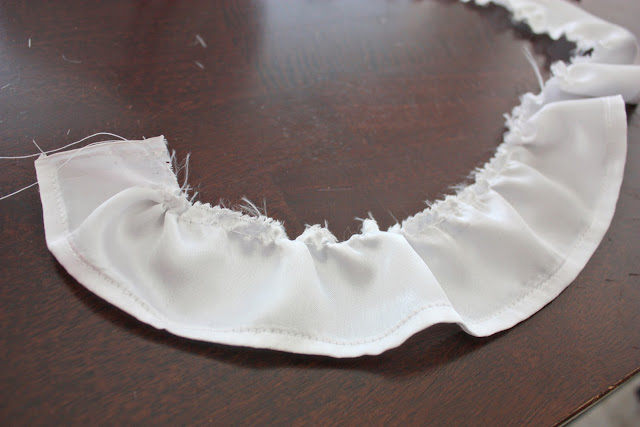 Then I adjusted the gathers until it wrapped around the top of the bucket and glued it in place.  I overlapped the ends just a bit, folding under the raw end of the piece that was on top.  That way you are hiding and tucking under all frayed edges. 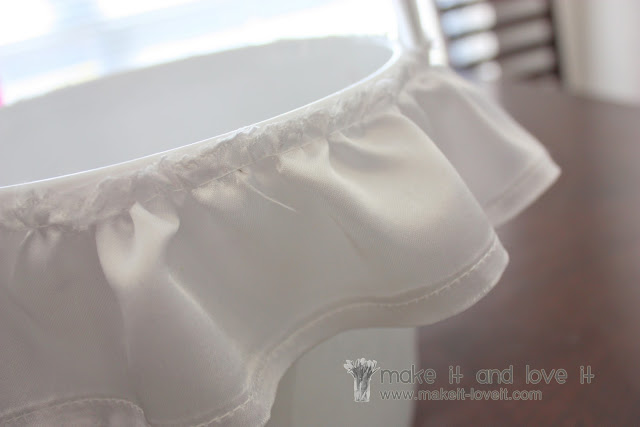 Then I added some sparkly trim (with hot glue) around the top to seal in all of the raw edges.  And then added some little metal flowers down the front folded seam. 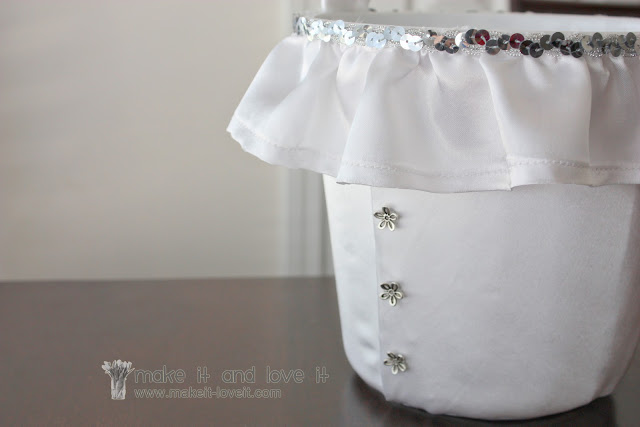 And that was it for both buckets.
Nice and fun……..and easy to alter for whatever costume your child is wearing this year.