Several days ago, I was trying to think of a quick project to do with our girl’s youth group at church.  You know, something that we could do in about an hour.  That’s when I thought of making some oven-baked clay jewelry, that I have seen around the blogosphere for a couple years now.  Then I remembered that I recently saw a basic tutorial on Then She Made for making clay necklaces.  That’s all it took to trigger my memory and get the juices flowing.

So, the idea just grew from there.  And I made more and more. 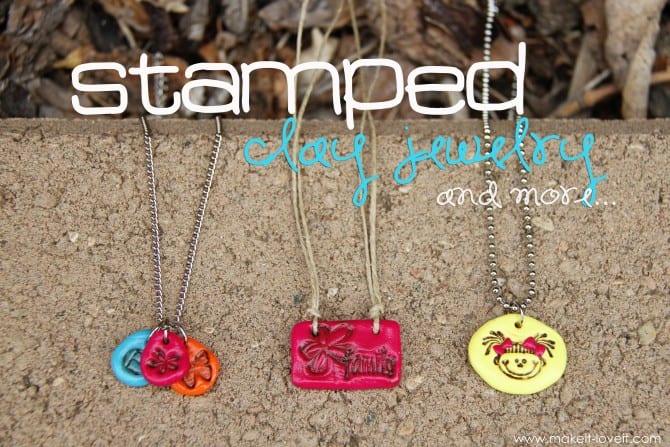 Originally, I just thought we’d make some necklaces.  (This one is for Elli but she was at school while I was taking pictures this morning.  So Chloe is doing the modeling today.) 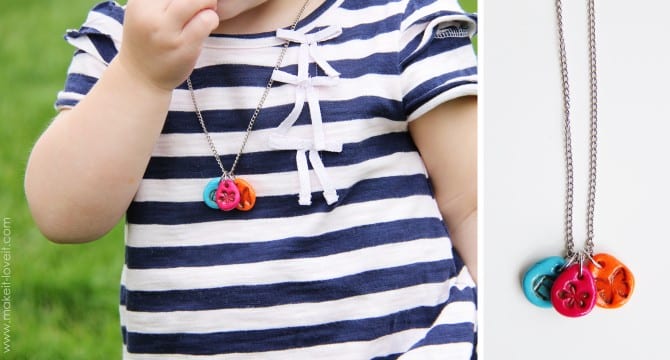 But then decided to turn some into key-chains too.  (Anyone have a baby born on Oct 16th?  I just chose a random day while making it but don’t have any Oct 16th babies.  Any takers??) 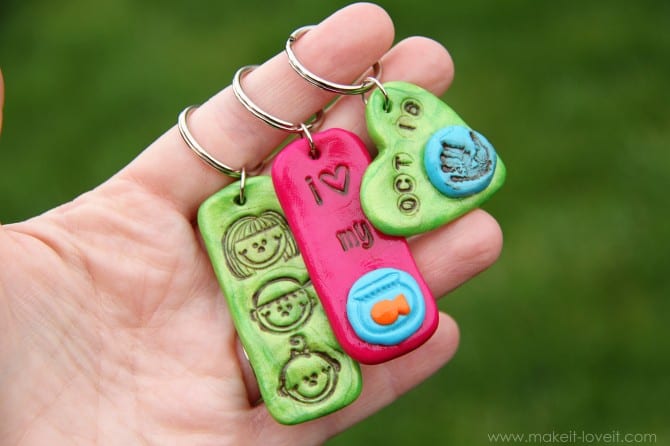 And then, at the last minute, I decided that this would be a fun gift tag to make ahead of time and then just add on to your next gift.  You could even press your name into the back, so your recipient knows just who it’s from.  But seriously, what a cute birthday tag or baby gift tag……..or a ‘thank you’ tag.  I better make several more of each. 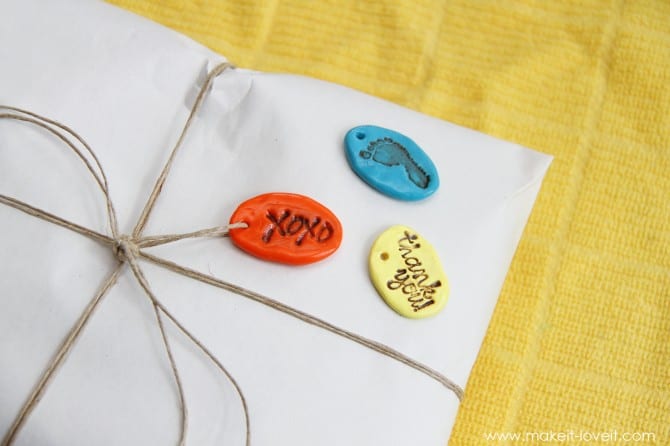 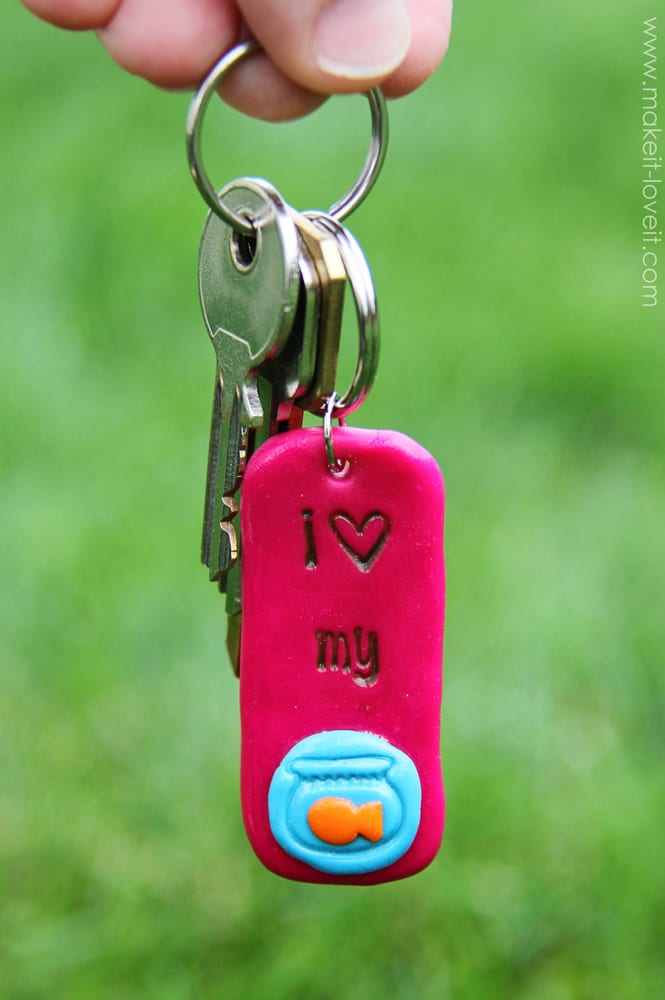 But it turned out to be a lot of fun.  And Steve even got jealous and said “hey, save me some of that clay…..I wanna make something too!”  Okay mister!

My kiddos are super excited to make some later this afternoon.  (Because I made all of these in the evening after the kiddos were in bed.  They just saw the results.)  Connor wants to make some cool figurines and animal shapes and Elli is dying to add more charms to that necklace on the left.  I told her that they are all interchangeable and she’s beyond excited.  Wouldn’t it be fun to let the kiddos make some for friends’ birthdays?!?!  Especially if they’re not perfect and are obviously kid-made?  I love it already. 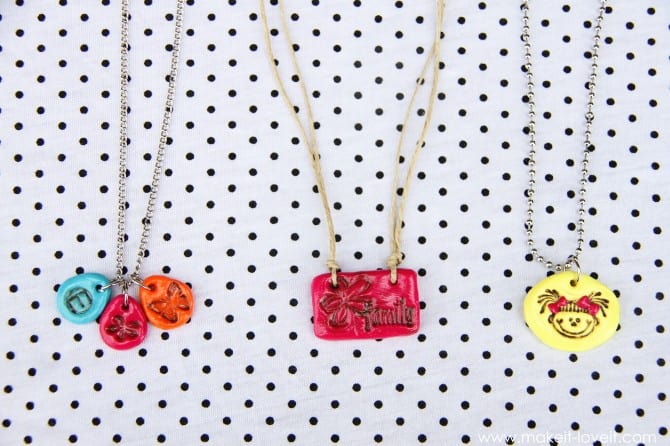 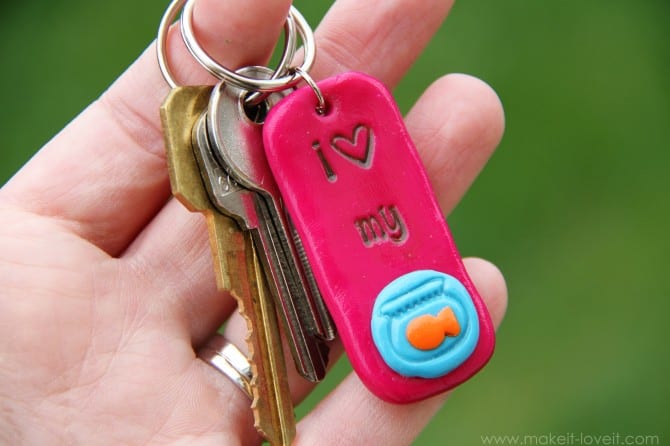 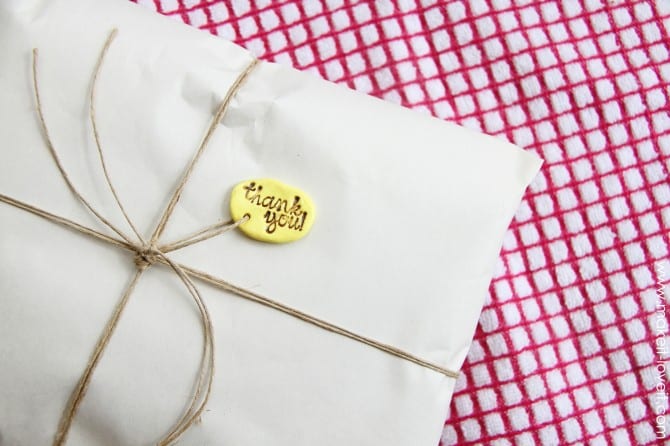 Would you like to make some clay jewelry/keychains/tags for yourself?

As I mentioned above, Then She Made is the blog that recently inspired me to finally try my hand at making something I’ve always wanted to try.  (Amy is much more proficient in her skills and she even sells many beautiful designs in her etsy shop.  And no, I don’t sell the things I make here but I’m pretty sure Amy could make you anything your little heart wanted.  Check out her shop……you’ll see! :) )

But seeing her tutorial was all I needed to get me thinking.  Yay.  That’s when my fingers went crazy making more and more.  Because it was that addicting.  No joke.  Amy also mentions that you should plan on it taking about 3 hours.  I helped the youth group girls make theirs in about an hour.  But they only made one each and I told them to keep them simple.  (And they used letter stamps for writing words, nothing hand written.  That saved us some time too.)  But if you are helping someone who has big plans and wants to make something more intricate, it will take longer.

I bought my oven-bake polymer clay at Hobby Lobby.  I bought the Sculpey brand……mostly because my husband told me that’s what he used in high school.  It brought him a bit of happy nostalgia. ;)

I bought 5 different colors of but kinda wished I would have bought about 10 more. ;) 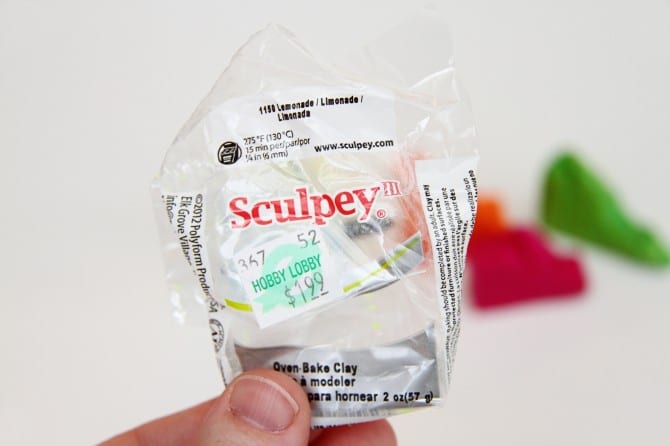 Using polymer clay is about the same for all brands.  Baking directions may be a little different, so check your packaging.  However, the next several steps will all be about the same.  Sculpey even gives some tips on their site for the softening, sculpting, shaping, baking, and glazing of their clay……you know, in case you want to learn more.  But words only go so far, right?  So here’s a few pictures to see the process:

To get started, break off a chunk and start kneading it between your fingers to get it nice and soft and warm.  Keep in mind, you don’t really need very much. 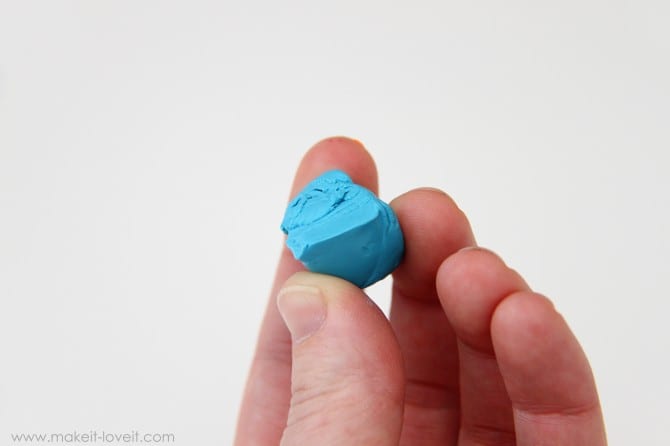 After it’s nice and soft, mold it into the shape you’d like it and smooth out the edges just how you want it.  And don’t worry, your own little finger prints in there gives it some character! 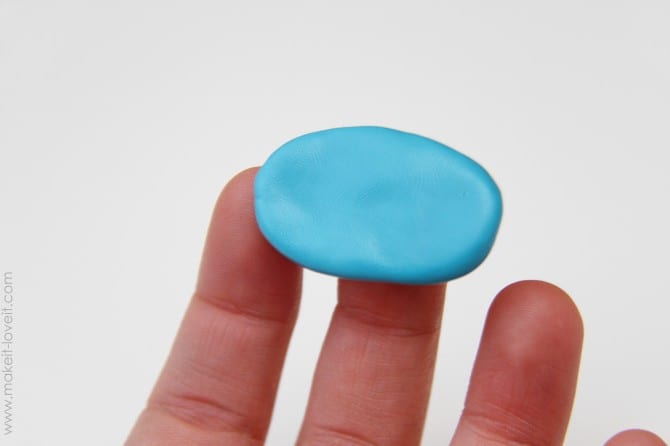 Now, you can start imprinting designs on it.  If you have rubber stamps, they work great.  But look around you…….you may have a really cool necklace or barrette or earring that would make the perfect imprint.  One of the girls at the youth group activity had a mustache ring on and she used that.  It was cute.  And perfect.  I actually bought these stamps at Hobby Lobby because all their stamps were 40% off.  (That store is funny.  Every other aisle is always on sale.  Then they switch. There’s always a sale there….which makes me happy!) 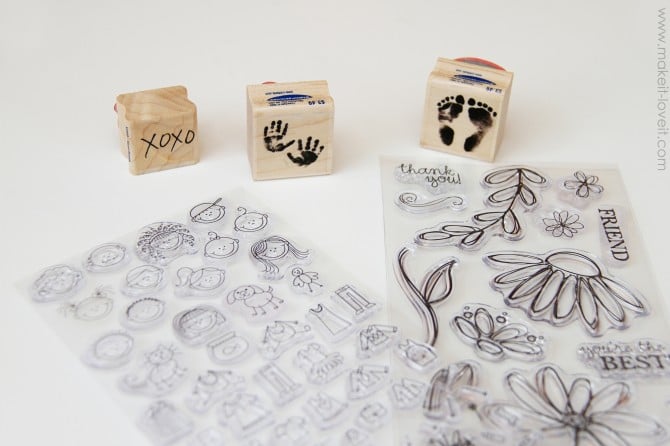 So, after you decide which stamp you want, go on and press it in.  This clay is not super soft so you’ll have to use some pressure but not too much because you don’t want it too deep either.  (And if you mess up, squish up the clay and try all over again.  No biggee.) 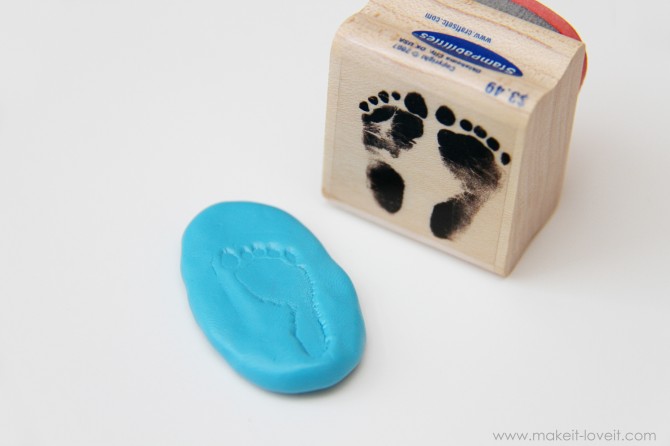 Then, decide where you want your hole to be and poke a toothpick through.  You may want to rotate the toothpick around to get a nice smooth and even opening, expanding it larger if needed. 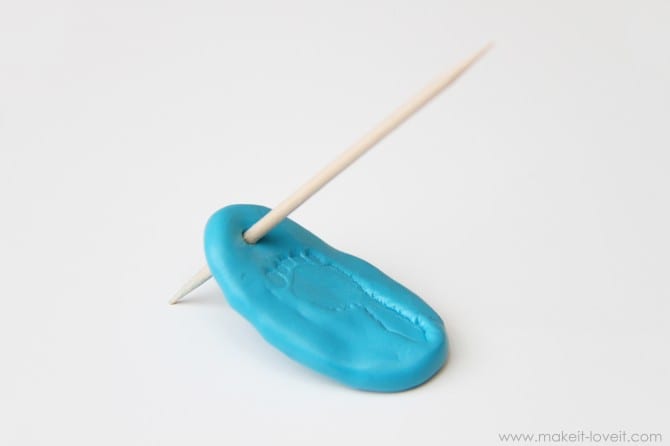 If you want to add words or numbers and you don’t have the exact stamp to do it, the easiest method to use is individual letter stamps.  I have some metal stamping letters that worked great and were nice and small.  (But there are small letters of the rubber stamp variety out there too.) 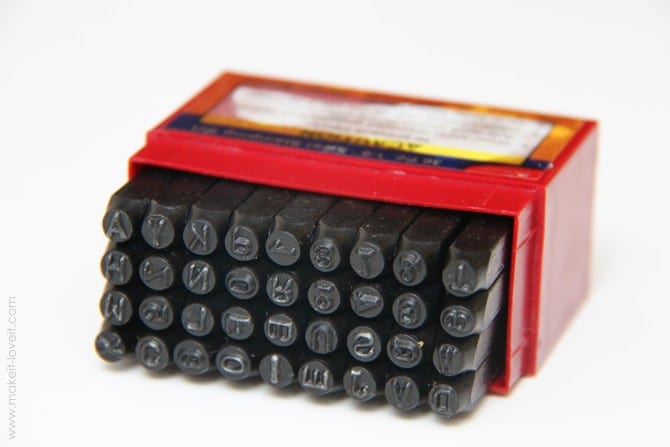 Once your clay looks just like you want it, place it on a tinfoil covered baking sheet and bake at 275 (F) for 15 minutes per 1/4 inch. 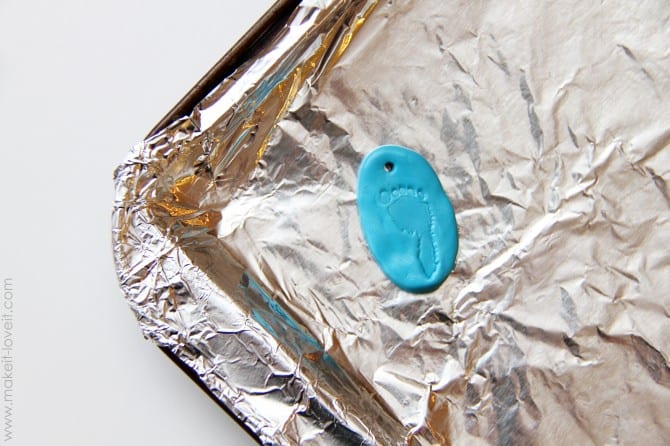 After it’s cooled, you can either stop here and apply your glaze or you can add some paint to give the imprint some dimension.  I have seen several methods using paint to give your imprint some dimension but Then She Made mentions using brown paint and not black because black stains easier on the spots you don’t want it to.  So I used brown and it worked great.  I’m not sure what sort of paint she used, but I found that some of this inexpensive acrylic paint worked great.  (But a reader emailed me to let me know that using stamp ink works great too.  Great idea!) 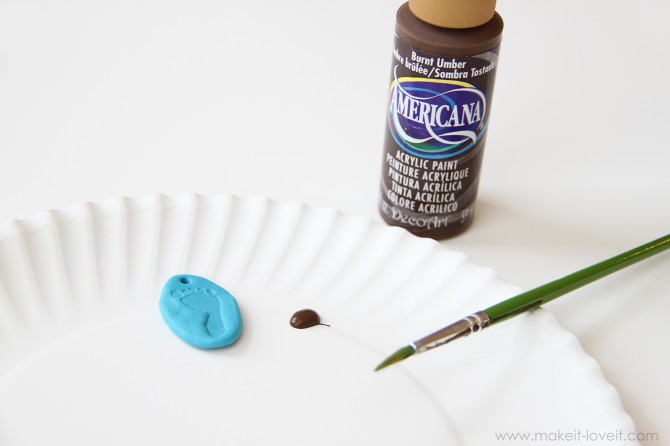 So I just blotted some paint down into the cracks and inside the shape…….and then quicker than quick, I wiped it off.  If you leave it on there, it will soak in where you don’t want it to and will be hard to get off.  (**If you do get some unwanted paint around the outer edges, wet your paper towel and rub it off with that.  But the lighter your clay, the harder it is to remove unwanted paint.  So be careful.  I put a big blob on some yellow clay and didn’t wipe it off quick enough.  It stained in funny places and just looked dirty.  So I painted over the whole entire piece, then wiped it all off, to give the whole surface an even “antique” look. And that helped.) 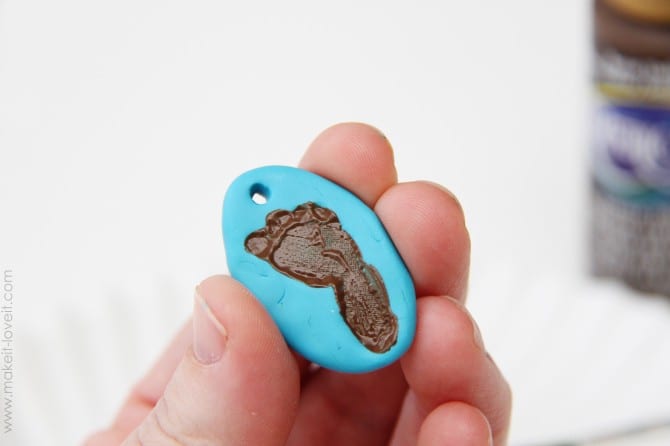 Once you have wiped enough paint away and have it just how you want it, let it dry.  Then add a thin-medium coat of Mod Podge.  I used gloss but you could use matte also.  Sculpey also has a clay glaze available for purchase. 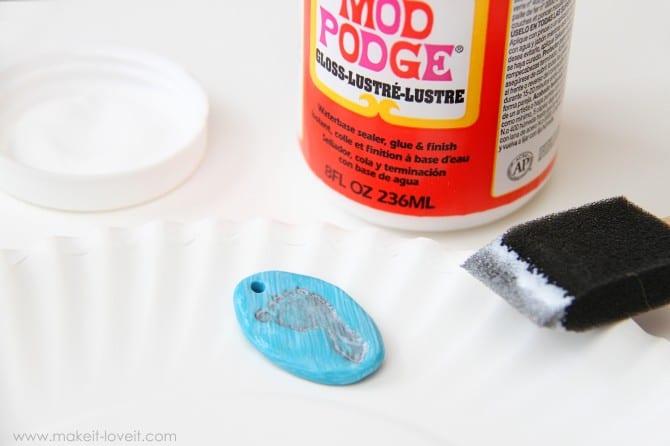 Then allow the Mod Podge to dry.

Now, decide if you want a necklace or key chain…….or whatever else you had in mind.  To keep cost really low, thread a piece of thin hemp through your hole and tie a knot. 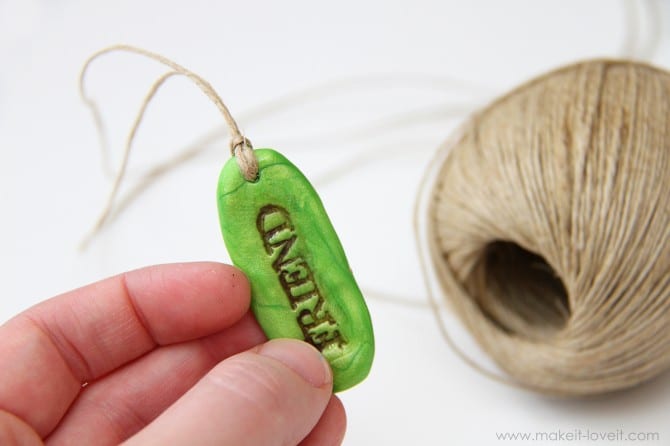 Or, for just a bit more buy some jump rings and chains at your craft store. 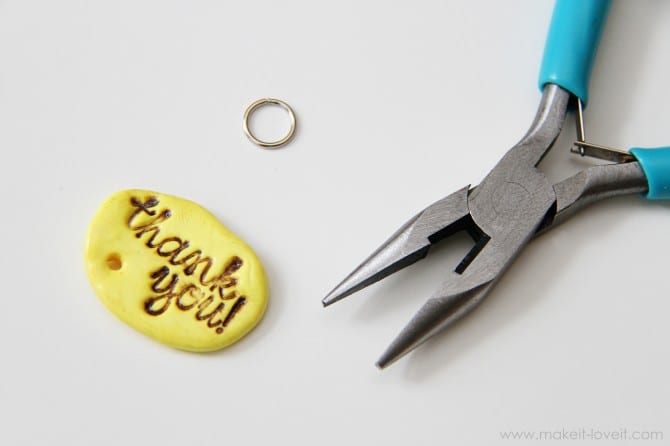 To use a jump ring, separate the two ends and poke through your clay opening. 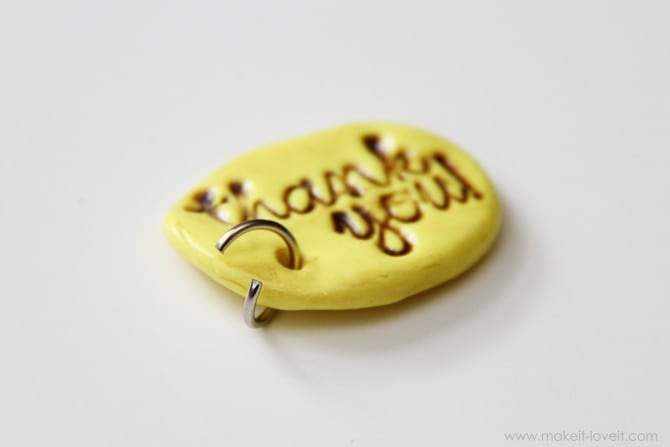 Then bend the jump ring closed with some pliers.  That’s it. 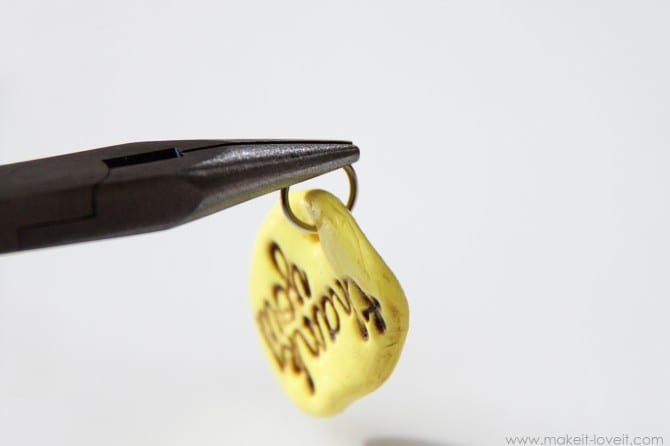 Now attach to a key chain or a necklace. 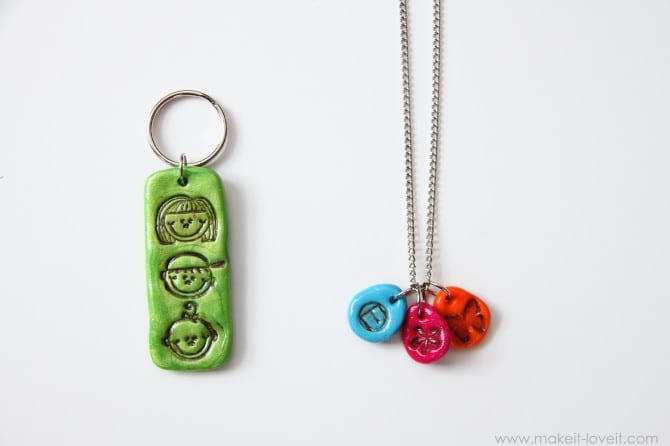 Or do with it what you may.

*****As a side note, if you are adding layers of colors (like I did with that baby hand and the fish bowl), make your imprints on their separate pieces of clay and then be sure to score your clay before attaching them together.  What that means is that before adding on the blue hand, for example, I lightly scratched up the back of the clay with a toothpick and then I also scratched up the front of the green heart where the blue hand would go.  Then I pressed the blue hand down on to green heart hard enough to attach it but not too much too squish the hand imprint.  Scoring the clay gives it some texture so that they will stick together better.  Then you can bake it just like normal and then paint and glaze it.