Teaching Kids to Sew, Part 4: Intro to the Sewing Machine

Soooooooo, it’s 2 1/2 weeks into summer…….and the kids are getting restless.  Haha!  It’s always a crazy transition between them being completely scheduled during the school year and knowing exactly what needs to be done, where we’re going, etc……and then summer kicks in and there’s not a whole lot of schedule or routine.  We’ve actually had to change that up a bit and have some summer responsibilities and activities to keep everyone happy and busy, but this whole summer thing requires a little more creativity (and patience) for this mom of theirs!! :)

Anyway, I was just thinking about a series that I started on this blog called “Teaching Kids To Sew”…..but I never finished it, and that was 3 YEARS AGO!  Oh my goodness, what happened?!?!  I guess life happened…..but I suddenly realized the other day that I had every intention to teach Elli how to sew by now, but just haven’t.  She nine years old and the 3 lessons in the “Teaching Kids to Sew” series are all focused on teaching kids hand sewing skills, which is an important foundation for sewing…..so they can figure out how sewing actually works. 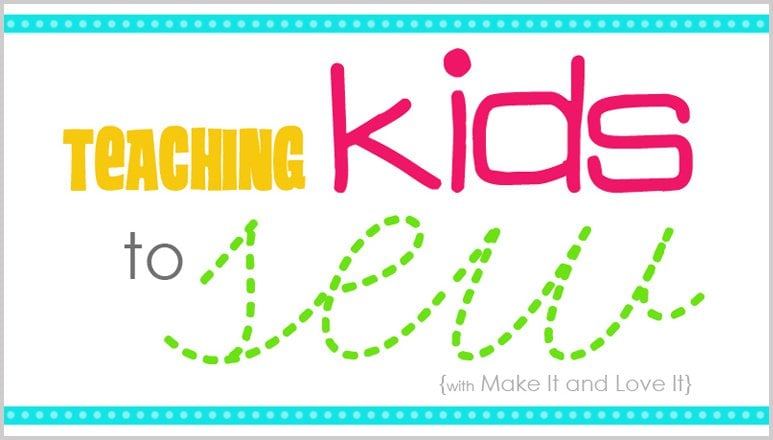 And let me tell you, Elli has got those lessons down pat!!!  She hand sews EVERYTHING!  Doll clothes, bags, pillows, etc.  It’s crazy how much she wants to sew and that I haven’t even taught her the sewing machine yet……agggghh!!  Mom fail.  But that’s okay……because she’s gotten a little older and more responsible and her coordination has definitely improved these past 3 years.  And after seeing the kiddos so restless this summer and trying to figure out little things to keep their minds (and fingers) busy, I decided it was finally time to teach that little chickie how to sew!!!

And let me tell you…….this girl of mine felt like a SUPERSTAR!  I think I forget how much she watches what I do, and in her eyes, the fact that I can turn pieces of fabric into wearable items, is probably really amazing!  So she was so excited to join me in this adventure!

So the next lesson in this “Teaching Kids to Sew” series — an intro to the Sewing Machine! 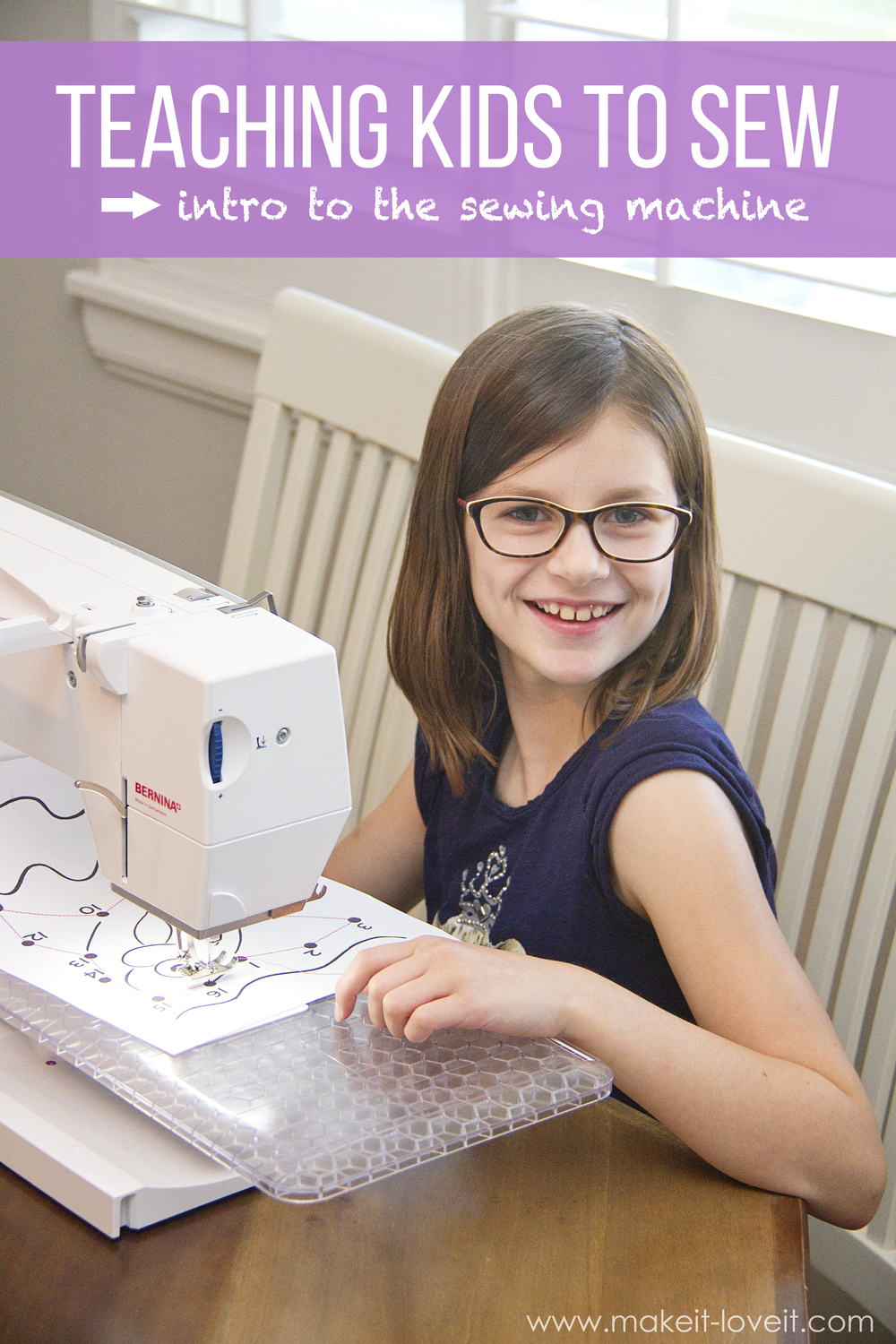 ***Before going any further, these lessons aren’t just for kids.  These techniques would work with any age…..and are great practice for anyone trying to gain some skill and practice working on the sewing machine.  It just takes a little time but I promise, you’ll probably surprise yourself with how quickly you catch on.  And in no time at all, you’ll be sewing things you never knew you’d be able to make! :)

First of all, don’t rush the sewing machine.  I really feel like if you start with a complicated project and try and have them sew an actual project, it could really frustrate them if it doesn’t work out.  They really need to get a feel for this machine, how it works, and that they are IN CONTROL of it!!

So, sit your child down in front of the machine and teach them a few of the basic parts of the sewing machine. (You don’t have to teach them everything…..because that will come as you teach more and more. If you try and do too much, they’ll get bored and won’t remember anyway.) Show them the on/off switch, show them where the needle is.  Point out the buttons on the front and what they do.  Show them the foot pedal and how it’s connected to the machine.

Now, I explained to Elli that when you sew, it’s like you’re driving a car. The pedal on the ground is like a gas pedal and if you push it all the way down, it speeds up the motor and makes the needle go REALLY FAST.  But if you push lightly, the motor slows down the needle moves up and down a lot slower.  So, I made sure there was no thread in the machine and then gave her all power.  I told her to push down the pedal all the way and to listen and watch.  And then told her to push ever so lightly and watch how slow the needle moves up and down.

Just letting them play around with the pedal and get a feel for the machine helps them get a feel for how much power they have and what it requires to keep a constant speed.  Here’s Elli….watching that needle move up and down, up and down, testing out different speeds. 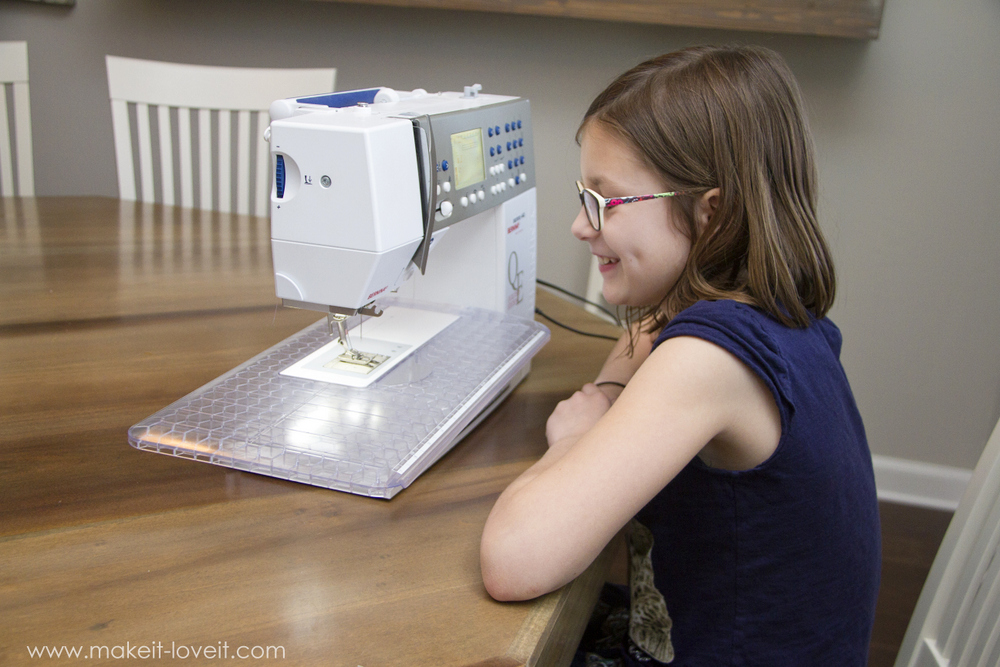 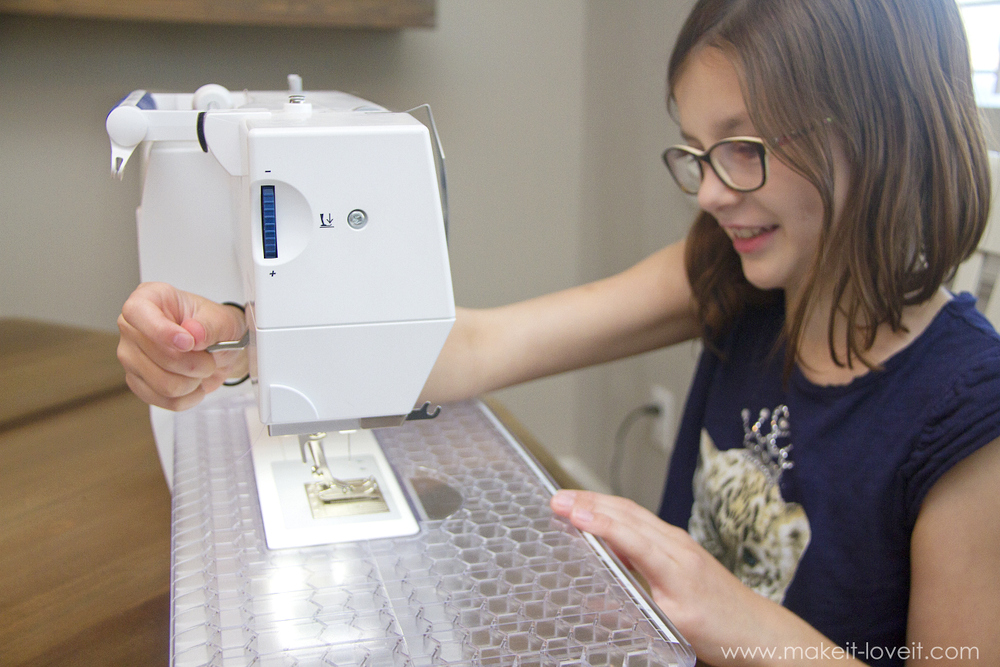 Next, using the needle.  I decided that before using fabric to sew on (which is more wiggly and can stretch and cause more frustration), it’s best to use paper.  Allowing them to sew with just a needle and NO THREAD, allows them to practice lifting and lowering the presser foot and learning control over the paper (and soon to be fabric).  Their brain will soon start to realize that the needle only moves up and down and that if they need to turn a corner, they have to make that happen by maneuvering the paper.

So draw some lines on a paper…..straight ones, curved ones, and jagged ones……..and have them start at one end of the line and try to line up their needle with their first line.  (If you want to use the practice sheets I put together, you’re more than welcome to use them by clicking HERE.) 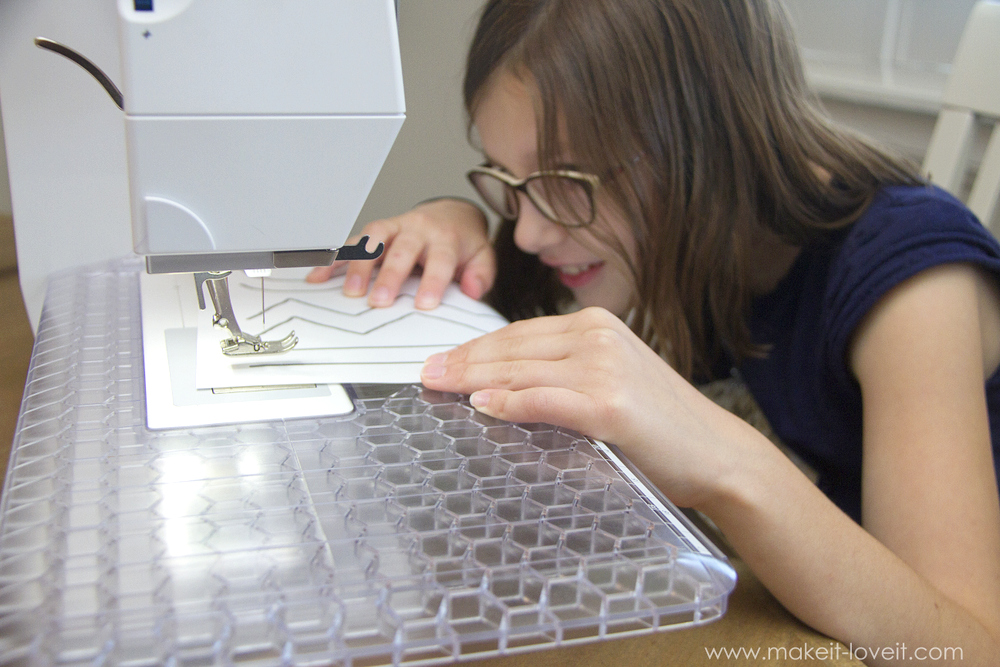 But first, the Hand Wheel.  Show them that if you turn the hand wheel on the right side of the machine TOWARDS YOU (and always towards you), it will make the needle move up and down.  Explain to them that this gives them more precise control over the needle and is usually used to put the needle down in place to get started with your stitching. 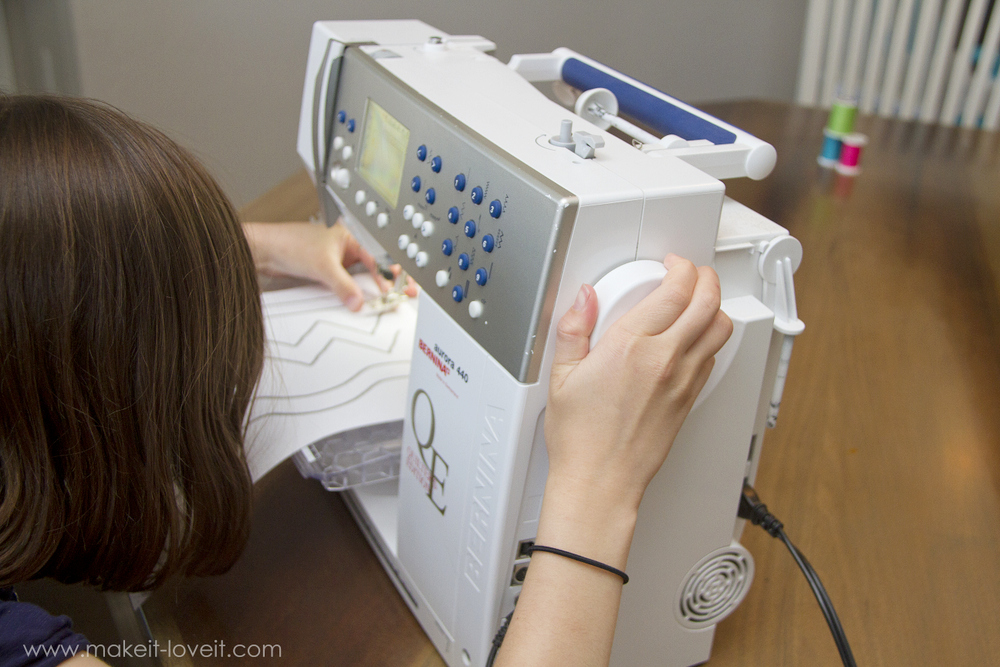 Now, let them sew.  Remind them about the presser foot and how they are in control of how fast or slow it goes.  Show them that they must guide the paper with their hands so that the line of sewing moves where they want it to go….and then just step back and let them give it a go!  Remember, there’s no thread in the machine….so they can’t really do any harm.  But I bet it will surprise you how well they do!!! (***A quick reminder: teach your child that they should never place their finger near the needle while it’s sewing.  Machines are powerful and will stab right through their skin, causing them to pull away, and could cause injury and yeah, blood.) 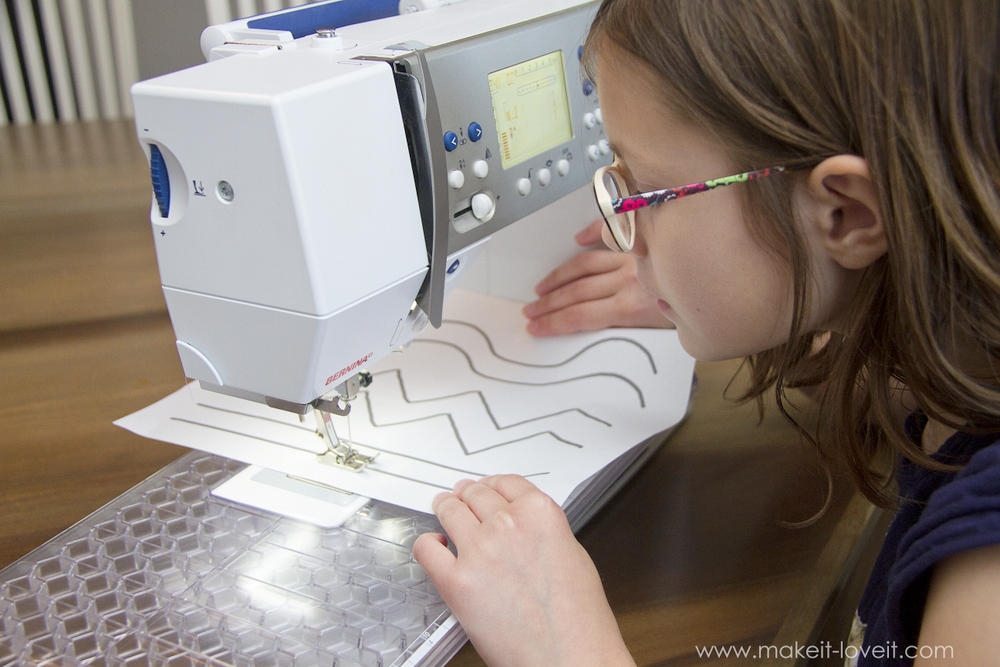 Once they’ve mastered the straight line, let them sew a jagged line.  Remind them about the presser foot and the lever that lifts it when they have to turn a corner.  Explain to them that once the presser foot is lifted, the must turn the paper with their hands until it’s facing the direction they want it to sew.  Also, sewing down a jagged line is great practice for them to get used to lifting and lowering that presser foot over and over again. 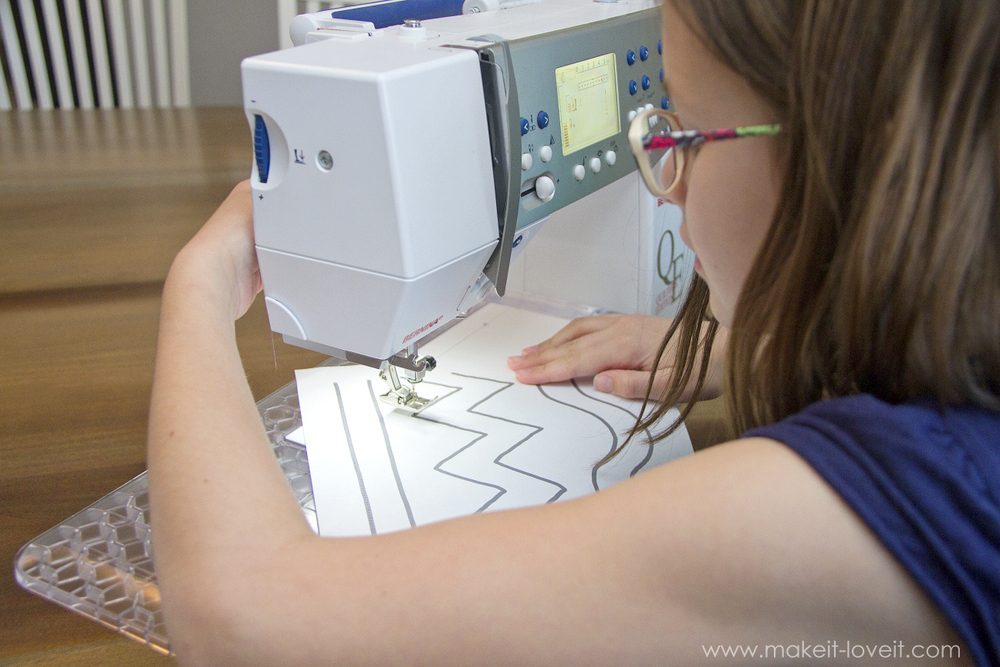 Now, a curved line.  This can be a little more tricky but show them how to guide their fabric around a curve with their hands and to slow down the machine as they’re sewing. 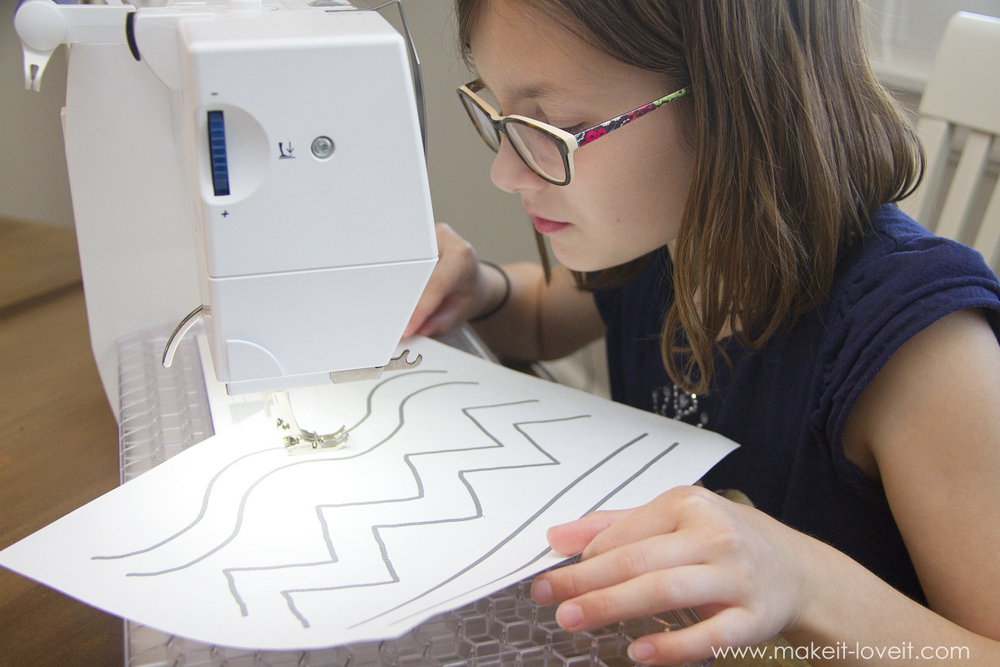 And once they’ve sewn through their lines, show them how to lift their lever to pull their paper out and then take a peek at what they’ve done!  You might be surprised at how closely they stayed to the line!  (I was seriously shocked!!!  This girl is ready to sew!)

Next, threading the machine.  Now that they’ve gotten used to the needle and the foot pedal….it’s time to load it up with thread.  Show your child how to load a bobbin and explain that there’s always a top and bottom thread working together to create a line of sewing. (Sorry no picture.)

Now, sewing with thread.  Before even sewing on fabric with thread, have them practice sewing with thread on paper.  They can always go sew right on top of lines as they practice using thread….but it’s always fun to make it more interesting!  How about a Dot-to-Dot?!!

When I handed Elli the paper, she had no idea what it was…..so that made it really fun for her to figure out.  (I just googled “easy dot-to-dot” and found several that would work. However, if you want to use the practice sheets I put together, you’re more than welcome to use them by clicking HERE.) 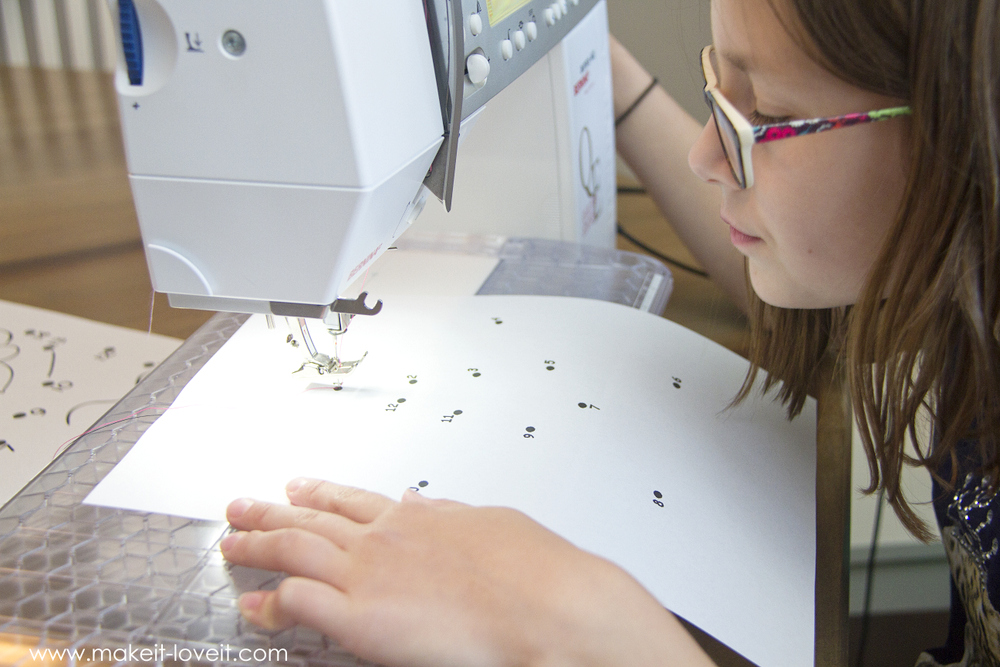 Dot-to-Dot sheets are PERFECT for practicing control though.  They have to lift and lower the needle a lot, they have to re-position the paper so that the presser foot is pointing at their next dot, and they have to gauge where their machine will sew and fix it as they go. 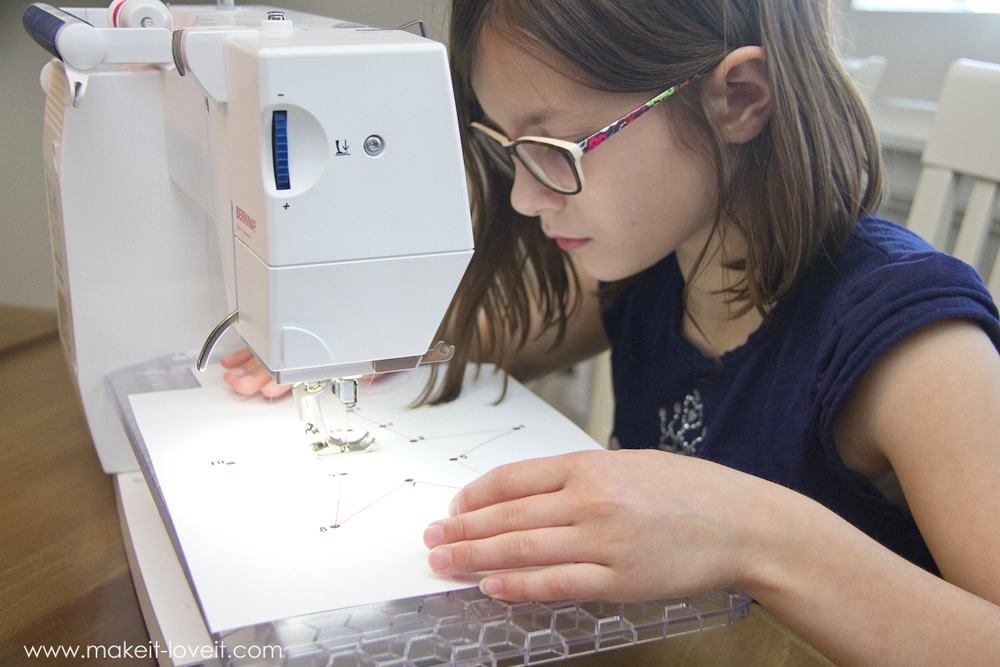 And then, once they’re done, they get to see what they actually created! 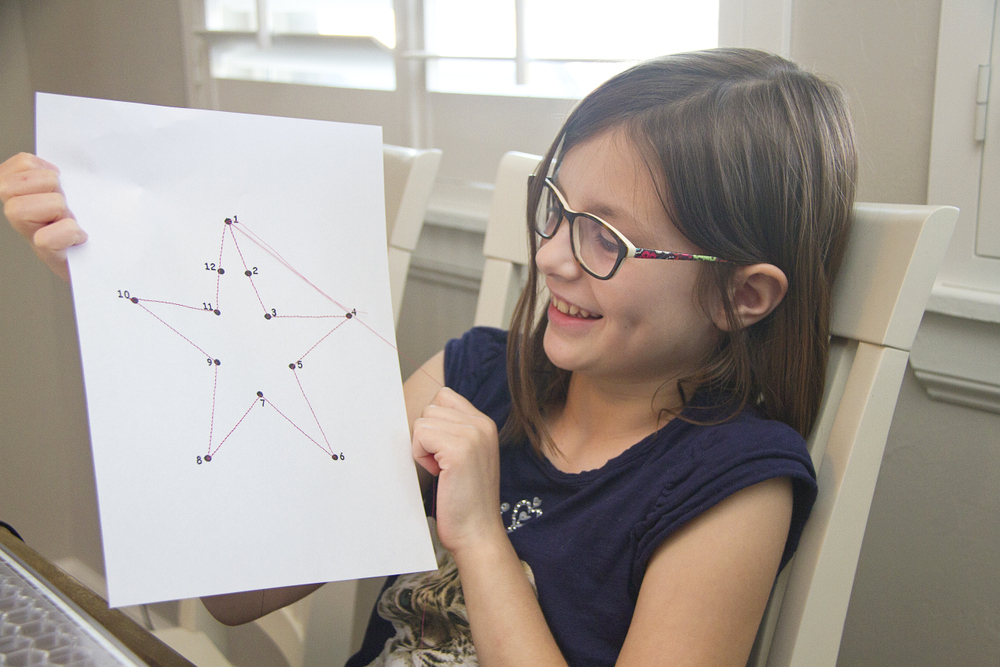 And then have them do another one….and keep repeating, if it looks like they need more practice! 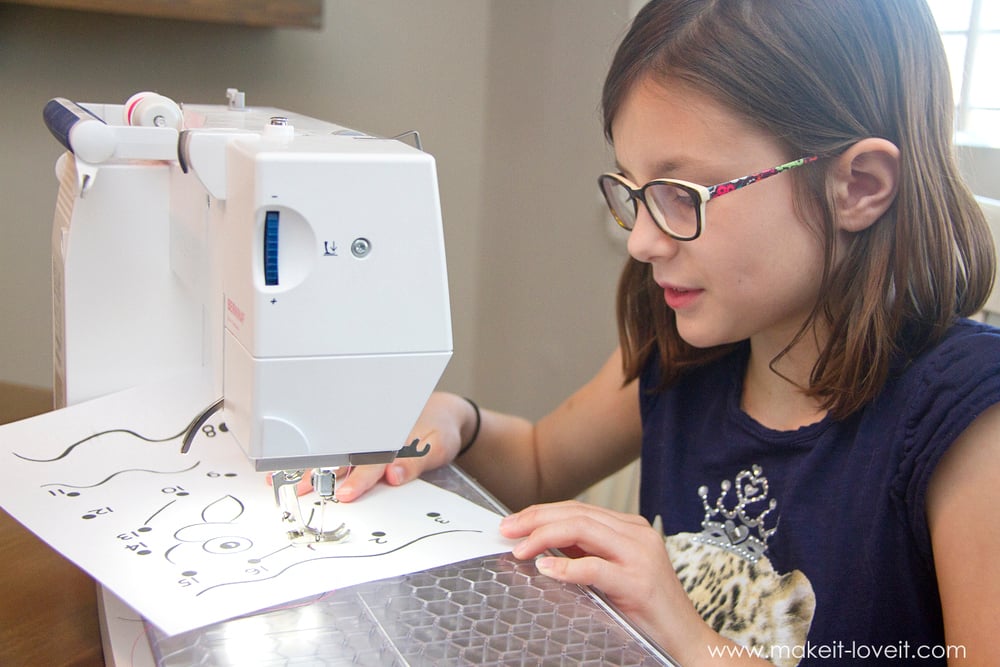 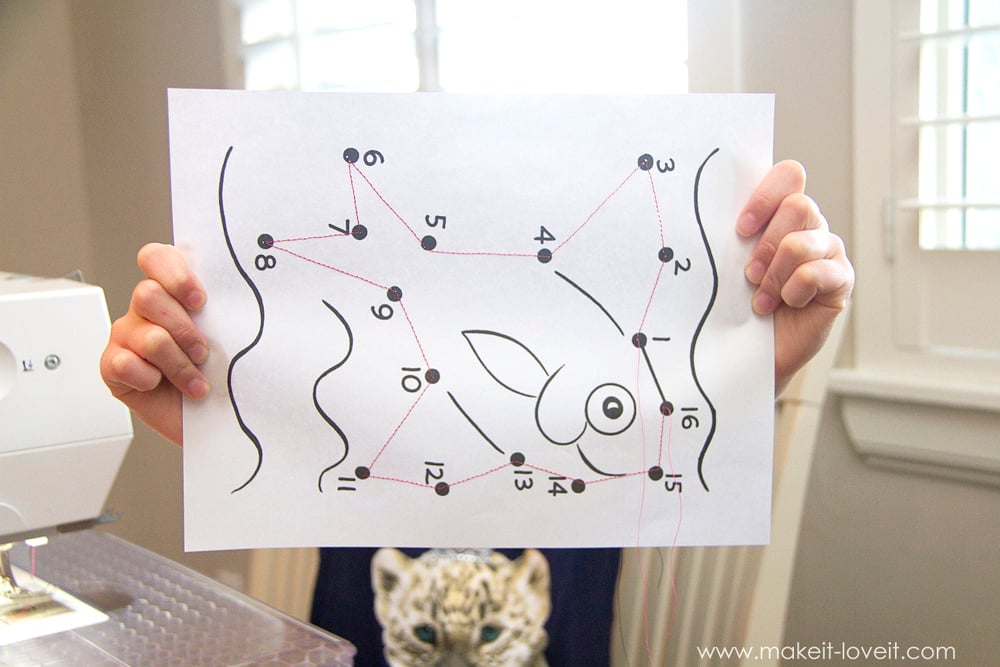 Another fun way to practice that doesn’t require exact lines, and so they can focus on consistent speed, paper positioning, and direction……is sewing through a maze.  This is fun for them to figure out and practice looking ahead to where they have to go.  (I just googled “easy maze” and found several that would work. However, if you want to use the practice sheets I put together, you’re more than welcome to use them by clicking HERE.) 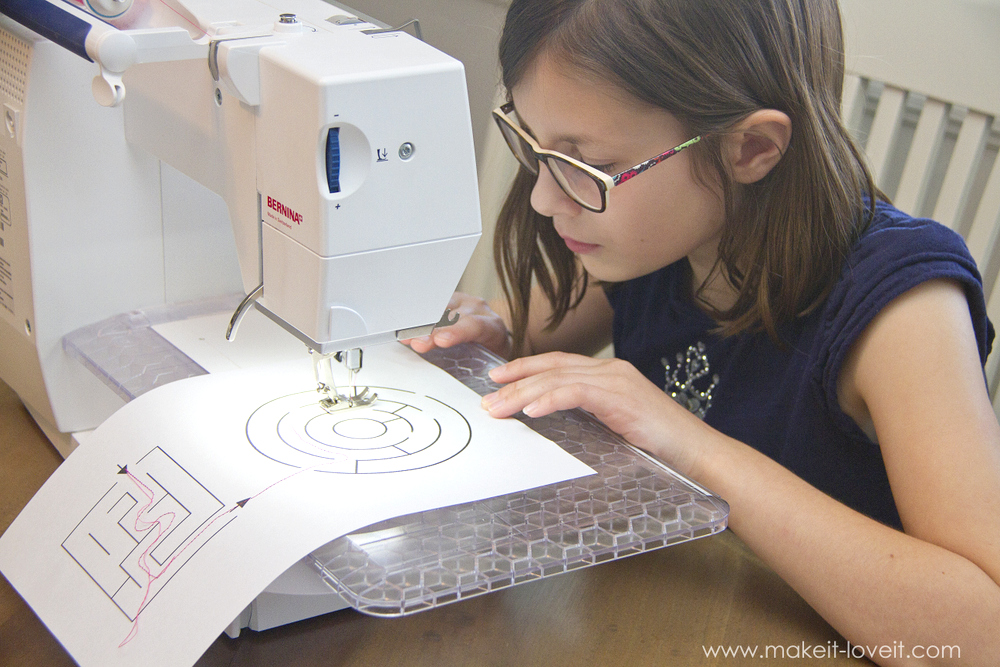 Once last thing that Elli really wanted to do….was free sewing.  And I thought that was a great way to continue practicing her sewing and to become even more familiar with the machine.  And there you have it……a flower. :) 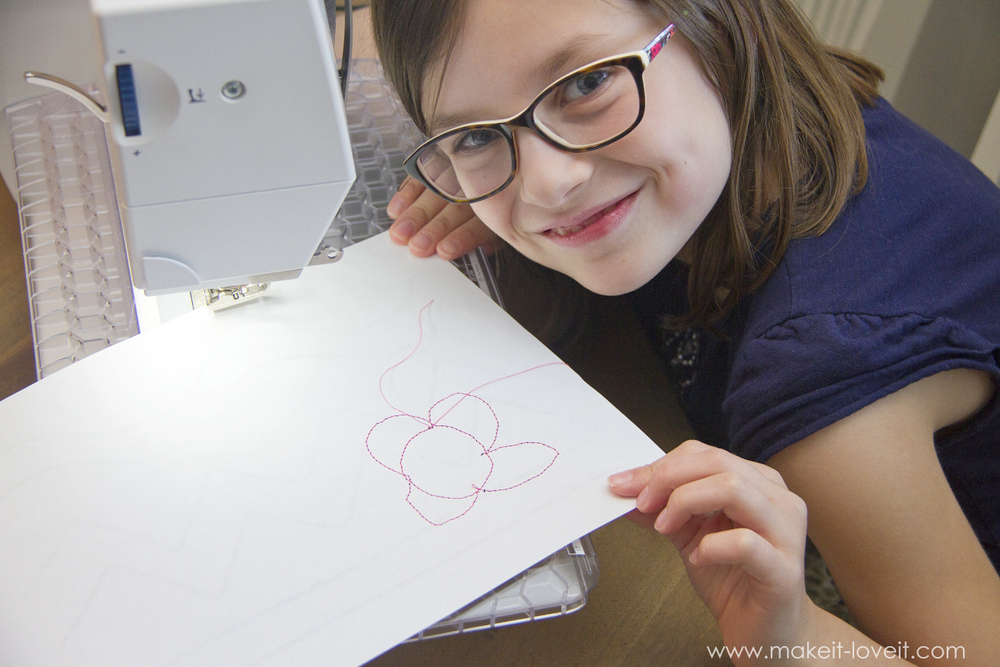 And that’s where we ended the first lesson.  If your kiddo isn’t quite grasping these techniques — repeat until they get the hang of it and feel comfortable with the machine.

Elli surprised me with how much control she had…..and I think she’s ready to move on!  I’ll be sharing what we work on soon, so hopefully that will be helpful to some of you who have been wanting to teach your kiddos to sew! But like I mentioned above, if you’re a beginner and are wanting to learn yourself, these are great lessons for any age to use and practice!

So if that’s you…..stay with it, and good luck!!!  Soon you’ll be sewing skirts, aprons, and couch pillows! :)

To take a few steps back, check out the first few lessons in this “Teaching Kids To Sew” series. 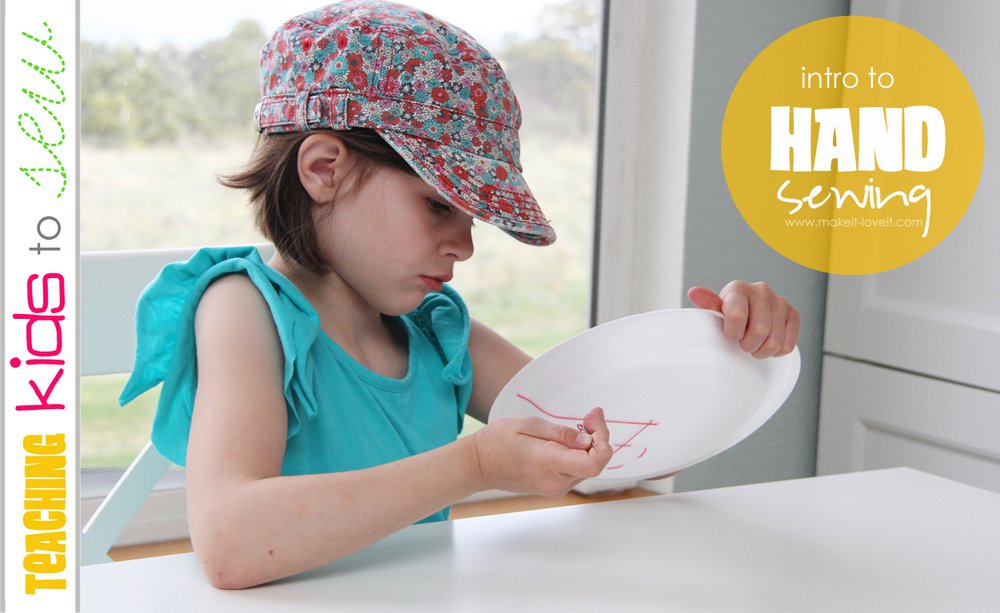 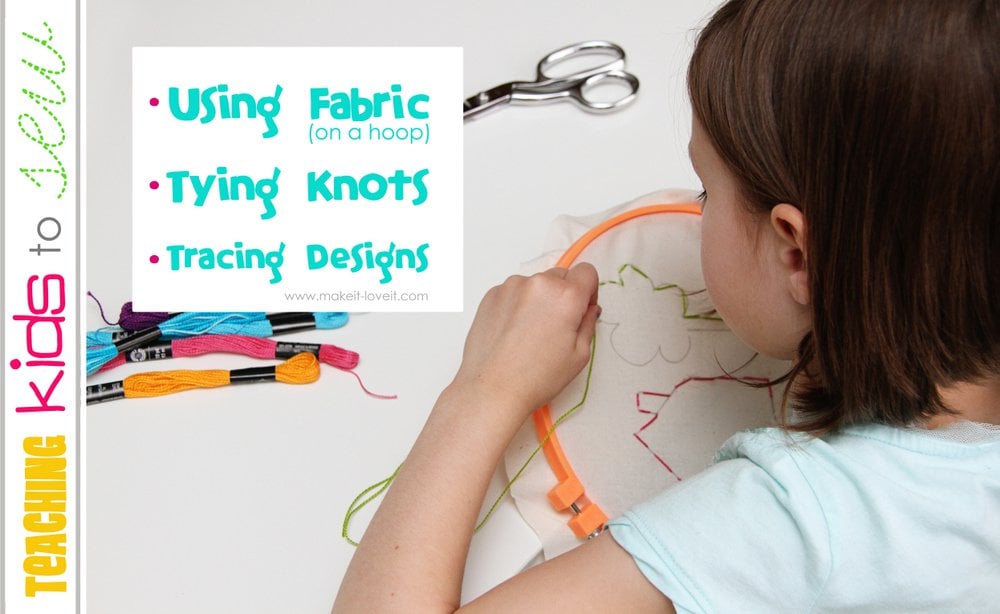 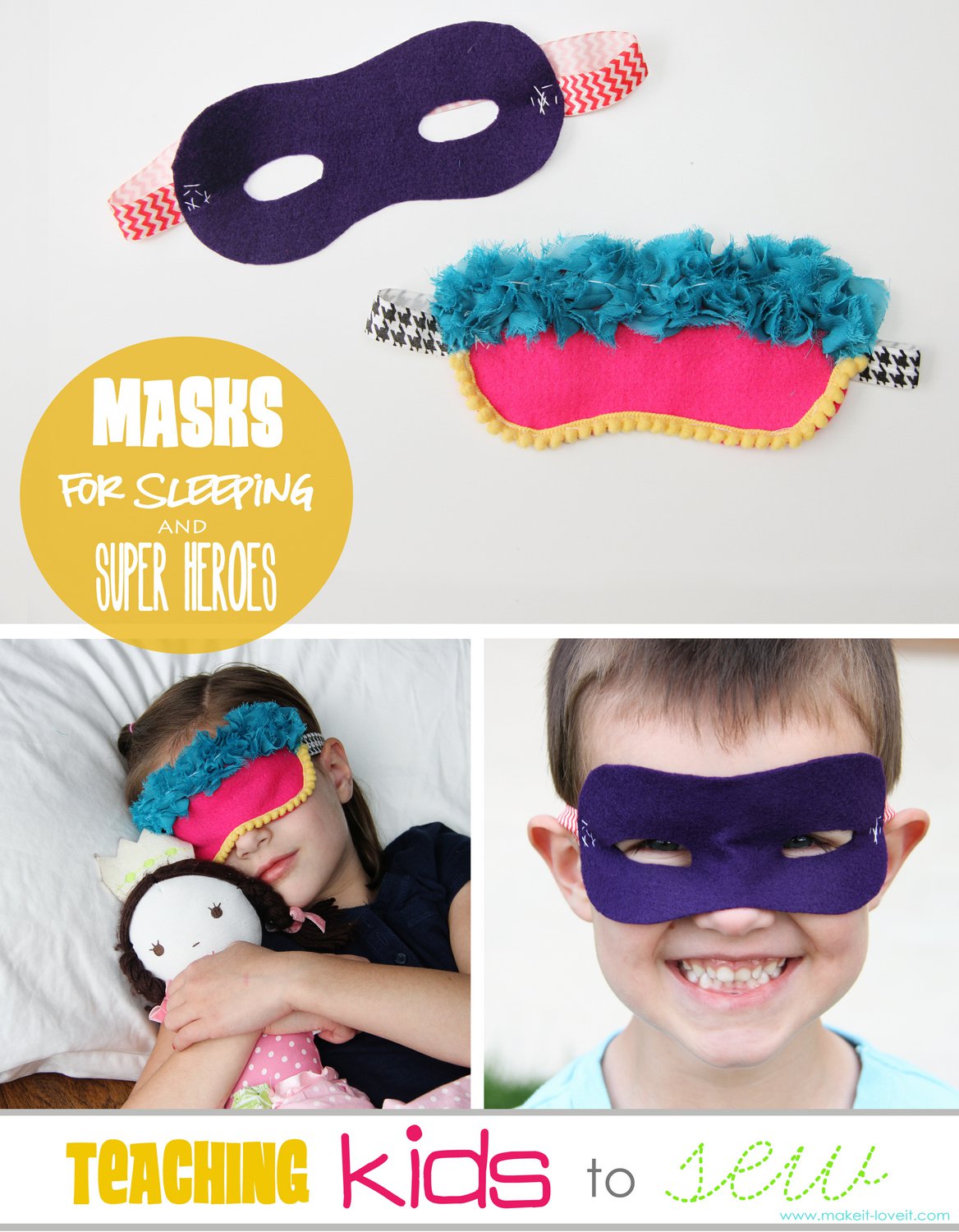 Ashley Johnston is a professional DIY costume maker, sewist, crafter, and owner of Make It & Love It. She is a mom of 5 and a wife to a very patient (with my craft clutter) husband. In case you’re wondering, she always chooses crafting/sewing/designing over mopping/dusting/wiping base boards……but bathrooms/laundry/full bellies are always attended to. Whew!
Author Bio Box by HOI
Author:
Ashley Johnston
Categories:
Mentions:
Not Specified
Keywords:
Teaching Kids to Sew Intro to Sewing Machine
Last Updated:
November 18, 2019 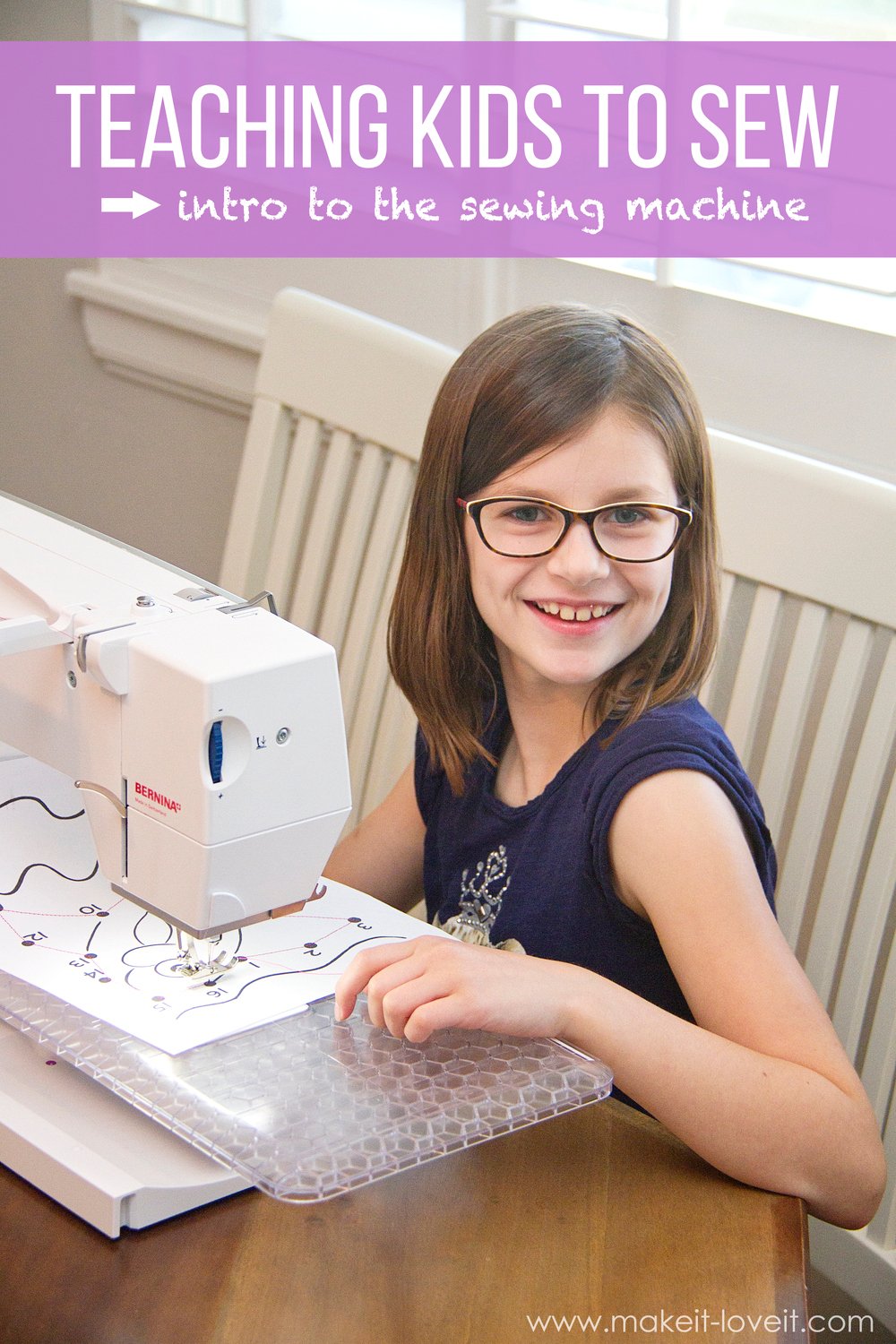 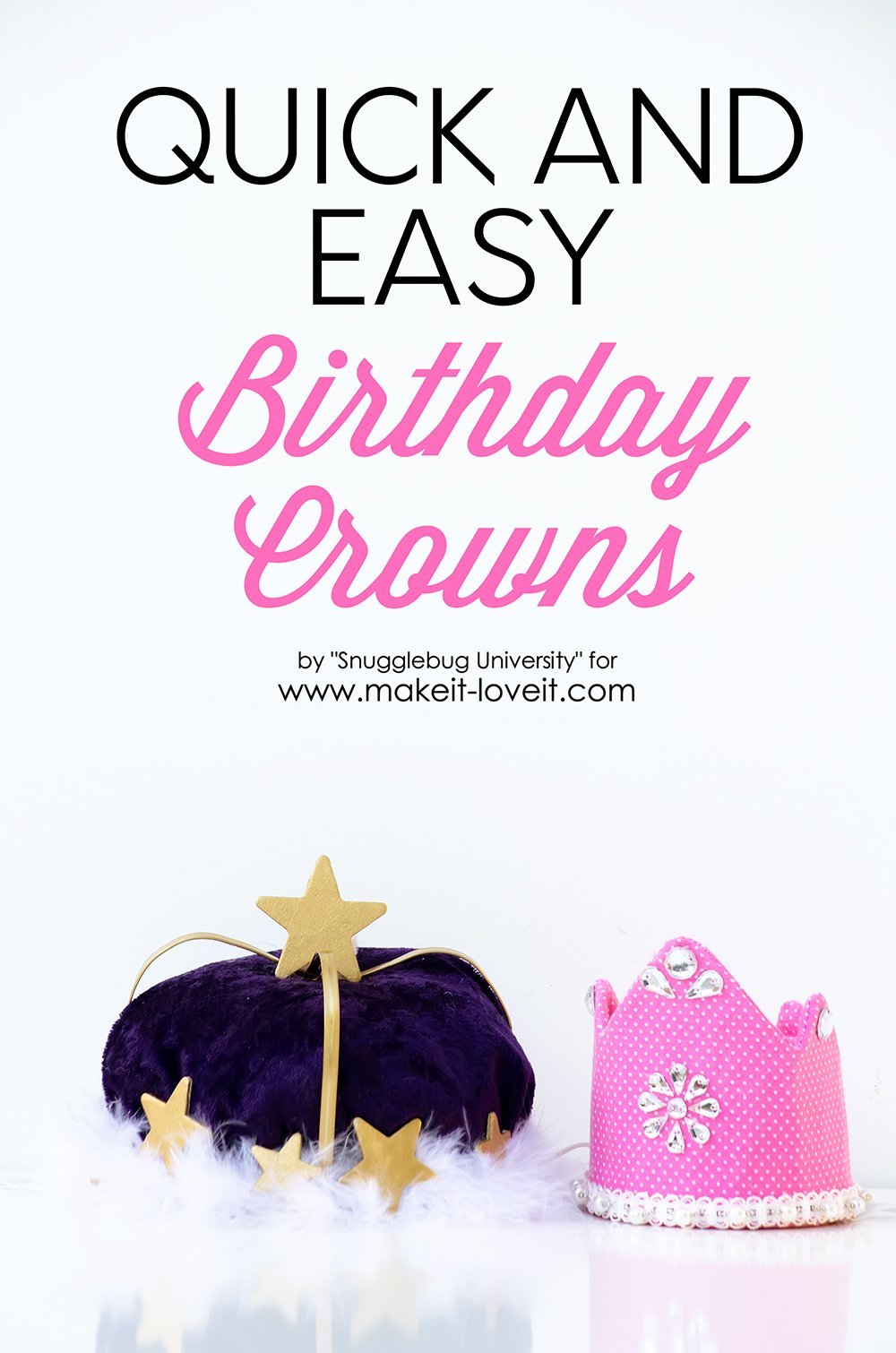 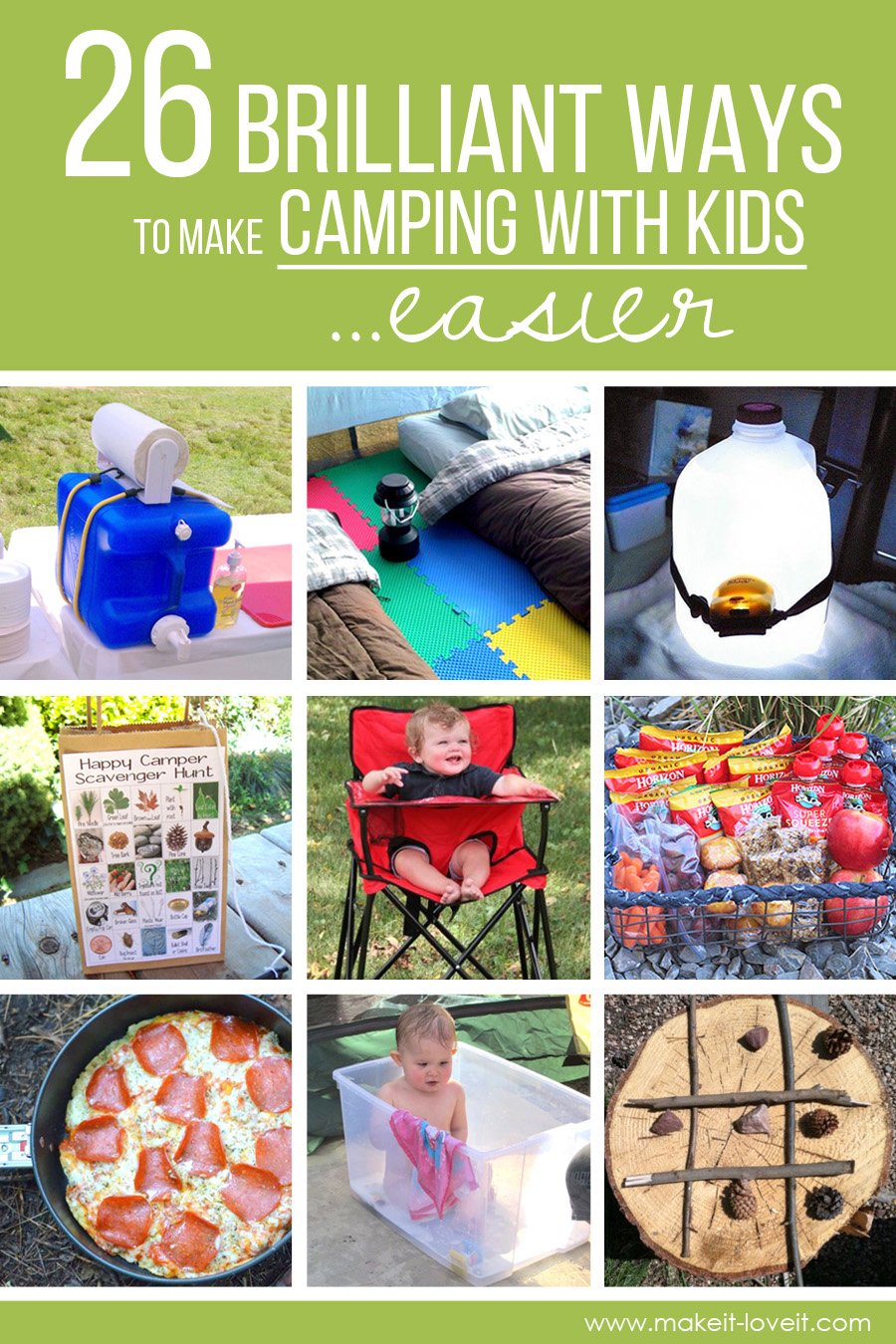 Next Post:
26 Brilliant Ideas To Make Camping with Kids Easier