Home » DIY Tutorials » DIY Holiday » Yesterday’s APRIL FOOL’S post…did I trick you?!! (Also, more tricks I did on my family!)

Yesterday’s APRIL FOOL’S post…did I trick you?!! (Also, more tricks I did on my family!)

Did I trick you yesterday?

Yeah, I know some of you clicked away as fast as you could when you saw those Pre-Stained Baby Clothes.  Yeah, kind of a mess.  However, some of you are moms/dads and completely understand the hassle of baby stains and meal-time messes…….so don’t feel too bad if I tricked you into thinking it was a good idea because hey, anything to lessen the load.  (And hey, that messy shirt was pretty cute matched with that button-up shirt and jeans!) 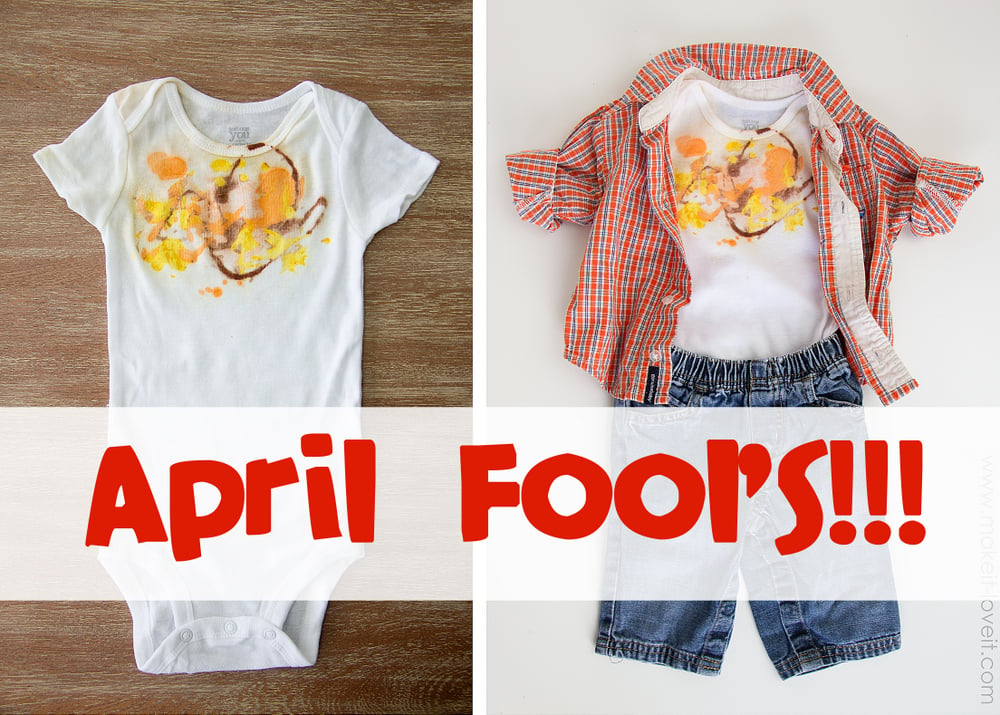 I get some sort of weird satisfaction from pulling pranks though.  Not mean, harmful, or hurtful tricks……..but a new silly trick to try out?  Sign me up!!!!

In fact, I pulled so many silly tricks on my little family yesterday, it was hilarious.  And this is the first year the kids had a lot of fun with it too and they kept teasing and laughing and shouting, “April Fool’s!” after they’d pull a trick.  And yeah, some tricks were very obvious, but hey, I gotta encourage ’em young if I want to mold them into my little tricksters, right? ;)

Anyway, the biggest trick I pulled on the kids yesterday was when I gave them this little snack as an evening treat.  A cup of juice, a bag of chips,  and a few cookies.  Looks harmless enough, right? 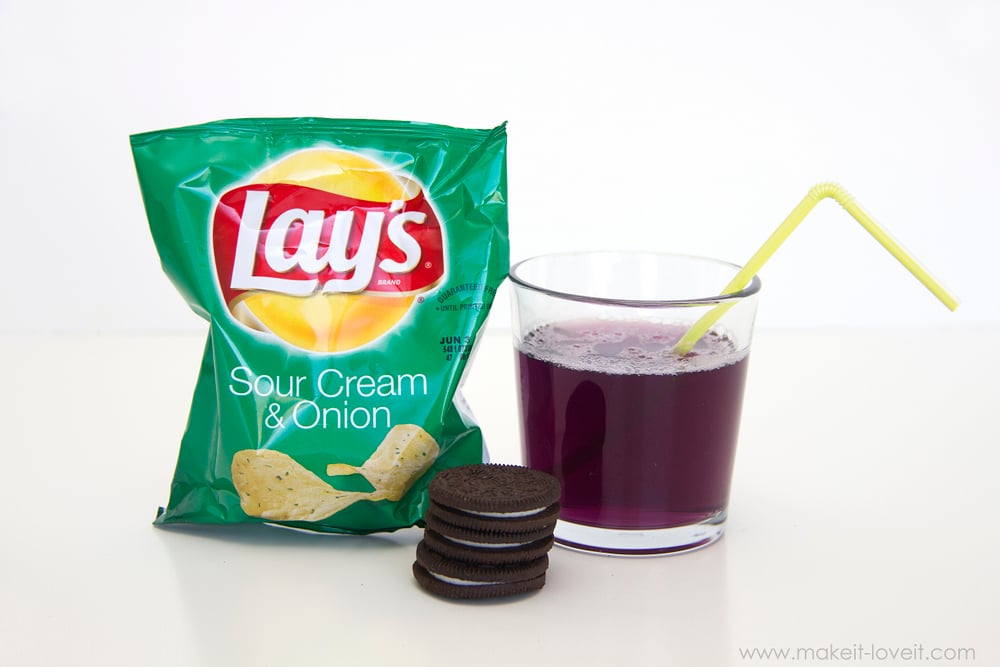 But oooooops, once they took a sip of the juice, nothing would come up the straw.  In fact, the straw was seemingly stuck in the juice……because……..it was JELLO!!!!!  Ha. 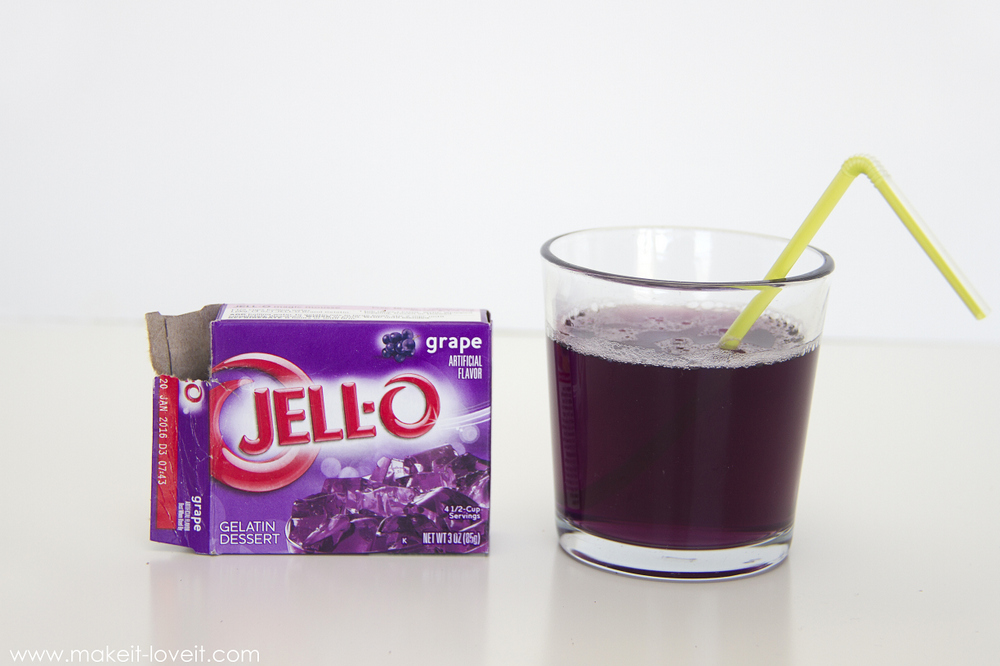 **Make Jello like normal, but pour into clear glasses.  Insert the straw and then let it set up in the fridge like normal.

And those cookies.  Ha.  I offered one to Steve (my husband) at the same time as the kids and they all took a bite of their Oreos. That’s when the foreheads began to crinkle and I could tell their brains were trying to process what was different about the cookies.  The texture seemed right but ewwwww, the taste was intense.  Steve looked at me with disgust and said, “are these bad?  Did you give us rotten cookies?”  Haha……the look of confusion on his face was priceless.  I may or may not have quickly left the room with my hand over my mouth, without having a chance to say a word, and waddled straight for the bathroom from laughing so hard!  (Yeah, a strong bladder has never been a gift of mine!)  This was probably my favorite trick of the day……because it tricked every one of them.  Especially Steve, who LOVES Oreos.  Hahaha…..still laughing from that one. 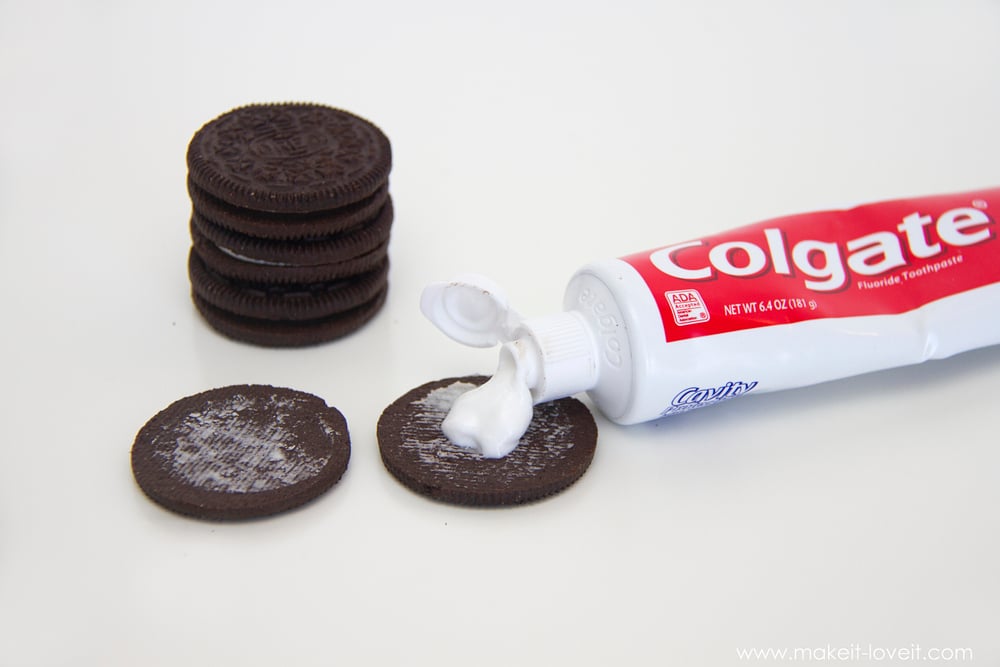 **Just open up some Oreos, scrape out the cream with a knife, place a blob of WHITE toothpaste in the center and squeeze the 2 cookies back together.  (They look exactly the same.)  Place them back in the Oreo container and pass around to friends or co-workers.

The chips.  Oh, the kiddos were excited about their mini bags of chips (a rare treat around here).  But once they opened them up, they noticed the chips were nowhere to be found.  In their place?…..CARROTS!!!  So mean. (Ha……but that Chloe girl, she just started chomping on those carrots, like it was no big deal.  That made me laugh equally as hard!) 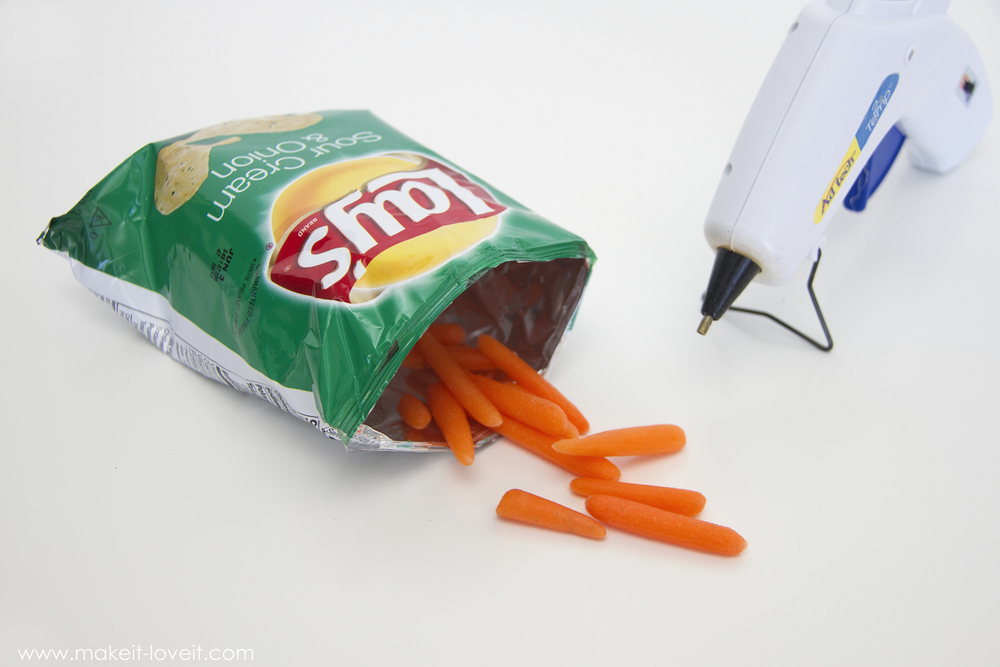 **Open chips from the bottom, dump out the chips (save in a bag for later) pour carrots inside, and use hot glue to re-seal the bottom of the bag.  Actually, if you seal almost the entire bottom closed and then blow some air into the little opening before sealing the rest of the bag shut….it’ll look more puffed up like a bag of chips.

Oh, but the fun didn’t stop there.

My sister Shannon is in town and while watching Connor at soccer practice yesterday, we showed Elli the glue on the hand trick.  You know, where you pour a bunch of glue on your hand, let it dry, and then peel it off like sunburned skin.  I’m not really sure why we taught her that trick…..but she was bored.  And well, her aunt was in town.  And we get silly together.  So, she tried it and it worked!  She then tried it a second time on the back of her hand, but at one point, she made a fist and cracked all of the glue into wrinkly skin.  We were outside and it was a little chilly and so that added to the crackled affect, I suppose.  I told her it wasn’t going to peel now but we realized it really looked like dry, scaly skin.  That’s when the light bulb went off and we decided to trick Steve later on.  When Steve got home from work, Elli showed Steve her crackled hand and told him she didn’t know what was wrong but her hand hurt and was so dry and peel-y.  Being the PA that he is (and knowing that Elli has chronic dry skin), he looked it over with concern.  He did ask her if she got glue on her hand but she shrugged her shoulders.  He continued to examine her skin and that’s when she broke and shouted, “April Fool’s!!”  She was so proud of herself for tricking him! 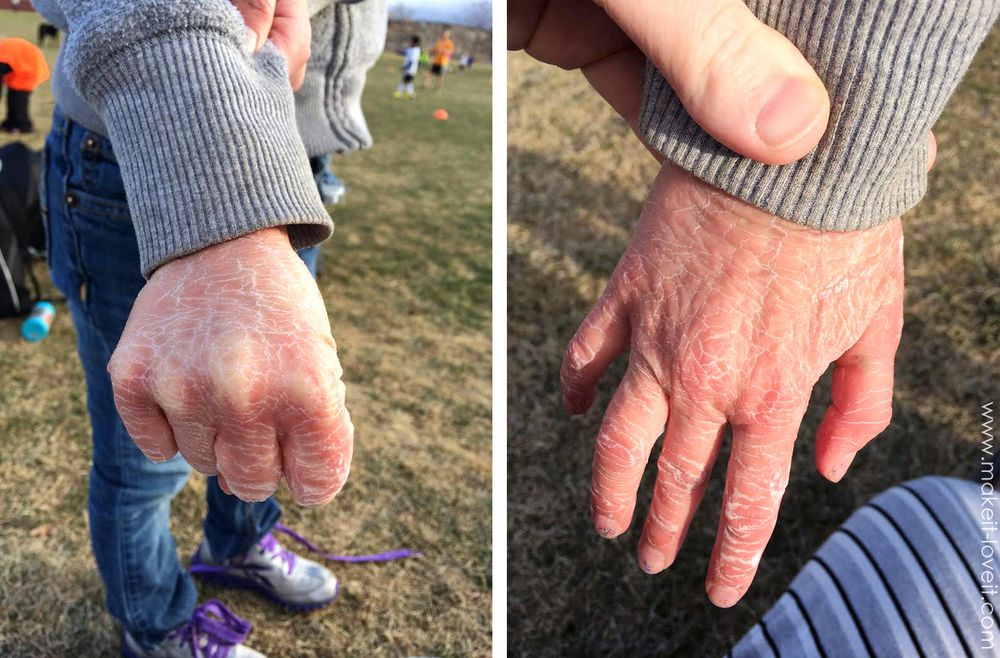 Also, before Steve got home, the kiddos hid strips of bubble wrap underneath rugs and couch cushions all over the house…..so that when he stepped on them, the popping would startle him.  When he stepped in from the garage onto the mat in front of the garage door……he stopped and looked down to figure out what it was.  The kids all burst into giggles and shouted, “April Fool’s!”.  And then they pulled his arm around the house, prompting him to step on certain rugs and sit on certain cushions.  It was really fun for them! 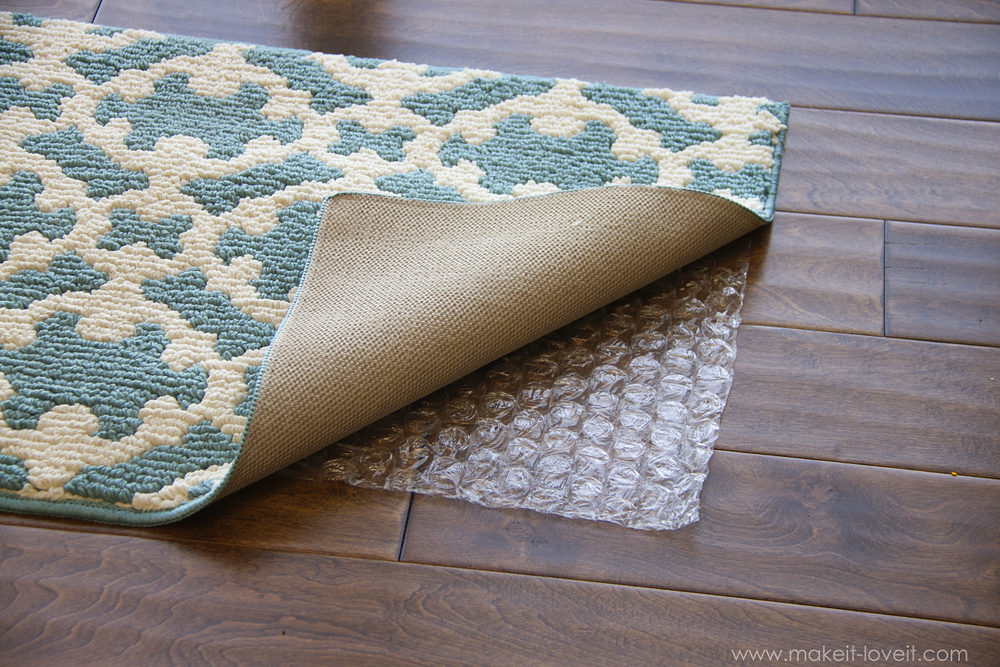 **The bubble wrap under couch cushions didn’t really work.  There was too much cushioning.  But, Steve was a good sport and really mashed his bum into cushions to force them to pop.

Okay, the rest of the tricks were ones that I did…….specifically for Steve.

Before he got home, I took all of the toilet paper out of the master bathroom.  When Steve went upstairs to do his business, he found this little surprise: 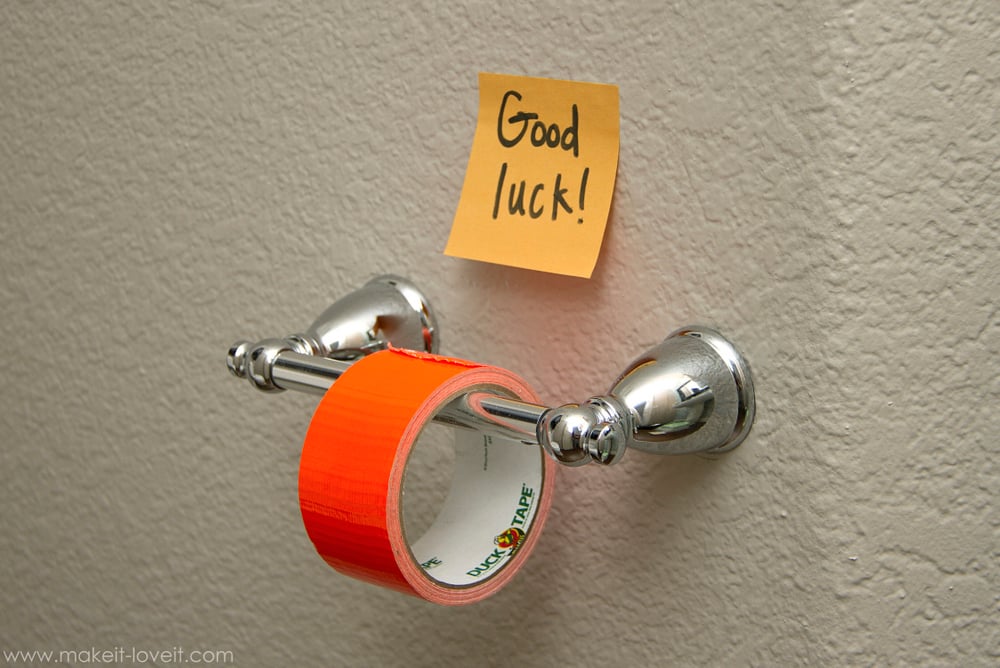 I wasn’t sure he had seen it yet……..but he suddenly appeared at the top of the banister (while I was standing down below, chatting with my sister) and he flung that roll of Duck Tape down by my feet.  He glared at me with his serious/playful eyes and said, “WHERE IS MY TOILET PAPER?!?!”  I laughed and laughed and laughed.  With brows still furrowed, he continued glaring at me and repeated, “yeah, real funny……WHERE IS IT?”  (I placed the partially used roll on top of the bathroom cabinet.  No big deal!)

I was so excited about this next little trick.  Steve uses a ton of soap while showering.  I always tease him that he uses up a 1/2 bar of soap every time he showers.  I blame it on the hair on his chest…..and that it really makes the bar suds up.  Oh, and the fact that he loves to stand there FOR-EV-ER suds-ing and suds-ing and suds-ing.  (Ha….wouldn’t trade you for anything Steve!  Muah!)  Anyway, I completely covered a bar of soap with clear nail polish and then let it dry.  And then when he would try to use it……..no suds.  It would just slip around in his hands because of the clear coat……but no soap would bubble up.  Ha…..hilarious, right?!?! 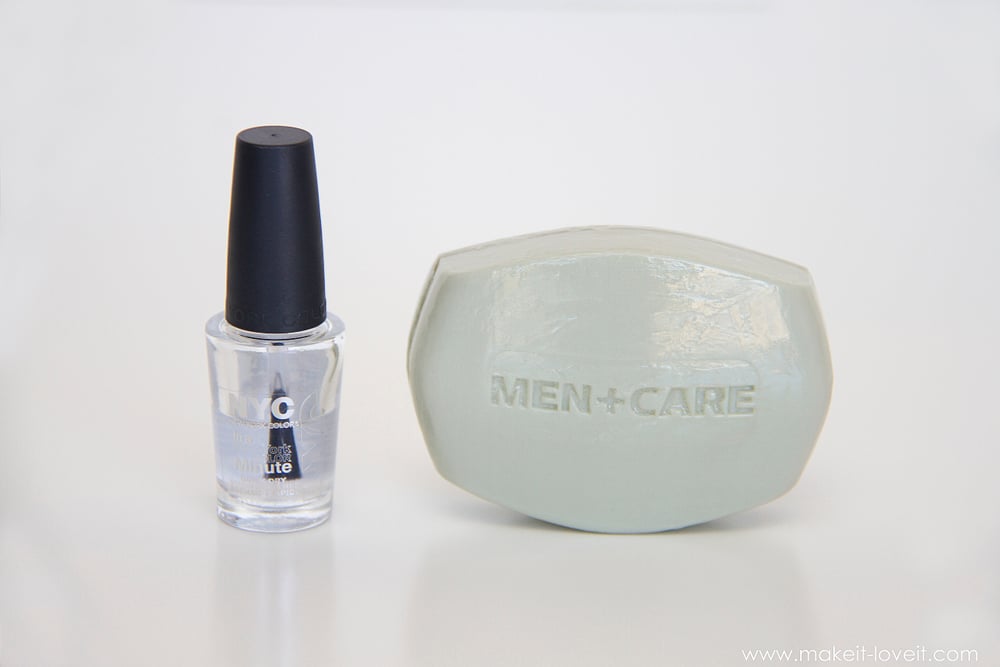 Well, my plan was foiled because I set it on my counter to let it really harden up and dry and after he went to the bathroom (and found the duck tape) he noticed the bar of soap sitting on my counter.  Aaagggghhhhh……..darn!  It was hidden behind a cup and a bottle of medicine but he still noticed it.  I asked him how in the world he saw it and he said that he gets paid to notice small details.  AND, his senses were heightened because of all the other hidden tricks that we’d thrown at him.  Good call.  Darn.  I was sloppy with that one.  (****NOTE: I tried the soap with some water.  The nail polish really seals in the soap.  It would have been AWESOME!!)

The LAST TRICK of the evening…….another good one!  I placed little drops of food dye in Steve’s toothbrush.  You really couldn’t tell at all since the bristles were all different colors (It’s actually not the toothbrush below….it was a different one, with like 3 colors of bristles.)  While adding the dye, a few dribbles of the food dye dripped around the edges of the toothbrush but I just wiped them quickly with a tissue.  Then, I let it sit and dry.  Once he brushed his teeth, it would have become intensely blue in his mouth……..creating lots of confusion. 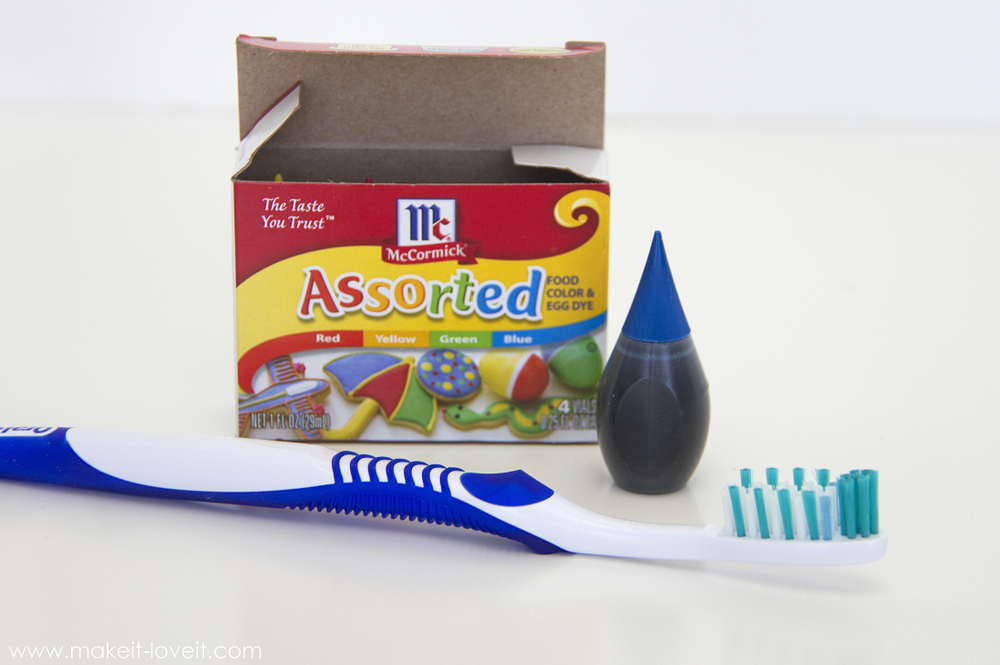 He said, that’s when a little bit of the blue came off on his finger (he must have gotten it wet too) and then he knew right away.  Grrrrr…..another really good one foiled!

Anyway, that was it.  A day full of fun and laughs.

All were harmless tricks and everyone understood it was only for fun.  And that’s really important.

That’s when it was my turn to get ready for bed.

I took my prenatal vitamins and then grabbed my toothbrush, ready to add the toothpaste……..when I saw this: 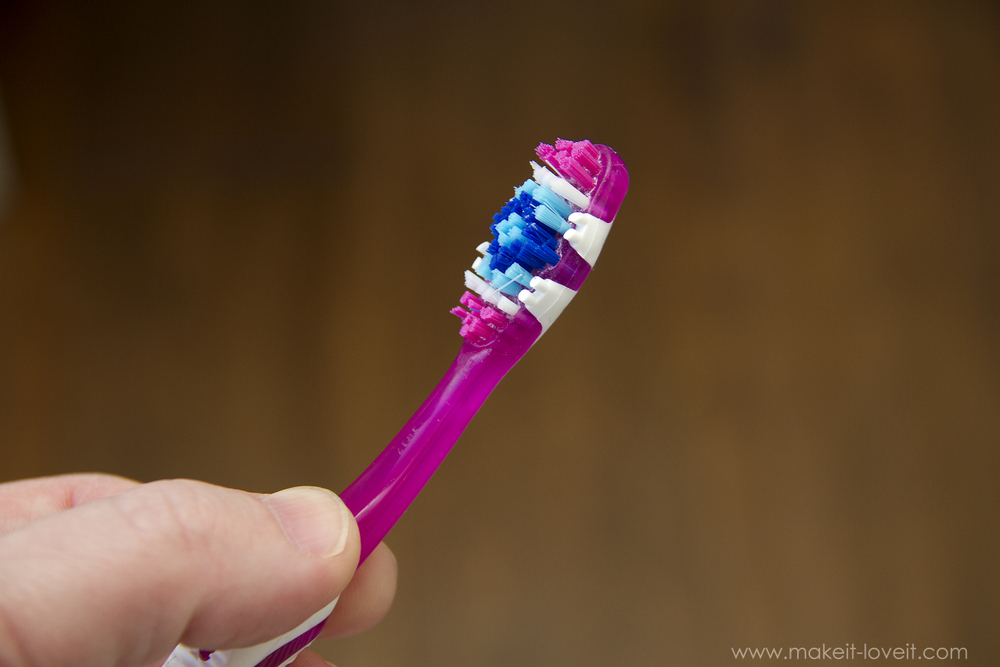 Ha!  He got me!  And chopped all my bristles down to nubs.

That husband of mine was able to squeeze in one little trick on me before the day was over.  And I laughed!  (Good thing that toothbrush was ready to be replaced anyway.)

Anyway, what a funny day.  And I know, seems like a bit much for one day but honestly, once we started tricking, we just couldn’t stop.  And this really has been the first year that the kiddos really got into it and understood the difference between a harmless trick and being mean.  Everyone enjoyed the laughs and Connor and Elli especially enjoyed the planning and the anticipation of tricking their daddy.  Too cute.

And thanks for playing along! :) 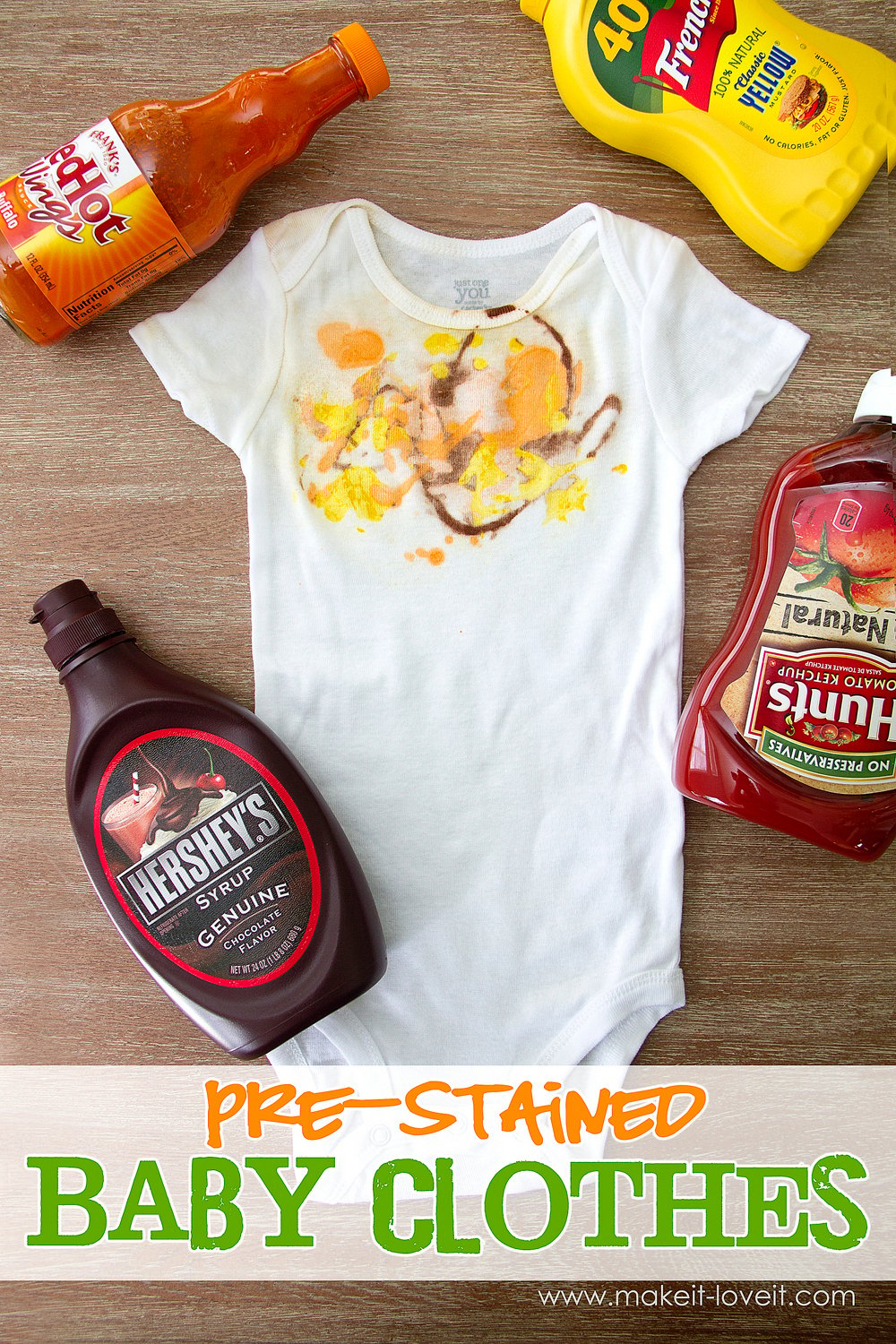