July 28, 2010 - By Ashley Johnston 34 Comments
.
Did you see the winner of the Ribbon Retreat +Fabric?  Scroll down or click here.

How could anyone not love cupcakes?
It’s your own little personal cake…with LOTS of frosting. What’s not to love?

Cupcakes are really great by themselves but I really like the option of adding them to serve alongside a cake.

It’s an opportunity to add more color to the table, like this cake: 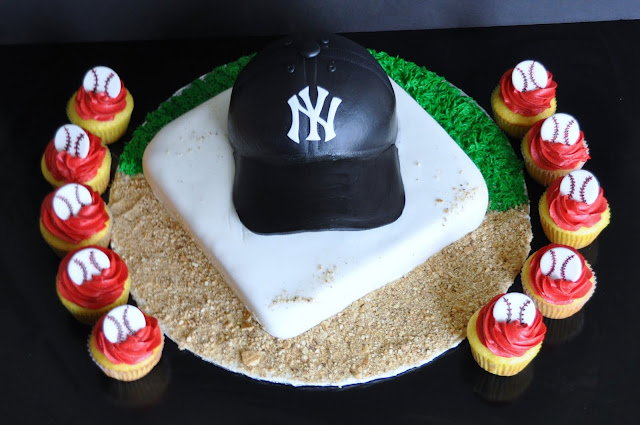 I think the red really helped this cake.

or for a cupcake tree, that are so popular for wedding and showers right now: 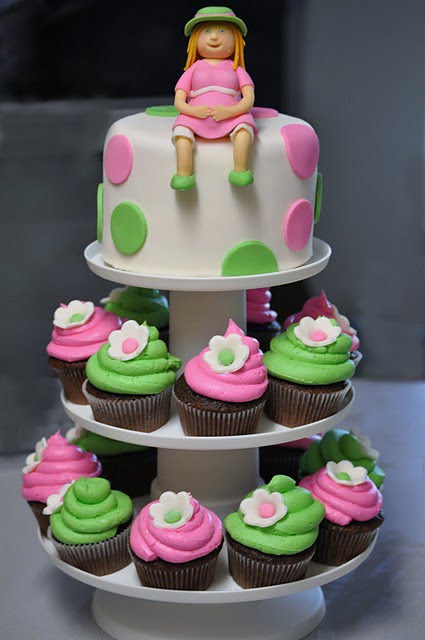 There are so many different things you can do with them.

Buttercream or fondant? Filling or glaze? Blue or yellow?

Not to mention the cute liners you can get these days. 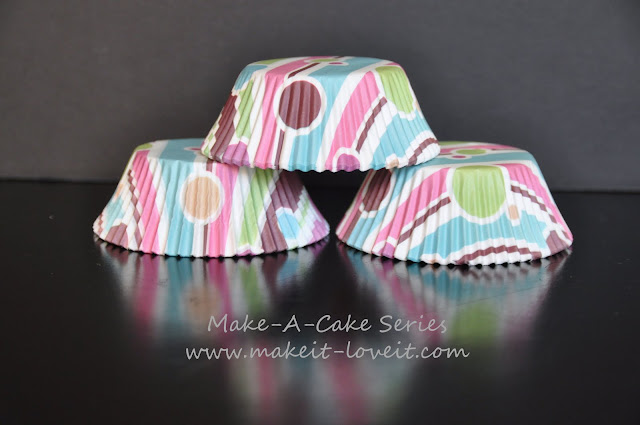 There are a few tips that work for me that I want to share.

Here are some of the supplies: 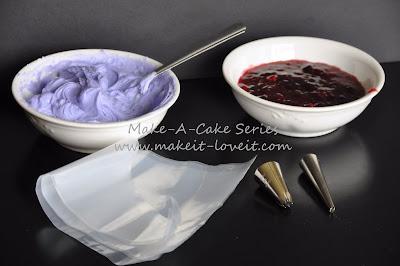 1. Buttercream –see recipe below
2. Piping bags
3. Jam
4. Piping tips
Many of you have asked for my buttercream recipe.
I haven’t ever included it because I do not use my own recipe. I use the Wilton recipe.
Here it is, but know, that it is not my own.
Buttercream Frosting

Cream shortening with electric mixer. Add vanilla and milk. Add sugar, 2 cups at a time.  Scrape sides and bottom of bowl often. Keep icing covered with a damp cloth until ready to use. For best results, keep icing bowl in refrigerator when not in use. Refrigerated in an airtight container, this icing can be stored for 2 weeks. Re-whip before using.
YIELD: 3 cups 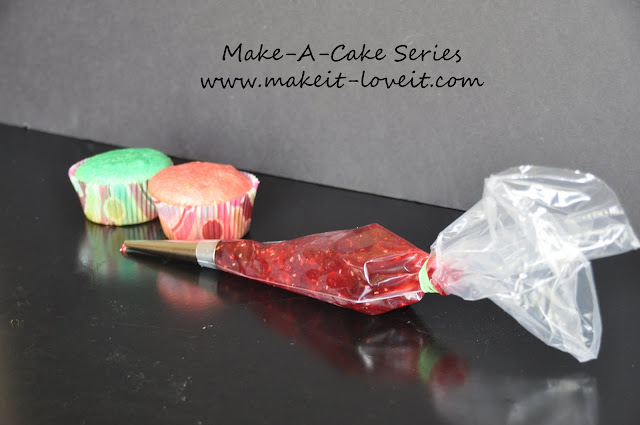 Bake cupcakes.
Cut tip off of piping bag and drop filling tip into the bag and fill the bag with any type of jam you like.  Insert the tip halfway into the cupcake and squeeze a small amount of jam into the cupcake. 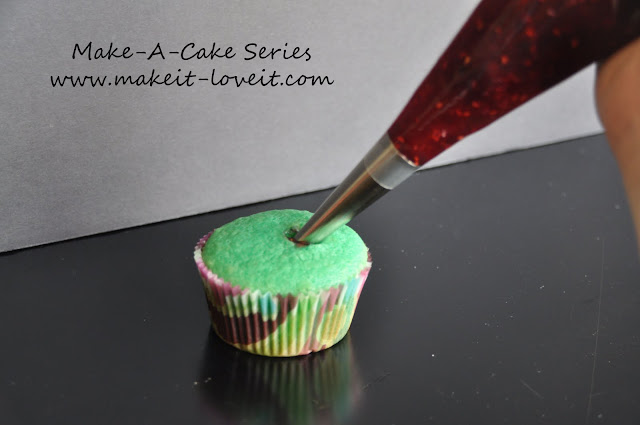 **Tip– you can use any type of filling you want.

Now you have a sweet fruit surprise in your cupcake. 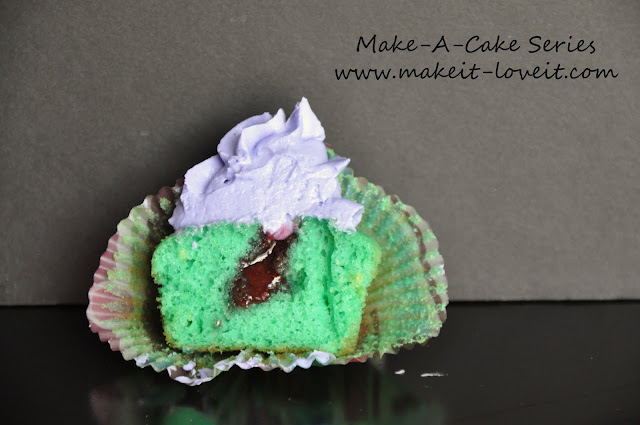 Topping your cupcakes with a buttercream swirl. 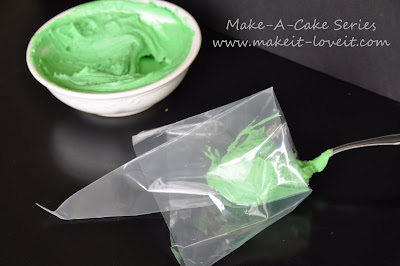 To put a swirl of frosting on a cupcake, use a 1M tip. 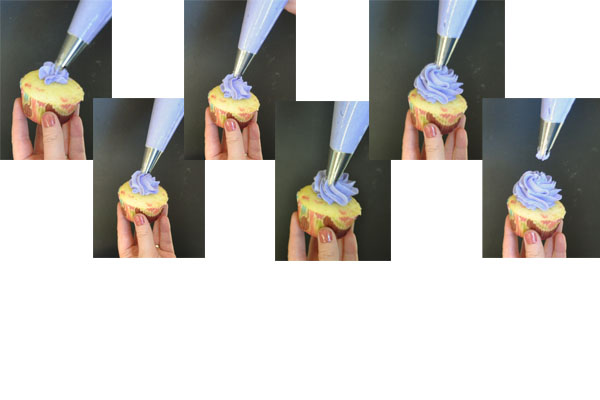 Don’t they look ready for a party? 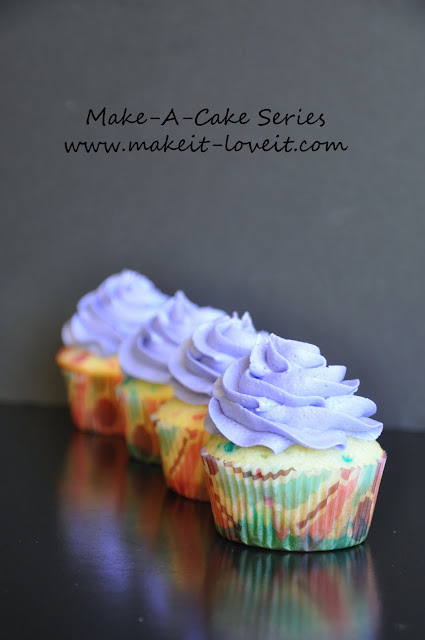 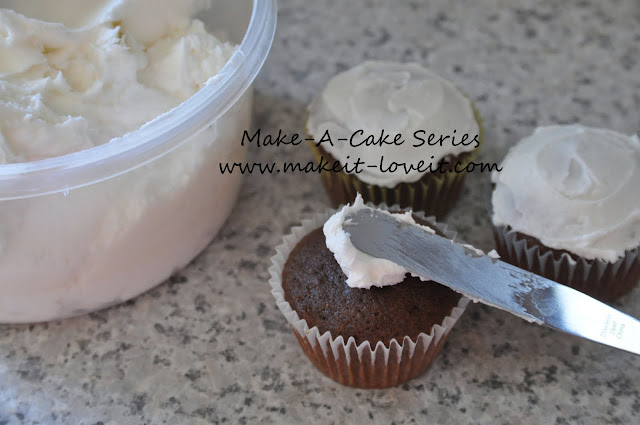 Roll out your fondant and cut out a circle that fits the top of your cupcake.
I used the smallest circle cutter from the same set I used in the Flag Cake post.
(Fondant tutorial here.)

Place the circle of fondant on top of your cupcake and work it with your fingers to smooth it out and get it to fit to the edges. 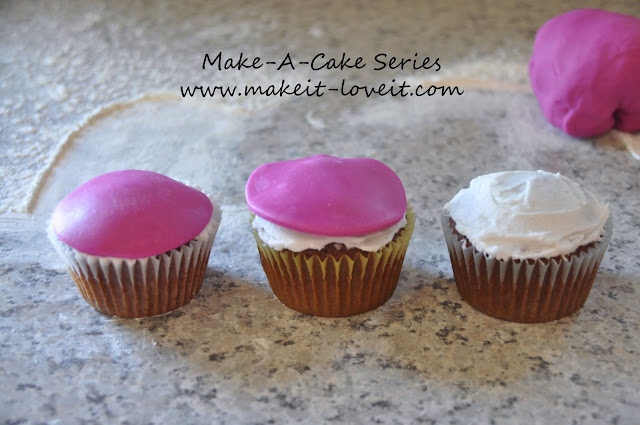 I just piped a dot border and cut out fondant flowers for the top. 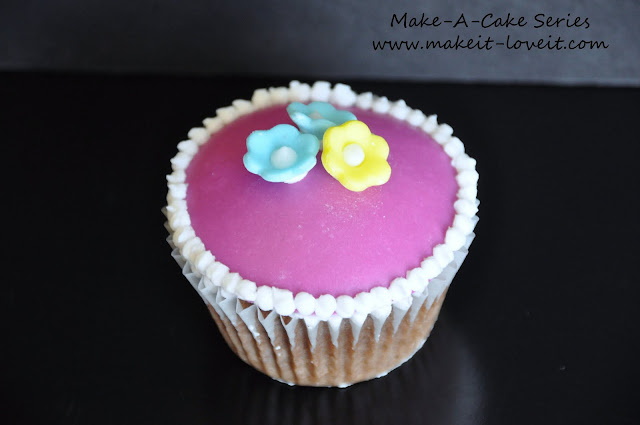 Now you are ready with some new tricks for your personal sized cakes! 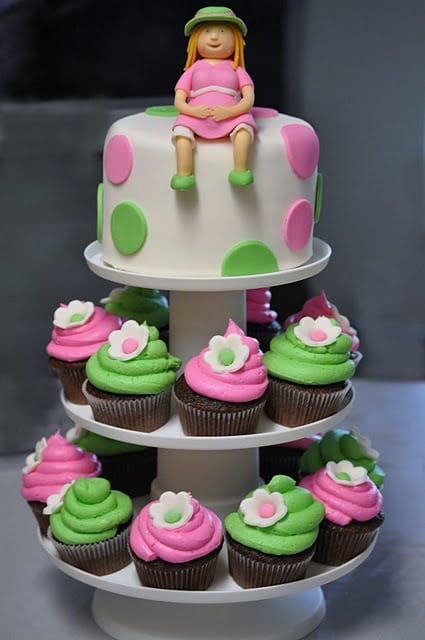 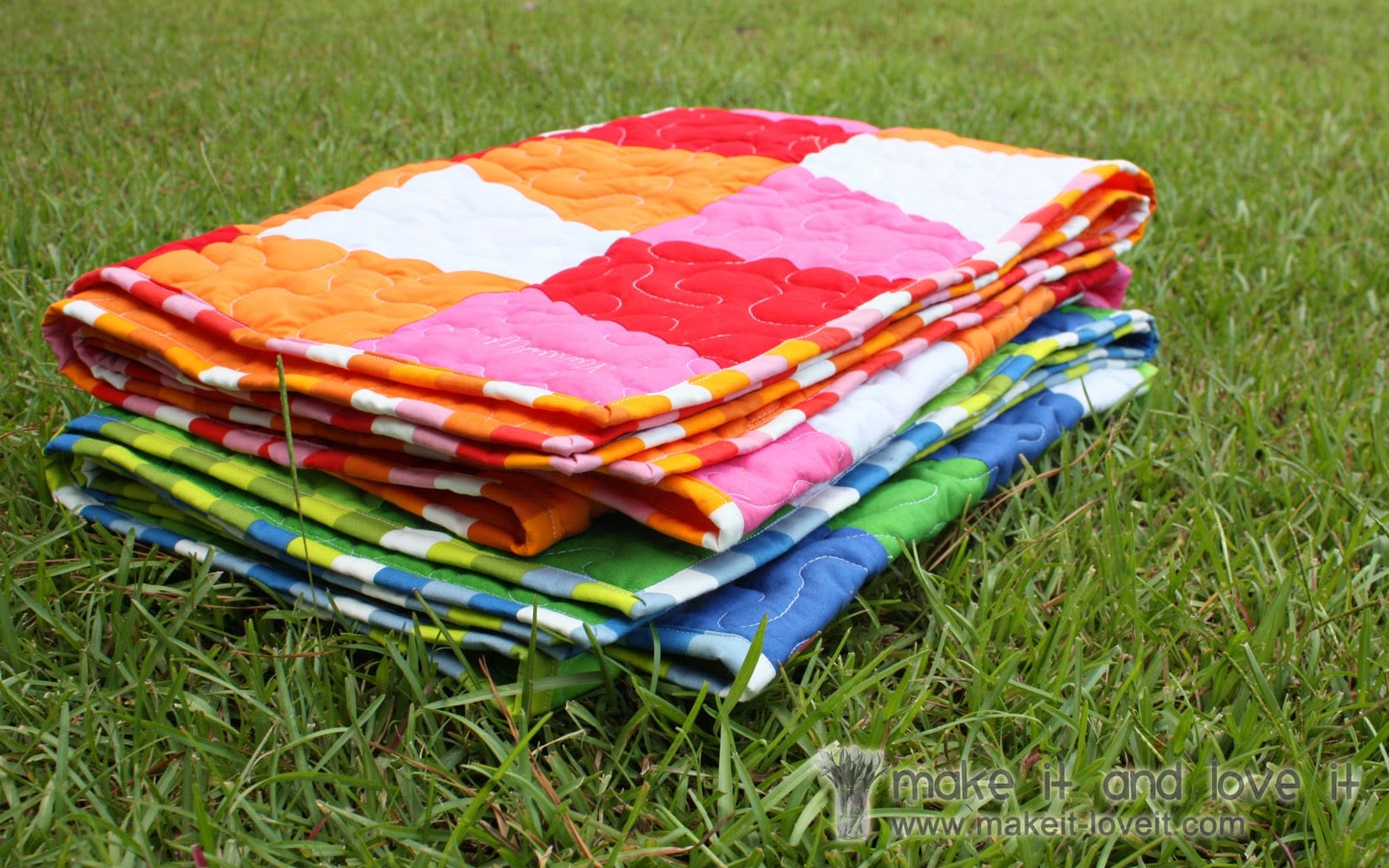 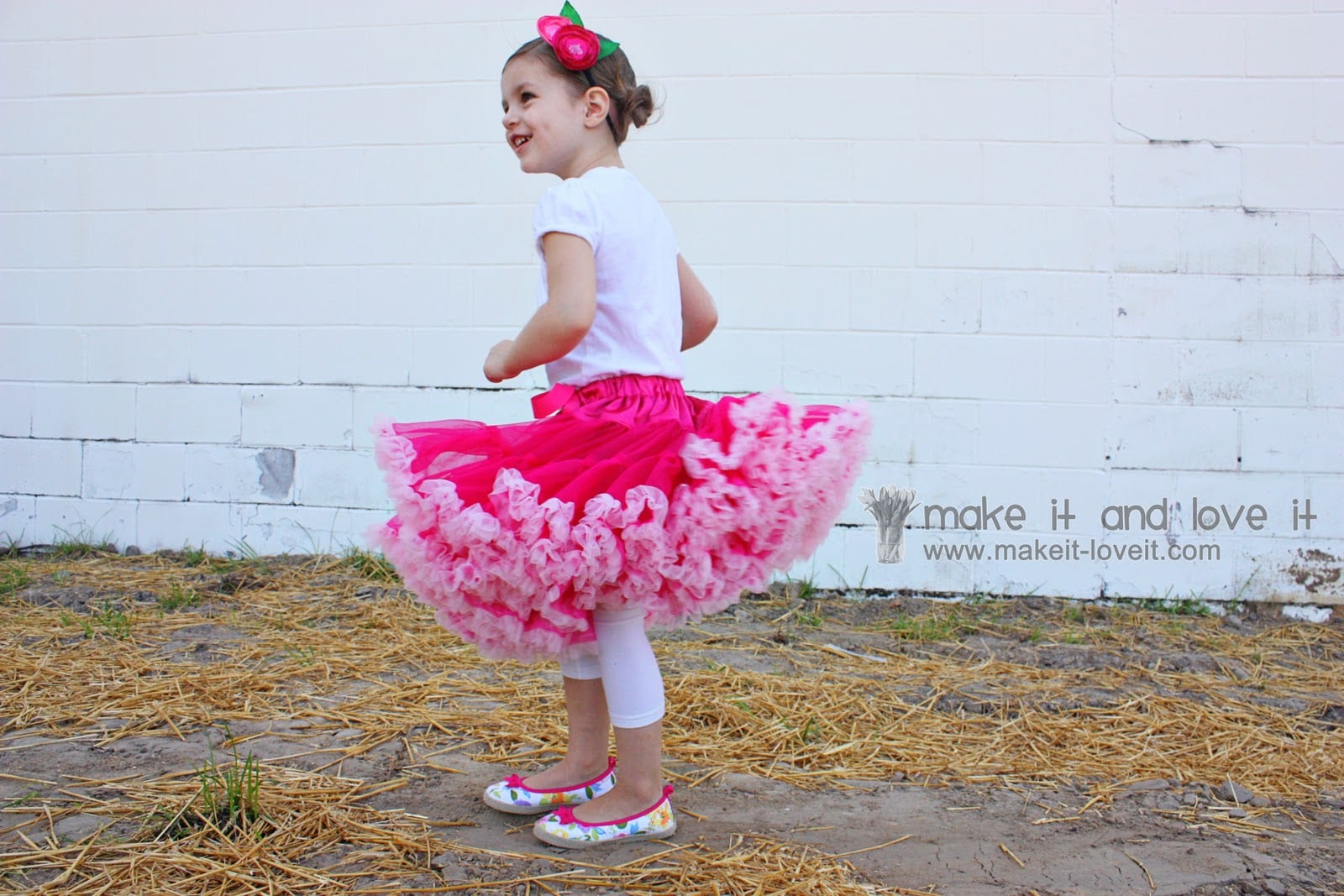