Home » Family » Another School Year…..and how I made my kindergartener cry! {Boo.}

Another School Year…..and how I made my kindergartener cry! {Boo.}

I’m still working out the Email RSS feed kinks.  Are you seeing any pictures today?  I’m crossing my fingers because all of this coding stuff is so tricky.  I don’t like emails or feeds without pictures either, so I’ve been trying to get them back in.  But this darn technology has been fighting me hard! :)  Any better? (Crossing my fingers…)

Connor and Elli were so excited to start school yesterday.

Connor was most excited about his “new orange shoes” and Elli was over the moon about eating lunch in the cafeteria.  Oh, and having TWO recesses!!!! 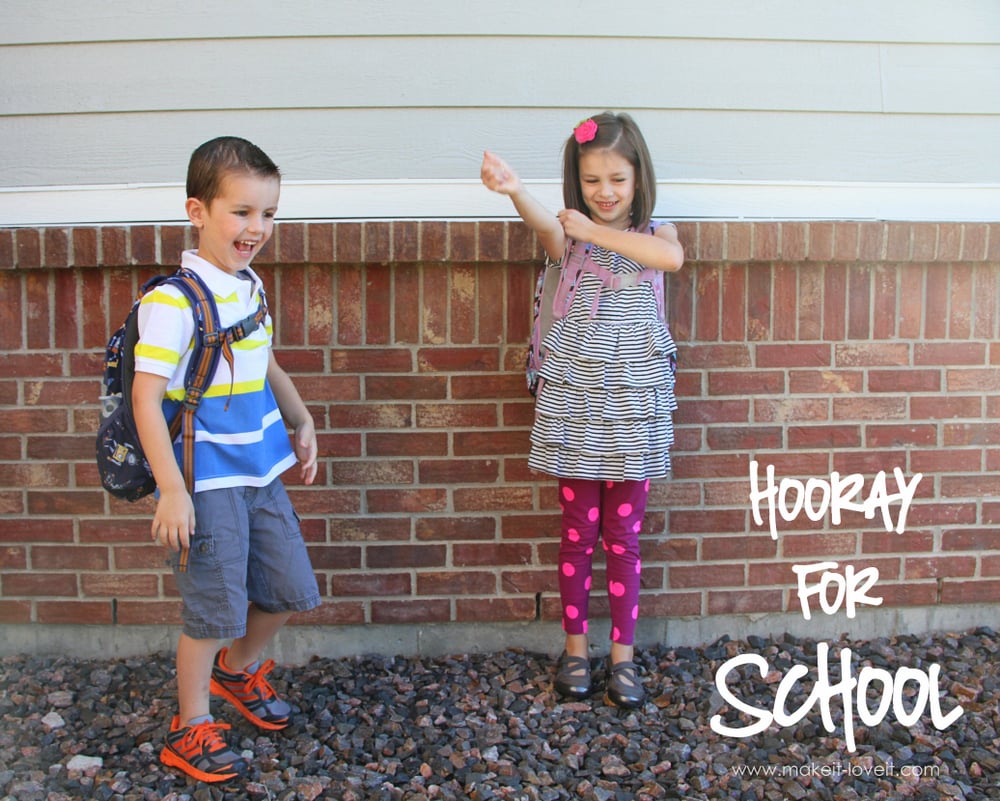 Sunday night, we started laying out school outfits, packing lunches/snacks, finding socks, and packing back packs.  And that’s when I realized, “wait, where are the backpacks?!?!”  I didn’t buy the kids new backpacks this year because their bags from kindergarten (and preschool) last year still looked awesome and weren’t tattered or thread bare at all.  (Which, secretly, I was kinda bummed about.  Buying new backpacks is part of the fun of starting a new school year, but I just couldn’t justify tossing aside these darn bags for new ones.  I guess I gotta buy cheaper next time, so that they’ll wear out before another year starts.  Ha!  Totally the kid in me talking and, I know, makes no sense at all!)

But since these were old bags, they had been used all summer for stuffed animal hideouts and Lego totes.  But dang it, “where are they?!?!“

Connor and Elli searched.  And searched and searched.  And then I searched with them.  Upstairs and downstairs, in the garage, out in the car, under beds, in closets, etc.  Finally, they appeared.  One was behind a dresser and the other on top of a shelf under a toy car garage.  Yeah, I asked the same question you are right now, “how’d they get there?!!“

Anyway, we loaded up bags and placed their clothes on the floor, right next to their bed…….and they were off to bed.

In the morning, they both woke up with giant smiles, anxious to head out the door.  Elli is usually a bit more anxious about uncharted territories and since we moved away from her last school, this school thing was all new again for her. (Remember last year when Elli started kindergarten?  She was a nervous little Nelly.)

Connor adapts pretty well and I just wasn’t as worried about him.  I knew he’d jump right in with both of his little orange shoes on! ;) 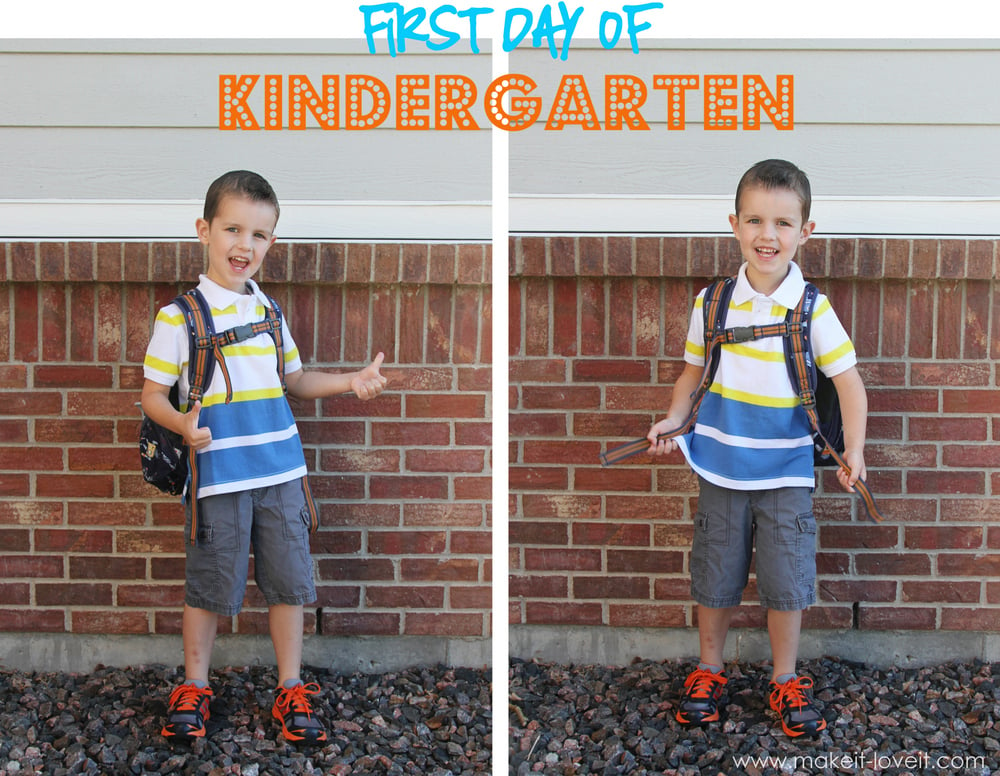 When we arrived at school, I helped Connor find his kindergarten line and knew we had about 15 minutes before parents would walk with their kindergarteners into their new classroom and help them get situated before leaving.

So I began searching the crowds for Elli’s 1st grade line.  I knew she would just be dropped off and would then walk inside the school alone, with her teacher and classmates.  However, we couldn’t find her line.  Steve doesn’t work Mondays, so he was there with us but Chloe was a little sick so she was in the stroller.  It was hard for him to weave through the crowds with her so I held Elli’s hand as we looked for her teacher and class line.  I kept looking back at Connor’s line, making sure they weren’t leaving yet while we were looking and could see Connor just standing there with his classmates, ready for the minutes to pass so he could start this whole school thing.  So, I didn’t worry much about him as we walked a bit further away, trying to find Elli’s line……..when, we finally spotted it.  Way at the other end of all the other class lines.  So, I helped her get in line, gave her 17 or so kisses, told her she’d fly like a bird that day, and told her I couldn’t wait to hear how her day went when I picked her up later that day. 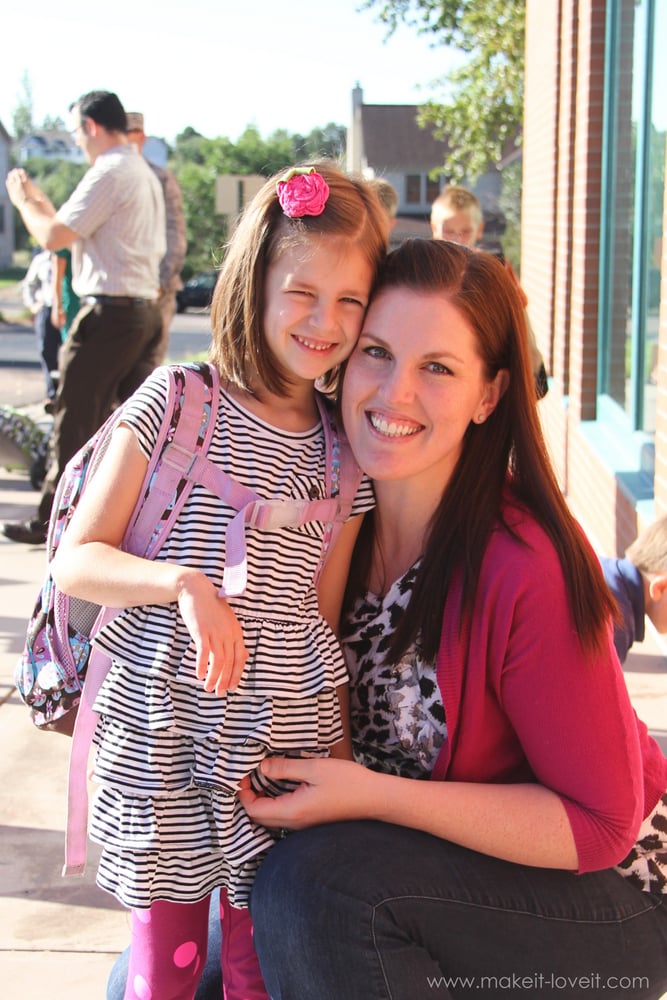 She gave me a nervous grin and continued soaking in her surroundings.  Steve finally made his way over to us and stood nearby, helping her to not feel so alone until the bell rang. 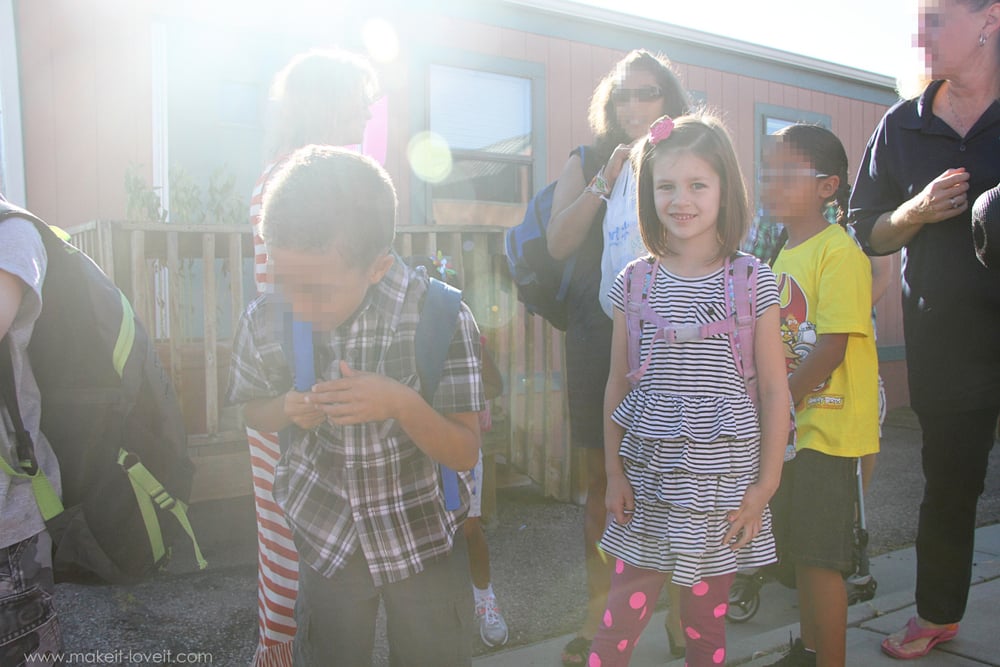 Meanwhile, I headed back to stand with Connor.  Once I found him, his little heart was broken.  He had melted into a puddle of tears, so scared that I had left him there alone.  Dang it, dang it………BAD MOM.  Who leaves their sweet little kindergartener standing there alone, on his first day of school???  Uggggh.  Even though there was another little girl and her mom right there (who we are neighbors with and know really well….thanks Nicole!!), he became suddenly overwhelmed by everything going on around him, and his heart sunk.  And you know elementary schools on the first day of school…….they’re complete chaos.

So, I squeezed that little guy to death, told him about a trillion “I’m sorry’s!“, and then grabbed his 5-year-old hand and told him I’d hold it all the way to his classroom and would stay in there with him until he was all settled (which is what they instructed us to do). 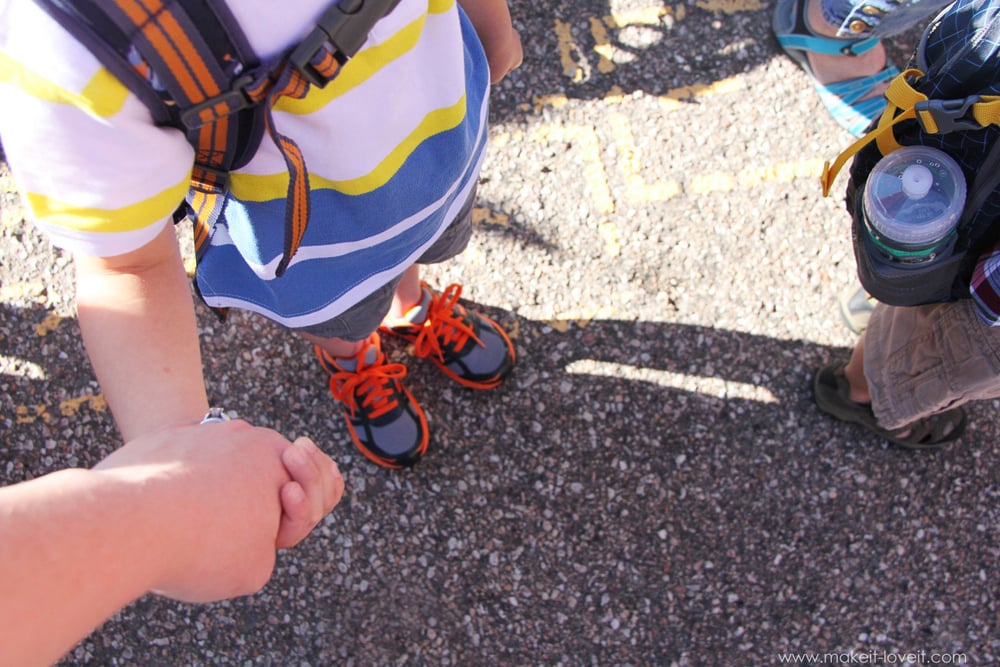 Then, because this is what I do when I goof up, I changed the subject and started trying to make him laugh about something completely different.  It worked.  And we were back on the “super excited” train!  Whew.

Once all the students and parents filed into the classroom, his teacher made some intros, read the class “Mrs. Bindergarten goes to Kindergarten”, and then asked the kids what they should do about their over crowded classroom (aka: too many kids/parents all squished into one room).  The kids gave some ideas and then she guided them to suggest that maybe if all the parents left to go to their “meeting”, they’d have more room to play.  Perfect.  Connor looked back at me and gave me the ‘thumbs up’ as they ushered us to the library to fill out some forms and enjoy some fruit and bagels.  Totally impressed.

While there, I texted Steve to ask about Elli and he said she did just fine.  That yeah, she looked nervous but she followed right along and was totally fine.

Anyway, I totally UNDER estimated Elli yesterday and OVER estimated Connor.  I kept thinking about him while he was away at school, and worried all morning that I had somehow ruined his first day.  You know that whole mommy guilt thing?…….it’s AWFUL!  However, when I picked him up from his half-day of kinder, he had his huge confident Connor-smile plastered on his face as he bee-bopped right over to the car.  As he climbed inside, I asked him how his day went and he told me in his regular ol’ chipper Connor voice, “it was so great mommy!”  And then he continued to explain, “I made a new friend but can’t remember his name but I played with him on the playground and sat by him in class and ate my snack and oh, yummy, thanks for that surprise fruit snack, that was so funny ((insert happy giggles))…..but we got to play with toys today too, not just learn stuff, and we played with some blocks and read stories and oh!…….did you know there is a girl in my named Ella?  That’s just like our Elli but it’s Ell-A!”

I laughed as I tried to keep up with all of this first-day-of-school-data that he was rattling off to me and then asked him if he was nervous or scared after I left and he quickly said, “Nope!  Not even one little bit.  I’m never shy mommy……..I was just fine!  I played and played and played today and I wasn’t even one bit nervous!”  (I’m not even kidding…….that’s pretty much verbatim of what came out of his mouth.)  I laughed and grinned and even cried a bit as I listened to this kid talk and talk and talk……..all the way home.  And that’s when I let out a huge sigh of relief.

I’m still a total rookie at this whole parenting thing but once these guys are like 53 years old, I’ll totally have it down.  Or something. :)

I think every start to a new school year will be a mixture of emotions for me.  I tell my eyeballs not to well up with tears on days like yesterday, but I can’t help it.  My 2 oldest are now in school and are creating good habits, learning fundamental skills, making new friends and are figuring out to make their own decisions in this great big world.  And you know, I’m just grateful they still let me watch and cheer them on.

Anyway, another year has begun.  Best of luck little chickies…….you’ll both do great! 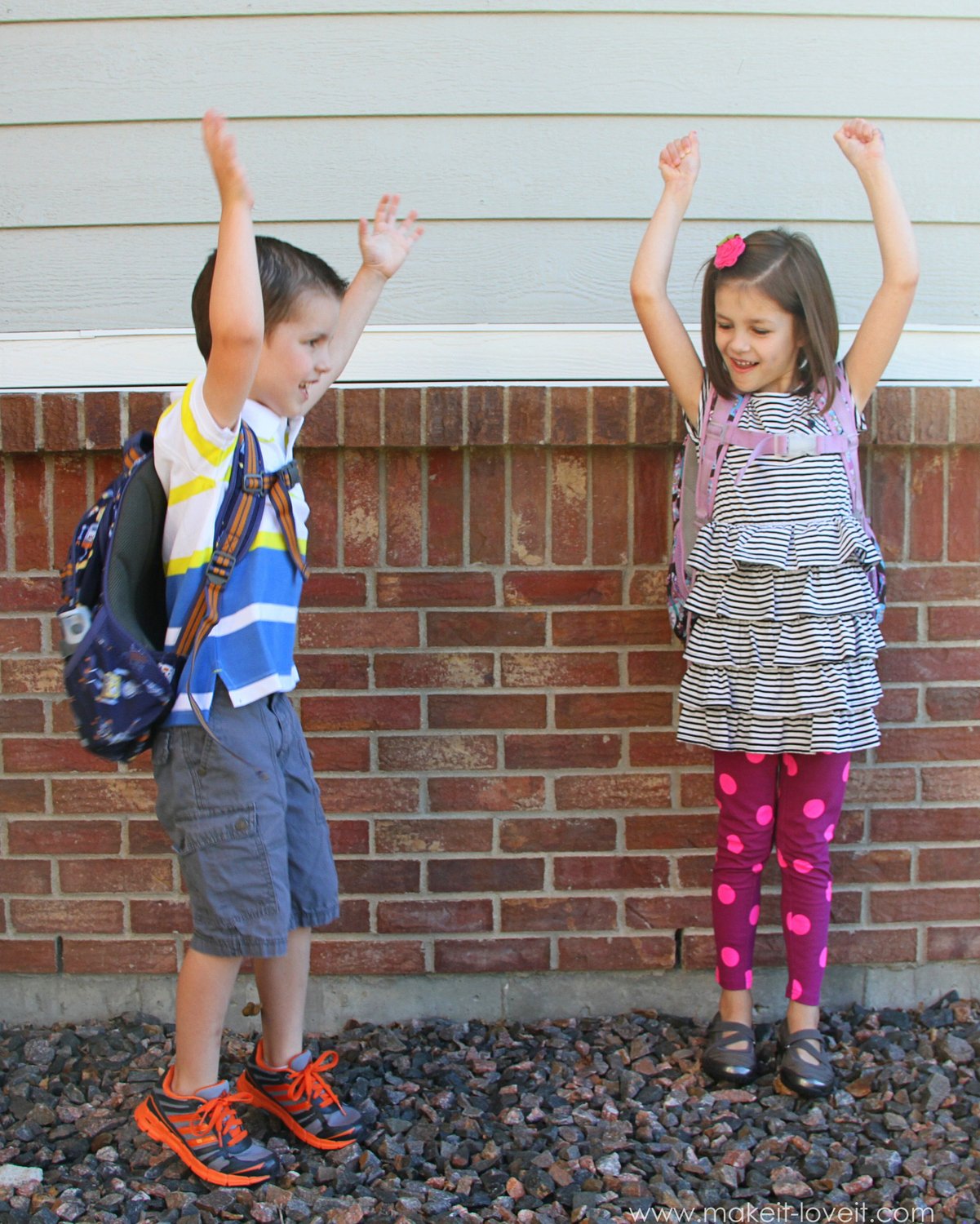 How was your kiddos’ first day of school?  (Anyone else make their kindergartener cry? ;)) 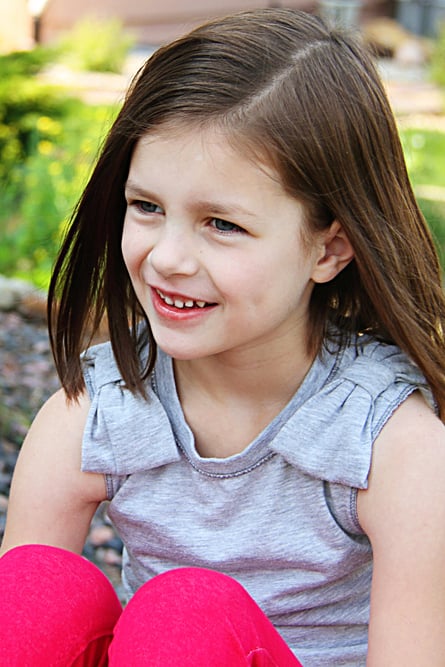 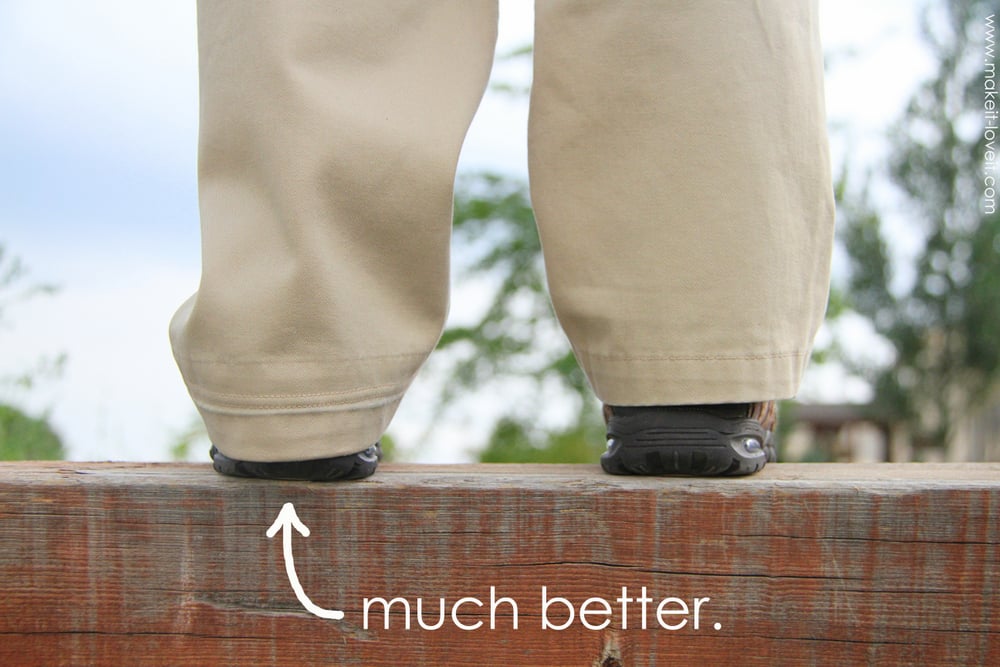