I was cleaning up a few things in my craft/sewing room over the weekend and realized just how full my box of fabric scraps had become.  I decided I needed to come up with some sort of project to use up some of those fabric pieces…….pronto.

And I know not all of you have little ones in diapers but maybe you could use this idea to give as a baby gift.  Or save for some of your own future babies.  Or grandbabies.

But how fun is this……….Embellished Diapers!! 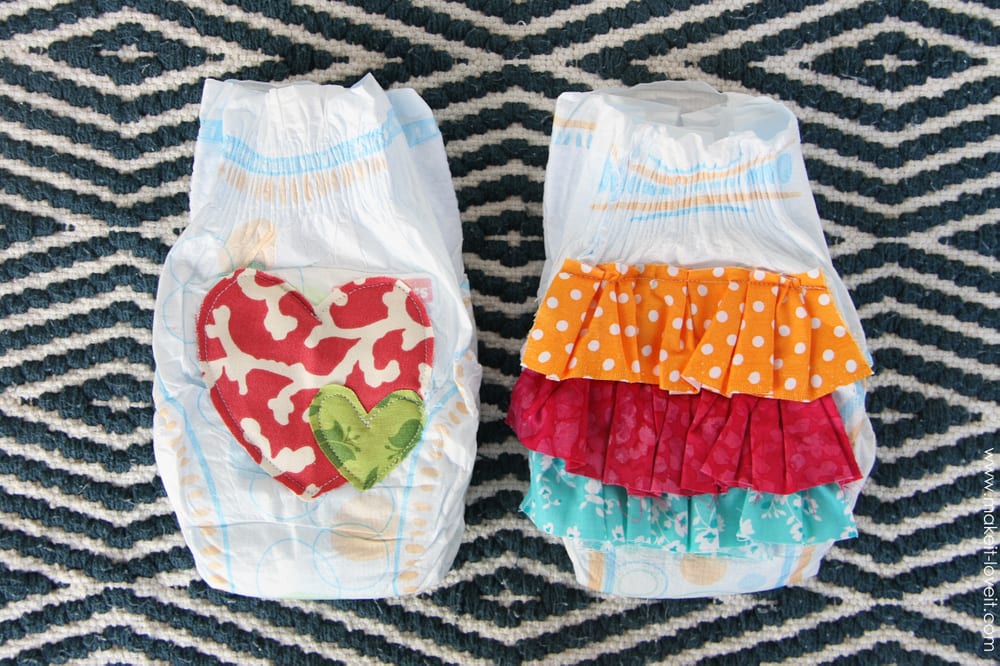 And really, I have so many scraps that it was either throw them away or use them on something.  So, it’s okay that they’ll be thrown away with each diaper change.  It really doesn’t take much time to attach the fabric……and it’s kinda therapeutic!

You could get really creative and make any sort of design or shape to add right on there.  But I always like a good ruffle on those bums. 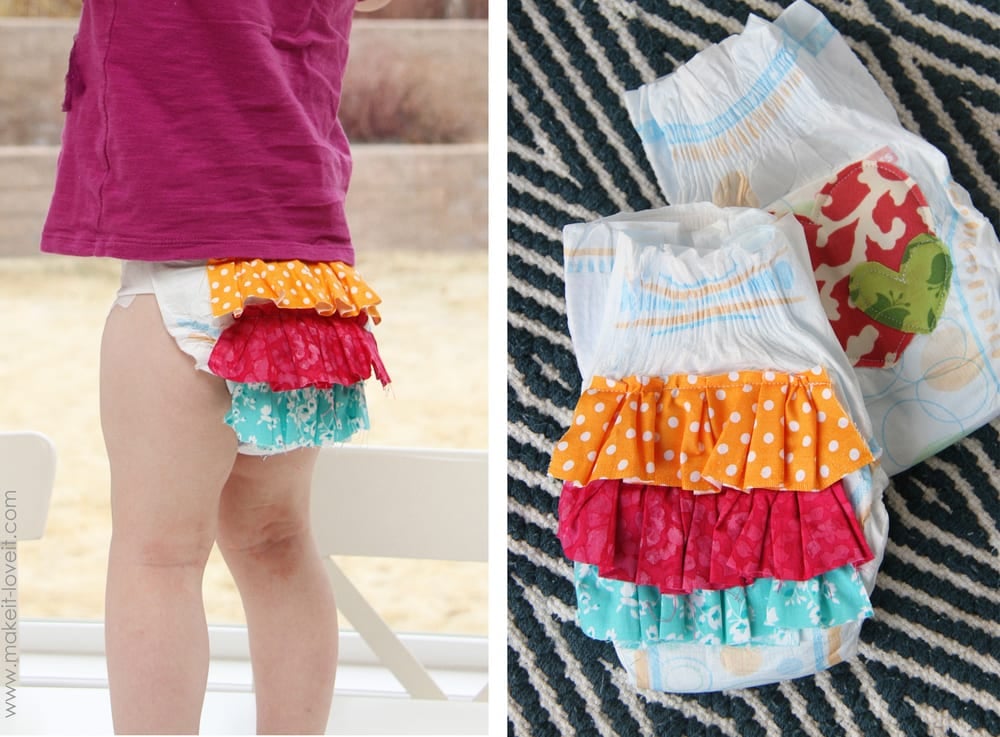 Such a fun way to brighten up those diapers when Chloe just wants to run around in a diaper. :) 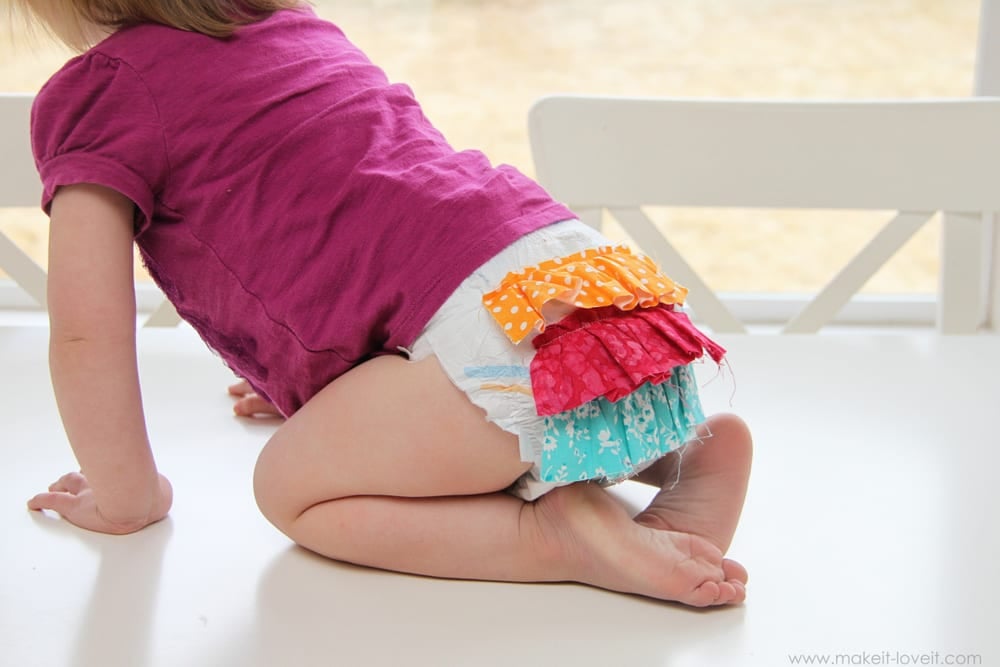 Would you like to see how I put mine together?

Oh gee………for some reason, I have lost all of my tutorial photos, to show the step by step. 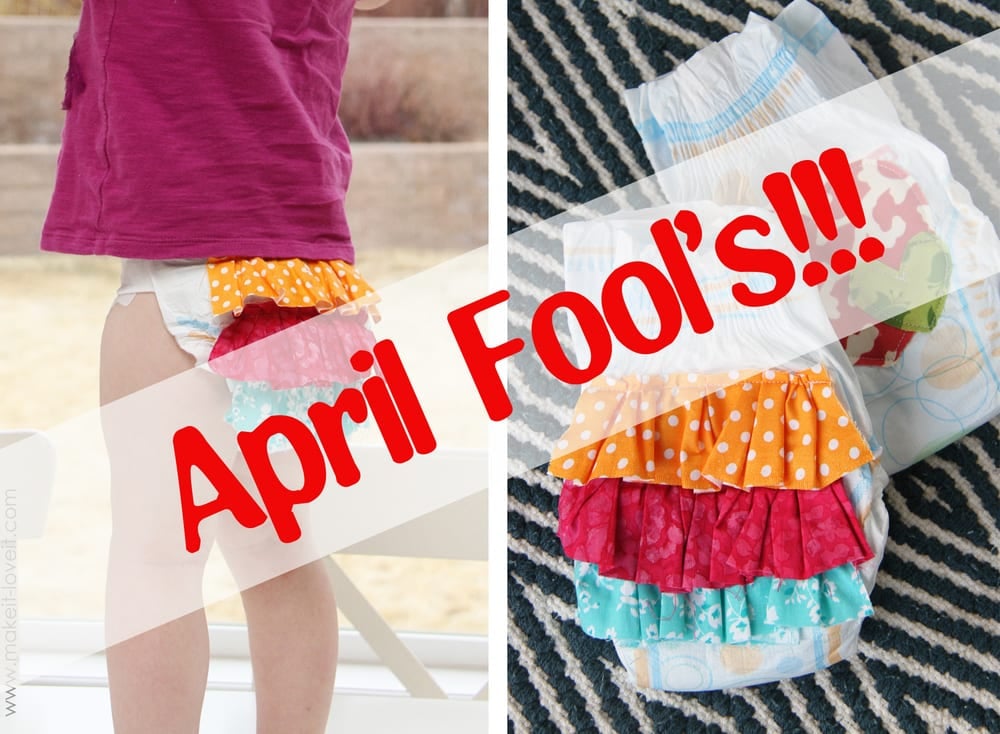 Come on, you already knew this was coming, right???  I do something a little wacko every year.  And I just can’t help myself!!!

Here’s a little blast from the past:

When I was sewing these little diapers, Elli came into my sewing room and asked what I was doing.  I told her I was sewing something.  She peered over my shoulder and suddenly gasped.  With eyes wide open, she asked, “What are you doing mommy?  You have to throw diapers away!  And that’s a waste of fabric!!!!”

Does that about sum up what some of you were thinking when you first read my post for today??  Ha Ha.

I just laughed and had to explain to her what April’s Fool Day was.  And as I finished sewing on those awful diaper ruffles, she told me a few knock-knock jokes, as her contribution to April Fool’s Day.  haha!

Anyway, hope your day is silly and fun.  And that your husband/wife/friend/boss understands that there is such thing as a non-funny April Fool’s joke. 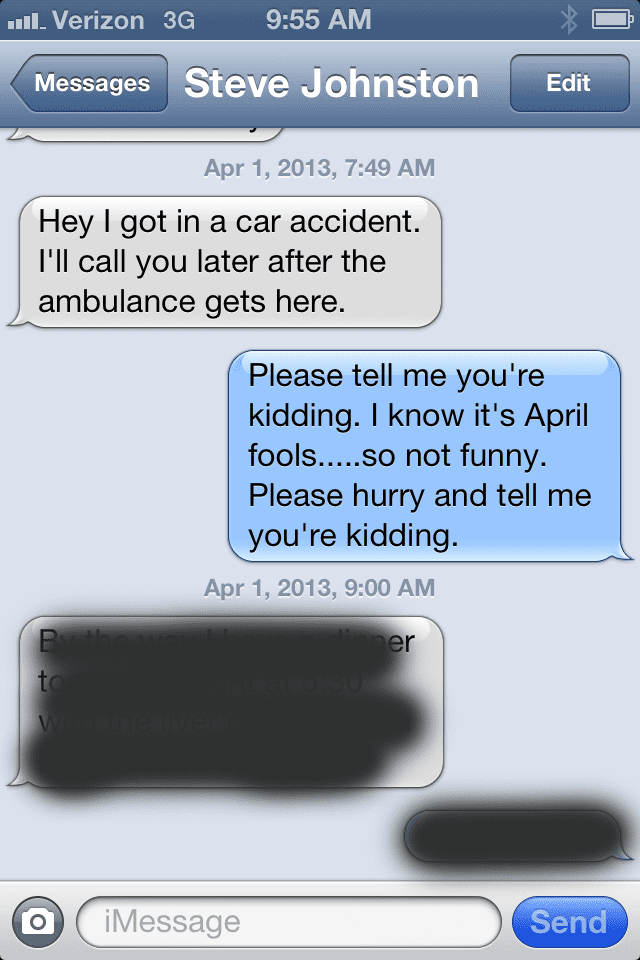 (the blacked out text is non-related…)

He didn’t text back right away……so I panicked.  And then called him.  He didn’t answer (he was on a phone call at work) and I panicked even more.  He called me back about 2 minutes later and laughed…..while I cried.  Once he realized that I really and truly was worried, he felt terrible.  Good.  SO. NOT. FUNNY.  I told him that he can add that to the list of “Things To Never Do To My Wife…..Or We Will Have Marital Issues”.  Another big one on that list is to scare me.  No jumping out of closets or peering into windows at night to scare me.  ((shiver))

Anyway, keep it fun.  Like sewing fabric to diapers.  haha! :)

P.S. And if you have no idea what April Fool’s Day is and you think I’m completely crazy…….go here.  It’ll help explain today’s post!

Ashley Johnston is a professional DIY costume maker, sewist, crafter, and owner of Make It & Love It. She is a mom of 5 and a wife to a very patient (with my craft clutter) husband. In case you’re wondering, she always chooses crafting/sewing/designing over mopping/dusting/wiping base boards……but bathrooms/laundry/full bellies are always attended to. Whew!
Author Bio Box by HOI
Author:
Ashley Johnston
Categories:
Mentions:
fabric scraps
Keywords:
Not Specified
Last Updated:
November 15, 2018 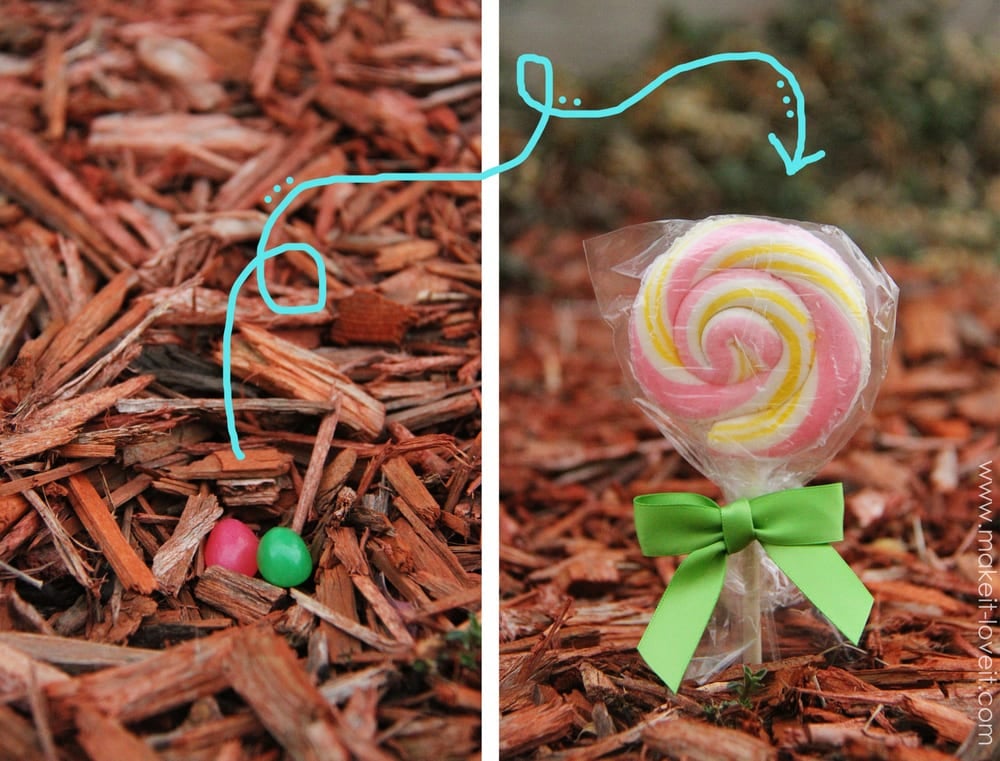 Next Post:
Did you see yesterday’s APRIL FOOL’S joke?!?! (I don’t really decorate diapers for fun…ha!)