I finished my 4 miler!! (and a goofy pre-race video…haha.)

Be sure to check out my review and GIVEAWAY of the FitBit Activity Tracker.  This little gadget collects data about your daily activities, such as exercise intensity levels, calories burned, sleep quality, steps and distance.  It does it all.  And cheers you on too!

Remember my 4 mile race that I signed up for last weekend?

(Entering the race was motivated my this Inspiration to Fitness campaign I’ve been involved with.  And thank goodness for it, because the nudge to focus on my health has been so renewing this year.)

When I woke up Saturday morning, it was snowing, adding to the several inches that had already fallen during the night.  I was bummed.  I talked myself out of running my race that day, 8 times.  And then talked myself back into it, 8 times.  All I needed was a good excuse.  But, you know, I have really been trying hard to stick to this work-out (and take better care of myself) thing this year.   And let me tell you, I have messed up many, many times.  So I have had to have so many pep talks with myself about why I need to put myself first before something else that day.  Some days I listen to my pep talks and other times, well, the pep talk fails.

But, my “you better get out there and run your frozen butt off” pep talk worked Saturday morning.  Because I went.  And I drug my poor husband along (who was actually a bit sick) to take pictures.  Because if I was going to freeze, someone else needed to freeze with me.  (And the other racers didn’t count.  I didn’t know them.)

But wooo-weee, was I nervous!  I have run harder and longer races in the past……so what did I have to be nervous about?  However, now that I think about it, I was nervous for those races too.  And after arriving at the race location, I realized, it was good nervous.  You know, “first day of school” nervous.  Or “first date” nervous.  Or maybe “it’s time to start pushing out the baby” nervous.  My insides were jittery.

(And yes, when I’m nervous, my bladder is OUT. OF. CONTROL.)

Finally, it was race time.

All the racers began gathering near the start line, and I kept fidgeting with my earphones.  Because my tunes are what keep me going. 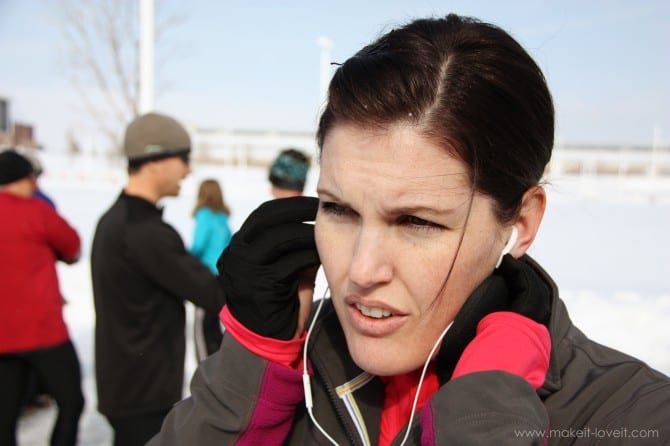 Right before the race began, I was frantically getting my timer/counter/pacer app ready on my iphone.

(It’s the bridge to 10k app that someone recommended to me weeks ago.  Love it!)  Eeeeeh, I almost forgot about it. 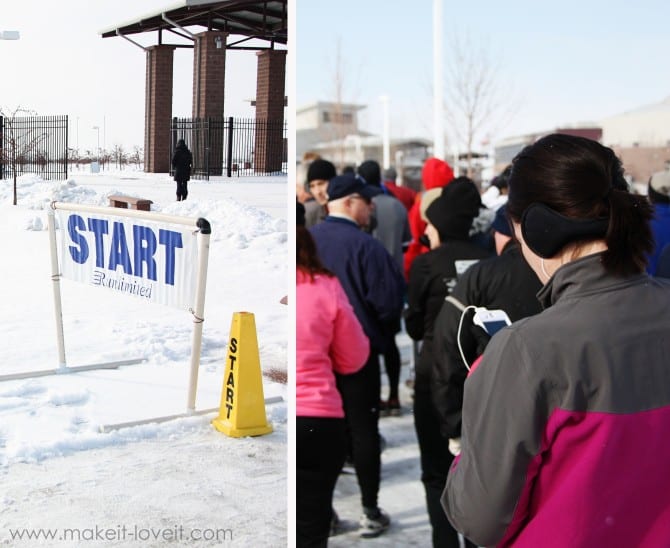 Once the race began, all the jitters flew right out of my belly.  My music was on, my legs started moving, and my body remembered the routine.  And I have to say, the beginning of the race is my very favorite.  Here I was, stuck in the middle of a herd of anxious runners, squirming to find their comfy place in the pack.  The adrenaline is unreal.  The shouting and squeals are encouraging.  There are well wishes heard from surrounding friends/family/spectators.  It’s exhilarating.  Some runners weave in and out, trying to reach the front, hoping to improve their time/pace.  Not me.  I scoot over and let as many pass me as need to.  My goal?  Just finish the race without stopping.

Steve (my husband) and I numbered certain points of the race, so he could drive ahead, find me, cheer me on, snap a few photos, etc.  So after about the first mile and a half, I got a call from Steve.  My earphones have a little button to push to answer the phone (which I use for my music too), and without much breath left to spare, I muttered a hello.  He told me he was at point #2.  And he told me good luck!  Awesome.  I picked up the pace just a bit. 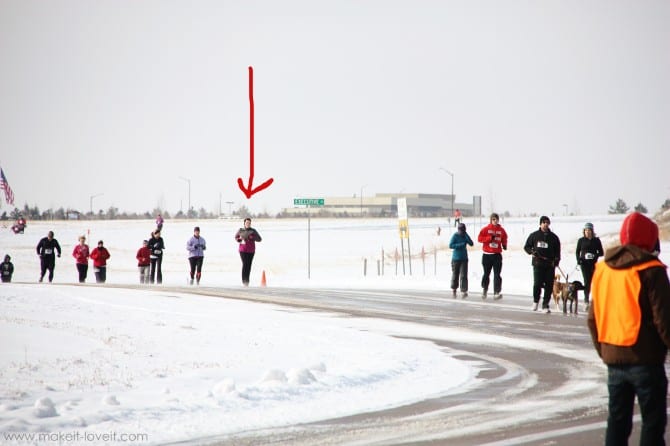 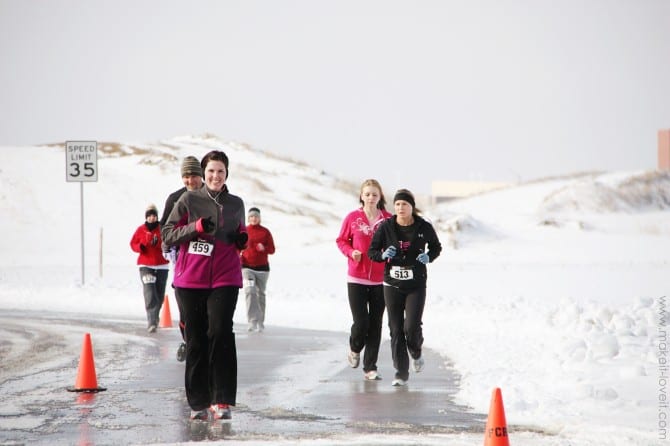 I loved seeing him.  It made me forget about my frozen nose and numb toes.

After the first 2 miles, I feel like the pace had settled and I was surrounded by others who were most likely going to be running next to me for the rest of the race.  I found myself continually watching a husband and wife, each with their own dog, and their 10 (ish??) year old son.  The man and woman seemed to be skilled runners but were jogging a slow pace, so that their little boy could keep up.  They were so encouraging to him.  I was just flabbergasted that this little guy was running a 4 mile race.  When I was 10, I hated running.  And could barely run the 100-yard-dash on field day.  Ick.  (Oh wait, I still hate it.  Kind of.  It’s a love/hate thing, I guess.)  So, it was a great distraction to watch this mom and dad encourage their little boy.  They constantly prodded him with, “come on buddy, you’ve totally got this.”  And, “you see that guy taking pictures? He’s from the newspaper. Show him what you’ve got!”  (Ooops, that was just my husband.  Not the newspaper.)  The mom and dad would occasionally stop and jog in place to give him a breather and then he’d kick it in gear again.  I totally stole their encouragement for him and used it for myself too!

For the entire race, this little family was either just ahead of me or right behind me.  So yeah, I totally snapped a picture with my phone, just to remember this little running family.  They inspired me. 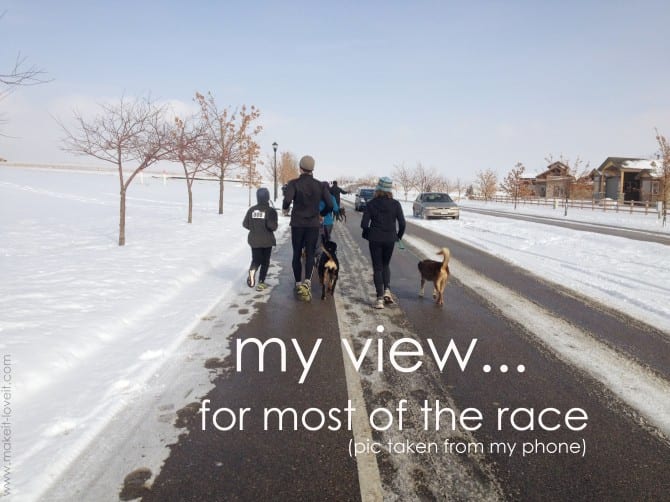 (And I didn’t even get embarrassed until later, that my slow running pace was the same as a stop-and-go 10 year old’s pace.  Because we finished the race about the same time.  Ha!)

By the time the end of the race neared, I realized the last 1/4 mile of the race was uphill.  And covered in bumpy snow clumps.  In case you were wondering, bumpy snow clumps are really hard to run on at the end of a race when you’re nice and tired.  (FYI, I cry-baby about anything other than super flat and smooth running surfaces.)  I just wanted to stop and walk for just a few seconds but………ack, my brain wouldn’t let me.  Because that wasn’t in the “plan”.  So 17 pep talks later, I kept running (probably at a slower-than-walking pace) and made it to the last stretch of the race. It’s funny, I don’t even remember people being around me.  So, to see this picture, confuses me. 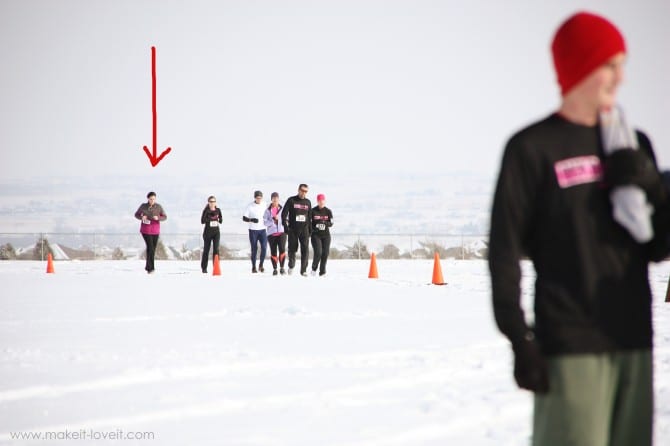 Because all I remember is the snow.  And desperately looking for the finish line.  Oh, and I also remember that the stinkin’ bumpy snow under my feet was making me tired. 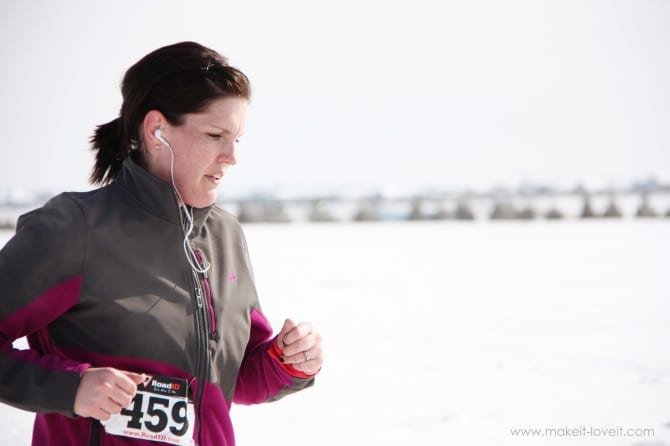 But don’t worry, this story has a good ending.  I finished the race.  I met my goal.  And I felt so good when I was done. 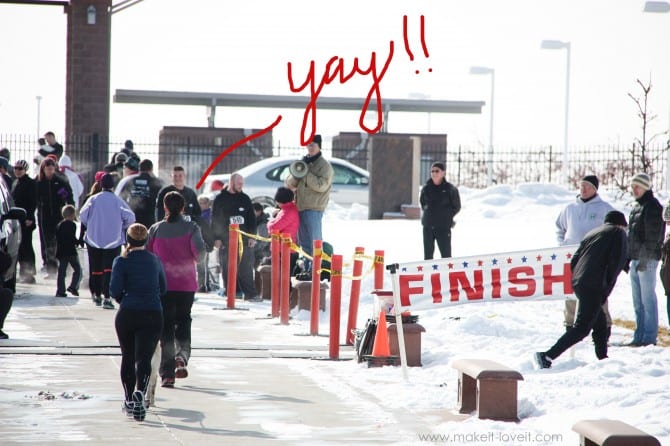 Not bad.  More like a walking pace for some……haha!

And I should probably write a Thank You letter to the parents of that little 10 year old boy.  Because watching/listening to them kept me going.

Have you hit a plateau with your workouts?  Alysa offers some great tips to challenge your body and keep progressing.  I love her timing…..because I need to remembering that hitting a plateau is normal. 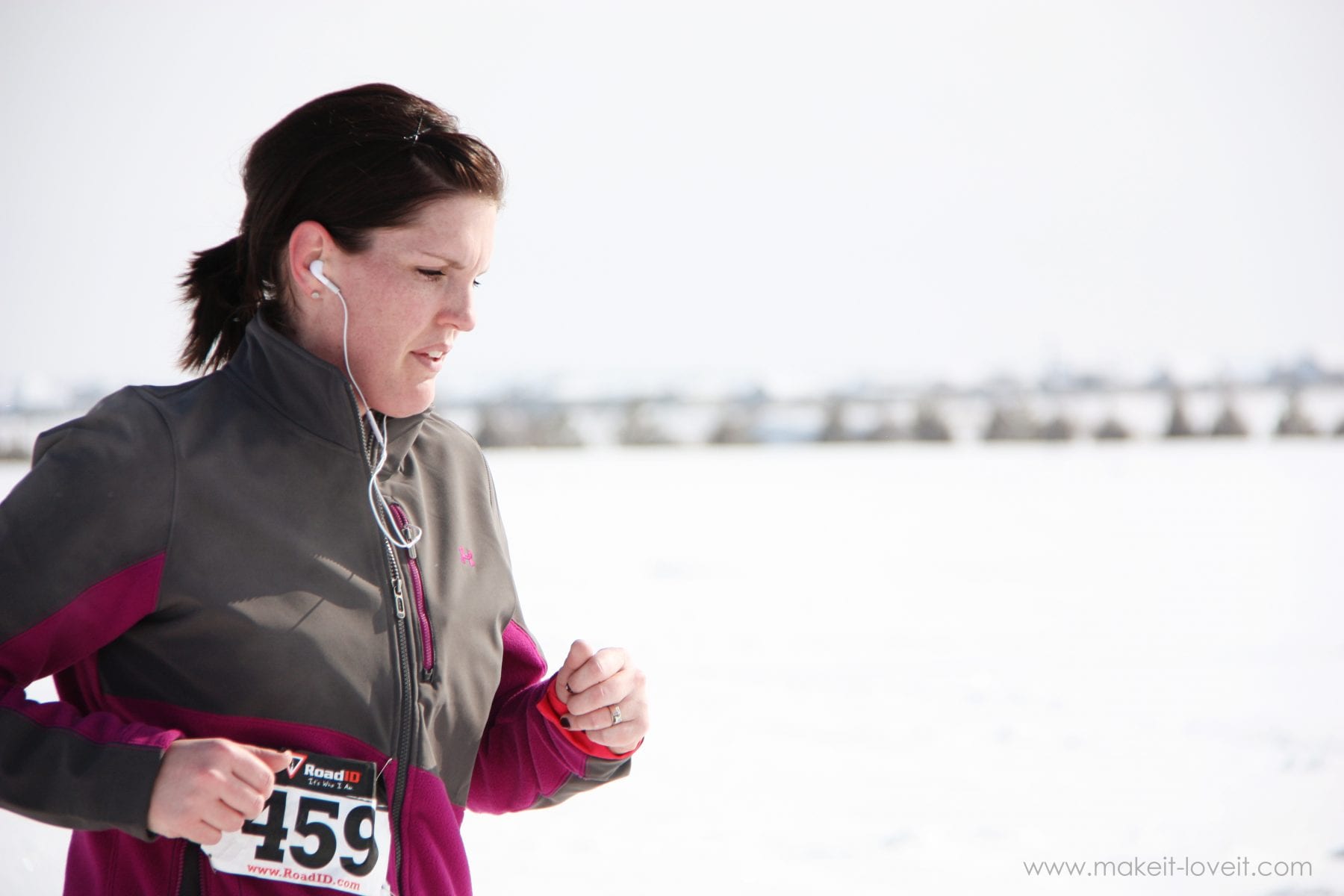 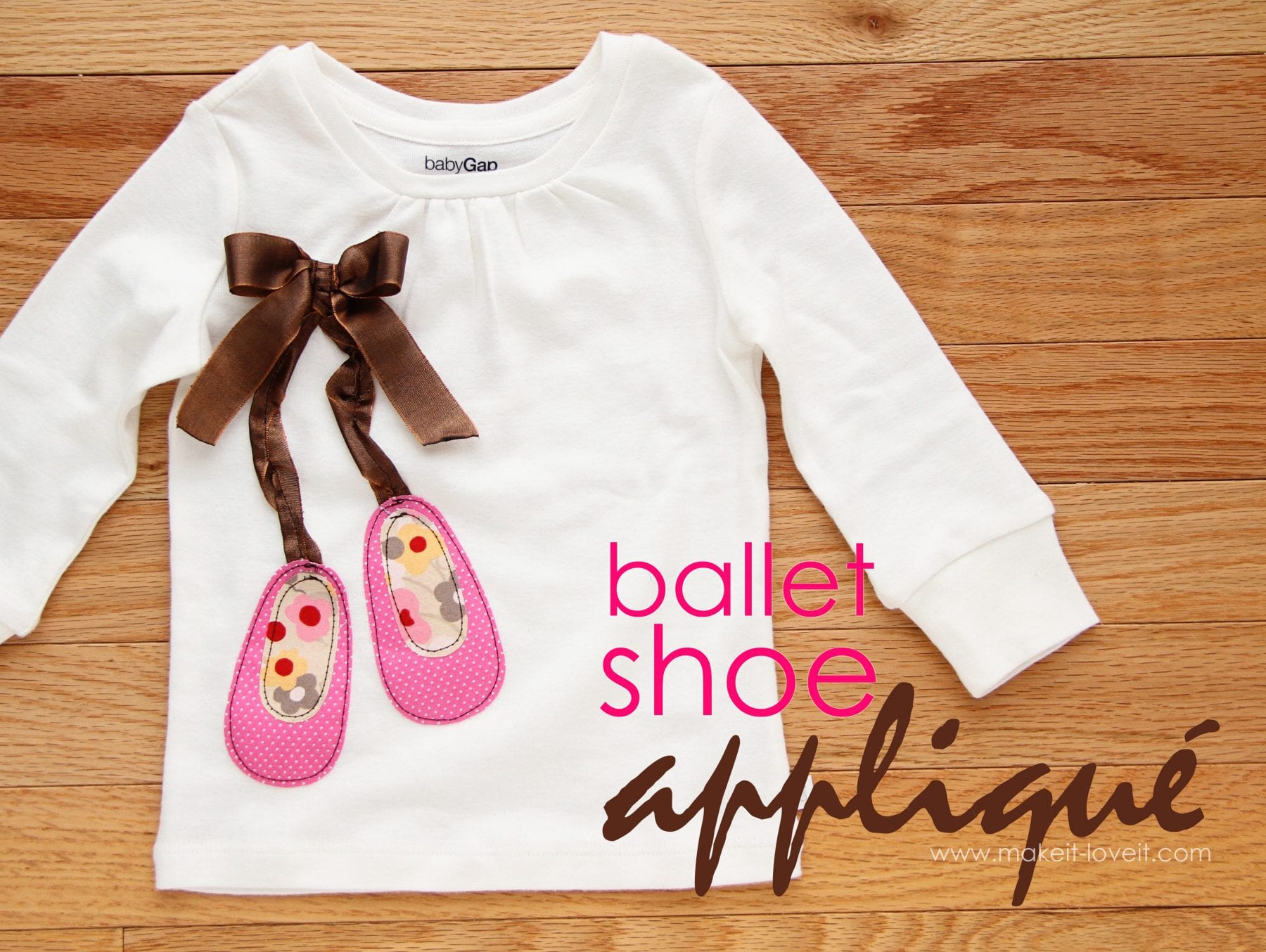 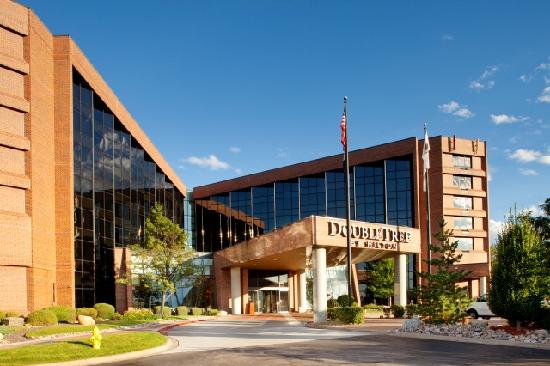