—-> [First of all, yes, I have more costumes to share….there have just been so many things slowing me down (((ahem, so many illnesses in this household))), but don’t worry, I’ll still share!  Even if it’s last minute.  The boys’ costumes are in the works!]

I painted and decorated some little plastic skeletons several years ago, and turned them into some Costume Award Trophies for a Halloween party I was helping to plan.  They were SO MUCH fun to make…..and even more fun to distribute to the winners!  I still remember one of the little boys who won the “Most Creative” trophy (who we were friends with) had that little trophy sitting up on his dresser in his room for months and months.  Ha…..he was so proud to have been the winner! :)

Anyway, I’ve been helping to plan another Halloween Party at our church and you bet I signed right up for making the costume contest awards!  Haha….they’re just too fun to make ….and give! :)  However, this time, I had the help of a friend….and we switched things up a bit!  So I just had to share…in case you’re throwing your own party, and would like a few more ideas for your awards! 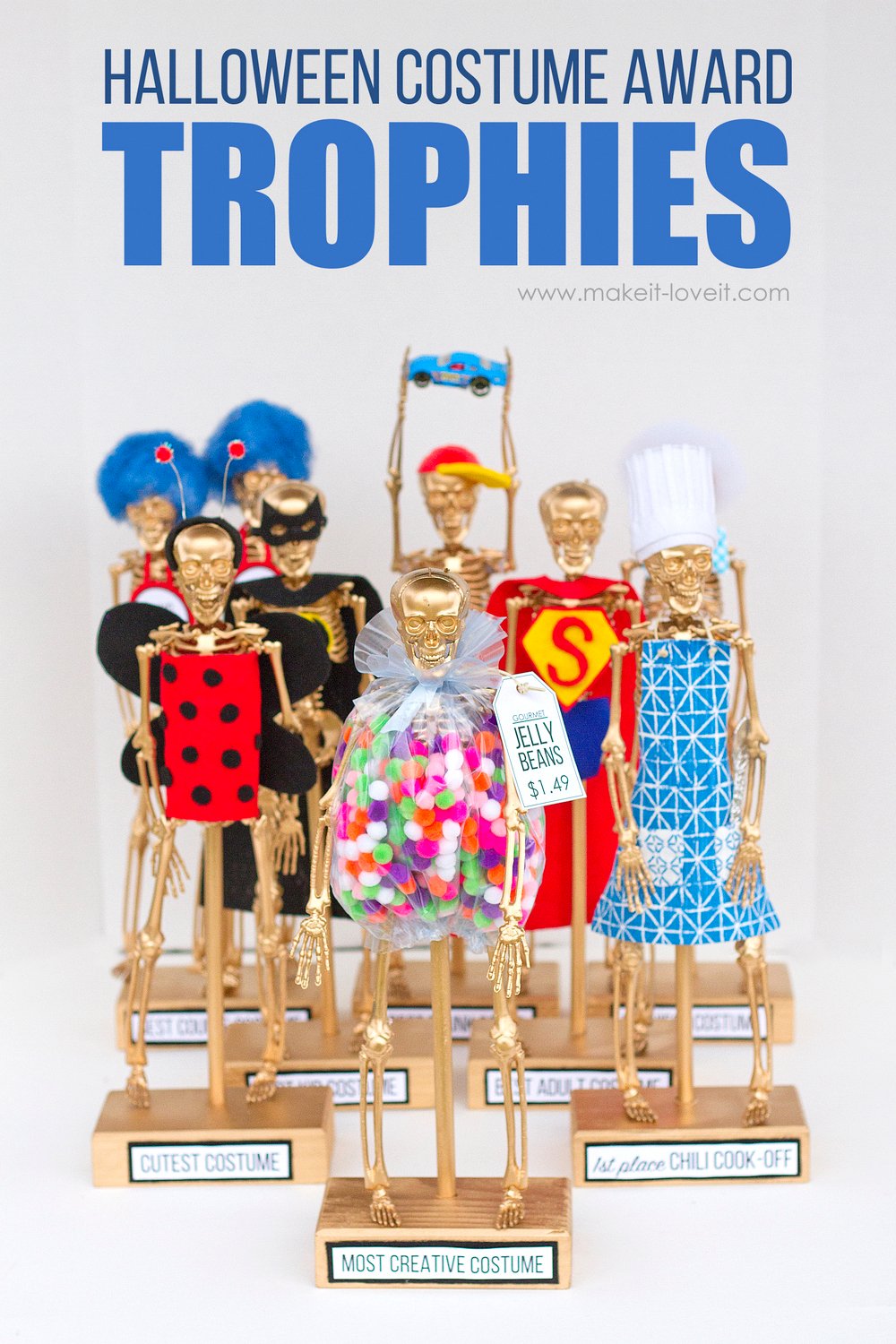 These are the Costume Award Trophies that I shared a couple years ago. 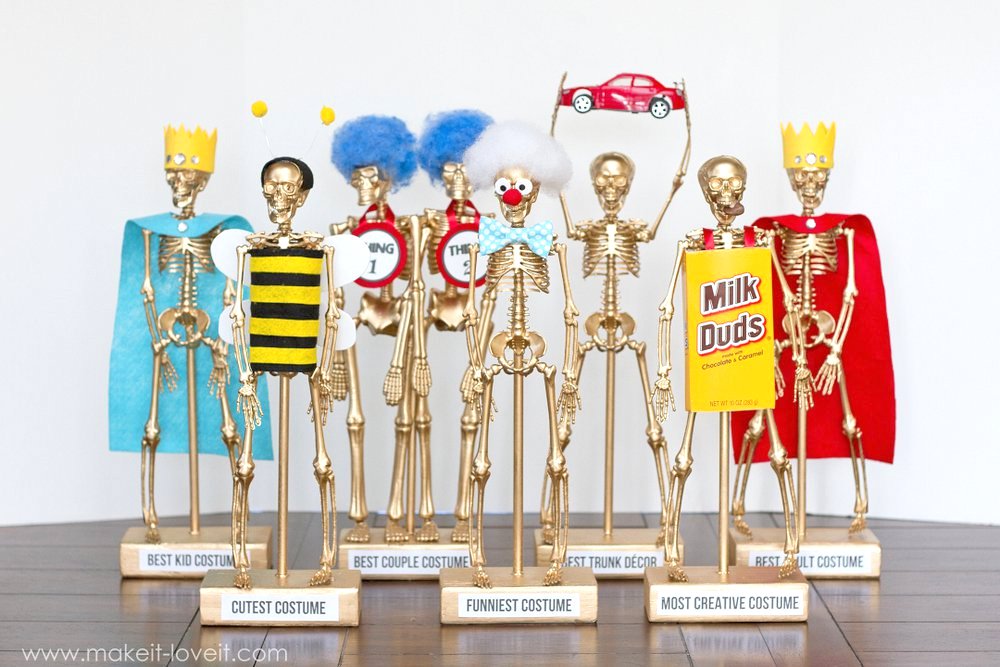 This year, we kept the same award titles, but changed up some of the costumes on the skeleton’s.  Here are the ones that are different from the originals. 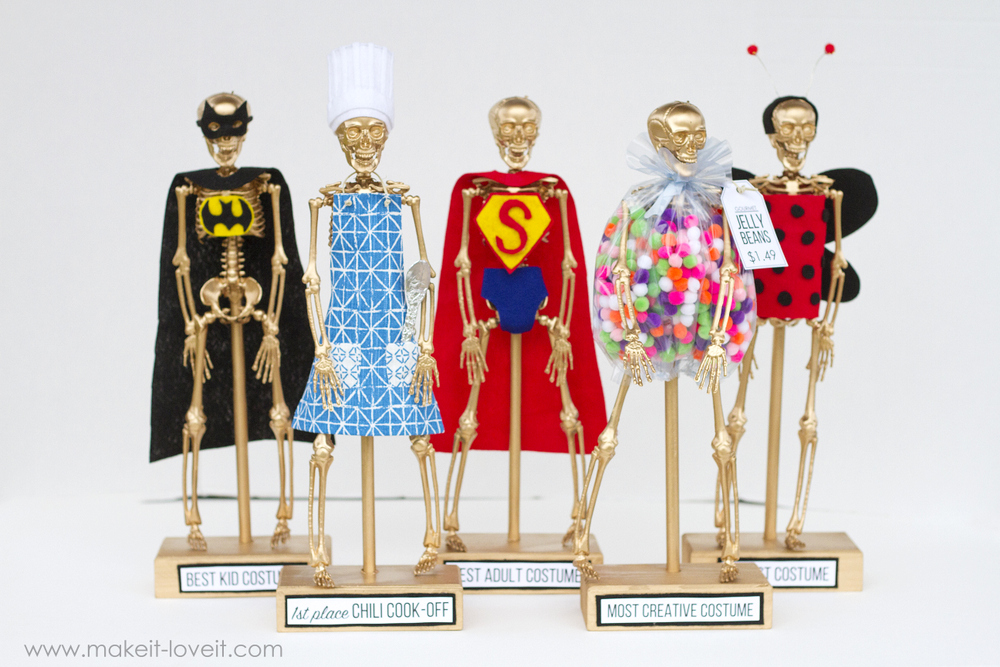 The other thing I changed was added a black felt backing to each of the titles, to help them pop a little more. 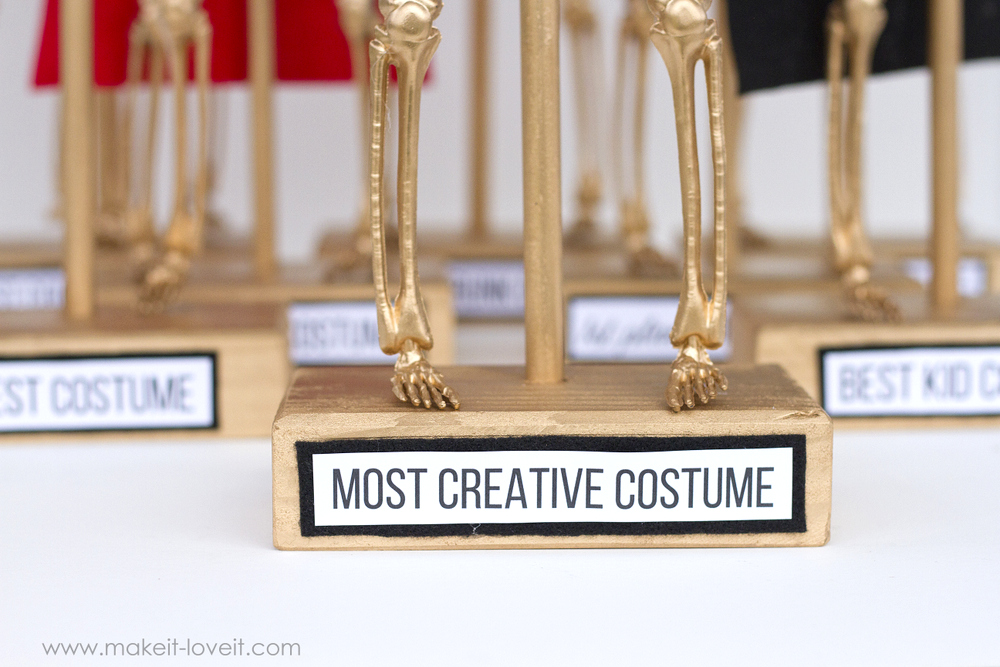 You can always pass out a box of candy to your costume winners…..but a fun trophy to send them home with is so much more fun! 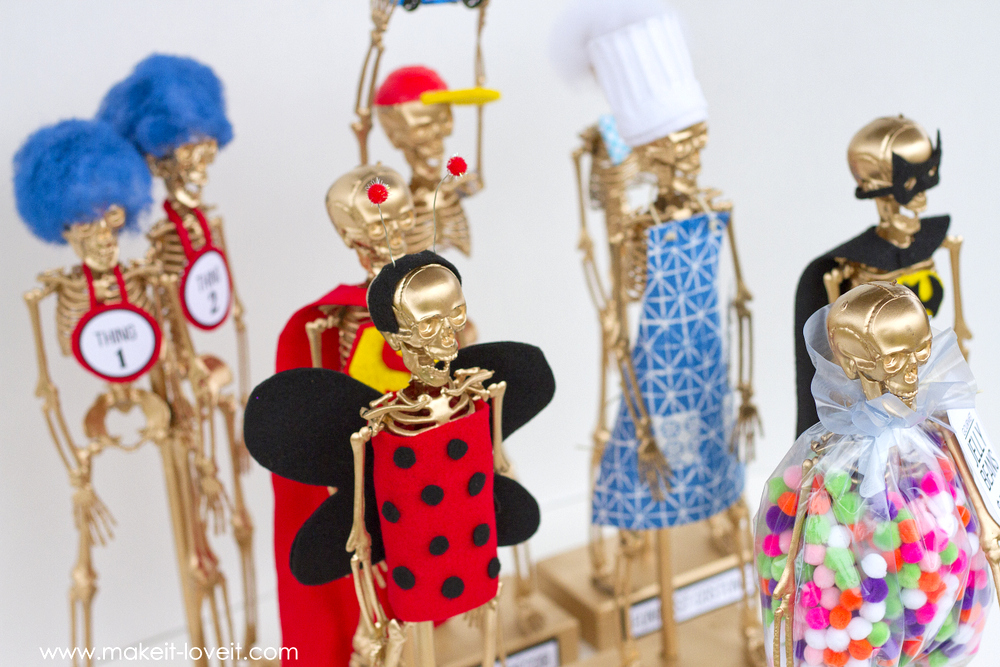 —–> Be sure to check out the original Costume Award Trophy tutorial to see how I put the base of the skeleton’s together and how I attached them.  Also, all of the original themes are over there as well.

As for the newer designed trophies that my friend (hi Carma!!) and I put together…..I’ll show you that below!

First up—the Chili Cook-Off award.  I don’t know if any of you go to a church-type Halloween party….but for the past I-don’t-know-how-many-years I’ve been going to church Halloween parties, we’ve always had chili.  And many of those years, it has been a contest.  So, we decided to add this category to the trophies, and hahaha, this is probably my new favorite one! :)

We added an apron that I cut up from a fabric napkin, added some rounded pockets from a different printed fabric and then added twine for the apron ties.  We also created a little stirring spoon (cut out from cardstock and wrapped in tin foil) and stuck it into one of the pockets. 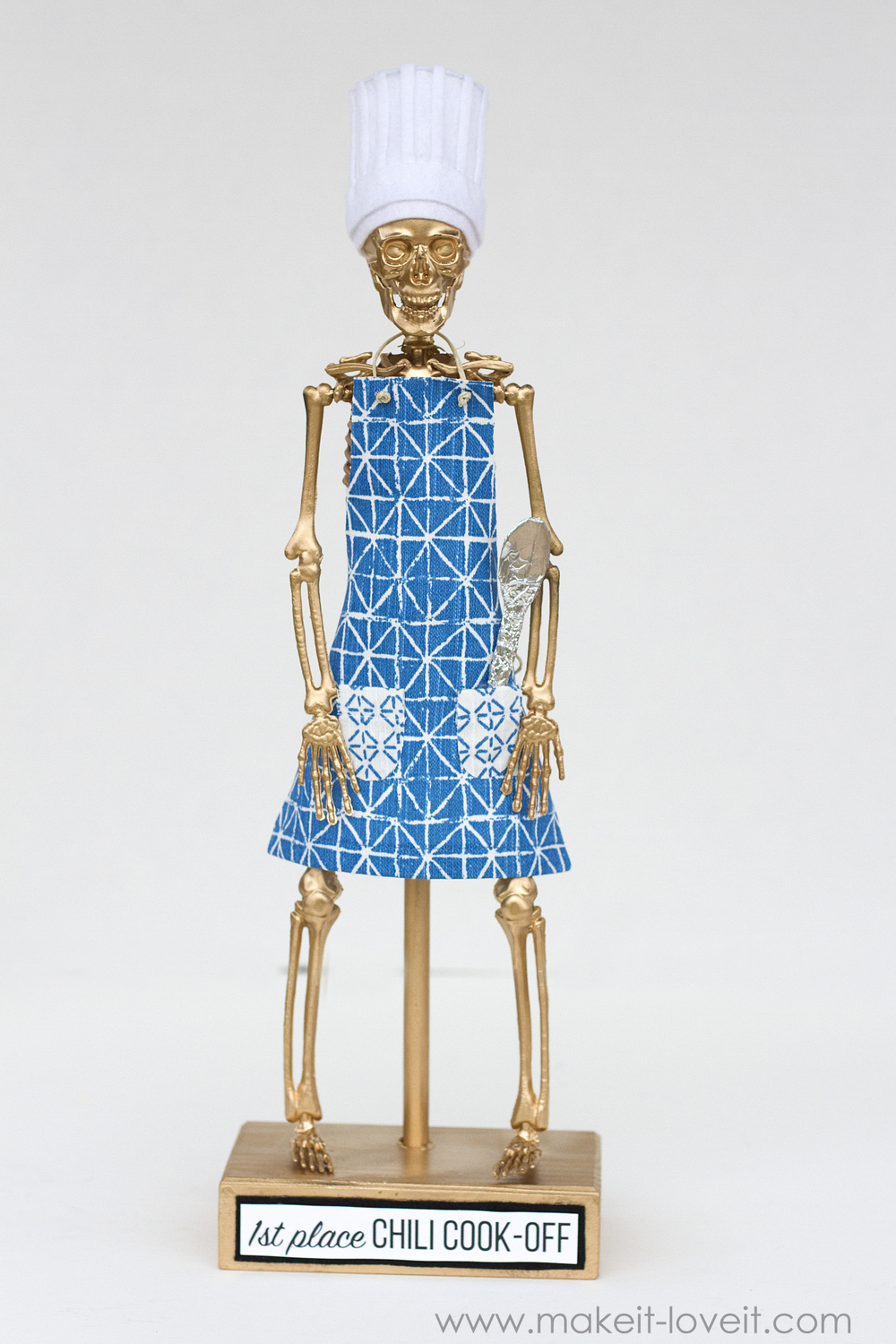 The hat is made from felt glued into a cylinder shape with a circle on top to close it off….then additional skinny strips of felt added around the outside, to make it look more genuine. 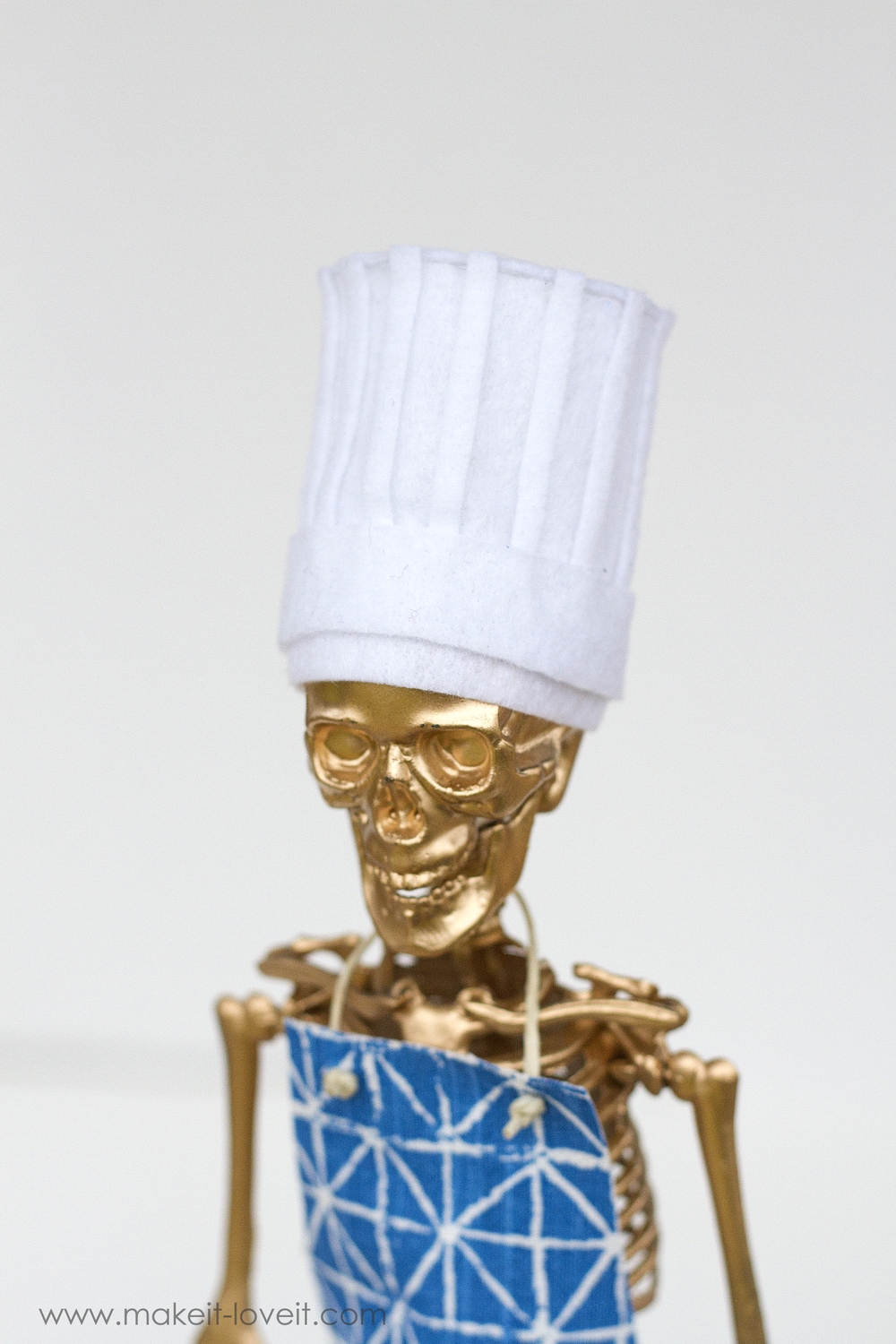 The twine even ties the apron together in the back! 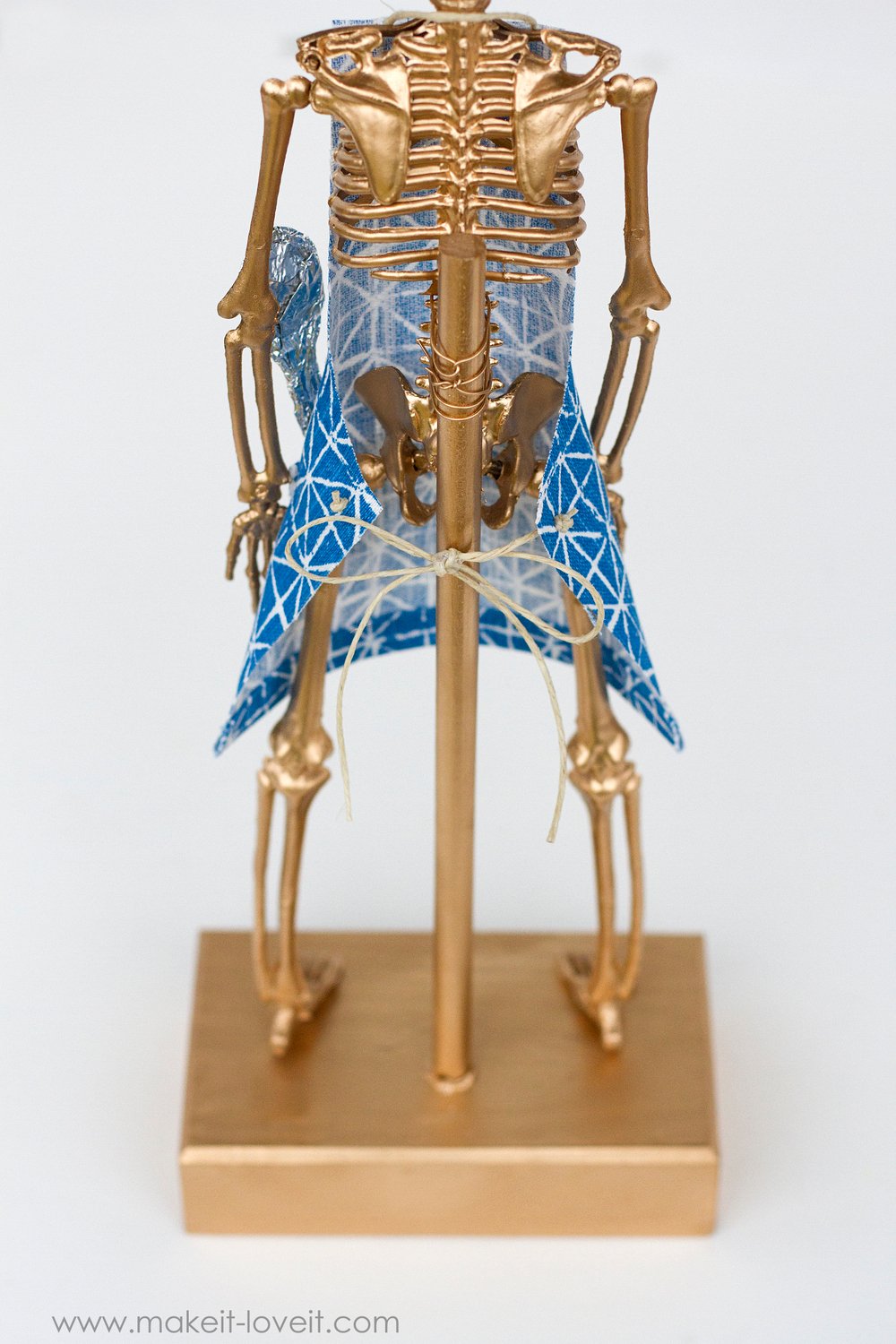 Instead of the Milk Dud costume for the Most Creative Award like last year…..this year we came up with a bag of jelly beans!  We used a a gallon size ziploc bag, cut off the top and bottom, and then slide it around the skeleton.  We cinched the bottom together using hot glue and pinching it tightly together (be careful to not burn those fingers!)…tryying to make it look more like the bottom of a package of candy.  Then, we cut little holes for the arms to fit through, added some puff balls, and then cinched up the top round the neck of the skeleton. 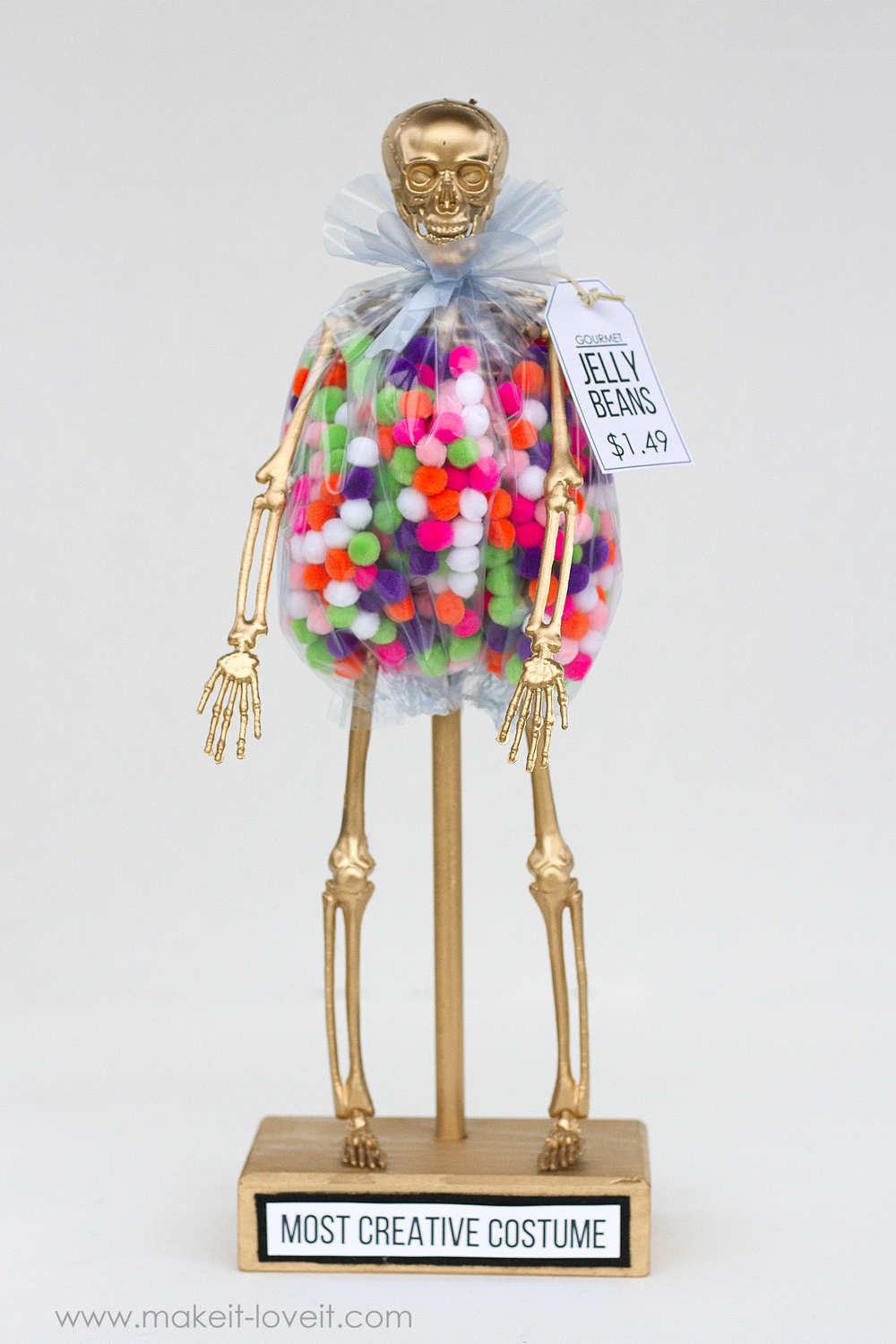 Then we tied a little twine around the neck to hold the bag in place and then attached a little Jelly Bean tag! 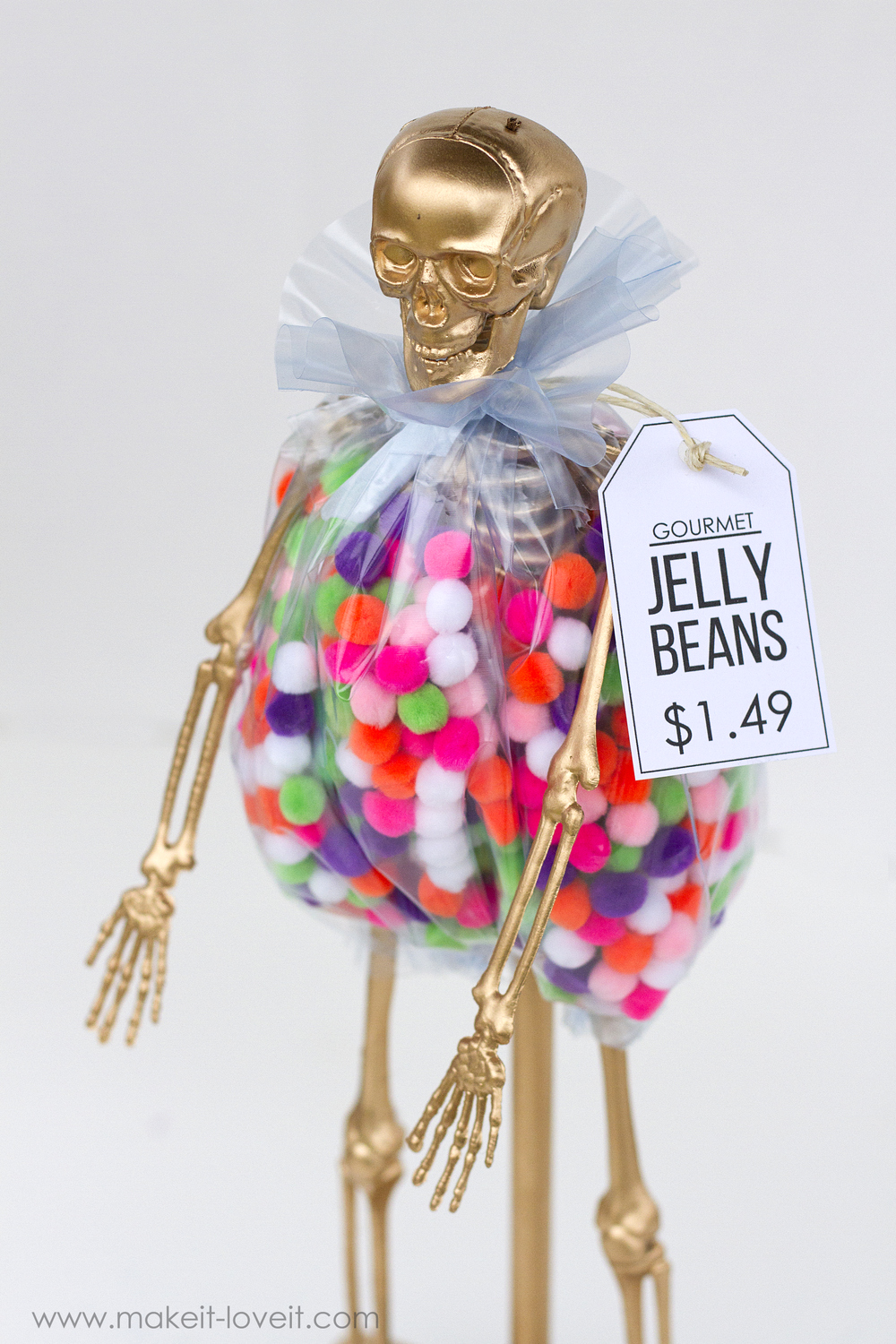 This little lady bag was created just like the bumble bee from the original post…but just switched up the colors and made polka dots instead of stripes.  And if you’re like my husband, you might be pointing out that lady bugs don’t have read bodies…..they have black bodies with red dots.  Ugggh.  You get the idea though, right?! ;) 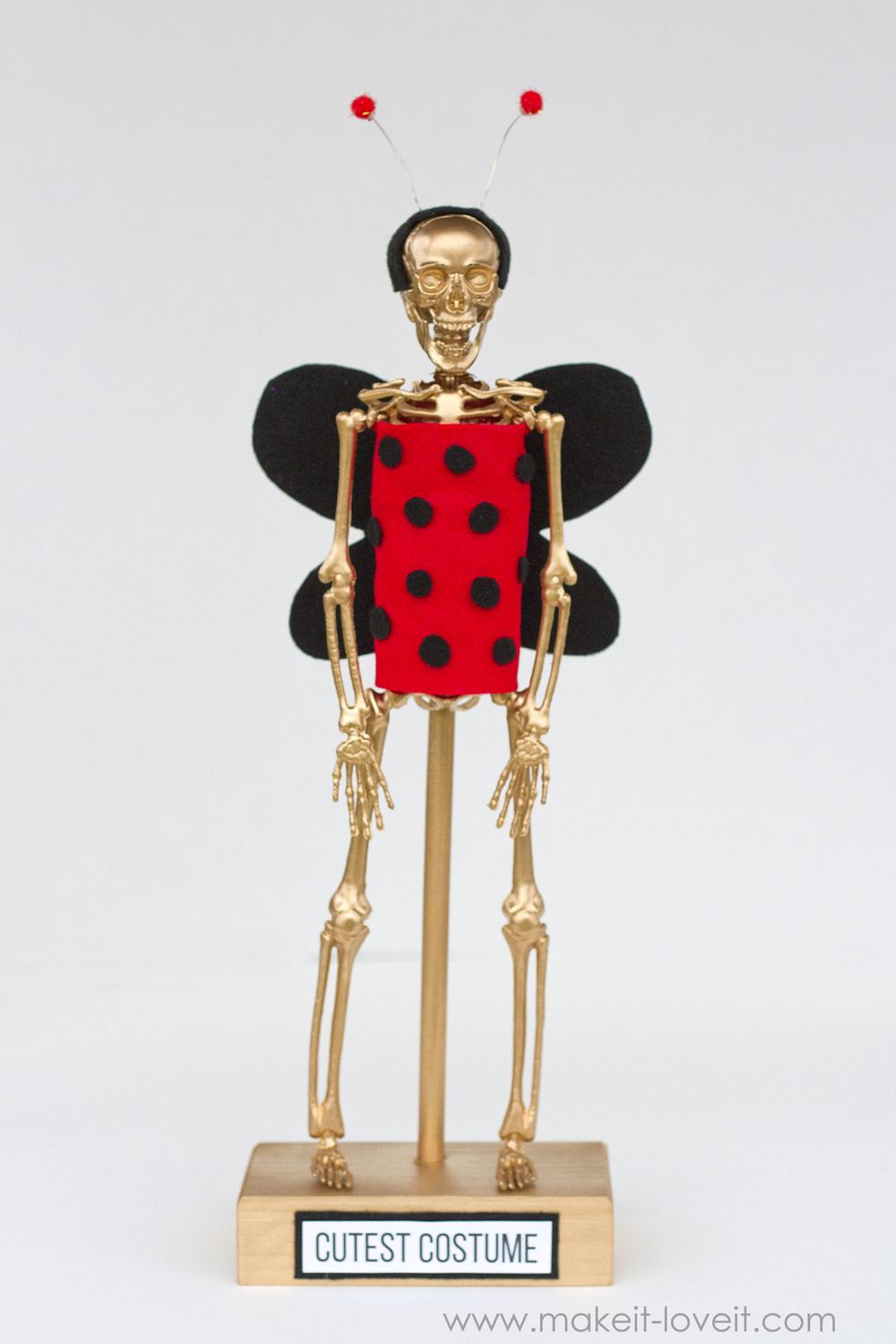 Another one of my favorites — BATMAN!  Haha….didn’t he turn out super cool?! 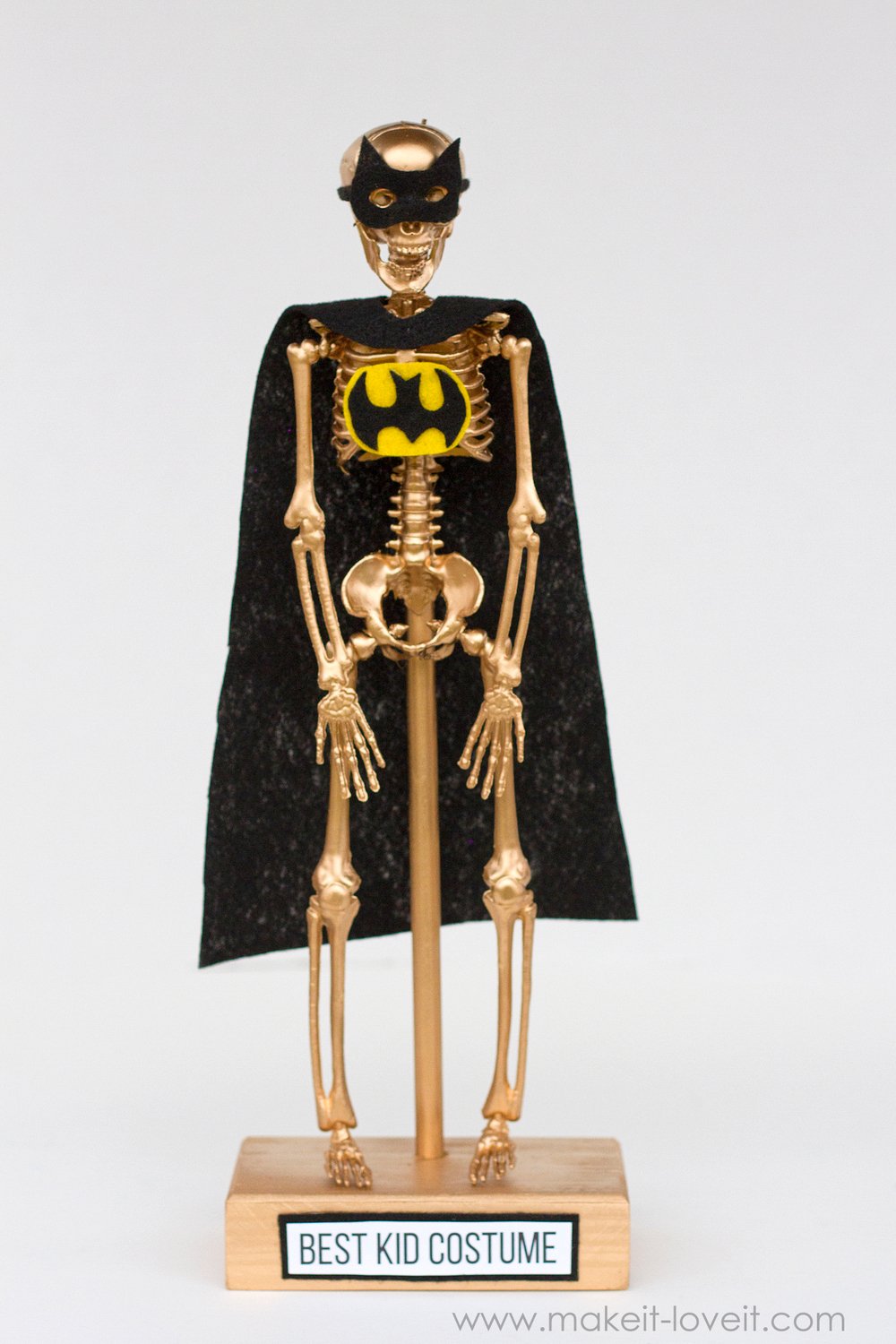 The capes are made just like the capes from the original tutorial.  But then we cut out a little mask with bat ears and eye holes….and then of course, the batman symbol on his chest. 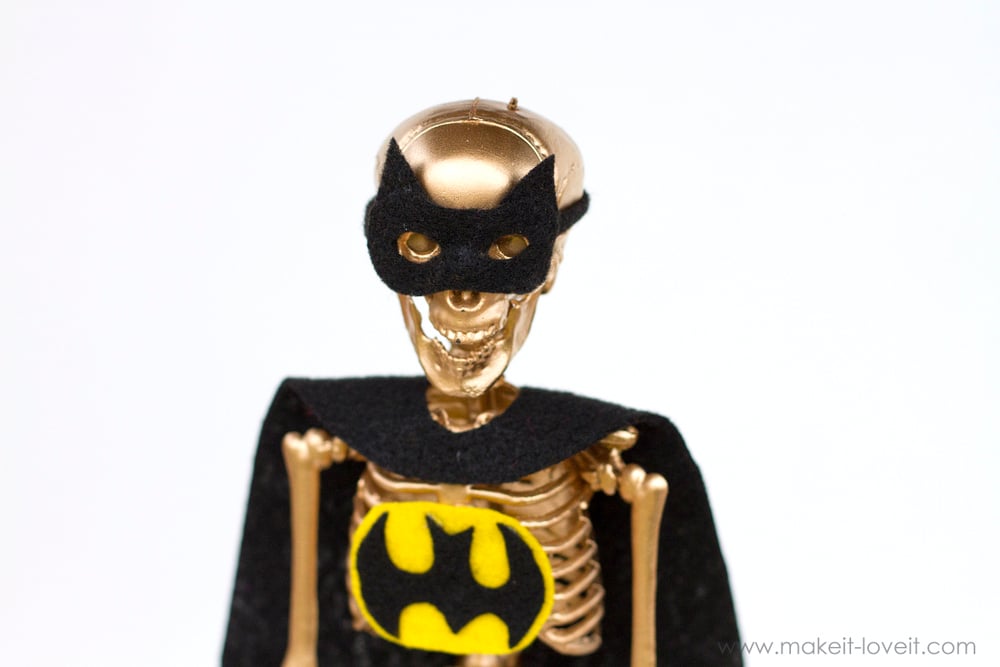 Superman was similar to Batman except for instead of an eye mask, he got some blue undies! Hahah…makes me laugh. 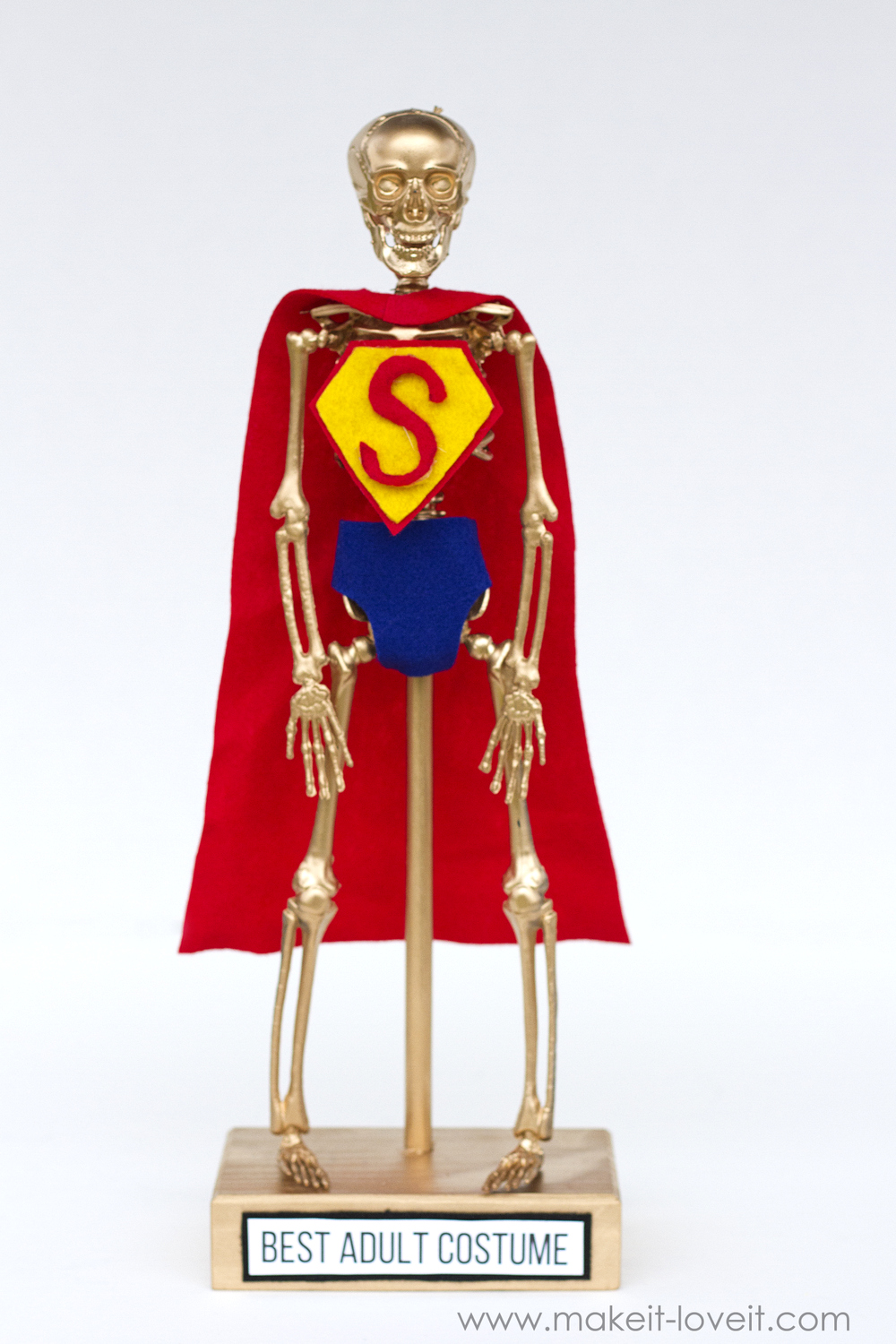 In case you’re wondering about the undies….we cut them out just like a diaper shape, put it on similar to a diaper (except the flaps on the front overlap to the back), and then glue the flaps closed. 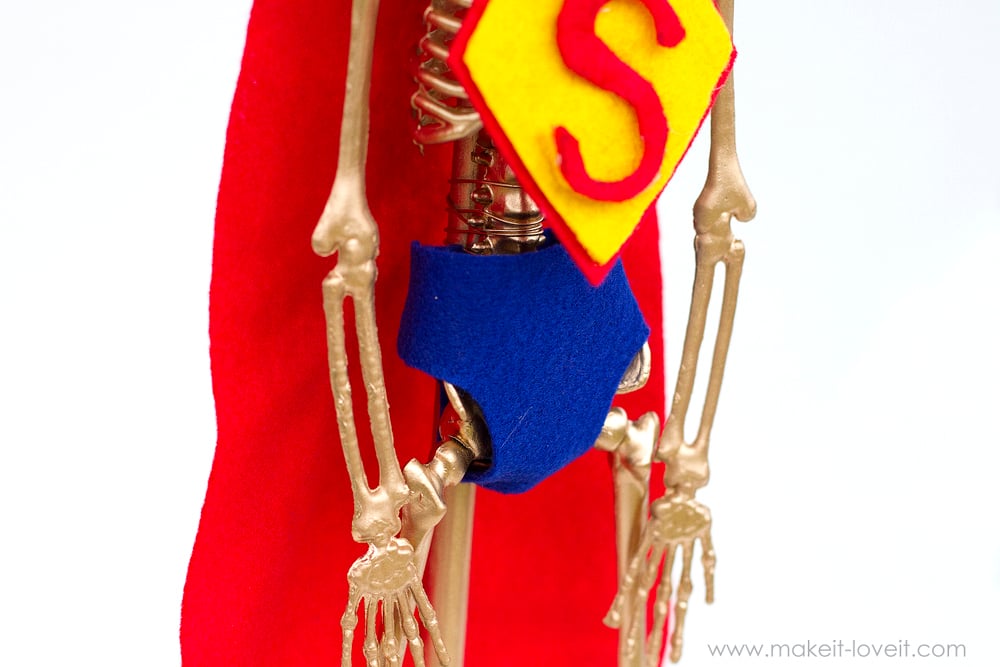 And that’s it….all the newest additions to the Halloween Costume Trophy awards! 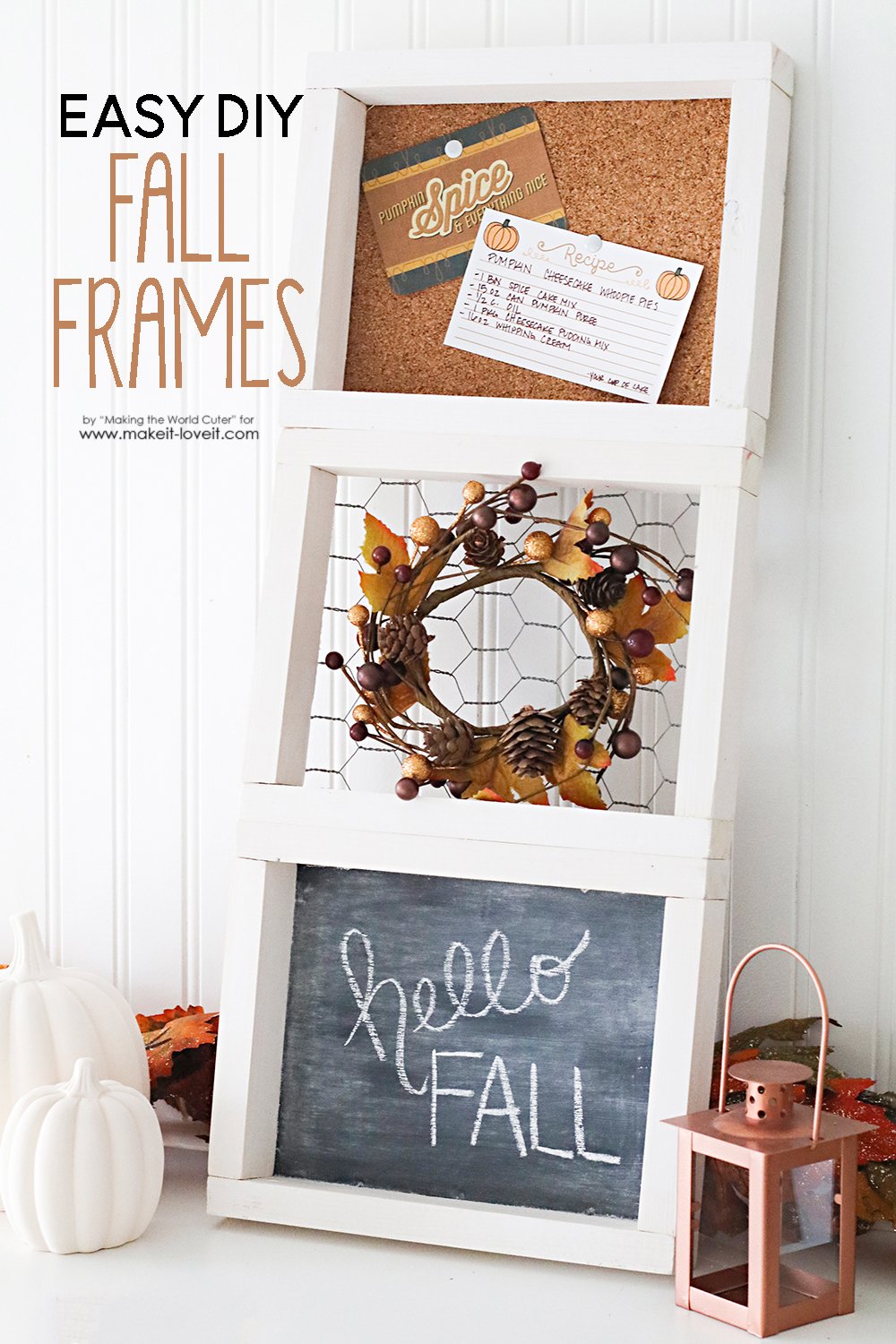 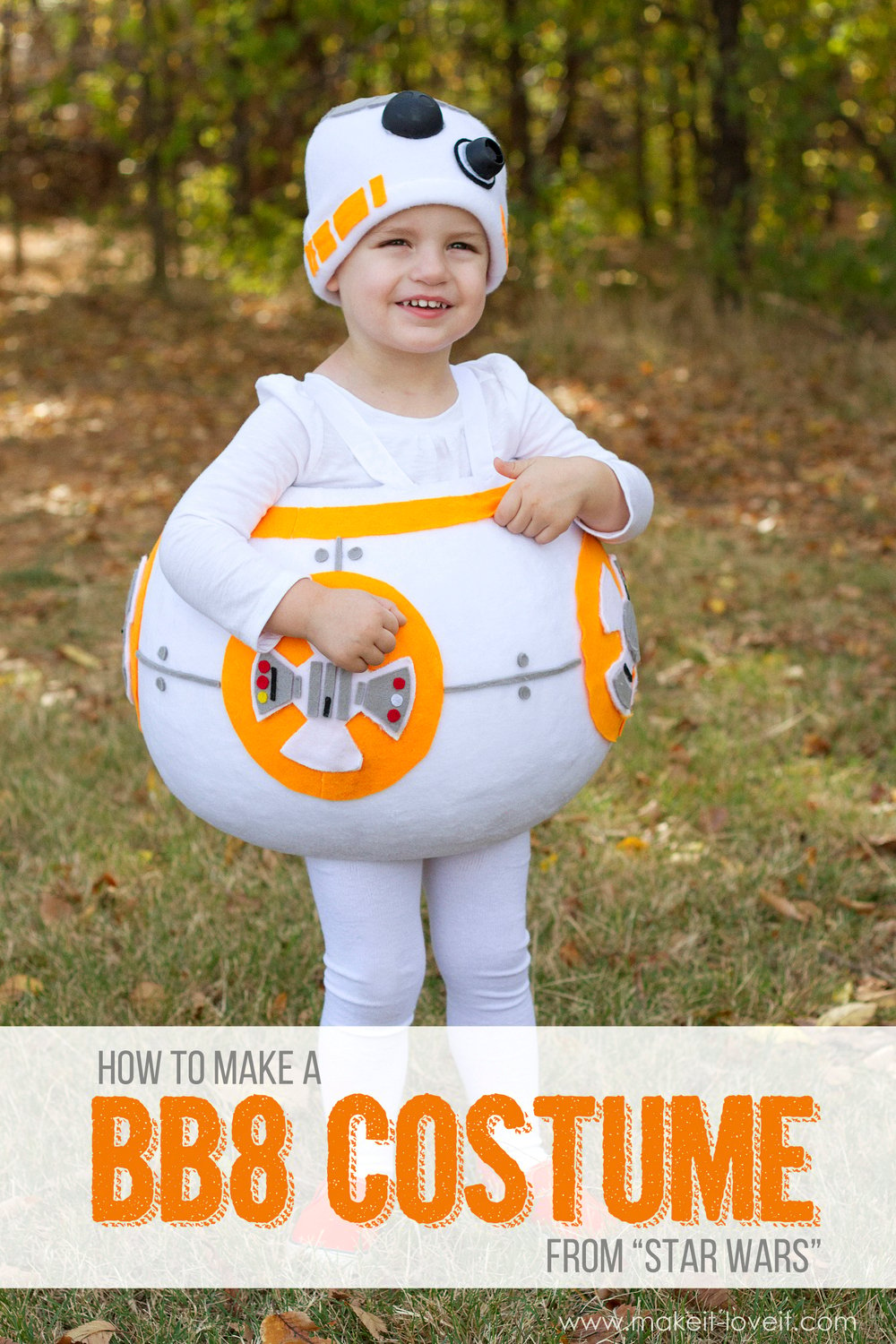 Next Post:
How to make a “BB8” STAR WARS Costume!