I know I just chatted about Connor’s 7th birthday the other day but forgive me while I wrap my brain around how Oliver could have possibly turned one, only about a week ago.  I know children grow so fast but I swear that each child you have grows faster than the previous one.  So strange. ;)

So without having any control over it…….Oliver turned 1!!! 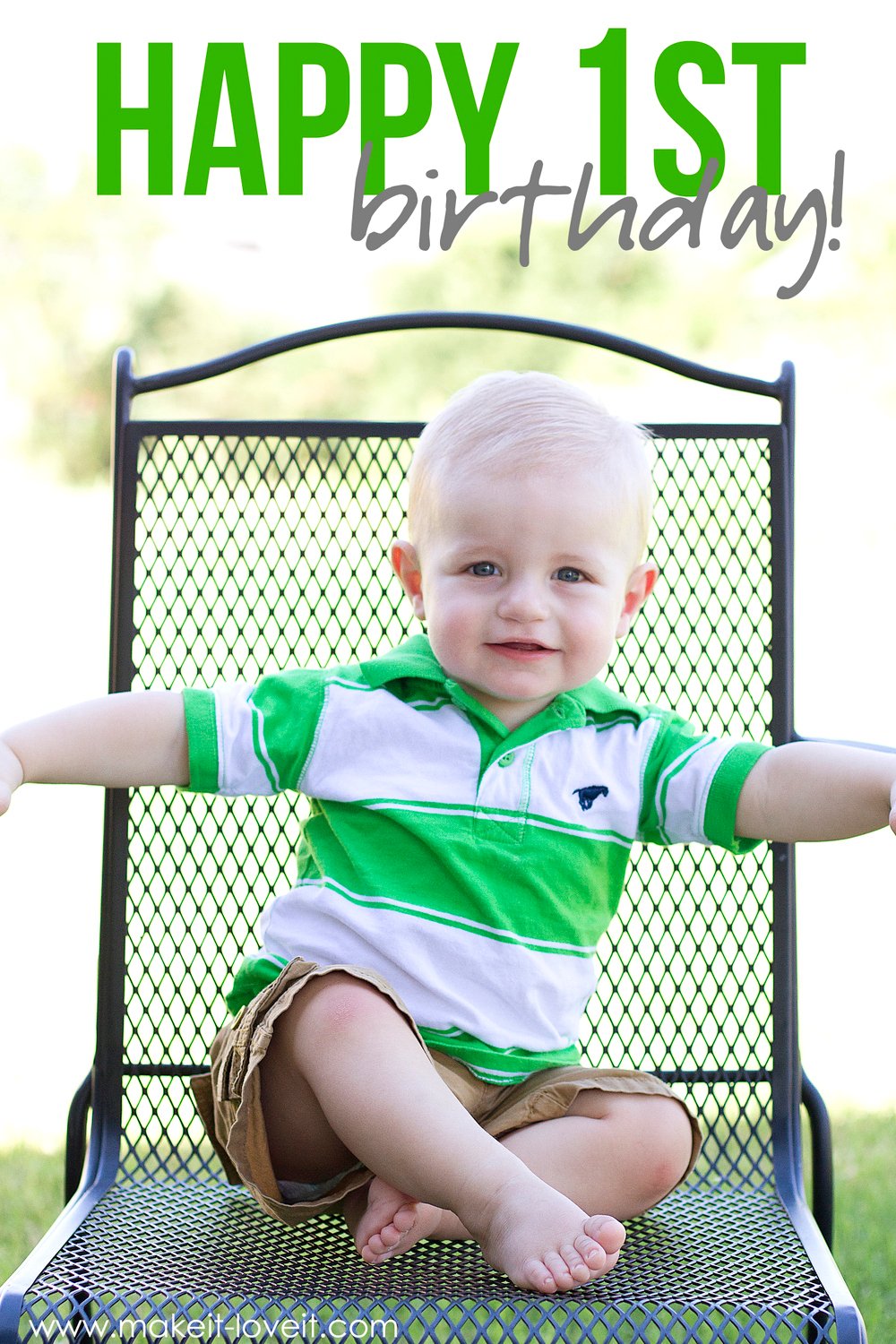 And yes, I’m still a little cranky that he doesn’t still look like this anymore… 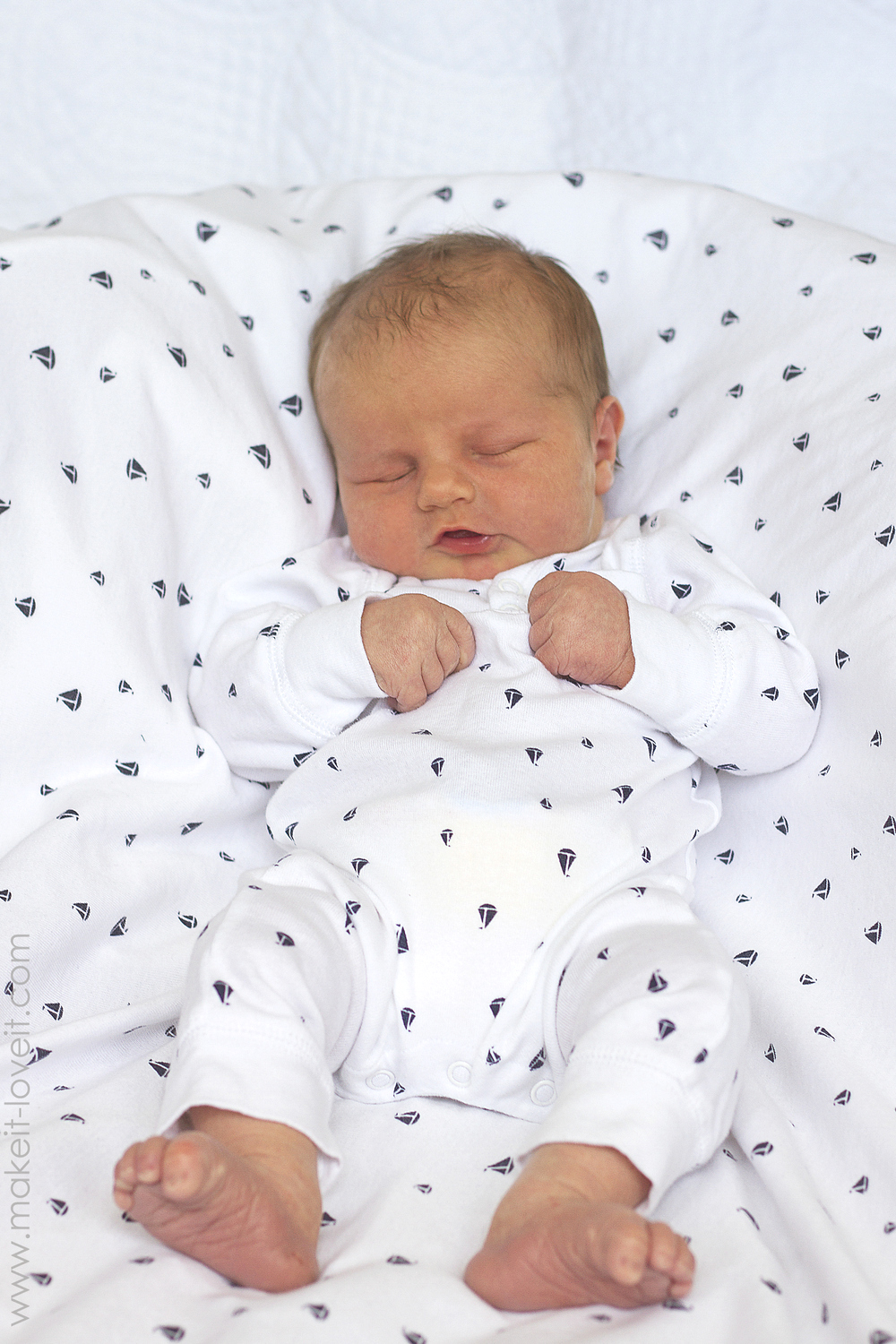 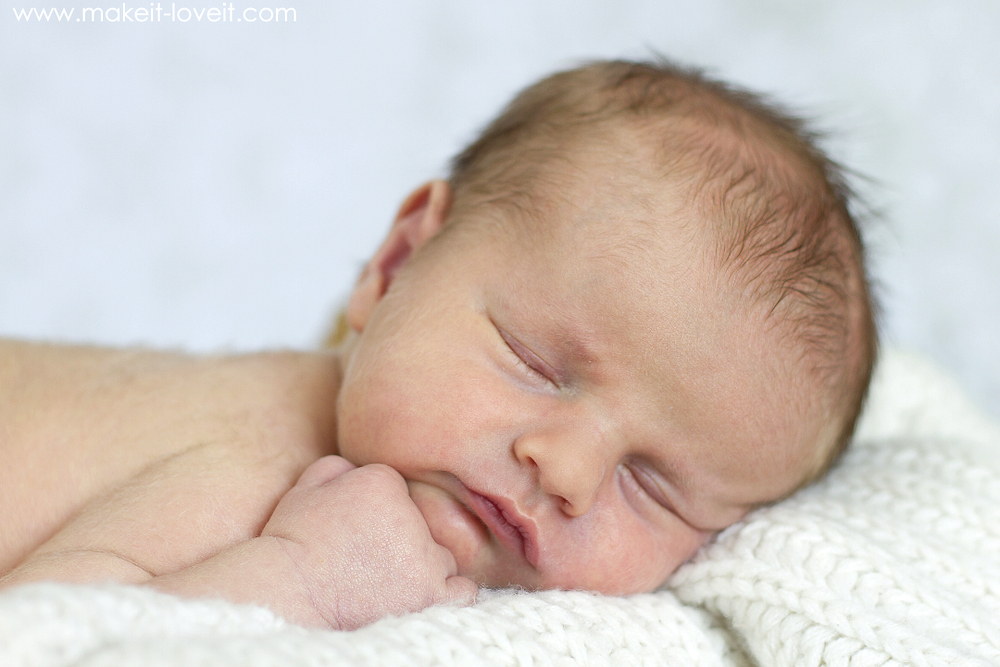 But he HAS turned into such a fun little one-year-old…..so it’s going to be okay! 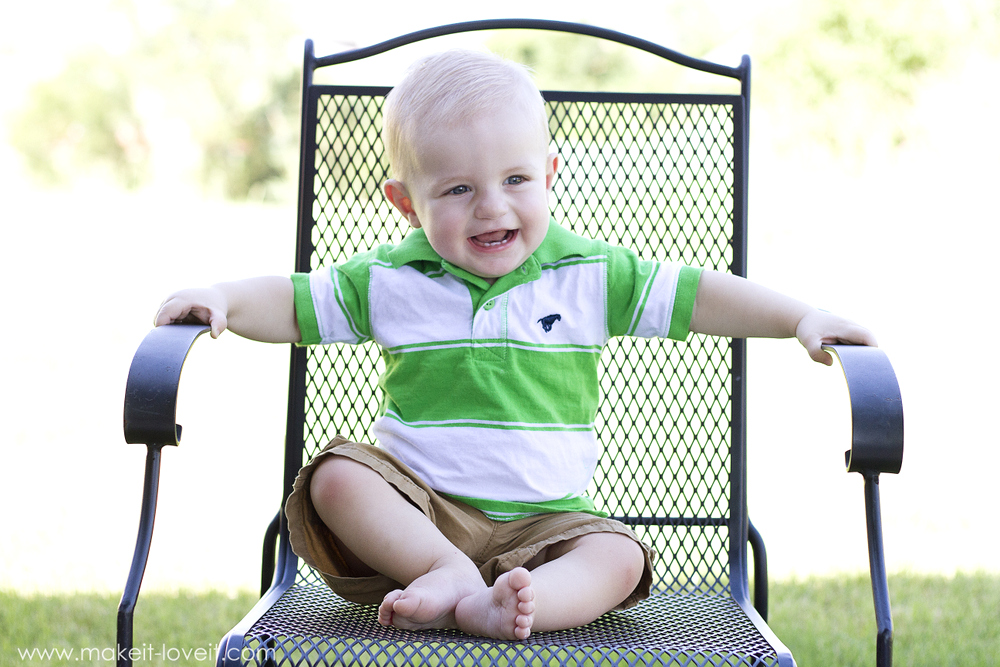 Oliver has been the most bashful of all my kiddos and will turn his little face away from strangers……but even sometimes when one of us walks into the room.  It’s kind of the most precious thing though, when he buries that little face into the crook of my arm or in my lap, when he’s unsure who’s trying to talk to him.  Sweet boy. 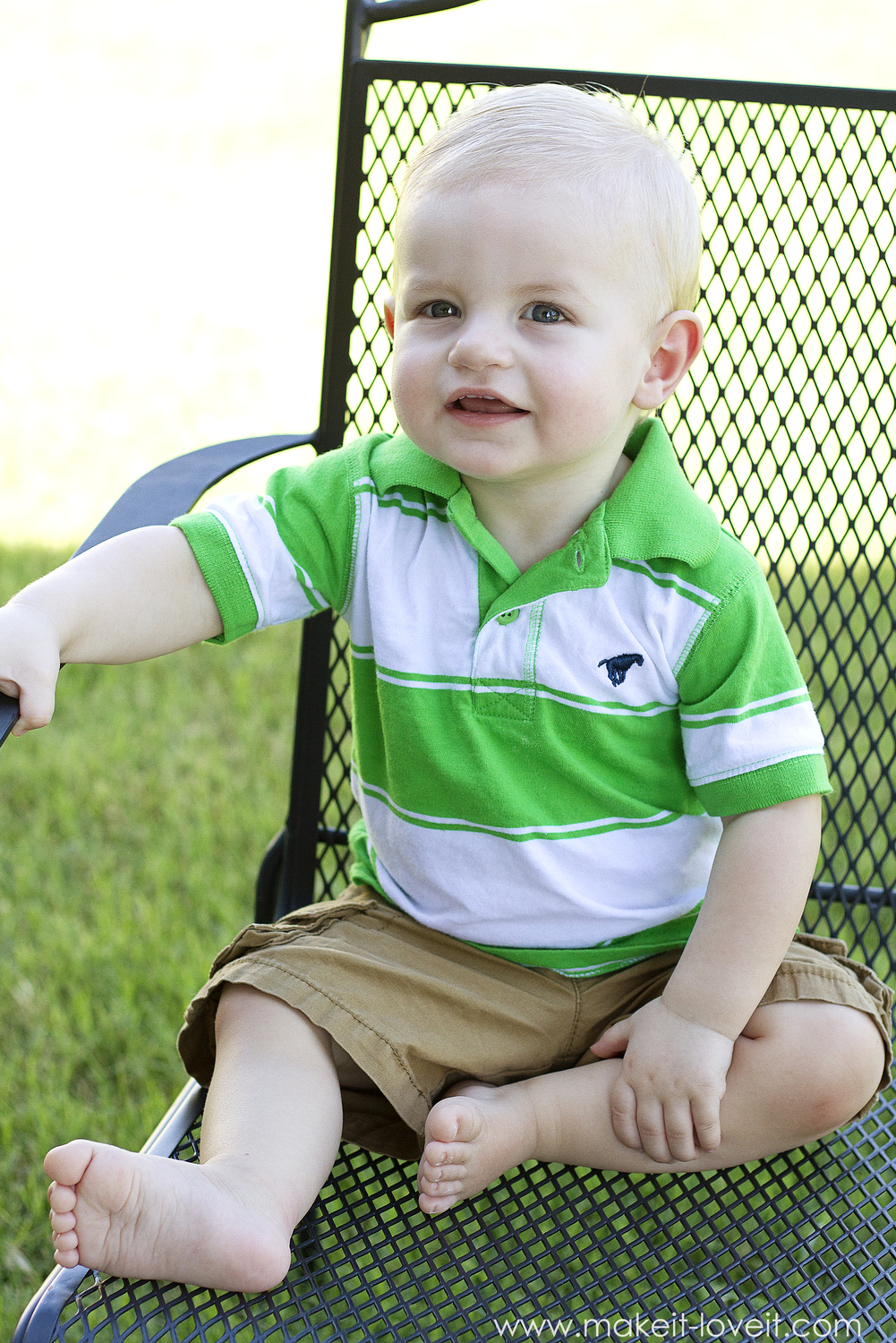 Ollie has followed suit after his big brother Connor…..and is a cuddler!  Thank the heavens above because a momma needs to squish on her baby!  Both Elli and Chloe liked facing outward and didn’t like to be smothered in the least….but my boys love a good head-on-the-shoulder snuggle! 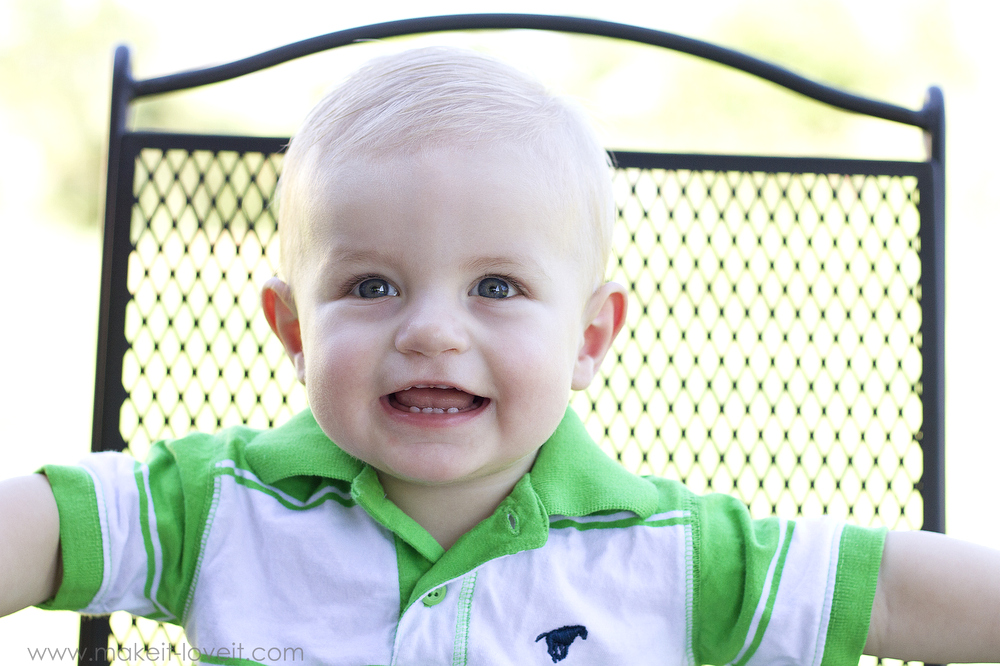 On his actual birthday, July 7th, Ollie was sick.  He had a fever and was so achey and sad.  The next day, he seemed a little better…..but still wasn’t himself.  We went ahead and had a little family birthday party for him and once he started opening presents….he cheered right up.  I mean, what’s better than pretty wrapping paper?!?! 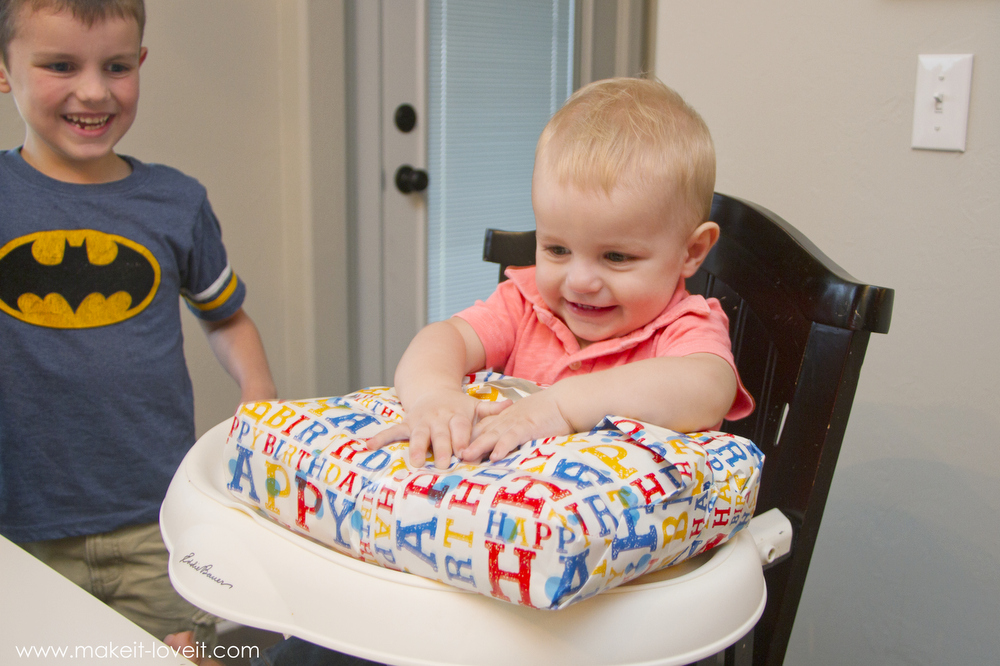 What he was unsure of, though, was that strange burning flame.  I think he could tell there was some sort of toy being carried towards him that he could probably snatch up into those chubby fists….but that little burning light was so unfamiliar.  And he kept his curious eyes glued to that flickering light. 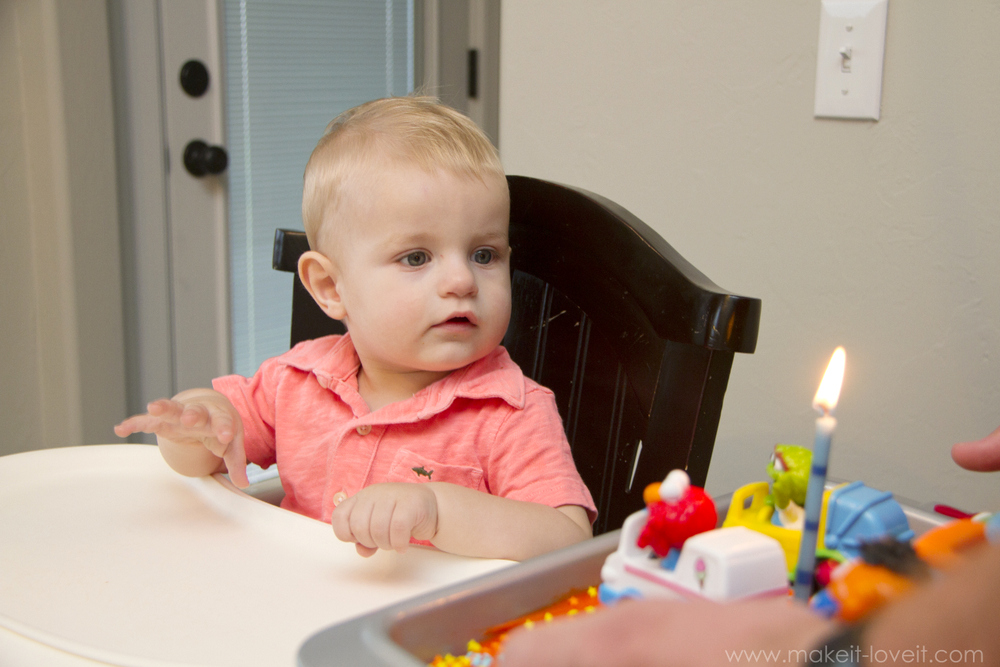 Steve helped him blow out the candle and he was still mesmerized by it all.  (Please don’t let this mean he’ll have a future fascination with matches and fire…..) 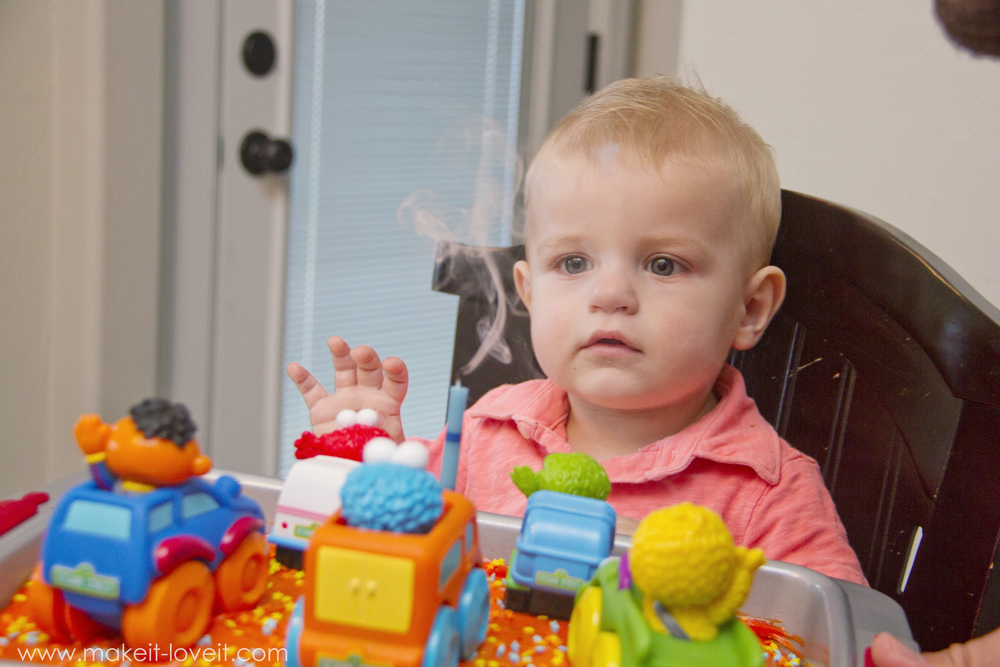 But then we got down to business and gave him his very taste of cake.

He wasn’t sure quite what to do with it……so he went ALL IN! 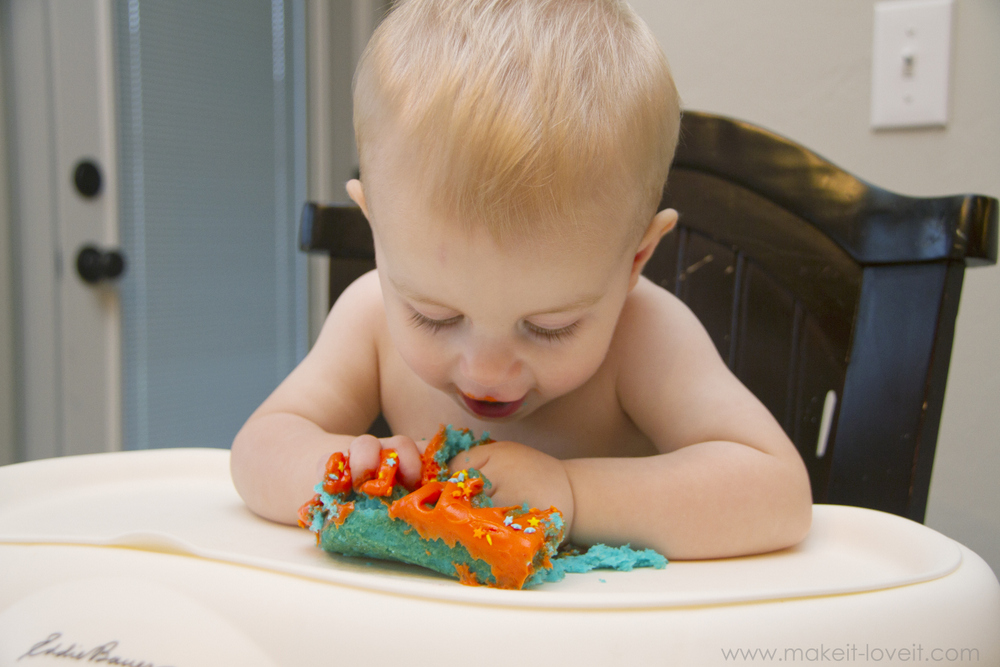 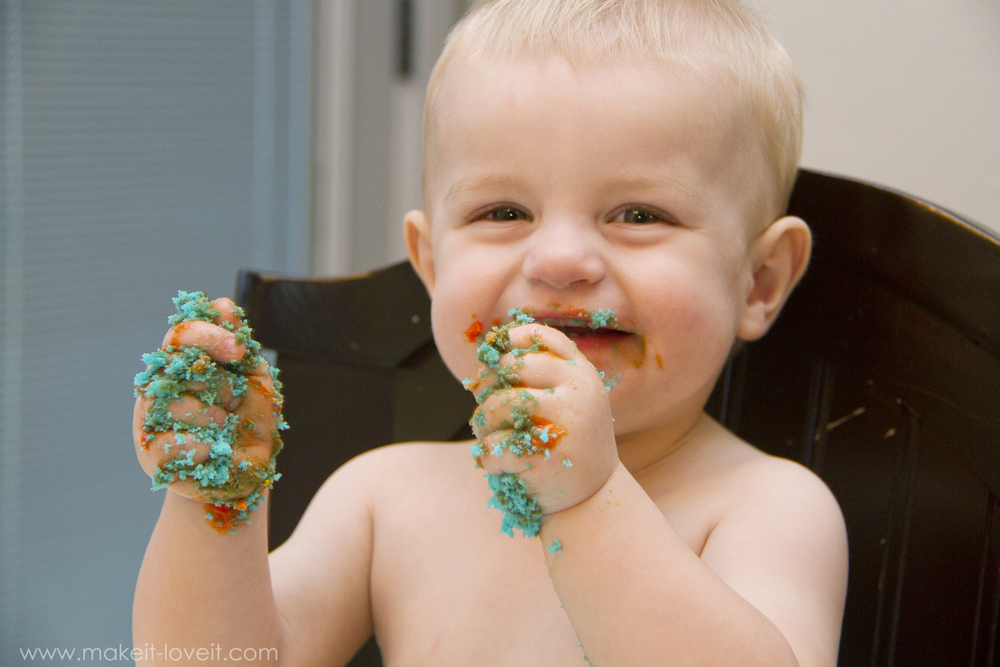 After that, we scrubbed him up and put him to bed!  He was beyond tired and needed to rest up before digging into birthday toys.  But don’t worry, he dug into those toys the next day.  And every day since.

Something fun that he got from us, are this big plastic building toys, that are magnetic.  There a balls and sticks…..and the magnet is pretty strong, so it doesn’t take much for him to realize they stick together. 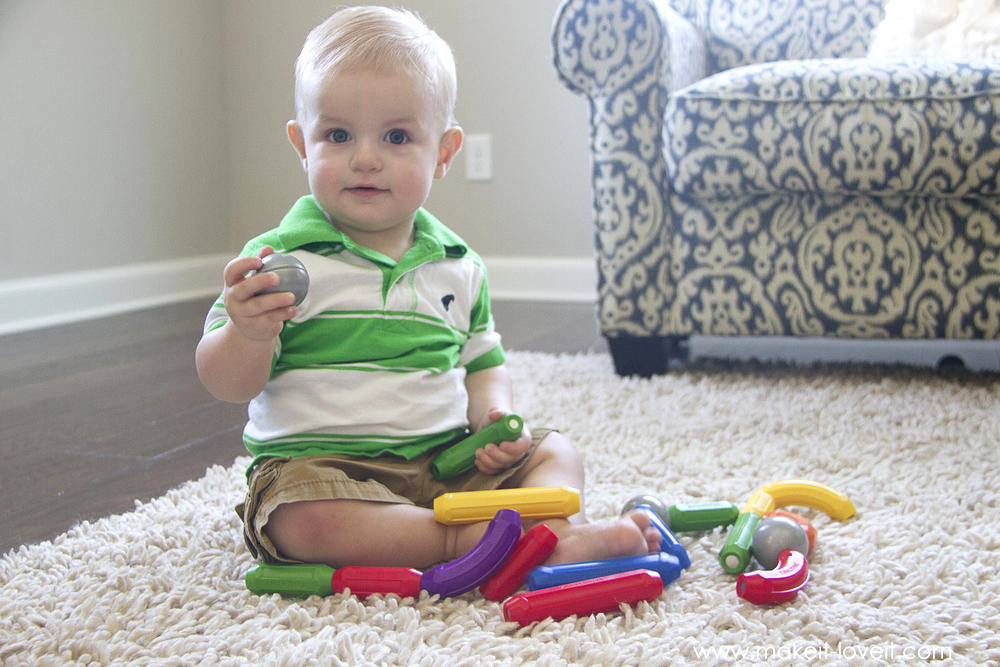 Even though the older kids like to actually build structures with these magnet toys, Oliver’s favorite thing to do is crawl around with two sticks in his hands and chase down all the little balls until they magnetize together.  Then he throws the ball and then hunts it down again.  Pretty funny…..and a really fun toy for this age.  (We bought them HERE.) 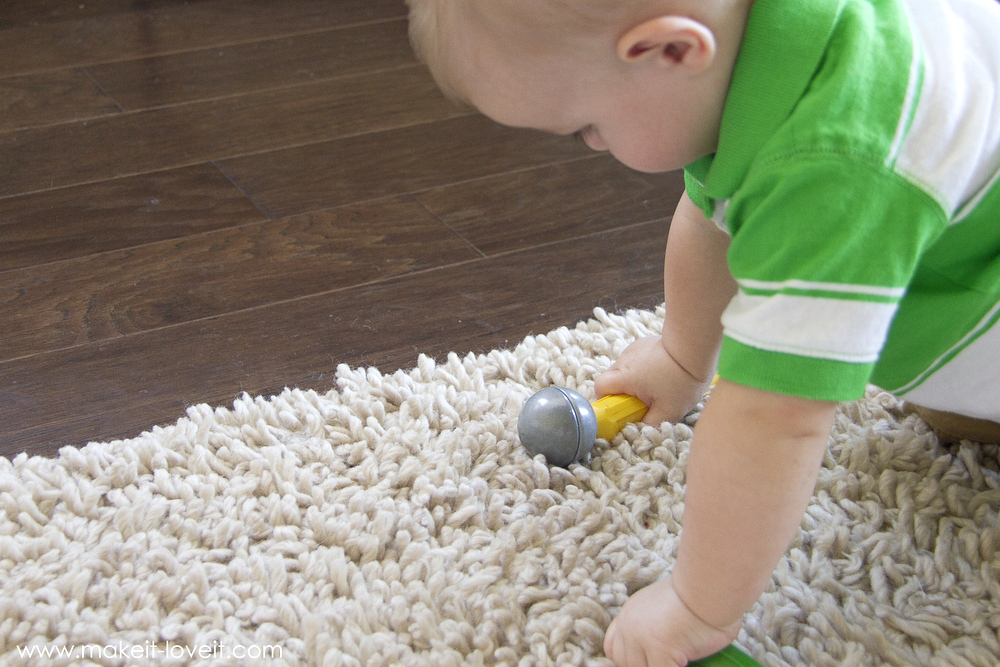 And because both my boys had birthdays this summer…..I took some pictures of the two of them together.

They are so similar…..yet so different, but gosh, I love these two boys! 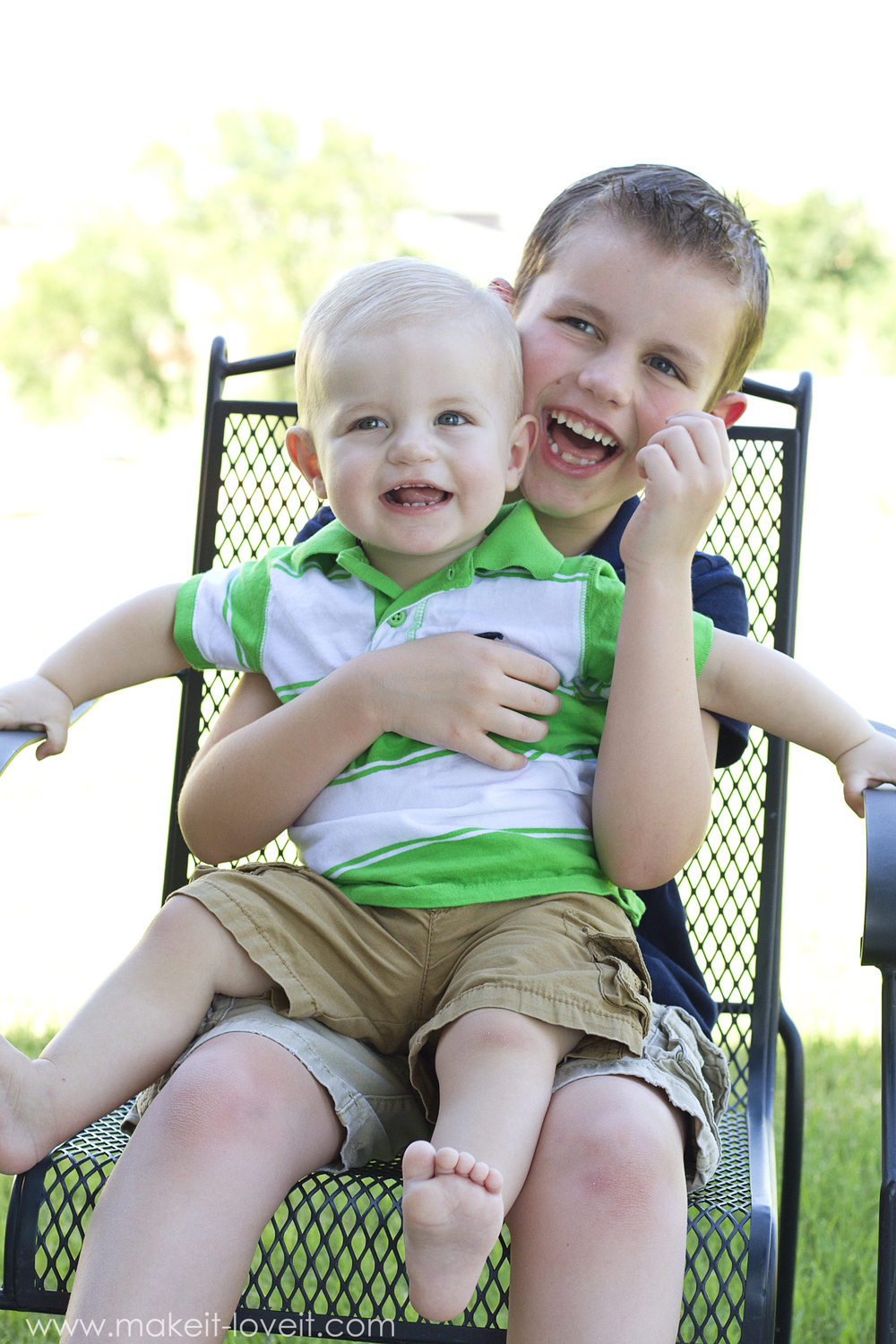 Connor can’t wait until Oliver is old enough to share a bunk bed with him……and even more excited for him to play big kid games with him.  I just hope he doesn’t change his mind when Oliver starts destroying more of his things.  But shhhhh….don’t tell him that! 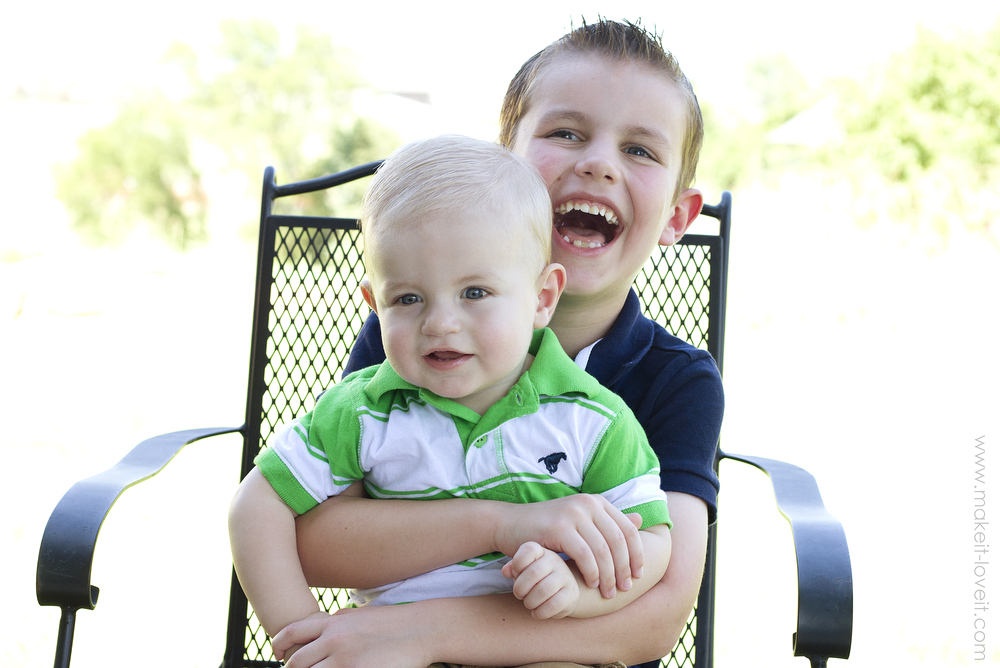 Happy Birthday sweet Oliver!  You make this momma so happy.  In fact, you make this whole family laugh, every single day…..and we absolutely love that about you! 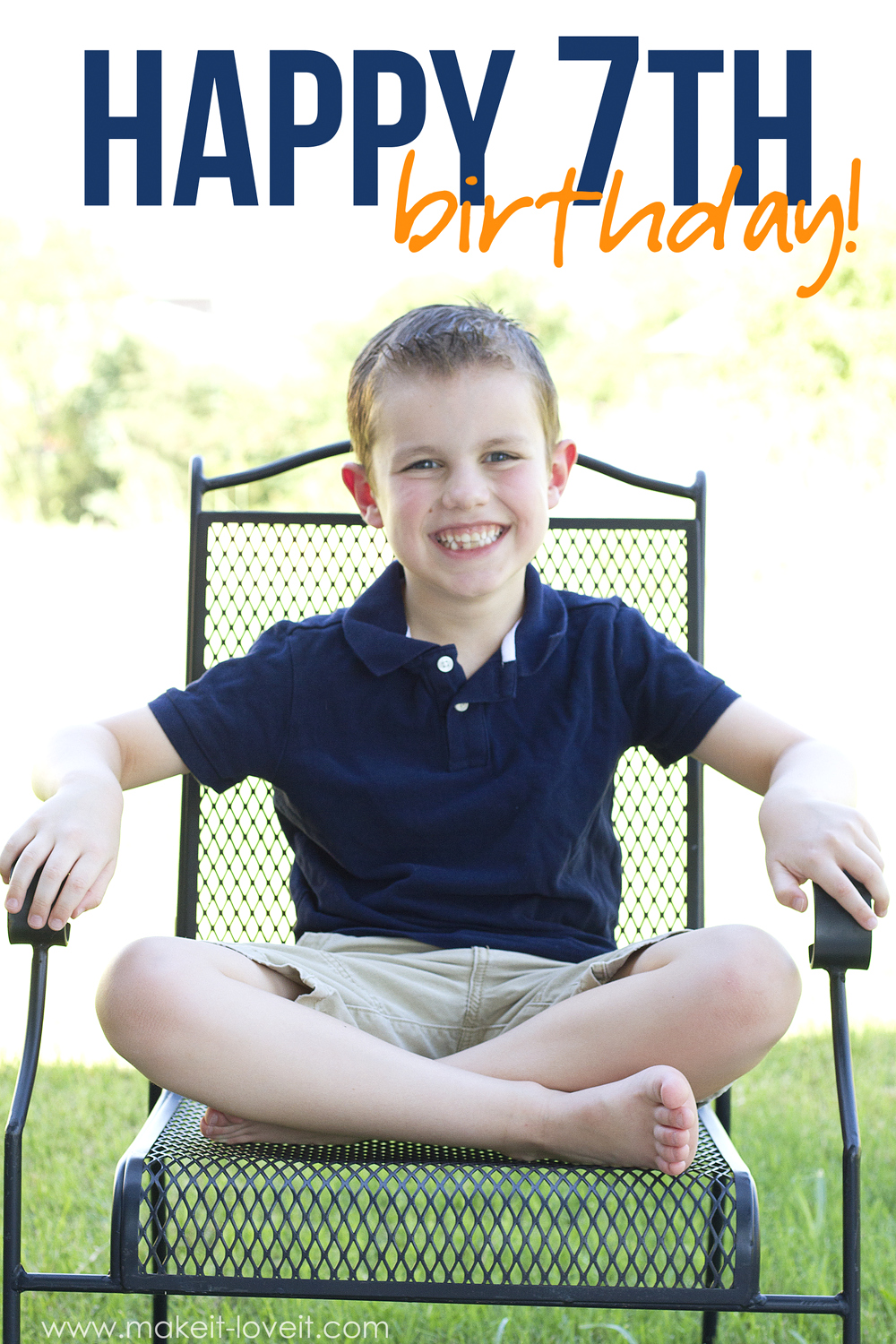 Next Post:
DIY Bean Bag Toss…fun for the whole family!