My kids somehow grew bigger and started yet another year of school.  Dang it, why does it always sneak up on me?!!  It’s not that I don’t want them to grow and develop, blah, blah, blah…..but I wasn’t finished savoring their most recent stages. ((sigh))  Man, I wish I could somehow bottle them up, so I don’t ache so much at the beginning of a new school year. But every time they have a birthday and then also at the start of each school year…..my stomach kind of knots up and my tears embarrassingly start increasing in production.

Okay, enough of the sad….because I really am so happy for these sweet kiddos!  We had such a full summer, which I’m so glad for, but it really had me scrambling for any sort of schedule.  You may have noticed a few less posts from me….but that’s because we jammed our days full of summer stuff.  And had some really great family time, which hallelujah, we really needed! :)

So, even though I never gave my written consent for it to happen, the new school year began. ;)

This very morning, in fact. 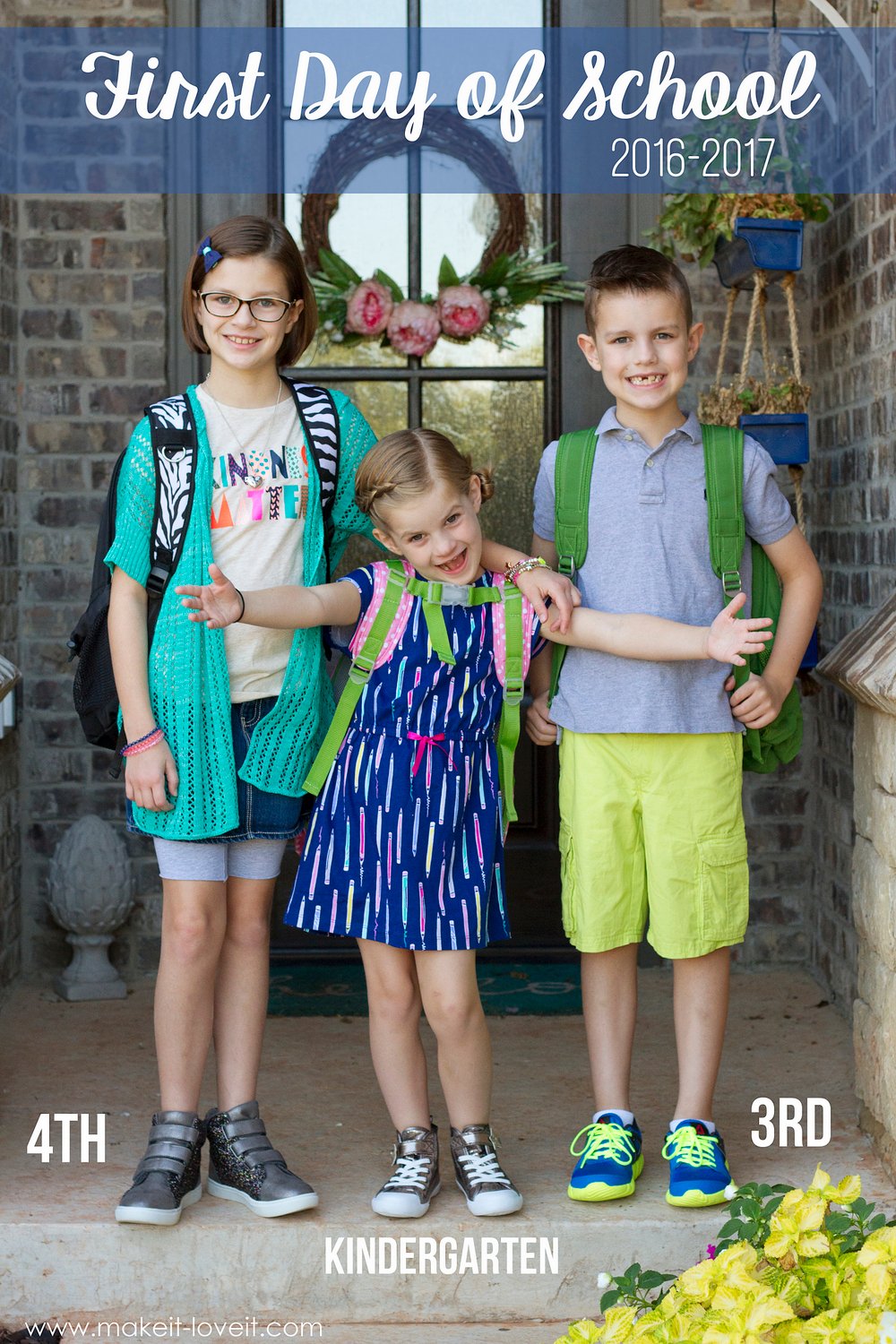 My sweet Elli (9 years old) is now in 4th grade.  And I swear, something happened in the last 6 months or so, and this little chickie morphed into an opinionated little thing, who has started challenging things around her, asks so many questions, is starting to gain so much confidence, and is still the best oldest daughter a momma could have! I swear, I wish I could duplicate the drive and loyalty that this girl has, and share it with the rest of us!  And whether I’m ready for this or not, she has developed her own style and is doing that whole “since-my-mom-likes-this-so-much-I’m-not-sure-I-do-anymore”  Dang.  It’s not terrible yet, but I was hoping I had a few more years before it started. ;)

Elli and I did a little school shopping alone over the summer and, uggggh—-not my favorite day.  She didn’t like anything we were finding.  We looked and looked at several stores and I suggested a trillion things….and all I got was a “meh” — for everything!  I kinda gave up and told her she could browse some things online back at home.  Before heading home though, I had to stop at one more store for myself.  And that’s when she randomly found those honkin’ huge sparkly high-tops that she’s wearing in the picture below.  Not my first pick, but when she saw them, her little eyes lit up and she clutched them in a tight hug and told me how much she “not liked, but LOVED them!”  Ha!!!  Okay—SOLD! :)  Then, it’s like a little candle was lit and she started finding shirts and skirts and sweaters and all sorts of things that spoke to her little pre-teeny-bop soul….and it was magical watching her have fun figuring out who she wanted to be.  I had to swallow my comments a few times though, as she held up things that were far from my favorite…..but I reminded myself that this child needs a little freedom in this department.  I can encourage, but I really need to let her do her thing.  (Man, that was really hard for me! Like, really hard.)  But finally, she found her groove….and I really loved watching it all unfold! 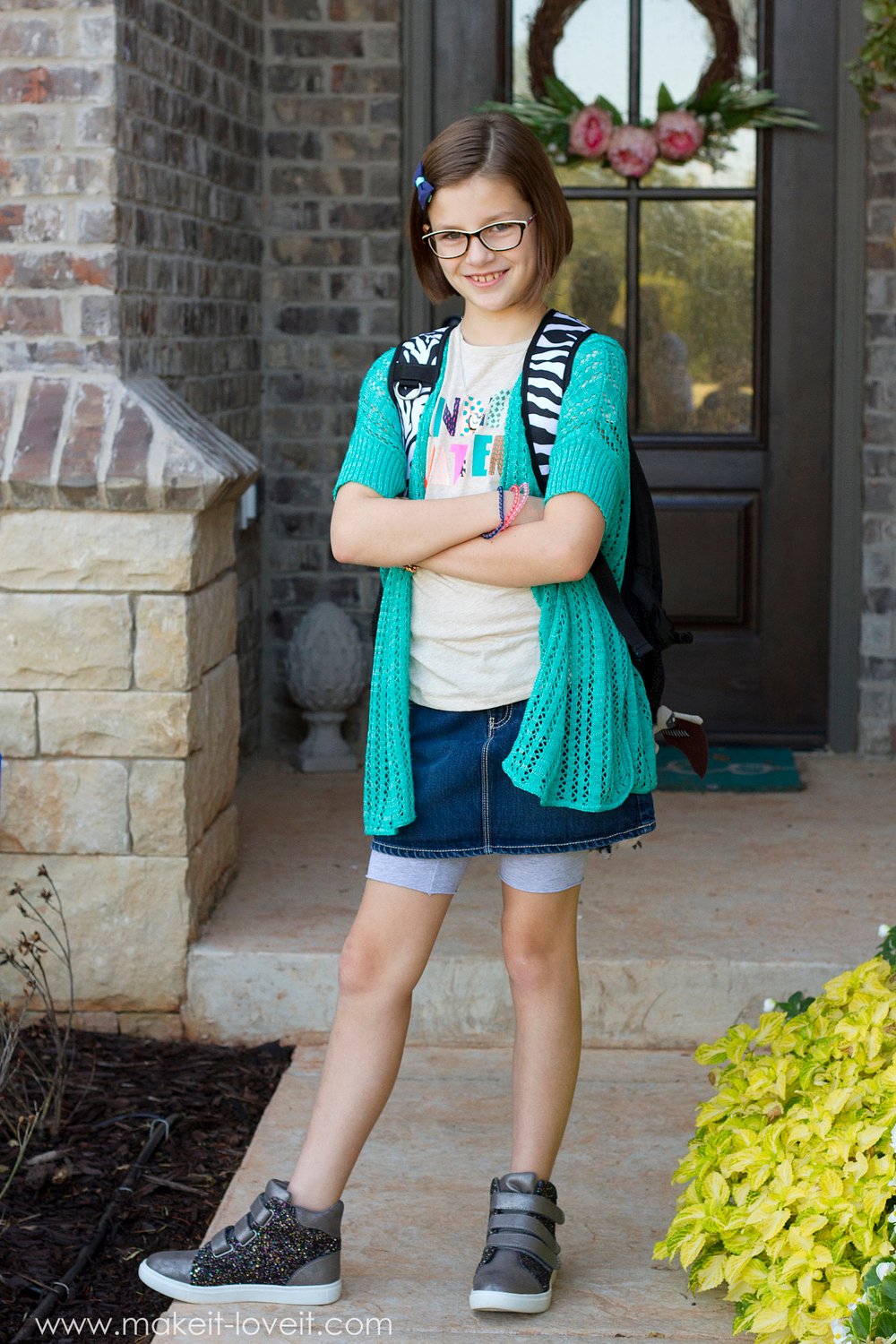 Oh, Connor.  This oldest boy of mine (who’s now 8) just started 3rd grade today.  Let me just say, that if you’d like to feel good about yourself, let me send this child to you for an afternoon.  He will love you, chat with you, and tell you how much he appreciates you.  I swear, the good Lord above sent me this child between my 2 girls, for a very specific reason.  He knew we needed his sweet little self nestled right in the middle of our family.

Connor is growing up though.  He is a chapter book-addict, loves Legos (especially with dad), loves to run, wrestle, swim and tease his siblings…..and gets along with any ol’ kid you throw at him.  He has been calling other kids “dude” lately, which always makes me laugh…..but man, this kid loves to be around people.  He had a rocky year last year in second grade with some real rascally classmates, but has been so excited to start 3rd grade because of recess, PE, computer lab, and his friends!! Haa….sounds about right! ;) 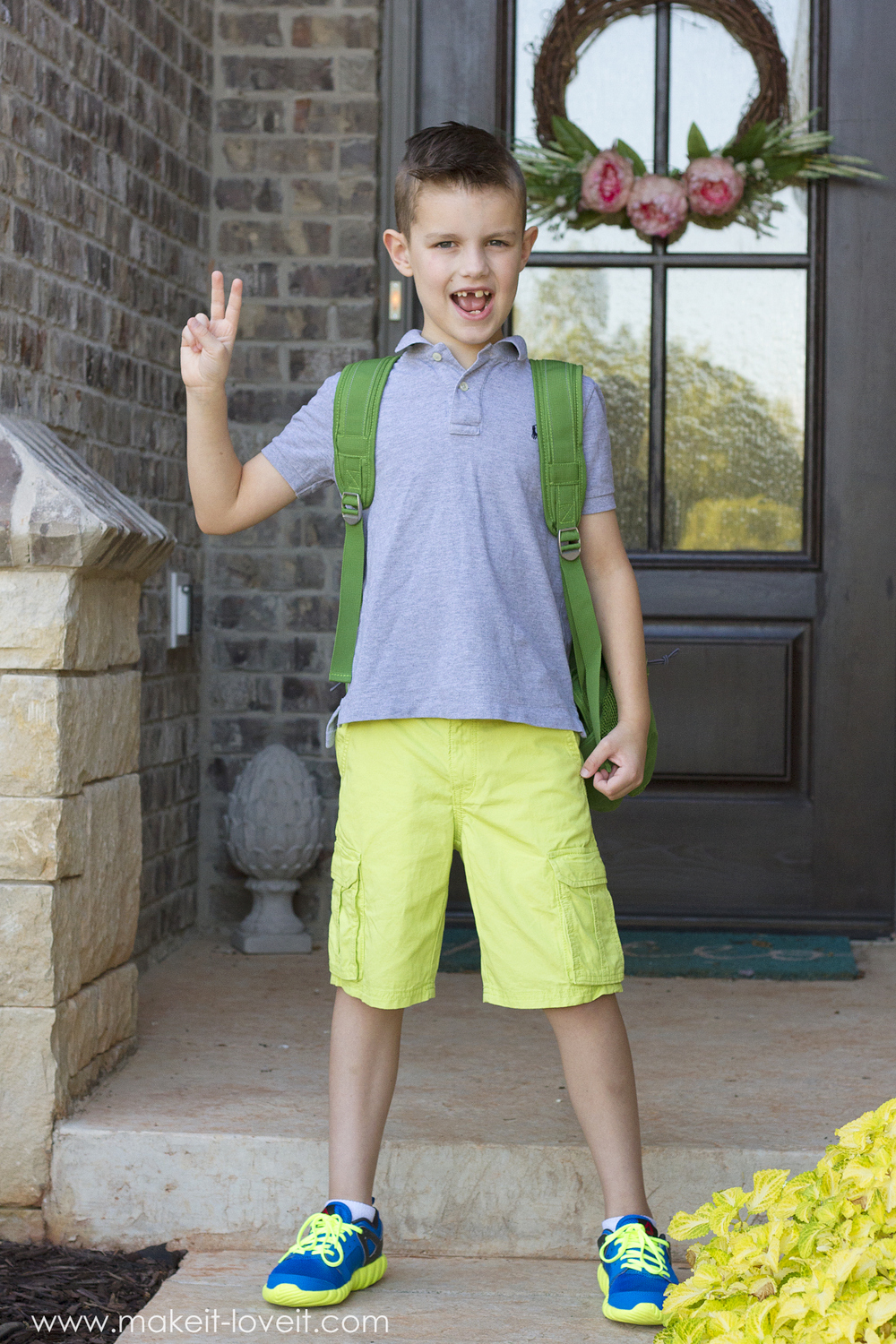 Our Chloe Bug is officially 5…and in kindergarten!  This one was a hard one for me to send off today.  She wants so badly to be big and brave and independent….but I’m not a huge fan of that! ;)  Coco is as silly as they come and LOVES to pretend and sing and dance and make up the biggest stories (i.e. lies) you ever did hear!  She is always trying to play with bigger kids, even if they are 10 year old boys!  She doesn’t care.  (Heaven help me!)  She hasn’t been one bit nervous for school…..only SUPER excited that she gets to eat in the CAFETERIA!!!  Yep, highlight of this child’s life! ;) 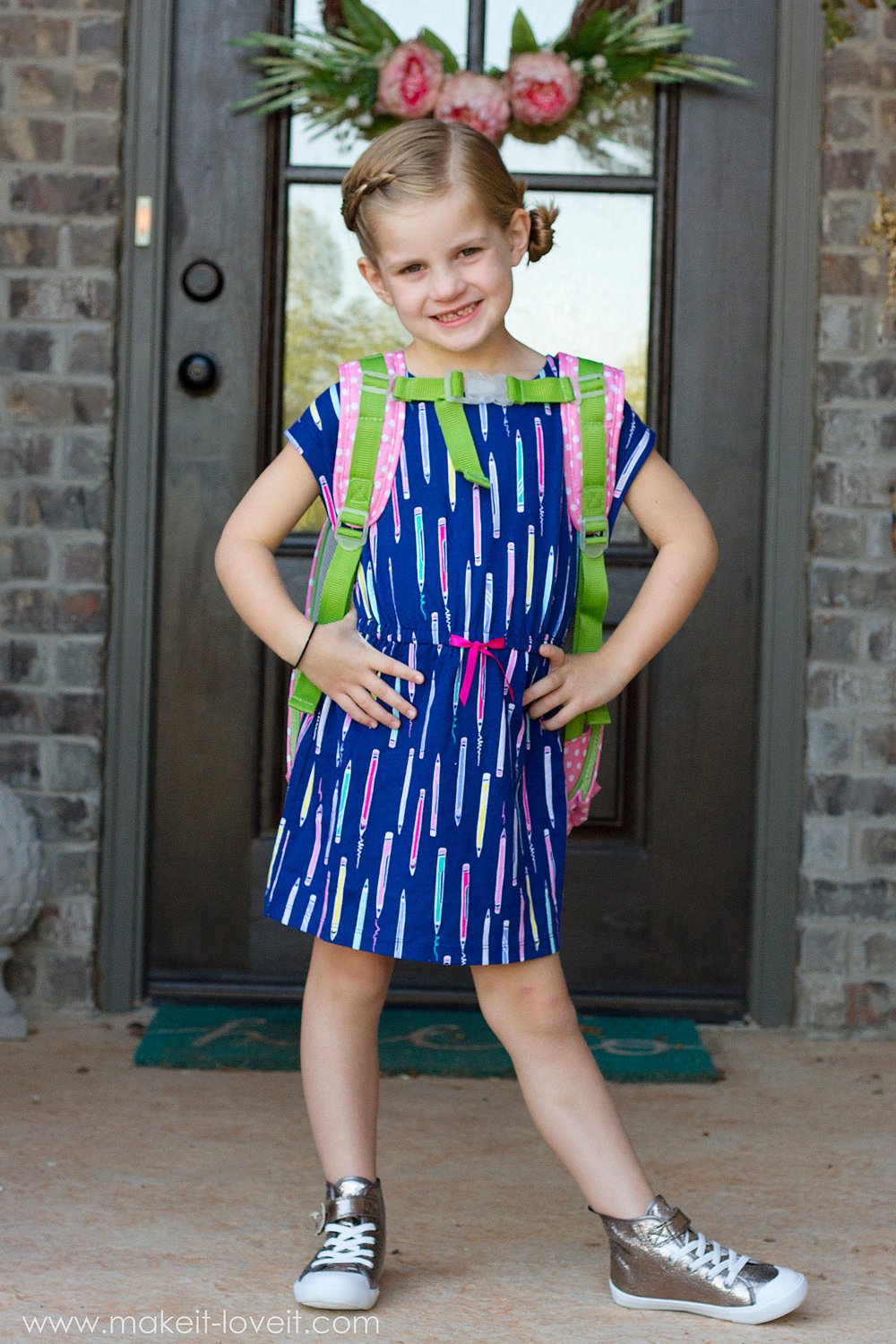 Once we got to the school, instead of any tears or pulling on my arm to come with her, she took her teacher’s hand and joined her class in the gym, at the end of their long line.  Parents were allowed to stick around for a while and walk to the classroom….but she didn’t know that.  She looked a little nervous but man, that child was so brave standing in a line with kids she didn’t know!

Finally, they headed down to their classroom in a line, and parents were allowed to follow.  She suddenly looked so big…..and the tears began.  I had to look up at the lights to scare those tears away but my gosh you guys, I still cry when I drop my kindergartners off.  Such a weirdo. 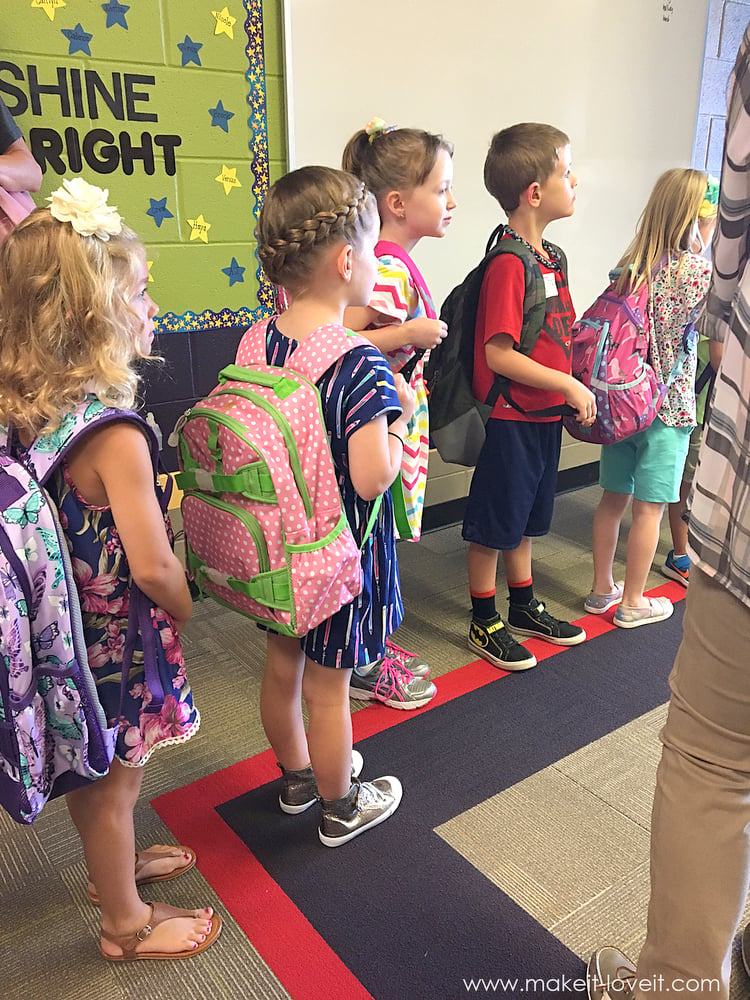 Once in the classroom, Coco had to find her cubby and hang up her new polka-dot back-pack.  I know she was feeling a little nervous, but also SO BIG! :) 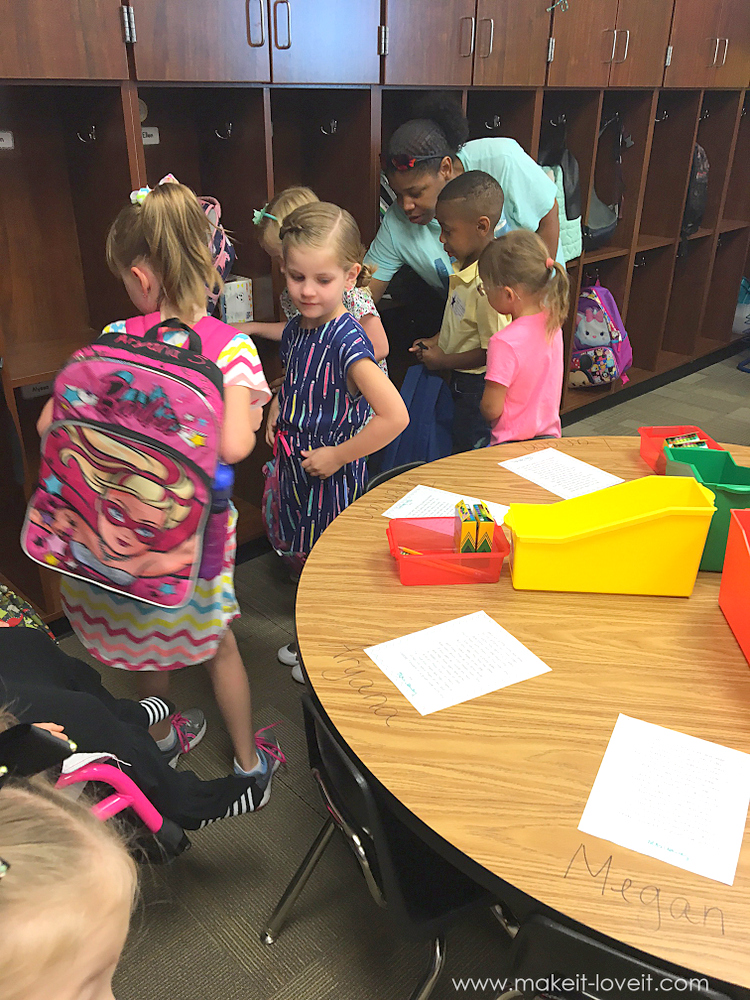 Once she found her name drawn in dry-erase marker on a table, she sat right down in her chair.  I’ll have to ask her when she gets home but I’m almost positive she was excited to be sitting right next to that little girl.  I whispered in her ear to be brave and be sure to tell that little girl her name after all the parents left……..and she looked up and me and smiled.  I know she’ll probably do just that. :) 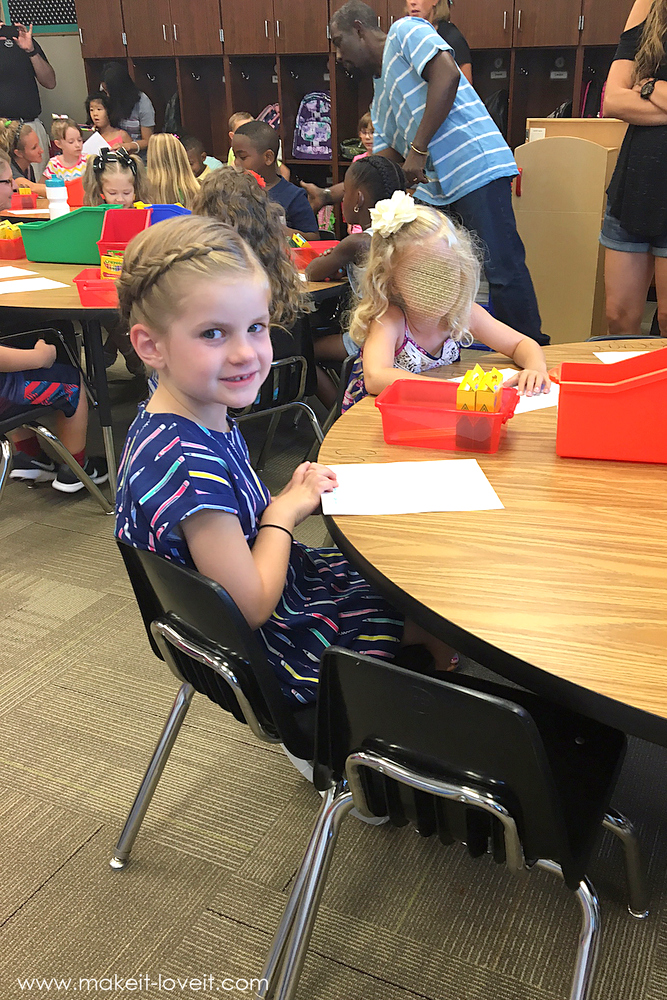 Before leaving, Chloe chatted with Oliver for a second and told him he had to go home and play with toys, while she stayed there.  He was pretty clueless about what was going on….but she loves to “mommy” him and tell him things will be okay!  Melts me every time. 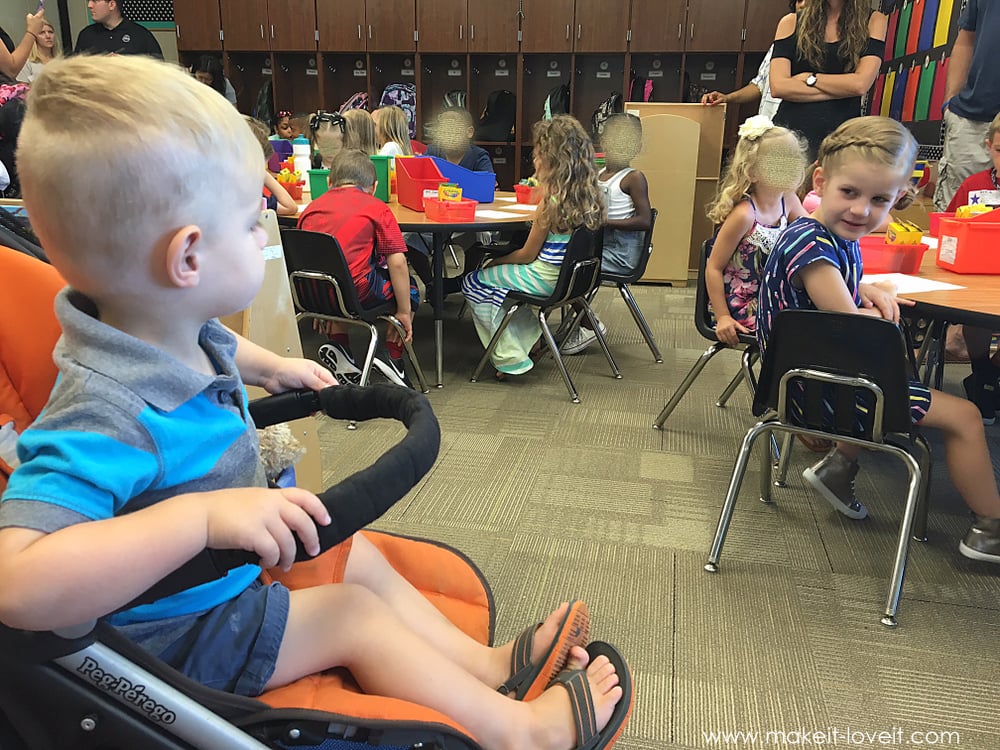 Oh, this girl!  Even though her allergies started up again yesterday and her eyes have been red and puffy and the sneezing has been full force, she wasn’t letting anything stop her from becoming a “big girl” today! 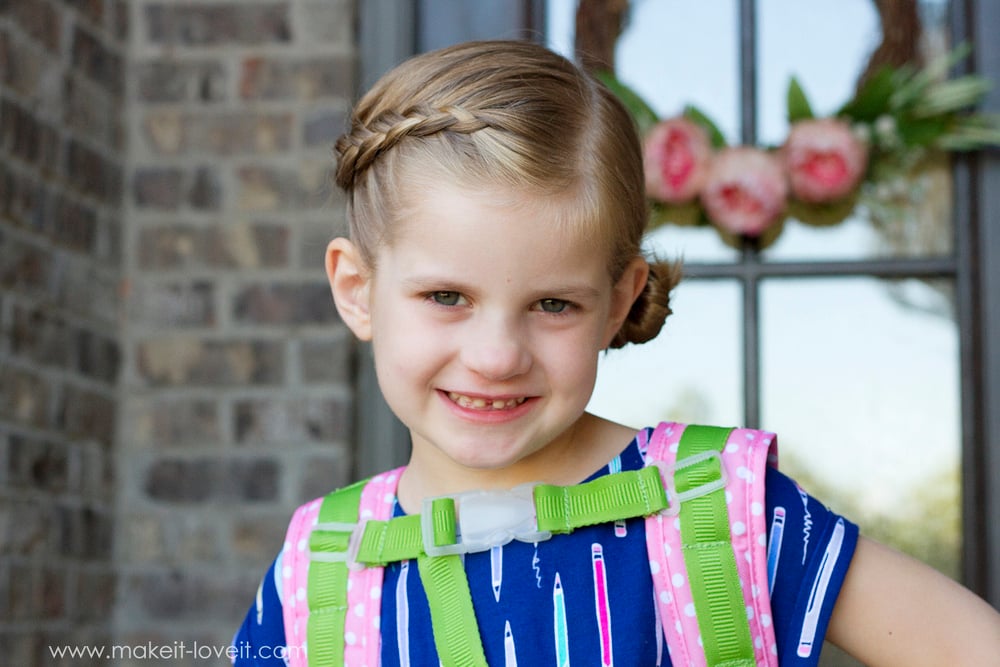 Meanwhile, back at home, Oliver has declared ownership of all things that previously belonged to the older kids.  Connor doesn’t generally like Oliver playing with his books but hey, if you leave them out……this momma let’s the “baby” get away with it!  And I think Oliver secretly loved having every ounce of my attention today! 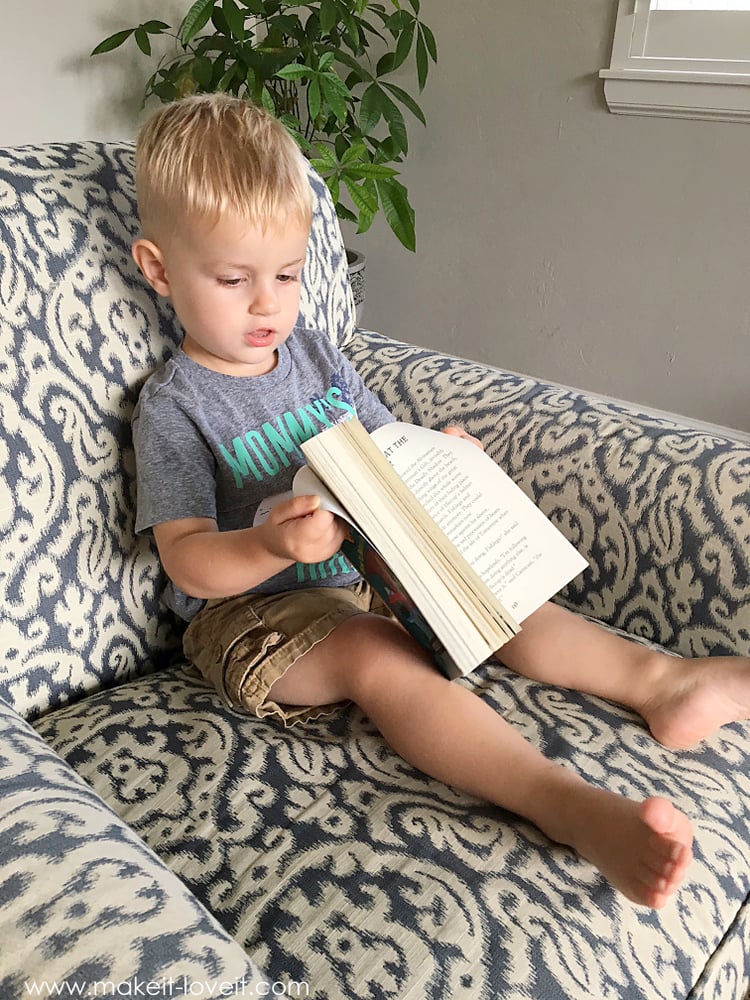 Oh, and real quick…….a friend passed along the sweetest story about being brave at school.  (In case you’re interested, it’s this one.)  And we talked about how, “being brave means doing the right thing, even if you’re scared”.  Sometimes school is tough.  And kids can be cruel.  But I wanted them to know that even if the other kids are doing it, to be careful about the things they say, because cruel words can last for years. (I told them I still remember some of the mean things I heard as a kid….and they couldn’t believe that!)

This same friend of mine also shared an object lesson that we then did too.  I had them squeeze out all the toothpaste from their own tube,…..which they thought was so fun!  Once it was all completely out, I told them to now put it back in.  “That’s impossible!”, they told me.  So, then I explained to them that the words that come out of our mouths tend to come out quickly and easily…and sometimes seem fun or funny.  But once they’re out, they’re out for good.  And words can be so hurtful.  We talked again about being brave and kind to others, even if everyone else has joined in, and it feels scary to be the brave one. 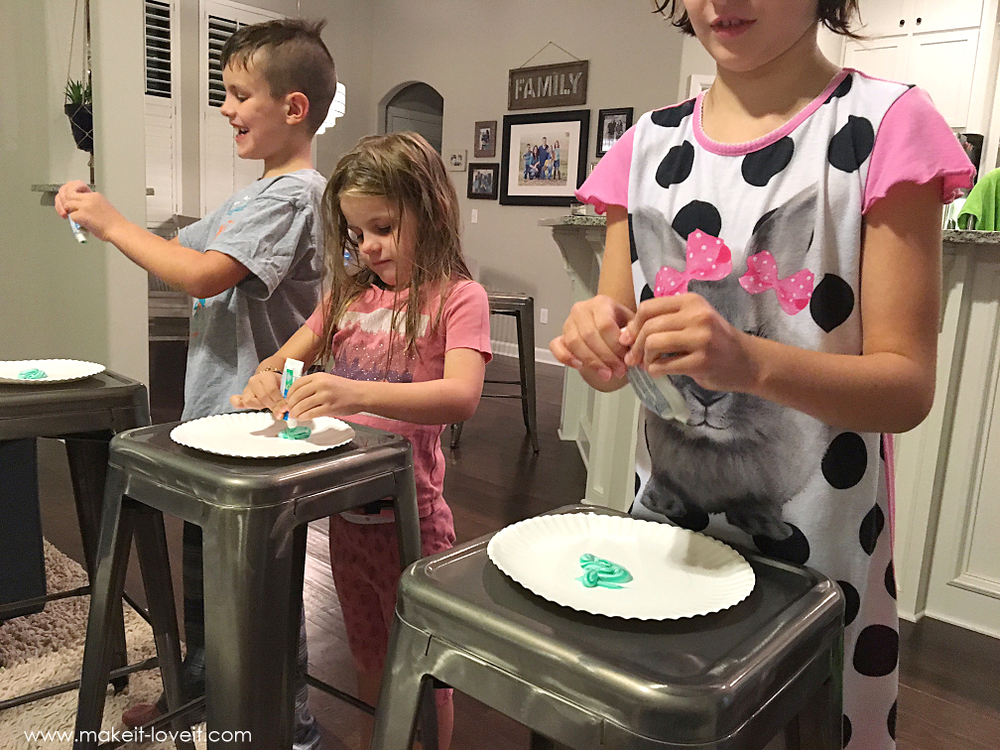 Ahhhhh, these kids.  I love them with everything I have.  I definitely had my days of frustration this summer when arguments happened and messes were everywhere, but when it comes right down to it, I always mourn the first day of school.  But these little people will do great! 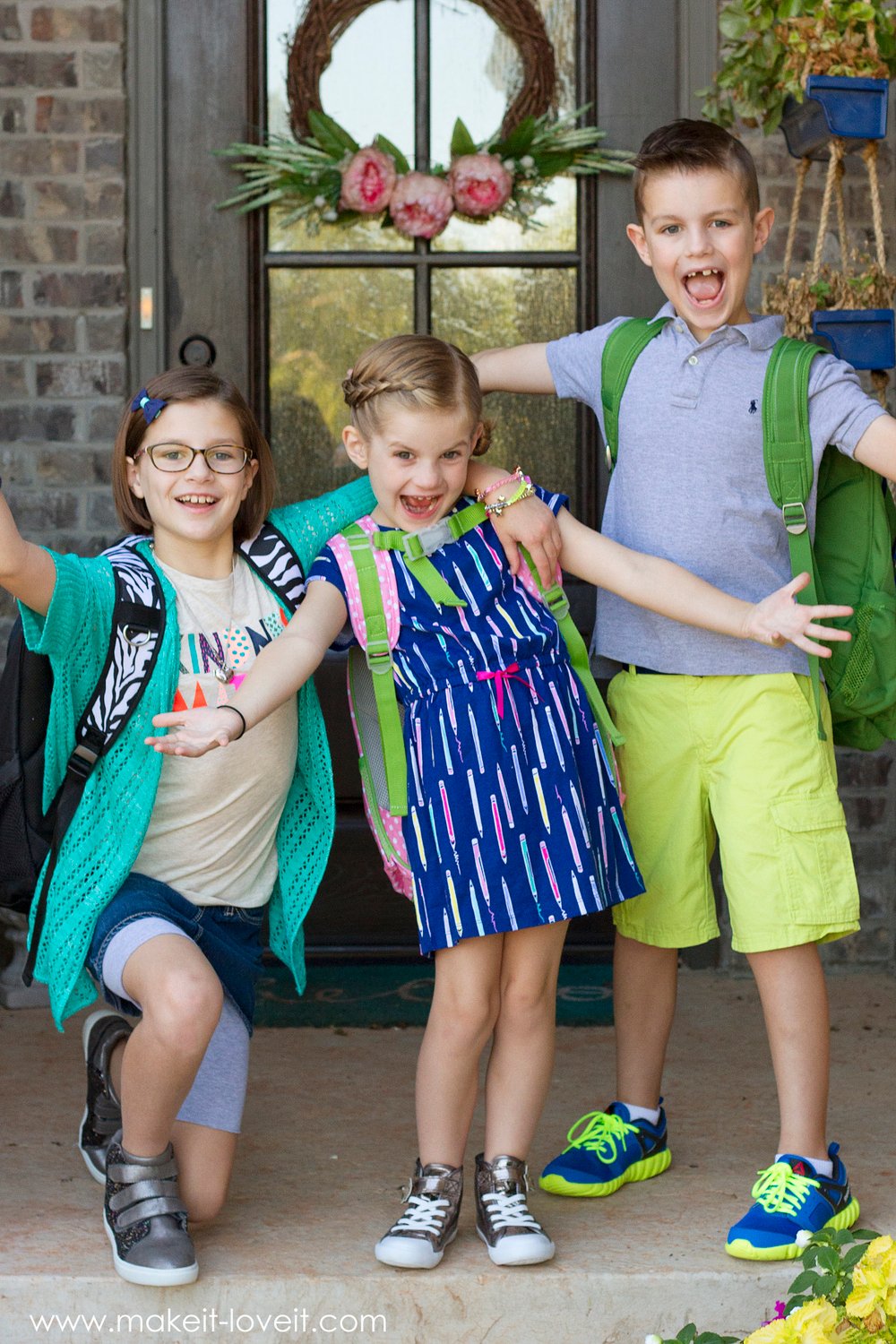 Okay, I wasn’t even expecting to type out all of those feelings.  But it’s been a while.  And it just leaked right out!  So thank you blog friends, for hanging in there while I get back on track and start sharing projects again like normal!

I have piles of fabric to start sewing, and lists of ideas I want to try to create.  My brain hasn’t turned off and I can hardly wait to jump right back in!

Oh, and if you’ve sent kiddos off to school (or will be soon)…..best of luck readjusting!  And if your kids are grown, please tell me this gets easier! :)

Ashley Johnston is a professional DIY costume maker, sewist, crafter, and owner of Make It & Love It. She is a mom of 5 and a wife to a very patient (with my craft clutter) husband. In case you’re wondering, she always chooses crafting/sewing/designing over mopping/dusting/wiping base boards……but bathrooms/laundry/full bellies are always attended to. Whew!
Author Bio Box by HOI
Author:
Ashley Johnston
Categories:
Mentions:
Not Specified
Keywords:
Not Specified
Last Updated:
August 19, 2016 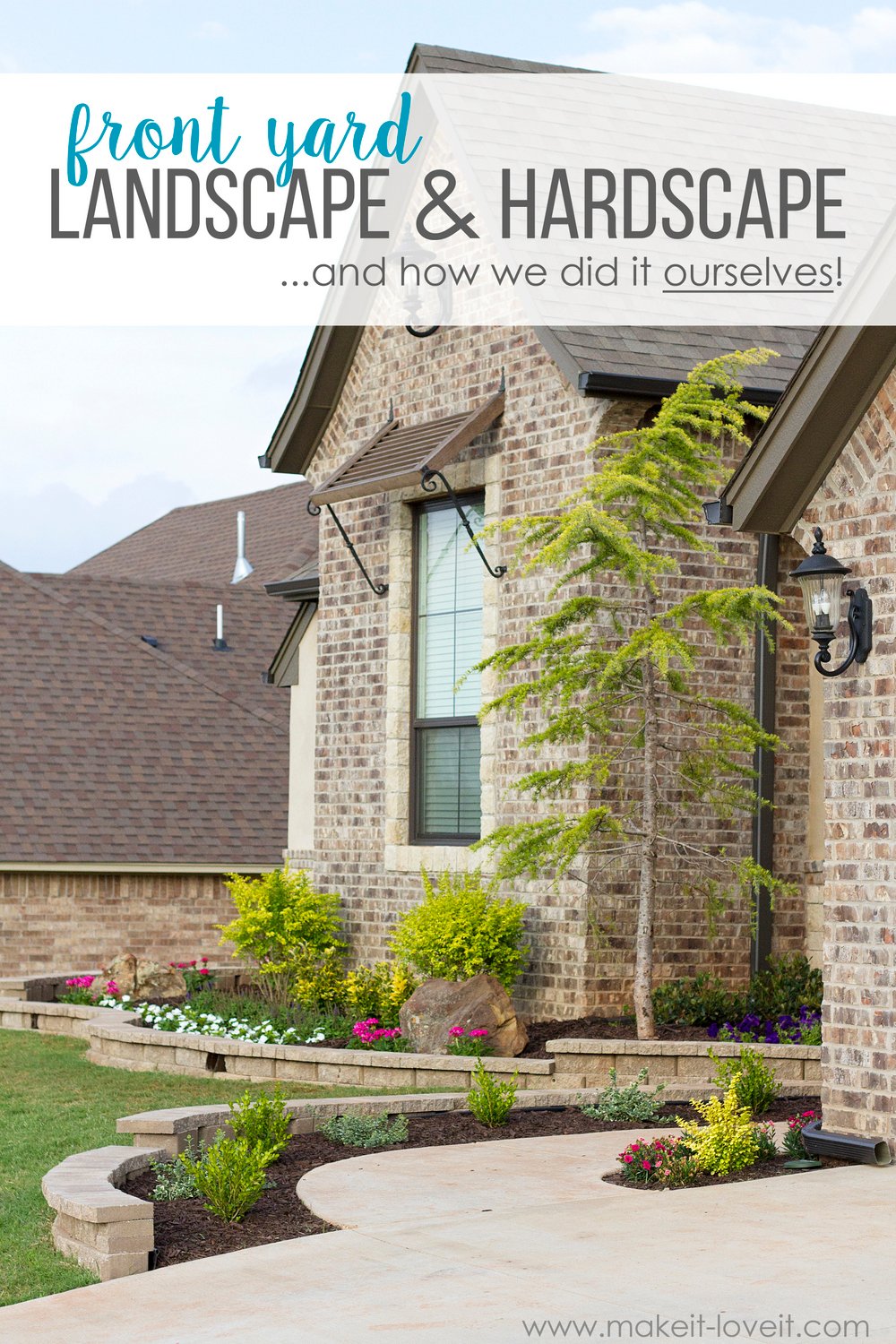 Previous Post:
How To Landscape & Hardscape a Front Yard (…from our experience!!) 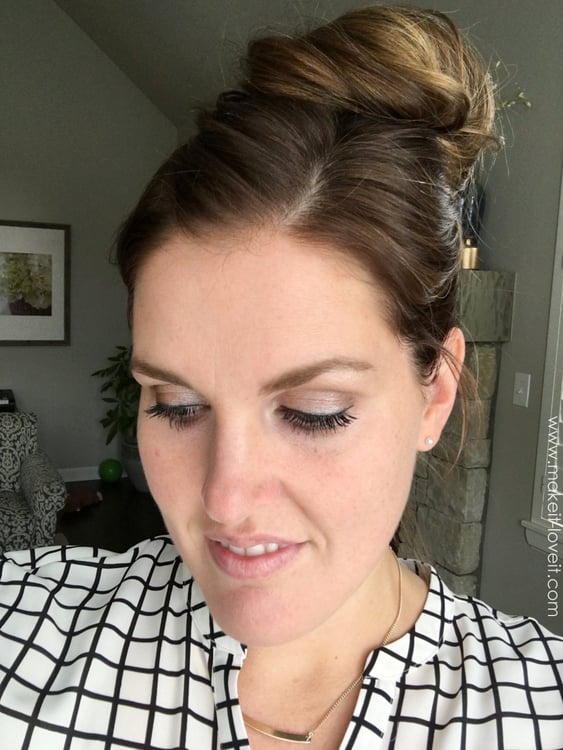