This summer has sped by faster than any summer before.  Is that normal?  Do they keep speeding by faster and faster as your kids get older?  If so, I’m filing a complaint! ;)  No, but really, we didn’t do everything we wanted to do this summer…..and I still don’t feel fully moved into this new house.  (Remember, we moved to Oklahoma last spring…)

Even though I begged them not to, the kiddos grew over the summer. And have been so excited shopping for classroom supplies, new shoes, and a few new items of clothing.  I also finally let them buy new backpacks this year.  I bought their only other backpacks when Elli was in Kindergarten and Connor was in preschool.  Those suckers have lasted for 3 years of school and probably would have lasted a 4th year but they were a little on the smaller side AND they were all begging for a new backpack.  (It’s true…the more expensive Pottery Barn backpacks really DO last longer!)  So, I told them they each could have $15 to spend on a new backpack……and sure enough, they found one! And boy was it hard to just let them pick what they wanted and not try and persuade them to pick something a little less obnoxious.  I have been trying REALLY hard to let them make their own personality and style choices (especially Elli, who’s the oldest) but for goodness sake, why do children’s companies toss everything they can onto one backpack?  Or shirt?  Or pair of shoes?  Wowza!  But okay Elli, if you want a My Little Pony backpack slathered with every color and sparkle of the rainbow, including motion sensor blinking lights…….GET IT!  Oh, and should we talk about those high-top bling-ed out sneakers while we’re at it?!!  ((Oh boy….breathe Ashley.))  But I have coached myself the past few months into just letting her embrace that little 8-year-old style she has growing inside of her, let her test it out, and see how it feels on her.  (And then, for the love, please pass this phase quickly! It’s hurting my eyeballs!)

Anyway, back to the whole point of today’s post (wow….I had no idea I’d go on and on about giving children style choices), my kids started school yesterday!!!!  Elli (8), Connor (7) and Chloe (4).  Oh my heart…my babies are getting so big! 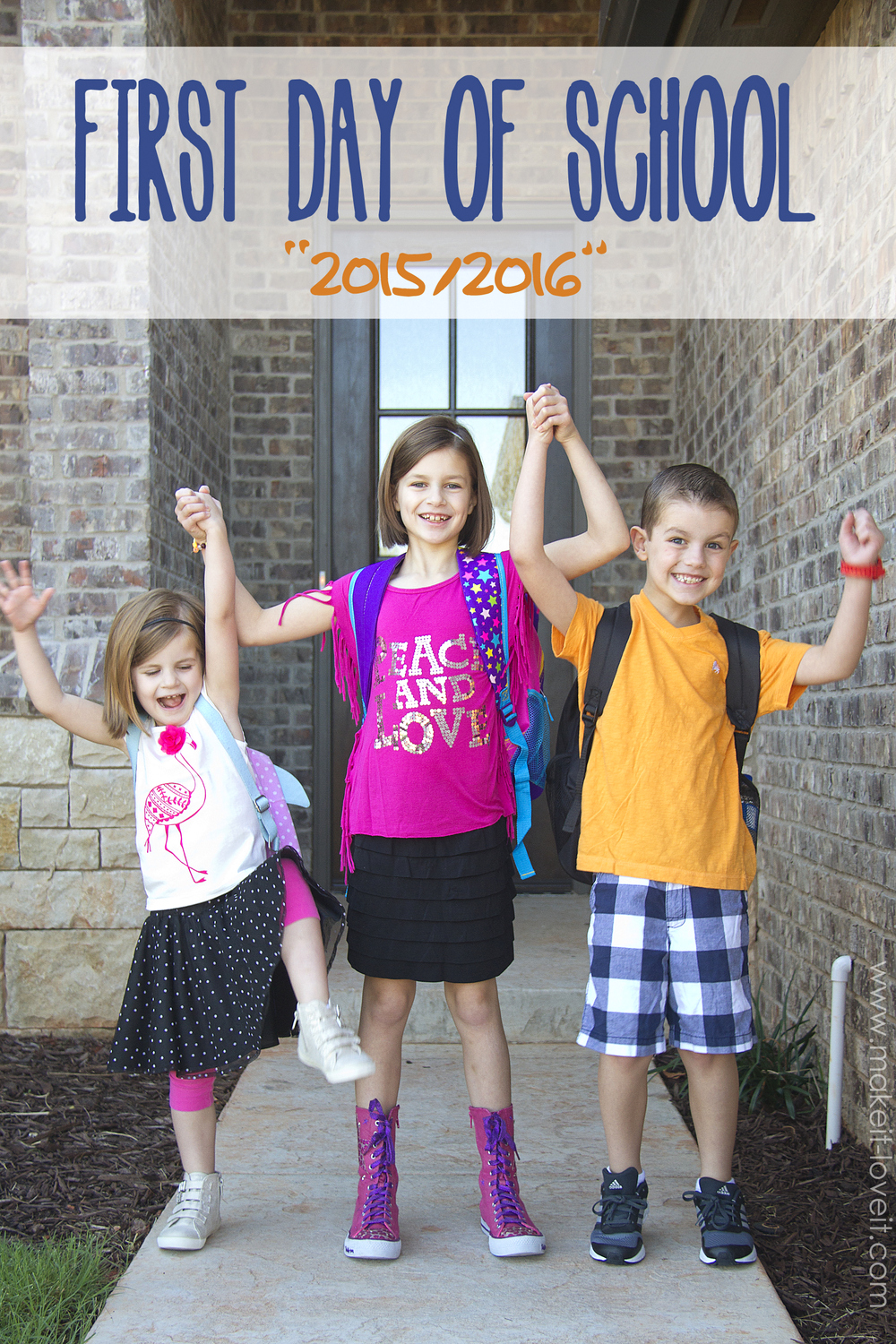 Since we moved here last spring, they are excited to not be the “new” kids anymore.  They are starting a fresh new year, just like everyone else…….and they’re THRILLED!!  And yep, a 3rd grader, a 2nd grader…..and haha, sweet Chloe is trying to make a “P” (for Pre-K) for the camera.  So big.  All of them. 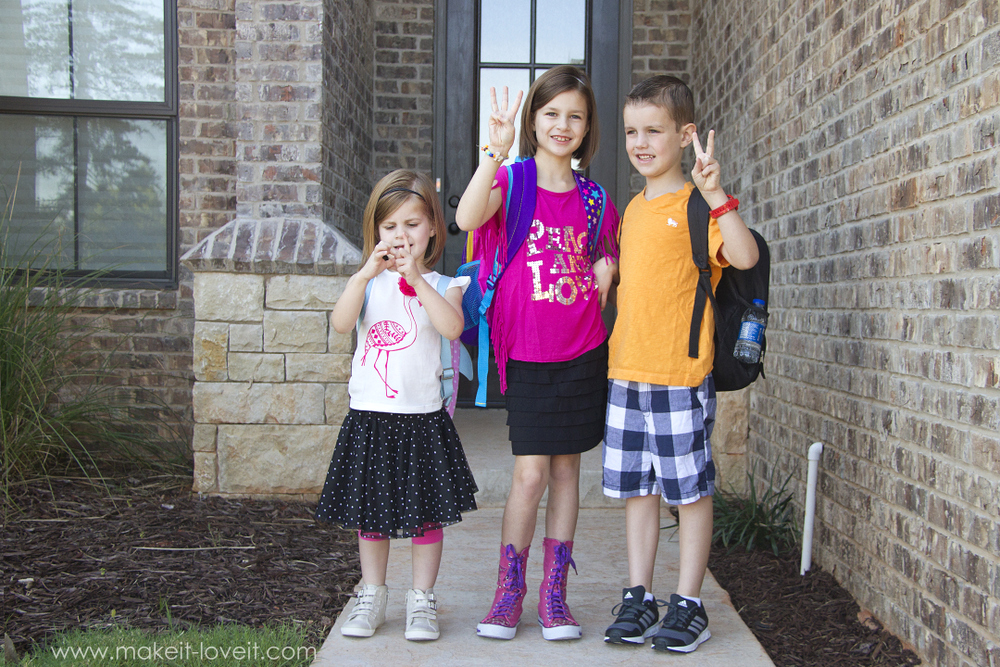 My 2 girls, Elli and Chloe, have very different personalities.  When Elli started school, she was very apprehensive.  She told me all of her worries and how she wasn’t sure what to say to make a new friend.  She was so brave on her first day of school back in Pre-K and then in Kindergarten, but has done really well since.  But she really has had to work at it.

Now Chloe — she has been begging to go to school for over a year now, and has been planning out her future friends’ names, imagining how beautiful her teacher would be (turns out, she’s actually young and adorable…whew!), what games she’d play on the playground, etc.  She hasn’t been one bit nervous.  Only 2000% excited! 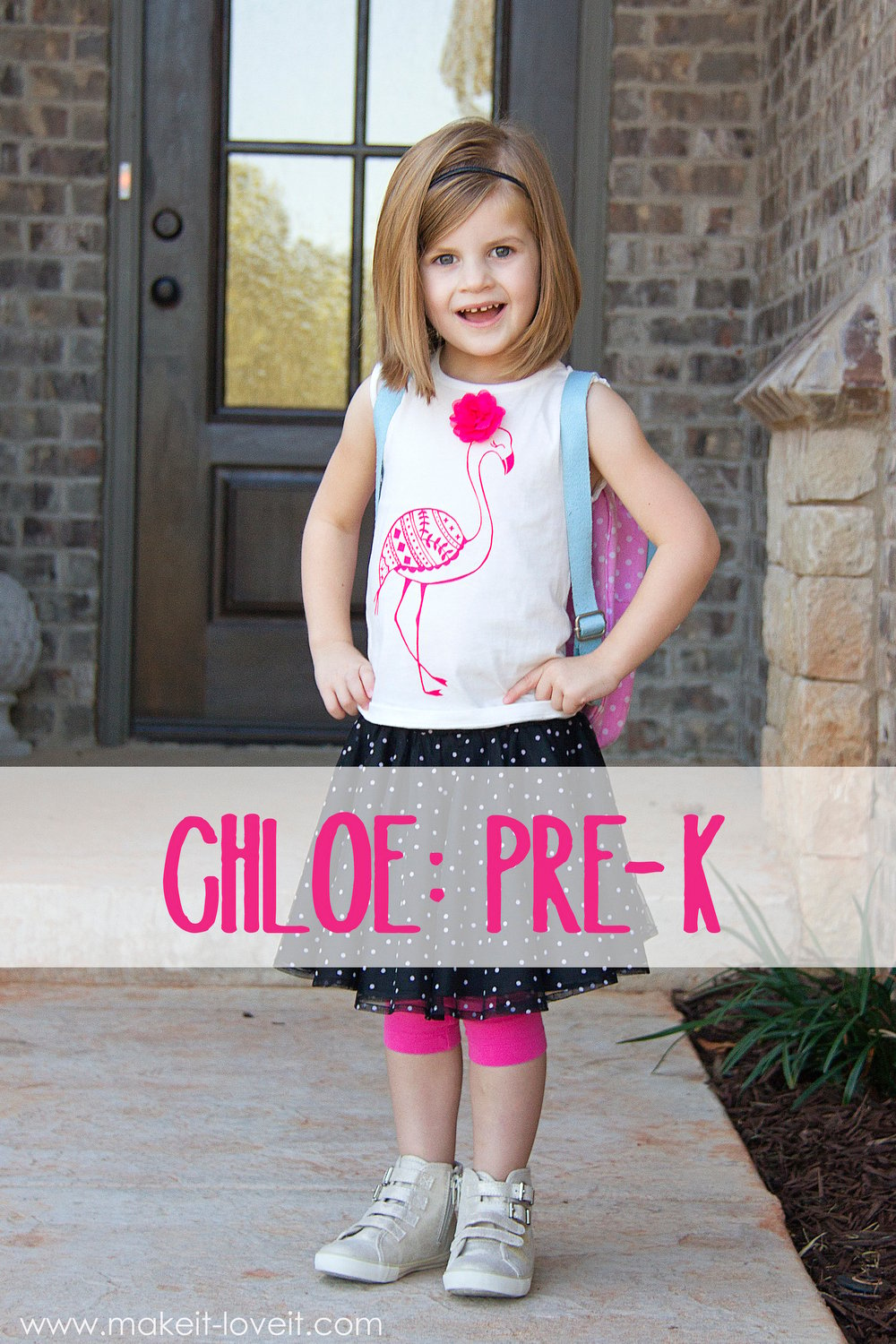 But my heart still has a hard time dropping of my little 4-year-old’s off at their very first day of pre-school.  But Chloe’s excitement made it a lot easier.  And so did watching her skip down the sidewalk way ahead of me, hanging her backpack in her cubby, and then grabbing some little girl’s hand and telling her they should go down the slide together.  I stuck around for a little while watching her on the playground and smiled as I watched her observe what the other kids were doing…….and then joined right in!  Chloe is such a fiery child (that definitely has to be reigned in at times) but she is a funny one to watch! :)  She is going to LOVE school! 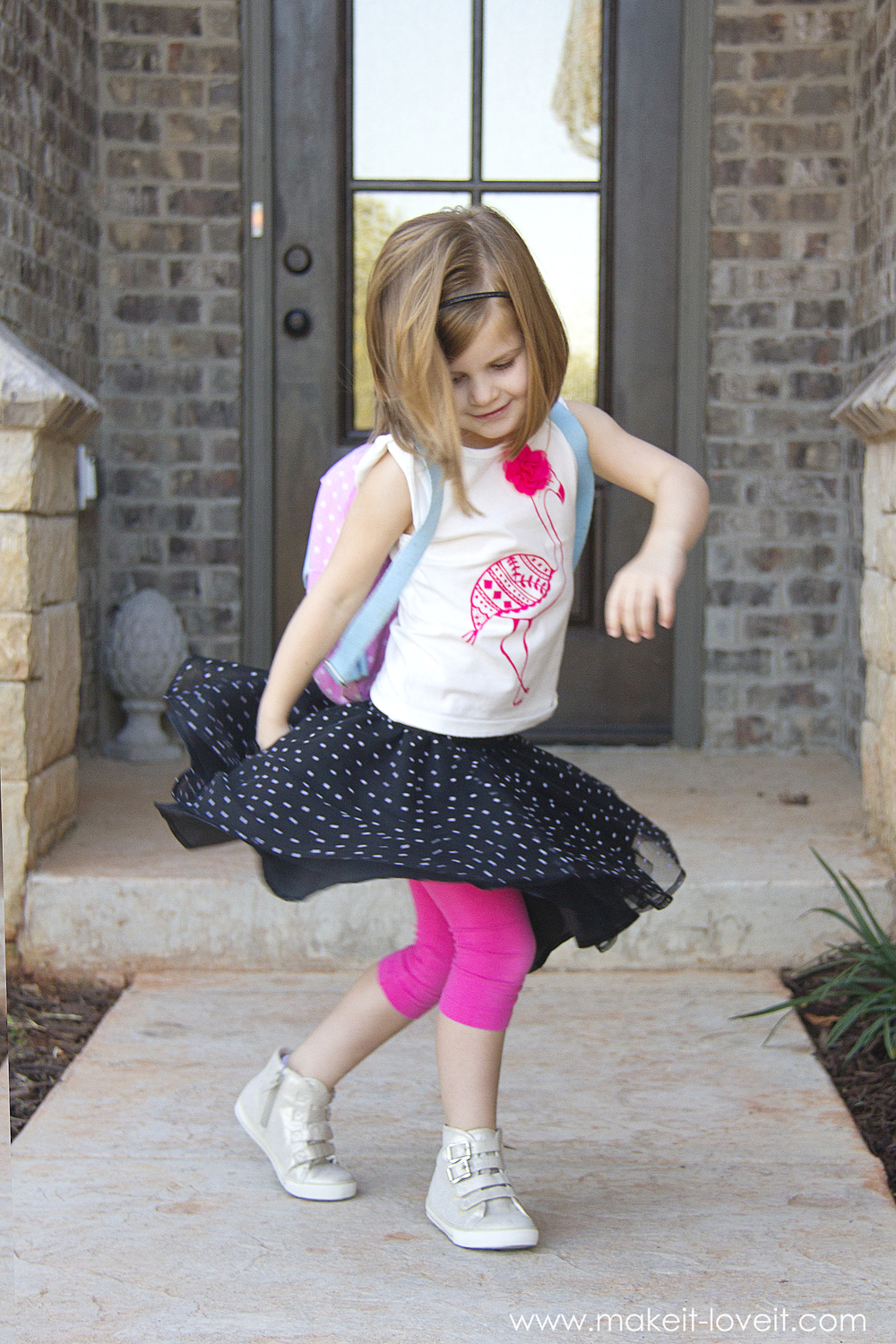 Oh Connor.  He’s starting to say and do things that are a lot “older” and he’s becoming aware of what’s going on around him.  He wants to be so big and so cool and LOVES hanging around older boys.  (Especially ones who can talk his language of star wars, mine craft, and legos.)  He even told me one day, “Hey mommy, I think I want to start calling you MOM now, okay?” I said sure, that’s fine and told him I was about the same age when I stopped calling my mom, mommy.  And he said, “Okay, well I’m going to call daddy DAD now, that’s okay too, right?”  I told him of course it was!  But then later that night, he came into my room, called me mommy and asked if I could read a book with him.  I kind of love that he forgot! ;)

After he came home from his first day yesterday, he told me, “after you walked us into school and then left, I was feeling a little nervous, and had some tears come to my eyeballs.  But then I started talking to some kids in my new class and I forgot all about you!”  Haha, oh good…..that’s perfect! 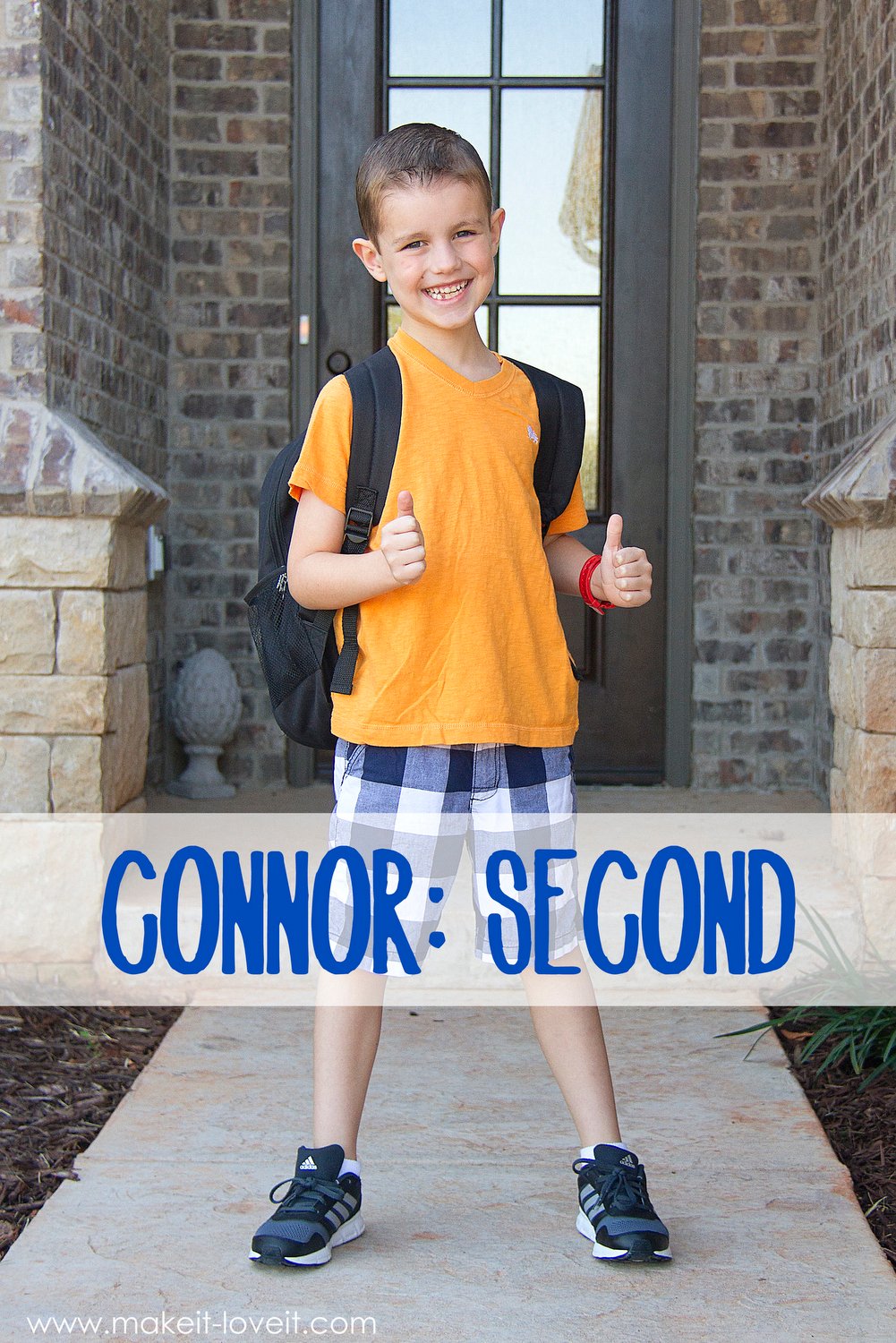 Connor became a HUGE reader over the summer and I think that gave him a lot of confidence.  He read the first Harry Potter book (Steve read it to him first and then he read it solo) and sometimes asks if we’re SURE they’re aren’t wizards somewhere in the world.  Ha!  He has been trying out new words and phrases and adores doing “big kid” stuff with his daddy.  (Remember, he tried the whole “dad” thing but still says “daddy”…haha!)  He is going to have a great year! 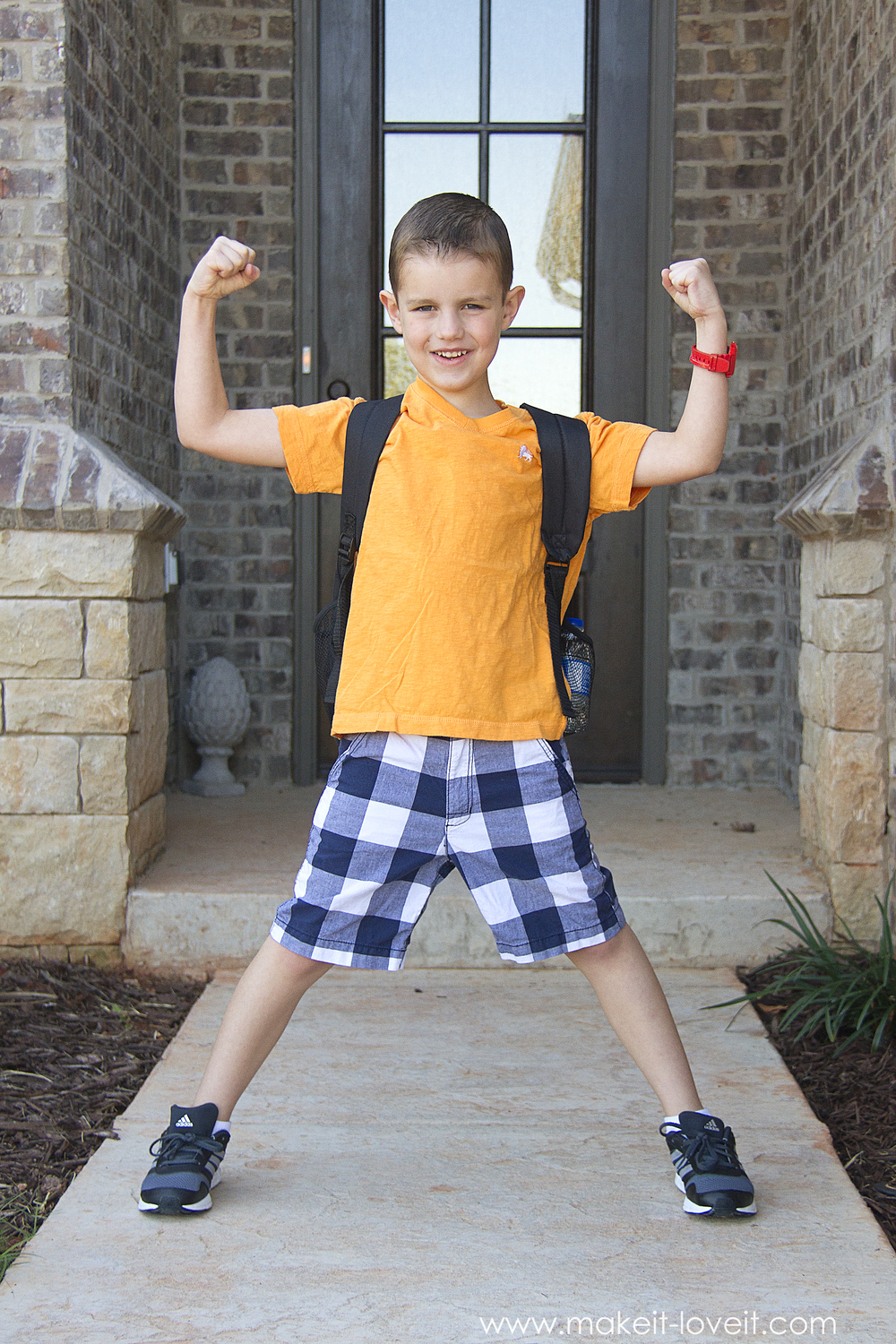 My sweet Elli.  She has such a compassionate soul.  And I love every piece of her heart. She is growing though and has been testing out her attitude and defiance…..holy smokes.  I know that this is the age for that and it has to grow gradually, otherwise I would lose my mind when it comes full force during the middle school/high school years.  (Heaven help me!)  But I really do love that she’s testing it all out.  Including the eye-rolling and the muttering under her breath. (Okay, that’s a lie. I don’t really love those 2 things, but it’s part of developing, so I get it.)  But it’s also kinda fun to watch her develop her own style.  I don’t want her to choose things just because I like them (though I do hold things up for her to see, and act really excited about them to see if she’ll choose them….haha!), so I actually am proud of her for showing confidence and choosing things that SHE likes! Even if they are purple and pink sparkly high-tops with pink leopard print stars, that twinkle on the toes when she walks. (Yep, that shoe manufacturer threw up every bit of teeny-bop they could, onto those shoes.) 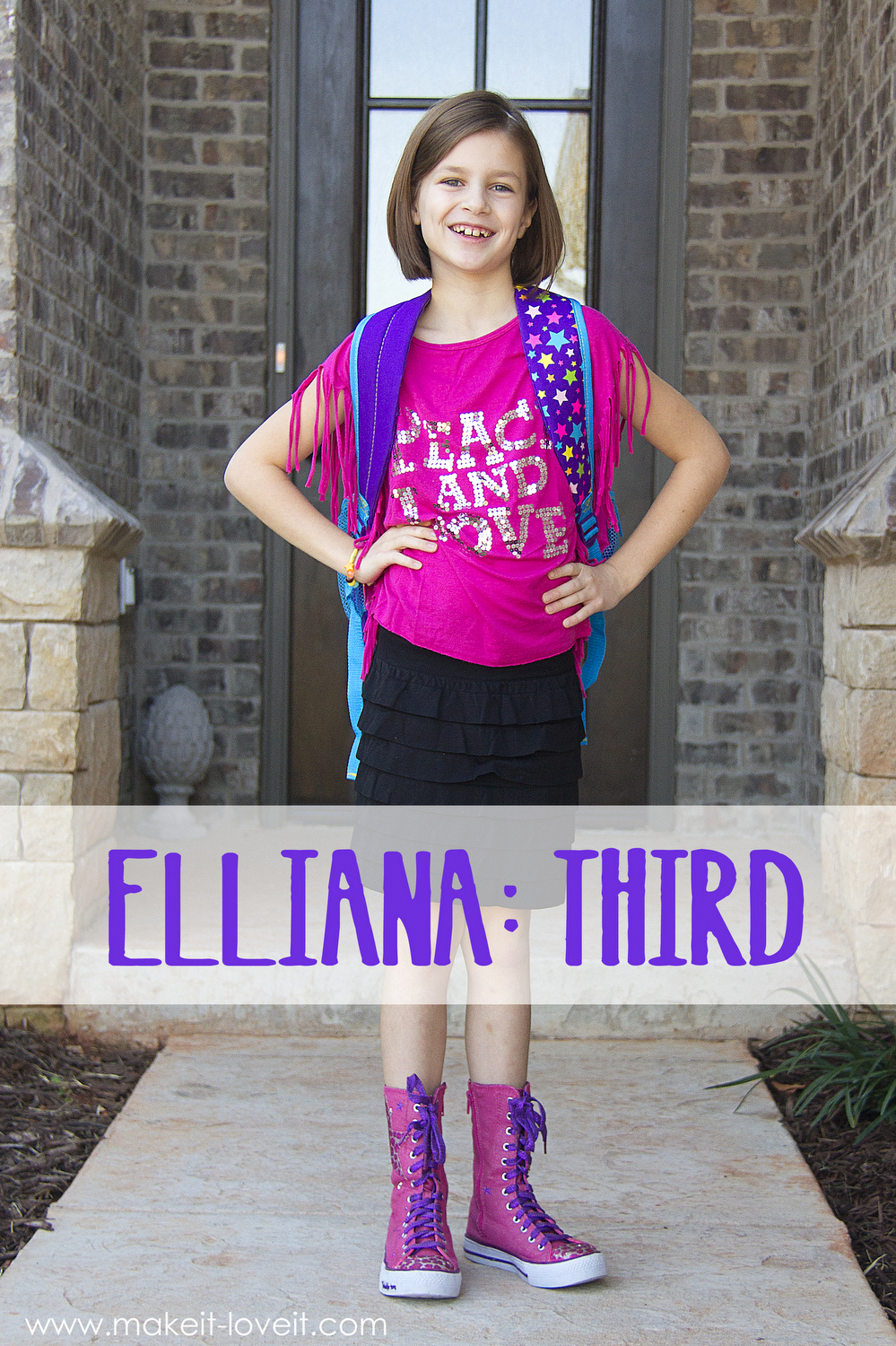 Elli has been noticing a change in the things she and her friends like, and what they talk about…..and she is starting to get embarrassed about the word, “boy”.  Oh gee.  She even told me yesterday morning after putting her new high-tops on, that she felt really old with them on, like a teenager.  (I almost ripped those shoes right off her feet!)

This girl is thirsty for knowledge……and I know she’ll have a great year too! 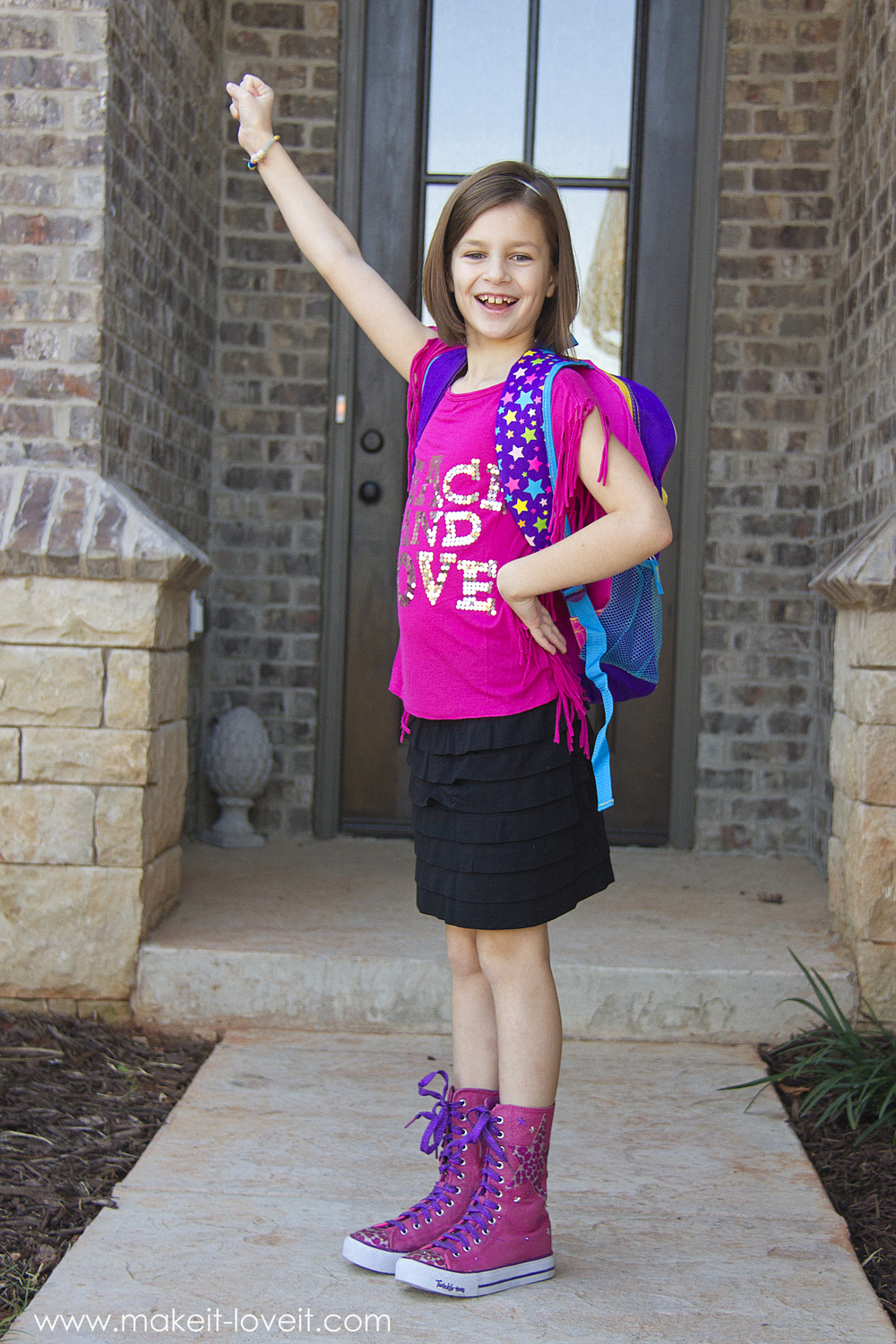 These kids.  Man, they can be stinkers, each in their own little way.  But I dropped them off on their first day of school with the normal teary eyes and blurred vision….knowing how much of my heart they carry with them.  They really are my little world.  (Plus baby Oliver…..but he didn’t make it into the pictures.)  Please be kind new teachers, new classmates, and new school.  And you 3 better use your manners, raise your hands, and please oh please go and find the lonely child on the playground and play with them! 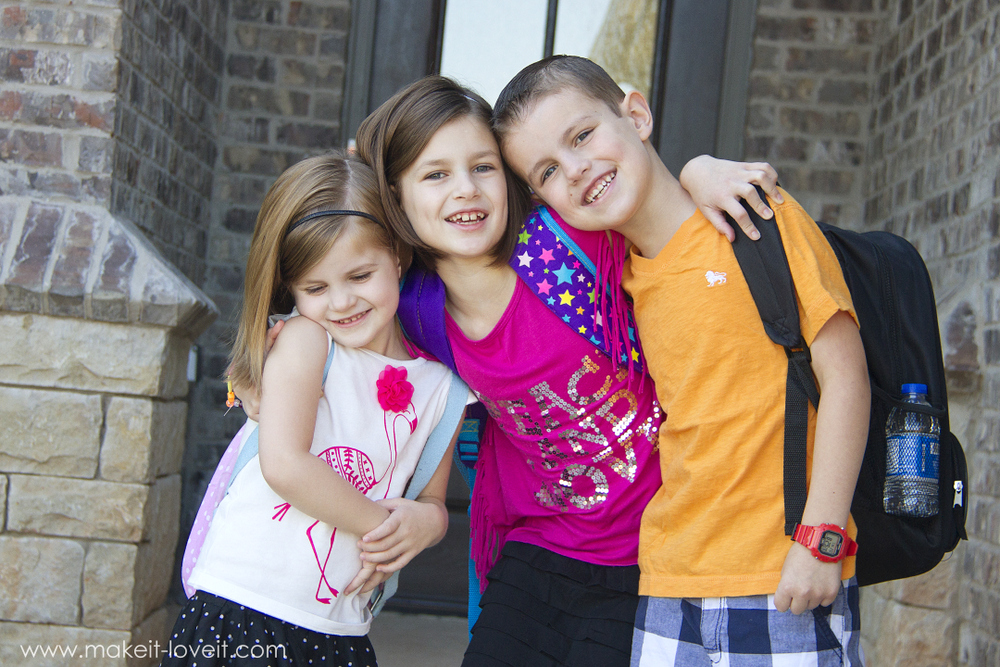 Are any of you sending kids off to school (or already have)?  Does it always make you sit and think about how much they have grown? And who’ll they’ll become? And how you’re doing as a parent? My emotions are tired.  But I’m happy to have a schedule back.  And an uninterrupted afternoon (because Oliver is napping and Chloe is in afternoon Pre-K).

Happy “Back to School” friends!

Ashley Johnston is a professional DIY costume maker, sewist, crafter, and owner of Make It & Love It. She is a mom of 5 and a wife to a very patient (with my craft clutter) husband. In case you’re wondering, she always chooses crafting/sewing/designing over mopping/dusting/wiping base boards……but bathrooms/laundry/full bellies are always attended to. Whew!
Author Bio Box by HOI
Author:
Ashley Johnston
Categories:
Mentions:
Not Specified
Keywords:
Not Specified
Last Updated:
August 21, 2015 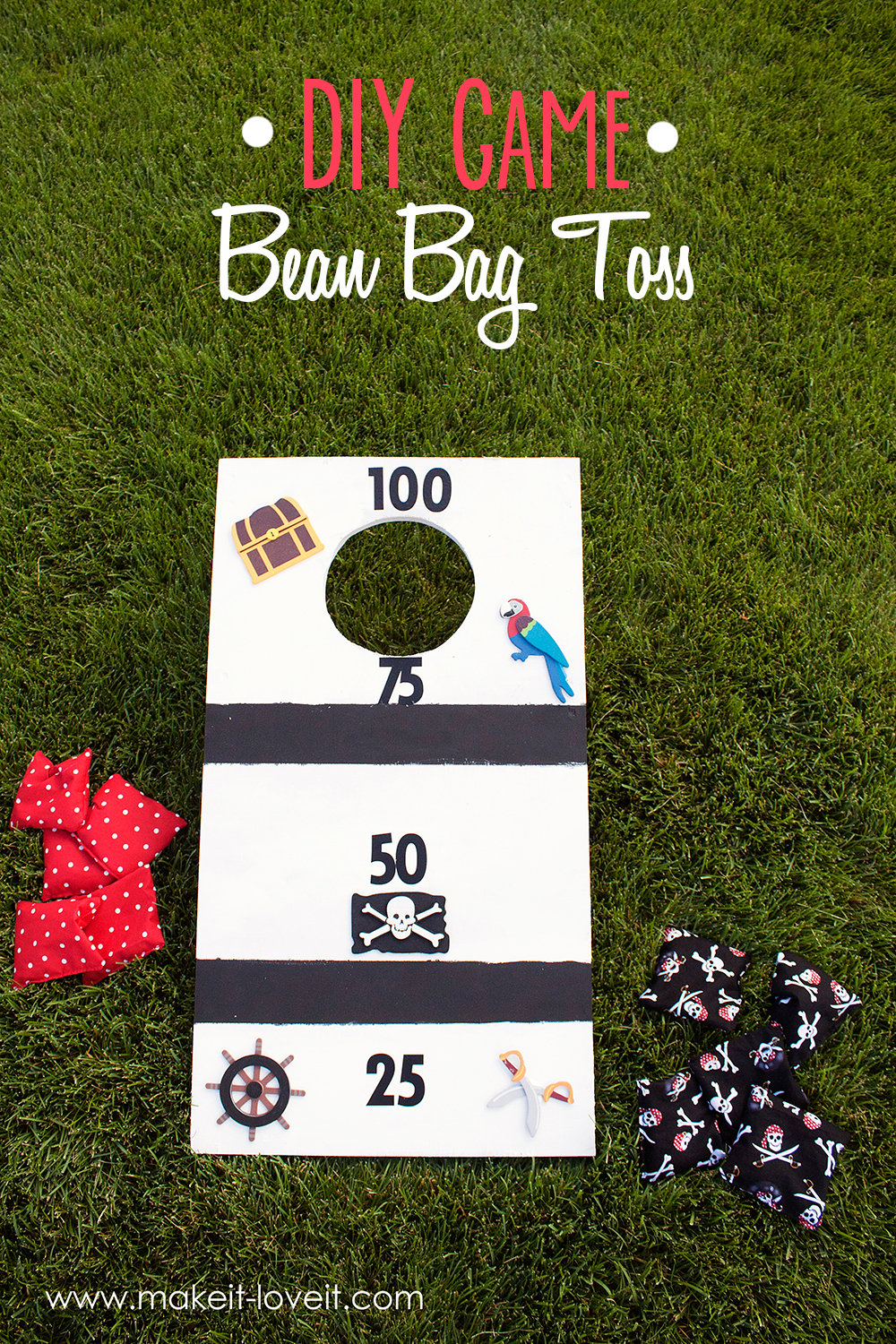 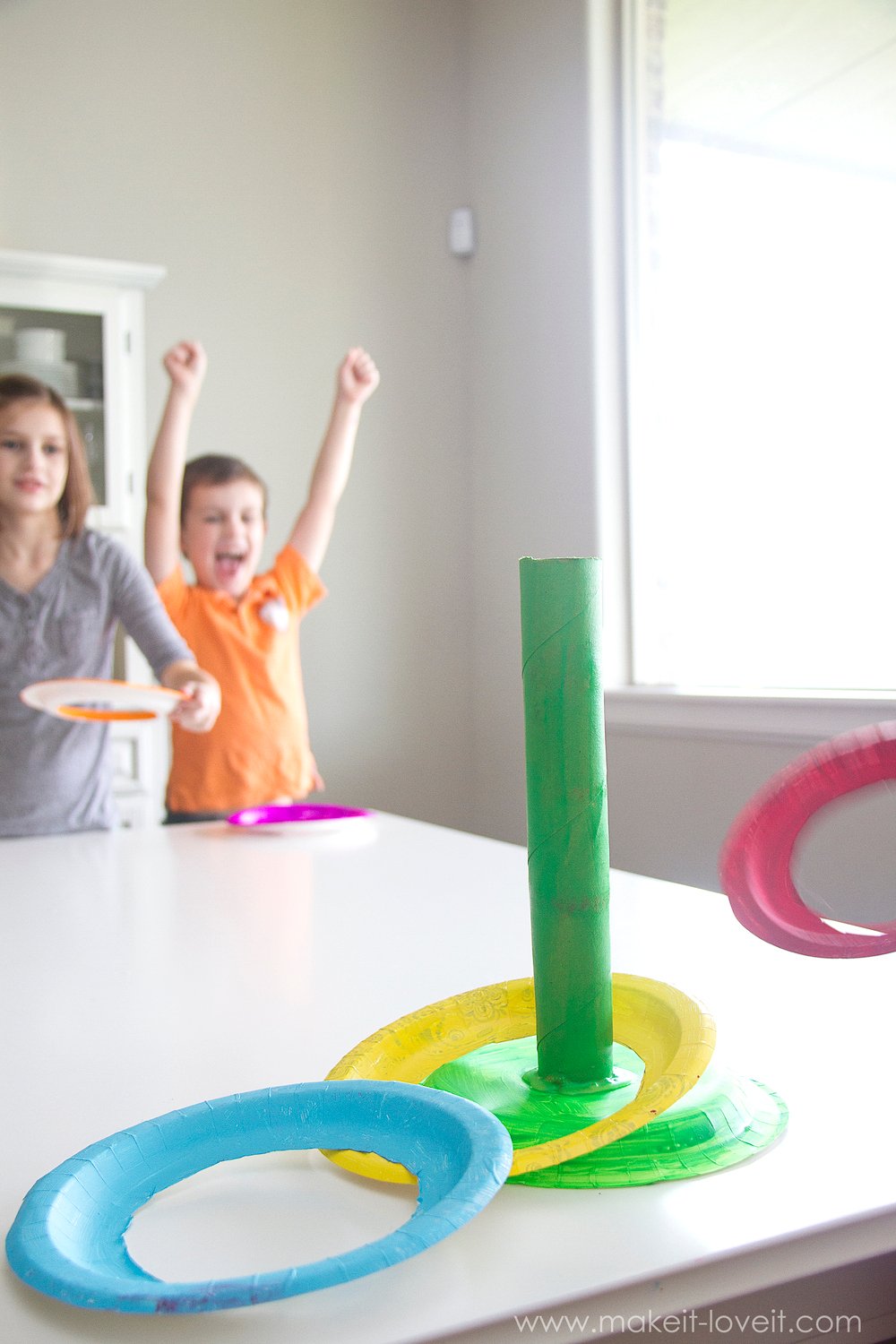 Next Post:
Taking shortcuts, being present, and a “Ring Toss Game”