Connor was born a snuggler.  He has been our only baby to put his little head down on our shoulder and cuddle right in.  He would let us hold him for hours.  The girls, however, liked to be facing outward and wanted to see the world.  But Connor was always content sitting right on our lap, watching the world from our arms.  And you know, this kid is still somewhat the same……but at the same time, he’s also the most adventurous out of the 3 kids.  But, give him a quiet moment and he still loves to be nearby, loves to sit in our laps, hold our hands, and snuggle his little body right next to ours.  He is such a warm and friendly little bugger……but also loves fun!  In any form. :)

About a month ago, I realized it was his 6th birthday, and that he could invite friends over.  (We don’t have the kids invite friends over for every birthday.  Every few years they can, but the off years, we have a more cozy family birthday.  We still spoil the bananas out of them…..but it’s just us.  The “friend birthdays” require a little more time, effort, money…..and well, let’s be honest, they’re more exhausting!  Plus, it’s how Steve and I grew up…..so it feels normal.)

But once Connor remembered it was “friend birthday” year — he was PUMPED! 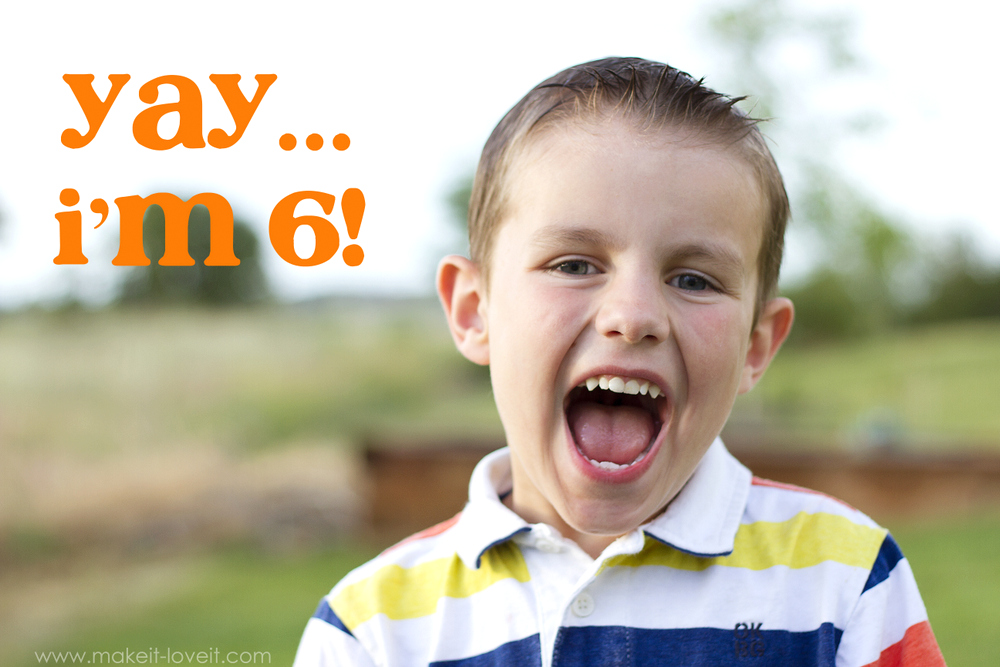 And then I panicked a little.  Because this brain of mine thinks that my body can do everything like it normally does…..and I have been cramming items on my “to-do list”, just like normal.  However, my pregnant body reminds my body that the “list” is ridiculous.  But, a certain little 6 year old needed a “friend birthday”.  So I knew I needed to throw some REALLY SIMPLE THINGS together — STAT!

Anyway, Connor told me he wanted a Lego Batman party.  So, I went with it.  And scurried around the internet to find a Lego head image and a batman mask image.  I put them together in photoshop, slapped a time/date on there, and printed them out. 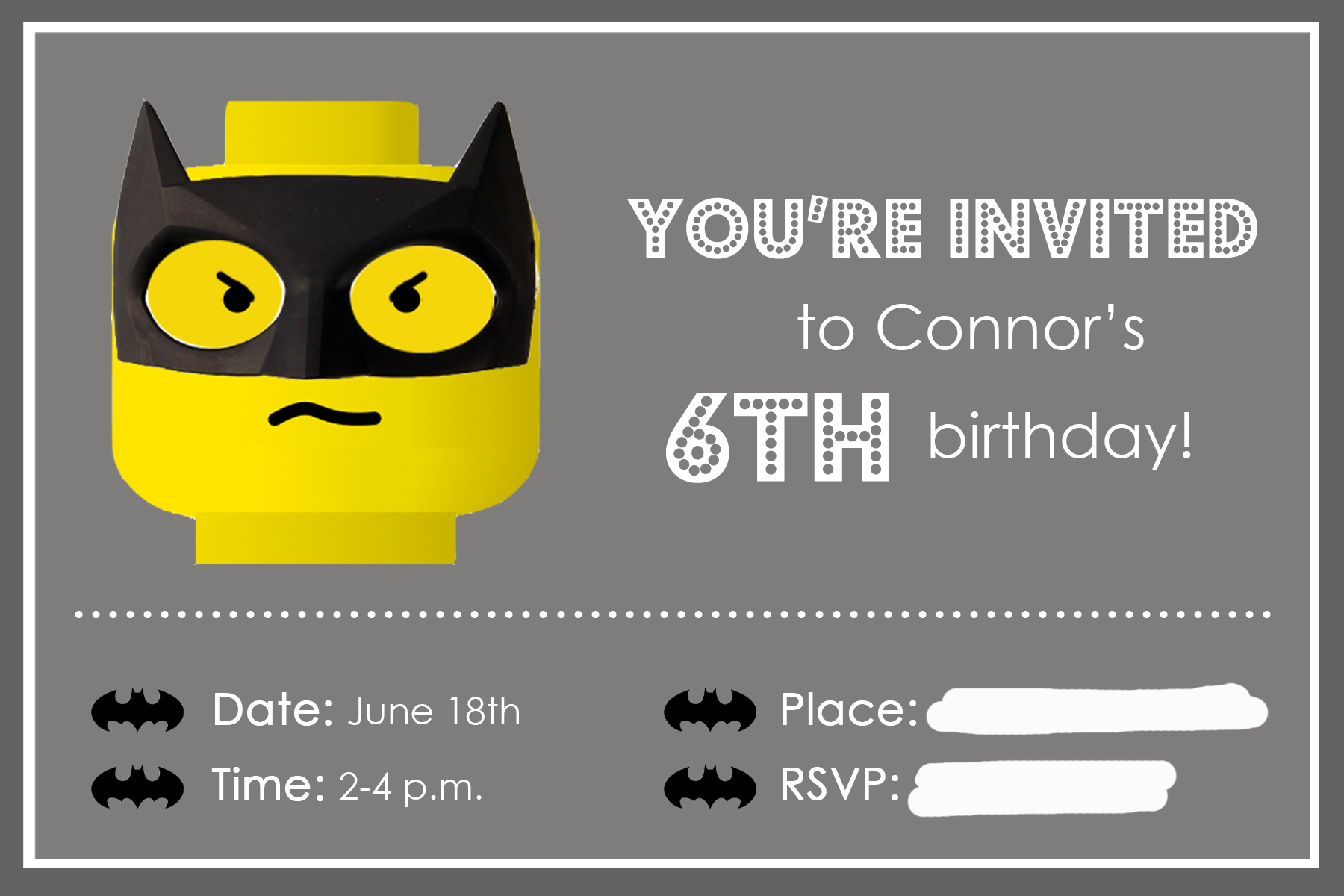 Once Connor saw them, he said, “hmmm…..that must be a Lego Robber, because Lego Batman has a black head, not yellow.”  Ooops, who knew?  Obviously not me.  Ack!!  Oh well, just go with it kid! :)

So, we put up a few birthday banners, tassles, streamers, and balloons…..and waited for guests to arrive.

Once his friends were here, I passed out some masks and had them decorate with sticky foam pieces.  Nice and simple. 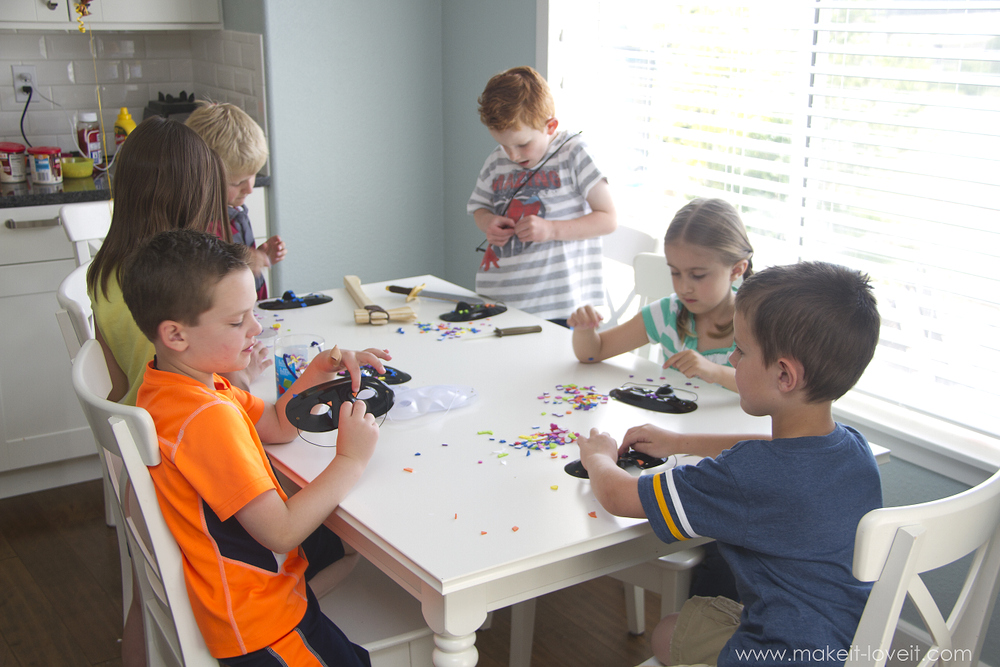 I made everyone a felt cape ahead of time and they put on their gear. (Oh, and felt means there are no seams needed and I just hot glued the felt symbols on the back.  I did, however, sew velcro to the neck closure.  But really, these were super fast to make.)  The capes and masks were a HIT!  These little monkeys ran around the house, with their little capes flapping behind them, doing what little boy/girl super heroes do best……and created chaos.  But it was fun to watch.  And gave them a chance to just play.  Totally worth every ounce of effort! 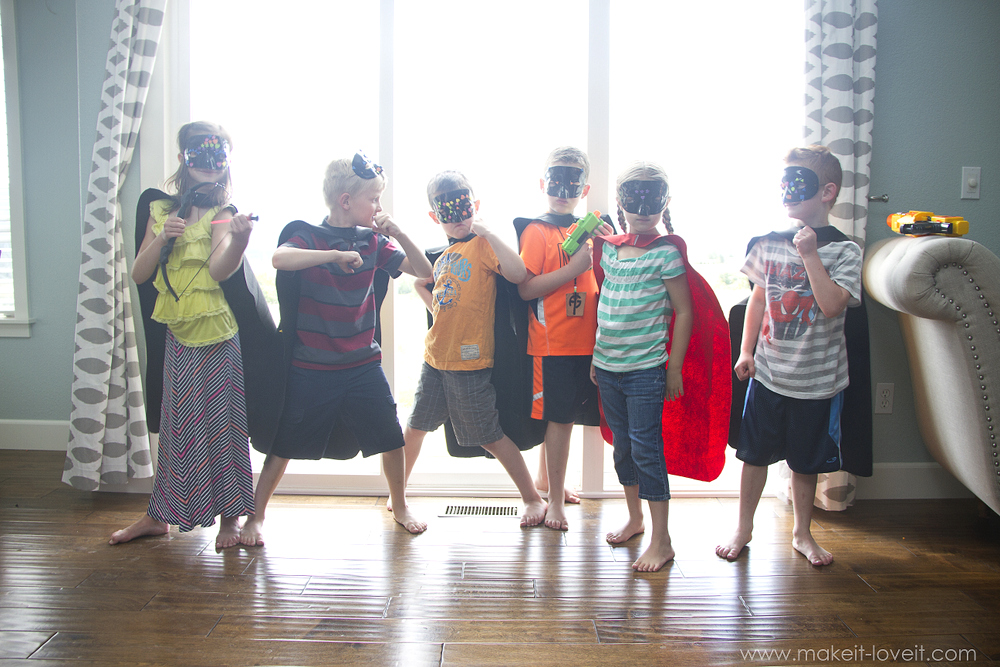 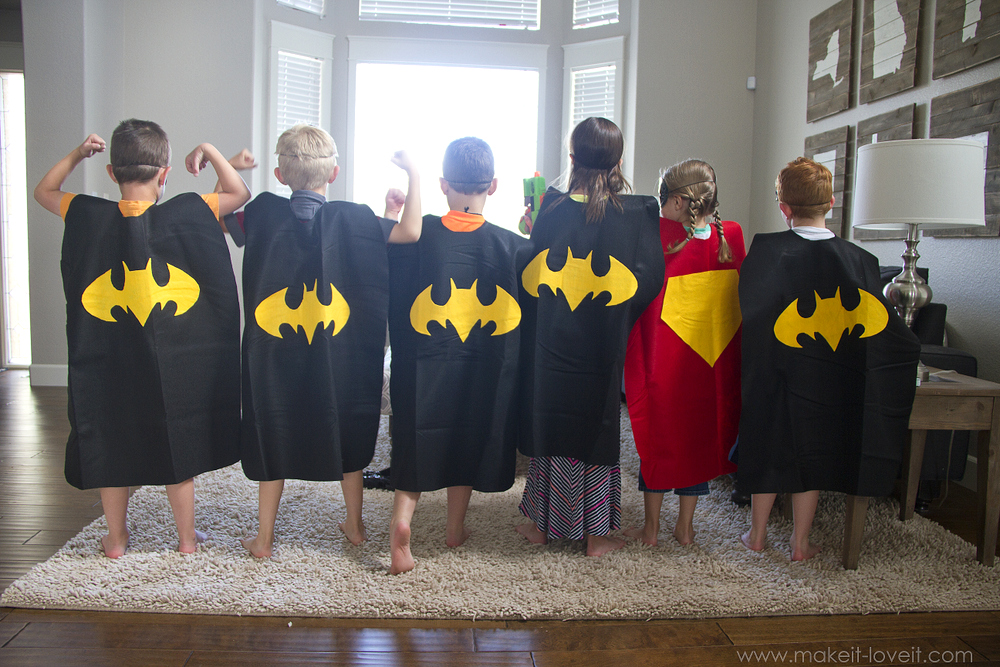 Then, we headed outside and let them try out the Water Blob.  I have seen so many examples of the Water Blob online……I knew we needed to give it a try for Connor’s birthday.  And ha, it was hilarious!  These kids jumped and played and rolled around on this thing.  It was hilarious! 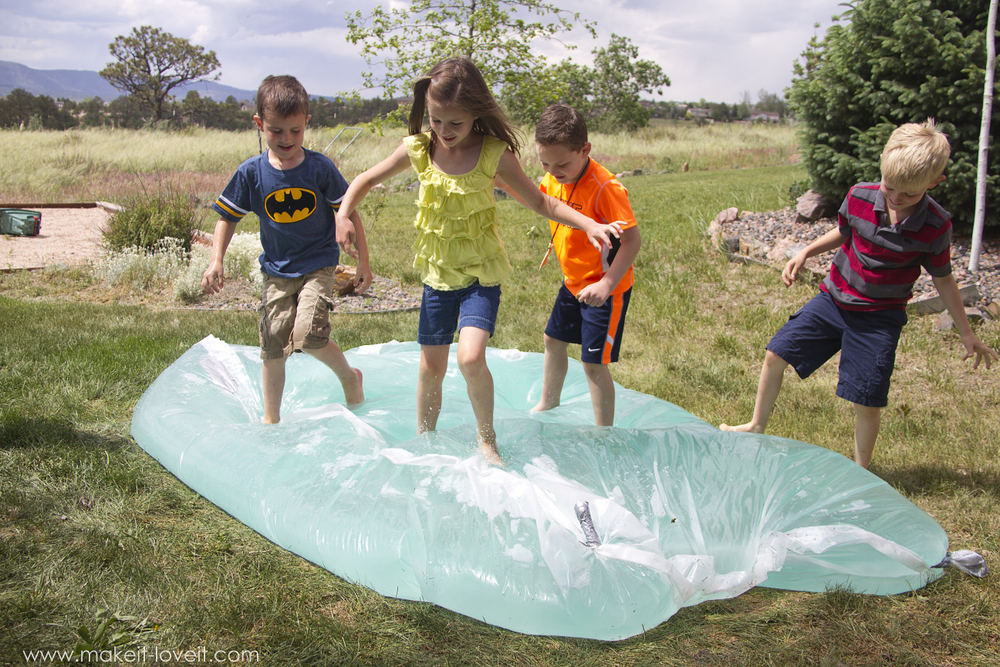 All this thing is, is some painters plastic folded in half and then all of the edges sealed together with a hot iron, to create a bladder.  You leave a small hole along one edge, fill it up with water, add some food coloring, and then duct tape the opening closed.  (If you want more info/pictures, try googling it…..there are tons of people who have made them online.)  Ours was on a slight hill, so it didn’t stay completely flat…..but these kids had A BLAST on it.  So fun! 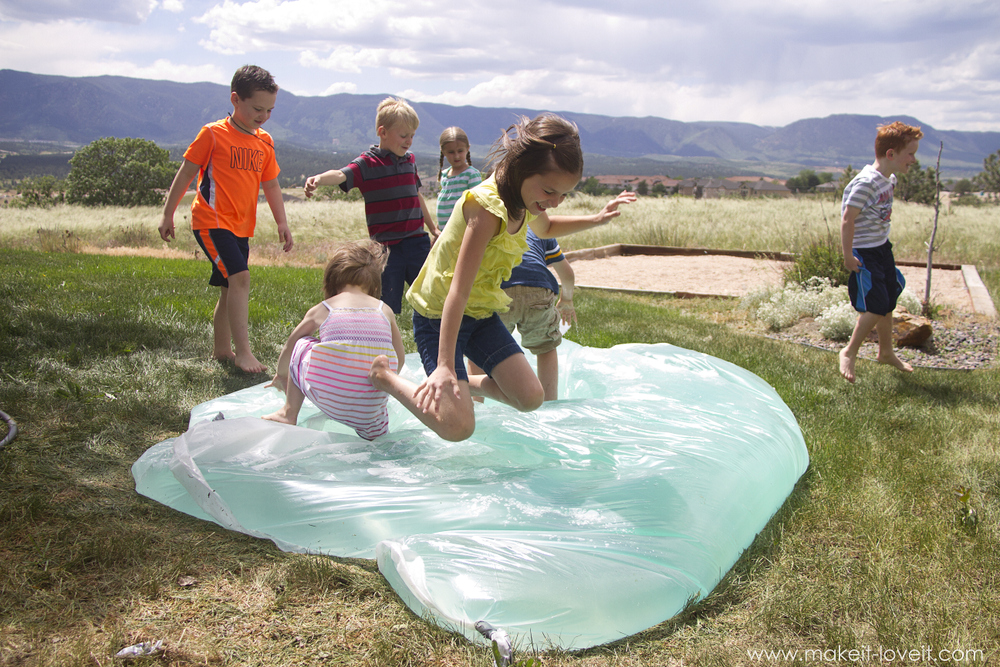 After the Water Blob, we headed inside and we did something that we did for Elli’s 6-yr-old “friend birthday” party.  But instead of creating the “Grossest Cupcake Ever”, we had Connor and his friends create the “Grossest Cookie Ever”.  And you know, there’s something about doing something out of the “norm” that is so funny to kids.  They thought it was crazy that I set out frosting for their cookies but then the only toppings were ketchup, mustard, corn kernels, sunflower seeds, and cheerios. 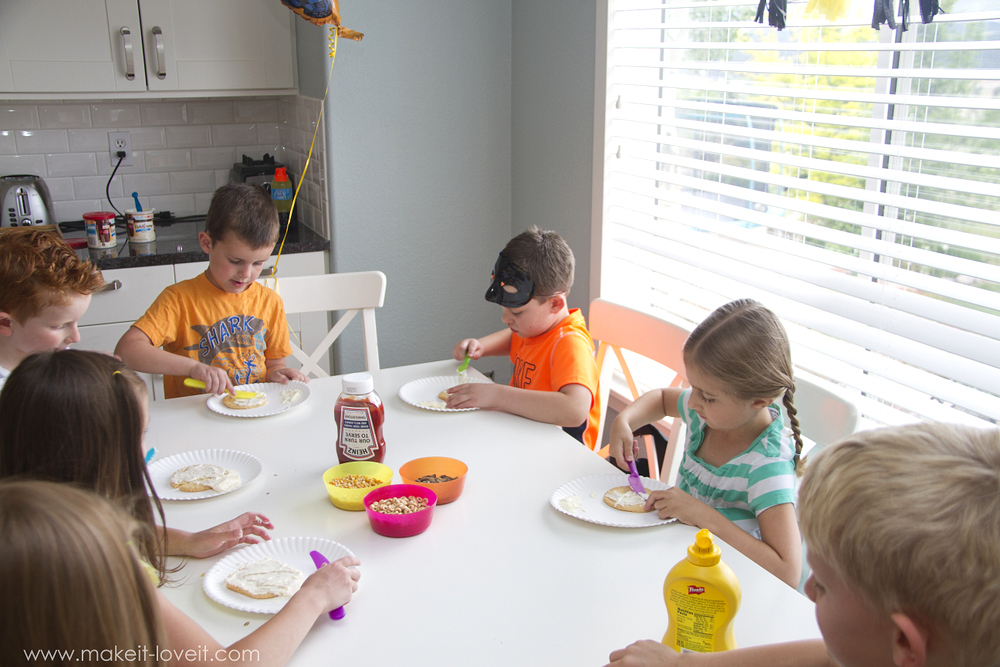 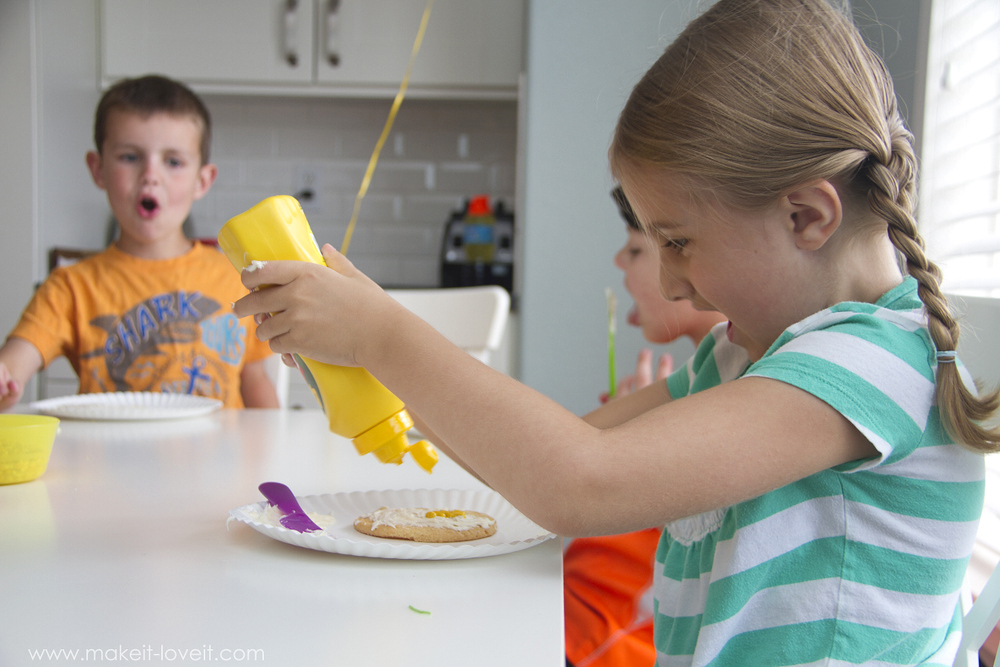 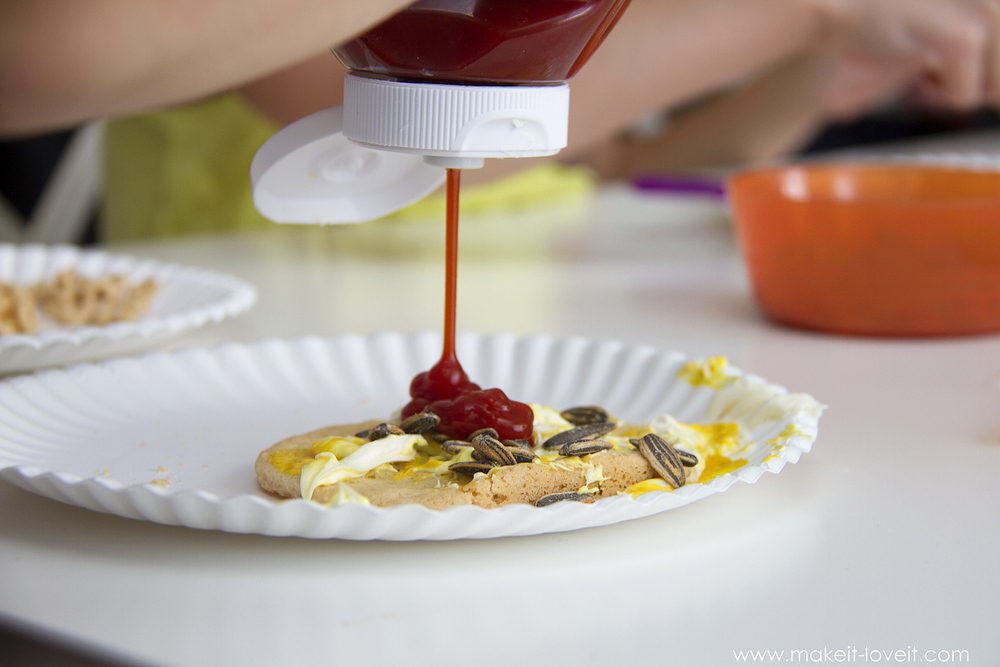 And yeah, it may seem as if a little bit of food was wasted, but I considered these “art project” items.  And just like paint, glitter, and foam cutouts eventually make it to the garbage, so did these cookies. 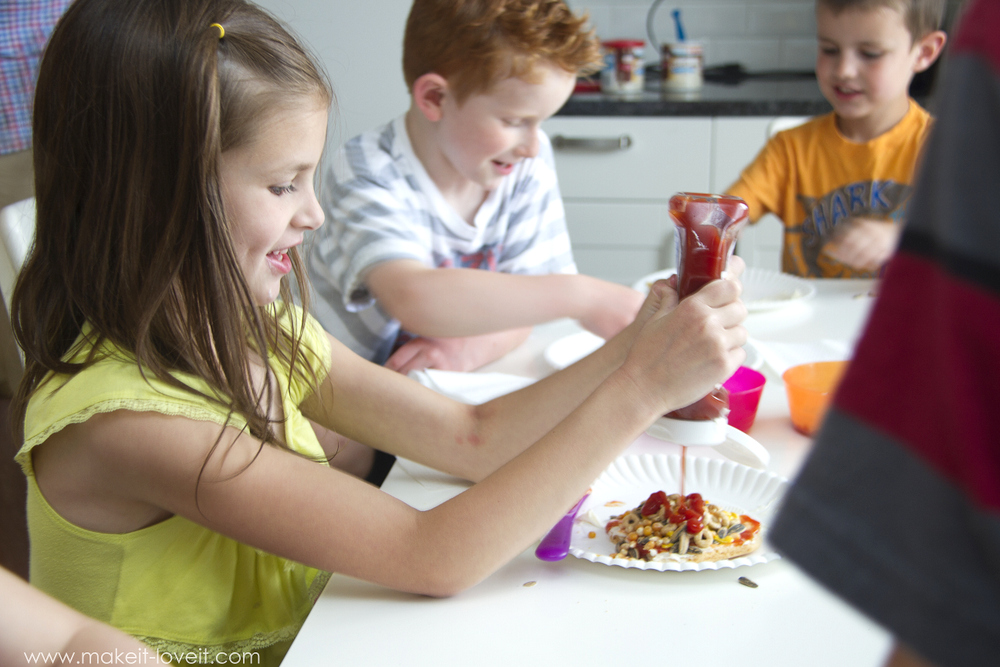 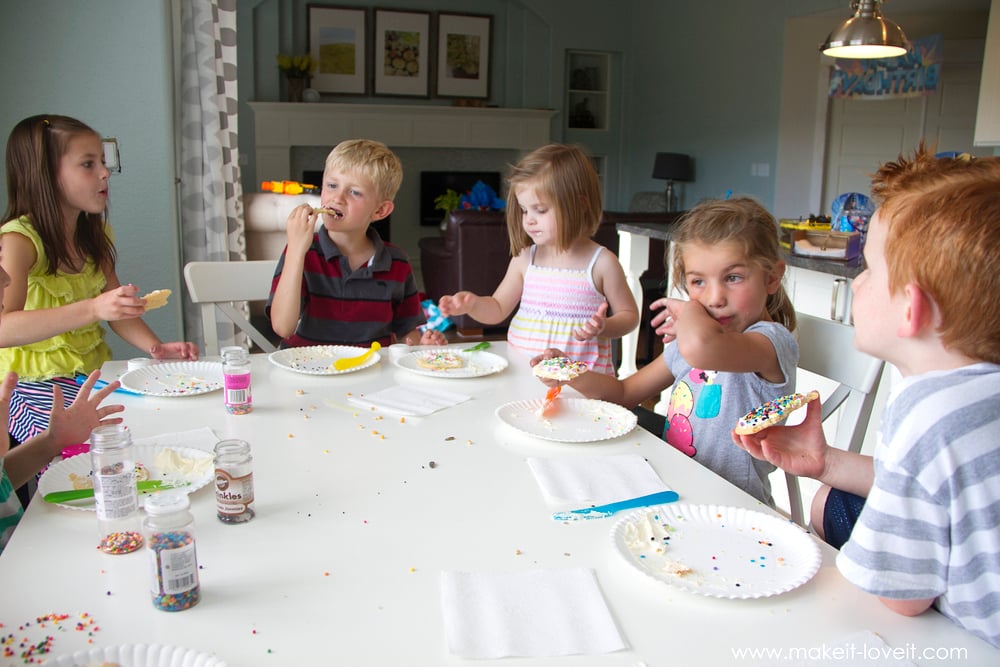 And eat them too! 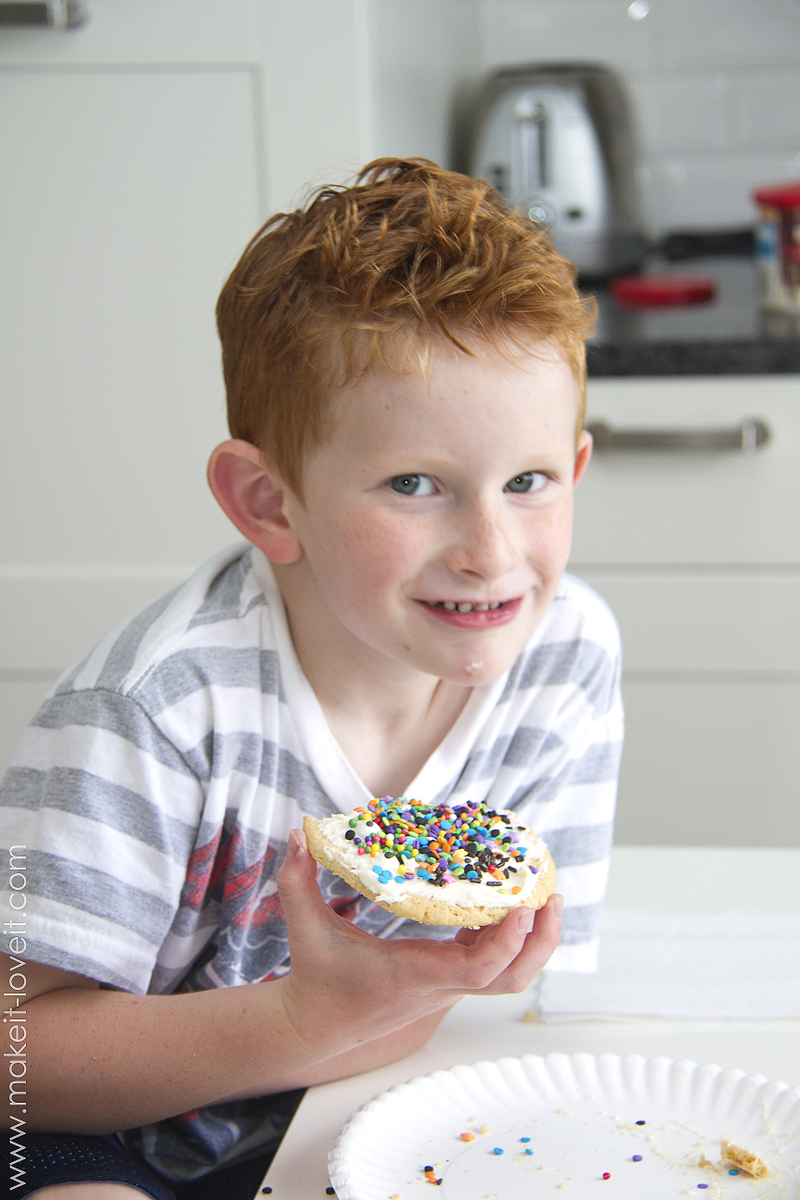 Then, back outside for Connor’s highly anticipated—PINATA!!!! 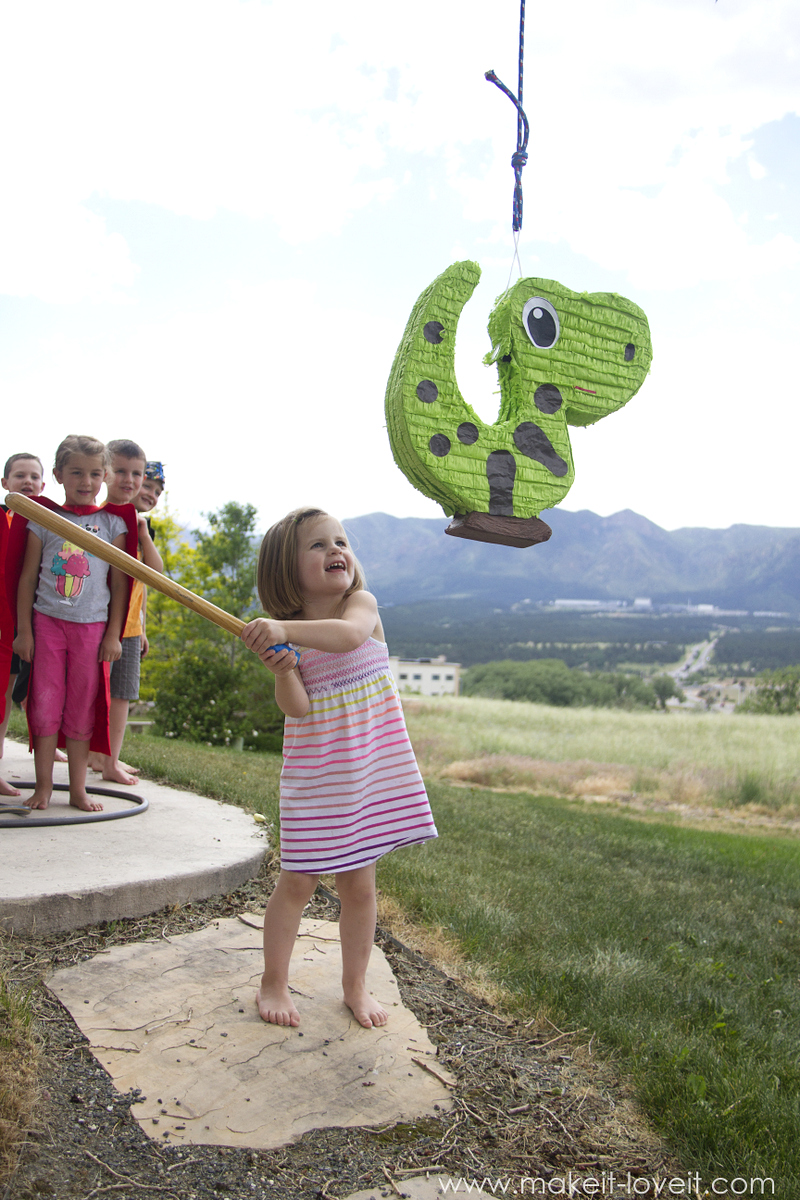 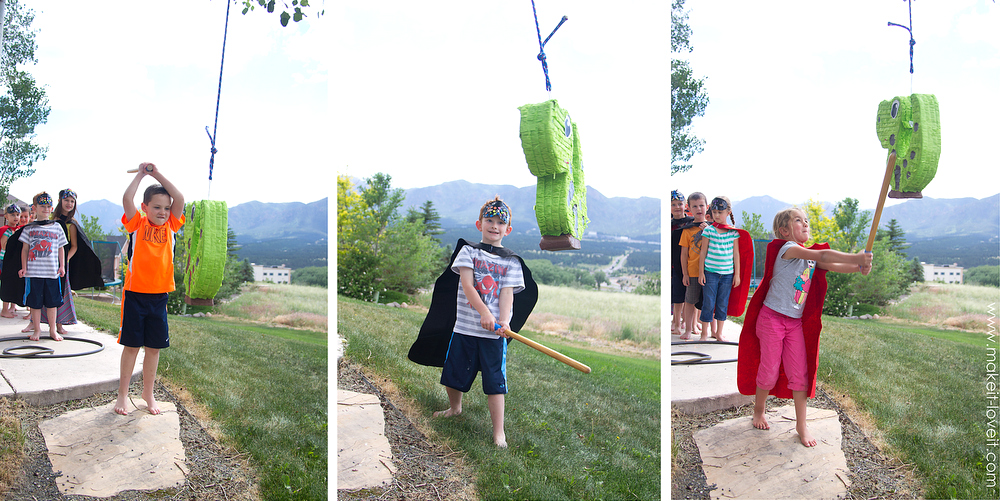 And finally, I can’t remember who actually busted it first……but it finally spilled its goods. 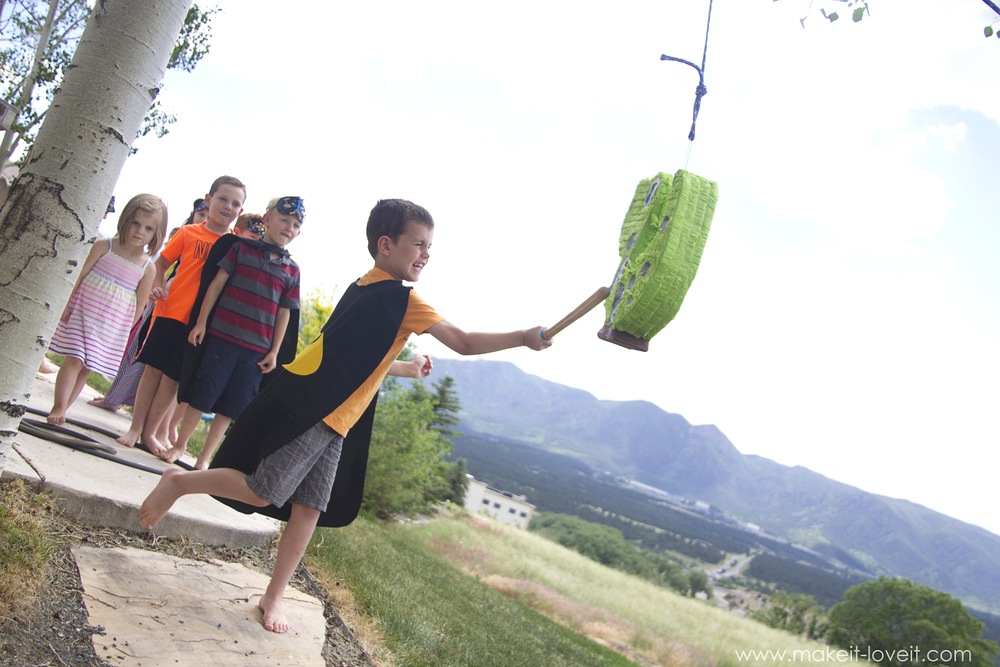 But Connor was more interested in whacking the junk out of that poor piece of decorated cardboard. 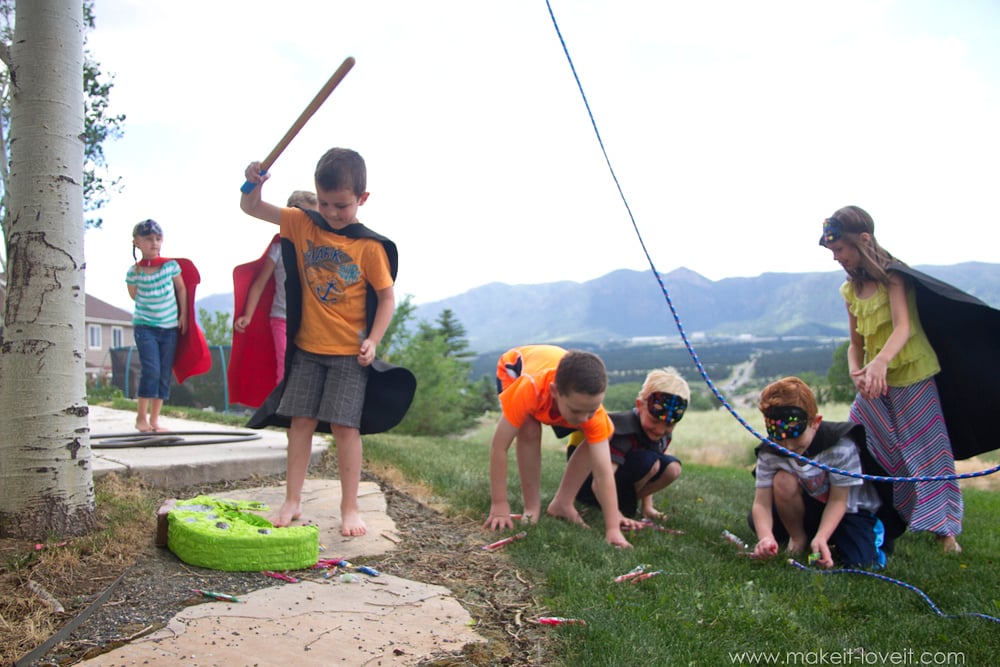 So, Steve helped put an end to that, and then sprinkled the rest of the candy on the ground for these kiddos to scrounge up. 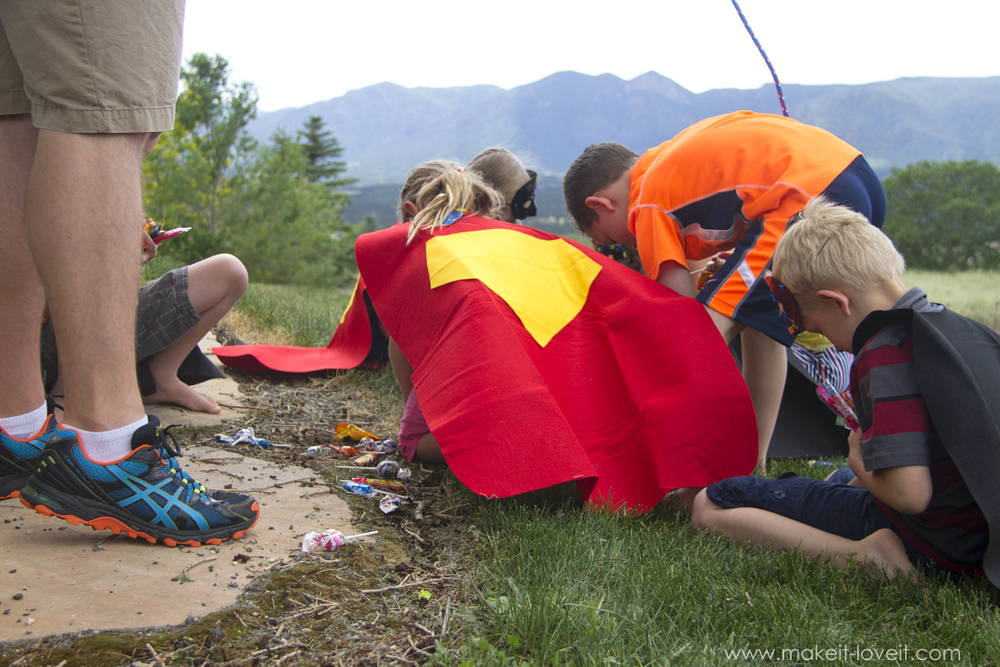 After that…..time for the reveal of the Simplest Cake Ever!!!!  He requested chocolate cake and yellow frosting.  Then, we just bought some Lego Super Heroes and stuck them right on top.  He was THRILLED! 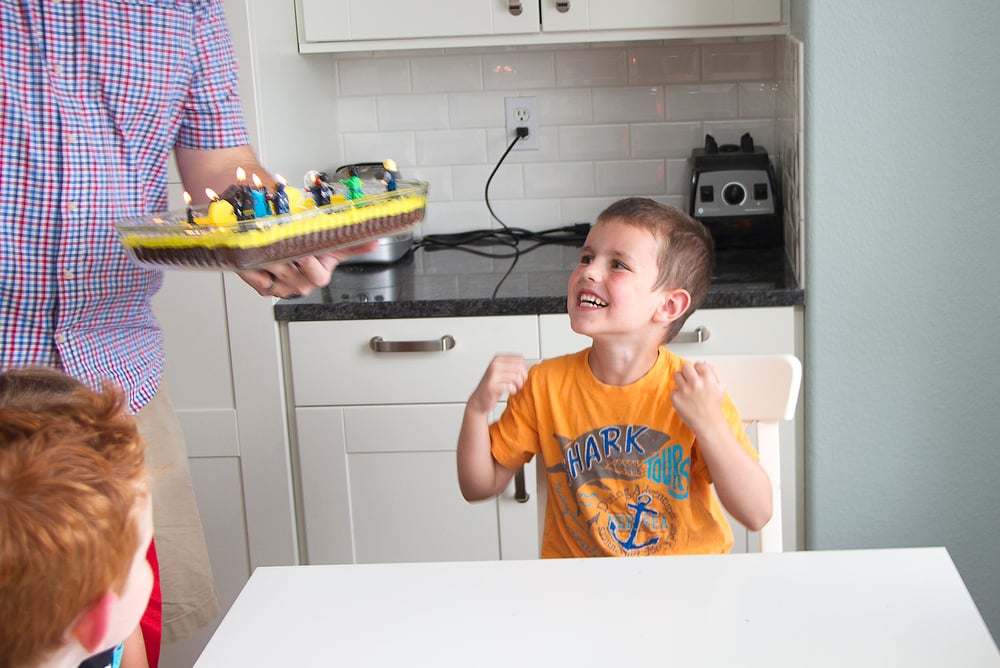 Nothing special…..but for a 6 year old, something fancy wouldn’t have been as cool as having all of those little Lego guys to play with after the cake was cut.  Whew…..I escaped that one! 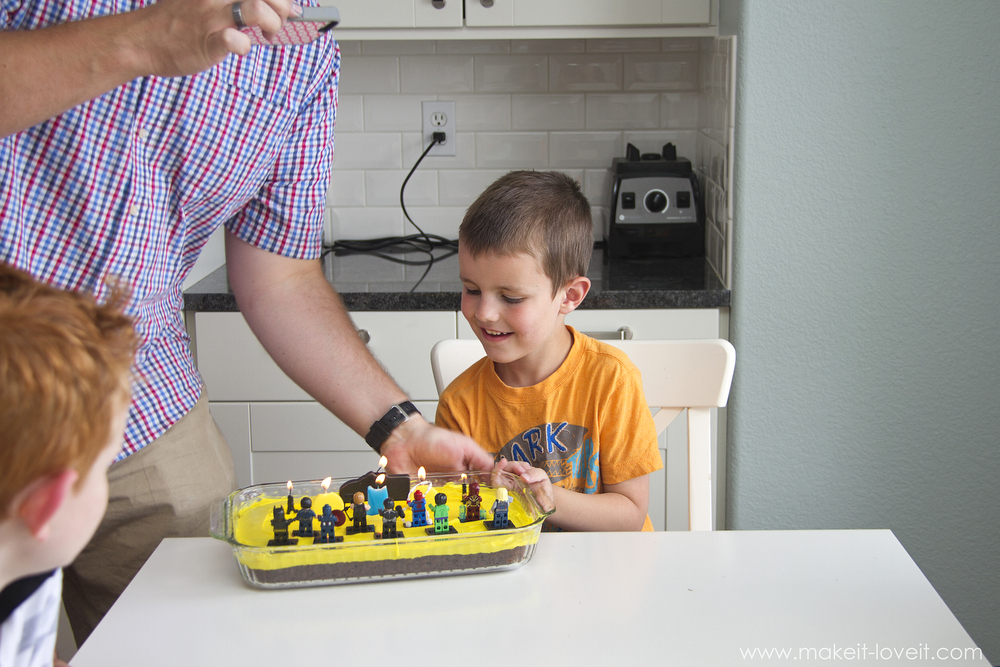 Then, time for presents.  And of course, every card, gift bag, piece of ribbon, and of course the gifts……..were SO COOL!! 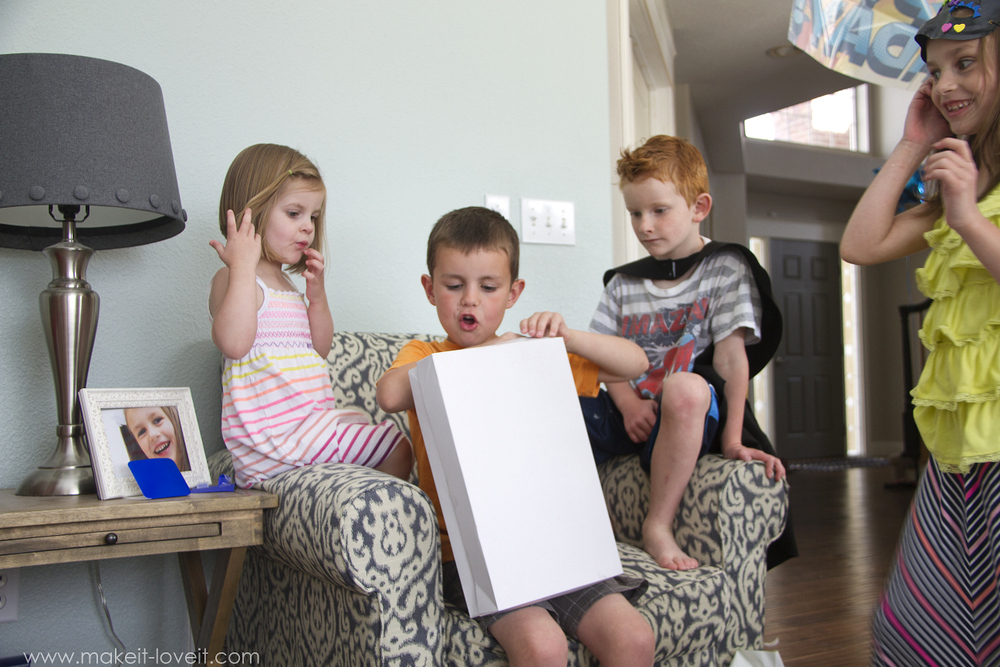 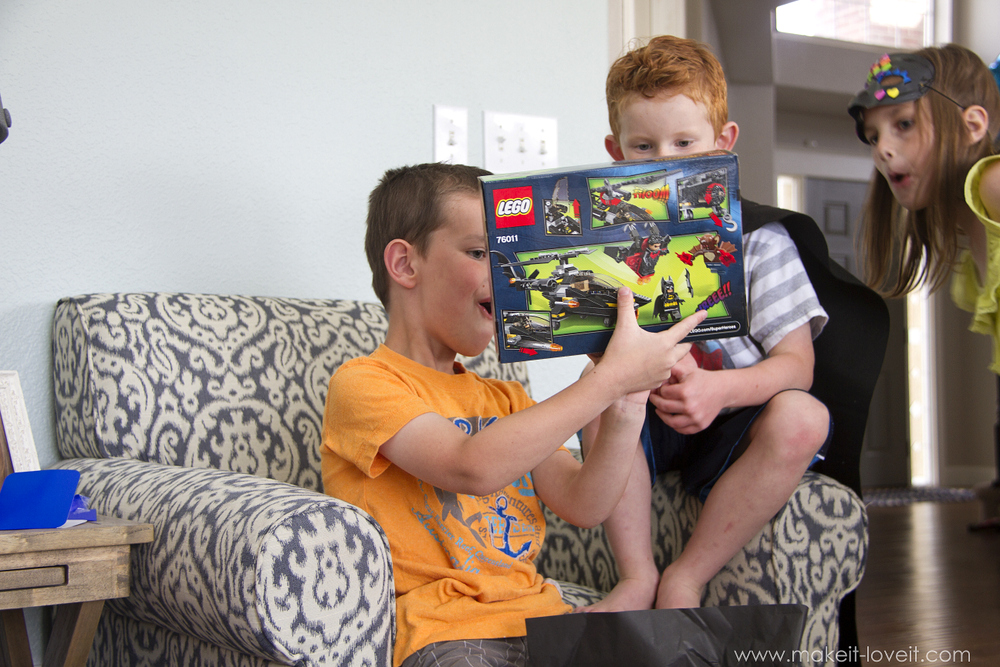 One of his very favorite gifts……was from his big sister Elli.  She gave him one and a half packs of his very own gum.  And the half pack was only a half…..because, well, she had already eaten some out of it.  Ha!  But he was SO EXCITED! 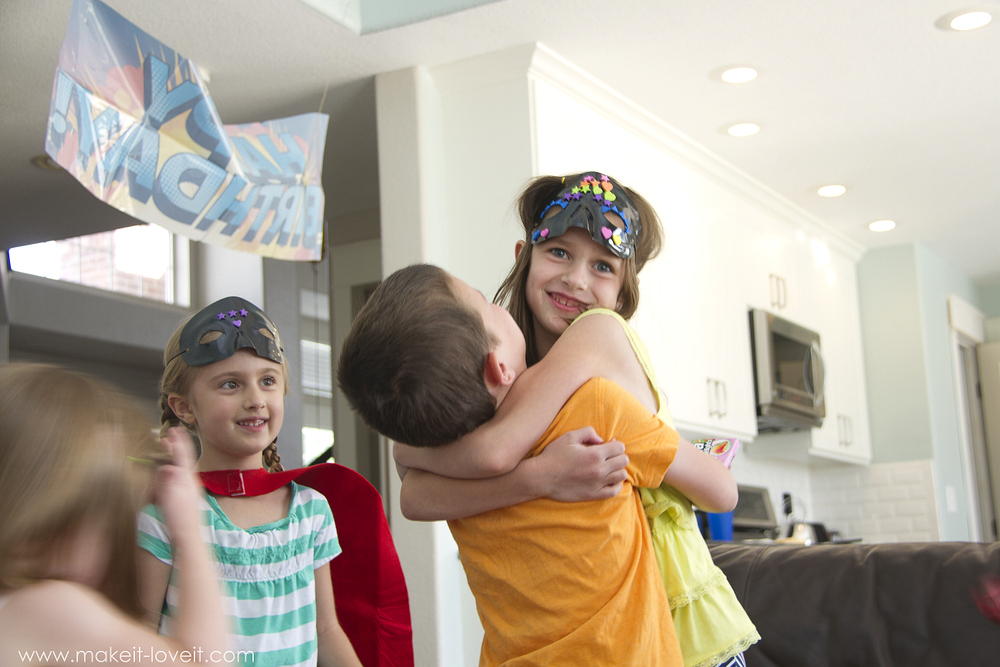 Overall, such a fun day.  This kid got to run around and play with some of his buddies, eat treats, run around in a cape, and open gifts.  Nothing better.

I just can’t believe that my snuggly little guy is already 6.  I just hope he’ll always find time to sit down and hang out with me, let me read him books, ask for some extra “mommy-son” time, ask for just “one more song” before bed, and wake up early to come hop into bed with me — just because.  This kid is a gift.  So happy he’s around! 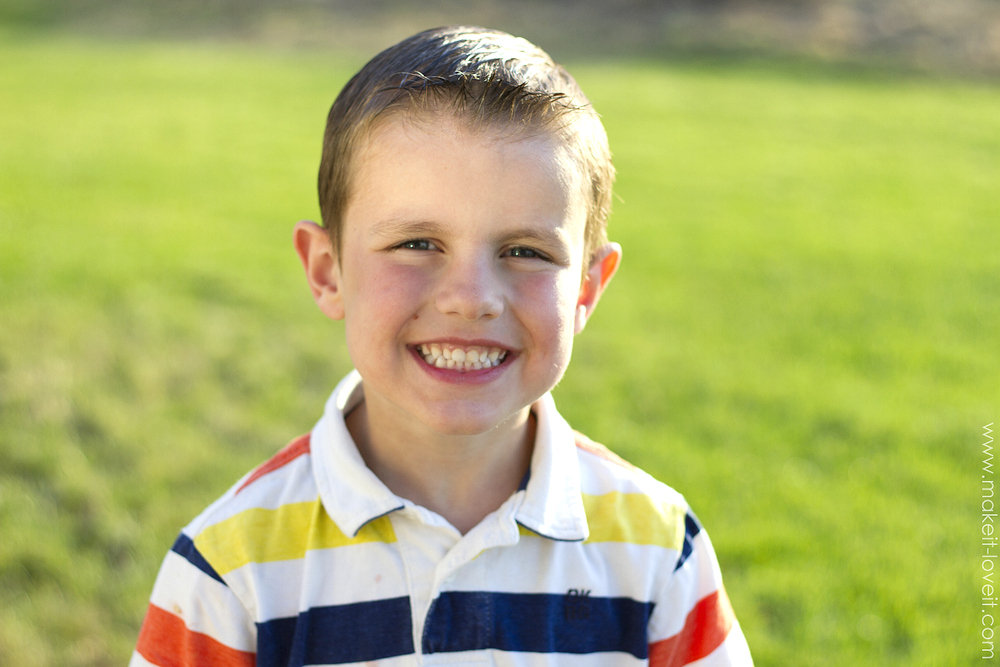 And I totally forgot to take pictures of them, but I made Lego Bag Party Bags for all who came.  And Lego crayons, Lego coloring books, and threw in some other batman type stuff.  If interested, some of the ideas I used, are on my Little Boy Party Pinterest Board.

Ashley Johnston is a professional DIY costume maker, sewist, crafter, and owner of Make It & Love It. She is a mom of 5 and a wife to a very patient (with my craft clutter) husband. In case you’re wondering, she always chooses crafting/sewing/designing over mopping/dusting/wiping base boards……but bathrooms/laundry/full bellies are always attended to. Whew!
Author Bio Box by HOI
Author:
Ashley Johnston
Categories:
Mentions:
Not Specified
Keywords:
Not Specified
Last Updated:
June 26, 2014
Share
Pin16
Tweet
Email
16 Shares